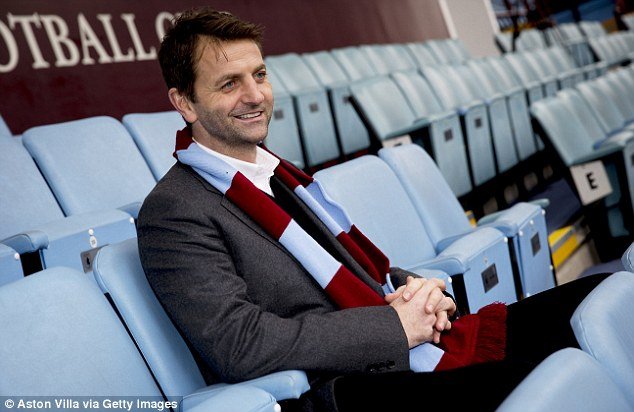 Aston Villa boss Tim Sherwood has told Sky Sports that he is confident of a successful first full season in the Midlands.

Sherwood, 46, had a brief spell in charge of Tottenham Hotspur before he was sacked by chairman Daniel Levy, despite having the best win ratio of any Spurs manager before him.

The three-time England international was out of a job for around nine months before being chosen as the successor to axed Scot Paul Lambert at Villa Park.

Former Norwich manager Lambert had left The Villains in a precarious position and was sacked after the team dropped into the relegation zone following a defeat to relegation rivals Hull City.

Sherwood took over from Lambert and steered the club to safety by three points. The highlight of Sherwood's short time in charge of the team thus far, however, was reaching the Final of the F.A. Cup, beating Liverpool and local rivals West Bromwich Albion along the way but eventually they were pushed aside by defending champions Arsenal in a 4-0 loss.

With the season now over, Sherwood seems to have one big problem and that is the future of Belgian striker Christian Benteke, who has told the club he will not be signing a new contract amid reported interest from Liverpool. 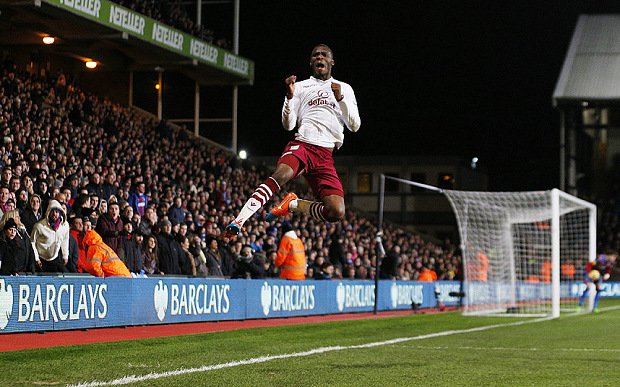 The club have already expressed that they do not wish to sell Benteke unless his £32.5m release clause is met but Sherwood has now told Sky Sports that they may come down from their asking price if a suitable replacement is found.

"In an ideal world, Christian would stay with us. But that's not looking likely right now. He is under contract for a few more years but the thing that is plaguing my mind is whether he'll be able to give his all in every game if his heart isn't really in it.

He's obviously a great player and he has ambition. We failed to meet his ambition by losing to Arsenal last year and he wants European football. His agent is looking to get him a move away from the club, and I think that it may be better to sell for a good price and bring in a striker who is capable of replacing Christian.

If we can do that then I'm confident of this season being a success for the club. I'd really like to get the situation sorted out sooner rather than later so that the club and the rest of the squad isn't affected too much."

When asked about his aims for the season, Sherwood told Sky Sports: "To finish in the top half in my first full season with Villa would be great. I think we've got the players to do that, and the new additions to the squad will really benefit us. Top half is definitely my aim and I am really confident it can be achieved if we all put the work in."

Villa have already made three signings so far during this pre-season, with Scott Sinclair, Micah Richards and Idrissa Gueye all joining the club.
Login to Quote

Feliks
5 years
Best of luck, Villa under Sherwood are looking like a promising team and hopefully you can do well with them!
Login to Quote 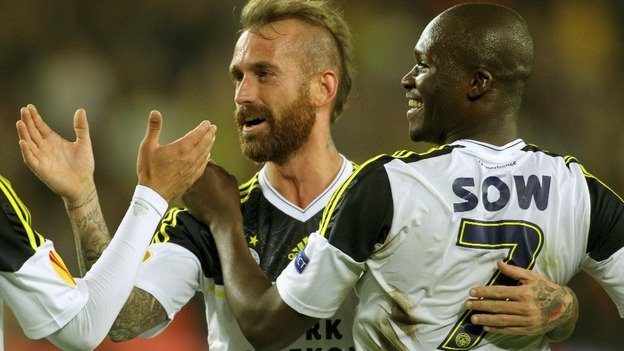 Barclays Premier League side Aston Villa are set to send Fenerbahçe offers for duo Moussa Sow and Raul Meireles, according to reports emanating from Turkey today.

If the reports are to be believed, then the link to Senegalese striker Moussa Sow could spell the end to want-away Belgian Christian Benteke's career at Villa Park.

Villa boss Tim Sherwood said last week that the club would be prepared to sell Benteke, who has been linked with a move to Liverpool, should they find a suitable replacement. And these reports claim that Sherwood has chosen Sow as the player to fill the Belgian's boots.

However, the reports also claim that the two clubs have hit a stumbling block in negotiations with the English side not wanting to pay the rumoured £8m fee that Fenerbahçe are asking for.

Neither club has commented on the speculation as of yet.

But one transfer that does seem likely is that of former Liverpool and Chelsea midfielder Raul Meireles, with the agent of the Portuguese player confirming that they were in discussions with an English team on Twitter.

"Raul is considering an offer to return to the Premier League, fee agreed between the two clubs."

A reported £500k has been accepted by Fenerbahçe and sources tell us that the club in question is indeed Aston Villa.

Meireles previously played in the Premier League at Liverpool and Chelsea before moving to Turkey for £8m.
Login to Quote

Glenn T
5 years
Ooh, interesting signings there. I always liked Meireles, hope he does well for you. Good luck with Villa!
Login to Quote

Welshy
5 years
Great start so far and indeed Meirelas and Sow would be some great signings!
Login to Quote 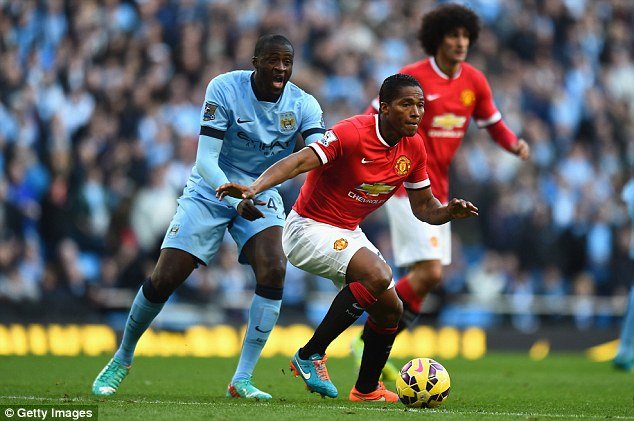 Valencia has made over 100 league appearances for United since joining from Wigan Athletic for a fee of £16m in 2009.

The winger has also been deployed at wing back during his time at Old Trafford, although fans of the Red Devils were critical of his performances while playing out of his usual position.

Generally, in fact, Valencia has struggled to gain the love of the United faithful during his five years in Manchester, and he hopes that his new fans will give him the support he needs to be a success at the Midlands club.

"I've had a bit of a tough time in Manchester," Valencia confessed to Aston Villa's official website on his first day at their Bodymoor Heath training facility. "I am really honored to have played for Manchester United. They are one of the biggest teams in the world, and because of that their fans are unforgiving. And rightly so. I still have a lot to offer despite my disappointing time at United, and with the support of the Aston Villa fans, I really think I can get back to my finest form."

Sherwood has paid a £650,000 fee to take Valencia on loan for the season and has the option to pay an additional £5.5m to make the transfer permanent at any point during the loan spell.

In other news, the Villa boss has staunchly denied any interest in signing Moussa Sow, despite being heavily linked with the striker by Turkish media.

"We're not interested in signing Sow. We're still trying to convince Christian to stay and until a solution is reached regarding his future, we won't be looking to sign another striker for the first team."

And Sherwood also confirmed that Raul Meireles will not be joining the club after the two parties failed to agree on personal terms.

"We were very interested in bringing Meireles to the club, but unfortunately we had very different opinions on how much he should be paid. That led to us cancelling negotiations with him and his agent. I wish him the best of luck wherever he is playing his football next season."
Login to Quote

Welshy
5 years
Great update again and a great signing in Valencia, he should do well!
Login to Quote

Gabby 'gutted' to pick up injury 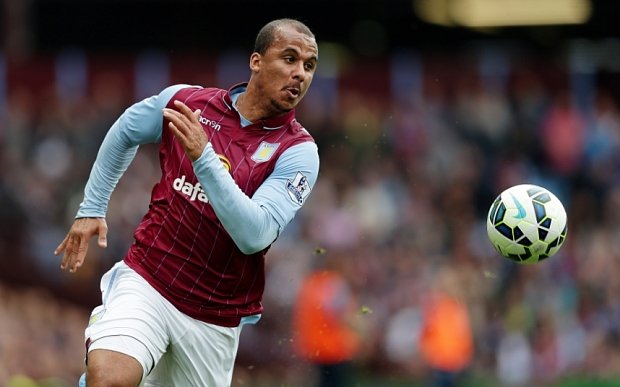 Gabriel Agbonlahor has told the club website that he is 'gutted' to be missing a large section of the 2014/2015 season.

The Villains icon had to be replaced in Saturday's 4-1 win against French side Quevilly when he went down to the ground and stayed down. Scans later confirmed that the 27-year-old had torn his calf muscle and head physio Alan Smith predicts that the pacey striker will be out for at least four months.

"Unfortunately we have to advise that Gabby is sidelined for at least four months so that we can treat his injury to the best of our capabilities. As I'm sure the fans will know, he loves playing for the club and he's really down about the news. At the moment he's in a lot of pain and it'll take him a while to get back into the swing of things."

Boss Tim Sherwood has also spoken about the injury, telling the website that it will be "tough" without the Englishman's presence on the pitch.

"Gabby is a key player and it's going to be really tough to reshape now that he's picked up this injury. I've spoken with him and the physio team here and at the moment it's not looking good.

Christian [Benteke] is still a wanted man but I think I might have to put his plans of a move on hold because we're going to need all the help we can get now."

Agbonlahor started his career at Villa Park and has gone on to make over 250 league appearances for the club and win three caps for the England team.

Gabby has spoken of his sadness that he will not be able to play for the team at the start of the season.

"It's a sad time for me. I'm gutted. The first few months of the season are normally so important and I am really disappointed that I'm not able to help the team out.

I'm going to be working really hard with the physiotherapists and I hope to be back in training soon. Tim has told me that I'll be playing regularly when I come back and that's the one thing that I'm looking forward to."
Login to Quote

Welshy
5 years
Big shame there, the show must go on though!
Login to Quote

Aston Villa capture Belgian winger, send him straight back out on loan Barclays Premier League side Aston Villa have announced the signing of 21-year-old winger Dorian Klonaridis, who joins on a three year contract from Greek club Panathinaikos.

However, Klonaridis will join up with Panathinaikos again next season as part of the transfer agreement, which sees the Belgian return to Greece for the 2014/2015 season.

The left sided winger is not yet capped by his national side, though he has won one cap at U20 level, but he is eligible to play for Greece through his father's Greek nationality.

Klonaridis' key attribute is his pace, which he has used on more than one occasion to beat his opponent.

Villa manager Tim Sherwood is excited about the future of the former AEK and Lille player. "Dorian is an exciting little player and I think he'll definitely be a part of the future of this club. We were slightly reluctant to see him going back out on loan but unfortunately that was the only way we could reach an agreement with Panathinaikos, which demonstrates his importance to them."

Aston Villa had also been linked with a move for Belgian striker Michael Lallemand, although talks with Proximus League outfit Eupen are thought to have broken down, with sources claiming that the 21-year-old was not prepared to return to the club on loan as part of the deal. 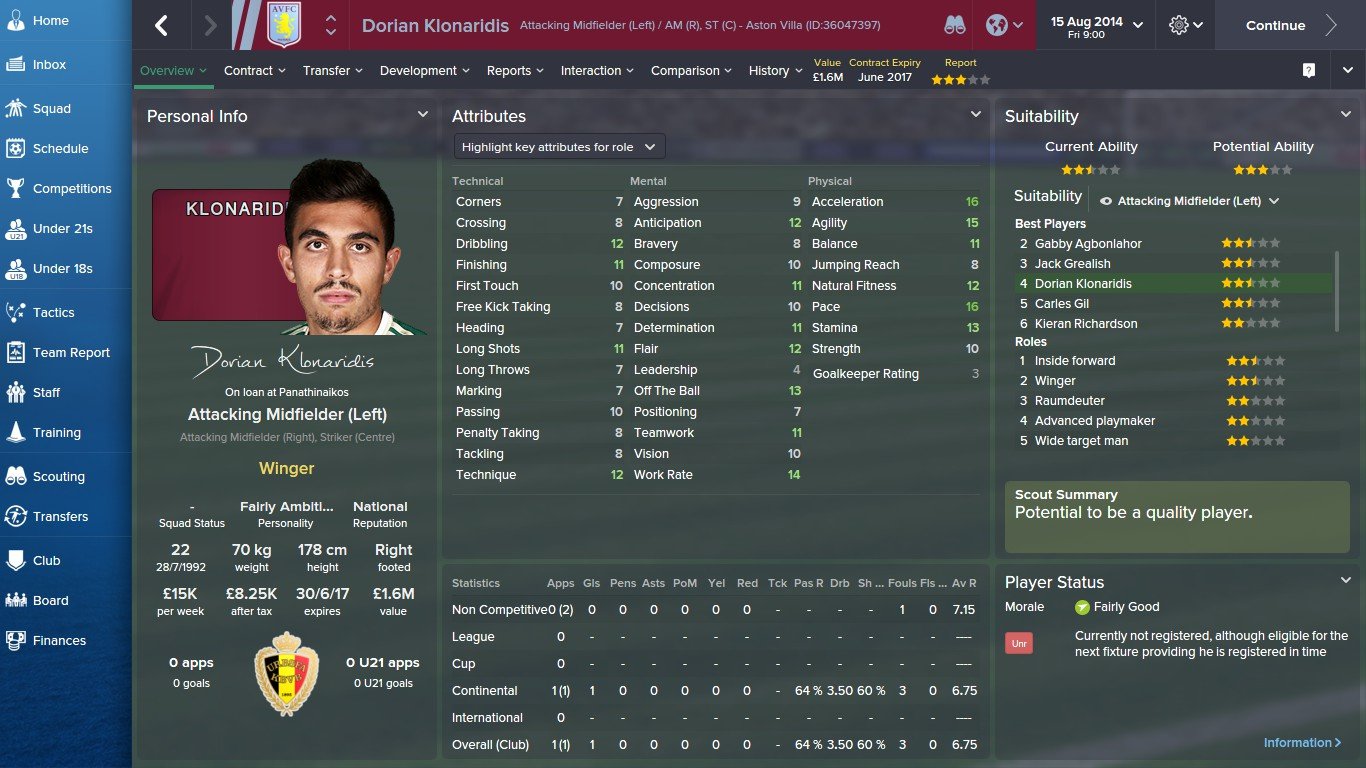 your writing is amazing as ever mate, keep it up!
Login to Quote 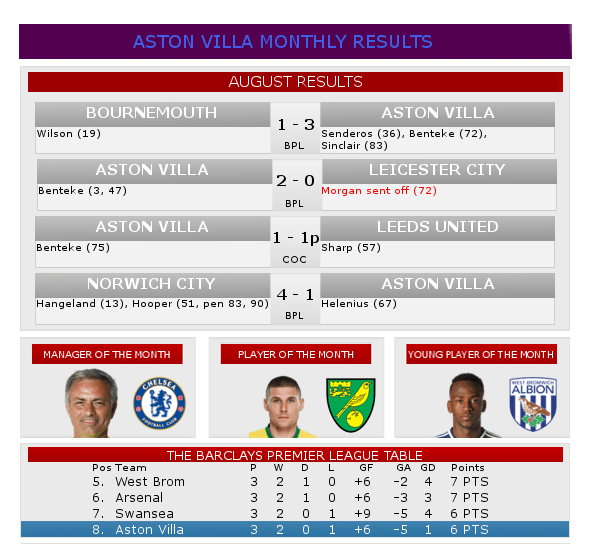