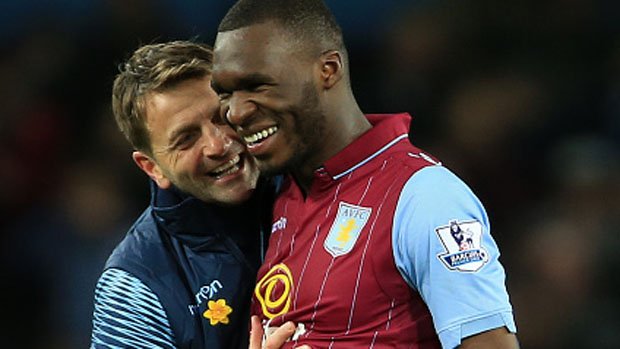 The interview was conducted after the transfer window slammed shut last night with Villa fans hearing the news that the 23-year-old would be staying in the Midlands for the foreseeable future.

Sources understand that Premier League side Liverpool, who were the favourites to sign the striker, did not table a bid for the former Genk man and Sherwood has now confirmed that Benteke is happy to stay with The Villains because of this.

Official bids from Napoli and AS Monaco were rejected by Aston Villa as they did not meet Sherwood's £23m valuation of the strong striker. The bids were thought to be in the region of £13m and £18m which both fell some way short of Villa's asking price.

Benteke, who picked up a minor injury in Aston Villa's Capital One Cup defeat to Leeds United, has scored four goals so far this term for his team in all competitions, with just three games played.

"I'll admit we're all relieved that Christian is still here. He obviously has ambition but this club has a lot of history and I really do believe that we can help him meet his ambition with this team in the near future.

Clearly he's very important to the team, and he's demonstrated that early on so far this season. He missed the loss against Norwich but with the international break coming up, he'll be back before the Stoke game.

He is still happy at this club. We've talked in great length over the past few weeks and he is going to give his all for us in this season. We want to keep him here for longer than that but we'll revisit the situation in the summer if he wishes to. For now, the matter is over as far as we're concerned."
Login to Quote

Grealish opts for Ireland after O'Neill call up 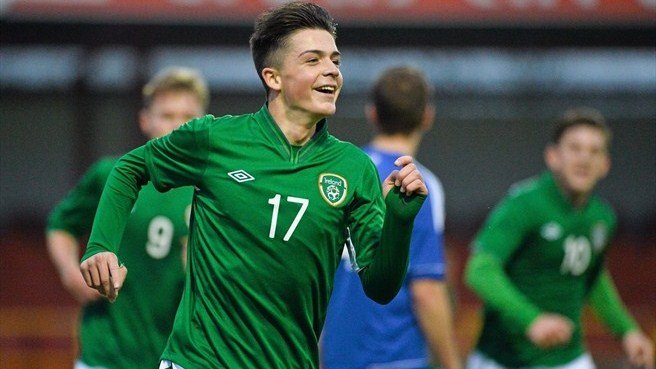 Aston Villa winger Jack Grealish has opted to play for the Irish national team after being called up to the senior squad by Martin O'Neill.

Former Villa boss O'Neill decided to bring the 19-year-old into the team to face Romania and Scotland, and Grealish made his international debut for Ireland as a started as they beat Romania 2-1 in a friendly, before being subbed off for Sunderland's Will Buckley in the 75th minute.

Five days later he made his competitive debut, starting on the left wing for Ireland in their Euro 2016 Group D qualifier match away to Scotland, where they lost 3-0.

This brings to an end any hope that England fans and officials had of the English-born youngster playing for their national side and Grealish has explained why he chose to play for Ireland.

"Ireland can offer me more opportunities than England are able to. They've got a very good squad," he told Aston Villa's official website. "I'm honored that English people did want me to play for them, but I am delighted that Martin has given me this chance. I was given opportunities at youth level for Ireland and that's certainly helped my development as a player, so I feel as though I owe them something."
Login to Quote

Welshy
4 years
A very wise choice from Grealish and fantastic to see you keeping hold of Benteke!
Login to Quote

Jer
4 years
Nice to see that you started a story! Some astute signings!
Login to Quote

Jer
4 years
Man U rekt u
Login to Quote 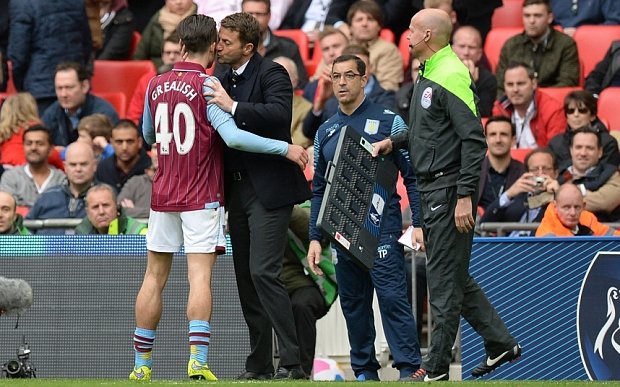 With the news that our very exciting academy product Jack Grealish has gone to Millwall for another loan spell, boss Tim Sherwood has revealed what he plans to do with the recently capped Irishman upon his return.

Grealish, 19, spent last season out on loan at Notts County where he scored five goals for the League One club.

Millwall also play their football in the same division as Notts County after being relegated from the Sky Bet Championship last season. Millwall manager Neil Harris has promised Villa fans that Grealish will be playing regularly for The Lions, despite the loan agreement only initially lasting for one month.

"We wanted to give Jack a trial run before committing to any long term loan. Tim Sherwood also wanted to see how well Jack does in this month because I think the plan in the Midlands is for Jack to be in and around the first team when he goes back there.

He'll definitely be getting a lot of football while he's with us though so Villa fans shouldn't worry about his development stalling. He's recently been called up to the Ireland team which is a fantastic feat for such a young man and I hope that he's going to be a big hit here."

And so far Grealish has proved to be exactly that. Given three starts in the first team so far, Jack has scored once and provided three assists for his new team-mates. According to WhoScored.com, he currently hold a 8.17 average rating.

Tim Sherwood has revealed to the club website that Grealish will be challenging Scott Sinclair for a place in the first team upon his return, and believes the Irishman is good enough to hold a place.

"We want Jack playing for this team as soon as possible. It's our hope that he'll do well for Millwall and come back after the month out and challenge Scott. I think he's good enough to do that, definitely. I don't think there's too much difference between them in ability right now.

And that's no disrespect to Scott, who has been a solid player in his early days here. If anything that's a compliment to him. Jack is one of the most talked about youngsters and I am very excited to be able to use him soon."
Login to Quote

Tellak
4 years
U got this.
Login to Quote 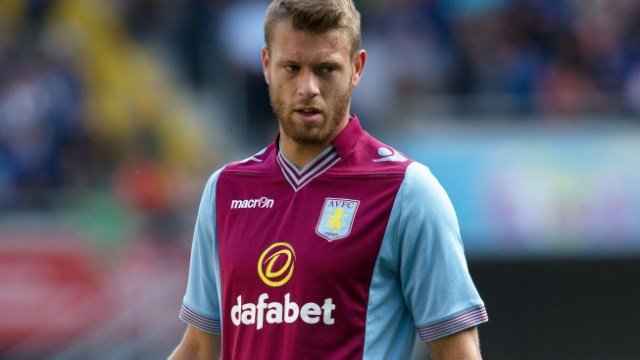 Aston Villa defender Nathan Baker, 23, has publicly criticized Villains manager Tim Sherwood's decision to fine him after he was sent off in their 4-0 defeat to Southampton earlier this month.

The Englishman was shocked at Sherwood's decision to fine him one weeks wages which comes to just under £18,000. Baker says he could not believe the pettiness of Sherwood to make such a decision, especially since the side were already 3-0 down before his 75th minute walk of shame.

"Tim has been so petty with his decision to fine me. It's not so much about the money, it's about his reasoning behind the decision.

I don't feel particularly coming out and talking to the press like this, but the fans should know that these comments are directed at Tim and not at the club.

It does look like my time here is at an end and if that is the case I want to thank the fans for their incredible support, right from the very beginning of my time here."
Baker, along with Irish centre back Ciaran Clark, has been deployed as backup to Jores Okore and Phillipe Senderos often this season and has only played four games of Villa's thirteen in the Barclays Premier League.

The Villa youth product does have undeniable 'potential' however, according to the apparently war-mongering Tim Sherwood.

"It's a shame Nathan's decided to act like this. I've explained my decision time and time again to him. The rest of the lads understand and for him to take this issue to the press is just unprofessional on his behalf.

Things were bad enough as they were before he went and got himself sent off, and he just looked uninterested in playing for the team when he carelessly lunged in to pick up his second yellow.

Yeah, it is a shame because the lad has such potential and I really had hoped he would be able to fulfill the potential here at Aston Villa. That isn't looking likely now though and I'm unfortunately looking at moving Nathan on."

Meanwhile Jack Grealish has returned from his loan spell at Millwall and was straight into the team for their 2-1 win over West Ham in late November.
Login to Quote 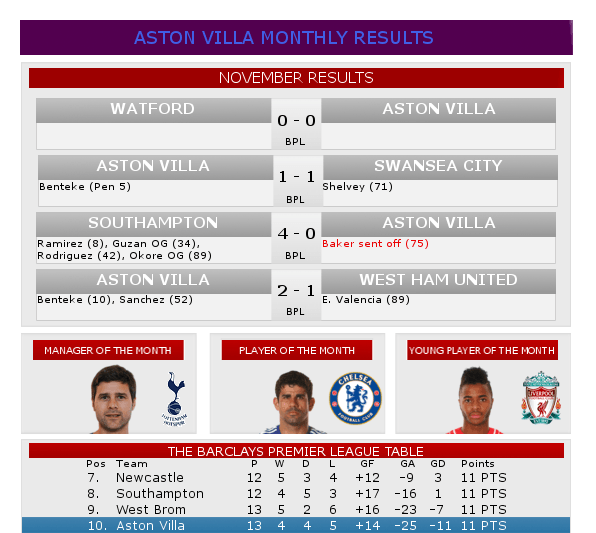 Your monthly graphic update is class!
Login to Quote

Sherwood extends Villa stay through to 2017 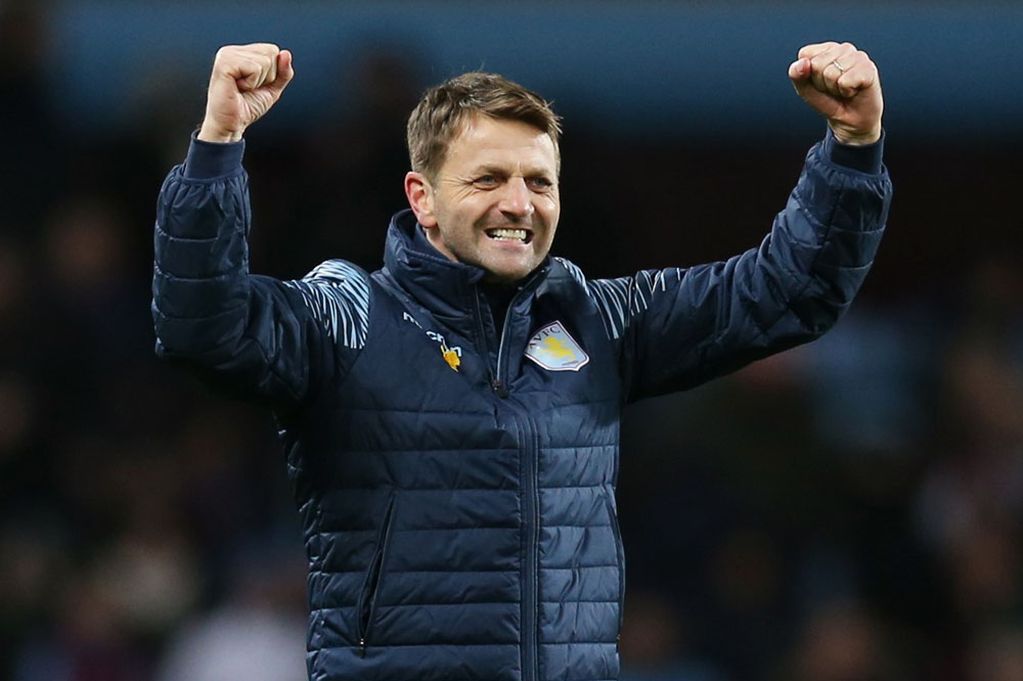 Aston Villa manager Tim Sherwood has received a boost over the festive period as Randy Lerner has handed the English boss a new three year deal which sees him tied to the club until 2017.

Sherwood took over from the sacked Paul Lambert last season and steered Villa to safety, as well as taking them to the F.A. Cup Final where they lost out to Arsenal.

This season, The Villains have had a steady start and sit in 13th place after 19 games, despite heavy losses to the likes of Southampton and Manchester United.

The former Spurs manager is unimpressed with the standing of his team, however, and has criticized Nathan Baker once again.

"I'm really happy to have signed a new contract but we need to put a lot of work in between now and the end of the season. At the minute, I'm not at all happy with our position. We're better than this and we know it.

It's important to have a happy squad and for the most part I've got that. But Nathan is just bringing everyone down. I've sent him to the reserves. He's been skipping training without permission and it's just extremely unprofessional from the lad. It's a shame because he is a lovely guy outside of football.

He picked up another red card in the derby game against West Brom and that sent us downhill pretty fast. We were on track for at least a point at The Hawthorns before that. I just don't know if we're going to be able to sell him because his attitude is appalling and other clubs will surely have seen that."

Chairman Randy Lerner has also announced that he is in discussions with a businessman to sell the club and expects to have news in the next few weeks.
Login to Quote