Feliks
6 years
That is what you want to see in your inbox!
Login to Quote 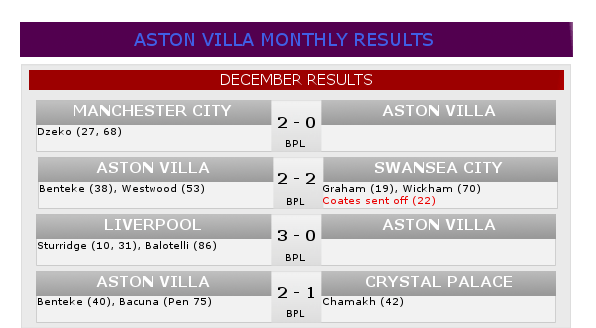 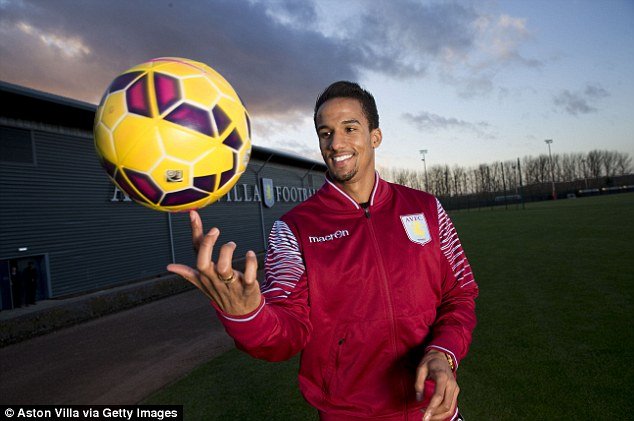 Aston Villa's hopes of reaching the F.A. Cup final for the second time in two seasons remain very much alive after The Villains came from behind to knock a young Manchester City out of the tournament.

Manuel Pellegrini had fielded an inexperienced side against Hull City in the previous round where a goal from 19-year-old Frenchman Oliver Ntcham scraped them through to the tie at Villa Park, but his decision came back to bite him this time around as Villa capitalized on the young Citizens weaknesses to earn a place in the 5th round.


City kicked off proceedings on a sunny day at Villa Park and took the opportunity to field some of their younger players in the match against Tim Sherwood's squad, who had beaten League One side Crewe Alexandra to reach this stage of the competition. Sherwood also opted to start 19-year-old Irishman Jack Grealish who had been featuring regularly for the Villa side in the league prior to the game.

The match started quietly but just before the half hour mark it looked as though Manuel Pellegrini's decision to start a young lineup had paid off when Samir Nasri's cross into the Villa area resulted in a goalmouth scramble. Enes Ünal, 17, eventually forced Danish defender Jores Okore into scoring an own goal as the pressure from the young Turk was too much for the former Nordsjælland centre back to handle.

Okore went some way to redeeming his mistake minutes later when he superbly blocked Pablo Zabaleta's powerful shot at Brad Guzan's goal with his outstretched leg. The half time whistle blew with City arguably the much better side.

Sherwood decided to bring former City winger Scott Sinclair on in place of the young Grealish at half time - the second time he had played against his old team since making his move to Villa permanent in the summer. Villa captain Gabby Agbonlahor also came on in place of loanee Antonio Valencia.

It was Fabian Delph who made the headlines for his second half display however. Villa equalized after 69 minutes when Ashley Westwood's free-kick found Delph. The central midfielder controlled it well before playing a perfect pass to the former City man Sinclair, who drilled the ball low and across goal to find the bottom corner of Willy Caballero's net.

Delph also had a part to play in Aston Villa's winner, winning the ball back from Zabaleta and knocking it forward to Carles Gil. Gil found Sinclair with a short pass and he played a ball through to Benteke just inside the area. The big Belgian forward poked a ball out wide to Sinclair's fellow substitute Gabby Agbonlahor and the pacey captain found the top corner of the City net to secure Villa's place in the 5th round. 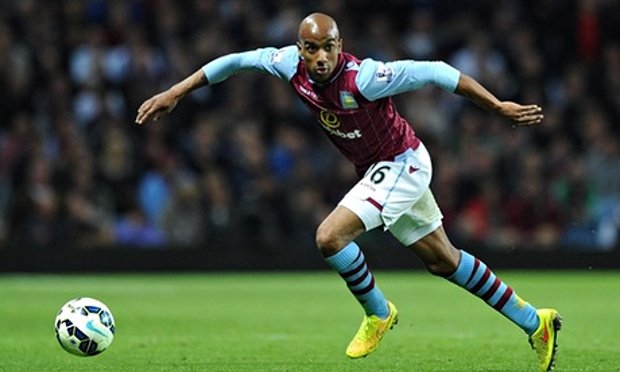 Aston Villa's American international goalkeeper Brad Guzan reserved some special praise for both Man of the Match Fabian Delph and for manager Tim Sherwood's tactical alterations at half time.

"What a win!" Guzan exclaimed in a pitch side interview immediately after the game. "The whole squad just looked brilliant after the half time break. Fabian is made up to have helped the team into the next round. Brilliant performance all round from everyone but Fabian really upped his game after the interval and credit has to go to him for that. He was an absolute work horse.

Tim also deserves a lot of credit. Really, it's his decisions that have won us the game. If he hadn't brought Scott and Gabby on when he did, would we have won? I'm not sure. He really got everyone motivated as well at half time. He really believes in this team and we're all really grateful for his faith in us."

Aston Villa will face Newcastle United at St James' Park in the next round of the F.A. Cup.
Login to Quote 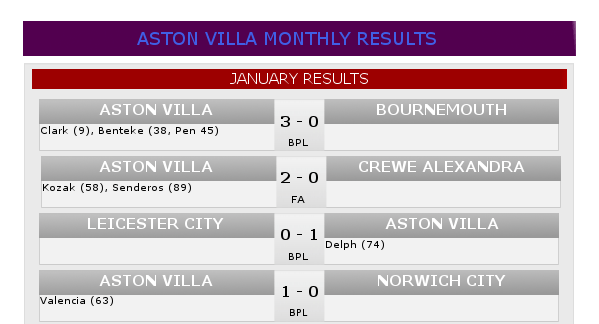 Welshy
6 years
Much better month to some of the previous ones and great result in the F.A. Cup.
Login to Quote 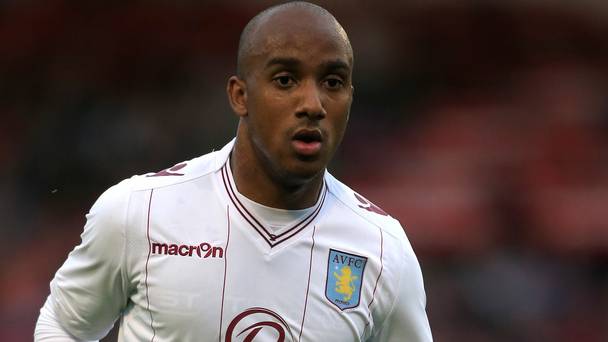 In an interview with www.avfc.co.uk, new captain Fabian Delph has spoken of his delight at his recent from which culminated in him winning the Barclays Premier League Player of the Month award.

Delph replaced Gabby Agbonlahor as captain last month due to the part he played in a number of inspirational wins, including Villa's 2-1 victory over Manchester City in the F.A. Cup.

The midfielder, who signed a long-term contract extension last summer, was named as the official Man of the Match for three consecutive games in January as The Villains picked up wins over Leicester, Norwich and Manchester City.

His fine form resulted in some official interest from bigger clubs including Liverpool, Tottenham and Manchester United, but no official bid was made, and Delph claims he was all set to reject any offers that came in for him.

"I'm loving it here. I'm really happy with the way I've been playing because it's been benefiting the team and we've been winning games.

The Player of the Month award is a brilliant personal achievement for me and the rest of the team and my family are completely made up for me.

My agent had some unofficial talks with some representatives of some other clubs in the league, as it was reported. But my heart is here. I've not long signed a new contract and I want to be playing here. Nowhere else."

Asked about his thoughts on replacing Gabby Agbonlahor as club captain, Delph said: "Another unimaginable honor for me. Gabby's well loved by the fans and he's happy for me that I've taken his role as captain. Tim sat me, Gabby and Brad down and explained the decision to us in-depth. Everyone's happy."
Login to Quote

Glenn T
6 years
Brilliant win over City, gl with climbing further up the table. I've had some good memories with Delph myself, was vice-captain of my Aston Villa team back in FM13 and he was an amazing player.

Tellak
6 years
Man City ain't got nothing on you.
Login to Quote 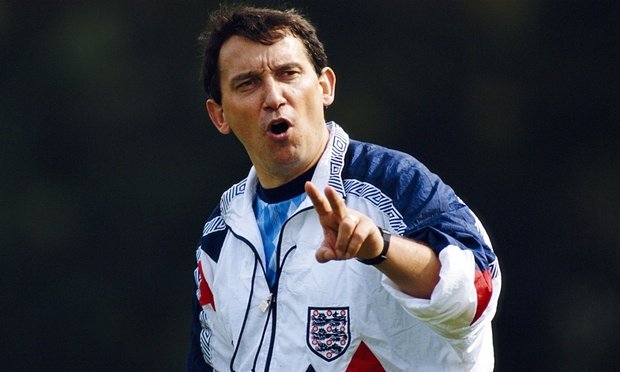 Former England and Aston Villa manager Graham Taylor has confirmed his takeover of his former club this evening as he replaces Randy Lerner as club chairman.

Taylor has led a consortium into the purchase of the club and is looking to make big changes. Sky sources understand that current boss Tim Sherwood's future at the club is in doubt with Taylor's arrival. We also understand that the failed England manager is lining up ex-Blackpool and Crystal Palace chief Ian Holloway to replace Sherwood.

It seems odd, perhaps, that Taylor's first real decision as chairman of the club is to potentially sack a manager who has already guided them to within three points of their total points tally for last season, with plenty of time to spare. Sherwood's side currently sit in 11th place in the Barclays Premier League, which is a steady position according to former Villains boss and current Ireland coach Martin O'Neill.

"Tim's doing a very good job at Aston Villa if you ask me. He's had a few problems in the early stages of his time at the club and I think he's dealt with them well. To be sat in 11th is a good, steady start for him in his first full season with them and I really think Graham ought to give him more of a chance."

Unemployed Ian Holloway refused to comment on the speculation, but the manager, who was sacked for the first time in his managerial career last season as Millwall edged closer to relegation, doesn't seem like a step up from Sherwood considering his record in the Premier League.
Login to Quote 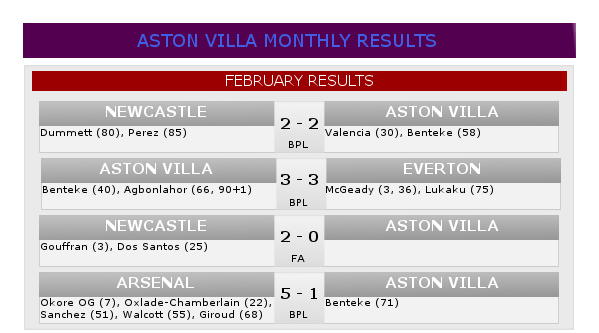 Tellak
6 years
Mate u are killing me with these updates.