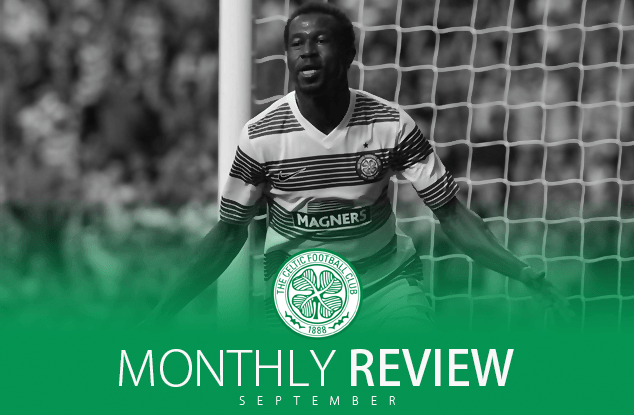 Celtic’s season got into full swing during the month of September, which saw them play a total of six games – three Premiership matches, two Champions League outings and League Cup tie.

Celtic kicked off the month with an away game to Inverness, before travelling to Germany to play Wolfsburg. An away trip to Aberdeen – possibly the Bhoys biggest competitor for the title – followed. Cowdenbeath then started the three successive home games for Celtic, with Partick Thistle and Altetico Madrid visiting Glasgow to end the month. 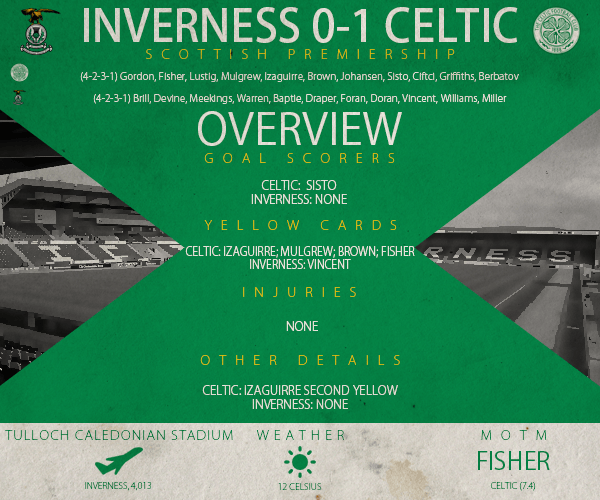 Celtic’s month started with what turned out to be a tough encounter for the Bhoys, with Inverness playing very well to restrict Celtic. Things went from bad to worse for Celtic eighteen minutes in, when Izaguirre earned himself a second yellow. Despite the poor showing, Celtic found the breakthrough twenty minutes from time, through Pione Sisto, who put the ball into the back of the net. 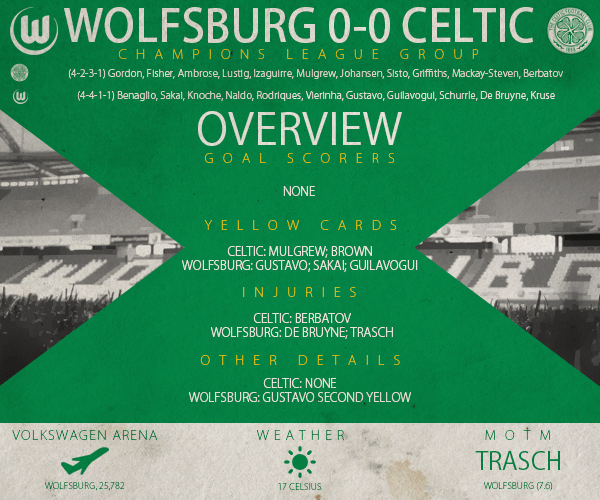 The Volkswagen Arena witnessed a rather tactical and cagey game – often typical of the open European night – in the encounter between Celtic and Wolfsburg. The main talking point is the physical nature of the game – with many bookings and severe injuries involved. Luiz Gustavo was the main culprit for Wolfsburg, earning himself an early bath eighteen minutes in. Celtic picked up two bookings, and Wolfsburg three. Dimitar Berbatov suffered a broken leg as a result from a challenge, Wolfsburg’s Kevin De Bruyne tore his hamstring and Trasch took a severe knock that ended his Man of the Match performance. This game would be looked as one of the most pivotal in the campaign for both sides, and as expected, Celtic came out on top; although, it was not easy for the Bhoys, with Rooney putting Aberdeen ahead before half time. But, in added time, Boyata popped up to level out the score. Kris Commons then gave Celtic the lead after the break with a fantastic long shot, which was deserved of sealing the all-important win for the Bhoys. Charlie Mulgrew then netted a freekick to give Celtic surely all the three points. 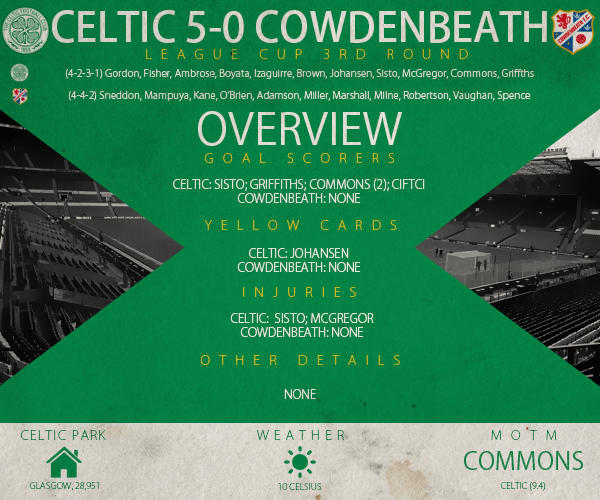 Next up for the Bhoys was a cup game against Cowdenbeath, who play their trade in League One. Things started well for Celtic, with the team regularly threatening 17 year old Jaime Sneddon’s goal. Pione Sisto put the Glaswegians one up inside ten minutes, with Leigh Griffiths adding another seven minutes later. Almost straight from the kickoff, Celtic managed to get another goal, with Kris Commons netting a rebound. Ten mintues from the half-time whistle, Commons added another, with another stunning strike – his second in as many games. Turk Nadir Ciftci then added a fifth deep into the second half – his first goal for the club. 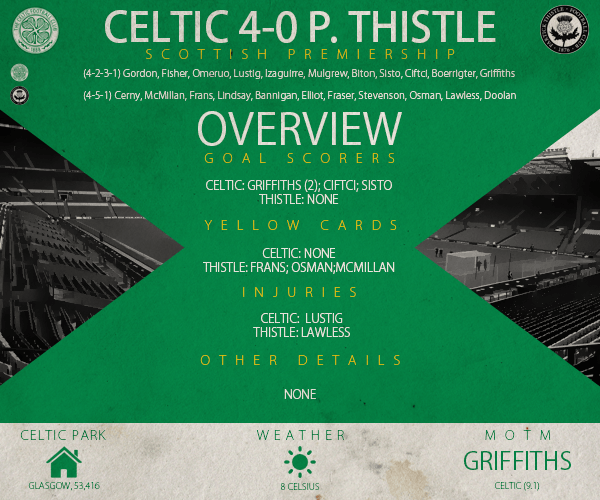 The three successive games at Celtic Park started with a visit from Partick Thistle. Things started well for Deila’s men, and it took thirteen minutes for Griffiths to find the back of the net. It wasn’t until deep into the second half that Celtic got their next goal, however, with Nadir Ciftci picking up where he left off, scoring a stunner. Griffiths then got his second, and in added time Sisto scored to make it four. 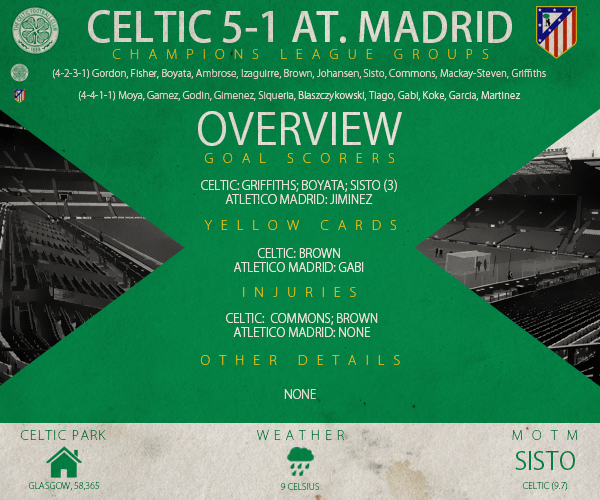 Despite playing at home, Celtic came into the game as huge underdogs – but that didn’t seem to bother the Bhoys, with Griffiths putting his side ahead after just two minutes of play. Much to Atletico fan’s surprise, their team found themselves two down after six minutes, with Dedryck Boyata getting the goal. Sisto bagged a brace just before the half-time whistle too, one goal coming fourty-four minutes in, and the next in added time, making the break miserable for the away fans, with their side unexpectedly four down. It took just five minutes after the break for Celtic to net their fifth, with Sisto getting the match ball after scoring a hattrick. Raul Jiminez, however, pulled one back for the side from Madrid, but it was nothing more than a consolation, as the chance of a comeback was ruled out a long time ago. Despite winning unexpectedly, injuries to Kris Commons -and Scott Brown left a nasty shadow over the game.

After eight games, Celtic sit top of the Premiership, still having not lost, and therefore having the maximum amount of points available – a grand total of 24. Having scored 27, and only conceded 4, it gives the Bhoys a very healthy goal difference of +23.

In Group G, Celtic also sit top, on four points, having drawn one and won one. Having scored five, and conceded one, it gives themselves a goal difference of +4. They sit two points ahead of second placed Zenit and Wolfsburg, with the two separated by goal difference, and Atletico – the favourites for the groups – languish in last place on one single point. 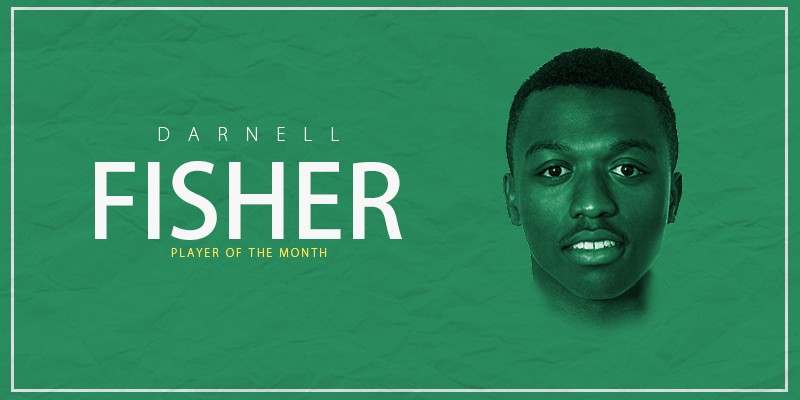 This month’s player of the month is right back Darnell Fisher. The 20 year old has shown real consistency and awareness beyond his years this month, and has become a mainstay in Celtic’s backline, dislodging Lustig from his perch. The award could have also gone to Sisto, who has been world class this month, but Fisher’s consistency gave him the edge.

Next month sees Celtic play another five games – three in the Premiership, one in the Champions League and a cup tie against old rivals Rangers.

They start the month with a visit from Hearts, before travelling to Dundee. Zenit then face the gruelling trip to Celtic Park. Celtic then pit themselves against Hamilton Academical away from home, before playing the Old Firm derby in the League Cup Quarter Finals at Celtic Park to round off the month.
This will be my last update for a week, as I am going on holiday – so enjoy and have a good week people

thewayofeverything
6 years
A very nice start in the Champions League Group. 4 Points can see you in the qualification spot instead of only the Europa League, since a team like atletico only have 1 pt from 2 games. Win at home, draw away and u will be fine mate.
Login to Quote

An expected brilliant start to the league, and a great win against Atletico. You better win the Champions League

TaroMisaki
6 years
Amazing as always and as I said you clearly can qualify from that Champions League group!
Login to Quote

Math is is a bit wrong mate
Login to Quote

squirmy420
6 years
Holy wow, what a read through. The graphics alone are enough to stagger the mind. Brilliant story.
Login to Quote

Jer
6 years
how did you manage the 5-1 win against atleti?
Login to Quote

Tallery
6 years
@blitzkriegblue: Its going to be tough, but I think I'll be able to do it!
@AlexTHFC: How dare you accuse me of such a crime!
@Seanpaul67: It does, with the added Rangers game

@TaroMisaki: I certainly can, although I would like a Europa spot ideally, as we could win that when Berbatov and Insigne come back and if we carry on our form
@Maximus: The game was like watching Australia in the Ashes

@Ta31_a: All corrected now, but had the right digits

@squirmy420: Glad you enjoyed it. Comments like that make me want to write even me!
@Jer: I'm not sure... as I said, it was like Oz in the Ashes - us English can't believe it still!
@mo_123: A brilliant month, yes - was very pleased myself

The influx of staff, who are all fitness coaches and physiotherapists, comes after the sackings of long serving medical staff Williamson, McCarthy and Coll a week ago. The new medical team has lots of experience, and boasts a total of over 58 years’ in football.

Manager Ronny Deila said he was very pleased that ‘people with such experience joined the team’ and was ‘looking forward to seeing the results from their additions’.


37 year old Chris Moseley is the new Head Physio, with Alex Dalton, Jochen De Coene and David Fevre making up the rest of the team. Jan-Arend Vredeveld and Massimo Neri are the club’s new Fitness Coaches.

Moseley joined from Championship side Middlesbrough, where he had been working since 2001, first as an Under 18s Physio and as Head Physio before he joined Celtic. He had also previously worked for Stoke City until his move to Middlesbrough.

Fellow Englishman Alex Dalton is the least experienced member of the new physio team, starting his career with Scunthorpe United in 2003. He stayed with the Iron for nine years, before taking up the position of Head Physio at Doncaster Rovers in 2012 before moving to Celtic.

Belgian De Coene has joined from his home country, having been at Anderlecht since 2009, where he worked as Head Physio. He had previously worked for Chinese side Shanghai Shenhua, where he worked for six years. Prior to that, he had worked from KAA Gent, where he stayed five years – starting in 1998.

David Fevre, the most experienced and reputable member of the new backroom team, started his career in 1994, being employed as a Physio under Sir Alex Ferguson in 1994. He stayed at the Red Devils for five years, moving on to become Head Physio at Blackburn Rovers in 1999. He stayed with the Lancashire club for a grand 16 years, becoming a club legend and one of the best Physio’s in football.

Dutchman Jan-Arend Vredeveld joined Celtic from Dutch side FC Groningen. This was his only job prior to joining the Bhoys, having been appointed in 2005.

Italian Massimo Neri has also joined the team, and is the only new acquisition that was previously unemployed before joining Celtic. Despite this, he has a wealth of experience, having started his coaching career with Leece in 1985. He then moved to Roma in 2001, before working for Juventus between 2004 and 2006. He then worked at Real Madrid for a season, before becoming an England coach under compatriot Fabio Capello, who had worked with since his Roma days. He then joined Capello as a coach for the Russian National Team, but left his job when Capello was sacked his summer.
Login to Quote

squirmy420
6 years
So much work goes into each one of these posts it's incredible. Love this story.
Login to Quote

TaroMisaki
6 years
hopefully you don't need to fire them!
Login to Quote

InvertedWingbacks
6 years
hopefully they'll sort your injury crisis for you!
Login to Quote