Griffo
6 years
Great return on him!
Login to Quote 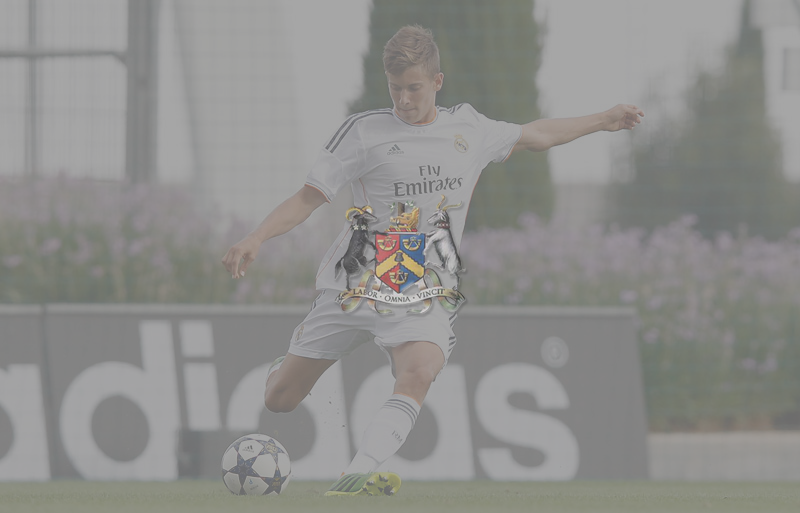 Bradford Park Avenue have announced the loan signing of Real Madrid wonderkid Marcos Llorente on a loan deal until the end of the season.

With the arrival of Carabina and departure of Kim Myung-Hoon, Avenue agree their second signing of the transfer window with the Spaniard's temporary arrival at The Shay.

Bradford will only have to pay 20% (£1,200) of his £6,000 contract which is paid at the Santiago Bernabeu of the midfielders' wages for the duration of his loan in West Yorkshire.

Although only 24 years old, he will celebrate his 25th birthday in England with his new teammates as well as family who will fly over to Leeds-Bradford Airport days before, as confirmed by the man himself.

Valued at £10,500,000 by the 11-time winners of the UEFA Champions League, a permanent deal for the Real Madrid player was out of the question for the Championship club, who currently lie in second place after a 4-1 win over Sunderland at the weekend.

Adam Chabukiani has commented on his new loan signing to the press today:


I'm delighted to bring Mr Llorente to the club today. I am happy to be able to say that we and Real Madrid's officials were professional and great people to work with in regards to this transfer. Marcos is the kind of player that we need here to take us further up the table and he will be straight into my starting eleven for the upcoming game.
My only regret with this transfer is that it isn't a permanent deal because to possess a player of Marcos' calibre is a luxury no doubt, as he seems a great young lad and a terrific player.


Llorente joins the club for the next six months as Bradford Park Avenue chase promotion the top-flight of English football.
Login to Quote

mgriffin2012
6 years
Another fantastic piece of business mate, keep it up and you're going to have a Premier League quality squad at your disposal!
Login to Quote


Cheers mate! I'm delighted to have got him on loan and I will certainly keep an eye on him for if we do make it into the Premier League 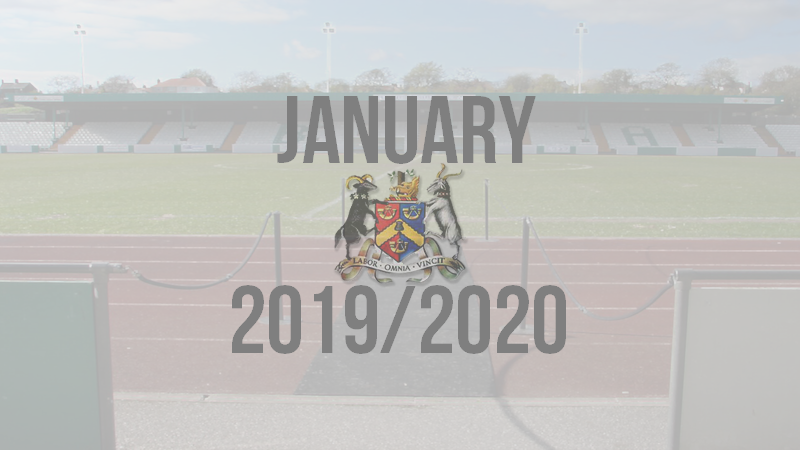 It's been a delightful start to the new year as we won four of our six games this January, including two games in the F.A. Cup against Plymouth Argyle and Birmigham City on a Replay. In the Fifth Round we will play against Premier League giants Chelsea at Stamford Bridge just two days before we arrive back home at Horsfall Stadium after spending all season at The Shay, owned by the Halifax council.

We have recruited two new players during January in Carabina and Marcos Llorente, who I think are both wonderful talents for the season. Kim Myung-Hoon is our only permanent departure, with Andre Grant moving to Leyton Orient in our only temporary departure this winter. 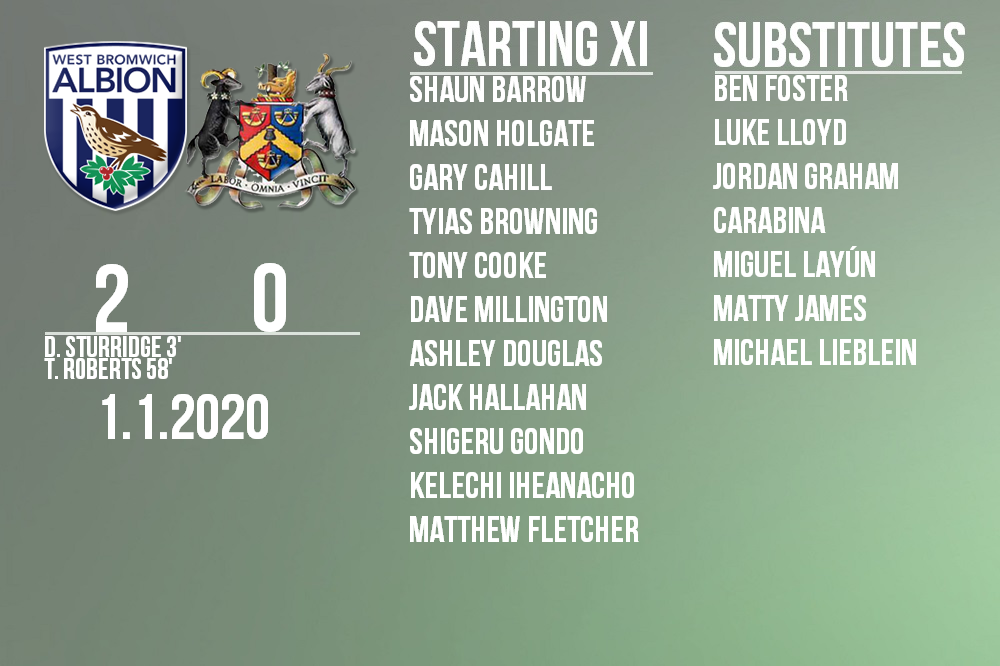 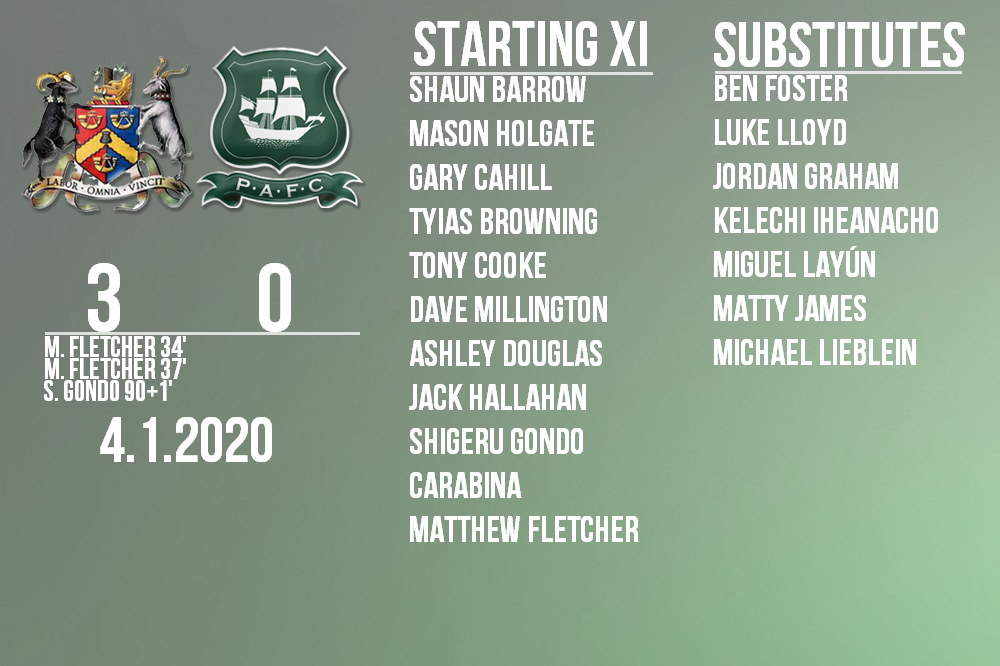 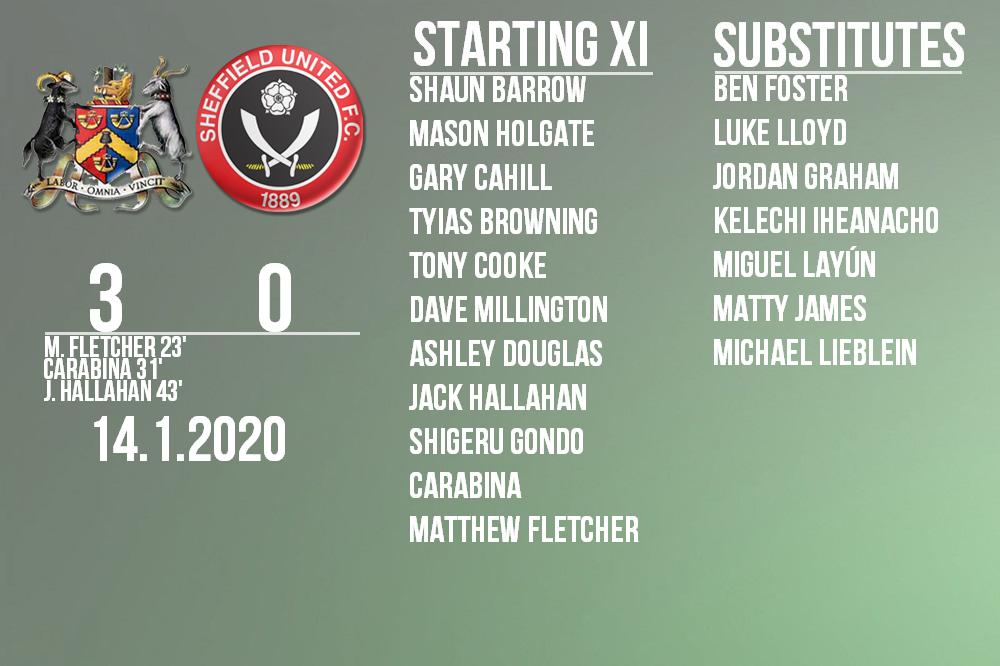 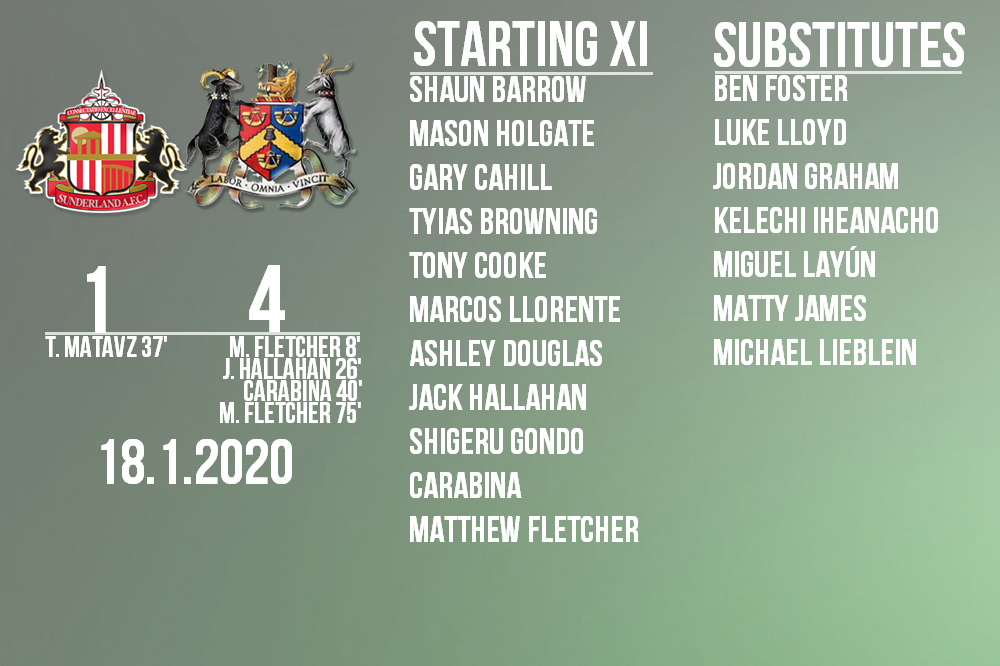 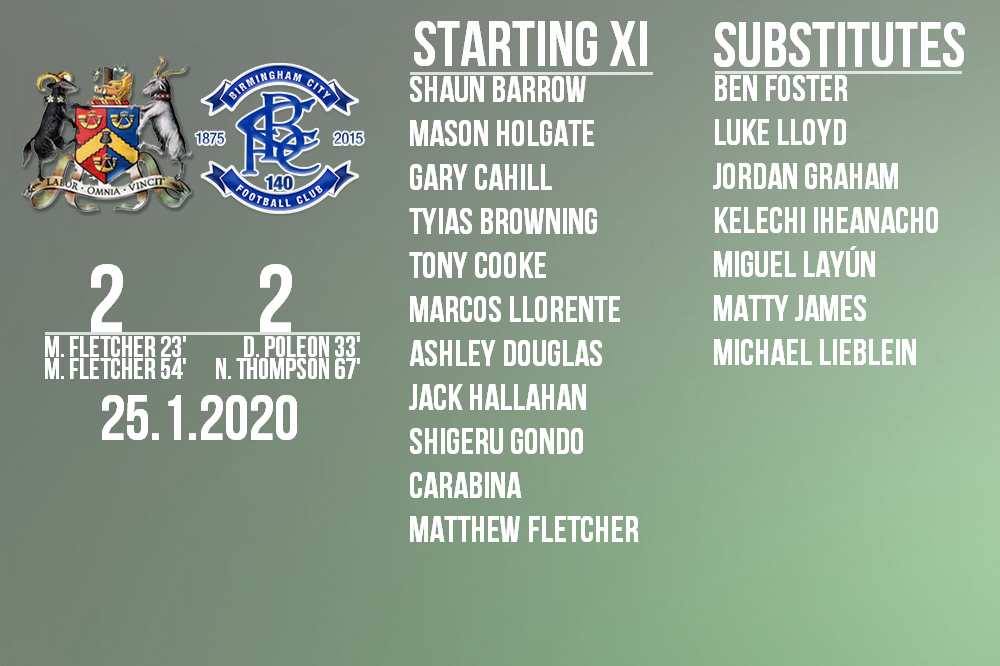 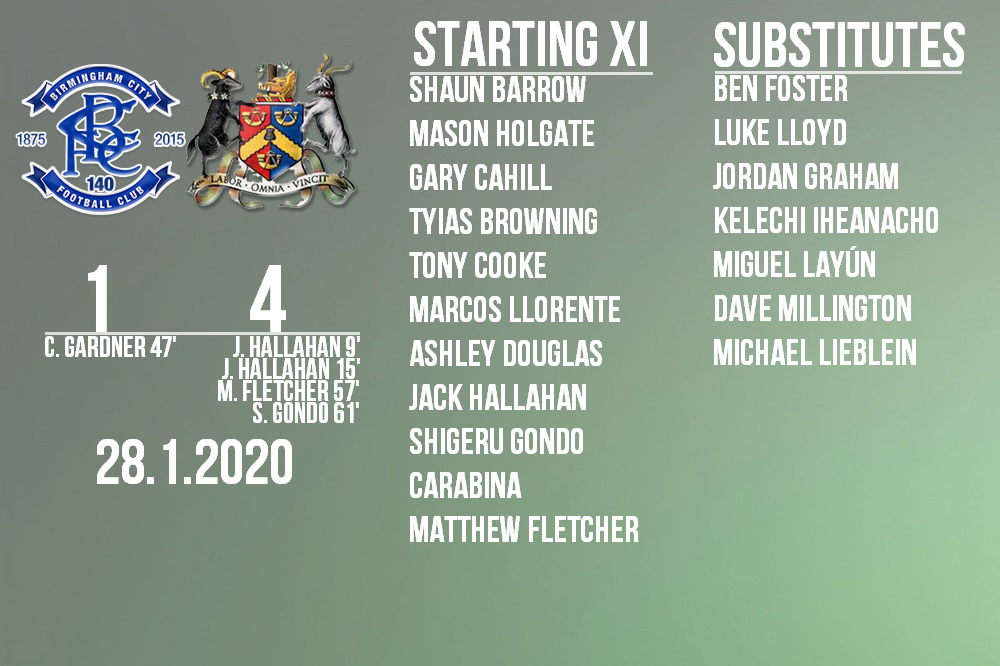 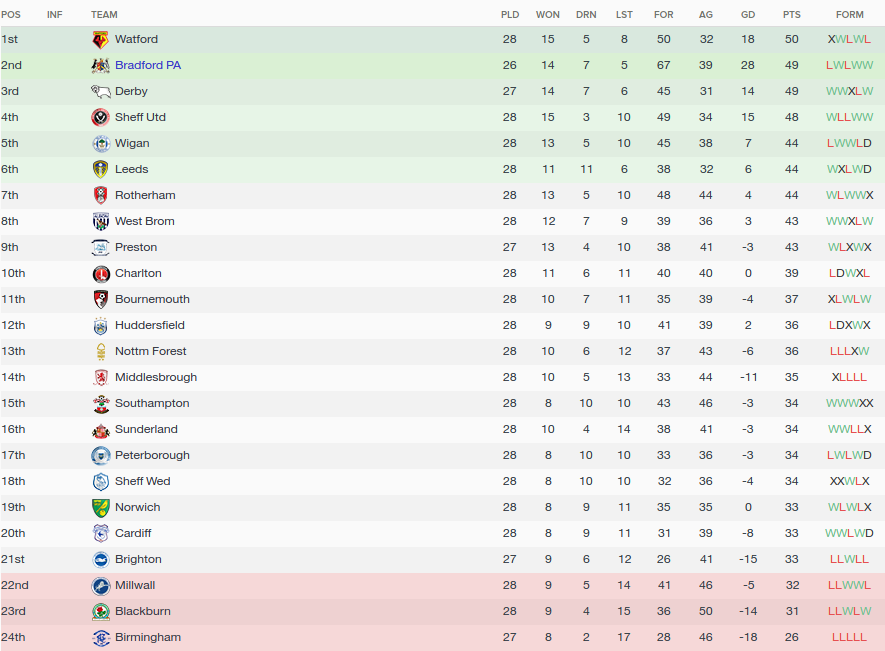 Heading into February, we are in an incredible position in the league with the potential to go top by a long way with our two games in hand on table toppers Watford. There are still Derby and Sheffield United who currently chase automatic promotion, but ultimately we are currently the favourites to take the top of the league with our games in hand and our current position just one point behind Watford in second place. 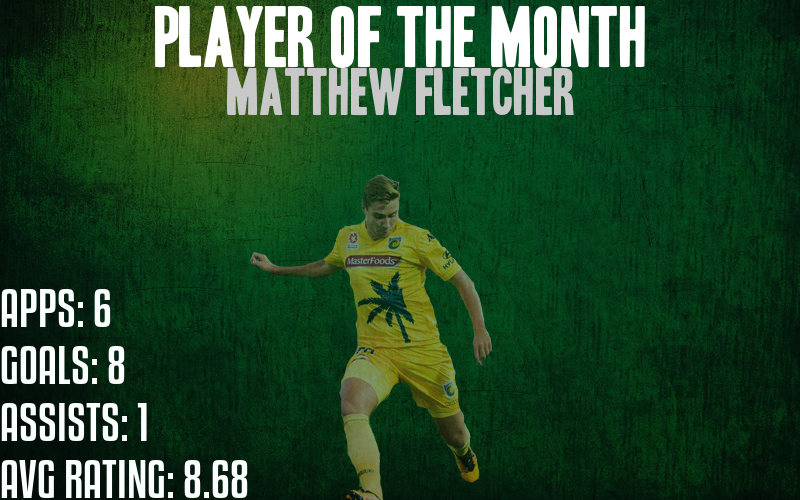 Another outstanding month for the Australian striker who bagged eight goals in total in January and has been able to settle down with a new strike partner in the form of Carabina and has helped the Brazilian to score two goals this month as well. But Fletcher takes the headlines this month up-front and altogether with some typically brilliant performances.

mgriffin2012
6 years
Another brilliant month mate, youre looking so good for promotion its almost unbelievable!
Login to Quote

Deleted
6 years
Briliant signings in Llorente and Carabina who will surely push u toward the prem. I have thoroughly enjoyed all 40 pages of your story and I can't wait to read moe. Keep up the good work with the story and push BPA toward the top of the table. Another solid month with January and make BPA the best team in the world!
Login to Quote

Jack
6 years
mgriffin2012: I know, I almost can't believe it myself! We just need to relax and not get complacent and we're there!

LiamDrury8: Cheers mate, I'm glad you've enjoyed the story so far and I hope I can deliver a final promotion to the Premier League for you! 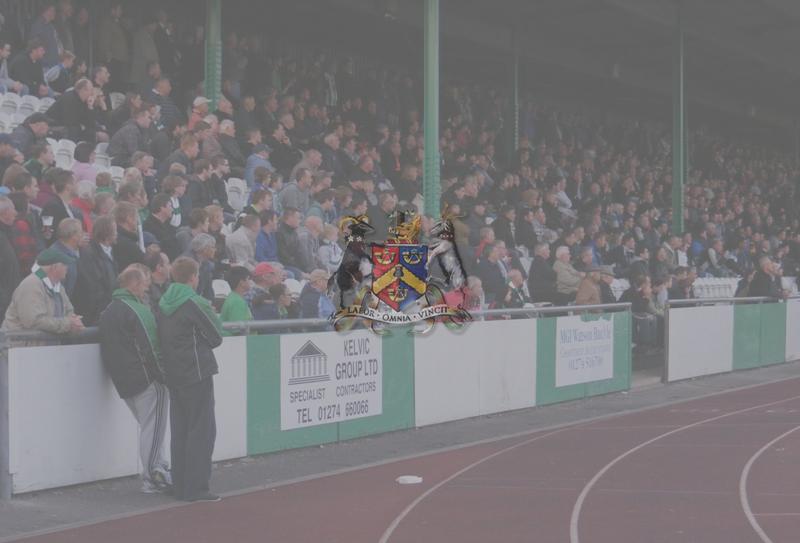 As the construction cranes leave the site of Bradford Park Avenue's Horsfall Stadium, the club are all set to welcome the fans back against Cardiff City on Sunday.

Plans of a 1,875 seat expansion at Horsfall Stadium began in December 2018 and has only just been completed today, with Chairman John Dean unveiling the new expansion to locals today.

This puts an end to the strain of postponed home games that caused Bradford Park Avenue lots of embarrassment during their time which they played their home games at The Shay.

But this can't be the end of the expansions for Bradford Park Avenue because if they do get promoted this season, which looks increasingly likely as the wins keep coming in for Bradford PA, then the Premier League requires a minimum seating capacity of 12,500 as well as undersoil heating.

This could mean that Bradford PA may have to relocate to a new stadium, an idea referred to before the Chabukiani era even started. John Dean proposed the idea of a 20,000-seater multipurpose stadium that Bradford Park Avenue could use way back in 2011 when the club were rotting away in the Evo-Stik Northern Premier League.

But the idea of a relocation could be a reality for some fans, with the dream of a Premier League side in Bradford becoming increasingly true for some.

But for now, fans at Horsfall Stadium could potentially be celebrating a promotion at their home stadium rather than at FC Halifax's Shay.
Login to Quote

BeanyUnited
6 years
Amazing progress mate will be interesting to see if you do need to relocate or not! All in all an amazing month bar the first fixture

mgriffin2012
6 years
Hopefully you dont have to relocate mate if its going to play a part in your finances! You're going to need a lot of money to compete in the PL and a new stadium might cost a lot!
Login to Quote

ScottT
6 years
Maybe it would be best to try and build a new stadium as soon as you get promoted, upgrade the seating again in the mean time. Relocation would be horrible!
Login to Quote

Jack
6 years
BeanyUnited: In the end it will all come down to the board, but even with this expansion that we've just had we are completely packing out the ground. I think a new stadium would be a lot more economical in the long term but who knows? Thanks man

mgriffin2012: I suppose that if we did take out a loan and paid it back in installments it wouldn't affect our finances so much on a month-to-month basis in the Premier League if we do get there!

ScottT: I can certainly see where you're coming from but getting it all done and dusted ASAP will make us better in the long term financially. A seating expansion is costing us like £1.5m a pop, whereas a new stadium e.g. 15,000 would cost us about £15m but with the potential to be expanded to say 30,000! I agree relocation would be bad as Horsfall Stadium is practically in the DNA of the club but it may be needed!

Atoobie: It's certainly more comfortable back on our own patch! Now onto the league title!