Well, like many managers, Menchinov has been heavily influenced by the legend that is T-Pul, as he prefers to be known 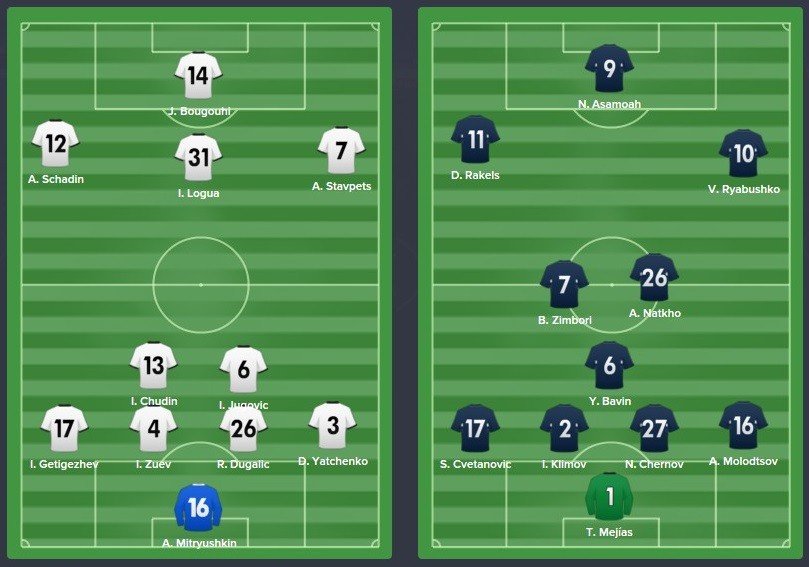 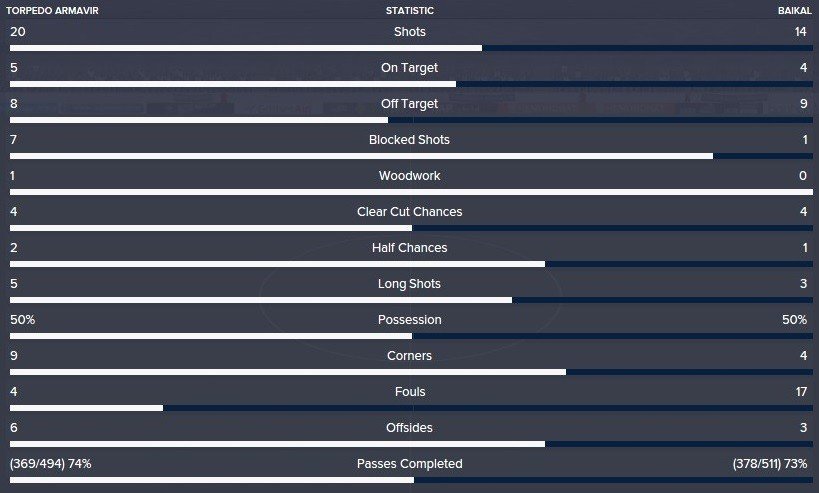 We went into this match knowing a draw would be enough to see us through but never the less, pushed forward straight from the kick-off, looking to extend our lead.

After failing to convert from a series of promising positions early, Torpedo grew into the game & managed to assert their own spell of dominance & on 15 minutes took the lead from the spot, courtesy of a foul on Artem Schadin.

Things then went from bad to worse as Nathaniel Asamoah picked up a head injury & Torpedo continually threatened to unlock our defence from a string of set pieces. Further insult was added to injury on 26 minutes as Deniss Rakels missed a golden opportunity to tie things up from point blank range before having his follow up effort cleared of the line by the Torpedo defence. It didn't feel like our day.

On half an hour though, Rakels made up for his earlier wastefulness getting on the end of a Molodtsov cross to draw us level in the match & put us back in the drivers seat of the tie.

As half time approached, Rakels spurned yet another golden opportunity to kill off the Torpedo resistance, again managing to pick out the keeper when the back of the net would have been easier to find.

At the half I reminded the guys to stay focused & urged them to push on in search of the killer blow.

The second half proved to be far less exciting as both sides struggled with nerves 7 the game became an arm wrestle with neither side able to rest control.

As we entered the final 10 minutes, Torpedo's desperation become apparent as they threw man forward in the knowledge that a single goal could be enough to see them through.

With 3 minutes to go I decided it was time to park the bus. Tighten up & waste some time, 5 we've 3 minutes to safety lads!

The instructions had barely left my mouth & it happened. Alexandr Stavpets was put one on one with Tomas Mejias. Seemingly in slow motion, the 28 year old smashed his shot straight at the keeper but somehow the ball found its way past the Spaniard & into the back of the net, 2 minutes left, 2-1 on the day. Torpedo were going up on the away goal rule!

With time running out we flooded forward in search of a miracle but when Rakels fired over, time was up. 3 minutes from safety, we'd somehow conspired to get ourselves relegated, a heart breaking result all things considered. 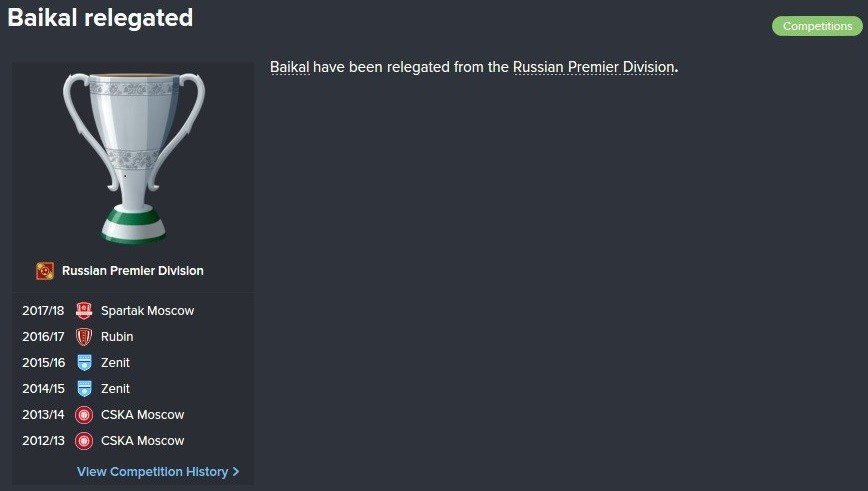 Griffo
4 years
Heartbreaking... I hope you are able to keep your job man and I am really looking forward to watching you battle your way back!
1
Login to Quote

mgriffin2012
4 years
Ahhhh man that's devastating! However you deserve to keep your job and earn a place back in the top flight!
1
Login to Quote

ninjaskill
4 years
Nooooooo. That would have been a long flight back, or drive for the fans.

Wonder what is next for Menchinov
1
Login to Quote

C.J.Lippo
4 years
All - Cheers guys. Was definitely devastating considering we'd done the hard work to pull ourselves out of the auto drop places but that's the lottery of a playoff. Only need to be a little off your game & that's what happens. 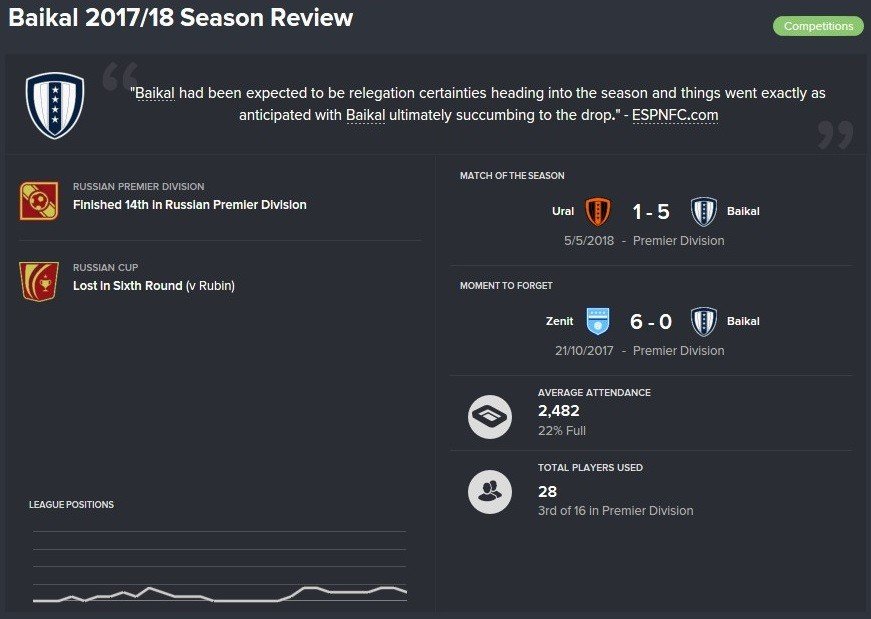 So, we were expected to go down & that's exactly what happened. We didn't go without a fight however & that at least takes a bit of sting out of the situation.

The board were also keen to keep me on &, after a couple of days of quiet reflection, I decided now may not be the best time to depart. I mean, how many teams are going to be interested in hiring a manager with only 3 years experience & a relegation to their name? 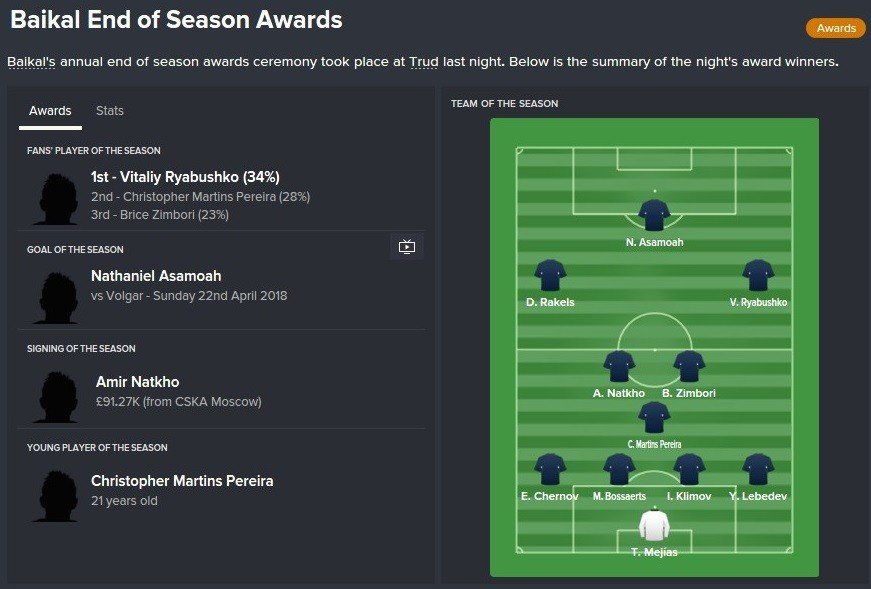 Despite being largely disappointing, Mathias Bossaerts is inducted into our overall best 11 along with Asamoah, Rakels, Martins Pereira & Chernov. 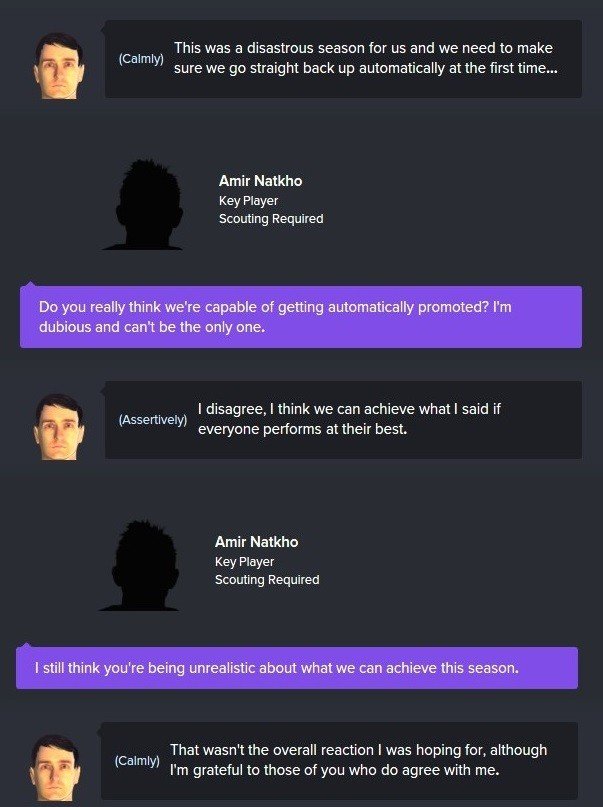 As I said before, I'd resigned myself to staying with Baikal in an attempt to help them bounce back to the Premier Division. This meeting changed all that.

Their lack of belief was disheartening. Did I really want to spend a year convincing them they were good enough? That they were unlucky. That they could do it. Short answer, no. If they didn't believe in themselves, I would be fighting a lost cause. 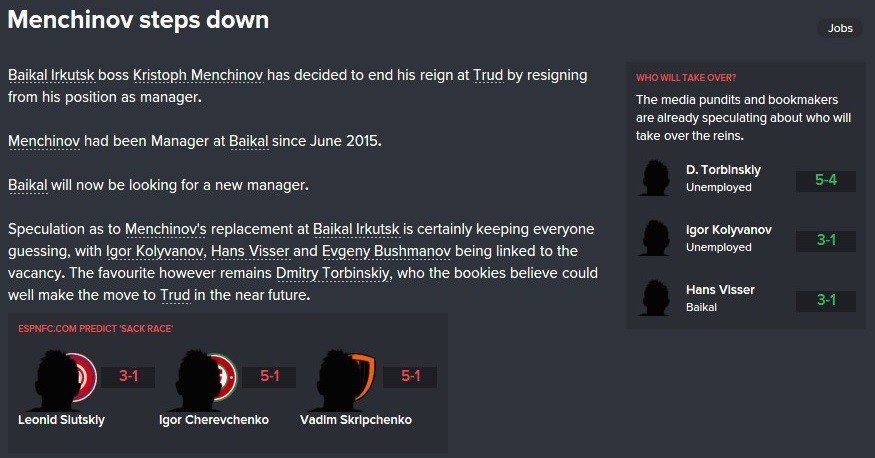 So it was with a heavy heart that I decided it was time for a new challenge. What that would be, I didn't know, but the time felt right for a change.


My new found unemployment meant that once again, it was time to deal with that blood sucking parasite, Viktor Lovinskey.

Besides the odd courtesy call, I’d heard very little from Viktor over the past 3 years. No doubt he was content to sit back & collect his share of my hard earned, but now it was time to put him to work.

Firstly, I informed him that I would be taking a holiday. Somewhere sunny.

I was hardly on the big bucks at Baikal but with my accommodation paid for & my only expenses of note being the take away I ate most nights while studying video’s, I had managed to save a little bit of coin, the advantages of being in a relatively remote location & having no partner or family to whittle away the money on nick-knacks & toys & such.

Secondly, I informed him that I would only be considering positions in top flight European competitions, no lower league crap. At least not until I get desperate.

“You know, Kristoph. Those jobs aren’t easy to come by” Viktor started “It would help if you got your face out there a little. There’s a football show here in St Petersburg that would love to get you in to discuss your time at Baikal.”

“Does it pay?” I countered.

“Fuck it then” I interrupted.

“Kristoph, you have to get over this fear of the media. It’s a big part of the job now days, have you ever actually given an interview? Outside of your compulsory pre & post match commitments I mean?”

“No.” I answered shortly, resisting the urge to hang up.

“Then before you go away get your arse over here & do the interview, it’ll make my job much easier & I guarantee it’ll improve your prospects.”

“Fine” I surrendered “I’ll do the stupid interview! Why the fuck I’d want to make your job any easier though is beyond me. I would have thought cashing a cheque you didn’t earn every month would be easy enough, but, I suppose, you’re not that bright are you?” I asked, only half jokingly.

“I may not be that bright but I know if you don’t get paid, neither do I, so it’s in both our interests that you do this interview, right?”

mgriffin2012
4 years
Shame that you decided to leave but understandable mate, hopefully your wait to take over somewhere new isn't too long!
Login to Quote

Reporter;Hello & welcome to Match TV, you free to air home of Russian football. Today in the studio we are joined by former Baikal Irkutsk manager, Kristoph Menchinov, thanks for joining us Kristoph.

Menchinov;It’s a pleasure to be here.

Now, lets get straight down to business, you recently resigned from Baikal following their relegation from the Premier Division, how do you feel about that decision now?

A little sad, If I’m honest. Baikal were good enough to give me my start in management &, in the 3 years I spent there, I developed a genuine affection for the club & its supporters, so it was definitely a tough decision to make.

You mentioned the supporters there, you seemed to have a great relationship with the fans, is there anything you’d like to say to them now?

Just to thank them for their support, they really were great through the good times & the bad, I really can’t thank them enough & wish them all the best for a swift return to the Premier Division.

Speaking of Baikal’s future, the club recently announced your assistant, Hans Visser, as your replacement, do you think he is the right man to lead the club forward?

Definitely. Hans has a keen footballing brain, he’s been at the club for a couple of years now, he knows the players, he knows the staff. I think it’s a good call.

Ok, that’s enough about Baikal. What about you, what does the future hold for Kristoph Menchinov?

Sunshine, at least for the foreseeable future. Not that I didn’t enjoy my time in Irkutsk, but I’m looking a little pale, it might be time to work on my tan.

So, there’s no offer’s on the table at the moment? You can’t give our viewers a scoop?

No, nothing to report as yet. As I’ve said I just want to take a break, hopefully just a short one, & see what’s on offer after that.

Well, there you have it. Former Baikal Irkutsk manager, Kristoph Menchinov, I’m sure there are a lot of clubs out there who will be interested in securing his services. Thanks for your time Kristoph.

We’ll be right back after this short break.
Login to Quote 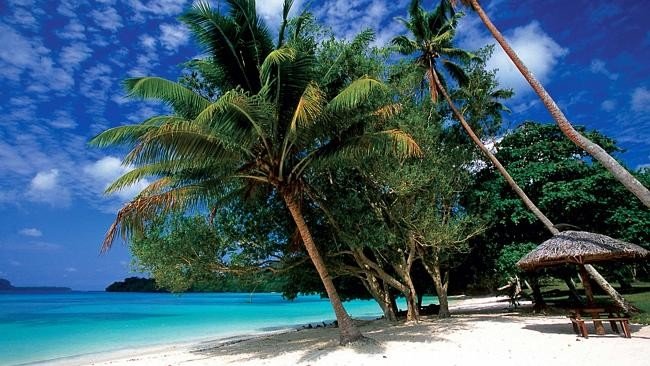 After days of sifting through a seemingly endless array of brochures & Pamphlets, I finally decided that Vanuatu would be the perfect place to unwind & work on my tan.

The place was beautiful, truly inspiring. Mile upon mile of unspoilt beaches, some of the clearest water I’d ever seen, Rainforests, volcano’s, the place had it all & I endeavoured to see as much of it as possible, attempting to forget the footballing world in doing so.

Inevitably though, I found myself stalking the Parks of Port Vila just to look at what the locals had to offer.

From what I could gather, a side named Amicale F.C. were the team to beat & I managed to catch a couple of their games. The level was not much more then park football, although the locals were quick to inform me that their sides often did quite well in the Oceanic Champions League. Go figure.

Of course, I also kept track of the comings & goings in my homeland, much as I tried not to.

It was disheartening to learn that jobs at Rubin, CSKA & Zenit had all come & gone without so much as a glance in my direction. I knew I wouldn’t be the favourite to land such jobs but I thought I might at least get an interview or two. Apparently not.

Maybe it’s time to revisit the first division? I’d no sooner finished the thought & my phone rang. It was Viktor. Don’t let him know you’re getting desperate!

“There is no mistake Kristoph, I know who I’m calling.”

“Then you have me work?”

“I have you an interview at the moment, only you can turn it into work.”

“Haha, you’re a funny man Kristoph. You know that? You won’t be laughing when you find out what I have lined up for you!”

“Well Viktor, don’t keep me in suspense, what is it?”

“What is it!? It’s a chance of continental football, a potential 7 figure transfer budget & a wage that isn’t chicken feed, that’s what it is my friend.”

“Sounds great, too good to be true in fact!”

"Well it is true, so pack your bags & head to the airport. I'll have a ticket waiting for you & send you the rest of the details in the meantime."

Jack
4 years
ARGH WHAT IS HAPPENING?! This better be good