The firs season under Finnish manager Teemu Nieminen is finally over. The month of May was a very interesting month as the Red Devils would get a win, draw and loss in the final three matches. It did not matter as in the previous month they had locked up the third spot giving them a shot at Europe for the next season. Right after the match against Glacis Utd. Teemu signed a one year extension.

The month began with a tough loss to Lions. In this match Neiminen was looking to bring in some of reserves and youth to give them a chance and to see how they could do next season. John-Paul Duarte would be our only goal scorer in this 3-1 loss. The next match came in the form of a draw against St. Joe's where Brian Perez scored a late goal to give us a point. Finally Manchester 2 capped off the season with a big 2-1 victory over Glacis United. Player of the Year:

John-Paul Duarte was a class above the rest this season. Without his hard work Manchester 62 wouldn't be in the spot they are now. Leading the club with 10 league goals he also collected another one in the Rock Cup. This season he had an average of a 7.15 rating. Even though players such as Jeremy Lopez had such stellar seasons as well, it was John-Paul whos play helped this club turn the season around.

Other Awards:
With the 2015/16 season over we present to you the end of season rewards. Voted by you the fans and the media each player deserves the award(s). Congratulations everyone!!! Managers Thoughts:
Wow this is crazy how good we turned this season around. It took a little longer than it really should have but we did it and are now off to Europe. This was a pretty mixed month and it does not bother me as this club already locked up third. I am glad that the final match of the season was a victory over a rival.

What to look forward to in 2016/17:
The Red Devils will now be participating in the Europa League for the first time in club history. This is going to be huge for the club as they enter the first round of the competition and are looking to have a good run in it. Now it is highly likely they will go far but this team is ready. Other than that the club will have the league and the two cups to look forward to.

Thanks for a great season and Glory Glory Man 62!!
Login to Quote

Griffo
4 years
Going to be a tough task to catch the top two sides next season but I have faith!
Login to Quote

mgriffin2012
4 years
Mixed results to end the season with, but you'll come back stronger next year!
Login to Quote

ninjaskill
4 years
Good first season but, quite the gap to catch up with the top two for the future.

And good luck in Europe
Login to Quote

Justice
4 years
Congratulations on European qualification, it is a big step forward for the club!
Login to Quote

MJK46
4 years
Everyone Thanks and I hope next season and Europe will be amazing. I am not sure if I can win the league as Europa and Lincoln are just too good but at least I can shoot for Europe make money and improve the squad that way.
Login to Quote

It has been a few weeks since my first season has ended and this offseason is finishing up way too fast in my opinion. It feels like yesterday we just finished up and that soon the guys will have to report back due to Europa League.

I am back in Finland for a bit just relaxing but I need to return back to Gibraltar as the Europa League draw is in a few days and the club is going to be back a little earlier than expected. I hope we get a decent shot at advancing and that we can make some good money. To be honest I think this squad is going to make some noise in the first two rounds.

Anyways I want to recap my first year in management. Overall I feel that I did well for my first time and that I grew up a lot. In the 2015 portion I was so close to getting fired I was lucky that we turned it around when we did. The board seemed really pleased at how I just made this club better in 2016. The only thing that really upset me was it took them to the last month to give me an extension. I know they were still skeptical but at that point I deserved one.

One thing I am worried about is that a whole bunch of the players are going to be gone once their contracts end at the end of the month. I have tried and tried to renegotiate with a few really good players but they keep saying they are too big. Well yes they are but now that we are in Europe they should just sign on and help us out. Ugh being a manager sucks at times.

Finally I am looking forward to the 2016/17 season. If we can get a good draw in the first qualifying round I think we have a chance at attracting better talent. This will be a very big year and I just have this odd feeling that Lincoln will finally lose the league. We just need to keep up the momentum that 2016 gave us and go from there.
Login to Quote We now begin the road to Stockholm here in the 2016/17 UEFA Europa League First and Second Qualifying Rounds. 108 clubs from all over Europe have been put into fourteen groups that are divided up by seeded and unseeded clubs. Here are where each team is at the moment. The matches are set for 30 June and 7 July and 14 and 21 July for the second qualifying round..We will begin the draw in a few minutes.

Now here is the draw, good luck to all clubs and their supporters let this be one of the best competitions yet:

My thoughts:
So we are drawn Hrvatski Kup winners HNK Sibenik of Croatia. I really don't know what to think about this other than this is going to be one hard test. From what I know Croatian clubs are really really good and this is going to be a test. We will need a miracle if we want to move on to the next round. If we do move on we might have to face the mighty Partizan and that is one match I am not looking forward to
Login to Quote

Justice
4 years
Certainly a tough draw, but the money earned from ticket sales & merchandise sales from the European ties will certainly give the club a huge boost!
Login to Quote 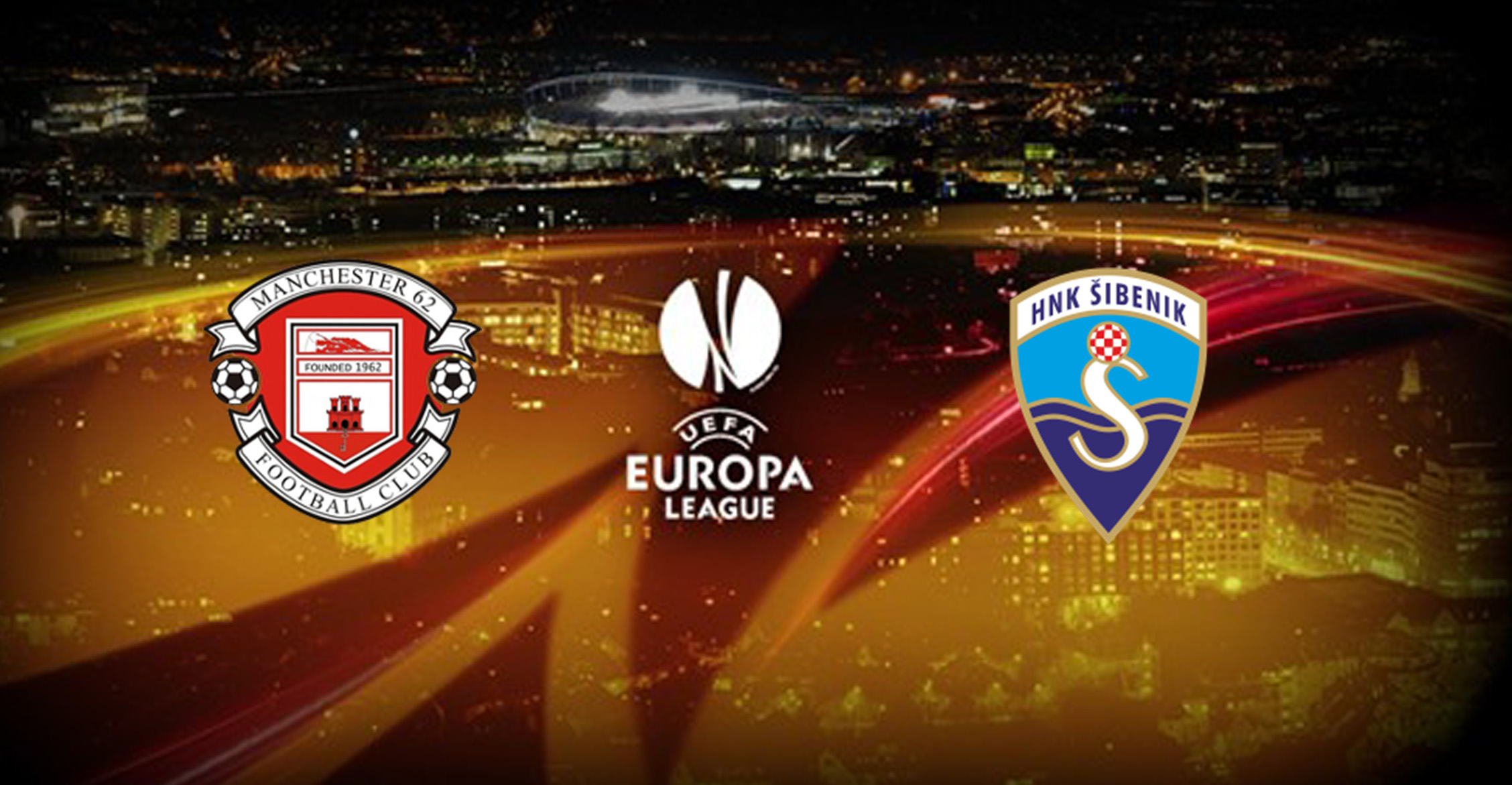 For what was a really trough draw for the Red Devils against Croatian side HNK Sibenik the boys handled the pressure really well. For it was the clubs first match in Europa League the draw did not play nice as Sibenik is a quality squad.

Despite losing by a score of 4-1 Teemu Nieminen's crew played with their hearts and worked hard all 90 minutes of the match. Sadly nobody from our side scored and that is ok as the final score could have been worse. Our only goal came from an own goal. The biggest surprise to the match was the pressure the Red Devil's defense had on the Croatian Cup winners. Thanks to that the score was much closer than anticipated.

"To be honest I could not ask for a better game than what we played, going into this match I knew there was no chance in hell that we would win, but only allowing four goals is really impressive for such a mismatch. I hope we can keep this momentum up when we return home for the next leg," said Teemu Nieminen after the match on the plane ride home.

With the first leg over Manchester 62 gets a chance to rest a few days before the return leg. The second leg is set for a 7:45PM kickoff at the Victoria Stadium on 7 July. Tickets start at €5 and can be purchased at the box office anytime before Wednesday 6 July. 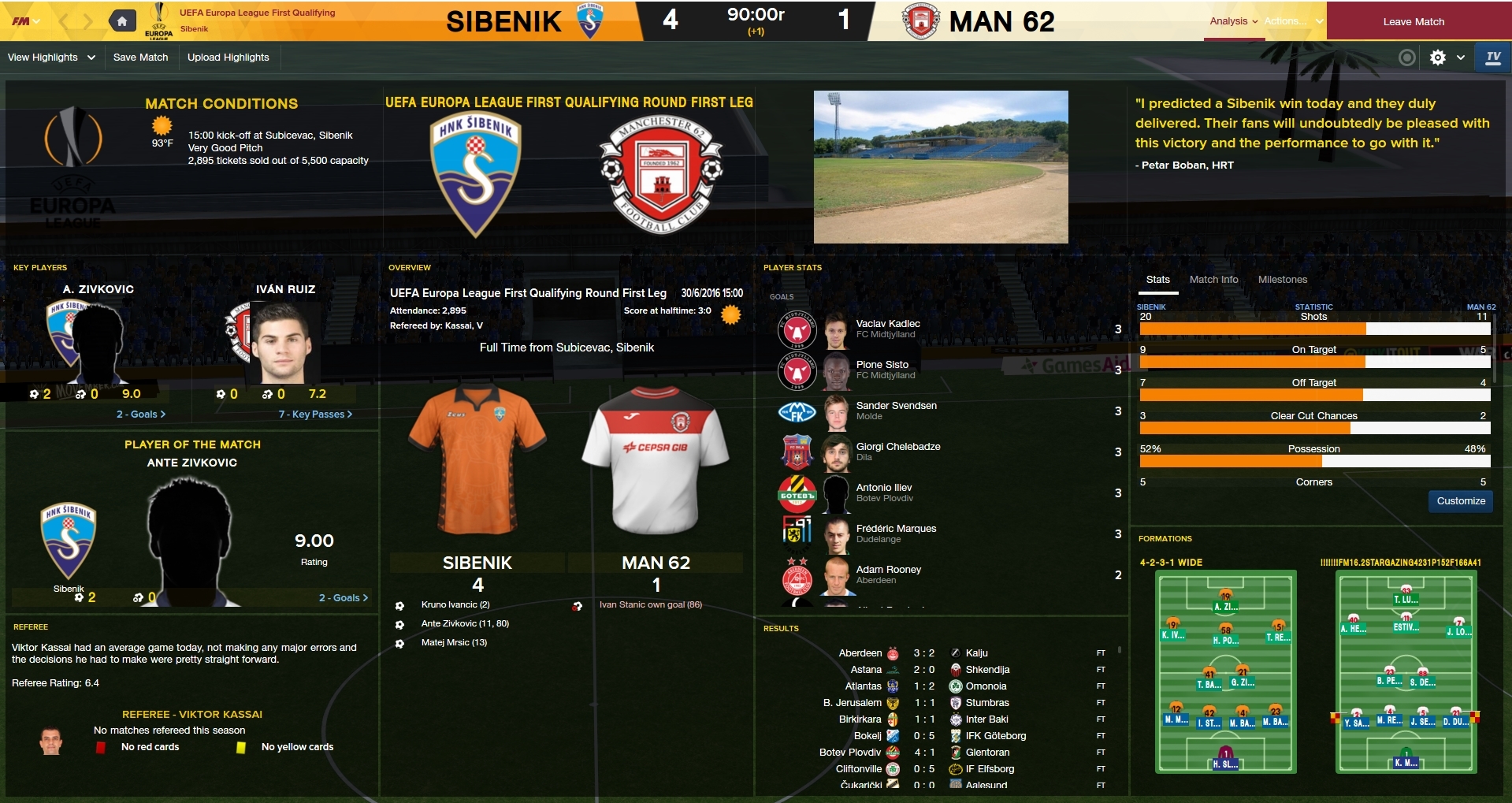 ScottT
4 years
An unlucky result, but a goal is a great feat for you lot I suppose.
Login to Quote

Justice
4 years
Win 3-0 at home and you're through