ninjaskill
6 years
mgriffin2012 Yeah all the teams still in look better than us but, wouldn't complain if we pulled off another upset
Login to Quote

ninjaskill
6 years
After training on Friday the team all went into the small canteen with a big TV to watch the draw for the Europa League quarter final. It didn’t matter who they drew Alex’s side would be underdogs for the tie. 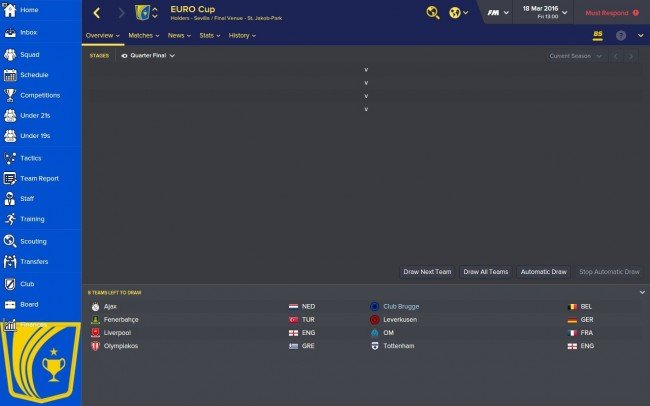 Ajax or Olympiakos would be Alex’s preference. He would take OM or Fenerbahce while Liverpool, Tottenham or Leverkusen would leave them needing a miracle.

Fenerbahce was the next team read out. Of the three left they were the ones Alex would least want. “Club Brugge”. The team cheered as they were drawn out and Alex couldn’t complain Fener were a good team but, they were nowhere near Leverkusen, Tottenham and maybe Liverpool. 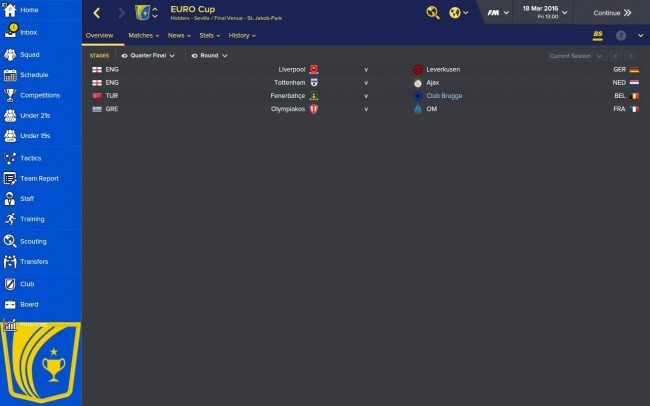 Being drawn second they would have to travel to what Alex guessed would be a hostile atmosphere in Istanbul for the first leg before giving Fener a warm welcome to Bruges.

“Stan, get as much as you can on Fener for us we are going to have to know them well to get past them.” Alex ordered

“On it boss man” Was his response with a mock salute. 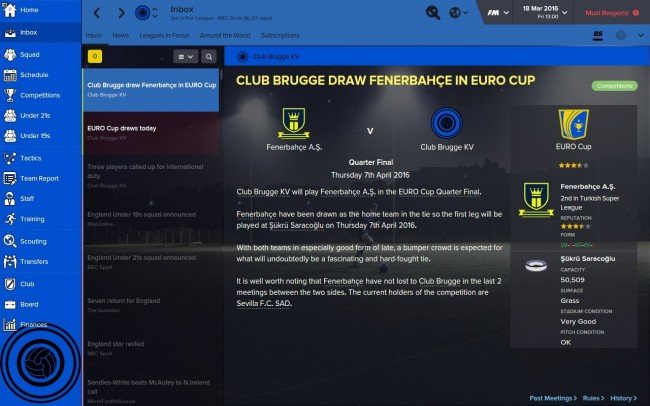 The next day Alex was glad to be out of the rain with training and back in his warm dry office. Felipe Gedoz had yet again impressed him and he had no idea why he wasn't used by the last manager he played incredibly and trained really well on top of that. 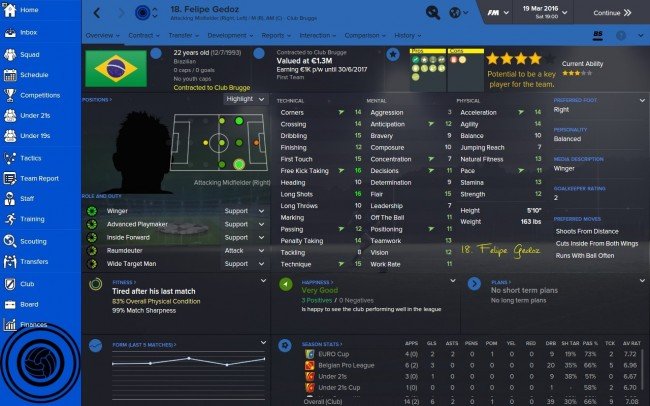 He heard a knock “The photographers are ready.” His assistant told him.

Alex rose and headed over to a small room where all deals were signed and was greeted by the club photographer. “Alright?”

“Yeah, ready and waiting. Oh and here’s a pen.” Alex had forgotten to bring a pen to one contract signing so was now given one everytime by Alvaro the club photographer.

“Sign there and initial there” Were the blunt instructions from the Club lawyer. Alex signed and initialled before sliding the document over to the player who did the same.

“Here for another year then Timmy.”

“Yep” Timmy Simons responded “Going to have to throw me out of here to get me to leave.” 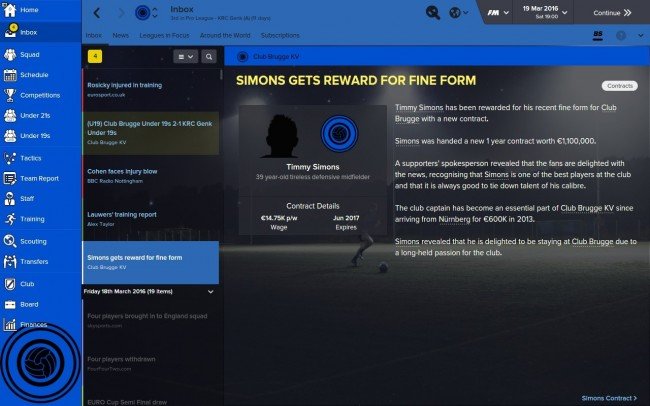 Despite turning 40 next year Simons had asked for and got a new deal, that even contained a clause to make it a two-year deal. He was also taking over €10,000 a week less than his old deal home per week.
Login to Quote

Soze
6 years
Bloody 40! Hope he can still do it for you
Login to Quote

mgriffin2012
6 years
That is insane! 40 years old!! Good luck against Fenerbahce too, think you can pull off another victory, i really do!
Login to Quote

Justice
6 years
Fener will be tough opposition but hopefully you can rally the team to knock them out!
Login to Quote

BeanyUnited
6 years
40 years old?? What a hero he is hahah! Best of luck in what will be a tough up coming fixture
Login to Quote

Jack
6 years
You're more than capable of continuing your run in Europe, and a 40 year old?! That's crazy! Get him out to the MLS

ninjaskill
6 years
Soze After he gets going with his Zimmer you can't stop him.

Griffin Yeah not looking forward to retired life I guess. We will have to play well over the two legs to get past them they have some quality we can't match in RVP and Nani.

Justice Yeah we will have to be at our best to get past them that is for sure.

BeanyUnited Yeah still one of my best players as well. Thanks have to play very well

Jack Will be tough but we can do it. He is quality still more than capable to play for us
Login to Quote

After the longest drive Alex had endured in Belgian football got them to Genk to face with a place in the top six possibly being at stake for Brugge. The team got through it by watching OHL to top AA Gent to the Belgian Cup. Alex had gone for a near full strength line up except a couple of changes in defence. 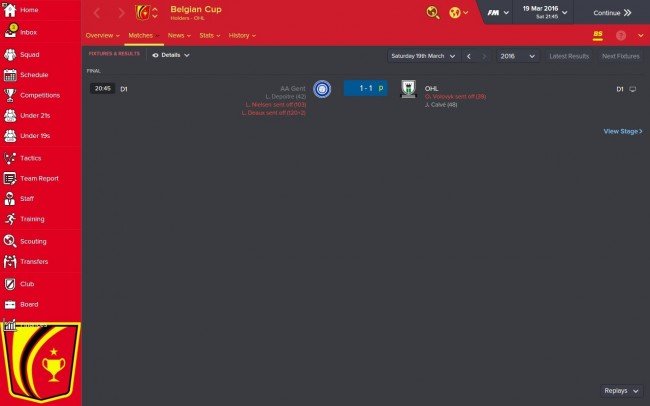 Meunier had been injured in the buildup to the game and Dion Cools had been pushed into the starting eleven at late notice and Alex hoped it wouldn’t effect his performance. 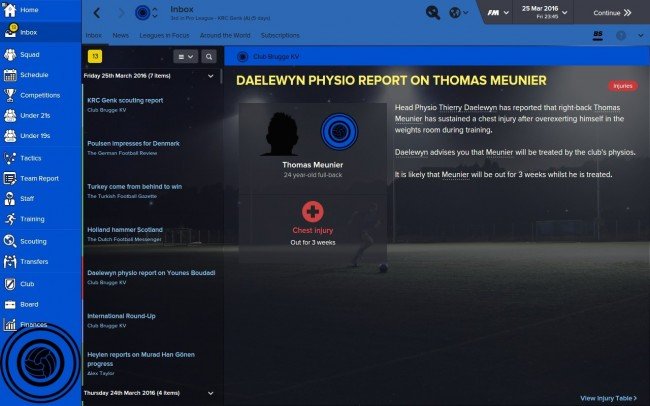 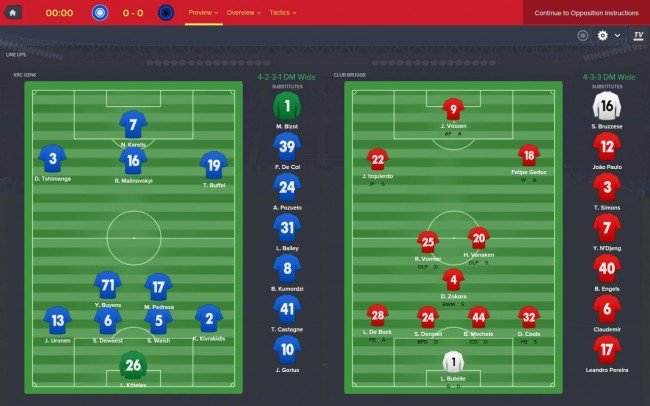 After 15 minutes a Genk shot from range was miles wide and gave Brugge a goal kick. It was hit long and Genk regained possession in midfield to Alex’s annoyance. Buffel got the ball wide to Tshimanga he tried to whip in a cross but, was blocked by Cools. They kept the ball and tried to push the ball through the middle. Malinovskyi turned and was able to slip in Tshimanga he took a touch and then squared the ball to Karelis. He shot first time, Butelle was somehow able to dive across goal and tip the ball out of play.

After 30 minutes another long shot went miles wide of goal to give the ball to Brugge. After a couple of headers Genk got the ball down and pressed forward. The ball was worked centrally then out wide to Kivrakidis. The ball ran through the box until it got to Tshimanga. He took a touch and turned Zokora who crudely brought him down. The referee instantly pointed to the spot and Alex could have no complaints. Not to say he didn’t voice any to the fourth official.

Buyens set the ball down on the spot and waited as Butelle did all he could to delay the kick. Buyens ran forward and shot low to the left. Butelle dived down low the same way and pushed the penalty away. Tshimanga won the race to the rebound and fired low into the far post leaving Butelle no chance. Alexs joy at the save disappeared instantly as he watched Genk celebrate.

“Close him down” Alex yelled as Buyens was able to coast deep into the Brugge half. He played the ball up to Karelia as Zokora tried to close him down. Karelis turned and slipped in Tshimanga. He took a touch and then tried to steer the ball into the bottom corner. Butelle dived low and got a hand to the ball but, it slipped under and into the back of the net. Two goals down after 40 minutes and Alex had seen nothing to give him hope.

Alex’s side got in two goals down. “Come on! You have to create something. Nothing upfront. Nothing! We have to improve or we will lose by a hell of a lot more than two goals.” Alex felt the game was over but, looking at the other results they seemed fine for the top six.

Alex watched and made a couple of changes but, nothing had been created as the clock went past the 80th minute. Genk were just passing the ball around the back until it was launched long and played in Bailey at a very tight angle. From the tight angle Bailey tried a shot across Butelle and it was palmed away for a corner kick.

Buffel and Pedraza exchanged passes thirty yards out until Bufeel got bored and ran forwards unopposed. He cracked off a shot that had Butelle totally beat but, cracked off the bar and out for a goal kick. 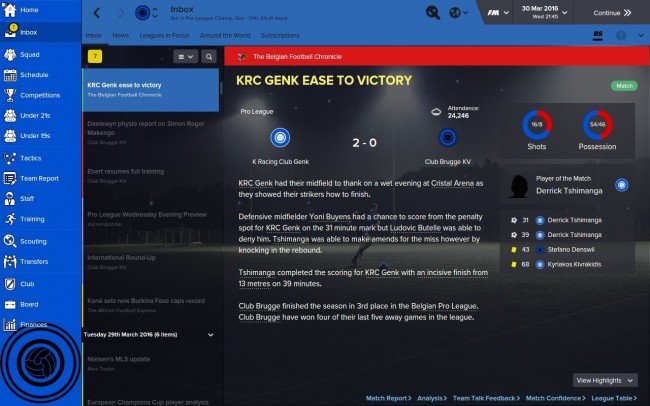 Alex ranted and raved at his squad for ten minutes after what was an awful performance where they had done nothing and deserved nothing from the game. 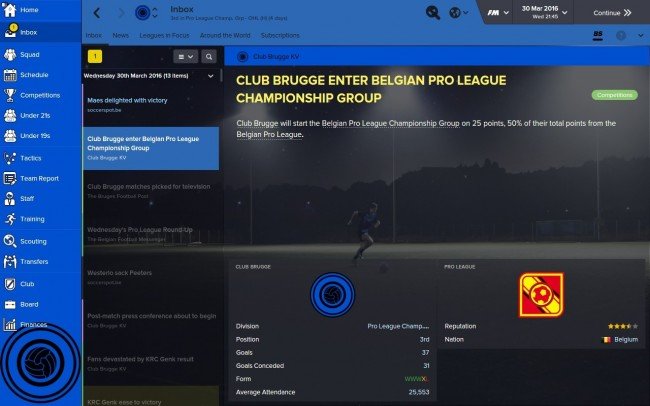 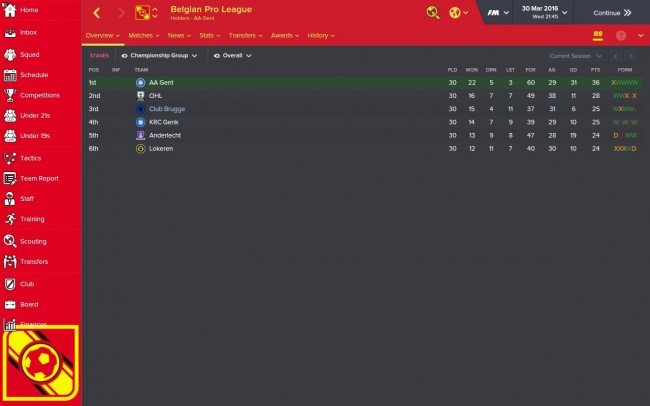 mgriffin2012
6 years
Not the best of results but Champions League football is very much within touching distance!
Login to Quote

ninjaskill
6 years
Griffin Yeah not a great result. The points being halved thing really helps us trying to get into the Champions League
Login to Quote 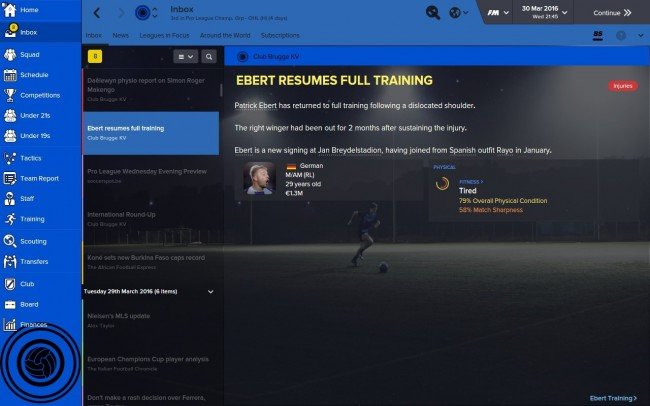 Alex was pleased to see his big signing Patrick Ebert back in training having recovered from his injury in his first game for the club. Training had been rather uneventful and Alex was in his office and hoping to get home early when he heard a knock on the door. 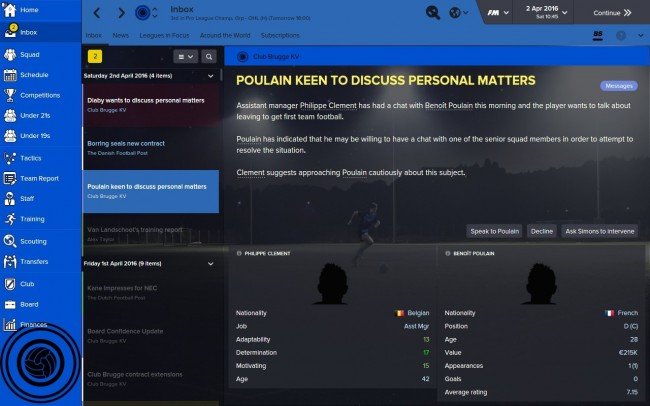 He sighed “Come in.” It was Benoit Poulain a French centre back who had played twice and had wanted to play more when Alex arrived but had been happy to wait and see if he would play more. Alex could guess where this conversation would go.

“I want to play more boss.” Benoit opened with.

“Hello to you to” Alex though before replying. “Engles and Denswil are first choice centre backs and Mechele is third choice so you won’t get a lot of game time here unfortunately – 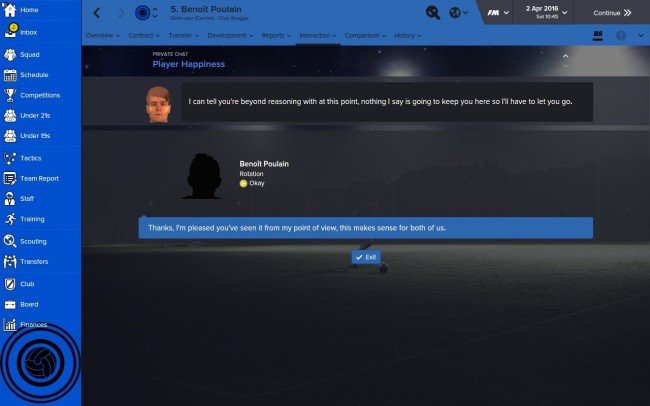 “Fine” Alex shot back “Consider your self on the transfer list as of now. I will get Roel to call around and see if we can get you out of here ASAP.”

“Good” Benoit said before turning and leaving the office. Awful manners Alex thought and he was more than happy to let him go as he was doing nothing to earn his wages and taking the spot of a young player in the rotation.

Benoit was hardly out of the office before Abdoulay Diaby came in and Alex guessed he was about to have a similar conversation. “Let me guess Abdoulay you want to play more.” 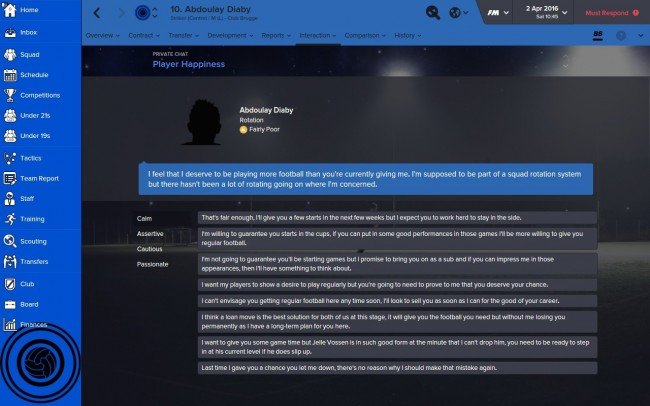 He seemed startled that Alex had started the conversation. “Well I have three to four strikers who are better than you and in better form than you so I won’t be playing you more I will look to move you on out of the club as soon as I can.”

“Umm…” He hesitated “well okay then thanks about that. Hopefully I can get a good move.”

Alex added another name to the post it note to call Roel with needing to be sold as soon as possible. 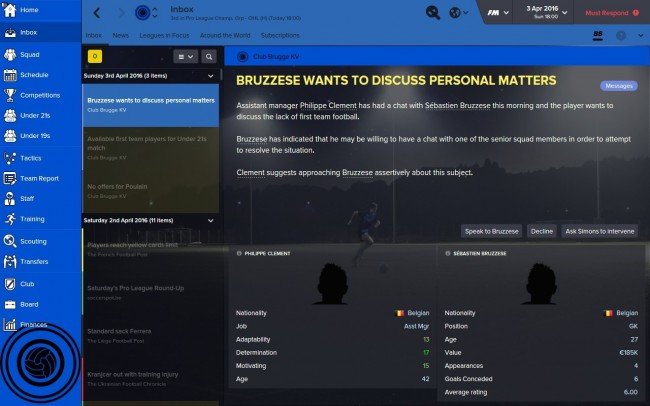 A small amount of work later and Alex heard yet another knock on his door. He groaned inwardly “Come in.” It was back up goalie Sebastien Bruzzese and Alex figured it was conversation number 3 of the day. Until he decided to change it. “If you are in here to ask about first team football you have two options. Either turn around and leave as you aren’t playing ahead of Butelle he has been incredible or sit down and we will discuss your plan to move to another club.” Bruzzese thought for a split second before saying okay turning on his heel and walking out of the door. 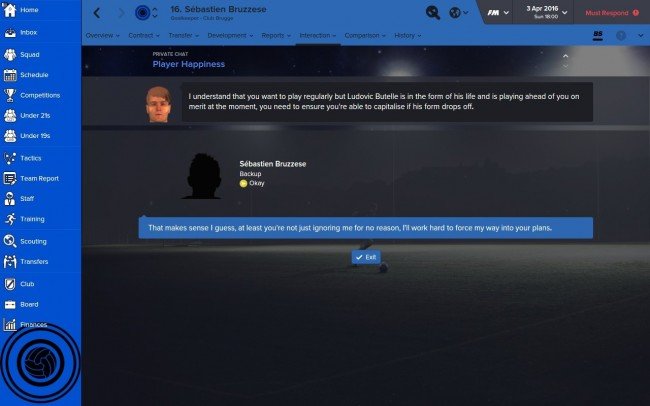 Alex followed him out as quickly as he could before another player came to him asking for first team football, he got into his car and headed for home not stopped by any of his players.
Login to Quote

AuthoR
6 years
Not great that people are chasing you up to get first team football, hopefully you can sort them out or get them out
Login to Quote

Griffo
6 years
Absolute pain isn't it, that is why I get my roles in the contracts absolutely spot on!
Login to Quote

ninjaskill
6 years
AuthoR No not thrilled by it, plan on dumping two and keeping the back up GK

Griffo Yeah, the annoying part of taking over halfway through the season
Login to Quote

You are reading "The retirement of Alex Taylor".