ScottT
6 years
Looking fantastic, Kaiserslautern are a club with a great history I'd say so hopefully you can restore it.
Login to Quote

ninjaskill
6 years
Nice job getting an early lead. Hopefully you can be in the Bundesliga next year
Login to Quote

Atoobie
6 years
Just caught up, lovely graphics, such a smooth look. All looking good so far
Login to Quote

tenthreeleader
6 years
Do love a good tale auf Deutsch. Good luck to Kaiserslautern, will look forward to seeing where you take this!
Login to Quote Kaiserslautern had their midfield to thank on a warm summer's afternoon at Stadion An der Alten Forsterei after they showed the teams strikers how to finish.

Daniel Halfar scored in the third minute from the penalty spot after a Dammfeld defender committed a two footed tackle in the box. Advanced playmaker Mateusz Klich doubled the sides lead in the 9th minute with a deftly executed finish from 18 yards.

Just after half time, Bobby Wood scored to bring Hammfeld into contention for a point or three, but Kaiserslautern held on to take all three points.

Kaiserslautern were significantly overpowered against Duisburg, who enjoyed a size advantage of 13lbs on average.

Ball winning midfielder James Holland gave Duisburg the lead in the 19th minute with a close range finish. False nine Jan-Lucas Dorow continued his fine form by securing a point with a simple tap in in the 56th minute.

Dussesdorf also had a huge size advantage over Kaiserslautern, weighing on average 1st and 3lbs more.

Joel Pohjanpalo scored from the spot after Klich brought him down inside the box. In form man Jan-Lucas Dorow capitalised on a mistake from Alexander Madlung to equalise from a close range.

Heidenheim hold one of the competition's worst defences, yet held for a battling display against Kaiserslautern. Jan-Lucas Dorow opened the scoring in the first 13 minutes with an incisive finish from 14 metres, before Bard Finne equalised after capitalising on a mistake in the Kaiserslautern defence.

Heidenheim took the lead just before half time, but Jan-Lucas Dorow scored once more in the 78th minute to keep 10 man Kaiserslautern from losing. 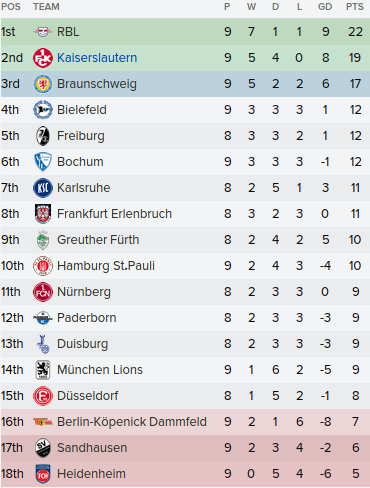 Kaiserslautern are unbeaten in nine and continue to look dead certs for promotion, however a poor run of three draws in a row has seen them drop to 2nd.

Justice
6 years
Cruising towards promotion.... Let's hope you can go the distance this season!
1
Login to Quote

Soze
6 years
@Griffin, @Justice Thanks guys, hopefully we do get promoted!
Login to Quote Karlsruhe managed to defeat Kaiserslautern on a wet evening at the Fritz-Walter-Stadion.

Attacking midfielder Horiki Yamada managed to give them the lead with an incisive finish from around 13 metres in the 29th minute. Kaiserslautern nearly equalised through a lapse in Karlsuhe's concentration but failed to make their chances pay.

A close-fought game ended in a one sided result for Kaiserslautern away from home.

Marcus Piossek scored the first goal in the 13th minute, his first for the club. Complete wing back André Fomitschow doubled the lead with a free-kick from the edge of the area 40 minutes into the game.

Jan-Lucas Dorow and Manfred Osei-Kwadwo teamed up to score the third and fourth goals in the 72nd and 74th minutes as Kaiserslautern dominated the score-sheet.

Defensive forward Veton Berisha gave Furth the lead with a close range finish which was timed impeccably in the thirty-fifth minute. False nine Maurice Deville was given his first chance to impress and did so with an accurate finish from inside the box, a goal on his debut.

Hertha were lucky to beat Kaiserslautern in a hard fought cup game.

Tireless midfielder Per Ciljan Skjelbred got Hertha off to a flyer by scoring an accurate finish from inside the box. Inside forrward Jon Daoi Bodvarsson equalised for Kaiserslautern in the 53rd minute with a great finish from close range.

Vedad Ibisevic scored in the 120th minute from the penalty spot after Kalou was bought down within the area.

Kaiserslautern suffered their first heavy defeat of the season just two days after their defeat to Hertha in the cup. The manager fielded a similar team due to injuries within the squad, which left a tired Kaiser squad that could not keep up. 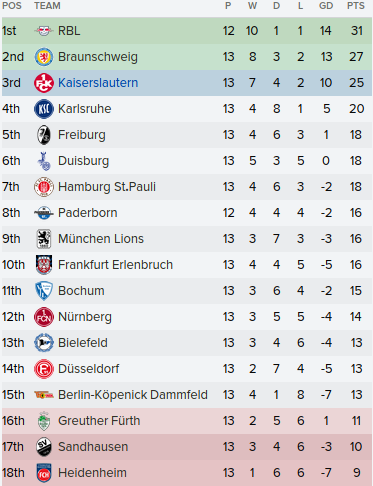 Kaiserslautern's unbeaten run was ended this month and a poorish run of form has left them sitting in third.

Jack
6 years
Not the greatest months by your standards, but some of those results should be the results that fire you up for future fixtures!
Login to Quote

Soze
6 years
Yeah I was shocked when I saw it

Atoobie
6 years
Good wins to be honest, lot less draw in October but more scored against you xD You'll get the balance soon
Login to Quote