Jack
6 years
I just looked up Hrgota in my save in 2020 and he looks amazing! Quality buy

BeanyUnited
6 years
Hrgota is unreal on FM16 in a few years time, you have yourself a title side in the waiting here mate. Exciting times

ScottT
6 years
Two great signings, looking forward to what they have to offer.
Login to Quote

Sassuolo's Italian defender Emanuele Terranova has joined Kaiserslautern on loan until the end of the season.

Terranova was reportedly unsettled at the Mapei Stadium, and there is speculation as to whether he will be returning to Italy next season.

The defender was signed as cover due to a high number of injuries within the Kaiserslautern squad and is expected to be used as a rotation option when those players return to full fitness.

Kaiserslautern supporter spokesperson revealed that fans are happy with the acquisition and wait to see whether the player can impress.
Login to Quote

Jack
6 years
Looks decent, hopefully he can help you a lot this season

mgriffin2012
6 years
Have played against him with Parma and he did pretty well so a good piece of business I think mate!
Login to Quote

Soze
6 years
Unfortunately my PC messed up a bit so planned updates are going to be smushed into one for this update, and then back to normal 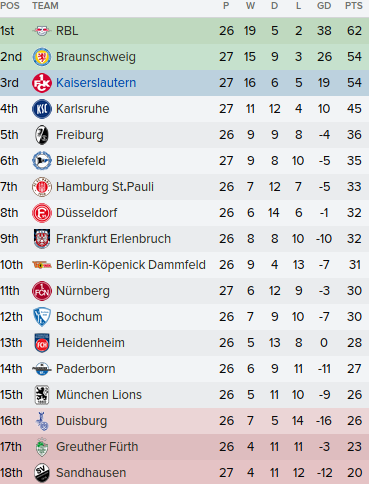 BeanyUnited
6 years
14 points out of 24 is not to be sniffed at pal, very solid stuff! Second place is more than do able this season, maybe even first with a good run of form!

Soze
6 years
I've still got to play both RBL and Braunschweig so it's all to play for!
Login to Quote

Kaiserslautern have announced their intake of young players for this season after the trialists won a hard-fought competition against the current u19 squad. Here are the players that stood out.

mgriffin2012
6 years
Still going really strong in the league mate, hopefully you can push for second now though!
Login to Quote