mgriffin2012
6 years
Not the best of months and you were unlucky to lose out to Hertha!
Login to Quote 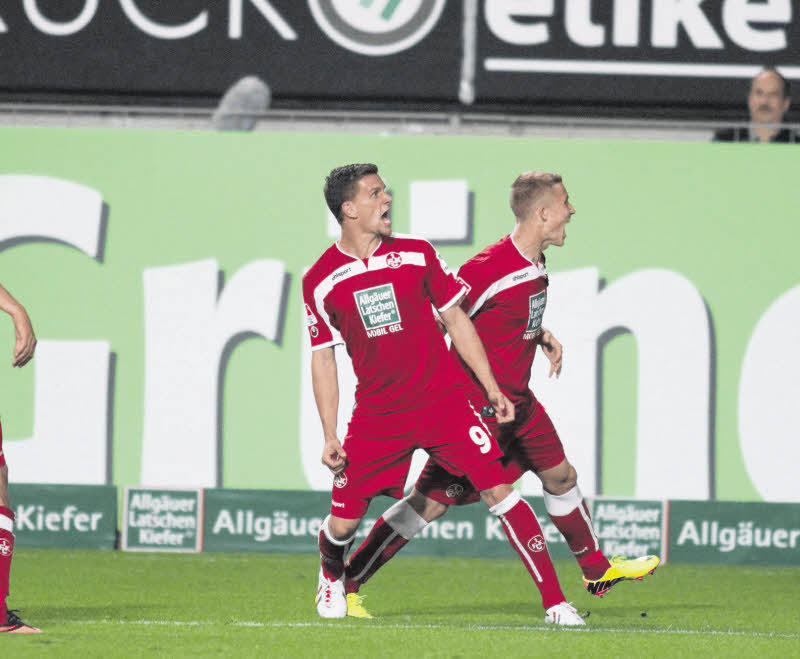 Bielefeld hold one of the worst defences in the league this season, and this trend continued as they struggled against a weakened Kaiserslautern side.

The game was fairly even until the 73rd minute when complete wing back Chris Lowe scored a close range finish.

Kaiserslautern's game against Red Bull Leipzig was one to forget for RBL fans.

Advanced playmaker Lukas Gortler made his first appearance after being moved from Kaiserslautern II due to injury issues within the squad. He got the team off to a flyer with a tidy finish from 16 metres after three minutes. RBL equalised as Youssef Poulsen made a blinding run straight from the kick-off, making the score 1-1 within four minutes.

Gortler scored his second of the game in the 42nd minute with a close range finish to give Kaiserslautern the win.

He scored a fine header from around the penalty spot in the 18th minute, and he scored a well timed finish in the 46th to give Kaiserslautern all three points. 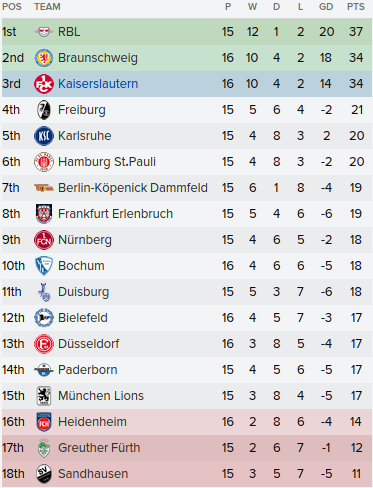 Kaiserslautern remain three points off the top, but RBL have a game in hand. However, the sides win against RBL keeps the sides title hopes alive.


Player of the Month: Lukas Gortler 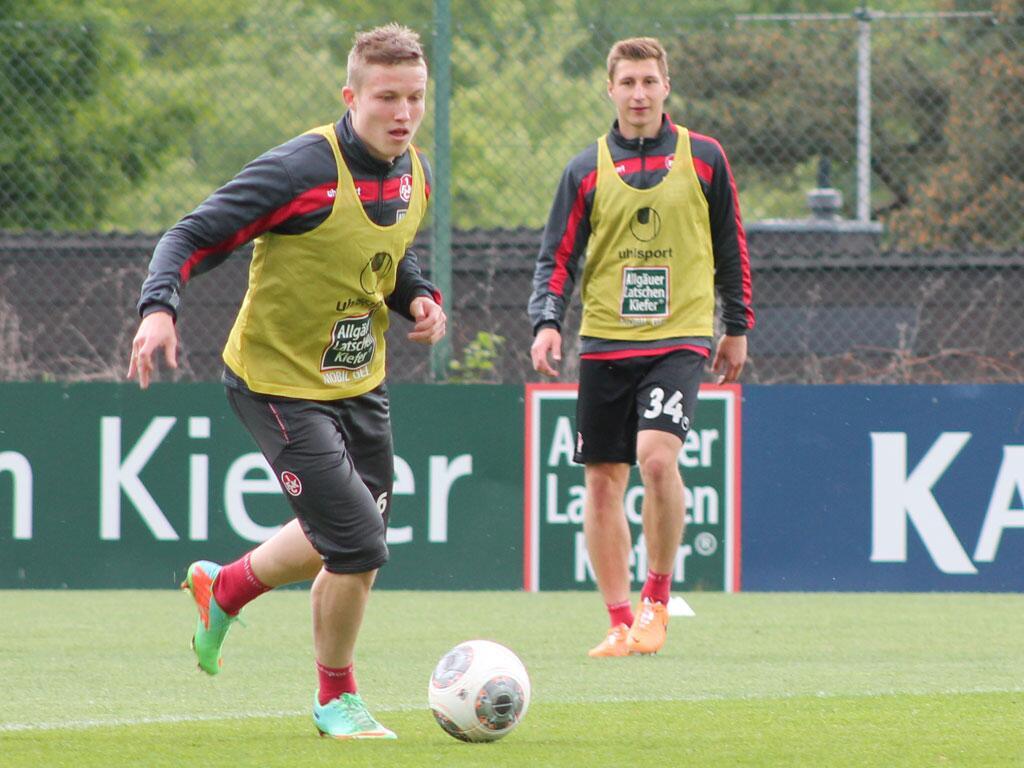 Kaiserslautern managed to teach 1860 Munich a lesson in their second game this season.

The sides winner came through Jan-Lucas Dorow, who seized on Rubin Okotie's mistake to score a well timed finish from close range.

Sandhausen were beaten by Kaiserslautern on a wet afternoon at the Fritz-Walter-Stadion.

Denis Lismayer gave Sandhausen the lead by scoring a well timed finish from close range in the sixth minute of the game. Kaiserslautern's enthusiastic centre-back Presnel Kimpembé who has become a first team regular in recent games due to other players' poor form equalised through a close range header in the 33rd minute.

Kaiserslautern's winner came through substitute Maurice Deville as he seized on Florian Hubners mistake to score a well timed finish from close range. 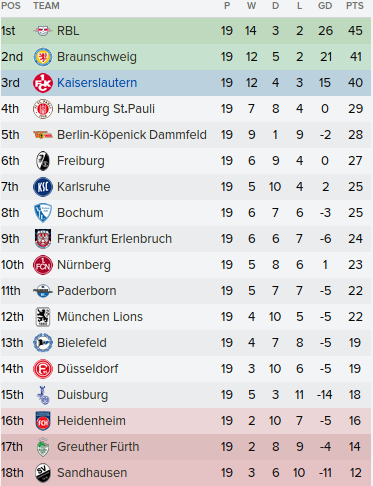 Kaiserslautern remain in third, only five points from the top spot. The top three teams are certainly running away from the rest of the pack and it seems that the promotion spots will be secured by the current top three, but who will get the automatic places?

Player of the Month: Presnel Kimpembé Kaiserslautern can today confirm they have signed Australian midfielder Luke Brattan from Manchester City for a fee of around €375,000.

The defensive-minded player left Brisbane roar at the start of the season and has been playing in the Manchester City reserve squad since, voicing that he wanted the chance at more regular football.

"We're pleased that the club has acquired a player of Brattan's calibre and hope that his experience with some bigger clubs serves him well."

Brattan has been sent on an intensive language training course so he can learn the German language quicker.

"I'm pleased to have secured a move to a club with a lot of history and hopefully I'll get the chance to prove my worth rather than being put into the reserves and left to rot. I'm not old, I still have fight in me."

It is thought that Brattan was signed due to a high number of injuries sustained to the squad during the winter break, which will hint that fans will surely see more signings to help sure up the integrity of the squad and the promotion push.

See below for examples of the 25-year-old's skills.

mgriffin2012
6 years
Should be a good acquisition mate, hopefully he can help fire you up a tier!
Login to Quote

BeanyUnited
6 years
Big fan of Luke Brattan in real life (love Australian football for the passion alone), I am sure he will be at least a decent player in a tough German division!
Login to Quote

Soze
6 years
@Griffin Hopefully he can do the job I bought him for!
@Beany Yeah, I'm a fan too but I've only recently found out about him!
Login to Quote

BeanyUnited
6 years
@Foy In my opinion to get him for the price you did is a steal, can never have enough cm in the German league!
Login to Quote

Griffo
6 years
Very interesting signing, I really do like your use of GIFs too!
Login to Quote Kaiserslautern have completed the signing of twenty-three-year-old Swedish forward Branimir Hrgota from Borussia Monchengladbach today, for a fee of around £850,000.

The striker made sixty-four appearances for Monchengladbach during his four years at Borussia Park.

Fans are pleased to have acquired a player of his calibre and upper league experience, but football fans across the world are shocked as to the fee that was paid for the player.

The Swedish youngster was interviewed upon his exit at Monchengladbach.

Today you will arrive at your new club. How do you feel?
"This is a fine club and I am pleased to have been given the opportunity to play here."

You swapped teams as Kaiserslautern paid what is considered to be a hefty fee. Do you think you could be labeled as an expensive flop if it doesn't work out?
"If things don't work out then a lot of people could definitely see it that way. With the form that Jan-Lucas Dorow is in I think I will probably play more of an attacking wide role, but we will see. I hope I do not get labeled as that."

Some pundits do not believe that Kaiserslautern's tactical style will fit you in. Do you think the side will see a change of tactics?
"I am a versatile player, I can play in many areas and do not expect to be accommodated for in such a way."

mgriffin2012
6 years
Another fantastic piece of business mate, could be a star of your team in the coming seasons!
Login to Quote

ninjaskill
6 years
doing really well in the league and a couple of good signings as well. Good luck for the second half of the season
Login to Quote