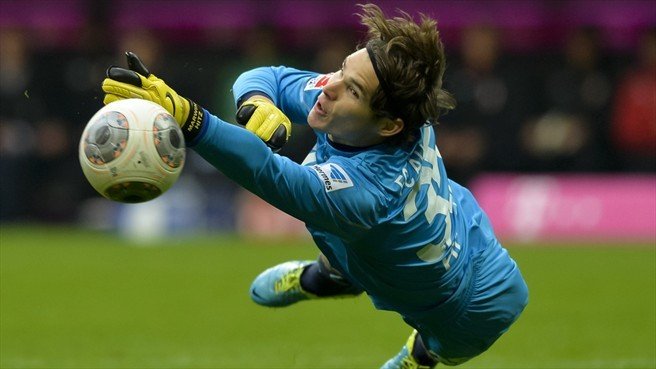 FC Augsburg have today confirmed that a trio of their first team squad have extended their stays at the WWK Arena by signing new contracts with the club. Czech Republic midfielder Jan Moravek, German utility man Markus Feulner and first choice goalkeeper Marwin Hitz have all put pen to paper on new deals that extend their stay at the club until 2018 for Moravek and Feulner and until 2021 for Hitz. Manager Dirk Schuster has said that the trio all have a valuable place in the squad and have played their part in helping Augsburg to reach 6th place in this seasons fledgling Bundesliga table.

Moravek, who is currently out injured with strained knee ligaments, was a key figure in the middle of the park with Dirk Schuster’s side liking to operate with two box to box midfielders, whilst Feulner’s experience has been key in helping players like Moravek developing their games under Schuster’s managerial reign. Marwin Hitz has taken well to his new ‘sweeper keeper’ role in Schuster’s side, keeping two clean sheets in four games and was a pivotal part of Augsburg’s 5-1 thumping of Werder Bremen last night.

It is believed that Hitz’ contract also includes a release clause stating that Champions League clubs can purchase the Swiss keeper for around £19 million, which if a deal were to happen would represent a massive profit margin should he leave the club in the near future. The goalkeeper has recently claimed how much he is enjoying life at the WWK Arena under Schuster and believes that Augsburg ”are going to under the radar this year. Nobody is taking us too seriously, and so far it’s working to our advantage.” Augsburg, who occupy the final Europa League spot in the Bundesliga play their next game at the Olympiastadion on Saturday against Hertha BSC.

Atoobie
3 years
Good stuff, getting lads nailed down for a the foreseeable future. Keep up the good work mate
Login to Quote

Fans Prediction: ”We’ve made a flying start to the season and Pal Dardai has us playing some very nice football. It would be great to see us enjoy a successful season and our start suggests we might be in for one. Augsburg though have started well too and the only time they’ve not been the better team in their games was against Bayern from what I can tell so I think a draw is on the cards here.”

Fans Prediction: ”Seven points from four games isn’t a bad return for a club like us and it does represent a positive start, when you consider the only team that has beaten us and has really tested us defensively has been Bayern. Bremen were lucky to get their goal against us and if it wasn’t for conceding then we would have had a third clean sheet going into this game. We’re scoring goals though at the minute which was a worry for some fans going into this season but we can’t complain. Hertha are having a great start to the season though, and I do fear that they’ll just be a little too strong for us so a home win is on the cards.”

Atoobie
3 years
Berlin look to be in cracking form, damnnn, but if anyone can break em its you mate

The Bundesliga campaign really kicked into life during September, starting at the WWK Arena after the International break. Despite a solid and stern defensive performance against FC Bayern, Augsburg were unable to hold Carlo Ancelotti’s side at bay as Robert Lewandowski scored and assisted as the reigning Champions ran out 2-0 winners. A second clean sheet of the season followed as Mainz held Augsburg to a 0-0 draw after a thrilling match at the OPEL Arena. In their second home game of the season, Augsburg secured their first points at the WWK Arena as two goals from Jonathan Schmid helped Die Fuggerstadter to an easy 5-1 win over four times Champions Werder Bremen. Augsburg were unable to make it two wins on the bounce though as surprise package Hertha Berlin overcame Dirk Schuster’s side with a late goal to win 2-1 at the Olympiastadion, but a late goal at the WWK Arena against Koln saw Augsburg secure a point in a 1-1 draw against the visitors. 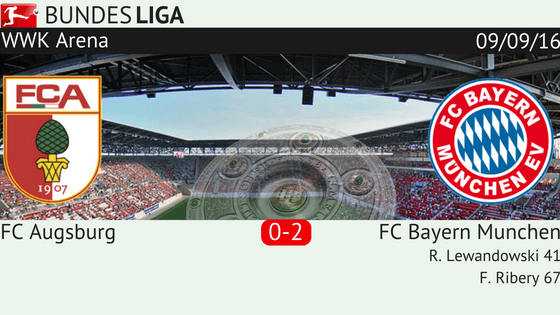 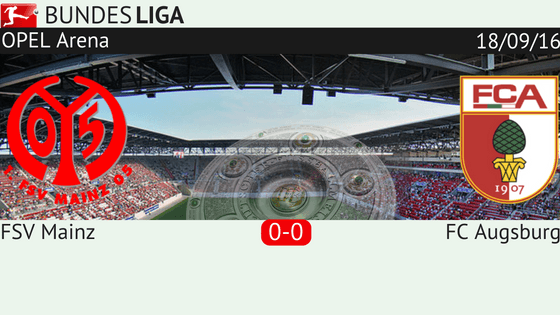 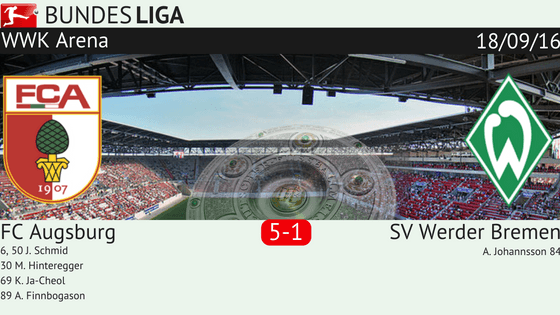 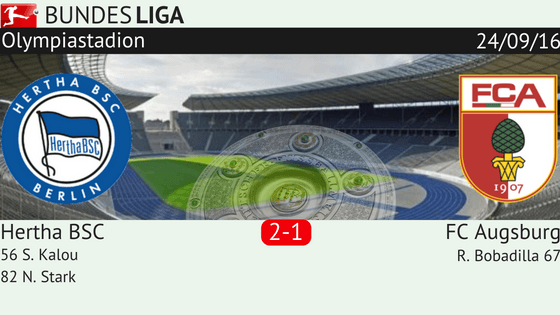 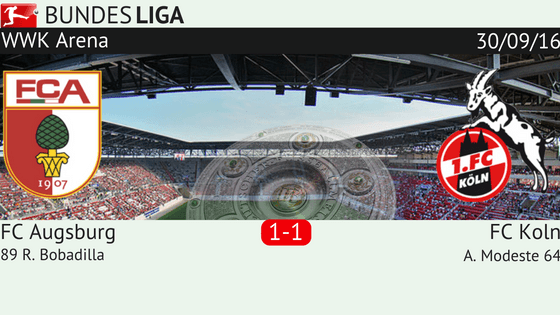 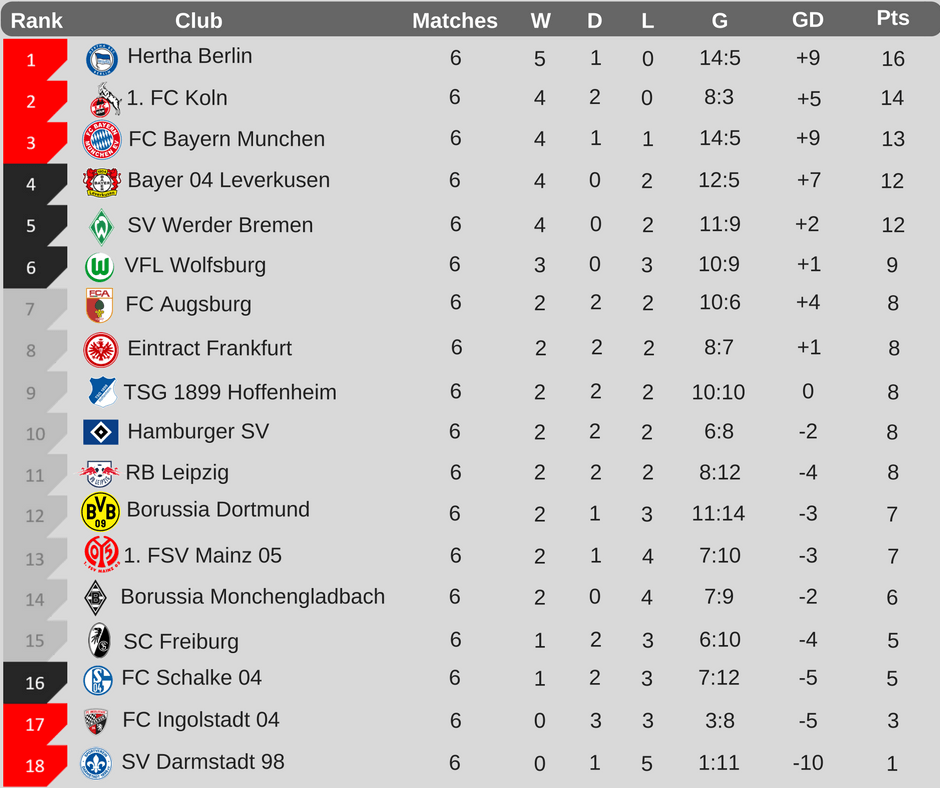 After a mixed run of form in September, Jonathan Schmid was the standout player, scoring twice in the 5-1 thumping of Werder Bremen, but his performances all round this month have been of the highest level and has given Dirk Schuster food for thought in the winger positions.

After a mixed bag of results in September, Augsburg will be looking to try and gain some consistency over the course of October. A trip to a Schalke side struggling under former Augsburg manager Markus Weinzierl will be an eagerly anticipated clash at the VELTINS Arena before Eintracht Frankfurt visit the WWK Arena a week later. The following Wednesday, Dirk Schuster takes his Augsburg side back to former side Darmstadt in the DFB Pokal 2nd round, before Augsburg round off their month away at Hoffenheim.

It’s been a mixed month on the pitch. A thumping win over Werder Bremen really showed what this side is capable of when it gets the wind in its sails and we have to embrace that ability a bit more consistently. The performances against Hertha and Koln at the end of the month deserved a better set of results but as the players adapt to our system mistakes like the one Marwin Hitz and Georg Teigl made against Koln will happen. Nobody has allowed their heads to drop after the defeat to Bayern and on the whole I am happy with how this season is progressing so far.

JohnWarrington
3 years
Not a bad month there considering the opposition. In a decent spot in the table too
Login to Quote

MJK46
3 years
Your monthly review looks like something from a mobile version of a sports website. It's beautiful and easy to read
Login to Quote

Hellsdoom
3 years
That late goal vs Koln may be vital, you have played against 4 of the top 5 sides and got decent results, so there is hope for solid season.
Login to Quote

Yeah not a bad month but could definitely have been better

Haha took a lot of effort so cheers man, glad you like it!

Haha it felt so good when that went in! On a relatively good run of form so hopefully we can keep it up!
Login to Quote 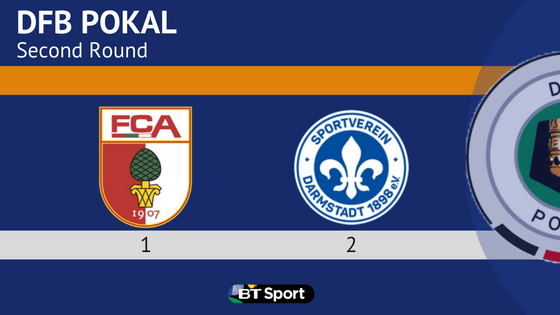 At the WWK Arena, it was Dirk Schuster’s former side SV Darmstadt who took the spoils from their clash with FC Augsburg in the Second Round of the DFB Pokal. Despite a positive performance from Augsburg they were inevitably undone after going down to ten men by Sven Schipplock’s accurate finish after he managed to outmuscle Jeffrey Gouweleeuw in the Augsburg defence.

It was perhaps the home side who were having the better of the game in the first half but ultimately the game turned when Georg Teigl was sent off for his second yellow card in the 39th minute wich sent Augsburg down to ten men for over 50 minutes of the tie.

However despite what the scoreline suggests, it was Augsburg who took the lead at the WWK Arena as Philipp Max powered a brilliant free kick into the top corner after only 3 minutes to give the home side the lead. The lead lasted only 15 minutes though as Andreas Luthe tipped Mario Vrancic’s free kick onto the crossbar with the loose ball falling to Artem Fedetskyi who made no mistake in slotting the ball home to make it 1-1.

From there the game levelled out with both sides looking particularly effective going forward and both dangerous on the break. Teigl though, will perhaps be viewed negatively for his red card as already on a yellow, a cynical trip on Mario Vrancic meant he was left with no choice but to leave the pitch early. From there Darmstadt took the ascendancy as Augsburg shifted shape to try and keep themselves in the tie and in the 49th minute Sven Schipplock was played through on goal and made no mistake in slotting past Luthe to make it 2-1 and ensure that Darmstadt took their place in the Third Round of this years DFB Pokal.

Griffo
3 years
How are you finding the Bundasliga so far? Is there any teams which you have grown to love/hate?
Login to Quote

Yeah wasn't easy to take and was incredibly frustrating!

Love the Bundesliga already man! But yeah Bayern are the obvious ones but then they play good football and its not as frustrating to lose to them as it is to PSG

Losing to Darmstadt though appear to be becoming my bogey team!
Login to Quote

Fans Prediction: ”It feels we’re having a comfortable start to the season and we look to be set for a mid table finish type season which after last season is acceptable. In Julian Nagelsmann we have a very young manager who is learning his trade but if he can learn at a rapid rate and progress the club that would be fantastic. We have a good squad as do Augsburg but I think we should be taking all three points here to be honest.”

Fans Prediction: ”We should have done better against Darmstadt in midweek and if Georg Teigl hadn’t have been sent off I think we would have won that tie and our last five results would have looked a bit more positive. We were very effective against Frankfurt last time out though and if we can hit those levels against Hoffenheim this weekend we will win the tie I think.”