Jack
3 years
It's OK for the people internally involved in the club to know their vision but it's also arguably more important for the fans to know it too, so they can scrutinise if they go off-course. Liked this update pal.
Login to Quote

ScottT
3 years
A lot of positives in these last few updates. Hopefully it will continue to be a key theme going forward.
Login to Quote

Griffo Going to be a lot of work

ScottT Thank you
Login to Quote 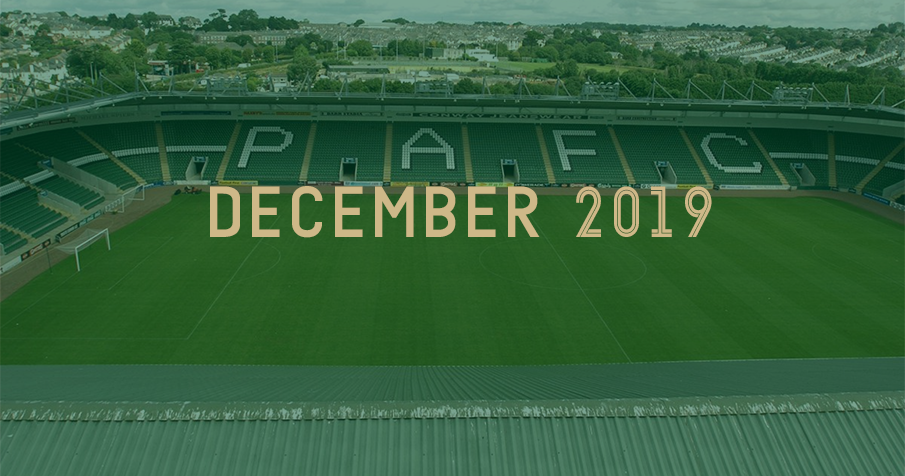 Plymouth finish off 2019 and the decade in an extremely positive position, however a few bad results during the month caused some worry. With two losses against Cambridge and Cheltenham the gap between first and second closed in a bit with a three point difference. Yet the club finishes the decade with an impressive win against Stevenage.

In cup competitions, the club continues to defy expectations with a spectacular 5-2 victory over Newport in the EFL Trophy Second Round. Next up is a rematch against Southampton's U-23 squad. Previously we defeated them in penalties in the group stage back in September. At this rate Argyle is looking to be a favorite in winning the competition.

In player news Jose Baxter had turned around and decided to re-sign with us. Due to some extra playing time and how well the club is doing he decided to stay. Also Zak Rudden's loan was extended and currently the club is looking to make Josh Grant's loan permanent.

The start of 2020 will be a very busy month between the transfer window opening, the full opening of the Mayflower Stand and eight matches across three competitions. Argyle begin the new year hosting Swindon Town on New Years Day.

Proceeding the New Years Day match the club will be away for the next three matches; on 4 January we travel to Crawley to face Crawley Town in the FA Cup Third Round, then we have back to back league matches against Scunthorpe on the 7th and Carlisle on the 11th.

The club returns home to face Southampton U-23 in the EFL Trophy South Third Round on 15 January. The rest of the month sees the club host Mansfield on the 18th and Crawley Town again at the end of January on the 28th. Between those two dates we travel to face Stevenage on the 25th. 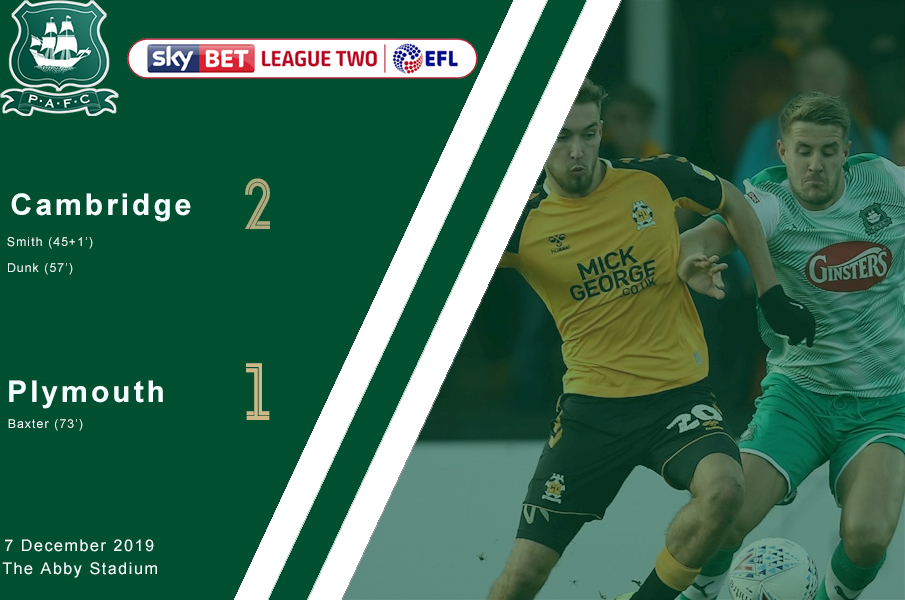 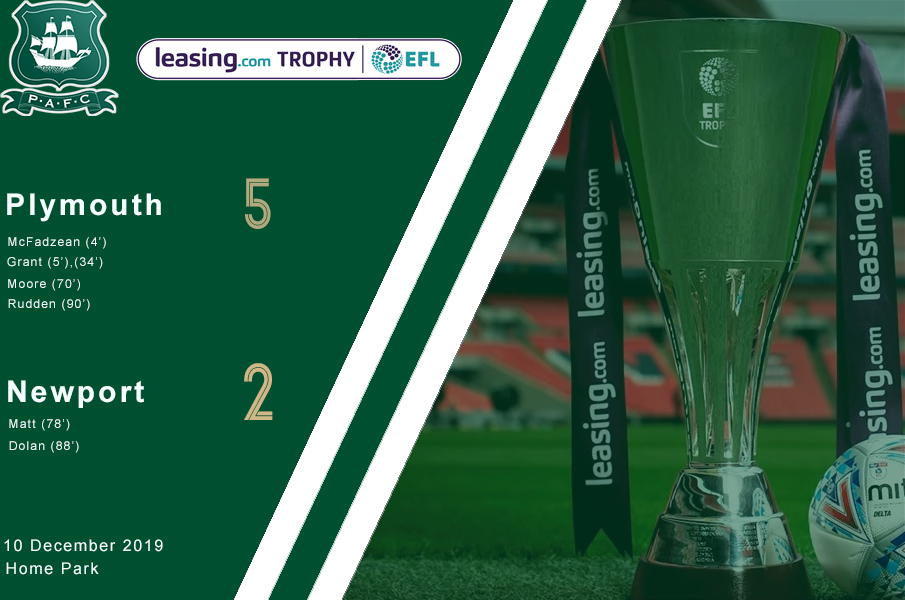 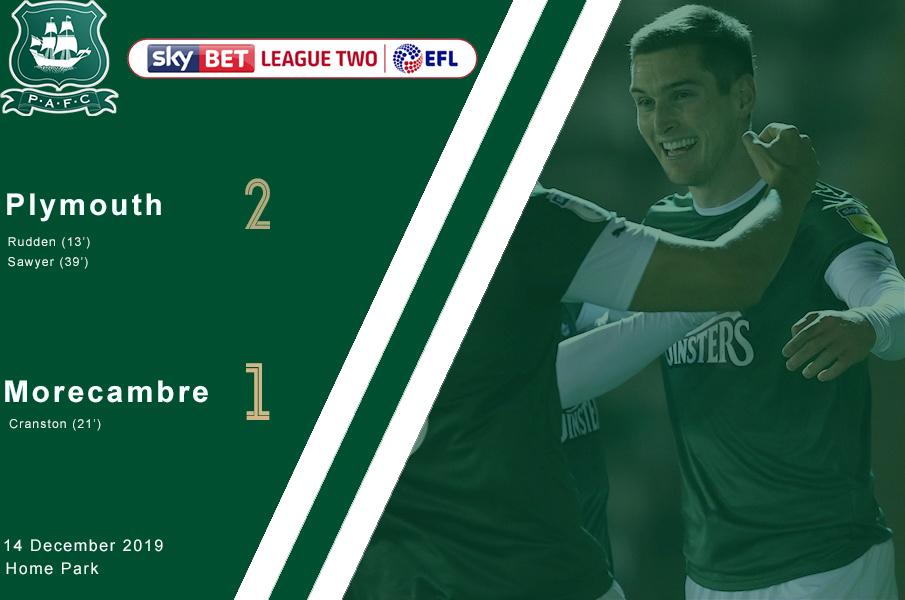 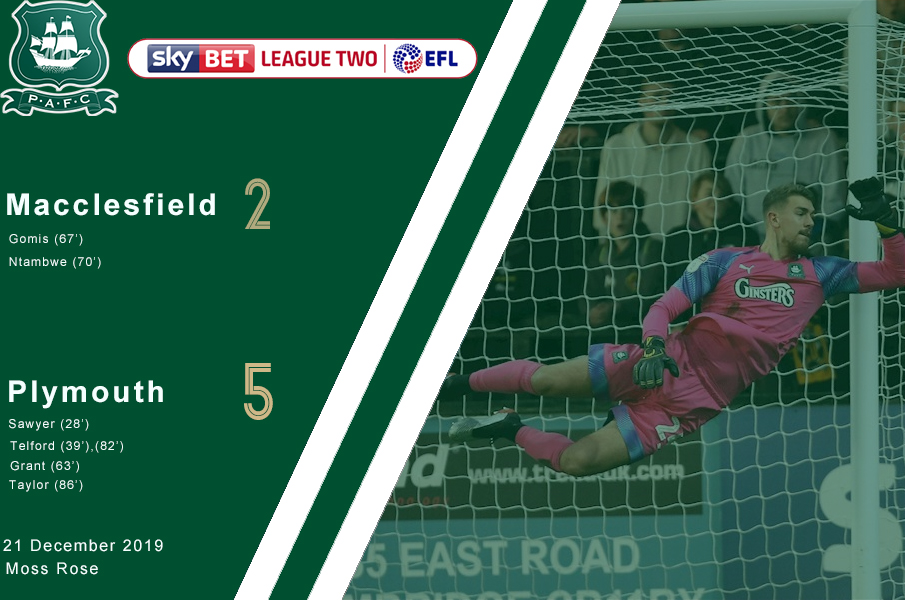 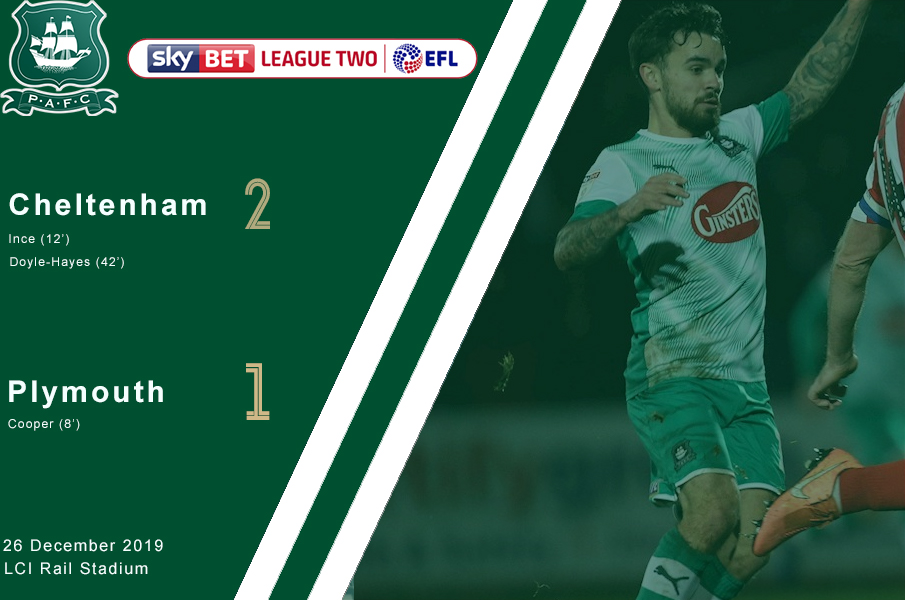 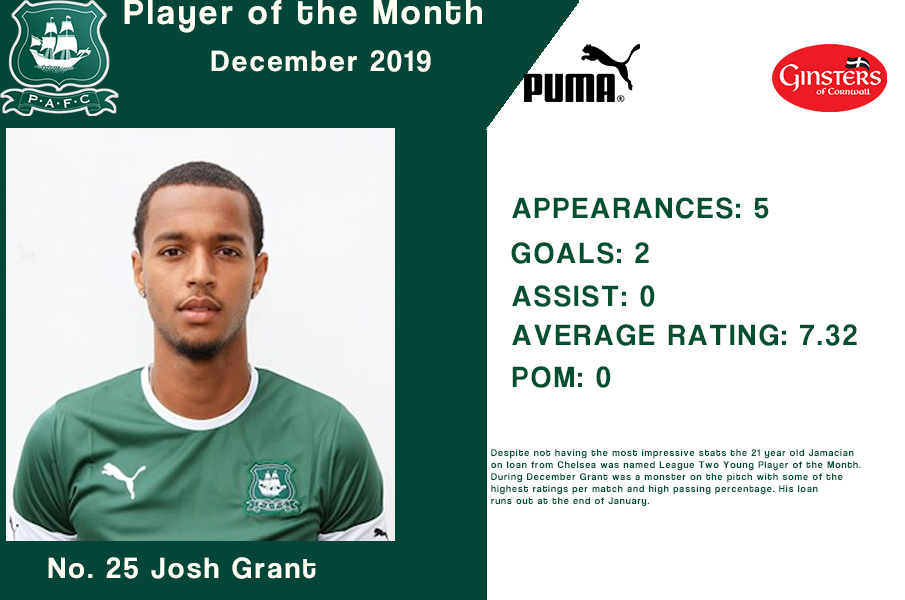 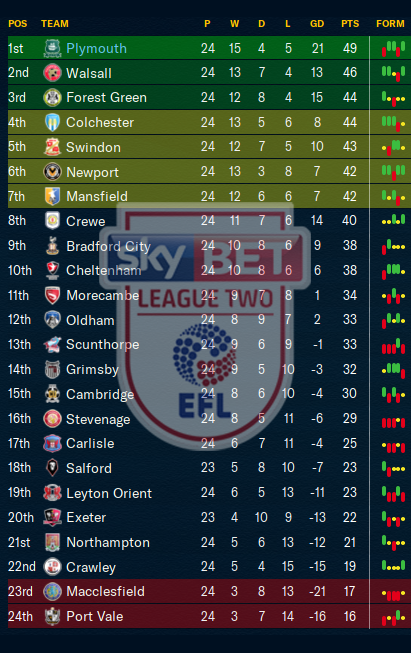 TheLFCFan
3 years
Another top top month with only a couple of losses, can't be disappointed in a tough winter period. The fan forum certainly suggests ambition is high at Plymouth!
Login to Quote

TheLFCFan Rotation is the key

ScottT The 20's will be the decade of Argyle. We will make the Leicester championship look like a joke
Login to Quote 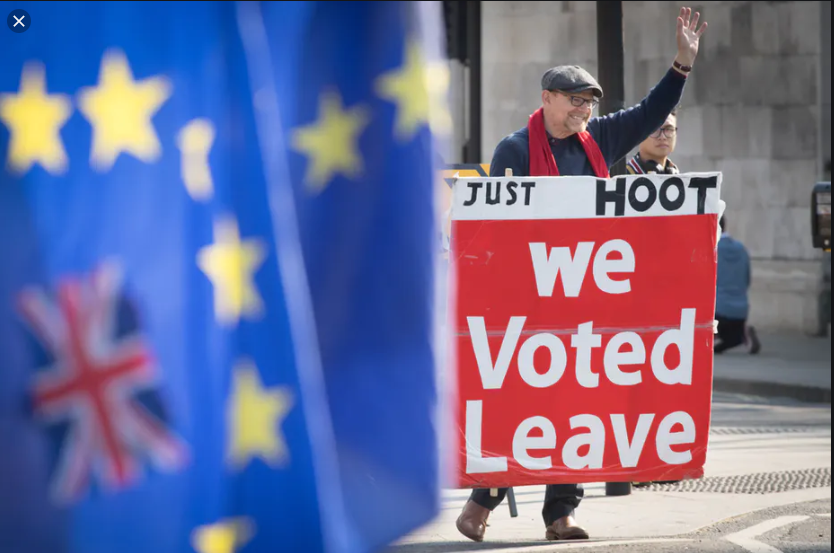 
On New Years Day amid a slew of matches the FA announced what will be happening in the near future due to Brexit.

From Thursday 31st December 2020, the four major FA's of the UK will use a 17-foreign player limit. A new work permit system will also be in place.

Home grown players will not be registered with the new rules allowing the nations to further develop talent.

European Union players already in the UK will be given special status to allow them to not be treated as non-foreign and not work permit is required.

Finally as part of the break away players from the Republic of Ireland will not be treated as non-foreign.

This will indeed cause a lot of talk from the supporters all the way up to the owners of the clubs. We were able to get a response from Plymouth Argyle; "This will take time to adjust but our club is looking to invest on youth in the future and this could be a big help with improving the club with a vision for this decade", said an unnamed coach of the Argyle First Team.

We will see what comes of this. Could this make British Football Great Again?
Login to Quote

ScottT
3 years
It shouldn't make much of a difference for sides like you for the time being.
Login to Quote

TheLFCFan
3 years
This is great in terms of clubs in the top divisions developing more homegrown talent. However, it would be a worry for clubs who are lower down the leagues with the 'big boys' poaching their top talents!
Login to Quote

MJK46
3 years
ScottT Agreed, this will be something to adjust to if I make it to the Premier League 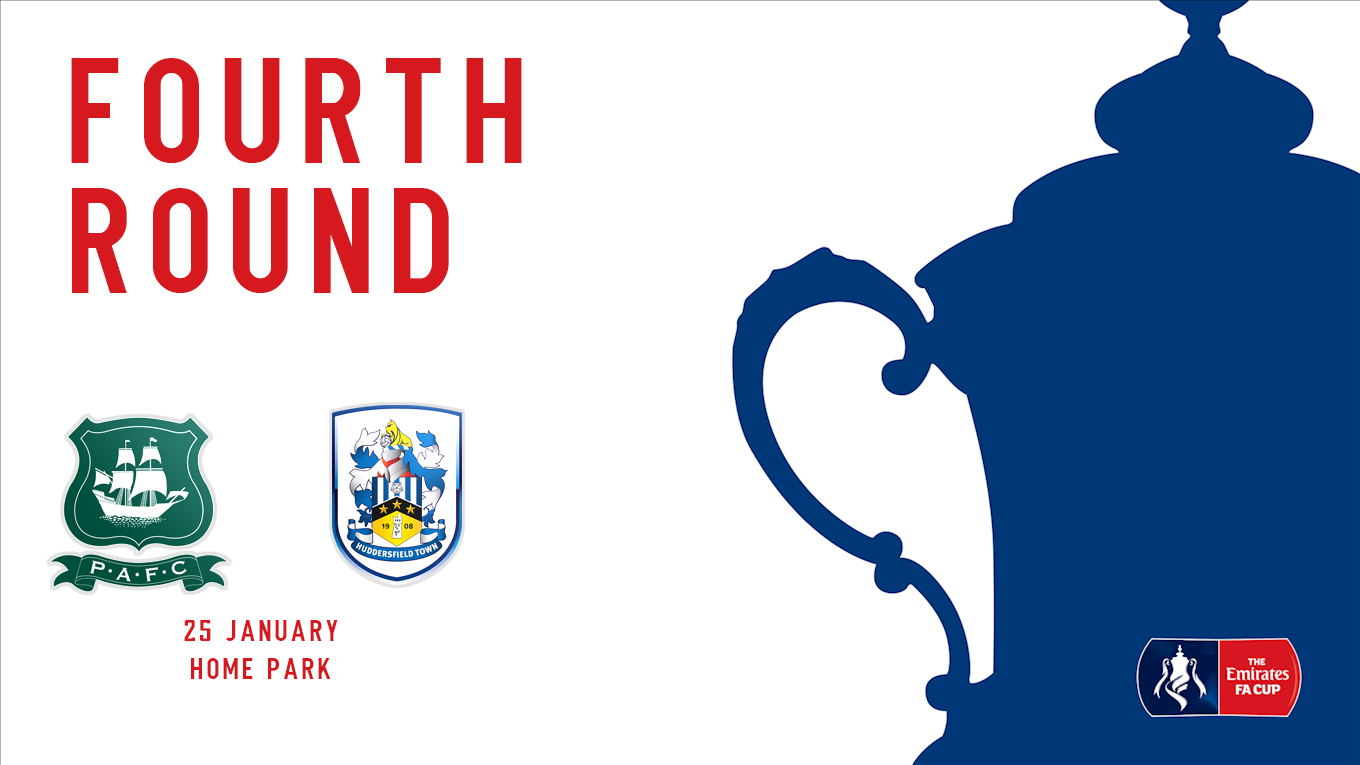 The magical FA Cup run continues for Plymouth as they were drawn to face Championship side Huddersfield Town. The draw occurred hours after defeating fellow League Two side Crawley Town by a score of 2-0.

The draw gave the Pilgrims the advantage as we were drawn as the home side. With this kickoff will occur at 3pm on 25 January.

This match-up will see Plymouth face their hardest competition yet, as Huddersfield are two leagues above and the biggest club faced to date.

It should be an exciting day as the club is projecting a close to sell out crowd.

For the Terriers their road to the fourth round was shorter, previously in round 3 they had defeated Birmingham City by a score of 3-2.

Historically the two sides have meet each other 52 times since 1920. Huddersfield holds the advantage with a record of 25-14-13. In their last meeting Huddersfield won 3-2 back in League One, this match was
in 2011.

Due to this meeting the League Two match-up against Plymouth and Stevenage will be moved to 21 January.
Login to Quote 
Plymouth Argyle have signed Arsenal midfielder Matthew Smith on loan until the end of the season.

The 19-year-old signed a professional contact back in February for the Gunners.

He could make his debut for the Pilgrims on the 18th at home against Mansfield. With the upcoming away trip to Carlisle he will not have to to be part of the squad and will train with the U-23's until the club returns.

He also will not be used in the Leasing.com Trophy 3rd Round match-up against Southampton due to being cup tied.

Smith has made two appearances this year in cup play. He scored a goal after coming a as substitute in the EFL Cup Third Round match against Blackpool. His other appearance was with the Arsenal U-23's in a group stage match against Ipswich.

"He gives us a bit more presence in midfield so I am really pleased to get him," boss Michael Carrick told the club website.

This loan signing is the first of the transfer window outside of extending a few loans of players from previously in the season.
Login to Quote