A few days ago it was announced that we would face either Gloucester City or Barnet in the FA Cup First Round. Gloucester City would win the match by a score of 1-0 in a replay due to the previous match being a draw.

Gloucester City are currently 22nd in the Vanarama National League North and have drew and won their last two league matches.

In the FA Cup Gloucester have beaten Atherton Collieries, South Shields and Barnet. The later two matches had to end with replays.

Manager Michael Carrick said this about the draw;"We did get a favorable draw but we can not get complacent, Gloucester has had a good FA Cup and took their last two opponents to replays. We must not overlook them."

Last season under manager Derek Adams the team made it to the second round where unfortunately they lost to Oxford United 2-1.

Ticket and tailgate details will be published in due course.
Login to Quote 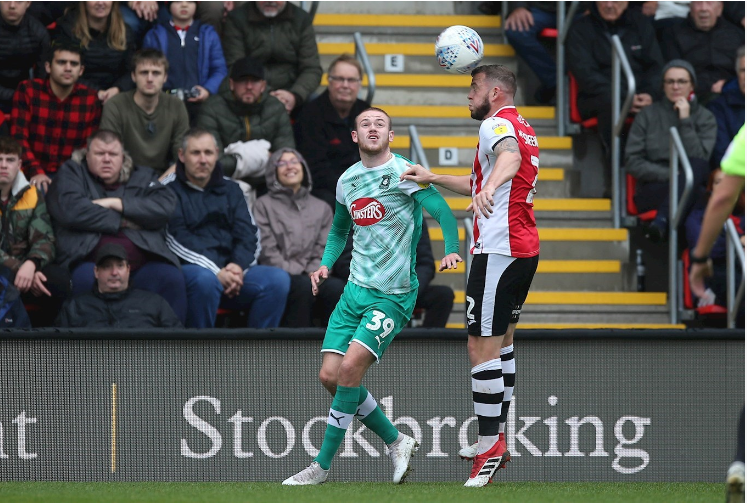 
Plymouth earned bragging rights in the Devon derby with an emphatic 3-1 win against their county rivals Exeter.

The Pilgrims went into the game having lost against Carlisle and drew Leyton Orient, while Exeter were coming off of two straight scoreless draws against Cambridge and Scunthorpe.

But Matt Taylor's Grecians were no match for Michael Carrick's Pilgrims, who never looked back after Byron Moore had given them a second-half lead from the penalty spot in the 52nd minute, after Exeter's equalizer from Jordan Tillson in the 67th minute it would be all Plymouth.

With the score tied entering the final minutes of the day the Pilgrims were able to take advantage of a few desperation plays. In the 90th Dominic Telford would score his 11th league goal and Zak Rudden would follow with his own during the dying seconds of stoppage time.

For it was an exciting day as the traveling supporters were able to see their team win their fourth match in all competitions in the Month of October and fourth of five away from Home Park. 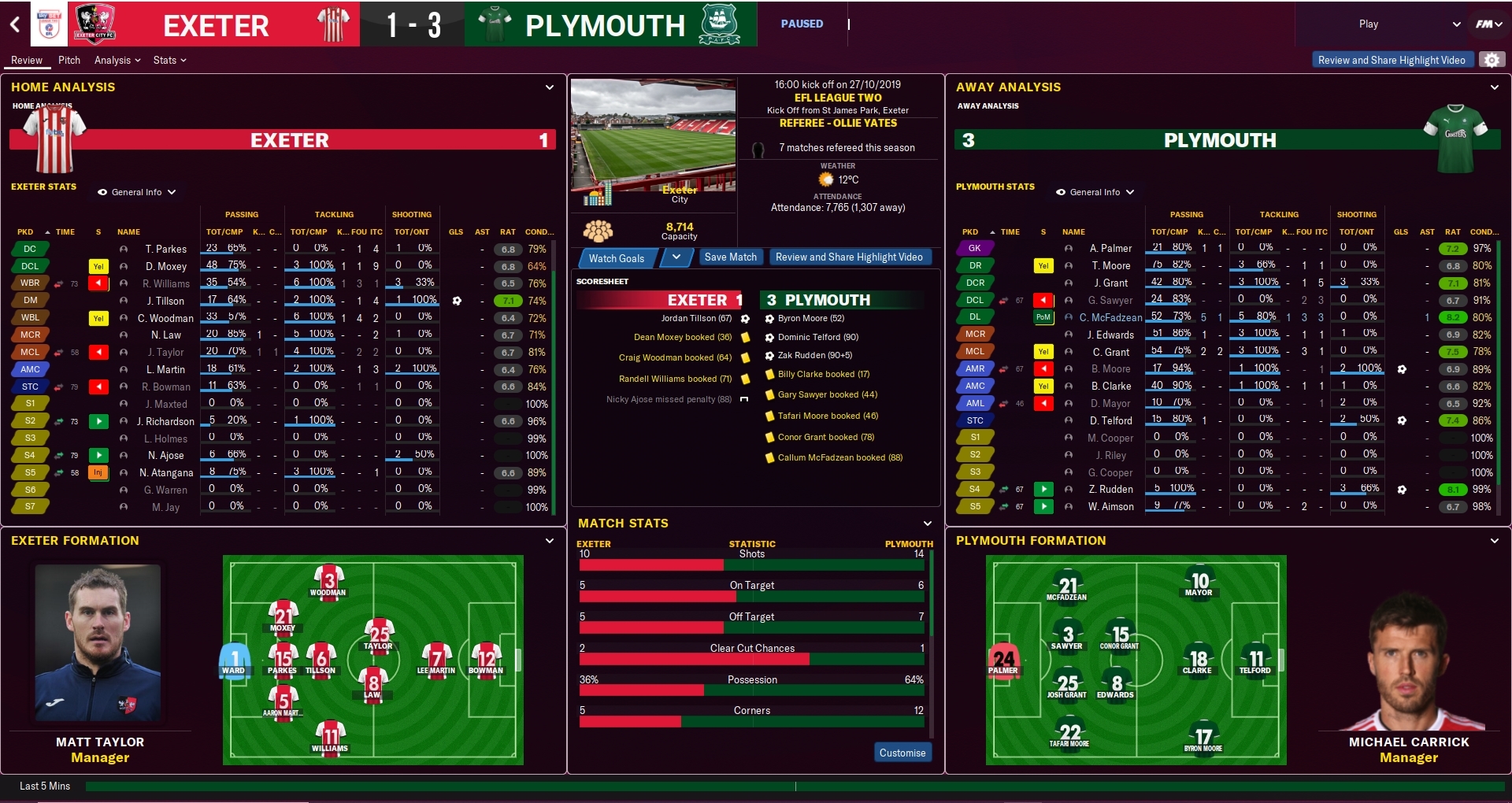 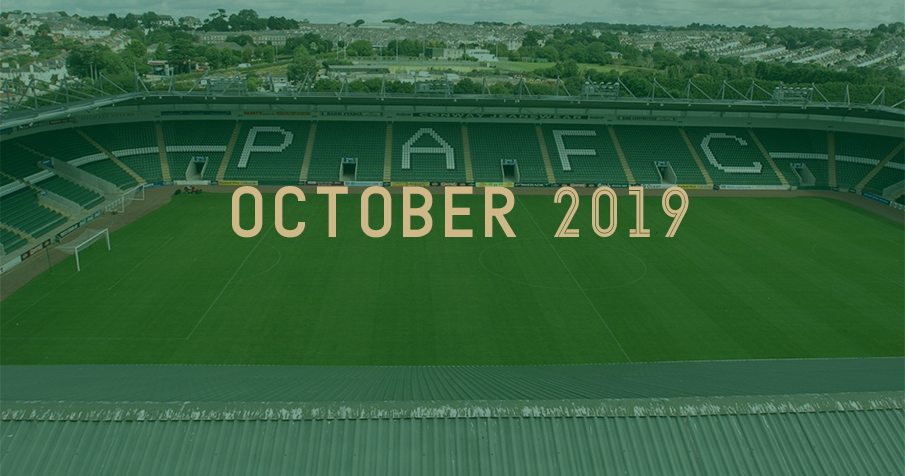 It was a pretty decent set of results for Plymouth in October, starting with a 2-0 victory against Scuntrope, Dom Telford finally got his grove back with scoring a goal for the first time in over a month. We would continue on with a victory over Swindon, loss against Carlisle, draw against Leyton Orient and a massive 3-1 victory over rival Exeter.

With a 4-1 victory over Cambridge Plymouth has cemented a place in the knockout stages of the Leasing.com Trophy. Up next will be the final match against Forest Green who are currently in last place in our group.

During this time the club has been starting to look for new players in the upcoming window. Currently one target is Brandon Kavanagh of Shamrock Rovers.

In the upcoming month it will be quite busy as three different compositions will be played and they are, the FA Cup, Leasing.Com FA Trophy and League Two play. Starting on 2 November Grimsby at home. After that we host Gloucester in the FA Cup. Next are back to back matches away at Forest Green, the first on the 12th is for the FA Trophy and the second a week later in the league. Finally the month ends as Bradford City visits on 23 November. 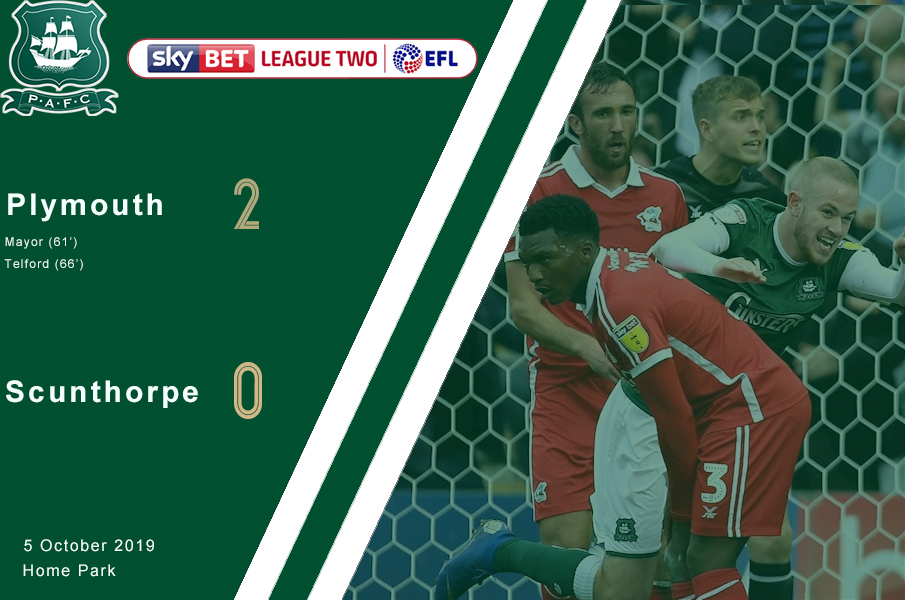 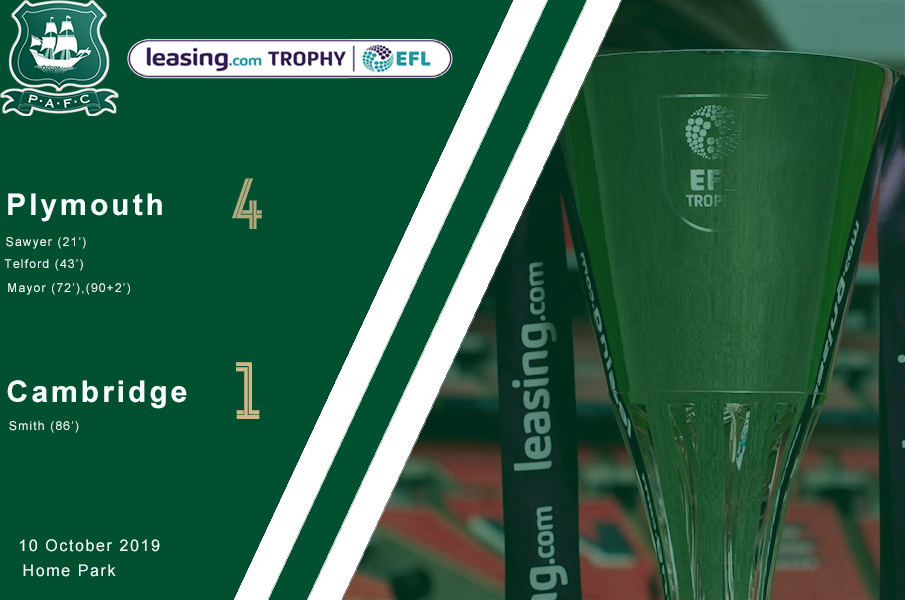 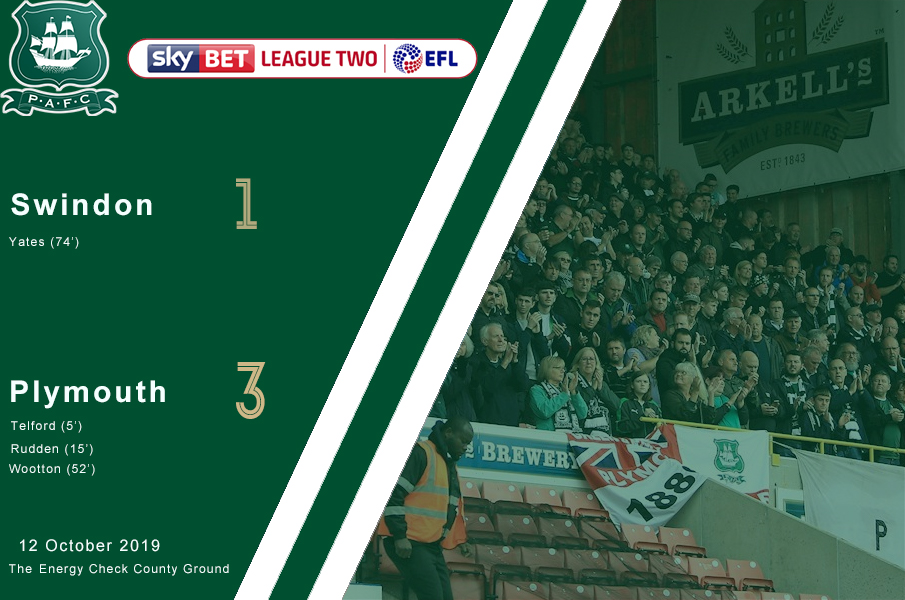 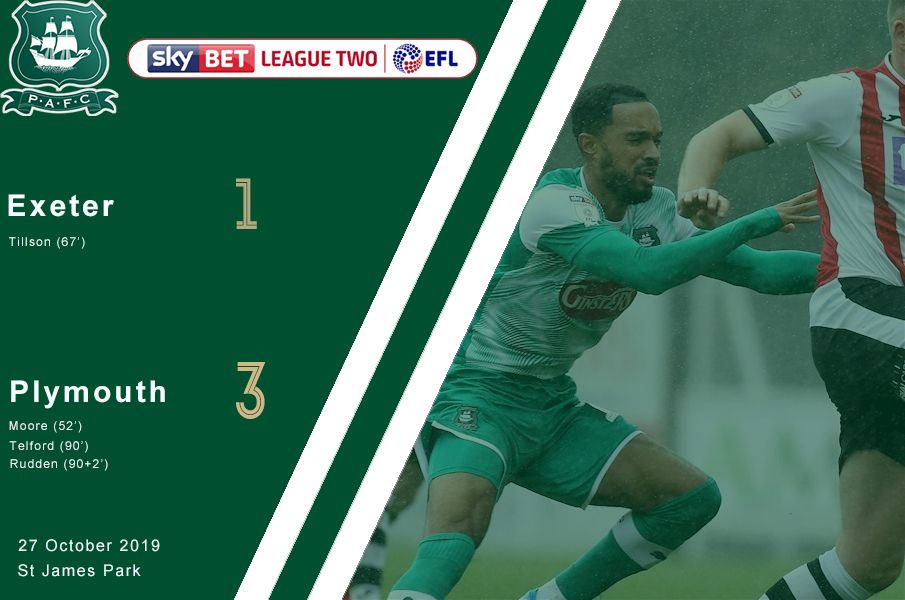 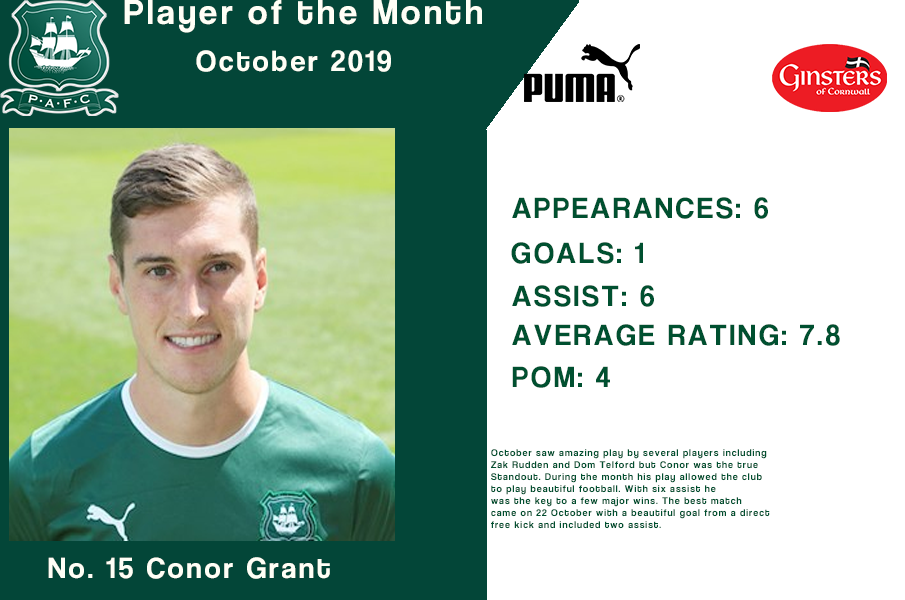 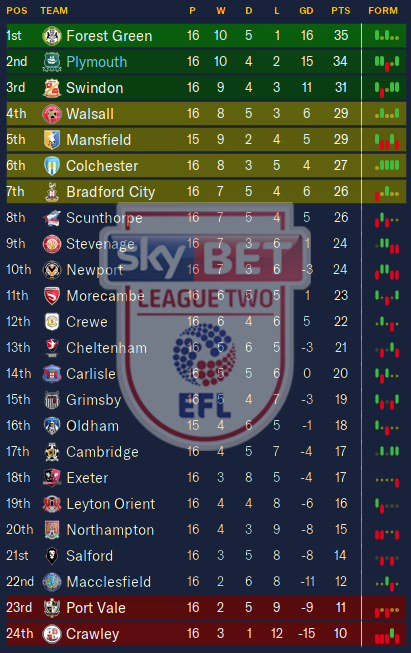 Jack
3 years
A terrific record this month! Some spell for Grant as well with helping out with his assists.
Login to Quote

Zak Rudden wins two awards for the month of October

The young striker on loan from Glasgow Rangers has had to be patient in having more playing time, but the reward came with a hard-working October for Argyle. With a change in tactics allowing two Strikers Zak Rudden was able to produce at the highest level.

Zak, 19, has made the long journey south from Glasgow on a half-season deal, with an option to extend. His move to Home Park follows on from an eye-catching loan spell at Falkirk last season – in which their manager Ray McKinnon described Zak as “phenomenal”.

His goal scoring exploits so far for Argyle included scoring on his debut versus Crewe Alexandria and netting braces six other times since the League 2 season began, four were scored in October.
Rudden said, “The manager talks about the strikers producing and I’ve been working really hard. He is very demanding, like any manager, and that’s good because he’s got standards.”

With Zak’s loan expiring here in a few months the club is looking to extend for the remainder of the season.

“He (Zak) has been a joy to watch and has really shown what he can do, I hope we can come to an agreement to where he can stay, but it will be hard as he could totally help Rangers for the remainder of the season,” said manager Michael Carrick a week ago after the two goal performance against Leyton Orient.

Keep an eye out here in the coming weeks to get updates on the Rudden loan. Hopefully we can bring news of an extension.
Login to Quote

Griffo
3 years
How about the Rudder guiding Plymouth to the top of the table!
Login to Quote

TheLFCFan
3 years
Good to see Telford back in the goals, scoring in every game apart from one. Hopefully he can keep that form up and you can overtake that one point gap on Forest Green. Playing them back to back will be interesting to see, hopefully you can get the better of them!
Login to Quote

ScottT
3 years
Glad to see the young lad is thriving. Form is on the up.
Login to Quote

Jack
3 years
Looks like he's leading the surge! Shame he is only on loan and not a permanent fixture at Plymouth but that should drive you to get the most out of him!
Login to Quote

MJK46
3 years
Griffo He has been a joy to watch

ScottT Going to try to keep him

BEFORE joining Argyle, Dominic Telford had one goal in the FA Cup show for a career’s work. On Saturday afternoon, his two goal game of an increasingly prolific season sent the Pilgrims beyond their lower-tier opponents and into the second round of the Emirates FA Cup.

The scoring would begin six minutes in when Telford would score his first of two off of a volley into the net. Early on it was Argyle match to lose. He would end of scoring his second a little while later in the twenty-fourth minute.

For the majority of the day Plymouth would dominate the lower-tier side in many categories. With the debut of the 4-3-2-1 formation, Argyle dominated with 336/399 (84%) passes completed, 71% of the game in possession 33/48 (69%) of headers won. With the new tactic in place the team was able to control the tempo of the day.

Argyle looked the more threatening, though, and midfielder Conor Grant was able to add his second goal of the season. He scored a well placed header just inside the box after fellow Grant, Joel crossed the ball right to Conor and the Gloucester keeper had no time to react.

With the team dominating in every category Gloucester were getting both tired and frustrated due to the play of the home side. The visitors would accumulate four yellowcards before the end of the first half and a warning from referee Brett Huxtable to control the players.

A number of substitutions, misplaced passes and fouls punctuated a stop-start period in the second-term, as the Pilgrims played it with a slower tempo. Meanwhile, for all of their territory, Gloucester failed to conjure up any opportunities of note until the dying minutes of the night.

The clean sheet would not last for Plymouth as Gloucester would score off a corner in the eighty-seventh minute. Striker Marlon Jackson was at the right place at the right time.

With a 3-1 victory Plymouth moves on to the second round and will face either Spennymoore Town or Stockport County. This match is set for a 3pm kickoff on 30 November. At this moment it has not been decided who will host the match. 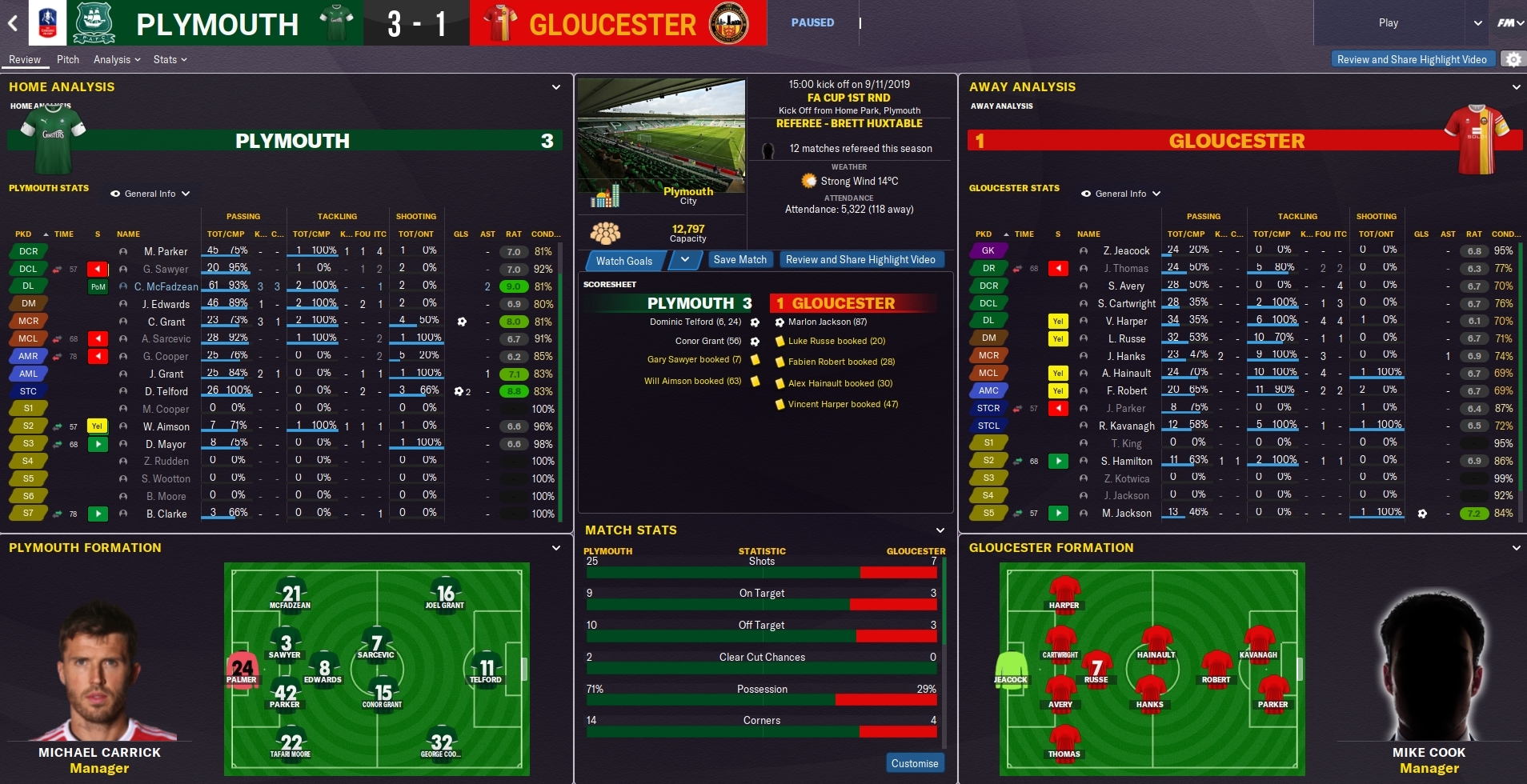 Justice
3 years
Good to see you back writing, you've taken the return in your stride. The standard of the story has been very good so far, I look forward to reading more.

You're in a strong position in the league. Top spot should be your target but I'd imagine you would settle for anything that includes promotion. The win against Gloucester might have been a routine one but a very important one for the club, financially. The second round, and hopefully future rounds, can provide a windfall which will aid the club in the short and long terms.
Login to Quote