TheLFCFan
3 years
A tough tie against a former Premier League side, however, it should be a good test of the squads ability. A nice addition to the squad as well with the loan of Smith, hopefully he can be a good player for you!
Login to Quote

ScottT
3 years
Huddersfield are decent opposition, but naturally I think supporters would have been hoping for better opposition in the fourth round of the competition, especially after only drawing Crawley in the previous round. It's not an impossible task for a side with confidence, though.
Login to Quote

Jack
3 years
Huddersfield are no doubt a tough side, but no doubt from here on in you're just in it for the FA Cup ride!
Login to Quote

Eoin97
3 years
A great season so far for Plymouth! On top and enjoying life in league Two, with some very decent signings coming in. Hopefully the Brexit ruling system doesn't effect you too much, I doubt it will tbh. And Huddersfield an interesting draw in the EFL Cup. Good luck!
Login to Quote

MJK46
3 years
TheLFCFan It will be a good test, despite being two leagues below I will use this as a test for next years as a way to see if we can compete in League One or will there need to be a total makeover

Jack Yeah totally the money and exposure is great, hopefully we are getting people in America to watch our run haha

Eoin97 I feel the club is in a better spot than what they were in two years ago in real life, as of now I don't see us failing in League One next season, the money from this year is helping shape the future
Login to Quote Plymouth Argyle edged to a narrow 3-2 win over Huddersfield Town in the FA Cup fourth round at Home Park, but not before they were comprehensively outplayed for large periods by the eight placed Championship side.

This match saw Plymouth boss Michael Carrick take an extreme risk by deploying a 4-2-2-2 for the first time this season, "This was extempore risky and we had practiced a few weeks now, we have been looking for the perfect two striker tactic that gives both Dom (Telford) and Zak Rudden a chance at banging in goals while on the pitch at the same time'" said Carrick after the game.

An error from Huddersfield's Christopher Schindler allowed explosive striker Dominic Telford to score a close range from the bottom corner. Goalkeeper Alex Palmer, who just signed a permanent move to Plymouth, put on a show stopping Huddersfield from a counter attack in the first half.

Knowing that there was a huge gap due to the counter attack and the bench, manager Michael Carrick decided to change the tactic to a 4-2-3-1, this was a momentum changer for the Terriers.

After Plymouth adjusting the tactic and a substitution of Danny Mayor for Trae Coyle, advanced forward Adama Diakhaby scored on a header in the 57th minute. Two minutes later Huddersfield scored their final goal from a long shot from Steve Mounié.

The Plymouth fans and team were stunned. For the next several minutes Plymouth was adjusting to what Huddersfield was throwing at them. The score would have been higher had Palmer not been on his game today.

After a few substitutions and adjustments, Carrick ordered his men to give it all they could by going all out on attack. This move paid off.

For Coyle this was his FA Cup debut and he made the most of it. As the clock was winding down in the 80th minute Coyle woke up the crowd as he equalized from just outside the penalty spot with an aggressive shot. The Pilgrims were about to force a replay. This will make the new loan signing a popular one in Plymouth

With five minutes before the end Dominic was not ready to go home with a draw. He would score the game winner in the 85th minute, with a run and goal that was reminiscent of Gareth Bale's goal from the 2014 Copa del Rey final in 2014. (seriously if you don't know what I am talking about here it is: Bale Goal)

The dream run continues for Plymouth as they find out who they will face in two days in the fifth round draw. ScottT
3 years
What a result. The magic of the cup is alive and kicking!
Login to Quote

Justice
3 years
A major result for the club! Big steps have been taken!
Login to Quote

Justice It is what is needed, Plymouth will be a name that will be popular soon The start of the new calendar year was an extremely busy month with nine games played in three compositions.

Despite a so-so month the club is holding onto first place by one point. Victories came against Swindon, Scunthrope, Carlisle and Stevenage. There were two costly losses against Mansfield and Crawley Town that were the reason a wide gap earlier in the month has closed down. At one point mid-month Plymouth were 5 points ahead of second place.

This was also a busy month in cup play. In the FA Cup Plymouth were featured twice in the month, with both victories we advance to the fifth round. Our next FA Cup match is not until March at Crystal Palace. Finally we get to face Coventry next month in the south quarter-final. We had defeated Southampton's academy side for the second time this season.

In transfers at the time of this update the club signed goalkeeper Alex Palmer to a permanent deal, extended Josh Grant's loan from Chelsea and added two Arsenal players on loan.

Finally February looks to be another busy month with seven matches across two competitions. Newport, Crewe Alexandria and Cambridge will be visiting Home Park while the Pilgrims visit Colchester, Salford, Coventry and Bradford City 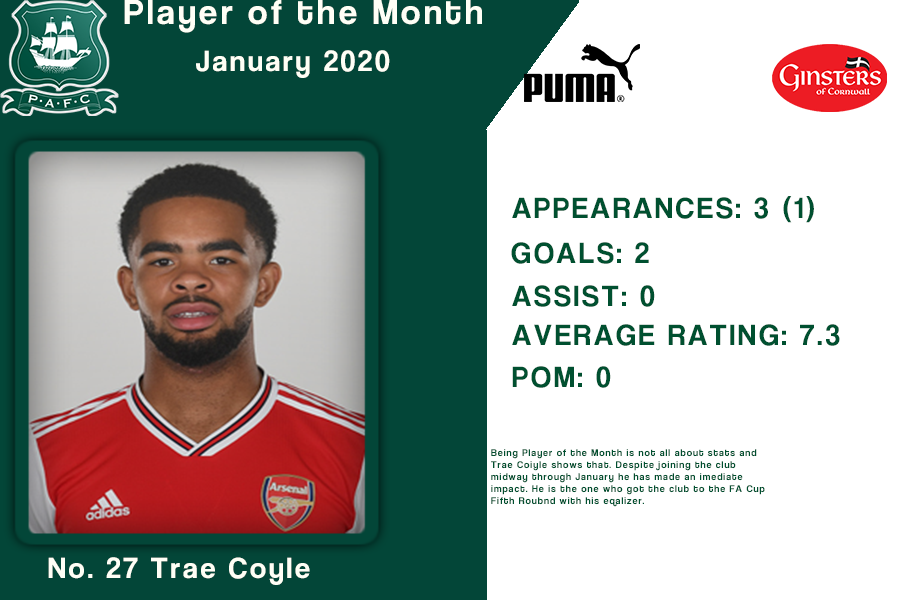 ScottT
3 years
Crawley certainly wanted to get revenge for dumping them out of the cup and succeeded. Despite that, you're still leading the way and that's the most important thing.
Login to Quote

Justice
3 years
The league is tight but you're sitting pretty on top. Further rounds to enjoy in cup competitions too, it's all looking quite rosy at the minute!
Login to Quote