Griffo
2 years
Javier Pastore, what a tale to tell!
Login to Quote

tedbro20
2 years
Some. Ice signings there. Good luck for the season ahead
1
Login to Quote

Eoin97
2 years
Javier Pastore. What. A. Signing! Looks good all around for a strong Serie B finish this time round!
1
Login to Quote

ScottT
2 years
Ready to roll I think!
1
Login to Quote

So as you know we are back in Serie B, but this time I had built a lot stronger squad and had learnt from my previous mistakes last time around. Just a month into the new season, and the board rewarded my hard work. They can see I am doing everything I can to bring glory back to Palermo, and I was rewarded with a new 3 year contract! The adventure continues! 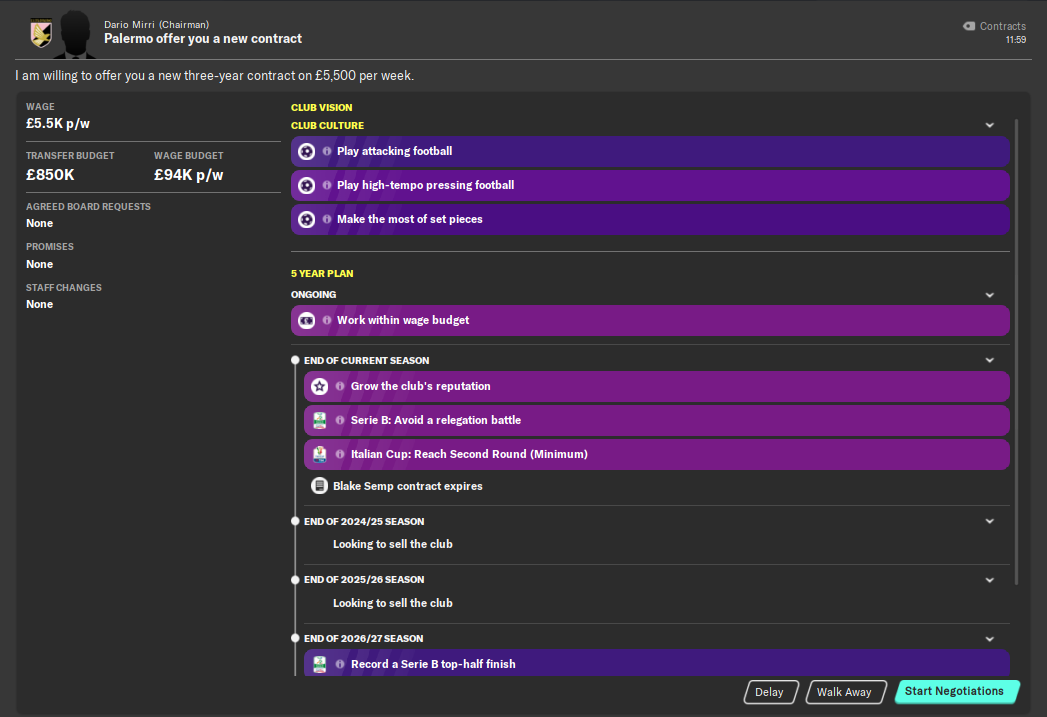 A look at our youth intake preview, it does not look all the promising, but I am always hopeful and excited to see who we get. We are yet to get any decent players really other then Balastro, who has found himself on the bench a lot this season, and D'Emanuele, a promising young defender who unfortunately right now is our 5th choice centre back. 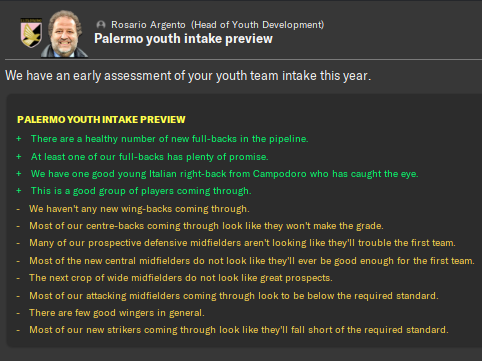 We are halfway through the season and we have had some mixed results... We went on a couple of winning streaks, and I would have preferred to turn one or two of those losses into wins... wait until you see the table and you will see why. 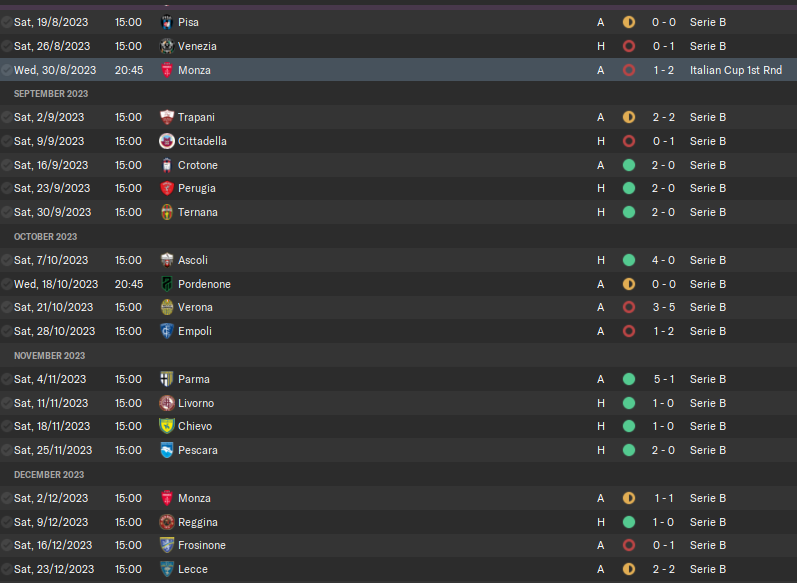 As things stand at the end of December, we sit in 4th place in the league. The top 3 teams get promoted to Serie A, and look at how close it is! All the way down to about 13th place, every team from 1st to 13th is challenging for the top 3. It is a crazy battle and every game counts! 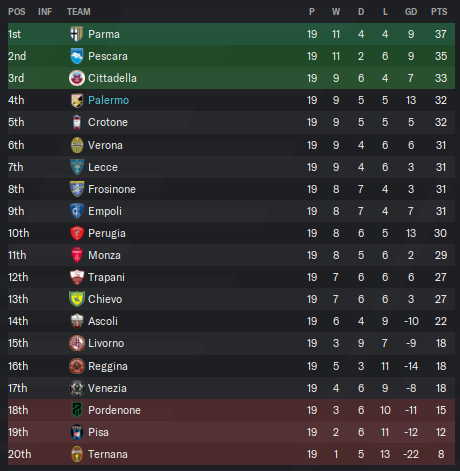 We have had two standout performers in this first half of the season. Colombo has been banging in the goals, he is second top goalscorer in the league, 13 goals in 17 apps isn't bad at all. 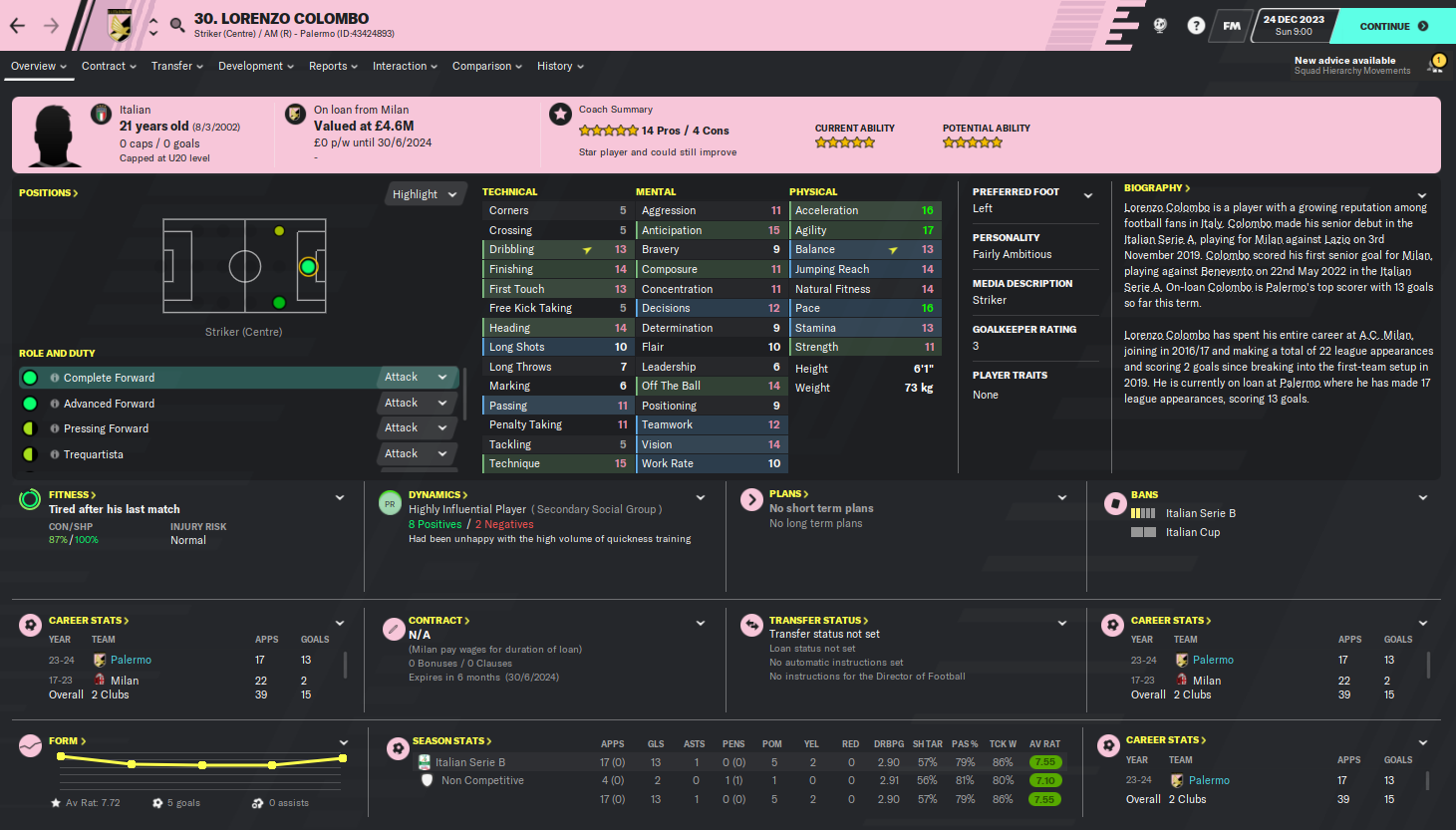 Our other key performer is Colombo's strike partner Gutierrez, the more unselfish team player has scored 6 and assisted 7 in 15 apps. These two up front together have been quality and I am hoping they can continue their form for the remainder of the season as I am sure this promotion battle is going to go right to the end. 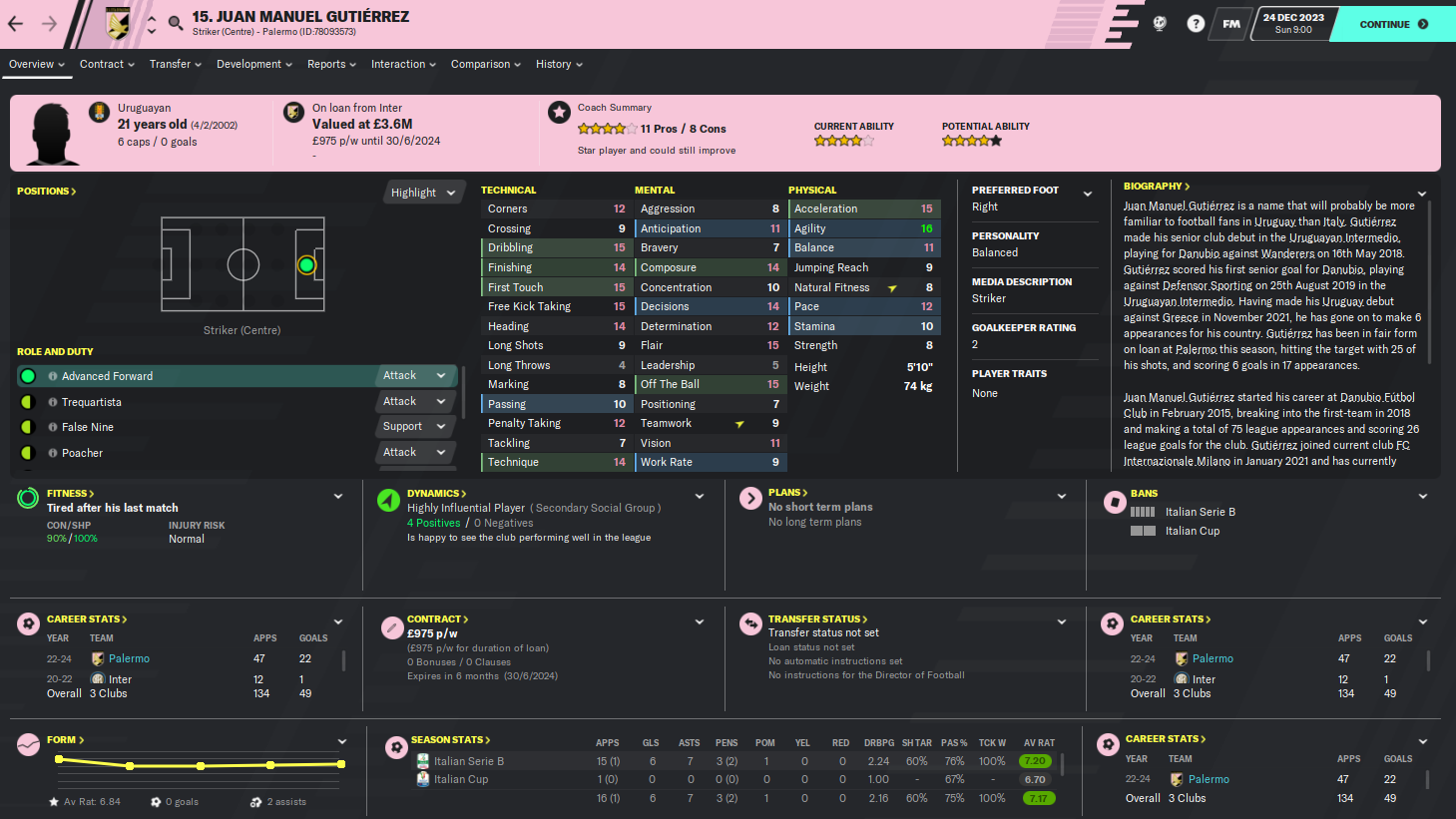 Unfortunately Pastore hasn't really stood out so far. Likely because he doesn't fit our formation, he would be a quality CAM but we don't play a CAM.

Donsah though as a DM, wow, he has been quality! He scored the best goal of our season so far, how about this for a strike!

Thanks to everyone who is following my story! The feedback has been great, and I love reading your comments !
Login to Quote

Griffo
2 years
Very very very good start to the season here, get on up there into the top div!
1
Login to Quote

tedbro20
2 years
Hopefully have a nice strong finish to the season. Wont be the worst to spend another season in the league to get ready for making a push and then staying up
1
Login to Quote

ScottT
2 years
The home and away form are complete parallels. If you can improve the away form, you'll be in a fantastic position - although that isn't to say you aren't already!
1
Login to Quote

FMBlake
2 years • Edited
Griffo - Thanks mate! Hope we can carry on second half of the season and get promoted!
Justice - Amen!
Tedbro22- I agree would be good to build again, but I am so excited for Serie A also, it feels so so close. Will be a massive challenge though once we get there.
Eoin97 - We are coming back bro!
ScottT - I agree man has been tough away from home, although my best result this season was away! We smashed Parma who are dominating the league.
1
Login to Quote

Griffo
2 years
I feel your response gave me a spoiler

Will have to wait and see aye

FMBlake
2 years
SEASON 5 | COULD THIS BE THE YEAR WE GET PROMOTED TO SERIE A?

In the January transfer window I didn't have too much money to spend, but was also beginning to plan for our potential promotion after a decent first half of the season.

I signed Maldini on loan again from AC Milan for 2 seasons, this will give me the opportunity to play wingers next season. 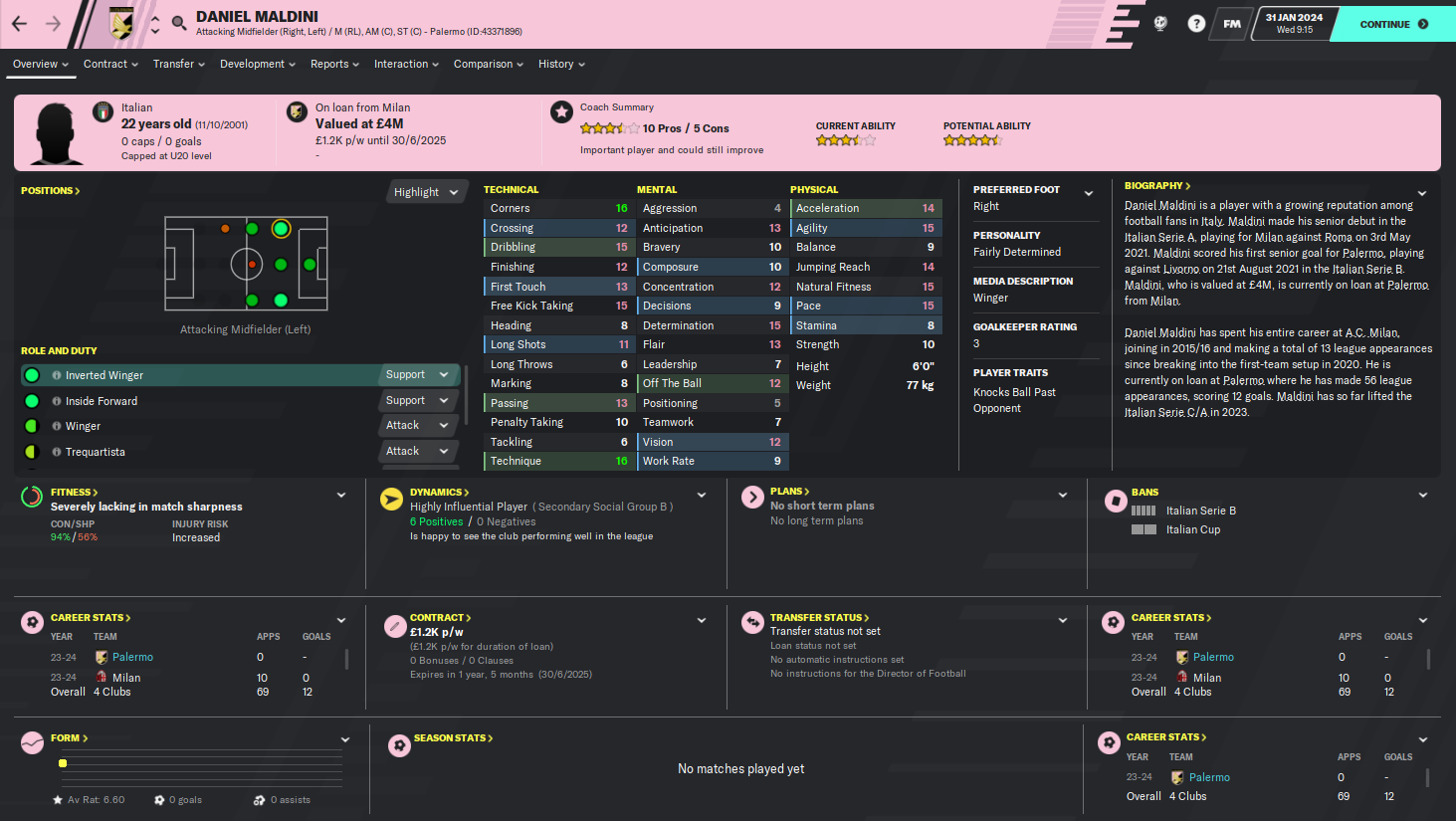 I also signed a couple of players on pre-contract's but they will come at the beginning of next season, so I will wait until then to show you who I got.

A bid came in for Lancini that was too good to turn down. He was aging and I have a lot of center back's already in the squad. So off he went.

Continuing on with our season, we were fighting for promotion in a tight battle with about 9 teams that could all be within reach of Serie A.

We got an important 1-0 win over Leece that pushed us up to 2nd in the league. Pastore who was average all season, scored from the penalty spot. 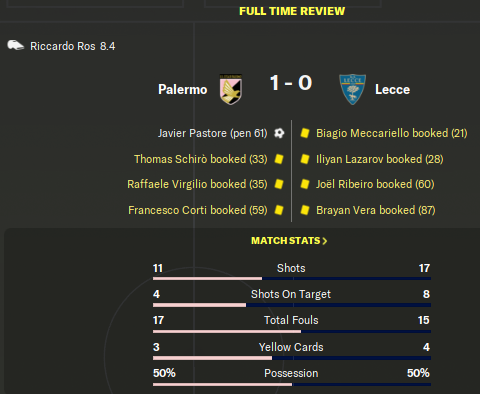 We then went on to lose our first game after 11 games unbeaten..I felt like we deserved more and were unlucky not to win. 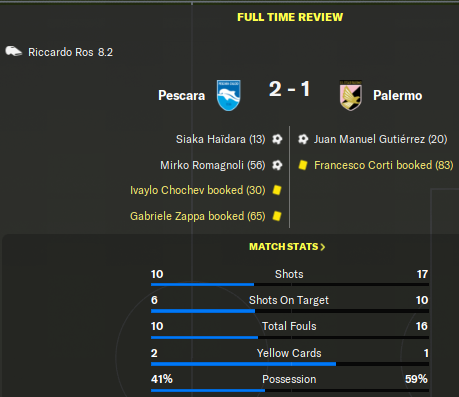 We had been on a great run, would this loss cost in the long run? 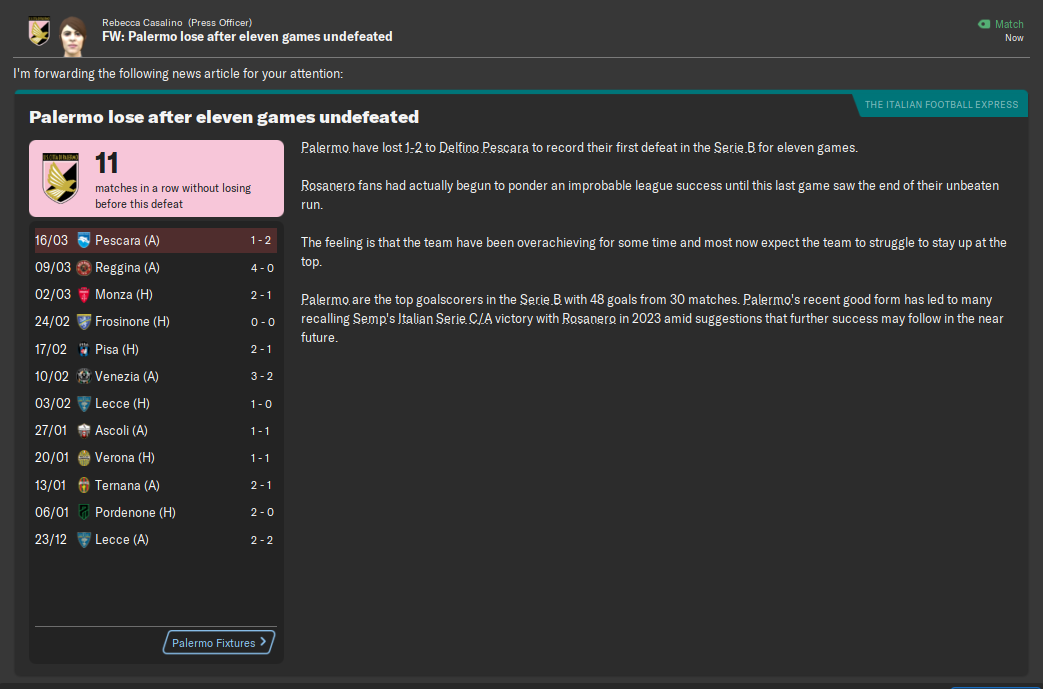 8 games left in the league, our next game was against Parma. 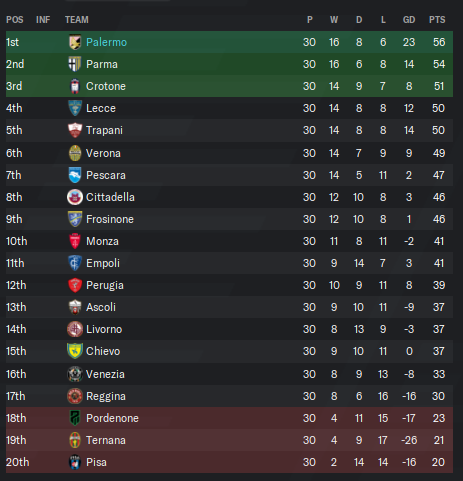 We got our annual Youth Intake, and we have two promising full backs coming through! I am hoping they can develop into their potential. 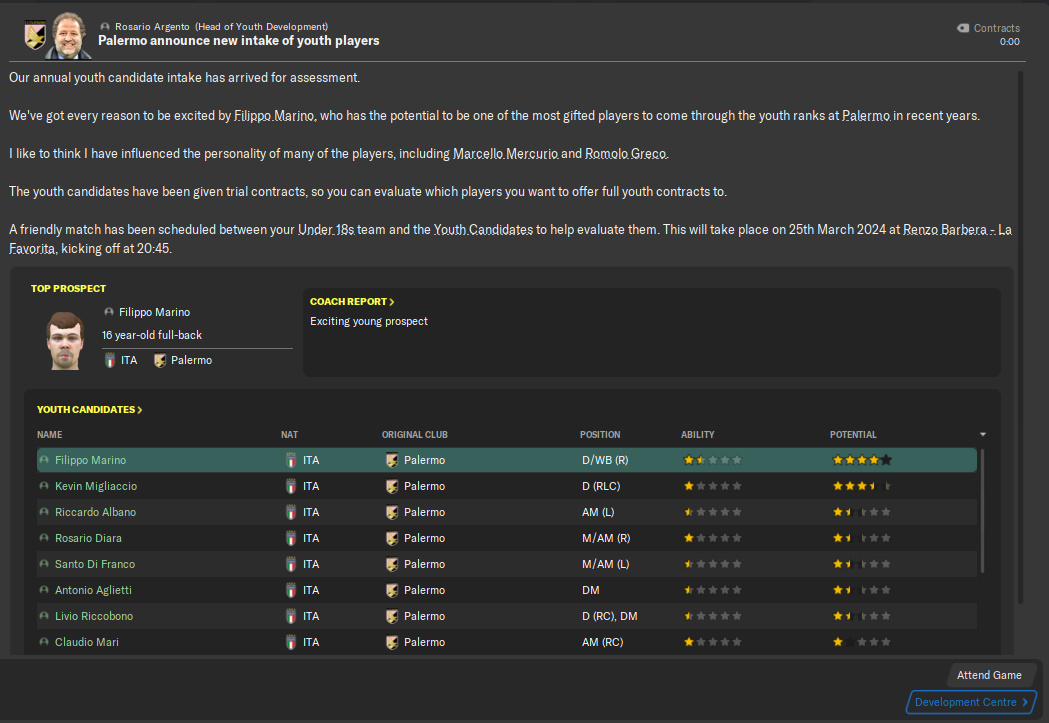 We managed to beat Parma 4-1! We didn't play the best, but we took our chances! 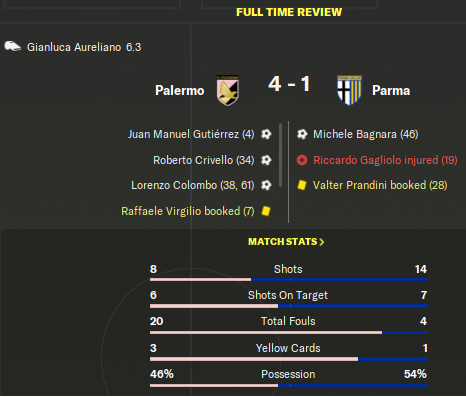 5 games left in the league, and it is so close! There are 9 teams all fighting for the top 3 spots, and potential promotion to Serie A

We gained promotion to Serie A!!!

Can we win the Serie B? Last game of the season... 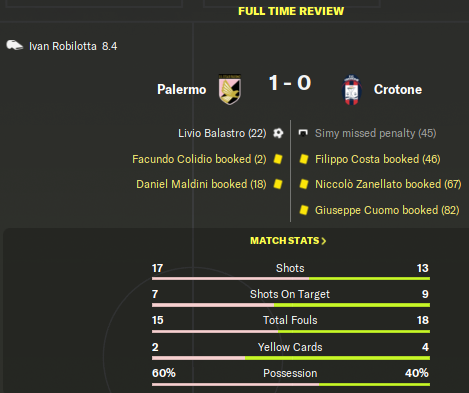 And we won the league! What a season! We have done it. We have brought Palermo back from the dead and back into the league were they belong, we will be playing in Serie A next season! 5 years of ups and down's have paid off.. now we need to rebuild our team so we can compete and push on next season!

The board have given us a good budget to work with next season, and we will be looking to make some important signings to strengthen the squad.

Colombo, our loan striker from AC Milan won Player of the Year. He was certainly our best player, and was crucial for us during our promotion fight. 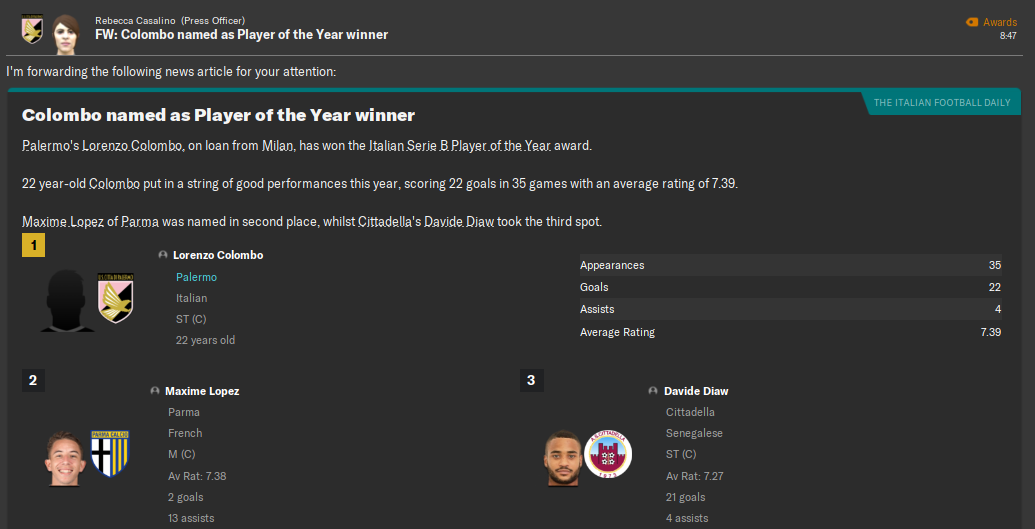 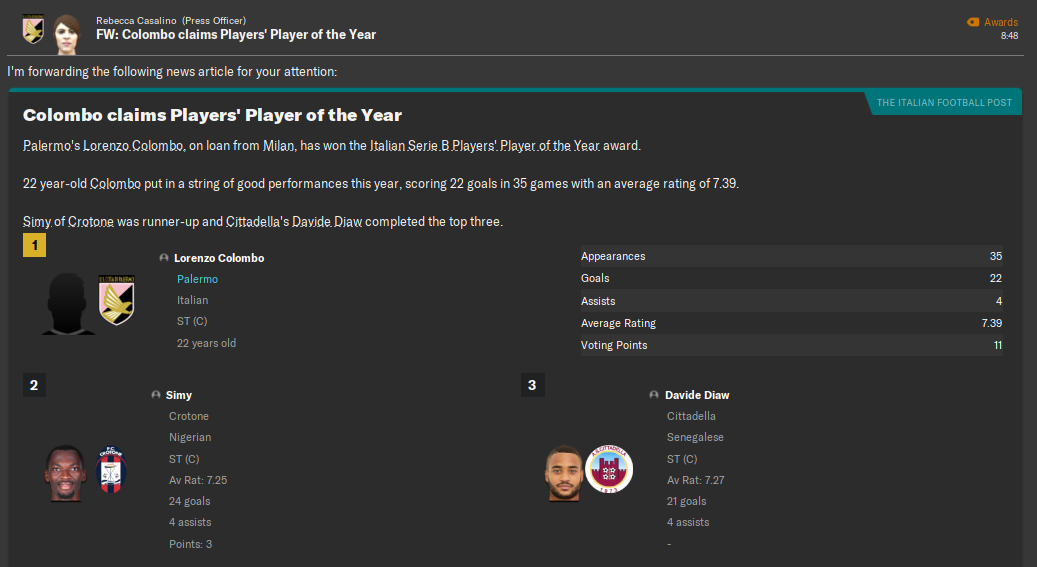 I was awarded the Manager of the Year Award 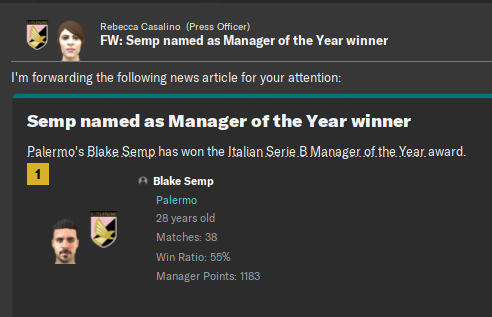 We had 6 Palermo players feature in the Team of the Year! 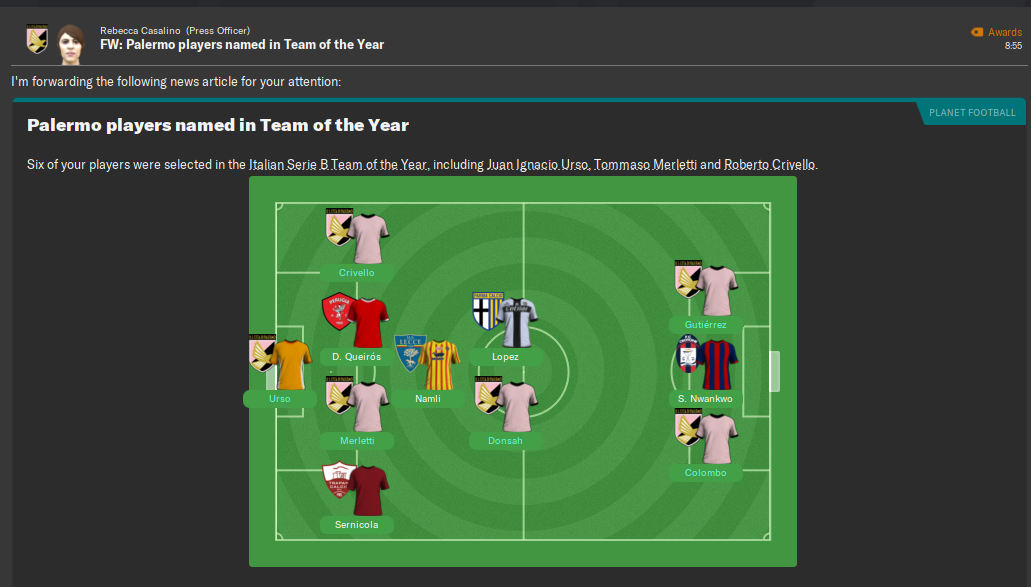 A closer look at our results in the second half of the season, near the end of the season we started to lose a few games, and I honestly thought I was going to bottle it... 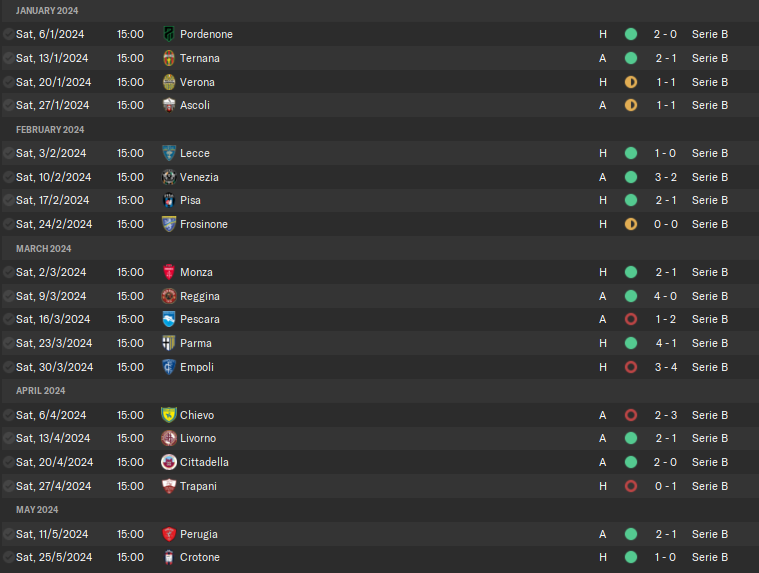 The final Serie B league table, what a year! Such a close league!

Lorenzo Colombo
This man was superb this season. He was our top goalscorer with 22 goals in 35 apps. I will do everything I can to get him back at the club to play again for us in Serie A next season. 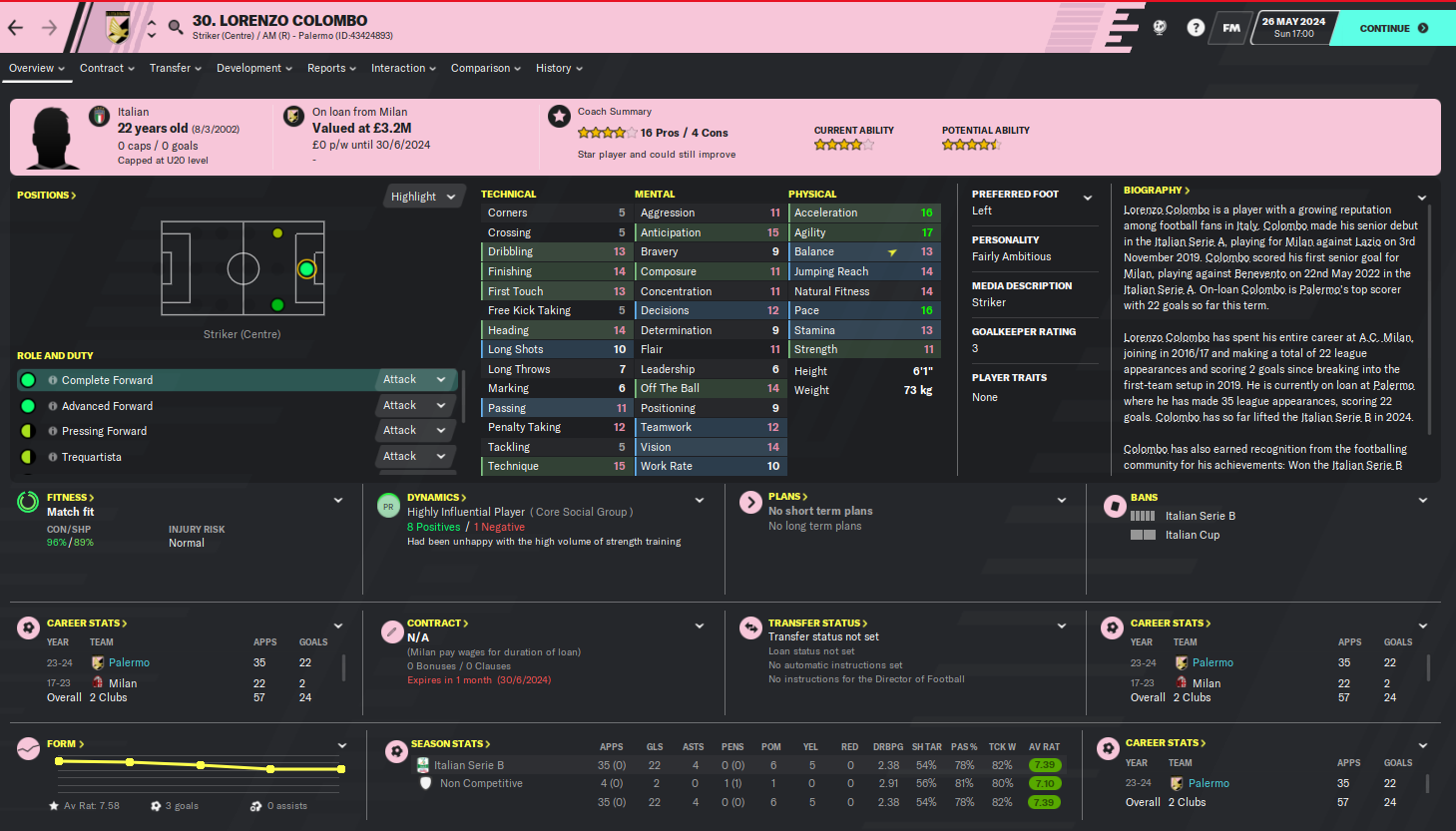 Godfred 'Godsent' Donsah
What a signing this man was for us! We got him on a free, and he has been class. Not the most goals and assists but some crucial performances and important goals! He will be an important player for us for many years I hope. 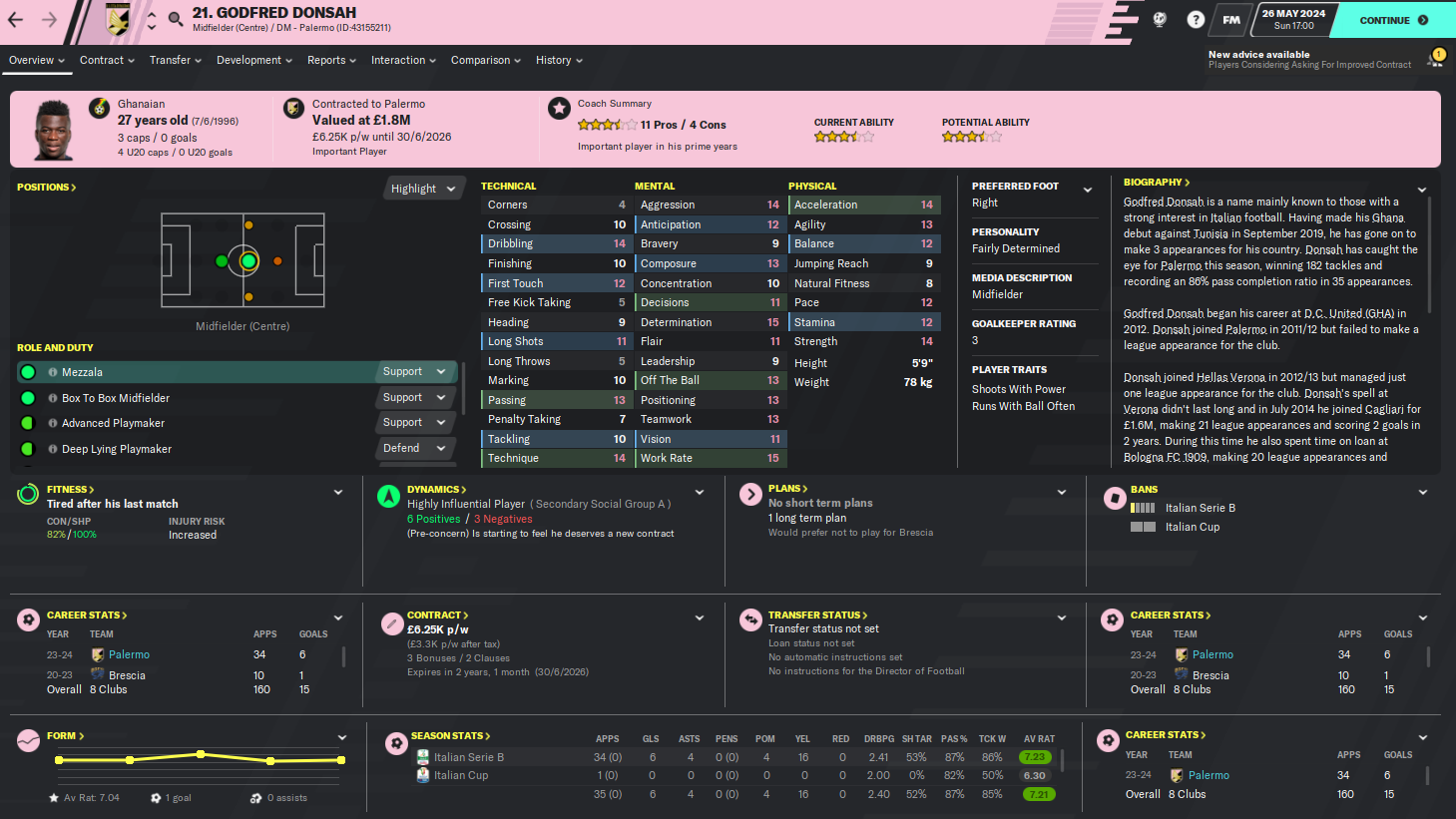 Roberto Crivello
The 32 year old left-back was really our only option in his position this season, and certainly an area I need to improve next season. Although Crivello was very good for us this season in Serie B. 8 assists and 4 goals, not bad at all from a left wing back. 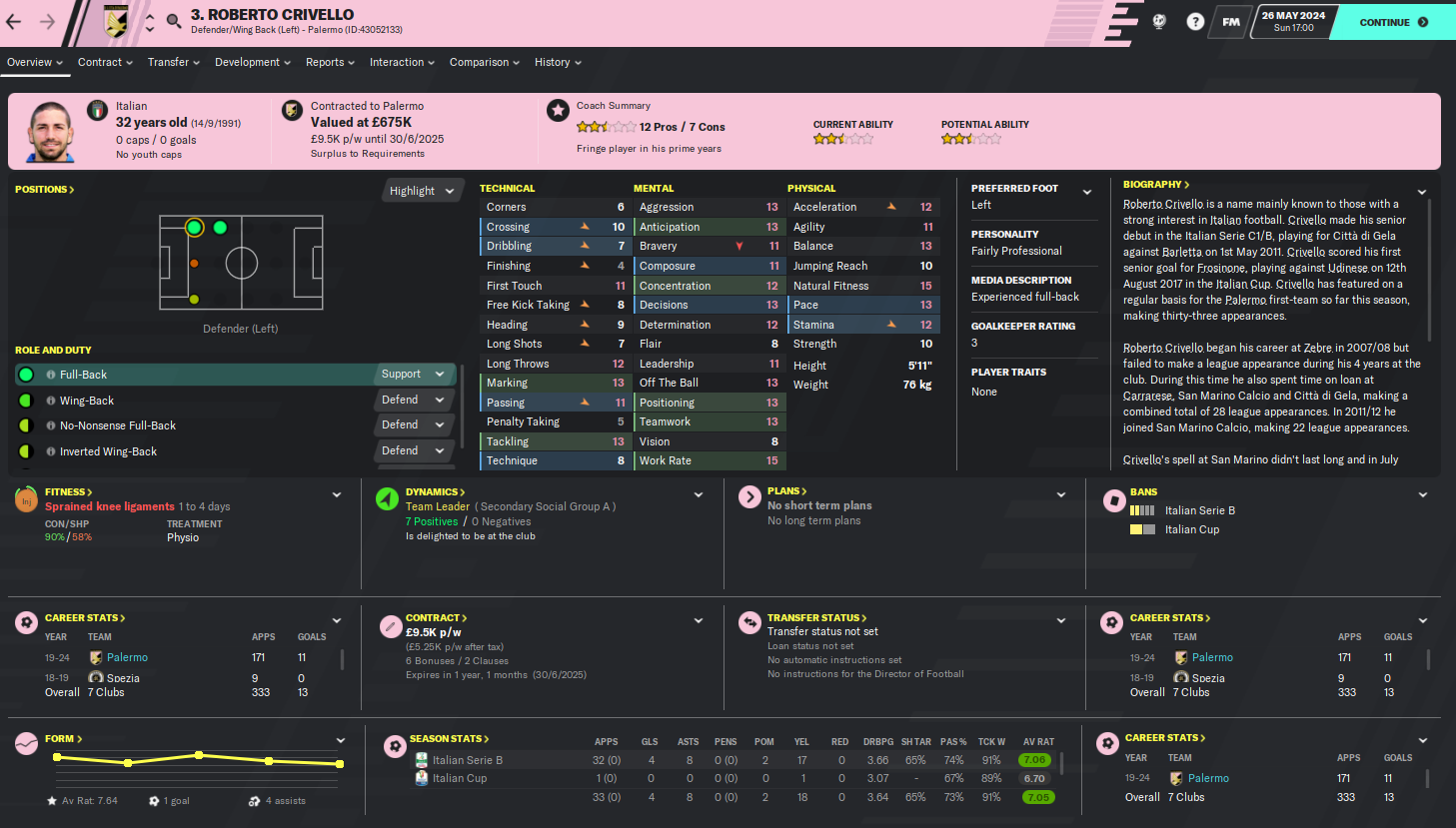 Juan Ignacio Urso
This guy was a beast! He won Serie B Goalkeeper of the Year, he kept 16 clean sheets in 38 appearances, only conceding 36 goals. I went onto his contract to try and loan him again next season, and I was shocked to see his contract was expiring....so I might be able to sign him permanently on a free! 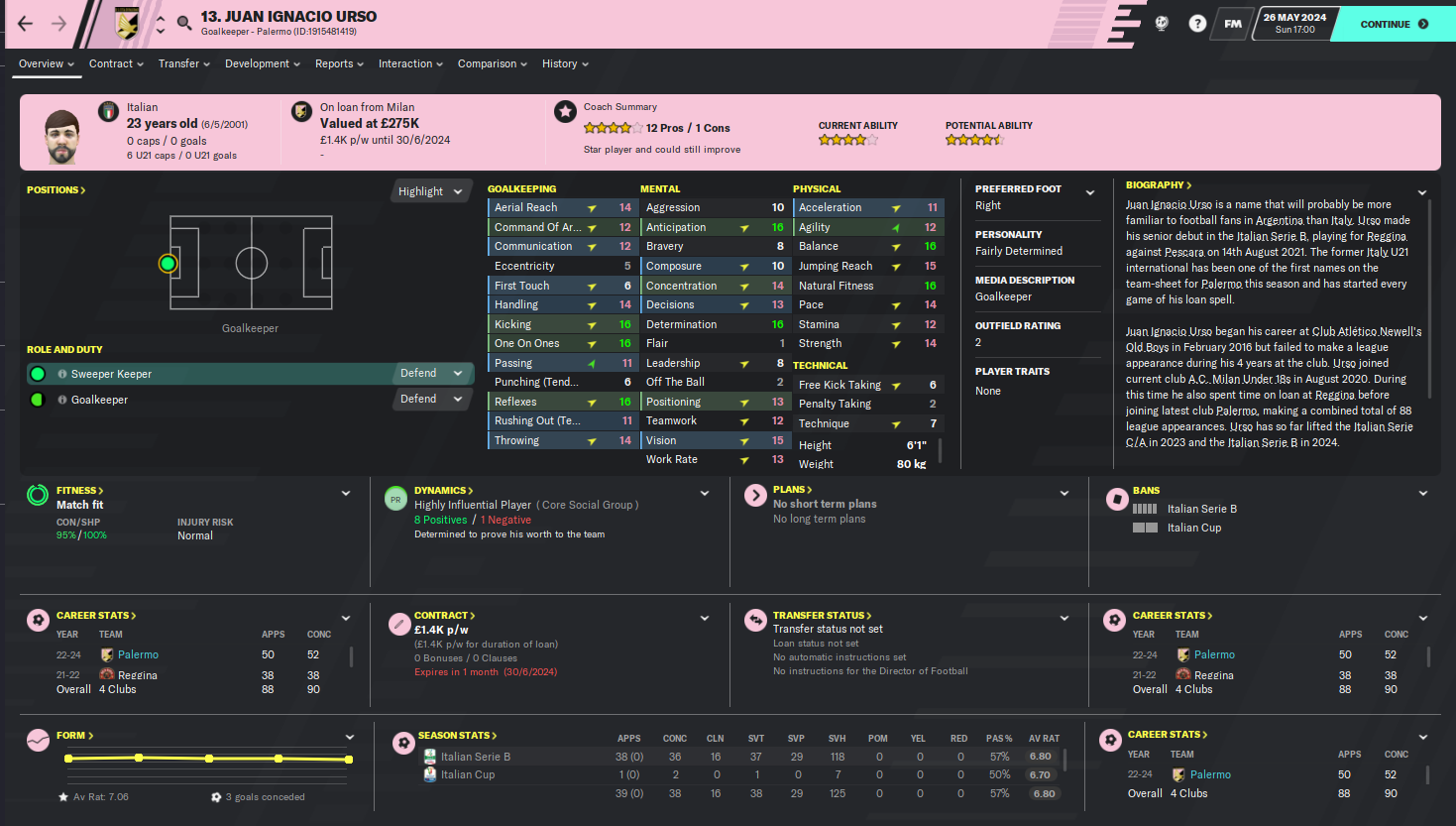 So we have done it! Serie A next season! I am so excited, but it is going to be a huge challenge!
I have big decisions to make in terms of who to sign, how to approach the league, what tactics to use. But it is exciting time's for Palermo, and I am proud to have brought them back to where they belong.

Eoin97
2 years
Congrats. Will you intersting to see how you fair in one of the biggest leagues on Earth in the Serie A. The quality jump will be monumental. Best of luck