Eoin97
2 years
A very busy summer transfer window, and it needed to be. But you have greatly strengthened the squad and you look good to go for a mid table finish at the very least this season. Hopefully you won't have to worry about relegation anymore, as the squad has been revived. Great work!
1
Login to Quote

Jack
2 years
Some great looking additions there and the media favour your chances of keeping afloat another year. Good luck mate.
1
Login to Quote

tedbro20
2 years
Some great signings there and hopefully can integrate well with the squad. Kingsley looks great even if you sell him at the end of the season to fund a spending spree
1
Login to Quote

FMBlake
2 years
Eoin97 - Thanks mate! I think the squad looks good too, aiming for a top 10 finish!
Jack - Thanks man!
Tebro20 - For sure, Kingsley is worth a lot, if he doesn't perform well this season I will certainly look at cashing in on him
1

We are back in Serie A for another season. But the expectations are higher than ever. Not expectations from the board, but personal expectations. I am aiming for a top 10 finish in the league. We have built a squad to achieve far more than a relegation battle. Pre-Season went well and we are ready to go.

Our first game of the season was a fantastic 2-0 win. Pirloa on the score sheet twice with a brace and Gutierrez picked up 2 assists. Our two new free signings made an instant impact. 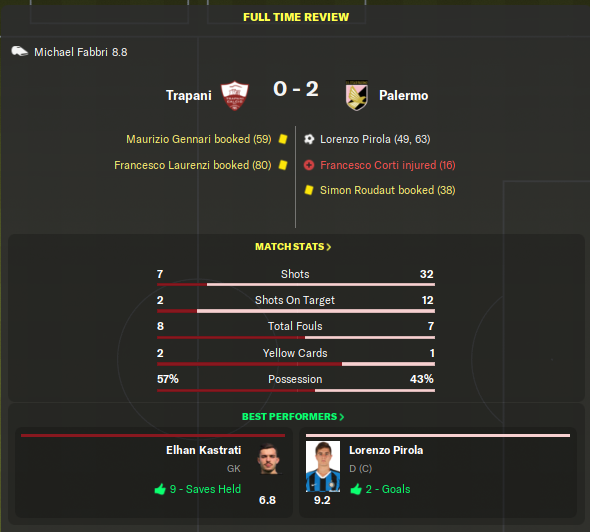 Unfortunately in that game our main RB picked up an injury. Corti has been fairly injury prone for the past couple of seasons..

That means our youth academy talent Marino will be our starting RB until Corti is fit, and potentially for the remainder of the season, if he plays well. He has fantastic potential, and this could be his opportunity to really to develop gaining quality match experience. 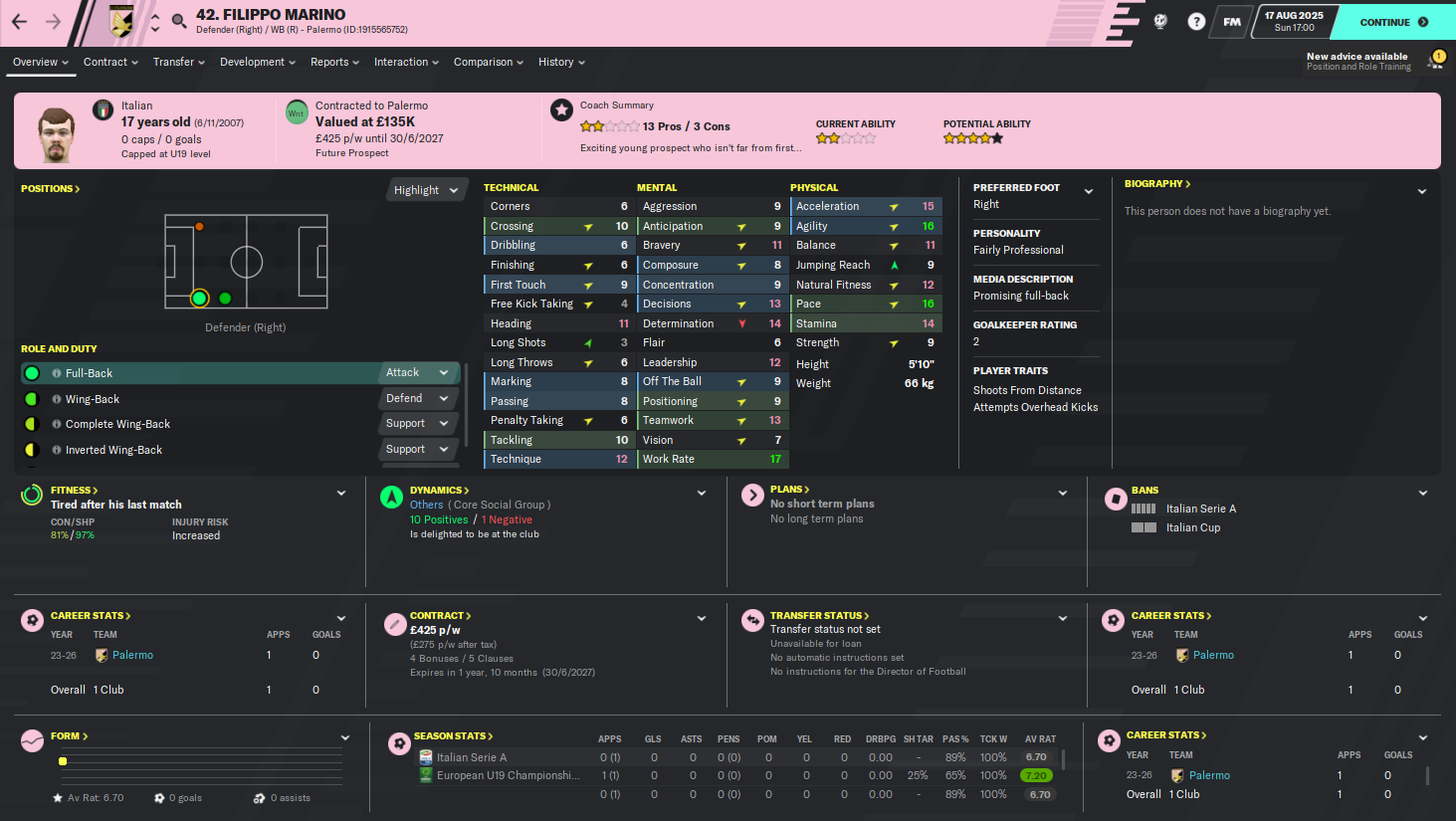 Back to back wins to start the season! Colombo with the goal, a narrow victory over Sampdoria, the perfect start. 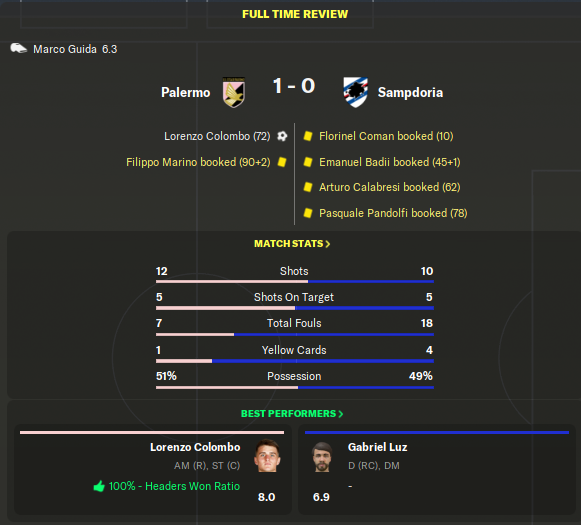 We continued our winning form against Entella, another 1-0 win means we have 9 points from our first three games. Pol Joensen was the goal scorer, our young winger has the much wanted 'wonderkid' status and is developing into a very good player for us. 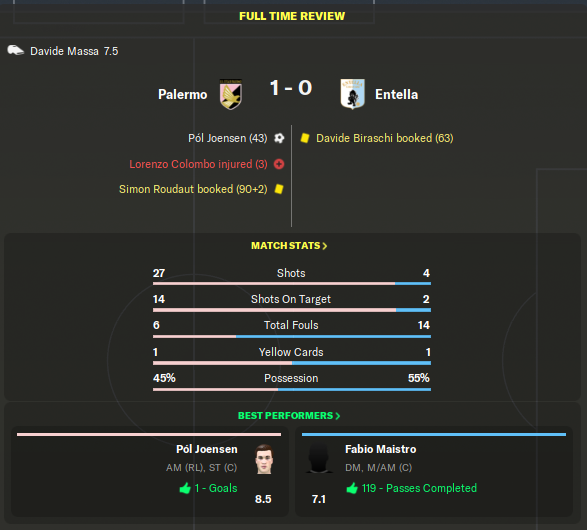 Colombo picked up an injury against Entella putting him out for 3-6 weeks.

Our first loss of the season.. we created a lot of chances and really could have won. 26 shots... we have to score in games like this. 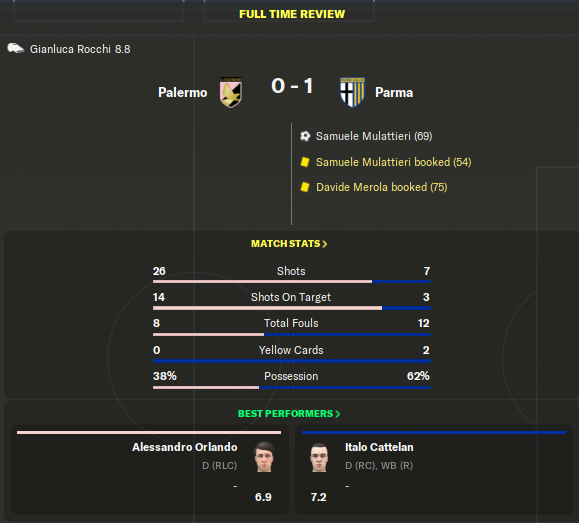 We played Lazio, who have a quality team, they defeated us 3-1. We need to play better against the top teams to raise our status to the next level. 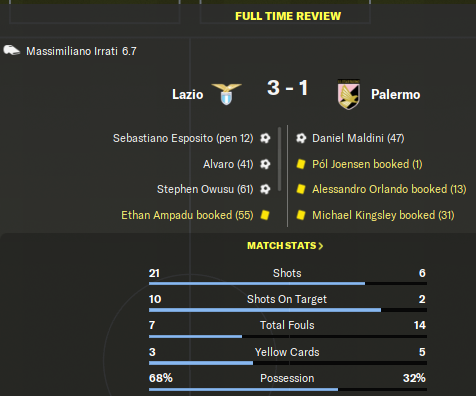 A narrow victory against Hellas Verona. They were bottom of the league, and I was expecting an easier game. 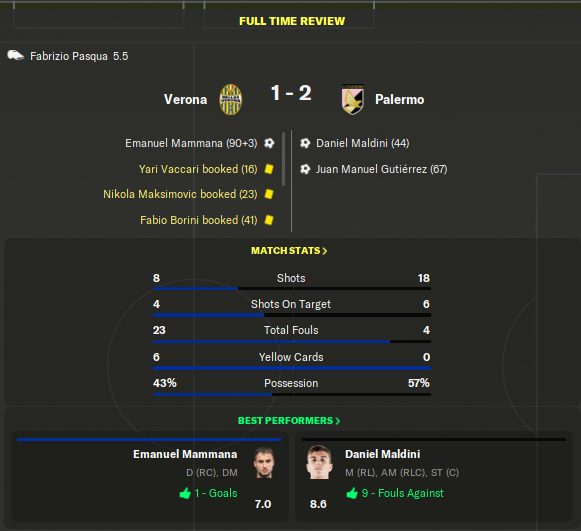 We suffered defeat against Fiorentina in our first cup game. Young Marino was sent off and ultimately cost us the game, as we were 1-0 up and then really struggled after he saw red. I will certainly forgive him though as he is a young player and needs an arm around him to progress and develop. 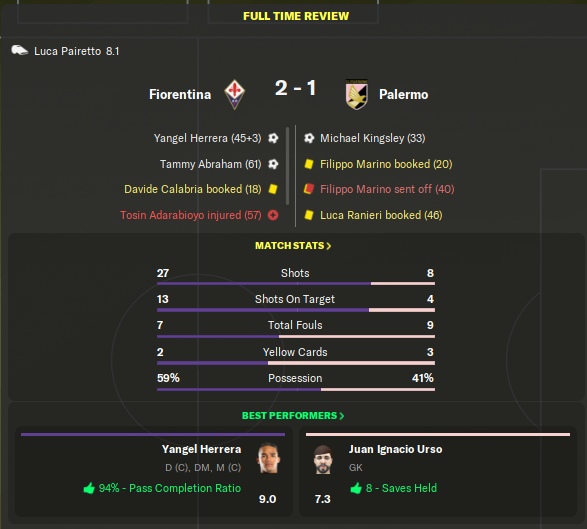 We played Fiorentina in back to back games. This time in the league, and a much better performance. A respectable 1-1 draw, Gutierrez on the score sheet again. He is our leading goal scoring and proving to be a good signing for us so far this season. 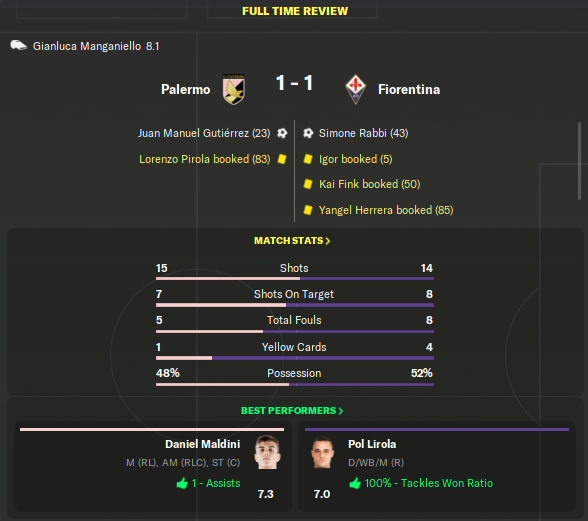 Our next game was at home against Roma, we were quietly confident looking at their team it doesn't look as strong as Roma teams of the past, and we played well against Fiorentina which gave us confidence. 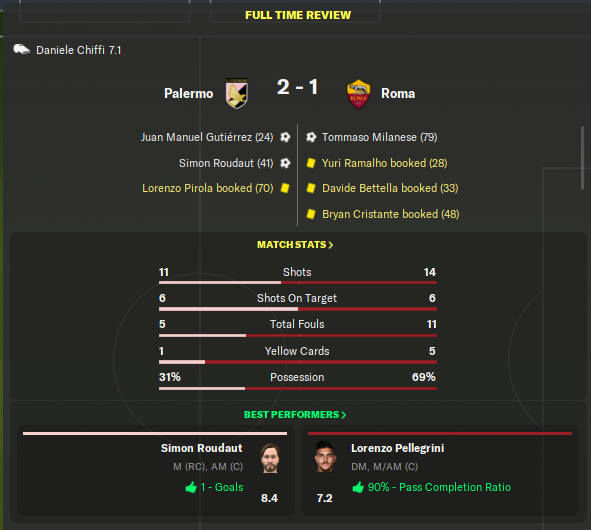 We have a tough schedule coming up. We have to play Inter and AC Milan within 4 days, both games at the San Siro. It will be a huge challenge but we are ready for it after beating Roma.

Inter Milan are top of the league. They have a very strong team and it would be a tough challenge.

We came away with a draw. Joensen scored very early and we were so close to winning all 3 points. Salcedo scored late to break our hearts. But we have to proud of ourselves to compete against the best team in Italy. 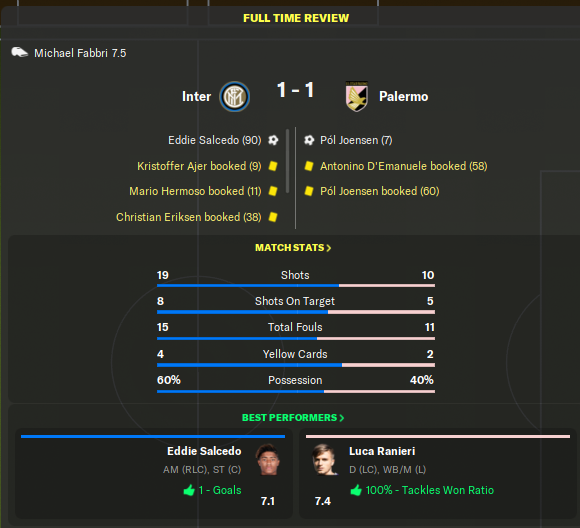 With a quick turn around, we play again in the same stadium. This time against the boys in red and black, AC Milan. They have a very good attack with Asensio, Reiner and Coman. They will be very tough to keep out. 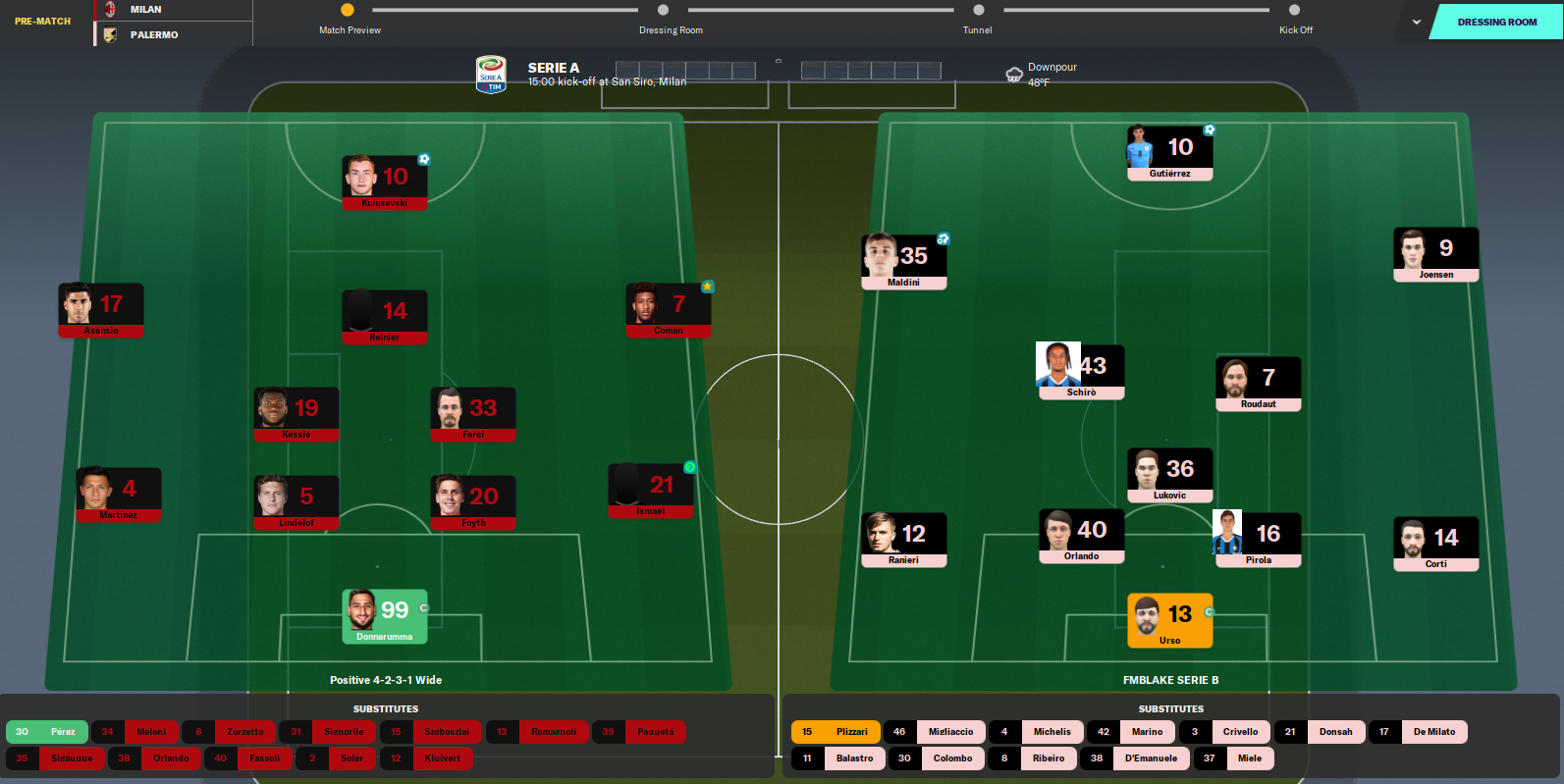 We played well but we couldn't come away with any points. A 3-1 loss, and our young winger Joensen scored again. We will be back stronger. 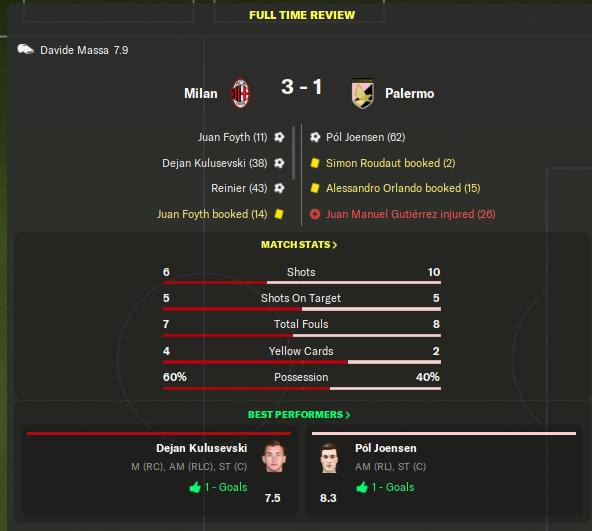 Gutierrez picked up his second injury of the season. Unfortunate as he has arguably been our best player.

We played Sassuolo next. I decided to start both our 18 year old full backs in this game. Sassuolo have a nice team with Jude Bellingham and Gnoto. Their RW, Urso is also one of the top prospects in the league. This will be yet another tough game. 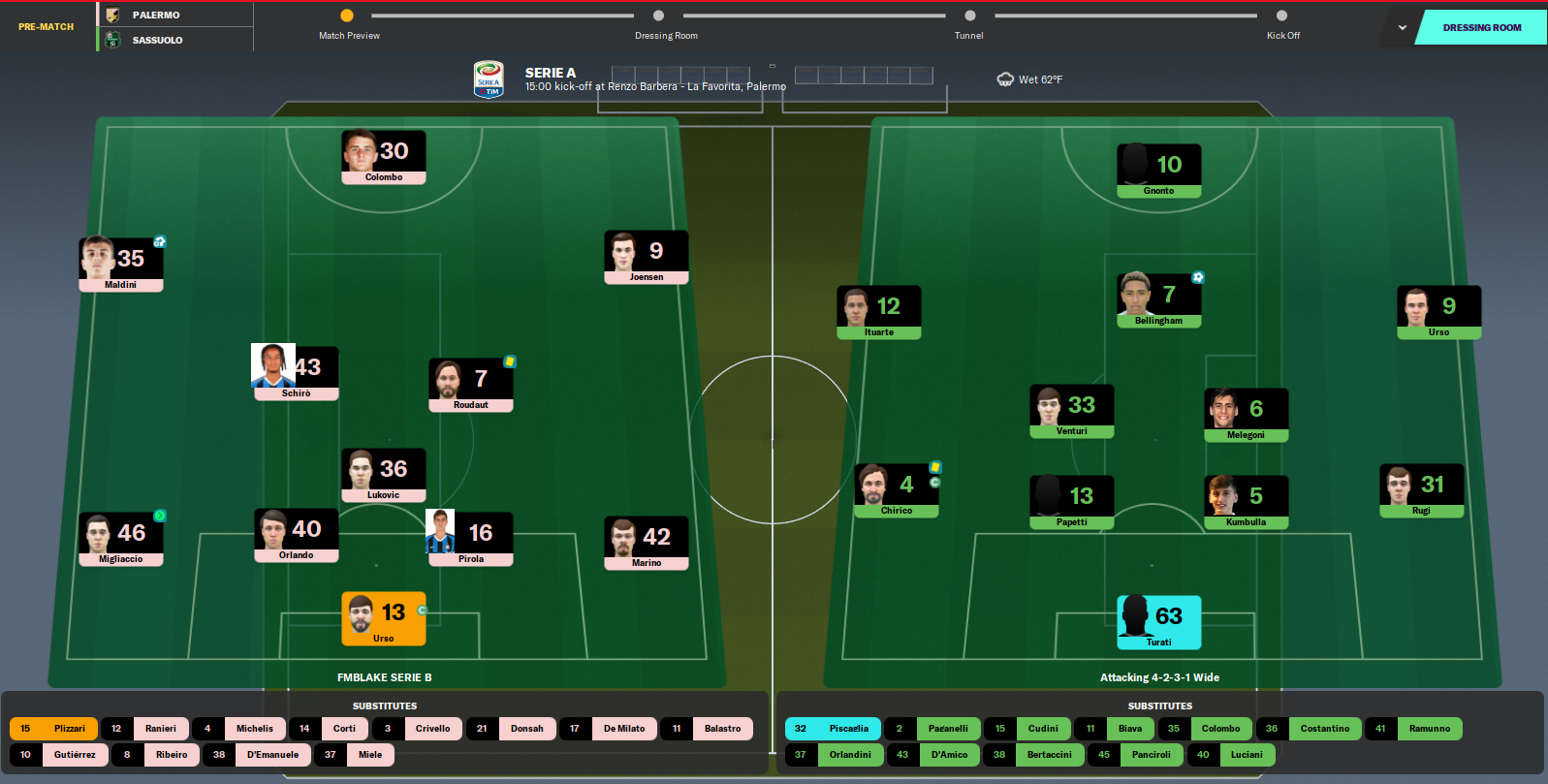 We competed well and come away with a point. A 1-1 draw was probably a fair result in this match. 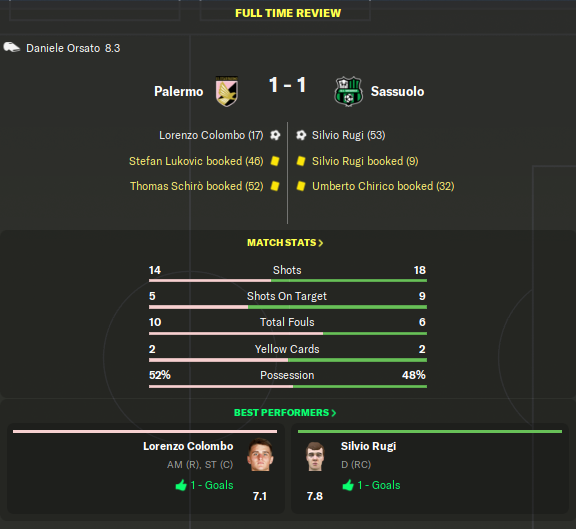 Next there was a 15 day break due to international break. I wanted to keep our players match fit, and maintain high morale, so I scheduled a friendly against a much weaker side.

And we smashed them! Colombo scored 8 goals... surely that will give him some confidence moving forward. 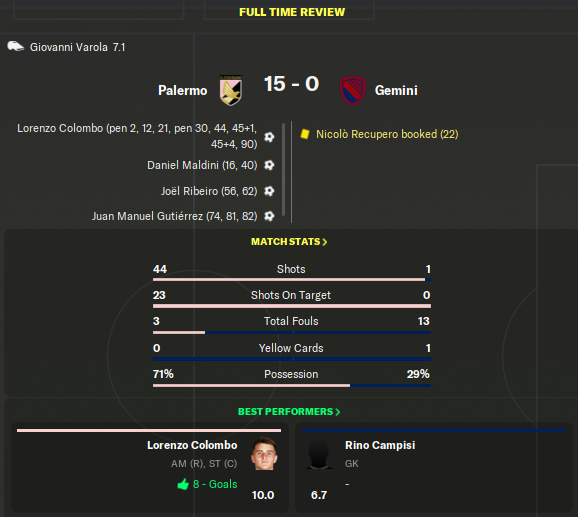 Although, a poor result followed. A 0-0 draw with Brescia, we created a lot of chances and should have scored. We have drawn more games than I would have liked this season. We have been solid at the back but struggled to score, especially when Gutierrez is injured. 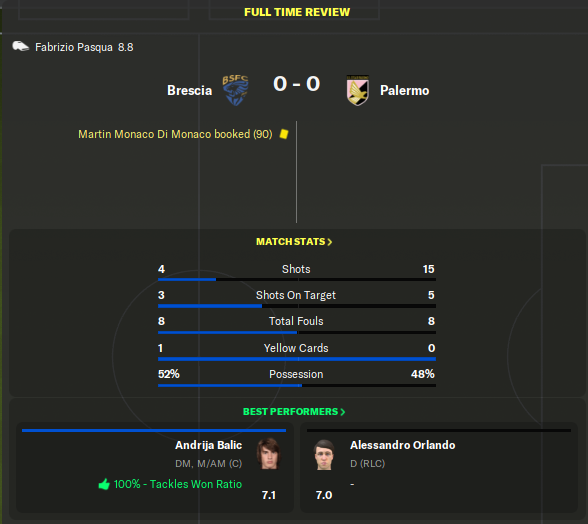 We now play Juventus. Surprisingly they are 1 point below us in the league! I don't know how, but they are really struggling this season. Their front 3 is class! Vinicius Jr, Lukaku and Mane, imagine if we had that front 3!

We don't need those players when we have Gutierrez! A hat-trick for our Uruguayan bagsman. A 4-1 victory, one of my favourite results so far in this save. We really have come a long way to beat the like's of Roma, Napoli and Juventus in the past two seasons. 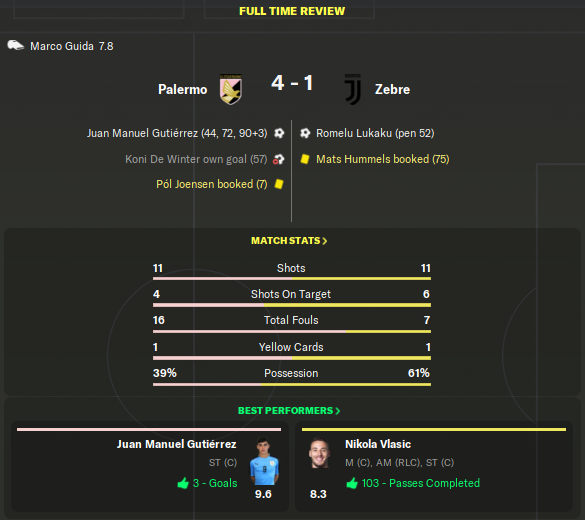 After beating Juventus, we had another good win. 1-0 over Udinese, and that man Joensen scored again. 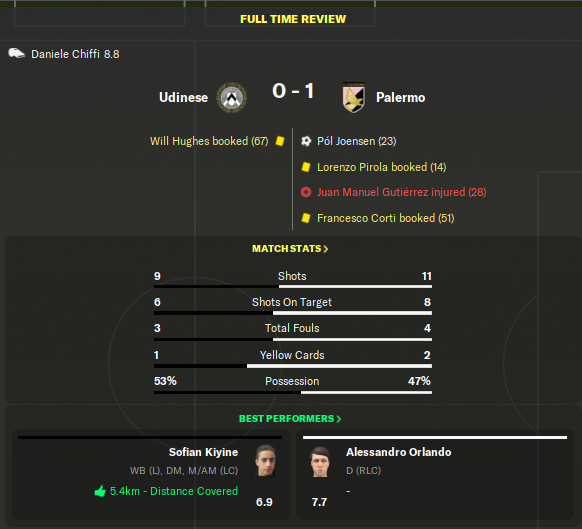 But I can't beleive it... Gutierrez picked up another injury!

Our youth intake this year looks like one of our worst for far ... 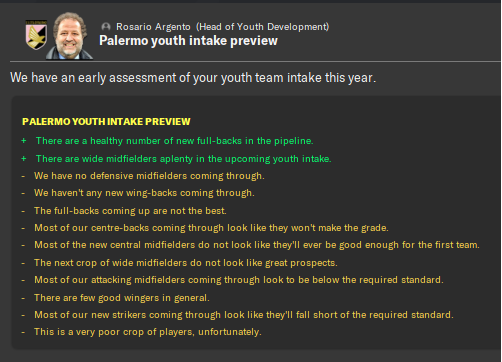 Our results in the first half of the season have been good, but I am eager to turn more of our draws into wins. The highlight so far has to be the win over Juventus. 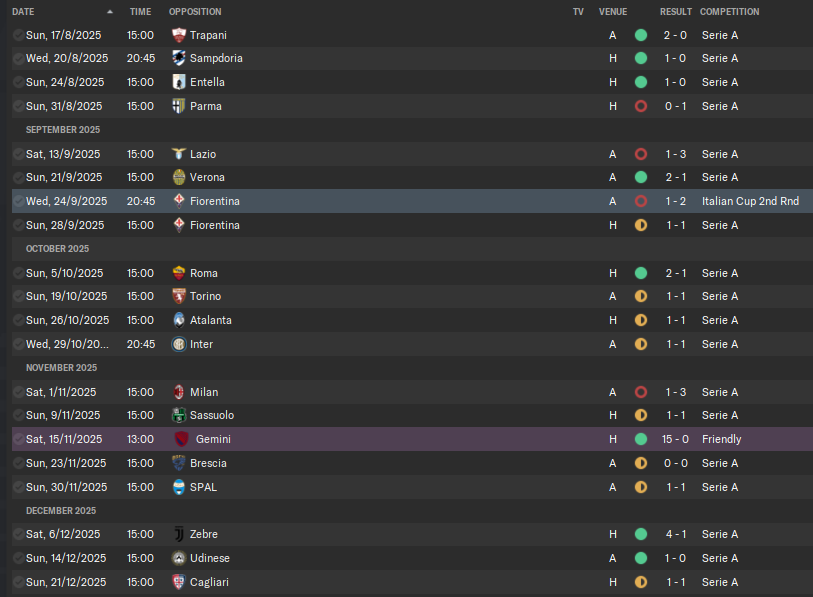 We currently sit in 8th place. A very respectable position to be in! I am very impressed with most of our new players as well. We still have money to spend so will look to see if we can bring anyone in the January transfer window to make us even stronger. 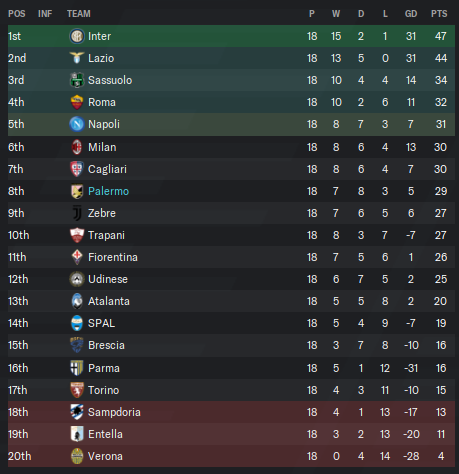 And to cap things off, just before the new year, the board offered me a 2 year extension on my contract. The Palermo dream is gaining momentum and the board have noticed our success.

We are doing well, and we are not far off a European spot at all! I am thinking about selling a couple of player's and cashing in on a world class striker... if I can find one. We have a lot of midfielders so I am considering selling Kingsley or Goudijm... that would give us money to spend. I have to find the right player for our team though.

Our young players have done well so far this season. Gutierrez has certainly been our best player. But Joensen, Maldini and Pirola have also been stand outs.

We seem to have stamped out the poor discipline issue we had last season. Only one red card so far this season. Much better to see.
Exciting times, can we push even further during the second half of the season and qualify for Europe!?

tedbro20
2 years
Some excellent results there especially the one against Juve. Can a push for a European spot be on the cards if the form can be continued
1
Login to Quote

Griffo
2 years
Leading the league in draws, is it a conservative approach to secure your place in the league or just sheer luck of the ... wait for it ... draw?
1
Login to Quote

ScottT
2 years
What a win against Juventus, sorry Zebre. If only Gutierrez would stop getting injured...
1
Login to Quote

TheLFCFan
2 years
A great season so far with a much more disciplined side. Gutierrez, when fit, seems to be providing the goods and the team are certainly looking good for that top 10 you wanted at the start of the season. The one worry I have with this squad would be the reliance on loan players, hopefully some of those can be bought in on permanent deals in the future.
1
Login to Quote

Jack
2 years
A fantastic season so far, especially that Juve result! Despite what people thought based on last season, to be where you are at the halfway point of the season is tremendous, a real opportunity to push yourself as far as possible!
1
Login to Quote

Eoin97
2 years
Damn man, you are really rising this Palermo side to another level. Maybe a world class striker would be the difference between challenging for a European place and finishing mid table...
1
Login to Quote

FMBlake
2 years
Thanks for all the comments guys! Love reading your feedback

Tedbro20 - I am hoping we can push for a European spot for sure!

Griffo - Yeah the draws have been frustrating, I think I am going to employ a more attacking approach for the second half of the season, rather than balanced.

The LFCFan - You are so right mate, we are very reliant on loans, but it is working, and I can't really afford many players worth buying, so I will probably continue to loan players in, until the right players become available for permanent signings.

Jack - Thanks for the support mate, we are doing really well and will keep pushing to finish as high as we can.

Eoin97 - Cheers bro! I am looking for a top top striker for sure, just don't know if that player I want is available.
1
Login to Quote

Justice
2 years
I’d be quite happy with that. Top two seems to be in a league of their own but you have an outside chance of 3rd or 4th, definitely.
1
Login to Quote

Lankyman22
2 years
I love the thread!

Also the name Martin Monaco Di Monaco is one of the best names ... hoping you can find that top striker who can bang in the goals for you
Login to Quote

FMBlake
2 years
Justice - Yeah Lazio & Inter are a class above! We will push for a higher finish for sure.

Lankyman22 - Cheers mate, glad you are enjoying it. Yeah it's a class name aye! I have a striker... will see in my next update later tonight who I signed