Congratulations on the title, very dominant win to finish, good to see the team step up when it mattered most
Login to Quote

Mauve
2 years • Edited
So first off, when I changed the league system of Belgium from 16 to 18 and a Play-Off with 4 instead 6. The places for European competitions were given at the end of the regular season, so we ended 2nd so we don't get the CL-group ticket, weird that it doesn't wait till the end of the Play-Offs to give the tickets. We will need to anticipate on that for the next season. I wonder who we will draw.

Verschaeren extends till 2025
Mixed feelings with this extension but I didn't have a choice, he told me has was going to ask for a transfer. I wanted more for the clausule but 37 was the max after numerous tries.

Also my talent (newgen) from Andorra made his national debut against San-Marino with a 1-1 draw(Seems to be a game that I don't want to miss lol, hopefully he will be the best Andorran football player they have. Belgium in EC2020
At the moment I'm watching the EURO 2020, scouting some potential signings whenever i get back out this financial mess. Belgium had a great result against our neighbours in the north, The Netherlands. This is game is known in dutch as the "Derby Der Lage Landen". 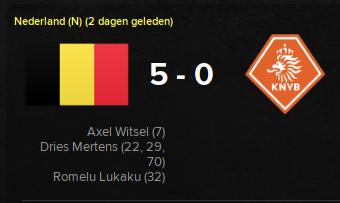 PS: If people want to see League tables of other European (or others), let me know in the comment, I didn't put them here cause I don't know if a lot of people would be interested.

Season 2020/21
Like I've said is the Champion Play-Off (of Belgium) that I've added not giving the European tickets, in other words I've became 2nd in the regular season and Racing Genk did become 1st. So as the champion of Belgium goes straightly to the Champions-League Groups. So because of that fault I need to do Qualifications for the Champions League (financial disaster if I don't get it to the groups)
3th round Q Champions League 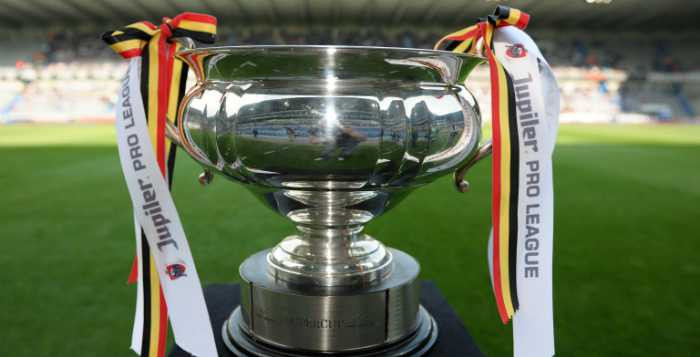 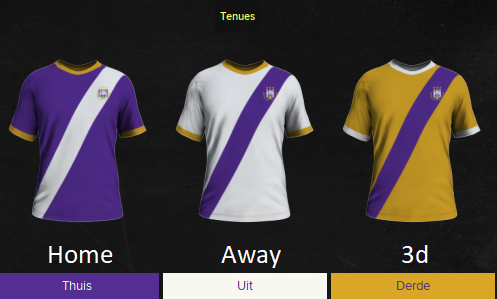 Derrick Luckassen (already a year here)
- First signing of the season is Derrick Luckassen who comes over from PSV Eindhoven, Derrick was already playing for Anderlecht since 1/7/2019 he came on loan with a 4,9m release clausule, it was too good to let slide. 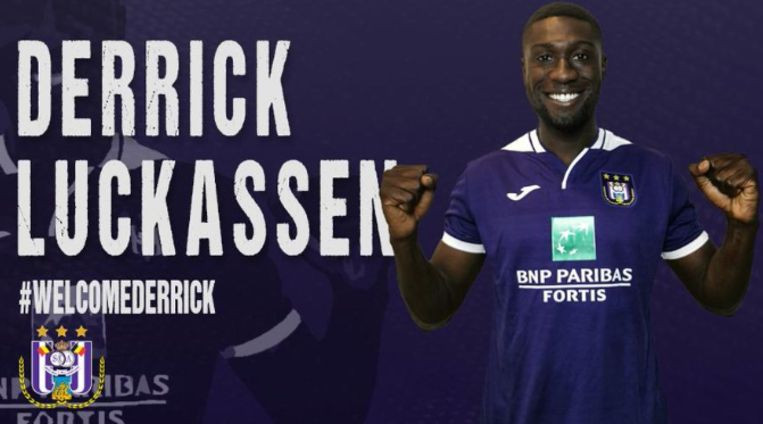 Dieumerci Mbokani (free agent)
- Second signing of the season is a free agent, Dieumerci Mbokani comes after his 2yr-contract with Antwerp finished and he didn't want to extend and always told in real life that he wanted to come play for Anderlecht again, he scored 18 goals in 34 games this season (same as irl). 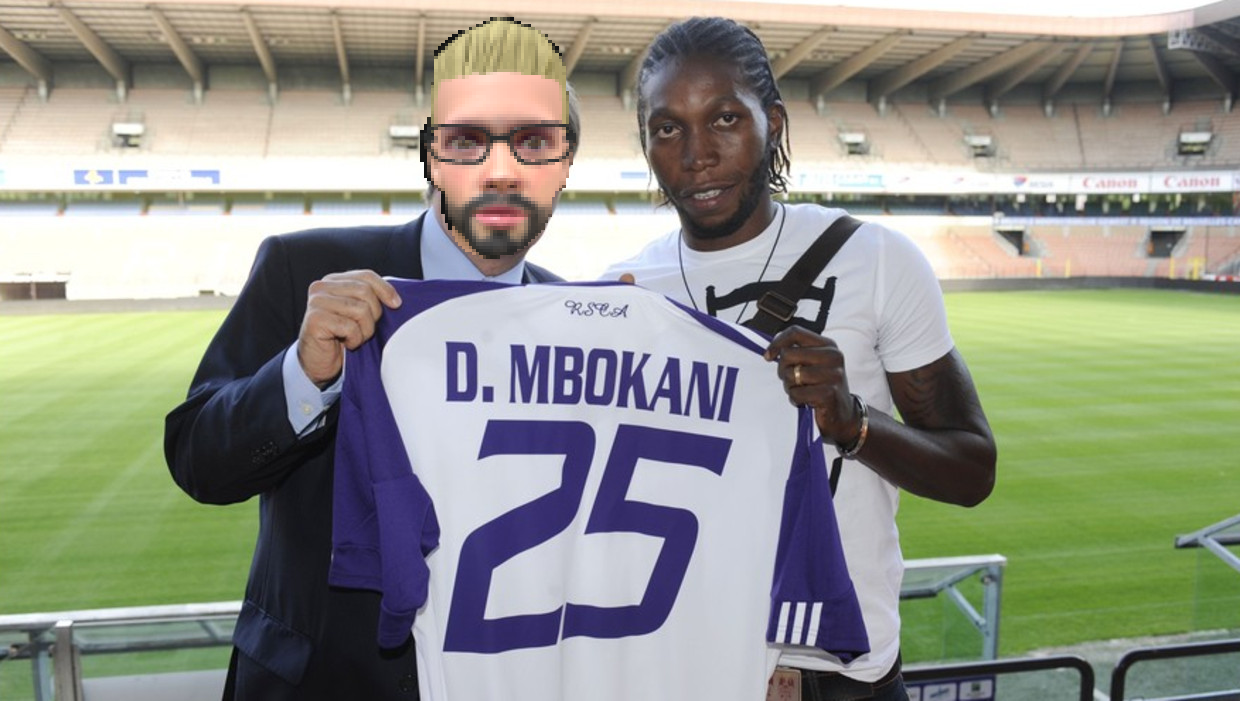 Raphael Holzhauser (4mil.)
- I've bought Raphael Holzhauser from Beerschot for 4 million, his stats and fair good price-range decided to buy him with 34 games, 5 goals, 8 assists, 6 MOTM and 7.23 average. Wonder what he can bring. 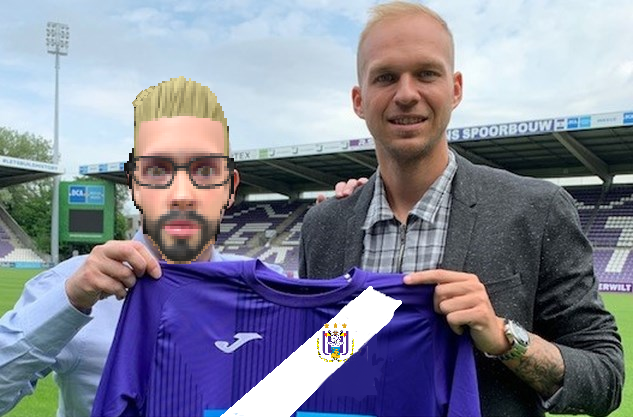 Gilbert Koomson (1.8m)
- Gilbert Koomson comes over from SK Brann for 1.8m euros, a player below the RSCA-level (I think) but really cheap and low salary, I bought him cause I trust in the future of Mohammed El Khatib (newgen), so if Mo breaks thru this season I don't have an expensive alternative on the bench. 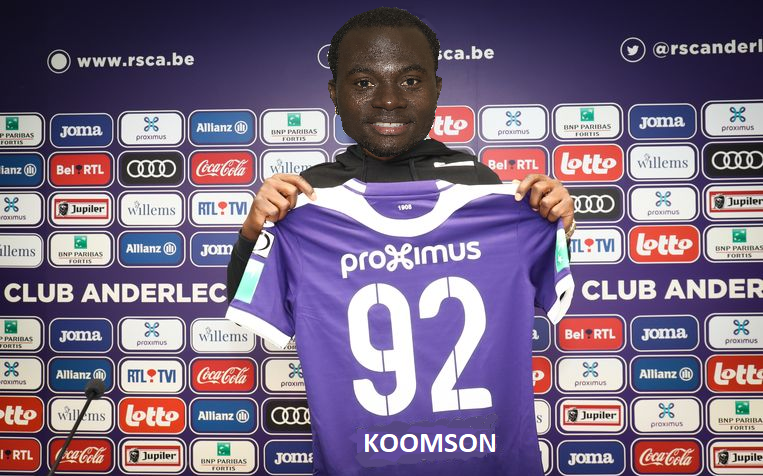 - First out going transfer is Kemar Roofe leaving for 8m (same as Anderlecht bought him the year before) to Burnley in the Premier League. He ended with 13 games (1 started), 1 goal and 6.81 average. Really happy to get 8 mil after playing so less. 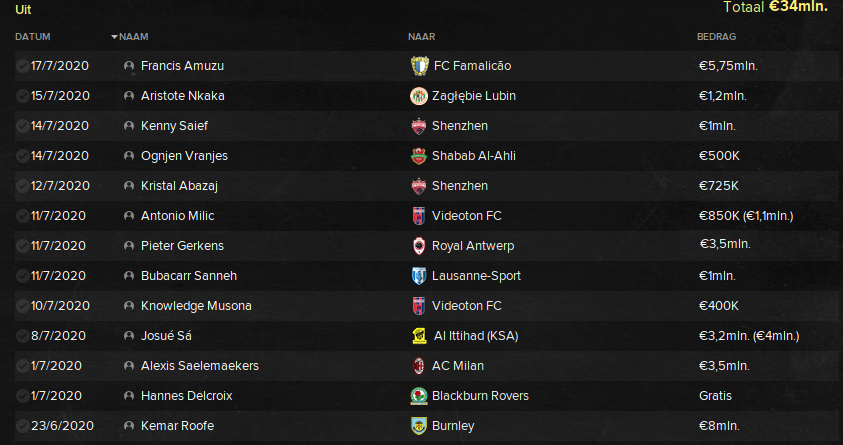 At the moment there 13 outgoing transfers (a bit to much to report every single one of them). This saved me +1.3million / month. I'll post an IN and OUT view after the transfer window is closed.


Eoin97 & Justice: Thanks a lot mate, if you saw our process I only can make that this is a deserved title.
ScottT: I'm very happy, if you look at the stats that shows another game
J_ames: True mate I thought he was going to ruin it but he had a beautiful come back if you see he didn't play a couple of years. Hopefully irl he will do it too. (not that red card haha)
TheLFCFan & One More Game: Thanks guys, it was a nice year!
Griffo: Yeah this year it was even a catastrophe to arrange it, they told everyone the league would extend for one year for 18 clubs, so no problems with relegated clubs and the clubs who were playing a play-off for promotion, but now they still need to play that return for promotion and the current last one relegates.
Login to Quote

Zed
2 years
Very nice that you've been able to keep a hold of Verschaeren! When I did an Anderlecht career this FM he left after only a year. But with that release clause he might still leave you soon... Hope you can keep a hold of your other talents!
1
Login to Quote

TheLFCFan
2 years
A shame to hear that the database hasn't quite worked out. Just means from now on you need to be topping the league every year

Justice
2 years
Gala will be a good game! Good luck in that, could be a huge influx of money for the club if you win!
1
Login to Quote

Griffo
2 years
How about that Andorran Assassin! We need more of him haha!
1
Login to Quote

J_ames
2 years
At least the game against Gala is at home, so you'll have that small advantage still. A huge game for the club, one that could definitely solve your financial woes. The club has made some responsible moves by bringing in the likes of Mbokani, Holzhauser and Koomson, and the sales have certainly helped to chip away the debt of the club too.

Looking forward to seeing the progress of your youngsters, though I feel if they do well: Europe's elite will come in and take them away.
1
Login to Quote

OneMoreGame
2 years
Oh, boy another confusing thing in this division. So it's just because you edited the championship this happened or IRL too?

You need to get in the groups.

And great photoshop skills you've got!

Some lovely signings, now go out and beat Gala, for my sake

Mauve
2 years
We started off the season home with the Super Cup against Royal Antwerp FC. We dominated the whole game with a 24 shots (13 on goal) but made the deciding goal at the 90th minute of Sambi Lokonga.

First Price of the Year

We kicked off the Jupiler Pro League (Belgium 1st division) with 10 (!) other players than I plan to start against Galatasaray in the CL. We got a deserved win, who wasn't really exiciting to see, a lot of miss chances and horrible standard situations, something very positive of this game is the 2 assists of our new Ghanese player Gilbert Koomson, who made his debut today. Also Mo El Khatib played for some 15 minutes with a normal game.


3th Round Q Champions League (First Leg)
In this first leg away, we meet Galatasaray SK. Bit of a difficult opponent, we need to remember that there's another round after this before we can get it to the group stage 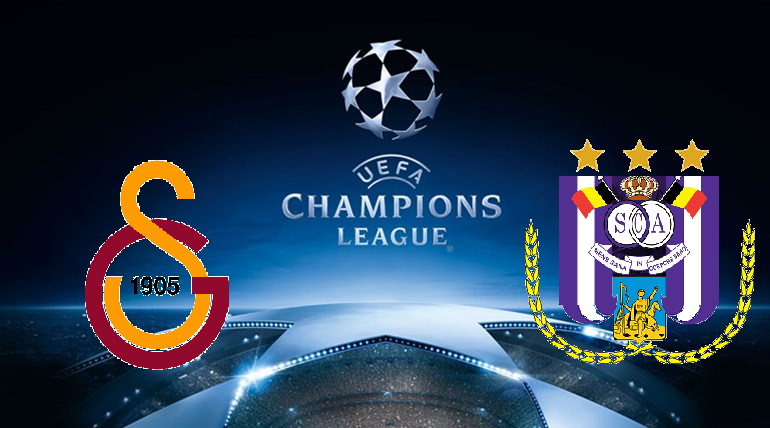 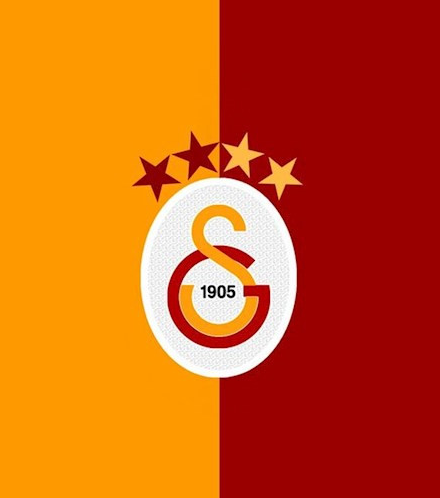 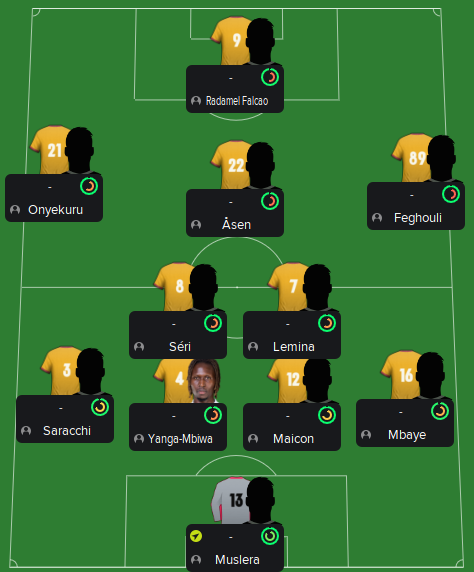 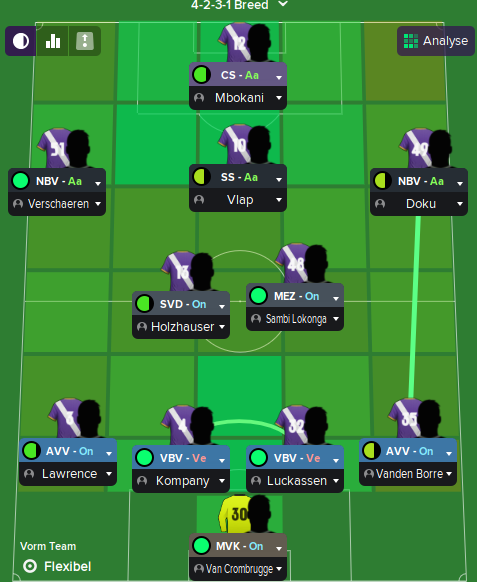 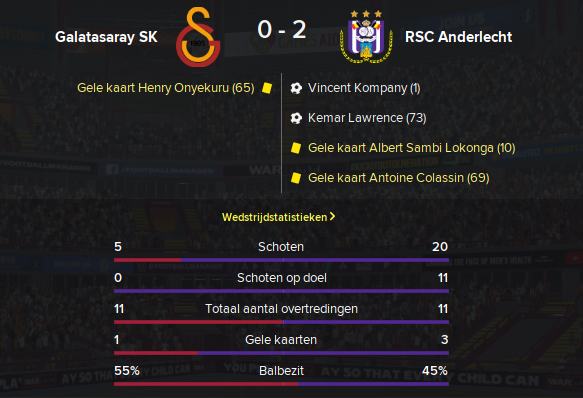 Very nice win, we're sitting in a seat for the return at home.

Zed: Yeah mate, it wasn't easy but I think winning the title did help. Also the project of bringing a lot of youth players is working, I bet 37m is a good price for him.
TheLFCFan: Yeah true mate, gotta see it as another objective, It's doesn't disturb the save in any other so It's ok.
Justice: We did a great job with the 0-2 now, but won't play with a B-team in the return haha.
ScottT: Yeah he's one of my favourite players in years, wished he came back in real life to Anderlecht.
Griffo: Haha yeah I hope there's a chance that there can be one good player of such a low-level country, don't know if it's possible but potential looks to be promising.
J_ames: "Sadly enough that's true mate, they will come and take, I just need to hope to have a decent youngsters coming after, so maybe after a time we can ask higher bids.
OneMoreGame: At the moment they changed the play-off system irl (6 => 4 clubs). They still playing with 16 cause at the end some clubs backed out of the agreement of playing for one season with 18 clubs.
Jack: Haha yeah mate hope to get him more in screen.
Login to Quote

ScottT
2 years
A big win away in Turkey. That will do you many favour in the return-leg.
1
Login to Quote

Griffo
2 years
Does your club have Kompany? is your club about to play in a big game?

Well we all know whats coming next

OneMoreGame
2 years
Great win away from home and you're almost there!

Strange, because our league (bulgarian league) was copied by yours, as after the regular season there are a top six, and the bottom eight is split into two groups of 4. Also we have another strange rule, the last eurpean spot is determined with a final match between the 3rd placed team and the winner of the bottom eight playoffs. For now it never happened the weaker side to win, however it's really strange rule.
Login to Quote