FMBlake
2 years • Edited
Adriano Leite Ribeiro (born February 17, 1982), commonly known simply as Adriano, is a Brazilian former professional footballer. A powerful striker known for his long range left footed strikes, Adriano's career was however marked by inconsistency. One of the best strikers in the world in the mid 2000's, he had five prolific seasons in Italy with Parma and Inter Milan, earning the nickname L'Imperatore (the Emperor), before a decline in his performances which coincided with the death of his father.

Adriano started his career in 1999, in Flamengo's youth squad and earned promotion to the senior squad one year later. He made his team debut on 2 February 2000 against Botafogo. He scored a goal against São Paulo in the same competition 4 days later.

Adriano was a left-footed player, who was gifted with excellent ball control, dribbling ability, and creativity. He was also a strong forward, with an eye for goal, and an immensely powerful striker of the ball with his left foot, as well as was an accurate free-kick taker; he was also effective in the air, and had the ability to link-up with his teammates and provide assists. Regarded as a highly promising player in his youth, Adriano's qualities and playing style drew comparisons with that of compatriot Ronaldo, and he was even initially regarded as his potential successor in the media. Despite his natural talent, Adriano's consistency, character, fitness, and work-rate were brought into question after the death of his father; moreover, his struggles with depression and alcoholism, combined with his hedonistic and turbulent lifestyle off the pitch, as well as his personal troubles, injury struggles, and lack of discipline in training, also contributed to his significant weight gain as his career progressed. Due to his inconsistency in later years, he was widely regarded in the media for failing to live up to his initial potential. 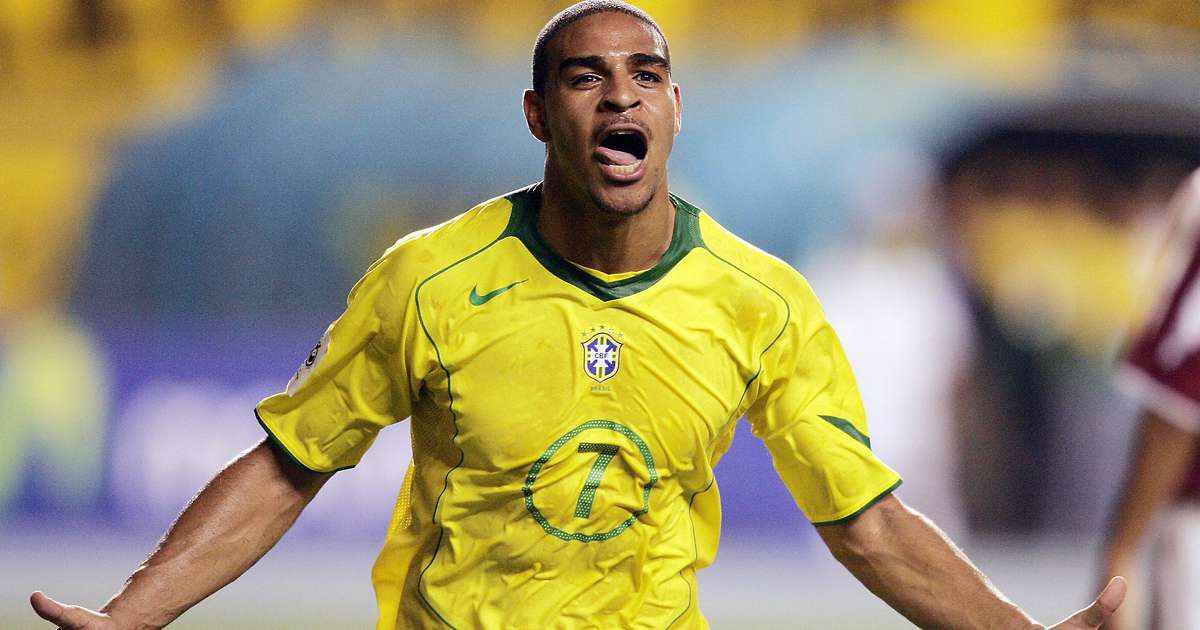 Adriano now has a new opportunity, back at the club where it all began. Adriano is the new manager of Flamengo. At 38 years of age, he is a very young manager, with a lot to prove. This is his first chance at management after his playing career ended in 2016. Expectations will be high, but he will have the support of the fans as one of their own. His focus is to do as well as he can with the club that gave him his professional debut. 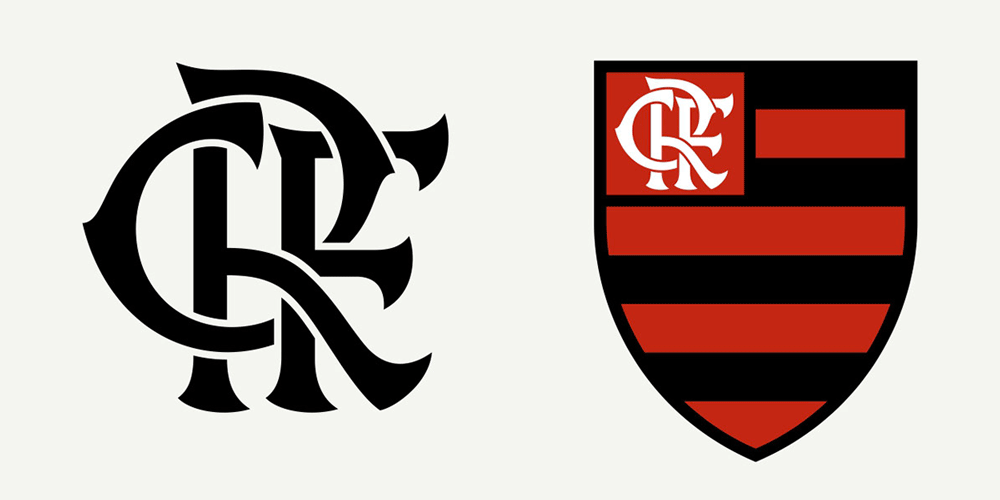 Life in management begins for Adriano at a club with high expectations. The Flamengo board expect Adriano to deliver the league title in his first season in management, while developing young players, and signing high reputation players. The board also expect Adriano to guide the club to the Final of the Brazilian Cup.
Although these seem like high expectations, Adriano has a strong squad to work with and a decent transfer budget for a Brazilian squad. Flamengo are predicted to win the league, and are certainly going to be expected to be challenging for the title, and every other competition they play in. 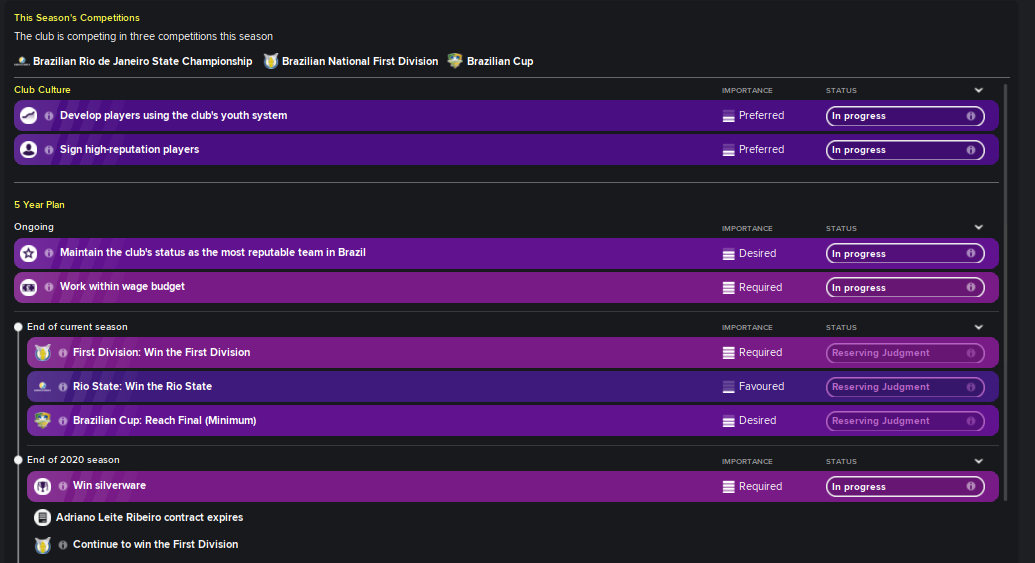 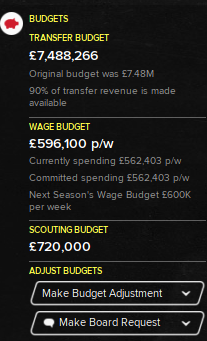 Adriano will have just over £7 million to spend in the first season, but looking at the squad he already has, he may not need to spend much at all, and could look to work with what he has available.
Here is a closer look at the current Flamengo squad. The have great ability in every position, although they lack players at right-back with former Bayern Munich defender, Rafinha, the only natural right-back in the first team squad.
The key players for Adriano will be;
Striker, Gabriel Barbosa ‘Gabigol’, recently signed from Inter Milan.
Attacking Midfielder, De Arrascaeta, a Uruguay with incredible technical ability.
Centre Midfielder, Gerson, recently signed from Roma, a 21-year-old talent.
Centre Back, Rodrigo Caio, a classy ball playing defender signed this season from Sao Paulo
Goalkeepr, Diego Alves, formerly of Valencia.

There are many more key players, but these five mentioned will surely be the core of Adriano’s squad this season, featuring in most of the games.

ScottT
2 years
Good luck. Another player I recognise is Thiago Maia, quite well-known for his talent on previous FM games.
1
Login to Quote

Tango
2 years
this squad is definitely the strongest one in South America, you'll get some silverware easily
1
Login to Quote

First Games for Adriano as Manager

Adriano’s first game as manager was a friendly match against Brazil 2nd division side Londrina. Adriano set the team up playing a 4-2-3-1 wide, with a focus on possession, but with an attacking mentality. Flamengo ran out 3-1 winners, Barbosa scored the first goal of the Adriano era, and Ribeiro also got in on the act. Londrina pulled a goal back late in the game with only their second shot on target. Adriano would be pleased with how his team played in their first game. 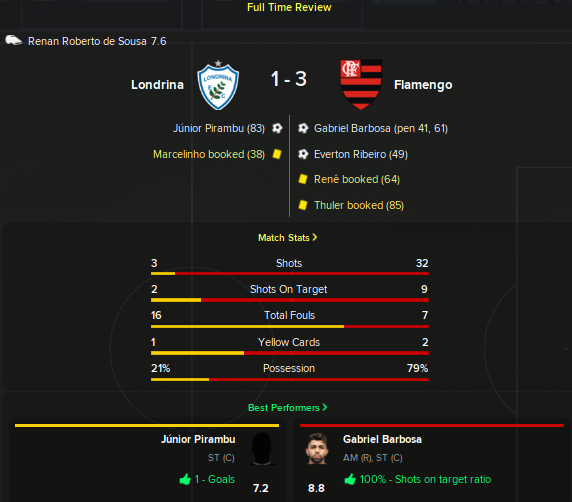 Adriano’s first competitive game was against Portuguesa in the Rio de Janeiro State Championship. Rafinha opened to the scoring with an absolute rocket of a goal. Barbosa and Henrique also got on the scoresheet and Flamengo won 3-1. A perfect start from Adriano, but a slight concern early on. Flamengo shouldn’t really be conceding against poor opposition. 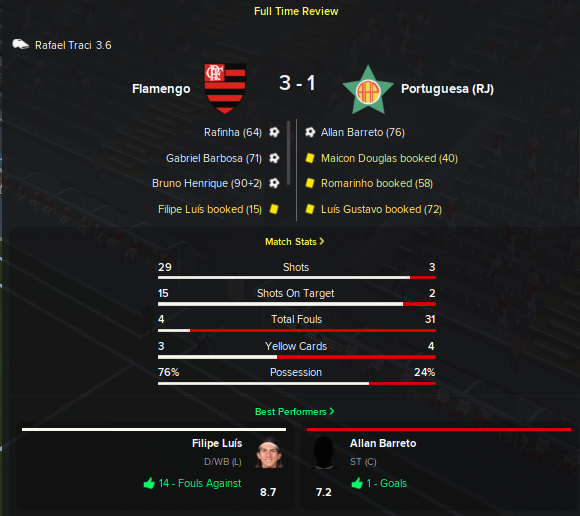 ScottT - Thiago Maia is a great player too, we also have Felipe Luis (former Atletico) and Diego (former Wolfsburg), a very strong squad. I am hoping I can teach them some of the skills I learnt during my career, and I will try to be a mentor so they don't suffer the same mistakes that I made.

Tango - With the talent we have, we should be able to do well. But this is my first managerial job, so go easy on me

Tango
2 years
very tasty group in the Copa Libertadores, in real life that would be wide open

in FM, you and River will win by a landslide
1
Login to Quote

ScottT
2 years
Looking forward to the battles against River!
1
Login to Quote

TheLFCFan
2 years
A very different save here to your previous. Very much looking forward to seeing how it goes! Good luck.
1
Login to Quote

First Tough Game
Adriano's first real test as a manager, was the fixture against Fluminense in the Rio State Championship. After beating Americano 4-0 in their last match, they were predicted favourites to win the tie. Barbosa has been key for Adriano so far this season, scoring a brace in the last game taking his tally to 3 goals in 2 games.

It was Gabigol once more who gave Flamengo a 1-0 lead over Fluminense in the 54th minute. But then, in the dying moments of the game, substitute Nene, former PSG player, scored a stunning free-kick to equalize for Fluminense. Adriano's first real test ended in a 1-1 draw, but his side played well and will take the positives from the match. 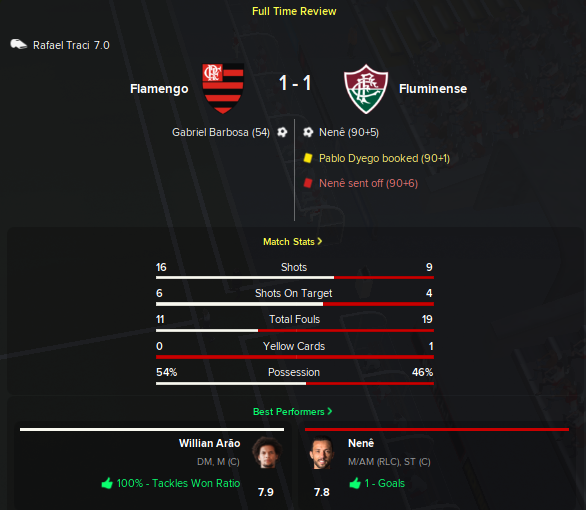 Tango - The draw looks favorable for us yes, but River will be a real test!

ScottT - So am I mate, the Brazilian's should always be able to beat the Argentines

Jack - Gabigol has been the star so far, and I am hoping his form will continue!

TheLFCFan - Cheers mate! Hopefully I can do well

ScottT
2 years
That's a bitter pill to swallow. Nene is a right throwback though!
1
Login to Quote

A Perfect Response
After dropping points against Fluminense, Adriano was demanding a good performance from his team in their next game. Gabriel Barbosa picked up a knock in training so couldn't feature in the match. 17 year old, Lincoln was given a starting place up front, but there was another man who stole the spotlight. Midfielder Willian Arão put in the best performance so far this season scoring four goals against Madureira in a 5-0 victory. The box to box midfielder was lethal from long range, all four of his goals came from outside the box. A perfect response by Ariano's players. 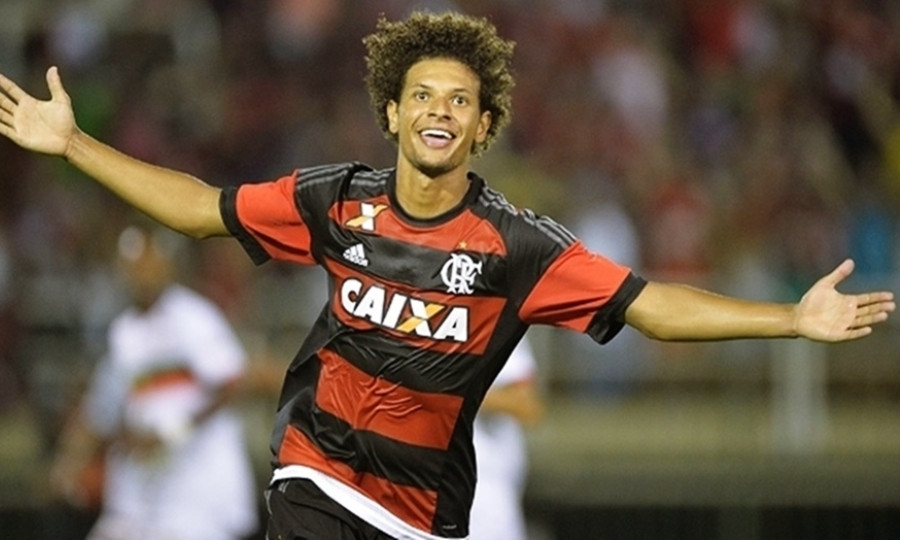 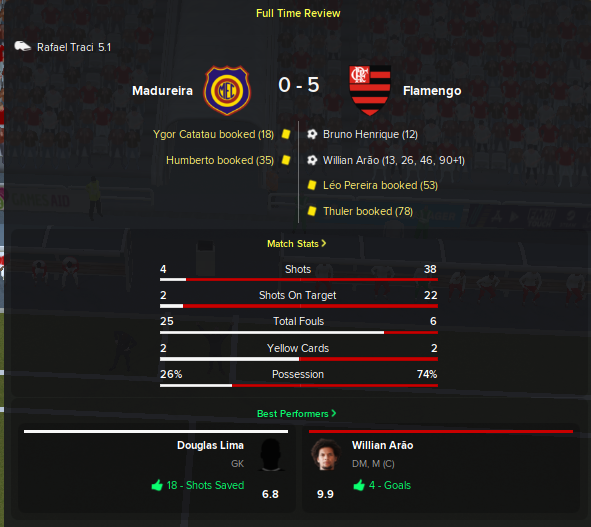 ScottT - It was a tough goal to concede, but we had the last laugh as he was sent off just 1 minute later! What a performance by the boys in our next game though, I was delighted with them as they didn't let that goal ruin their morale. We are looking dominant and glowing with confidence.
Login to Quote

Local Derby
Flamengo won their last match 2-0 against Volta Redonda, goals from Bruno Henrique and Gabigol earned Flamengo three points. The next match though was Adriano's first taste of a derby match. They faced Vasco De Gama who are Flamengo's local rival. Vasco De Gama's key player is Colombian star Freddy Guarin. Playing away from home was a challenge for Adriano's team, although they dominated the match with 66% possession and 20 shots, they couldn't get the goal to earn the win. Adriano's side have now drawn both their tougher games, and he may need to look at tinkering his tactic when playing better teams. The next fixture is the first match of the Copa Libertadores against River Plate at the famous Maracanã. This will certainly be the biggest test of Adriano's managerial career so far. 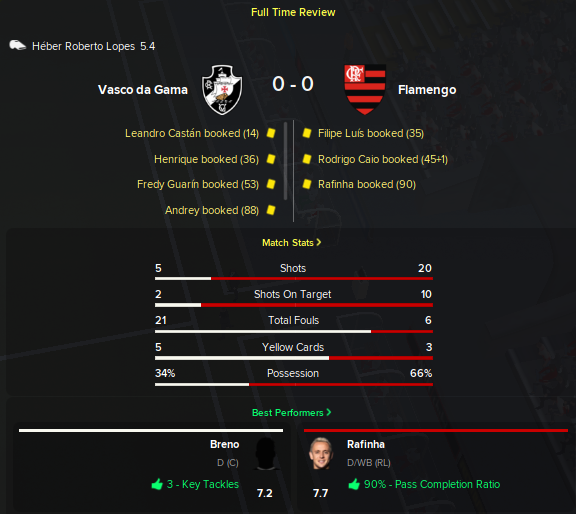