Purple Patch
After suffering defeat in the cup to Santos, Adriano’s side faced Atletico Mineiro in the league. Flamengo went 2-0 up after scoring twice in the space of 4 minutes thanks to Bruno Henrique and Gabigol. At half time Adriano’s side were winning 2-0, but not playing well with Mineiro creating far more chances. In the second half Allan scored a fantastic free kick to make it 2-1, and then Clayton scored to make it 2-2 with 20 minutes left to play. With pretty much the last play of the game, Franco Di Santo scored a header that Diego Alves should have saved, to win the game for Mineiro. Just Flamengo’s second loss of the season, and the first time this season that Adriano has faced back to back defeats. A little purple patch that he needs to fix fast with Sao Paulo right behind Flamengo in the league. Just 2 points separate the top two teams. 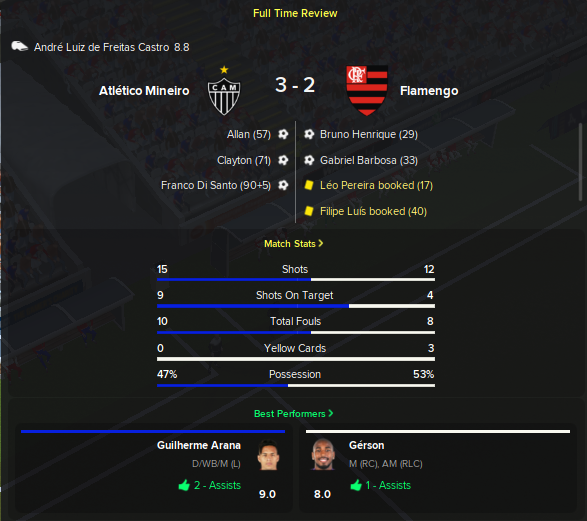 In the next match against Corinthians Adriano made a few changes to the personal but it didn’t really improve his fortune. Gabigol gave Flamengo an early lead, but then Rodrigo Caio booted the ball into his own net from a corner. The match ended 1-1 with Flamengo now extending their run with a win to 4 games. Is this time for Adriano to look at employing a different tactic as maybe his 4-2-3-1 is being found out by other teams? 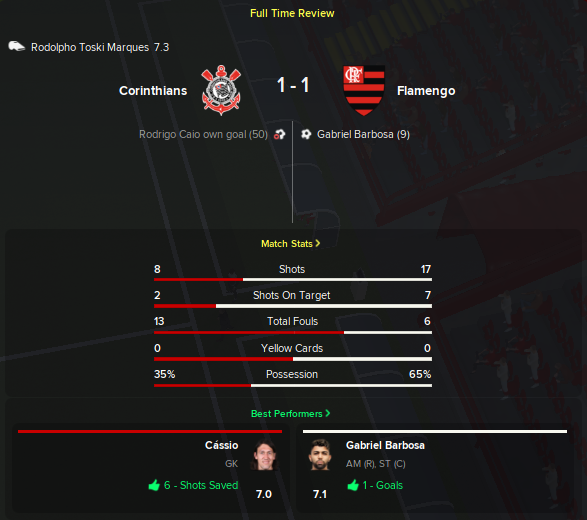 Adriano decided to mix things up against Internacional. He dropped his attacking midfielder and played a defensive midfielder, using a 4-3-3 DM. His side still looked to play a possession-based style of play just slightly more defensive. Flamengo managed to keep the ball and dominate the game against Inter, with the only goal coming from new signing Marco Antonio. He finished off a lovely move and earnt Flamengo an important win. 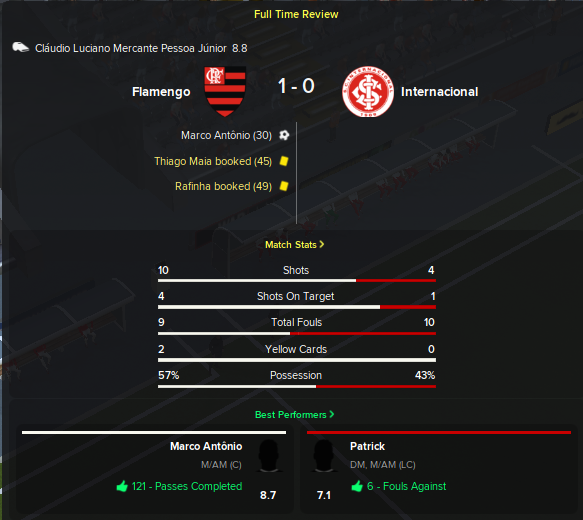 ScottT - I thought we were very unlucky against Santos, the lads deserved to play in the final.
Tango - We will learn and come back stronger.
TheLFCFan - My focus is certainly on developing the club and focusing on youth, I cannot wait to see who we get coming through the academy this season, both Silveira and Antonio have fit in well with the team.
Zed - I am looking at other strikers, but we also have young Lincoln who is a quality talent with plenty of room to develop into a world class striker.
Login to Quote

ScottT
2 years
Quite the collapse against Mineiro. Franco Di Santo getting on the scoresheet so late on to steal not just a point after being 2-0 up, but all three, must have been bitterly disappointing. A slight tweak to the system against Internacional reaps the rewards of a win. It gets Adriano's men back on track after a short spell without a win.
1
Login to Quote

TheLFCFan
2 years
Hmm not the best of months but you have turned it around slightly with that win to end it off. I do wonder how many tactic changes we are going to see in Adriano's career