Top of the League
Adriano faced Atletico Mineiro away from home in the second leg of the cup quarter final. After winning the first leg at home 1-0, Flamengo were in a good position to progress into the semis. Everton Ribeiro gave Flamengo an early lead after just 6 minutes. Then in the 76th minute Allan dribbled the length of the pitch to equalize for Mineiro. The game ended 1-1, and Flamengo progressed into the semi 2-1 on aggregate. Adriano will face Santos in the semi-final. 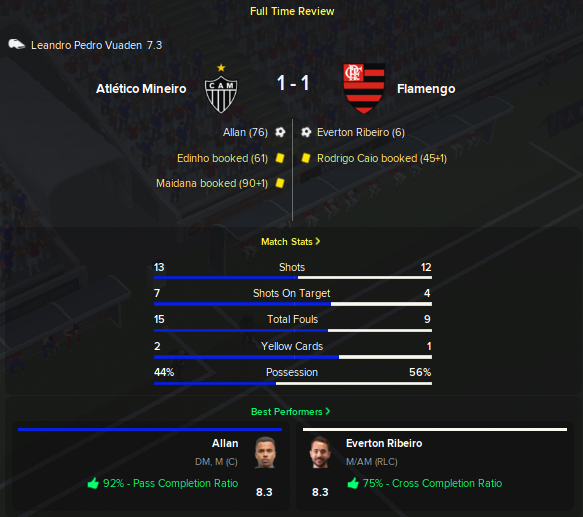 Adriano’s next league game came against a local rival Botafogo. They were doing alright this season and were sitting 5th in the league before the game. Japanese international Keisuke Honda gave the home team an early lead, scoring after just 5 minutes. Bruno Henrique pulled one back for Flamengo 10 minutes later. Then it was the Willian Arao-show. The midfielder scored a long-range striker after 29 minutes, and then his second, a header to give Flamengo a 3-1 win. Botafogo midfielder Cortez picked up his second yellow with just one-minute left to play. A great win for Adriano’s side who sit top of the league still, and there is only one team really in the title race with Flamengo, Sao Paulo continue to play well and challenge at the top. Adriano’s next game would come against Paraguayan side, Cristal in the Copa Libertadores. 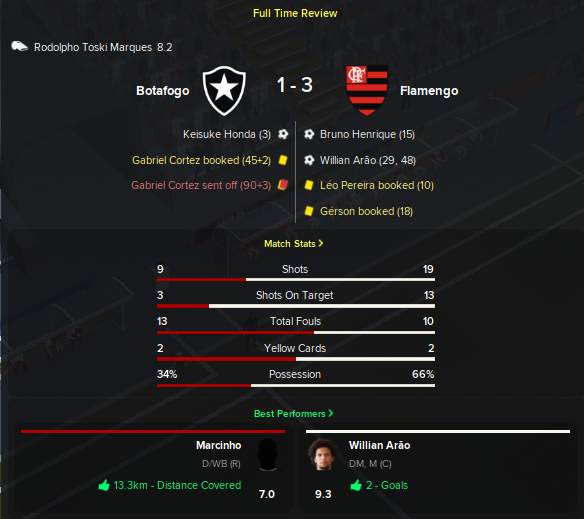 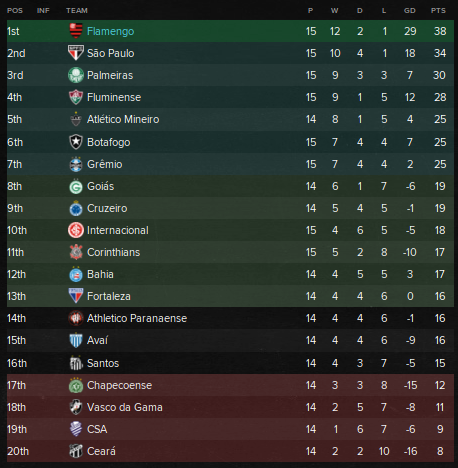 ScottT
2 years
Looking pretty strong! Hopefully you can gather some distance on Sao Paulo with a run of consistent result as you have been.
1
Login to Quote

Facing Cristal
Adriano travelled to Paraguay with his team to play Sporting Cristal in the Copa Libertadores second round. Flamengo had a much better side than opponents Sporting Cristal but playing away from home was always going to be tough, and a good result would be an important to set up the home tie in Brazil. In a rather dull game, Flamengo dominated possession and chances created, a single headed goal from Gabigol was enough to give Adriano’s side a 1-0 win. Although the score wasn’t convincing his team played very well away from home. Flamengo haven’t won the Copa Libertadores since 1981, so it would be nothing short of a miracle if Adriano could pull it off in his first season as a manager. A Brazilian side has only won the competition once in the past five seasons, Gremio winning in 2017. 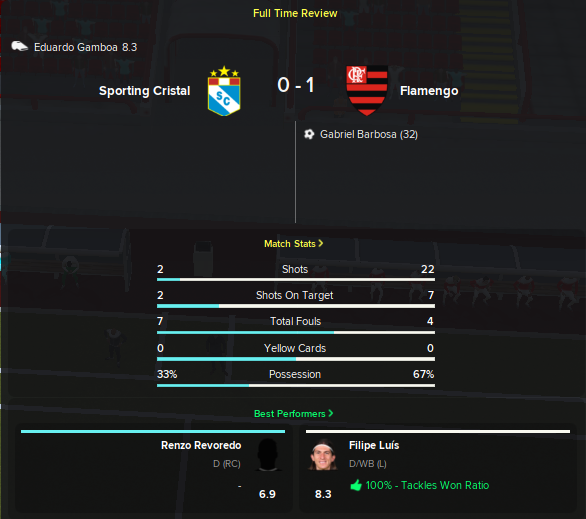 With the second leg against Cristal just three days after the next league game, Adriano had to rotate the team. He made 7 changes from the side that beat Cristal and they faced local rivals Vasco de Gama. Vasco have struggled this season and find themselves in the relegation zone, but form doesn’t mean anything in a local derby. Flamengo played well, dominating possession as they have done so well most of the season but couldn’t get a goal. The match ended 0-0, Adriano would have liked a win, but also, he must be happy not to lose and can now focus on progressing into the Copa Libertadores quarter final. 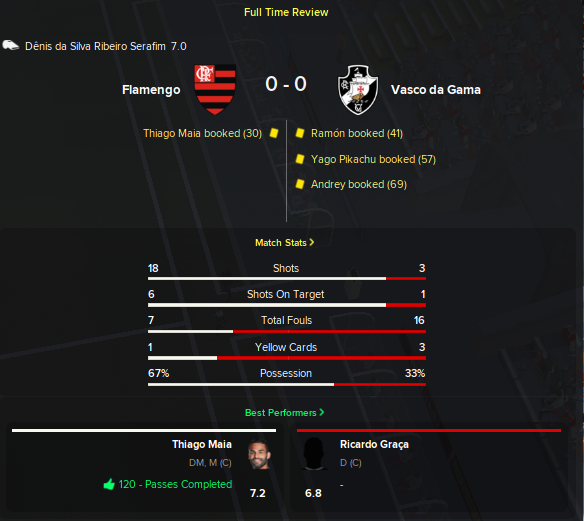 After winning the first leg away from home 1-0, Adriano wanted his side to go out and attack Cristal at home. It only took Flamengo 4 minutes to take the lead, Everton Ribeiro with the goal. Defender Leo Pereira made it 2-0, and that is how the game ended. Adriano guided his team into the Copa Libertadores quarter final where they will face Argentine side, Club Atlético Rosario Central. Adriano has been rather lucky, with a favourable draw and the buzz around the club is growing as Adriano see’s his side sitting top of the league, and dominating in the Copa Libertadores, there are still a lot of games left to play, but Adriano is doing superbly as a new manager. 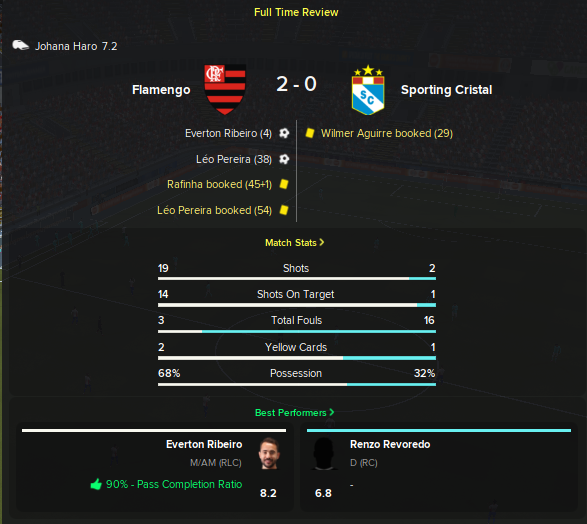 ScottT- That is the aim, if we keep winning and they lose just one or two more games the title will almost be ours already!
Tango - I don't know but they are doing quite well this season.
Deadzpool - We have started well, and I am aiming to bring success to this great club, this is just the beginning!
Login to Quote

Injury Trouble
Adriano’s side faced Chapecoense in the next league match. The opponent famous for the disastrous plane crash the ended the lives of many of their players. Adriano has shown faith in Gabigol this season and continues to start him even when he isn’t scoring. Today, Gabigol opened the scoring after 12 minutes. Willian Arao made it 2-0 after 26 minutes with another long-range strike. Defender, Rodrigo Caio made it 3-0 with a good header, another solid victory for Flamengo. Adriano’s side remain top of the league and put the pressure on Sao Paulo to keep on winning. 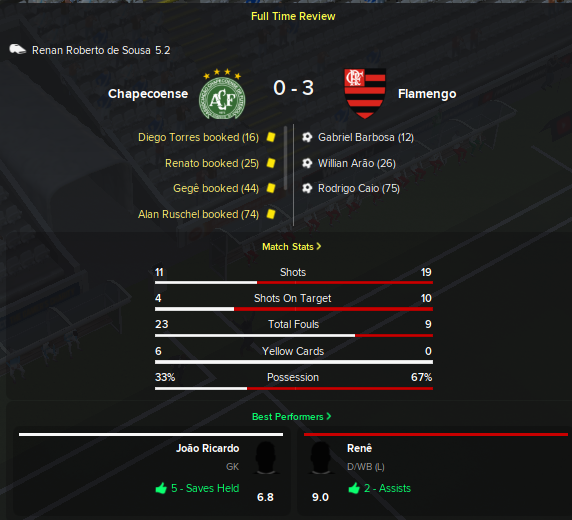 Everton Ribeiro has been an important player for Adriano this season, he has scored 11 goals and got 8 assists in 38 appearances. During training he picked up a neck injury, putting him out of action for 2-3 weeks. He will miss the cup semi-final against Santos, and the Copa Libertadores quarter final. 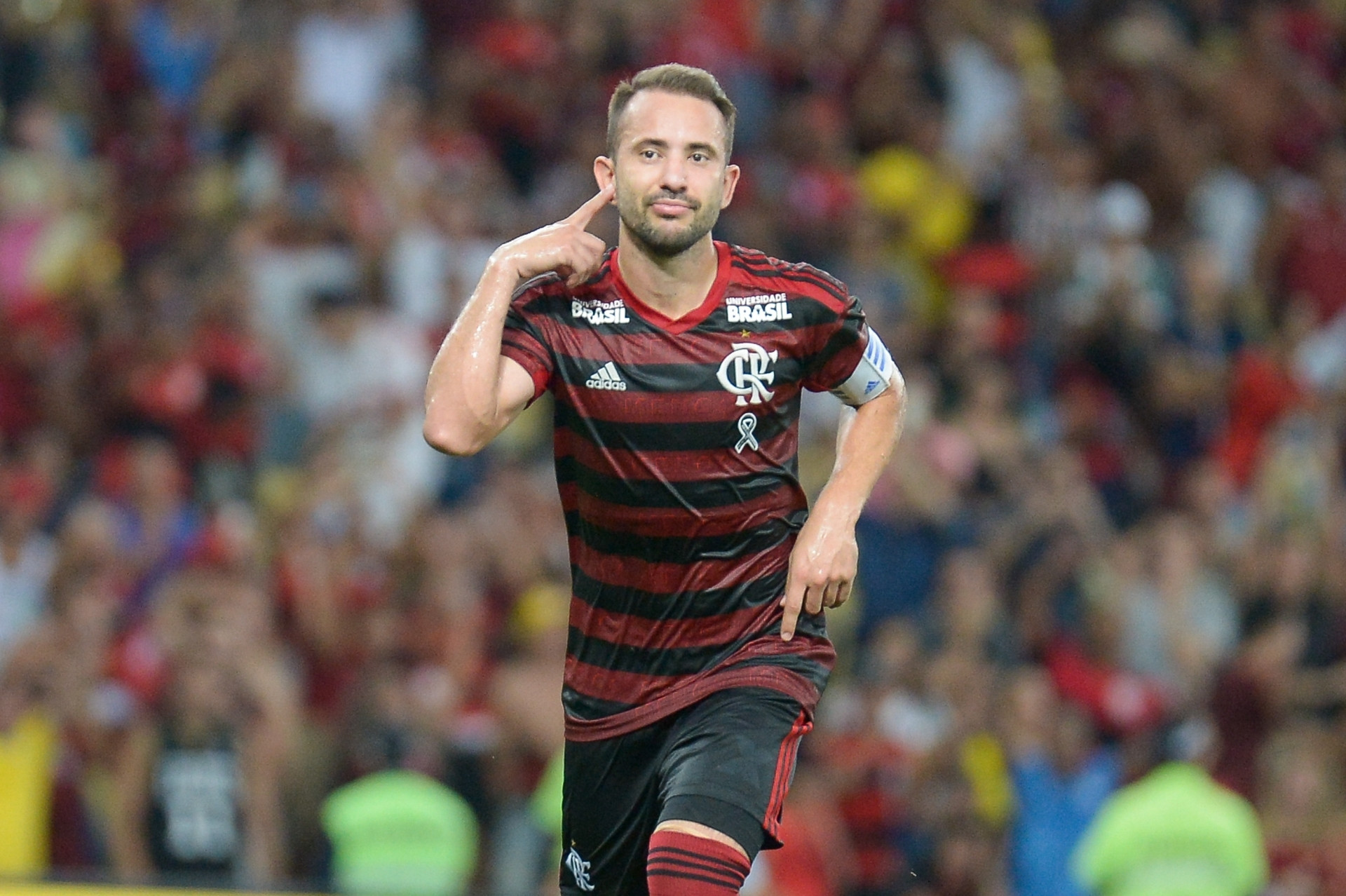 Adriano and has men played Centro Sportivo Alagoano (CSA) next in the league. He decided to start Michael on the right wing to replace the injured Ribeiro and promote 18-year-old Thiago Fernandes from the reserves into the first team. It was Michael who opened the scoring after 28 minutes for Adriano’s side. Bruno Henrique made it 2-0 with a fantastic curling effort. In the 95th minute Flamengo were awarded a penalty, and the experienced defender Rafinha converted coolly. Adriano keeps his side top of the league by 4 point. Sao Paulo continue to win and put the pressure on Flamengo not to drop points. 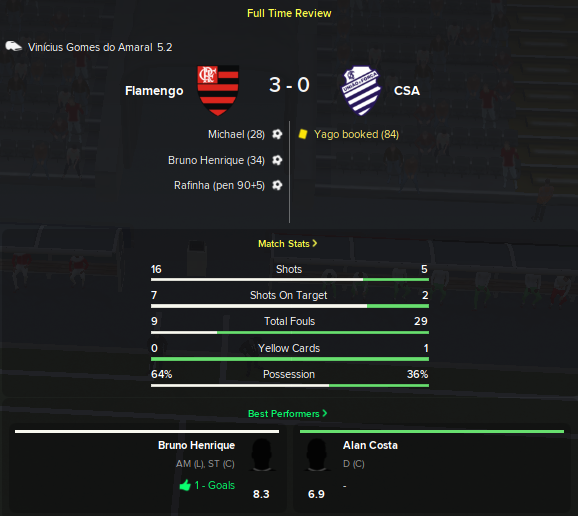 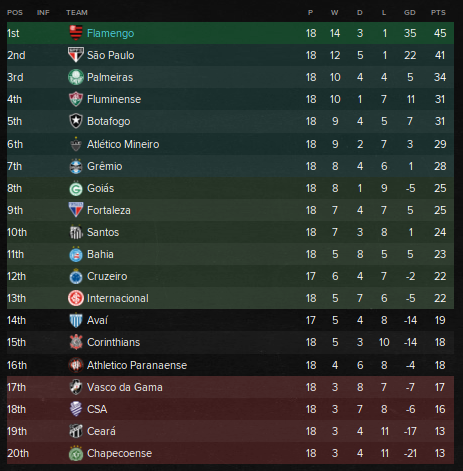 Ruining Rosario
Adriano faced Santos in the Copa Perdigão do Brasil (Brazilian cup) semi final first leg. He was forced to rotate the side due to fatigue and his weakened team couldn’t win the match even when Santos player Raniel was sent off after 73 minutes. Flamengo need to take their chances in the second leg to progress into the final and should be able to as Santos have been in the bottom half of the league all season. 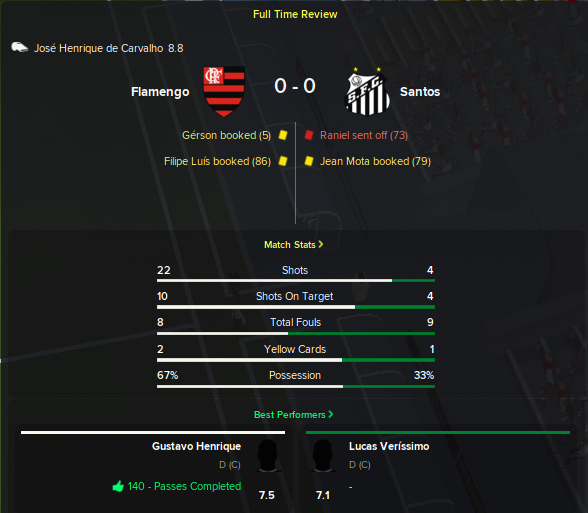 Adriano was left frustrated as his side failed to beat Athletico Paranaense who were 16th in the league going into the match. Paranaense took the lead after 16 minutes through Wellington. Flamengo were awarded a penalty in the 39th minute and Gabigol slotted it to score his 29th goal of the season in all competitions. This was one of the worst performances of the season for Adriano and he needs to see an improvement quickly as the next match is the Copa Libertadores quarter final. 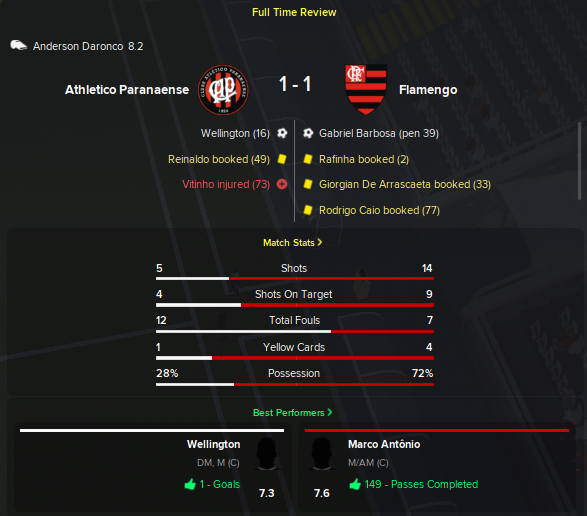 Adriano faced Argentine side Rosaria Central in the Copa Libertadores quarter final. He demanded his team play attacking, compared to the standard positive mentality his side usually play. Bruno Henrique attacked Rosario right from the first whistle and scored the first goal of the match after just 3 minutes. Gabigol doubled the lead with another penalty after 28 minutes. Flamengo bossed the match and made it 3-0 in the 76th minute when Bruno Henrique scored his second of the game. Adriano’s side cruised the match, taking 38 shots to Rosario’s 2. A dominant display that sets up a fairly easy second leg, to progress into the semi-finals. 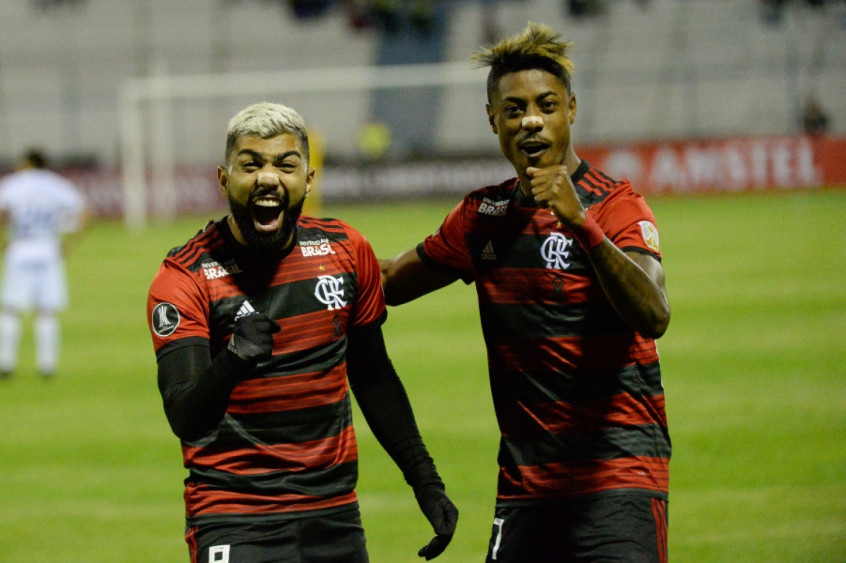 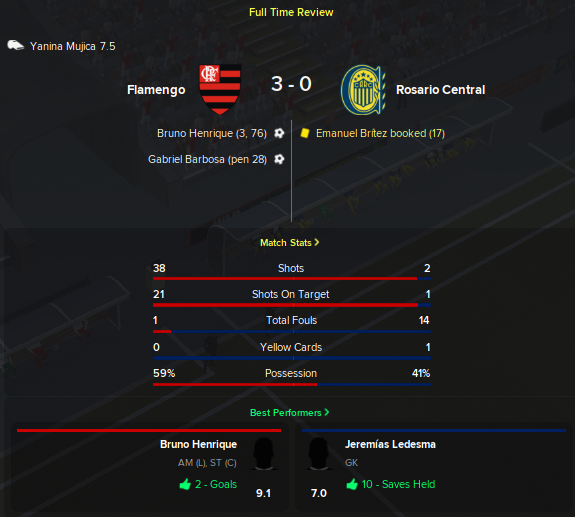 Copa Action
Adriano faced Fortaleza in the league. A single foal for De Arrascaeta was enough to seal three points. An important win for Adriano as Sao Paulo won yet again and just keep on pushing and putting the pressure on Flamengo to win every game. 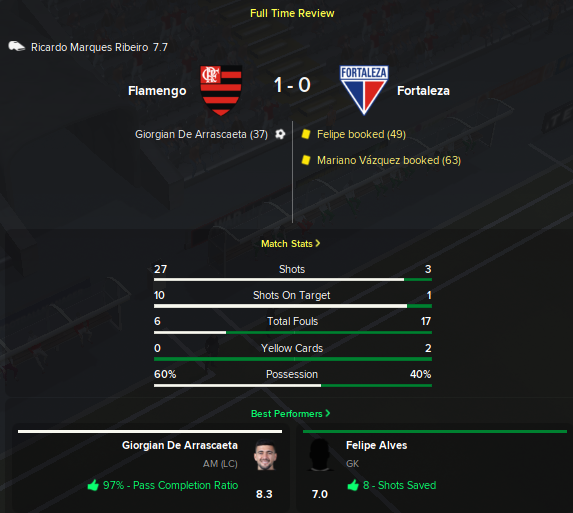 Flamengo travelled to Argentina for the second leg of the Copa Libertadores quarter final. After a 3-0 victory in the first leg, Adriano’s side were confident going into the match. After just 10 minutes Flamengo led 5-0 on aggregate, goals from Gabigol and Michael. In the second half, Willian Arao made it 3-0 on the night, 6-0 on aggregate and Adriano progresses into the semi final with ease. Flamengo will face Colombian side, Deportes Tolima. In the other semi-final, River Plate face Palmeiras. Adriano is hoping Palmeiras advance, as River Plate were hard to break down in the group stage and both games against them resulted in draws. 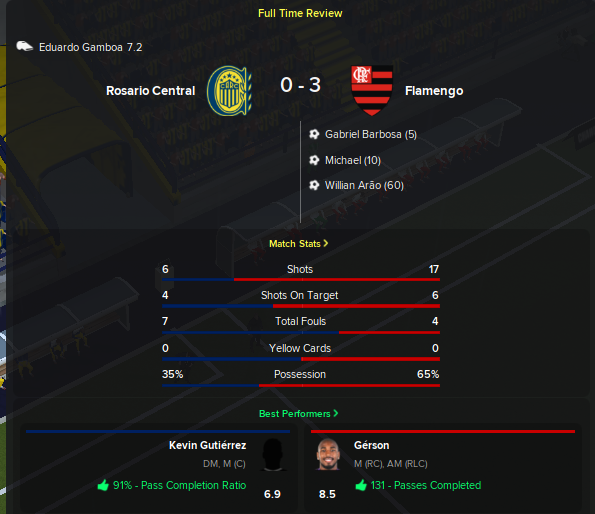 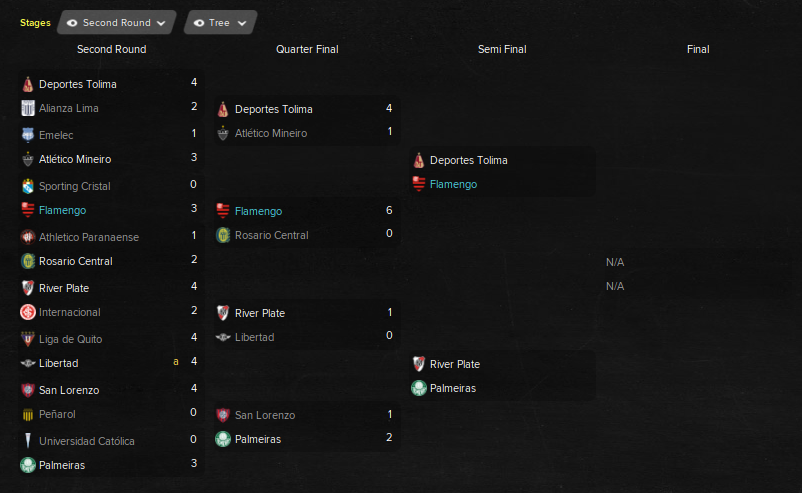 Adriano’s side will play Santos next, twice in 4 days. First in the league, and then in the cup semi-final. The cup game more important as the first leg was 0-0, so Adriano will have to bear that in mind when selecting the squad for the league game.

Zed
2 years
Frustrating results against Santos and Paranaense there, but at least you're still dominating every game, so the results will come again if you keep playing like that!
1
Login to Quote

ScottT
2 years
A great victory in the Libertadores and arguably the easier of the semi-final opponents you could have drawn. I have a feeling that the final could be awaiting Adriano! Another massive semi-final tie awaits in the second-leg against Santos. Good luck.
1
Login to Quote

Santos & Santos
Before the league game against Santos, Sao Paulo lost 3-1 to Botafogo. This was a great opportunity for Flamengo to jump well ahead of Sao Paulo. In the league game Adriano decided to field a very strong team. Reserve left back Rene gave Flamengo a 1-0 lead, but Soteldo equalised for Santos. Gabigol put Flamengo 2-1 up with a great header after 78 minutes, but then Soteldo equalised again for Santos with just 5 minutes left to play. The game ended 2-2, Flamengo move 1 point further ahead of Sao Paulo, but Adriano was disappointed they couldn’t get the win. Santos has been a real tough opponent for Adriano this season and would be a huge test in the next match, with the board expecting Adriano to take Flamengo to the cup final. 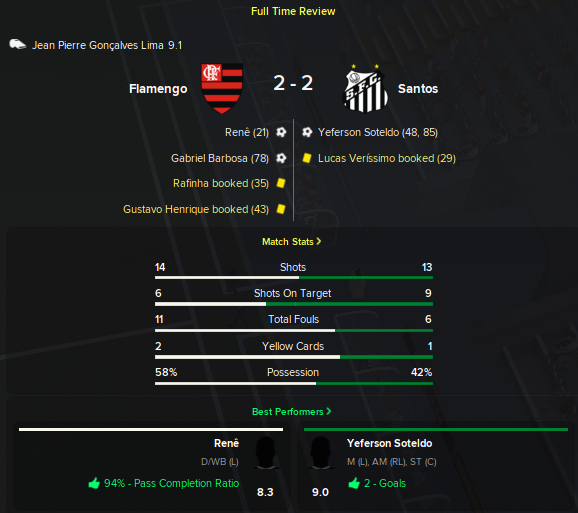 In the semi final it did not go as Adriano had hoped. That man again, Soteldo scored for Santos to send them through to the final with a 1-0 victory. Adriano was gutted and felt his team were the better side. Now the focus is on the league, and the Copa Libertadores semi-final, he cannot afford to fail in that competition too. Santos will play Sao Paulo in the cup final. 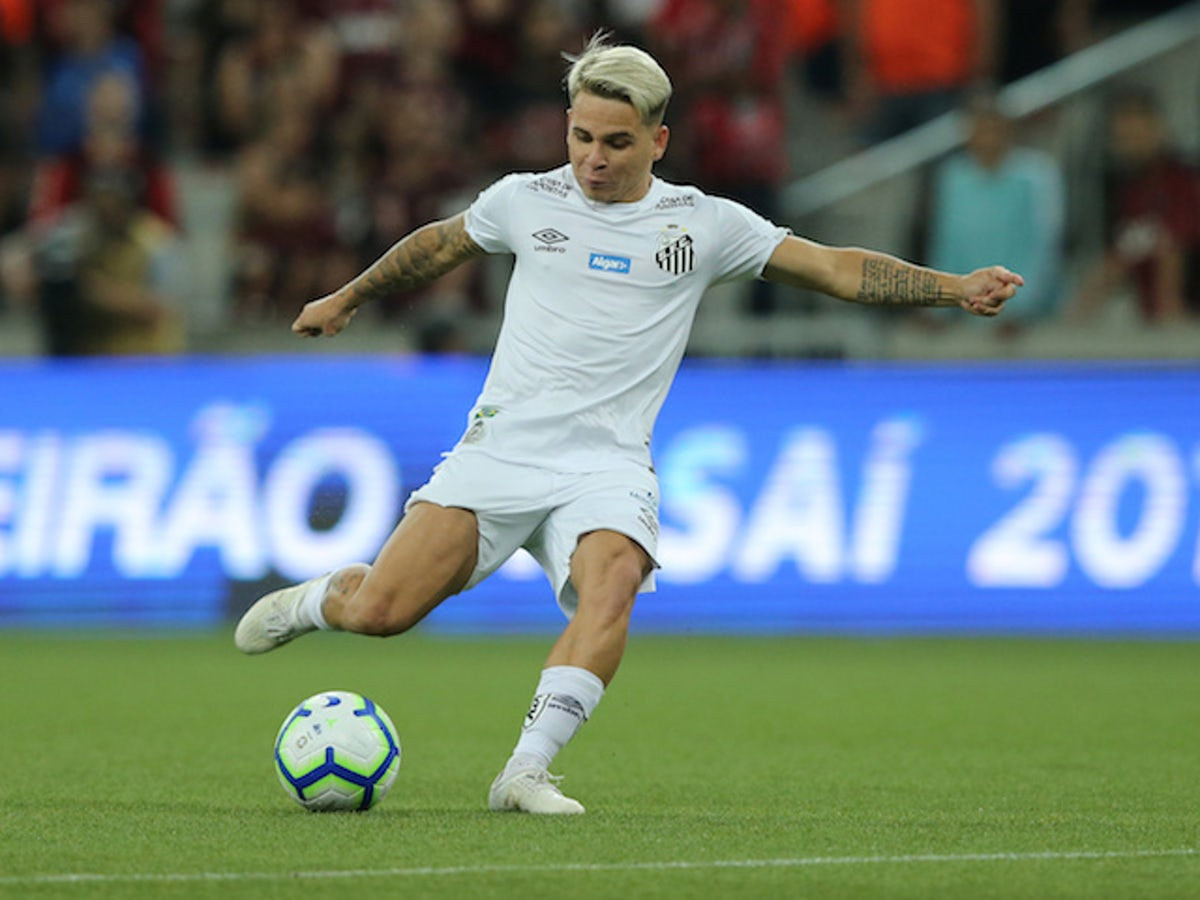 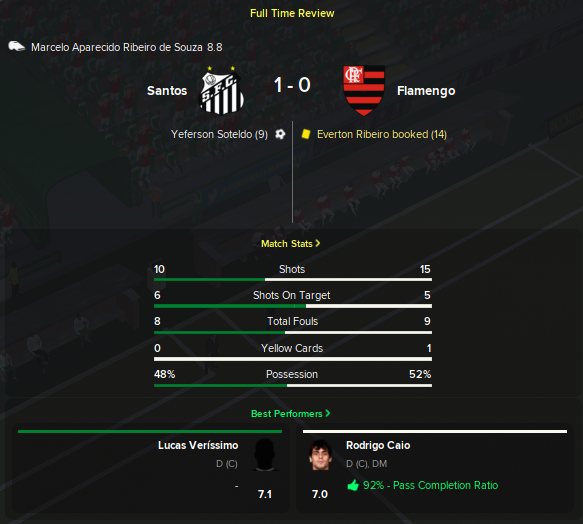 Zed - We are playing well and dominate almost every game, maybe I need to sign a better goal scorer or two to finish the chances we create?
ScottT - We are optimistic in the Libertadores, sadly I couldn't guide the team to the cup final, but I will learn from this loss, and make sure we do better in our next semi final!
Login to Quote

ScottT
2 years
A good effort but unfortunately just edged out. Tough luck that!
1
Login to Quote

Tango
2 years
rather lucky draws at the Copa Libertadores

and really bad that you got knocked out of the cup, this competition has a tasty prize for the winner
Login to Quote

TheLFCFan
2 years
The gap at the top of the league is starting to open up and results are coming along more consistently. A shame to miss out on the cup over two legs but it isn't the main focus. A final could be on it's way for the Copa Libertadores which will be great to see. In terms of the youth intake that preview is very promising as well as the signing of Silveira there could be some very promising young talent at the club for a few years to come!
1
Login to Quote

Zed
2 years
Two annoying results against Santos, with the cup loss being the most unfortunate based on chances. Like you said yourself, maybe you need to sign another good finisher!
1
Login to Quote