2021-01-03 16:25#280410 TheLFCFan : You are building a very talented side here with the most impressive signing certainly being Milner ;). The club is looking strong and I bet the board are happy they didn't give you the boot when relegation was looming in season one. With some of the talent you have now, a European push is looking possible!


Thanks mate.... it was squeaky bum time for a while.... i'll get my arse in gear and get the update done ... ive just finished august and the transfer window.... it will make for a fascinating month,
Login to Quote


August begins as expected with looses V Liverpool and City

Then all aboard the Burnley Express!!

3 Swift victories agains Barnsley, Spurs and Wolves Get the momentum going and the spurs snd wolves wins ( 4-0 & 5-1) are hopefully vindicating my recruitment

Now with 12 internationals in the squad, I feel we are growing into something and although deadline day brings nothing .... oh apart from CHRISTIAN BLOODY ERIKSEN on loan!!! I think we have the balance of flair and grit to get top 8 surely

Harleygator
1 year
A very odd run of results there, but it shows that you can do over bigger sides, even if you're not exactly consistent. Is there any way in future screenshots to show us who is scoring your goals?
Login to Quote

2021-01-08 09:57#280565 Harleygator : A very odd run of results there, but it shows that you can do over bigger sides, even if you're not exactly consistent. Is there any way in future screenshots to show us who is scoring your goals?


Thanks for the reply Harley Gator - is that a bit more what you were after ?

If you are ever in doubt - Always default to Chris Wood!!

thanks for reading - next update should be on over tonight/tomorrow

any thing else in depth people would like to see. Also Disclaimer - this set up for formations players etc. includes no downloads of tactics etc or player shortlists - Its just from years of being an FM fan (not a nerd)

Tango
1 year
that's quite a Robin Hood-esque month, taking from the rich and giving to the poor
1
Login to Quote

ScottT
1 year
The Fulham loss aside, a tidy month for you there.
1
Login to Quote

TheLFCFan
1 year
A tough month of fixtures and you can be pleased with the points you took in the end.
1
Login to Quote

I start with a win in the cup Vs Villa and thankfully dispatch lowly Walsall but in the league I am desperately bad a draw and 3... yes 3 losses Vs Teams I should be beating...

I fear the squad may have come a bit complacent - this digusting prompt drops in the inbox too... thanks.. not. 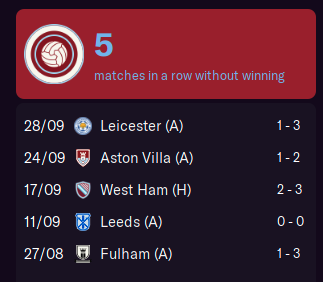 I am going to cancel the training put in for the next week and run it myself ... purely teamwork, bonding and oh yes... stopping the F#cking ball going in the net... I feel my inner John Sitton bubbling... but I want to stay at an angry Warnock if possible

Thanks for the comments, reading and views. all welcome - sorry for the lateness of the updates - work, home schoolings to blame... Blame Boris !
Login to Quote

TheLFCFan
1 year
A very tough month that one!
1
Login to Quote

ScottT
1 year
Not the best of runs lately... Hopefully next month can bring an upturn in results.
1
Login to Quote

From Bad to worse...


I drive to training first weekend of October and Tom Petty - Freefallin' seems to be on every radio station I listen too.....

Tom ends up being right and I can't buy a win in October either!!

My 5without a win rapidly turns to 9 ... then 10 afterArsenal

Ionically, I have my best game V's top of the tree Man U with some decent-ish stats. 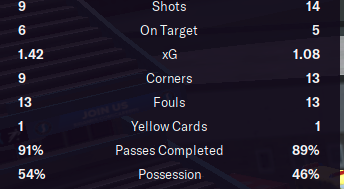 The Arsenal game is the on that tips me over the edge as its:
My 100th game in charge

I start well V Arsenal aswell, get a goal in front.... then this happens...

This is how the form is going, mr dependable shanks it wide and Arsenal go on to condemn me to my 10th game without a win - Which embarrassingly puts me in 19th place !!

WHAT THE F*CK IS GOING ON

I keep a small eye on the World Cup, but with only two players there ( Maddison missed out as he's been as awful as the rest of the squad lately )

I spend the 50 days trying to resurrect some confidence and ethic in my bewildered squad - I try and look deeper at the tactics and stats and where things are going wrong ! one player I don't need to worry about for a bit though, is Mr Eriksen - F*ck my life, when will this bad run end

For those interested, the World Cup headlines are as follows. ..

Classic 00's England - don't get out of the group

Whilst this is going on, the players train well and I mix a few in with the Under 23's and play 3 games to boost morale.

I then go into a "relegation" game Vs Norwich ( Jesus - its 3rd season and I'm saying relegation... )

Im that shook by my form ( i mean in the last 5 premiership games we, ( or should I say Chris Wood didn't even look like scoring) so I drop him for Edouard - his stats are better and maybe the burden of the captaincy has took his eyes literally off the ball.. 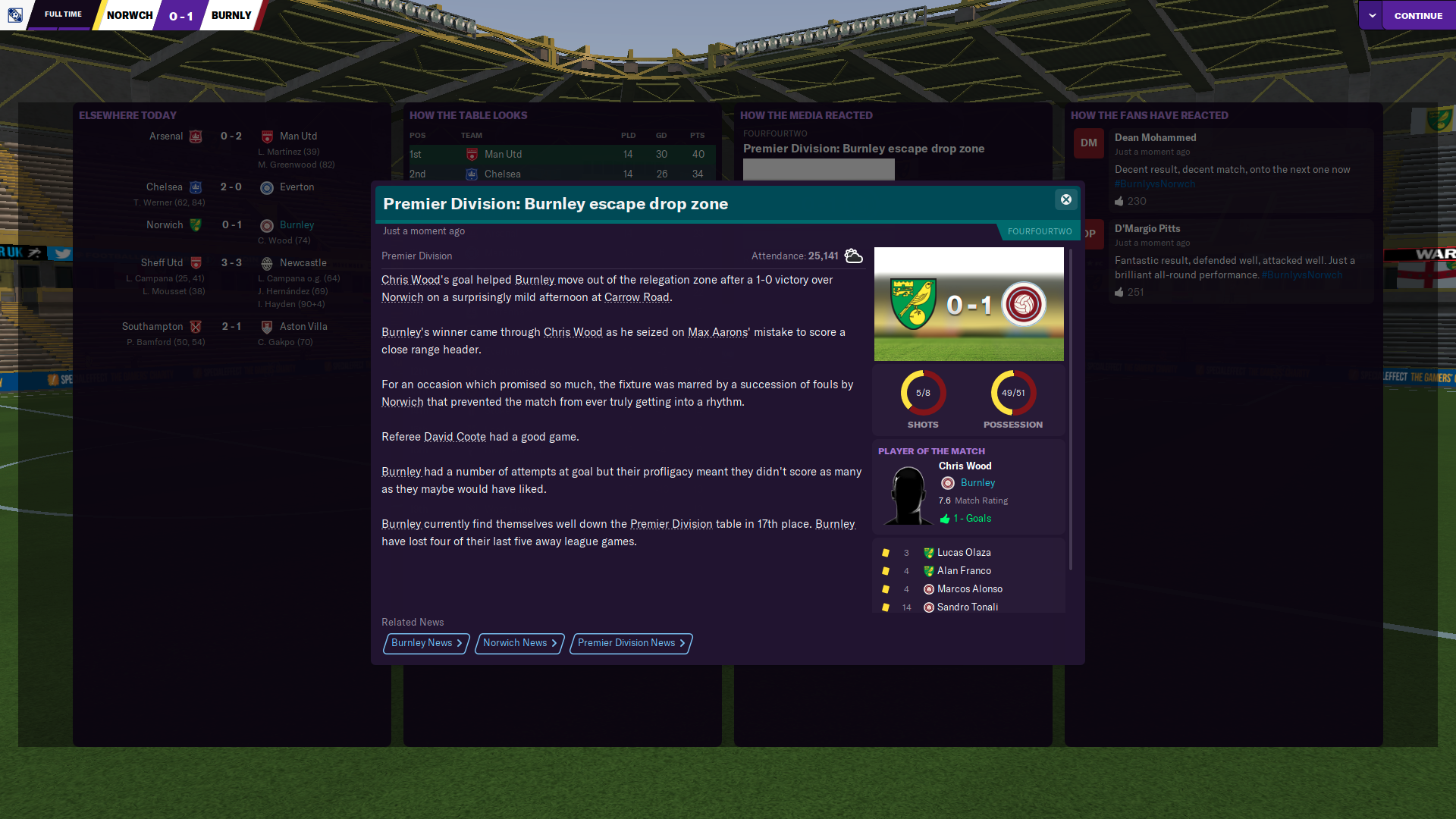 Anyway .... onto Rotheram in the cup.... potentially a good morale boosting victory and a good end to a bad 2 months !

Thanks for reading and the comments Gents !
Login to Quote

ScottT
1 year
Bit of a depressing update that. Thank god for Chris Wood. A very important result and hopefully a morale booster.
1
Login to Quote

Tell me about it...... Im hoping a mini revival and or a cup run can happen, as I dont think a top 8 is on the cards at the mo
Login to Quote

Harleygator
1 year
Not exactly a "revolution" at Burnley so far, but I'm enjoying the harsh truth of this one. A relegation battle might not be good for your heart, but it'll make for some great reading!
Login to Quote


I end December with a win thankfully in the cup Vs Rotherham - a 3-1 which looks pretty straight forward, it wasn't, we limp by them and only really secure things in the final minute, my Supersub does help me though 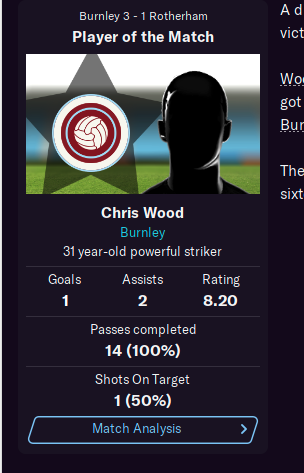 I then Draw V fellow strugglers Bournemouth - where we just can't seem to get any cohesion, my tinkering of tactics now may have to become an overhaul

A bit of respite though comes with another cup game Vs Wolves...... I last until the 85th minute - Then we concede and go on to lose on penalties.... I'm gutted, I really fancied this and I cancel the rest day and send everyone on a massive run out of pure spite. ... Not good with Man U two days later

This is rather telling, as Man U dry hump us 5-0

My reward for beating Rotherham is Ipswich in the FACUP - who are languishing in league two, the next Game after that is Stoke, where I NEED a win, so I rotate and just sneak by with a 1-0 setting up a 5th round tie Cs my cup nemesis - WEST HAM

The rotation is vindicated and we get by Stoke 2-1 with James Maddison bagging one, I hope his form is on the up.

We go to Chelsea in a better mood but after a 19th minute RED for Emi Buendia ,
Who seems to have channels Roy Keane for some bizarre reason
= 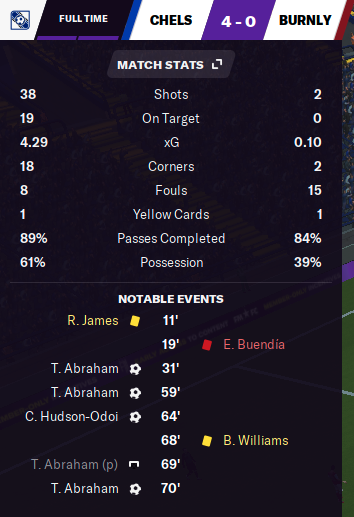 I get back home dejected, the mobile rings and this Bulls*it drops on my desk

Obvioulsly Nathan wants to go, so I say if 40 million comes in for him he can go, he moans, but I tell him, tough S*it, we are in this together and I bloody need you

In case this happens, I get looking for cover and try my luck again with Eric

He politely says no, but Jan looks like this when the dust settles, and I can just about muster a smile (Can I ? )

I look at the Feb fixtures and I reckon, if I can get these clowns back to form.... I could do a full month unbeaten hear and sort myself right out,.... fingers crossed !!!