TheLFCFan
1 year
Fair to say the last few months have been very tough and some sort of consistent form is much needed now. Some winnable games in February, time to get back into some real form.
Login to Quote

ManCityFan
1 year
Enjoyed this - it's a great read so far! It shows the difficulty in finding consistency with a team like Burnley rather than winning the league and Champions League within 2 seasons!
Love the overhaul of the squad, some amazing purchases there. Chris Wood still seems to be doing the business for you.

I have a good, active save with 1860 Munich at the minute but I'm inspired to start one with Burnley soon after this.
Login to Quote

ScottT
1 year
Christ. Quite the month ahead! A lot of six-pointers where a win is a must. The squad has the talent but is clearly lacking confidence. If you can string a couple of results together then, surely, Burnley have the ability to climb up the table.
1
Login to Quote

2021-01-30 20:48#281287 ManCityFan : Enjoyed this - it's a great read so far! It shows the difficulty in finding consistency with a team like Burnley rather than winning the league and Champions League within 2 seasons!
Love the overhaul of the squad, some amazing purchases there. Chris Wood still seems to be doing the business for you.

I have a good, active save with 1860 Munich at the minute but I'm inspired to start one with Burnley soon after this.

Thanks again for the reply.... im going to post the next update tomorrow evening. Thanks for the feedback, Yes, they are quite the problomatic buggers with consistency.... but ... thats what you get not being PSG or one of the big boys!!
Login to Quote

What a bloody month


The end of the Jan window finishes with Arsenal Recalling Emile Smith Rowe so I have a loan spot available, I have a mooch around and there's only really one decent-ish player who I think may bolster my midfield, Bizarrely he is a namesake of the Arsenal Youngster 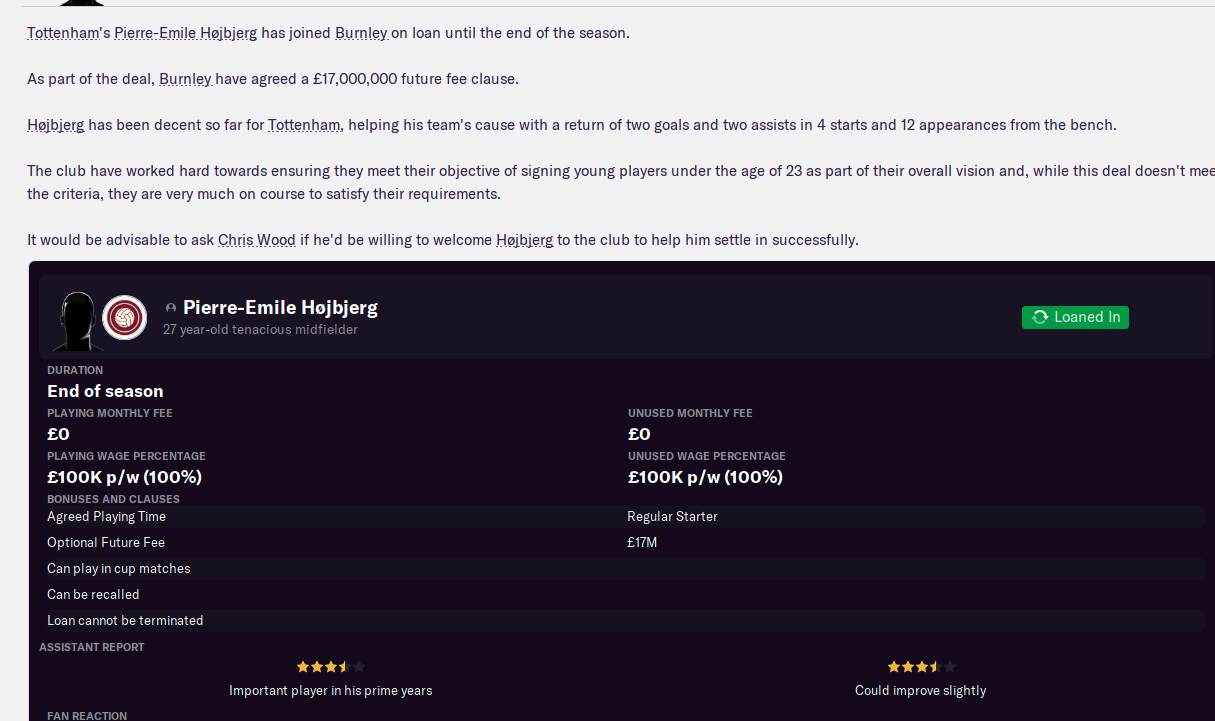 He comes in to supplement Tonali who from playing at the World Cup in every game looks more tired than this bloody lockdown!

Three great wins to get us underway

With the following scorers

The wins Vs Wolves and Southampton made more satisfying as Chris Wood is unavailable !

Im gutted but this momentum is starting to build, Nathan Ake has cheered up and then we set off to my Nemesis of West Ham

I don't know if its the Jellied Eels, James Cordon being a Fan, or their new stadium, but they derail me again ! This knocks on to Sheff Utd and Leeds ( who are playing well mind - and Im instantly knocked down a peg or two to 50% success, - 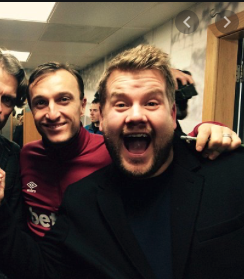 Then its another loss Vs Villa in a game which genuinely made me nearly throw the laptop out the window! 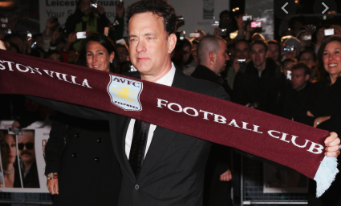 Ah, who am I kidding We were just awful

But I don't go in too hard on the players as the big one is coming up ,

We Start well, Chris Wood comes back in, but in the 7th minute, Alonso Scythes down Sebasten Haller, ( in the box) who promptly steps up, slots the Penalty and its 0-1

We go tit for tat and with me being aggressive on the tackling front, not a lot happens apart from 6 shared yellows cards until the 70th Minute Where "Dhaooooouuuud" levels it up with a lovely finish.

No please God no we need this - Please Ive suffered enough with late goals for three seasons...

The board summon me for the monthly review

I channel my inner homer

Thanks again folks ... Im just off to go take a long hard look at myself and maybe revert to a 6-3-1 in March to sort this mess out.
Login to Quote

ManCityFan
1 year
Unfortunate there mate. Started off the month so well as well! Looking at those fixtures, you must be due to come up against some of the 'bigger' teams as well?
Login to Quote

ScottT
1 year
Quite the drop-off in form towards the end of the month. Ouch.


March starts in an OK fashion, a draw V a good Leicester team, and then the lads treat me to a birthday win ! 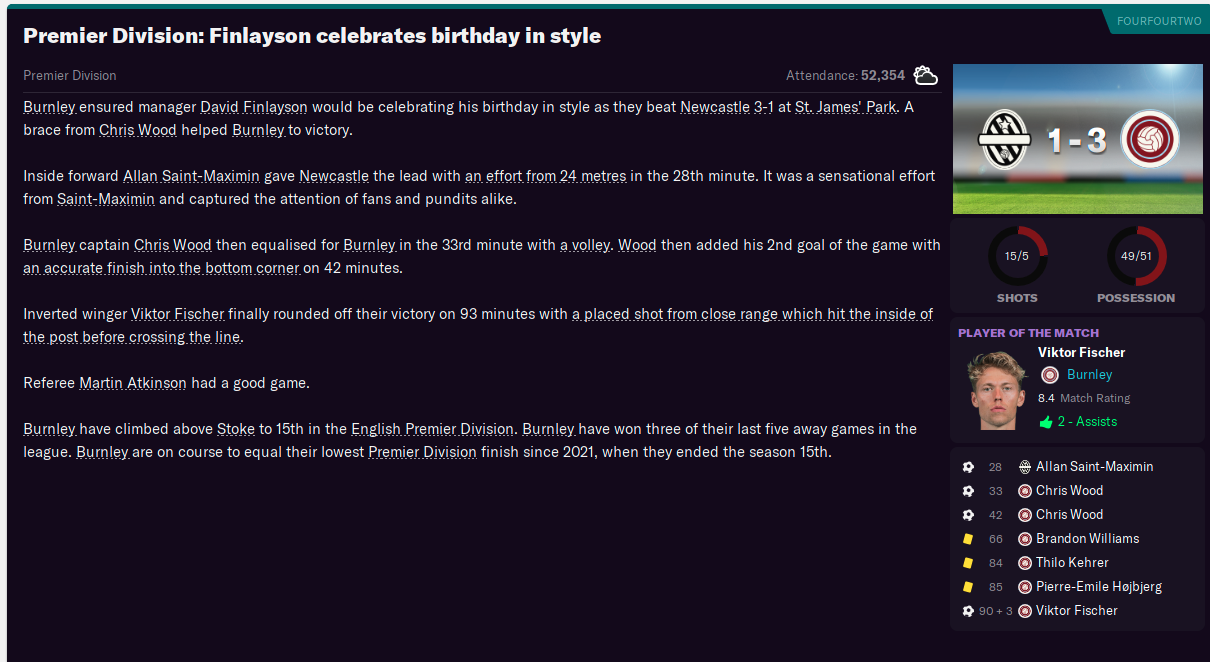 We play pretty well too - with Newcastle sitting below us, it was a must win!! 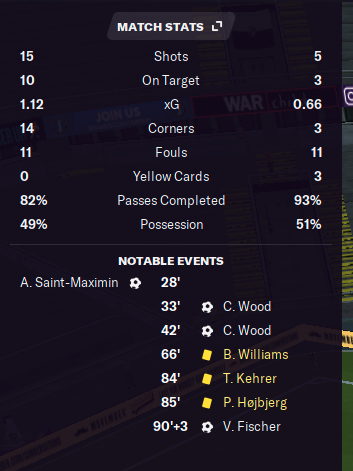 An expected loss to Arsenal , then the month finished with an unexpected point V Everton after playing some dreary stuff again gets me some points before a tricky looking April

You'll notice from the below though , we are still heavily relying on Mr Wood, Edouard
is not cutting it at the minute... Not ideal

with 5 to go - again like season one, Im back in a relegation battle, but thankfully play some of the teams around me in the last month so anything from hard games Vs Liverpool, Spurs and City is a bonus. First half of April pans out as I expect, with a sole Point Vs City my only crumb of comfort. ... and it was a last minute.com all out attack for that bloody one too!

If I draw its bad

If I lose its unthinkable


This battle is made a bit more difficult without James Maddison ...... who is not hitting anywhere near the heights I'd expected, I play him in centre Midfield, but he just doesn't seem to be working

We sneak past Norwich - and I mean sneak,.... Like you do on the way in to bed when you get back from the pub... ah the pub, remember those, as fond, but as distant a memory as signing Freddy Adu or Cherno samba - anyway ... .Back to Norwich - 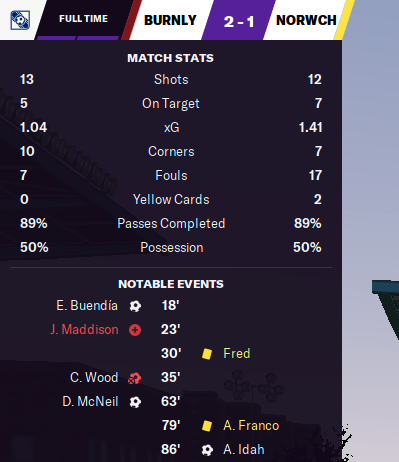 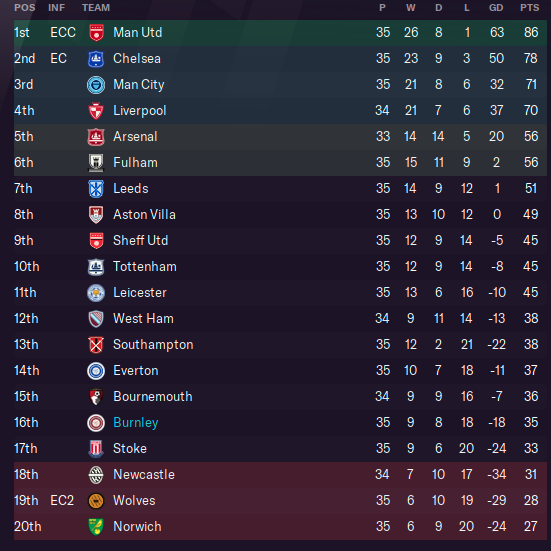 I lose V Southampton Meaning I need to beat either of Bournemouth or Stoke to have fate in my own hands.

I gee us up, take training and rev the full squad up, "We beat Bournemouth, we're safe, DO YOUR JOBS LADS" 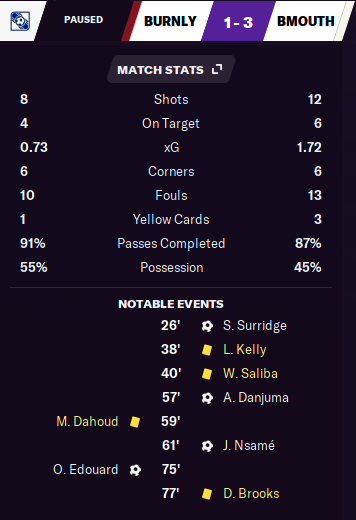 I give the team the silent treatment and cancel all training over the weekend and Monday, I can't face these clowns, there mugging me off, what can I do, thankfully results go in my favour and it works out its a straight shootout between us and Stoke

Rubbing salt into my wounds, Rovers are up.... aah this rate I won't be playing them next season either !!

We get back to training and I have a team meeting, - open forum, I ask the lads what can we do to survive, its my F*cking Job on the line here - everyone gets behind me,

Chris Wood however has been p*ss poor, So I'm going to entrust Edouard to save me, he has to show some fight and he wants to be here!!!

WOODY, - its up to you
Login to Quote

ManCityFan
1 year
On a knife edge mate. Winner takes all pretty much....who do Newcastle have?
Login to Quote

They have Bournemouth Away.... but Stoke is all im staring at. Thanks for the views and comments!!!
Login to Quote

ScottT
1 year
Can Chris Wood be the hero, again?!
Login to Quote


Here we go , the lads are buzzing in the changing room before the game, but I am a nervous wreck

Away Vs Stoke, ironically a very "Burnley-esque" team who will decide my fate.

Although the board may think differently ....

I put that to one side and as the lads leave for kick off I shake their hands individually and let them go out to have a minute to myself.

I am barely 23 Seconds into that minute when there a faint wave of noise I hear. - "streaker" I assumed, and potter down to hopefully see a more decent sight than my league position....

Christ it was a goal

Double Christ - its was FOR us !

This settles us down and after a scrappy corner in the 6th minute Nathan Ake - my want away captain, centre half, Mr. fantastic bundles one in - I'm 2-0 up after nine minutes ! 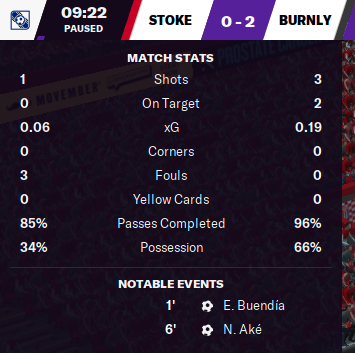 I decide to "Encourage" Keep everything the same and See how things go.. They go Well until the 35th minute until Stoke pull one back, we get to half time with a slender 2-1 lead. I change very little as my charges are playing well, a bit of fist pumping goes on and then I send them out.

I immediately demand more from everyone with calamitous effects.

We're down if nothing changes....

I pick cup the tempo but Stoke are just playing counter attack now, really compressed, giving me no options.

I cast my eye up to the directors, some of whom look like they are already on the phone to Alan Curbishley or Martin O neil for next year.

85 mins pass, Stoke start doing for time wasting and I lose my rag and berate the team, tell everyone to "tackle harder" and begin a managerial meltdown, one fella amongst my 11 looks cool calm and....


I have one last through of the dice, go all out attack, throw the kitchen sink at Stoke. and in the 88th minute.... he..

Into the the onion sack

I give you. Mr Christopher Wood 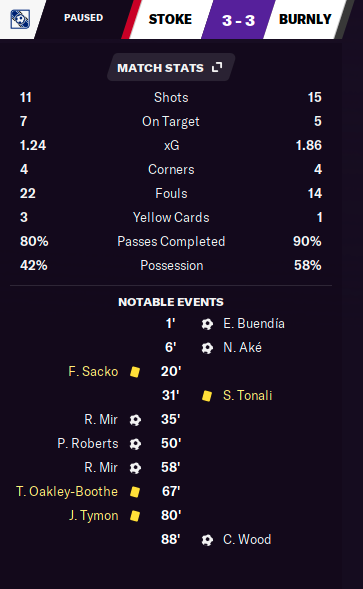 End of season review next, and it won't make for pleasant reading !
Login to Quote

Harleygator
1 year
Wow, nail biting stuff! Really great to read that, and I'm glad you survived. Need to do much better next year, however that happens - can't really call it a "revolution" if you're hanging on against the drop! Good luck!
1
Login to Quote

Thanks Harleygator. I know.... i did not see things panning out this way... I darent go on the next page as I still might be for the chop off the board!!
Login to Quote

ScottT
1 year
To the rescue again. The man is more than a superhero for you.
Login to Quote