Leicester are first up, and we only take a 1-1 ... not ideal - would have like 3 points at home before two away games

However the first away goes well, a 0-1 V Crystal Palace

Then we get a draw at West Ham and finish the month with the Derby Vs Blackburn who are stone dead last.

They make me work real hard for the result, but nevertheless a 2-1 makes everyone happy !!

The results and scorers are as such:

I can't help but be pleased although I know there should be at least three more points on the board, 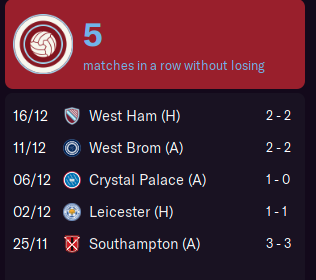 Especially with the woodwork and the late goal at West Brom 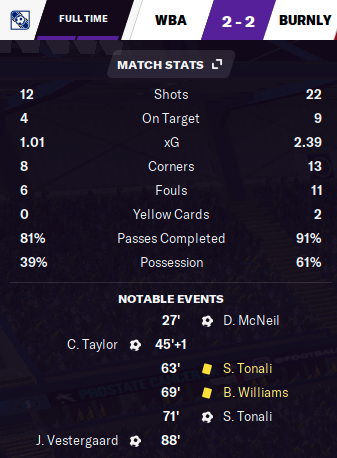 Sandro Tonali is impressive in the month and with Jan approaching ... Real Madrid pick up the blower...

and then in the realms of pantomime season, oh no it doesn't ..... 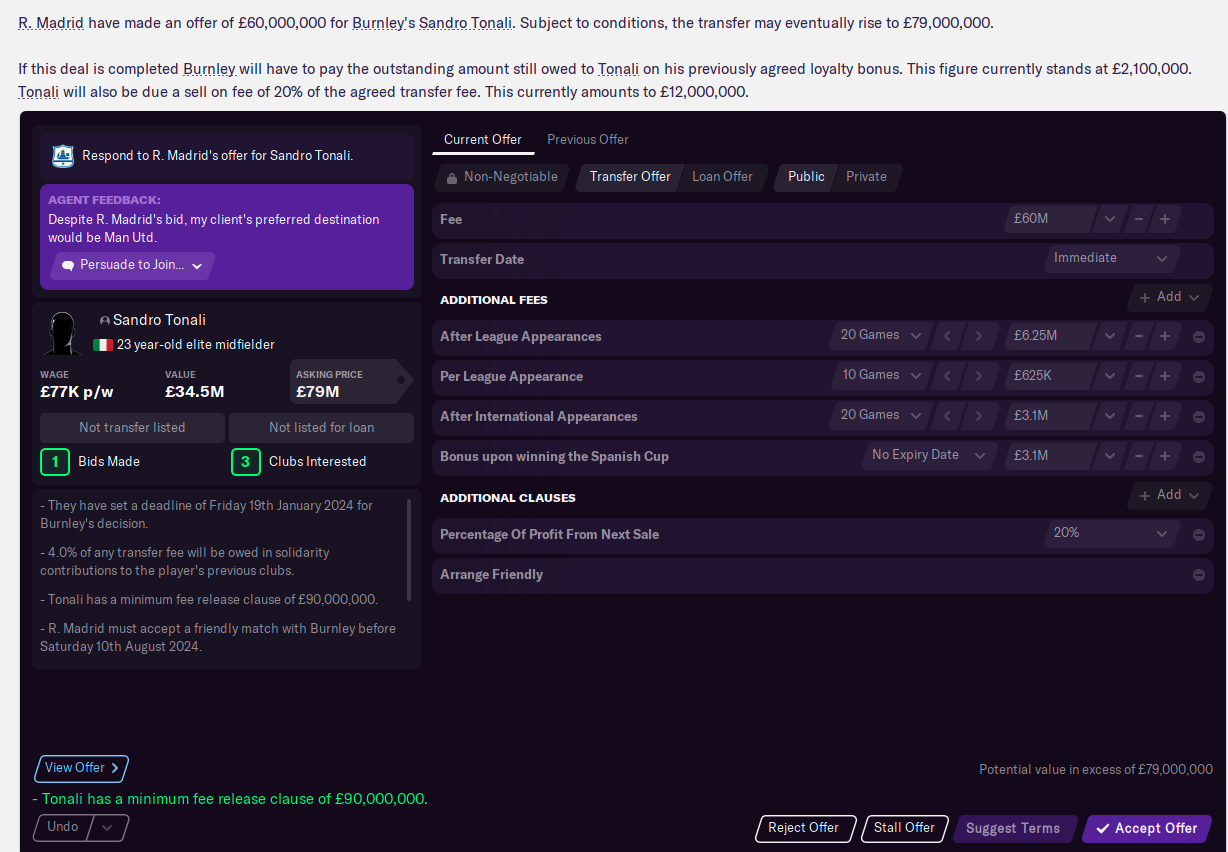 I stall the offer and immediately start panicking ....

Bloody rubbish... but a cup run would go down a treat !

Were half way through the year snd things don't look too bad... can't see a European push this year but ... you never know ! 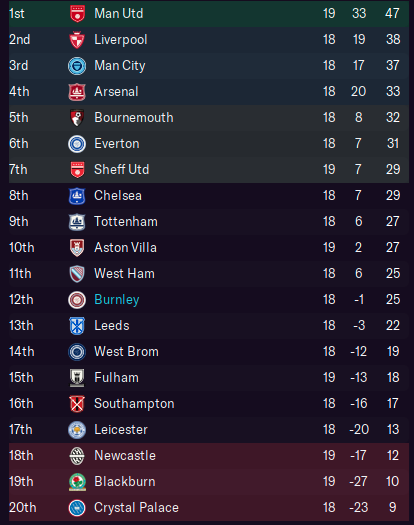 Next update will be transfer silly season as the big dogs are circling Turf Moor.... looking for Bargains, Ive lost Maddison, I don't want to lose anymore !

Thanks for the comments all.
Login to Quote

ScottT
1 year
Christ, you have a real conundrum now. Looking forward to seeing how this pans out!
Login to Quote

TheLFCFan
1 year
Well a much improved season here compared to last and with a bit more luck you'd be on for a real push at Europe. The improvement has been seen though and it's going to be a big January window I feel.
1
Login to Quote

FmTib
1 year
Enjoyed reading this, been a roller coaster of emotions. Have to get a grip on squad, talented bunch not performing well together but hopefully push on
1
Login to Quote


A New Years Day rollercoaster Starts 2024 - Man City beating me 3-2 which isn't too disheartening and then I had my triumph V Pompey before tricky games V Everton, Spurs and Fulham.

But the main issue are my big guns being fished for

All under offers from big clubs - unfortunately Umtitl had a promise around me strengthening ... I bring in Oxlade Chamberlin and Buendia on loan in to replace Maddison, which I think will pacify him, but it doesn't.... and I have to subsequently cash in on him but 25 million for a free, is not a bad return and I bring Mario Hermoso in, whose stats just about are on a par with the departing Umtiti 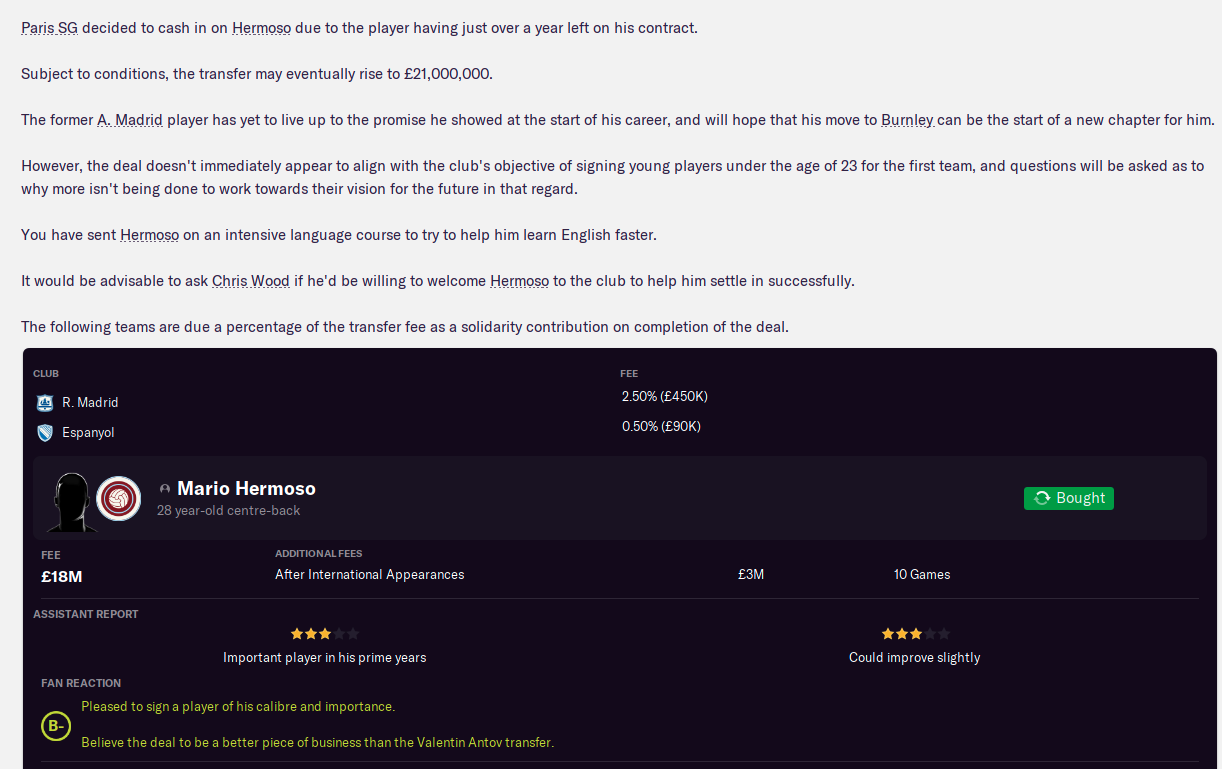 My ins and outs don't look too bad - and I'd like to think we've come out, unscathed and with a profit. Tonali and Ake staying is massive
Ins

This all happens in and around my three games and I only get a solitary point from Fulham which doesn't exactly thrill my new signings.

I play really well and thump Sheff Utd 4-1,then sneak past Wolves in the cup. unfortunately my reward is Man Utd away. 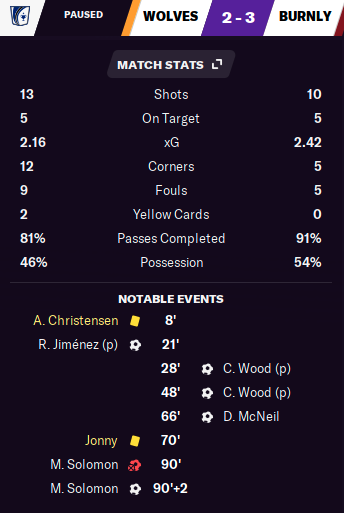 Then we get past Bournemouth playing well, but only getting a 1-0 is less than I deserve.

The press get back on the Finlayson ball bandwagon - im just glad to string 3 wins together !

The month ends well with John McGinn coming into his own a bit, chipping in a few goals and he's now valued at 15 million from 5, I feel my decision to sign him is now working !

Off to Feb.... I think we've survived the window well.
Login to Quote 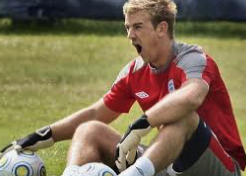 One of the high/lowlights is a 0-0 draw V Newcastle where I get a 0-0 but it should have been a loss, an 86th Minute VAR decision saves me, but Tammy Abraham is injured so I have to dust off Gareth Bale to fill a bench spot now Chris Wood is thrust back into his Centre forward birth. 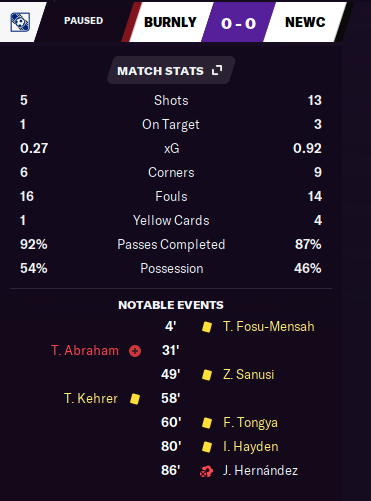 But literally that's about it for a month... A selection of traffic light results, Loss Win Draw .... Then I play my first of two games Vs Man Utd within a week.

The month starts well, in the selfish sense I get a new contract 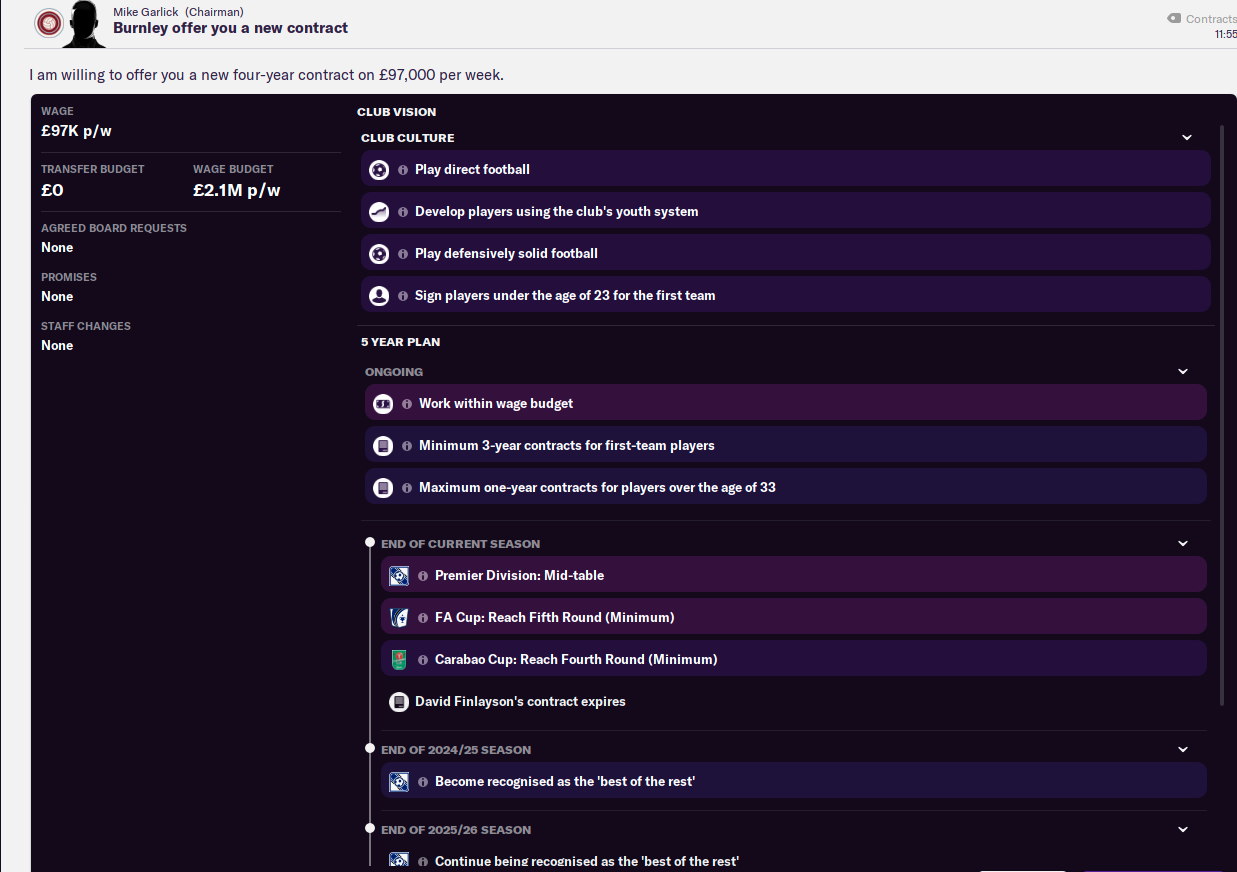 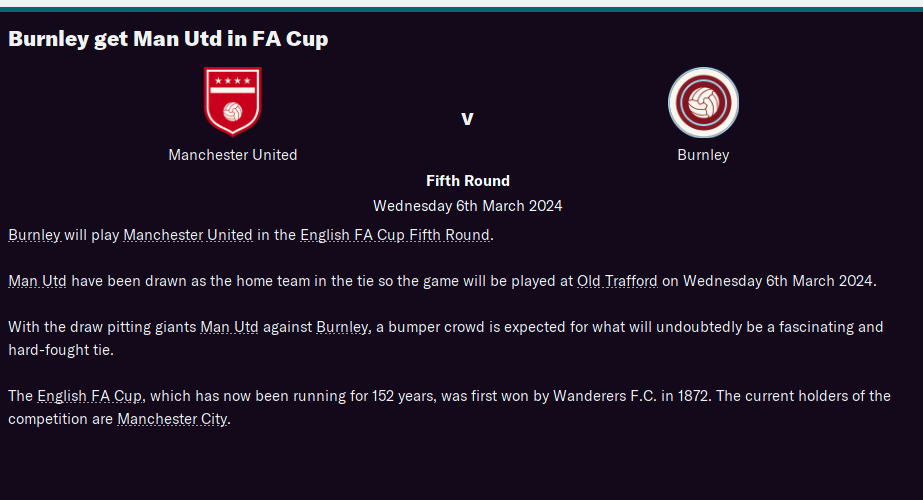 Unfortunately my FA Cup run is now over, Man Utd dispatch us 3-1 which is compounded by an injury to Victor Fischer.... He keeps getting these 8 week injuries and if they continue... his time might be up.

A massive humping V Chelsea doesn't help, but an unlikely point picked up V Liverpool means the month isn't a complete write off!

Results and scorers as follows:

Thanks for reading .... hopefully wrap the season up over the remainder of the weekend ! !
Login to Quote

TheLFCFan
1 year
A tough March but congratulations on the new contract! A much different feeling from the last year.
Login to Quote

ScottT
1 year
I agree with TheLFCFan. The club are in a much-better position than they were this time last year so to potentially eyeing-up a top ten finish is pleasing.
Login to Quote

We start at home V Southampton - who have Liam Delap on loan, - who looks a decent player... he does prove this by bagging an 8th minute goal at putting me up against it.

However, the ever improving John McGinn gets me back on level terms and then Emi Buendia proves his quality on his return from injury and gets us a 2-1 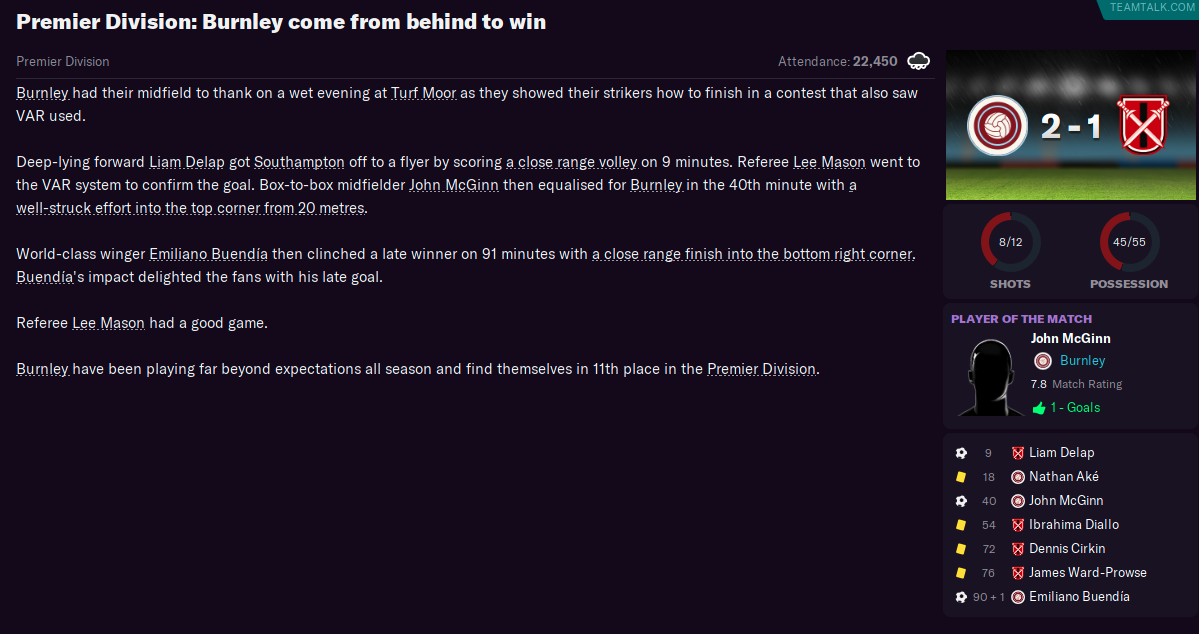 This good win is followed by arguably the hardest game of the month V Leicester - again John McGinn bags me a goal from centre midfield and a draw is a fair reflection of the full game.

I have a quick look at McGinns stats again and he's proven well worth his 5 million, if anyone is after a box to box midfielder on a budget, McGinn is your man ! ( although he's a long way from getting to Chris Woods stature !

He's channeling his inner Roy Keane in the tunnel

He leaves us with an hour to play and Palace battle and push for a winner but our defence stands strong... however, this comes at a cost ...

Three Centre halfs down.... and bloody WEST HAM AWAY next... I have a bad feeling about this ...

3-0 and im lucky to get nill! - I have my cents midfielder at centre half and its just a car crash...

The month ends as follows..

( for one minute i look at using a knap tactic or "cheat" to get the best scouts or players, but Im going to stick to my guns and use my brain) 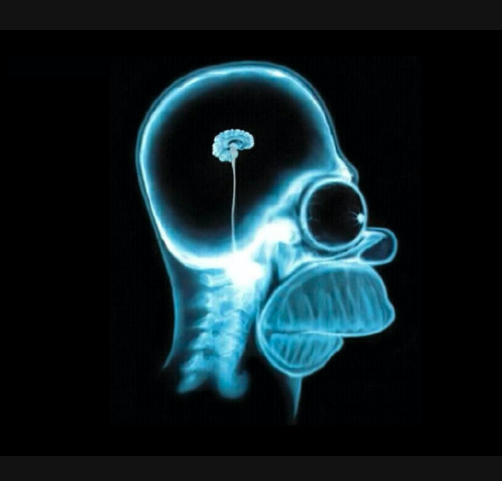 ScottT
1 year
Always next season to have a great season...

Was it worth the wait


A belated update, so apologies to all - Damn COVID and my actual job getting in the bloody way !

Mays fixtures looks like a mixed bag, but with 3 wins I think i could bread the top half (other results permitting 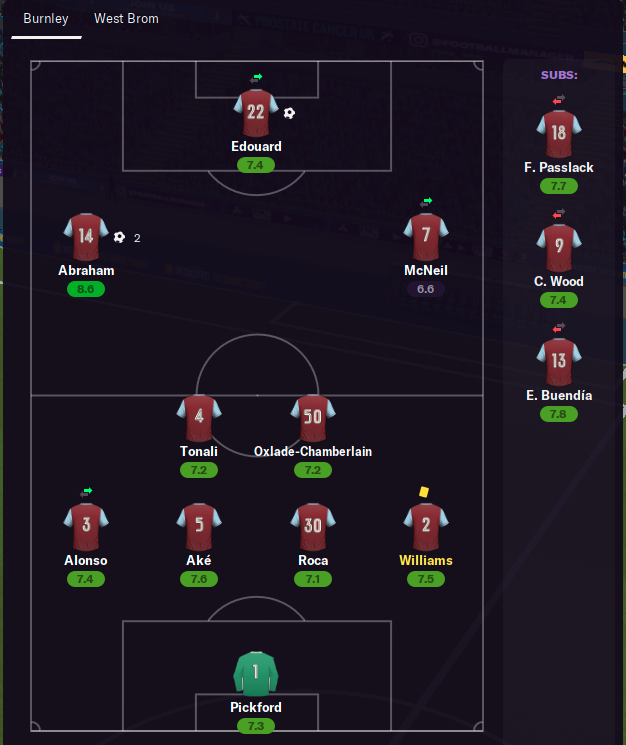 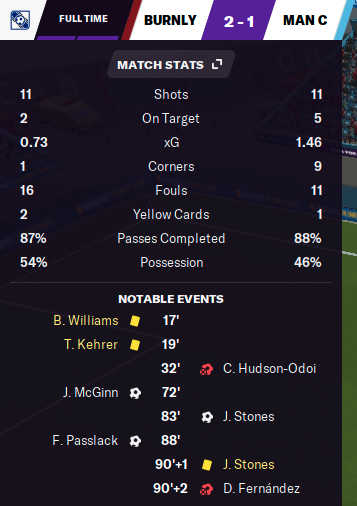 The fact they had played in Europe 2 days before has nothing to do with it - Honest ! 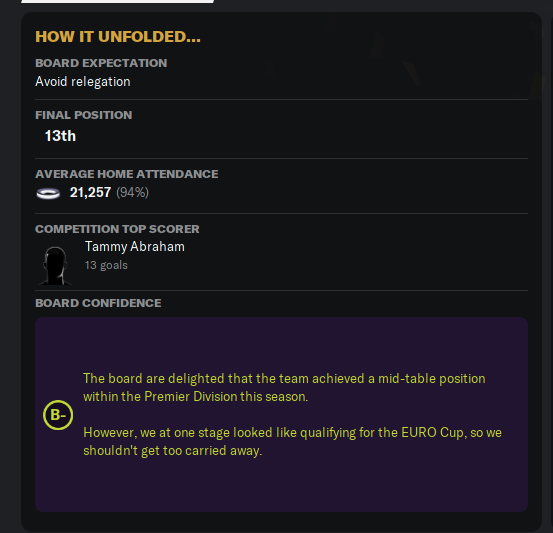 I make a bit of cash and some of my signings hit the mark - Im going to have to vet the squad again and have another clearcut again - its getting worse than John Lewis and Debenhams with this lot ! 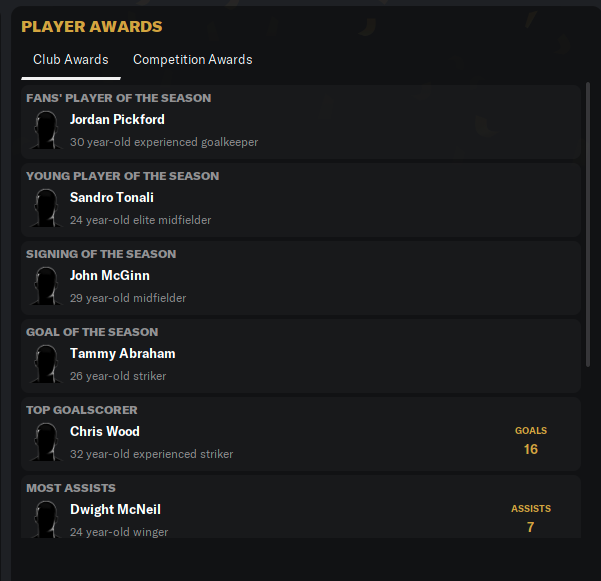 Onto the end of season break I go - but the overhaul is about to begin - 5th season coming up - and I feel this may be my final one if I can't break into Europe or at least bloody win something !
Login to Quote

Some big time charlies are getting the axe - some fringe-is players are off and Im going for quality and enthusiasm.

The board don't give me much - only 30 million in the coffers, but I think i can offset that with some wages saved off the flops and balance the books with some sales to get some in .

I act swiftly and get rid of Thiago - who half did a job but unfortunately was nowhere near good enough - but hey ho - he was an easy decision.

Less so was Mohamed Dahoud. played 4 good seasons for me, got me out of the crap in season 1 but never really got to those heady heights again. He goes with good feelings, and I get a decent fee for him - I put in the return clause too at 20 million so if i ever need him again - he's there.

So that's my immediate outgoings

Brandon Williams 4 year loan spell( i know - ridiculous) is now at an end - Ive missed a bit of a trick really - as he's gone to Celtic on a free - so I need a new left back/right back.
Alonso was much poorer last year and I thin chess another one on big wages not warranting them - his great loan season again was not a view of things to come.

I nail my first two signings - I really think I have 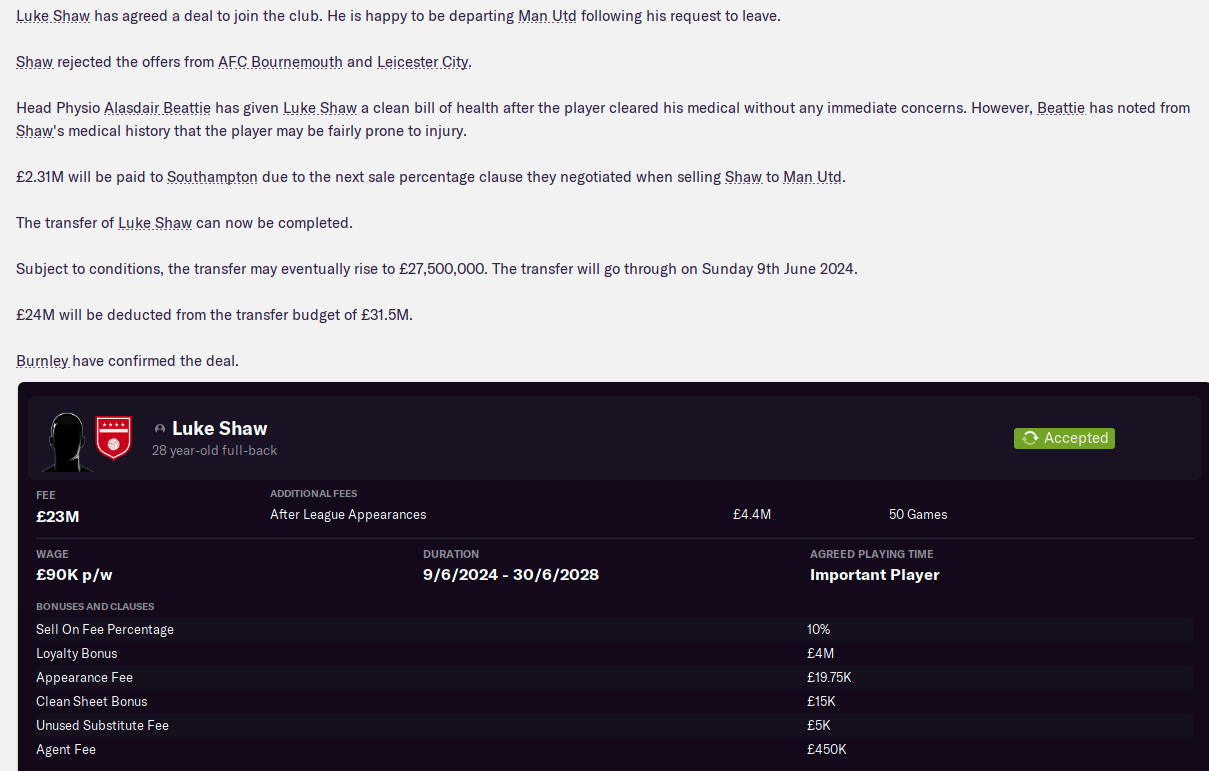 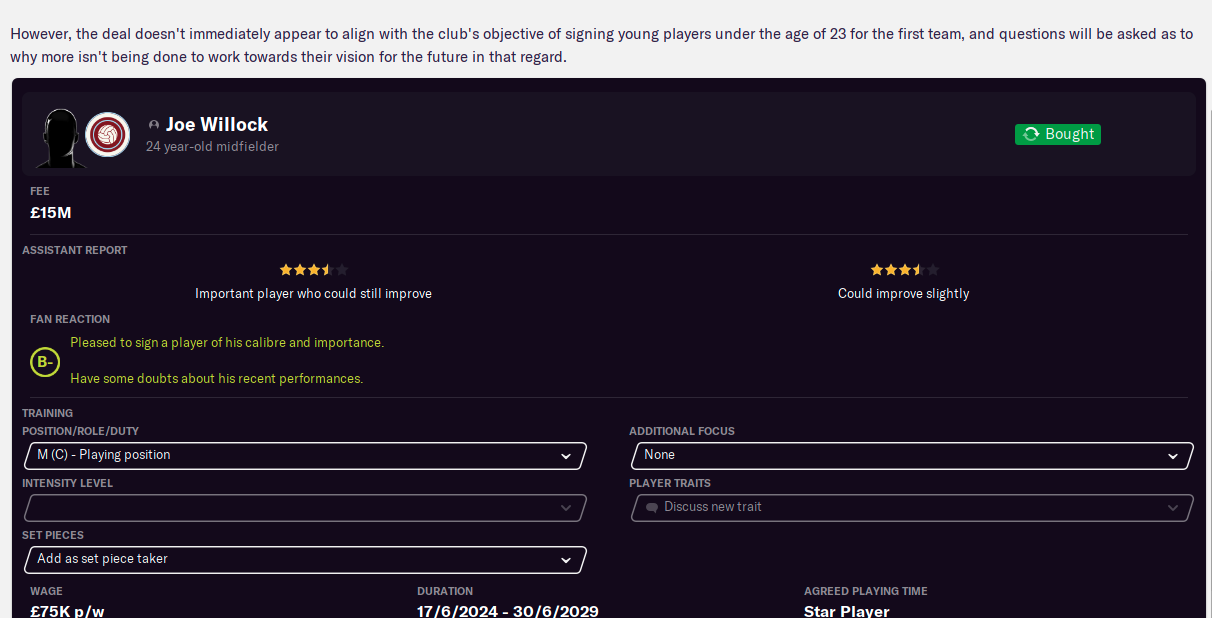 July begins in frantic fashion - City in for Tonali and I get a huge 18 million profit on Passalack who was ok for free and i sell for 30 million.

Then some more big time Charlies leave in Mahrez and Alonso, - Mahrez unfortunately was a flop a bit like Thiago

I think Sessegnon has the potential to be brilliant too. 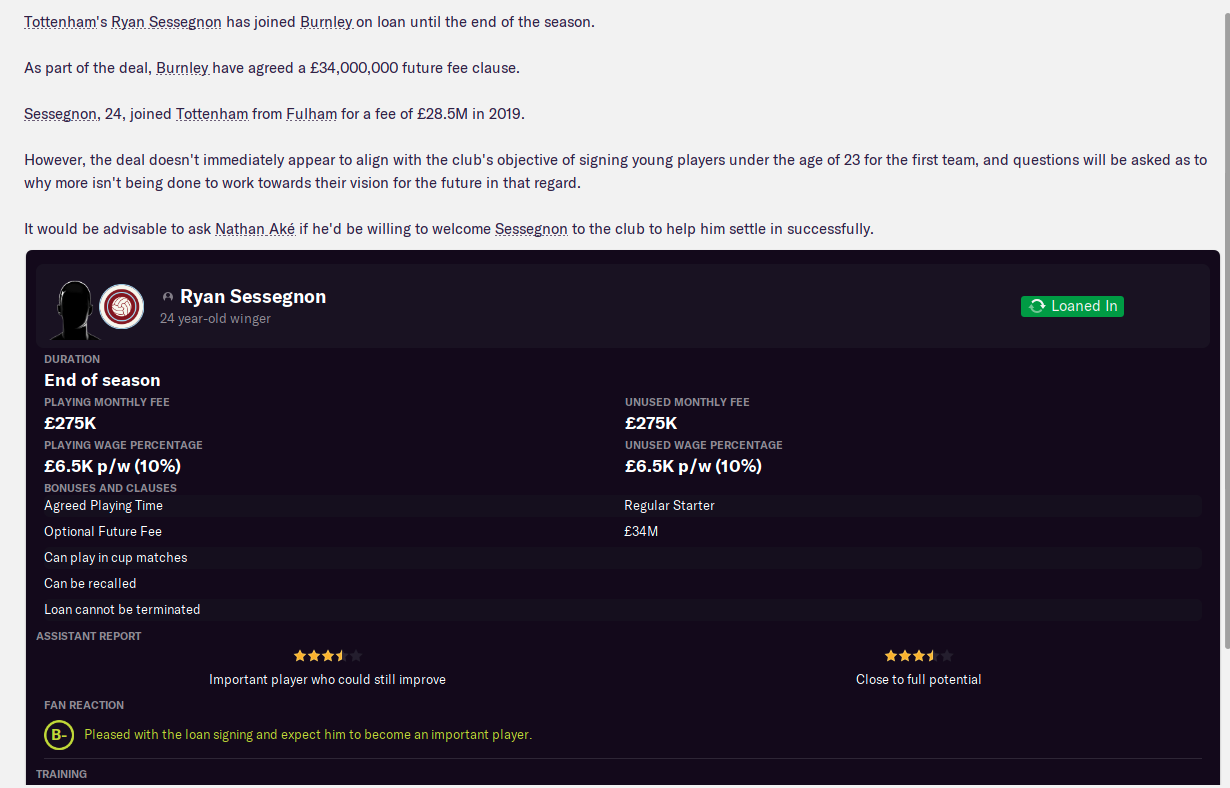 Then Sheff Utd begin test my nerve for Nathan Ake 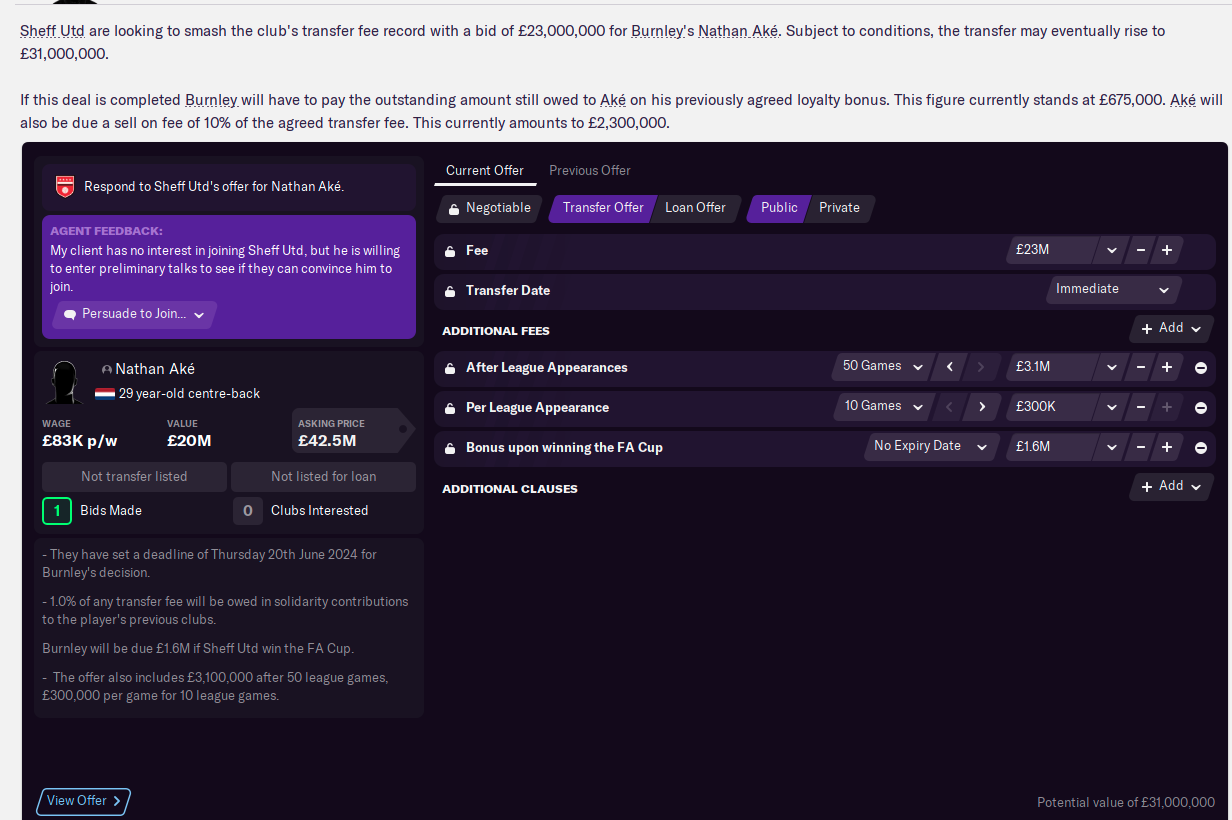 I must keep him and Tonali to build my spine around !

Thankfully so far I am!

Onto pre season
Login to Quote

TheLFCFan
1 year
Some good movement in the window so far. A shame some didn't work out as hoped but they are bound to happen. Time to build a team ready to push Europe!
Login to Quote