MidKnightDreary
11 months
Gonna have to name your child after him at this rate!
1
Login to Quote

ManCityFan
11 months
Excellent! The main man himself keeping you up, hopefully in a job also!! Didn't expect that after going 2-0 up inside 8 minutes but all ended well!
I look forward to seeing your transfer window business
1


Phew - Even as the dust settles on the season I know planning must begin for next season - my 4th at the helm for Burnley.

I look at my team to see where I can strengthen and decide on nothing too drastic, maybe a couple more leader style players, possible a forward's if Lord Wood loses form again, but looking at them that is easily a top half team ?! 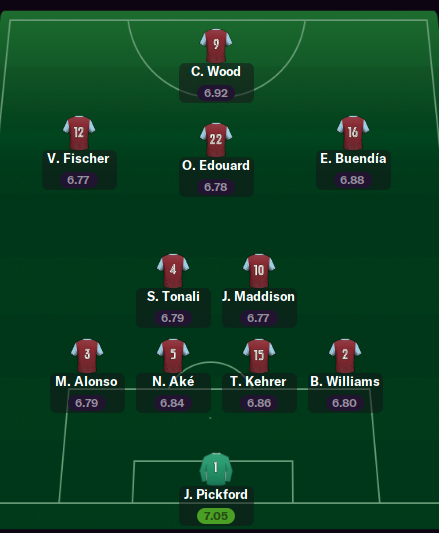 I know I have to survive the board though, and no sooner do I send the lads on their end of season break than I get shepherds crooked into the office ... is this the end


No thankfully not, Although, they want me to commit to a points total after 5 games before I've even seen the fixtures !!

I gamble and plead my case to a reduced figure in case I get some (more) horrific luck.Thankfully they see sense, and 6 points out of 5 games should be doable !

They do however cut my pursestrings like some posh daddy on a GAP year student and my budgets don't look too favourable so I am again going to resort to the bargain bin.

I stupidly played Gareth bale 1 too many times to trigger his 2nd year on his contract which slaps me with 135k a week.... so I think he'll have to go, hopefully someone in Ch-ina ( say it like Trump, you know you want to) will fancy him.

below are the summary images of the year, like I said not pleasant reading, I think next year it will be a tactic overhaul more than a squad overhaul - control possession hasn't worked.... but I do like a strong middle, maybe tiki taka... depend ing on who comes in - and more importantly who i don't lose ! 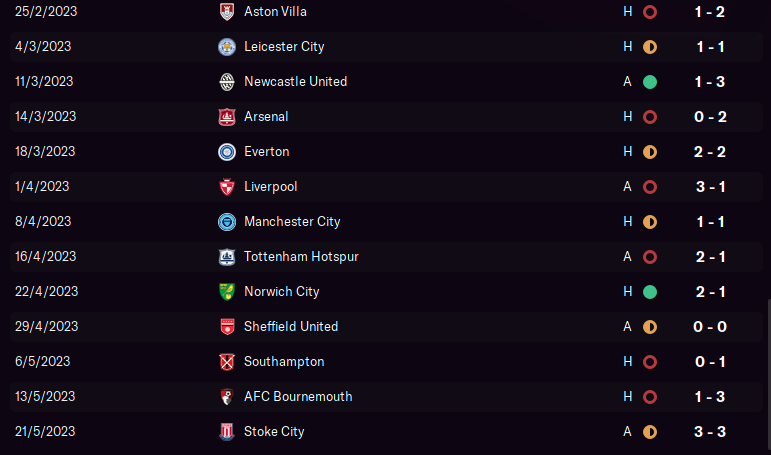 ScottT
11 months
Nice to see the board supporting you! Six points should be attainable nevertheless.
Login to Quote

TheLFCFan
11 months
A tough tough season after a couple impressive years, but survival and still in a job. Need to really hit the ground running going into the new season and get morale back up around the club. A big year ahead.
Login to Quote

Nickman69
11 months
Enjoyable read mate, hopefully you can find the magic formula to turn things around, a few tactical tweaks would probably be all it takes as you have a lot of quality.

I've had more success with Edouard as an IF on the left, if you re-train him there and give him some games on the left he will turn in to a beast.
1
Login to Quote


Before Our pre season gets underway there a million and one jobs to sort, youth contracts staff contracts etc, and after the eason Ive had - I can't take this s*it

Overmars comes in to sort that lot out.

I then go on a bit of a purge on getting some deadwood out, notably,Jack Wilshire leaves. He served his purpose at the start, but now hits time is up

I then indulge with a couple of good freebies, bolstering my set piece options, adding leadership, and some proven winners. 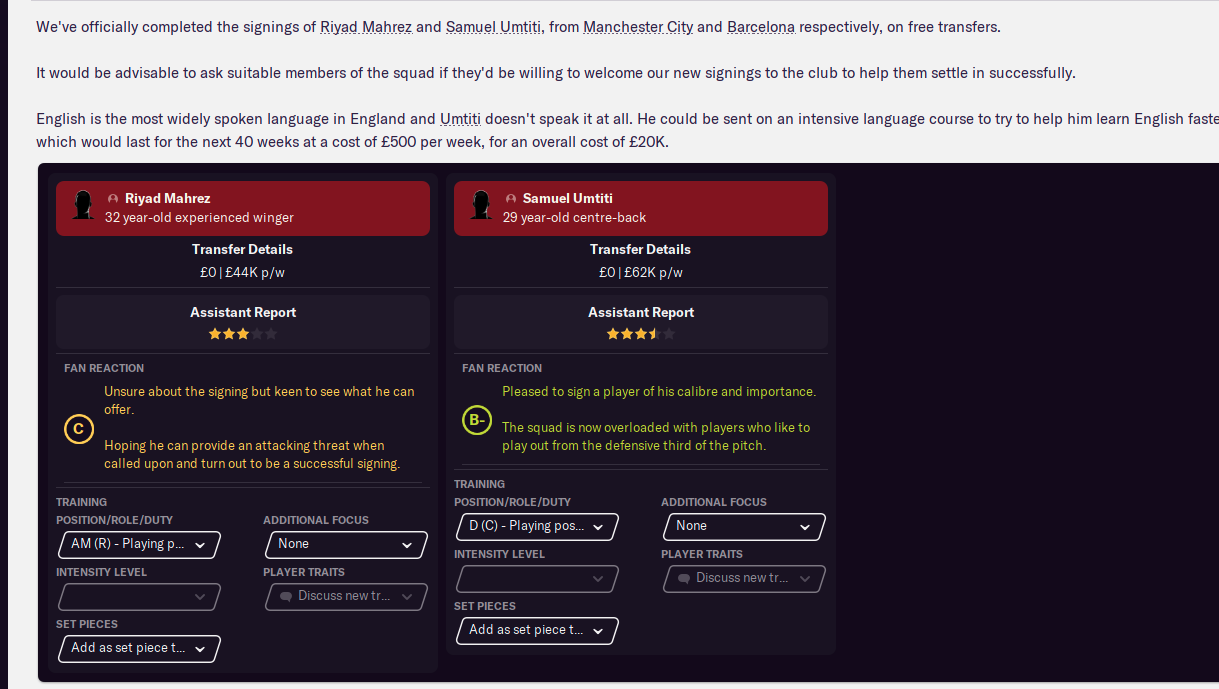 Due to having some fund age issues, I indulge in the loan market after trying to no avail to get Robert Lewendowski as a freebie.

Im going to indulge @nickman69 and get Edouard on the inside forward trail so need a supplementary striker for Chris Wood. 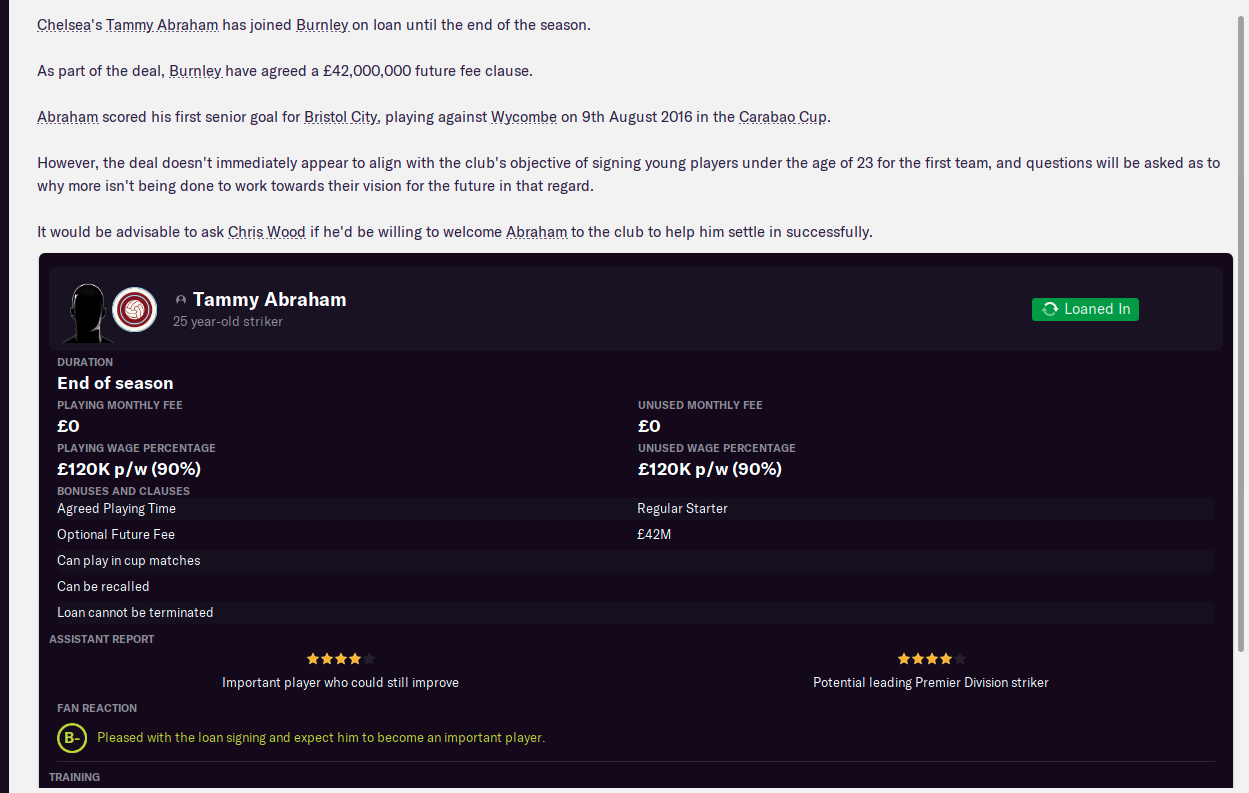 Im then pretty content as pre season starts, but I do a player search on work rate skill technique etc to see what comes up after Spurs test my nerve on Sandro Tonali in case I need a replacement

I ask how much they want for him

I immediately offer a good contract and ...

I KNOW THE SUSPENSE IS KILLING YOU

Granted they are all around the 30 mark, but... but I need a good season ... and I need it now.
I do bring in Ethan Ampadu for a decent fee and immediately get him out on loan as he could be a longer term replacement for James Tarkowski 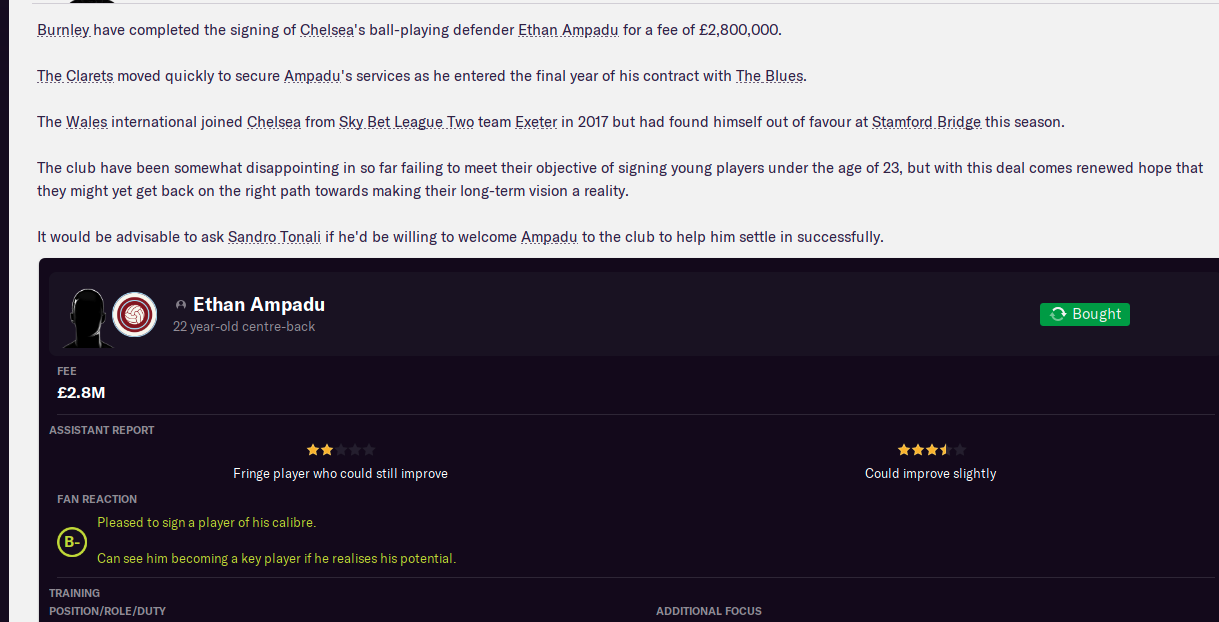 Then the fixtures come out and to be frank.... If i do get 6points out of this I need sacking!

I go into pre season quietly confident... although I did that last year !!

I cancel the trip to Singapore and send the lads up the lake district. .. we don't deserve it after last year.

Fuelled by Kendal mint cake and fresh air... I think we're in for a blinder in season 4 !
Login to Quote

ScottT
11 months
Some talented and experienced players brought into the club. Perhaps this is the formula that may lead to an improved season after the difficulties of last season?
1
Login to Quote

Stavros13
11 months
This has been so great to follow! I’m a massive Burnley fan and have always struggled with them in FM! This has given me great ideas to have a crack. Can’t wait to see how your next season pans out!
Login to Quote


I hate pre season, but it always serves a purpose in getting everyone fit,

Edouard is training as inside forward and only time will tell if its worth it - he's not best please but he needs to start living up to his price tag. 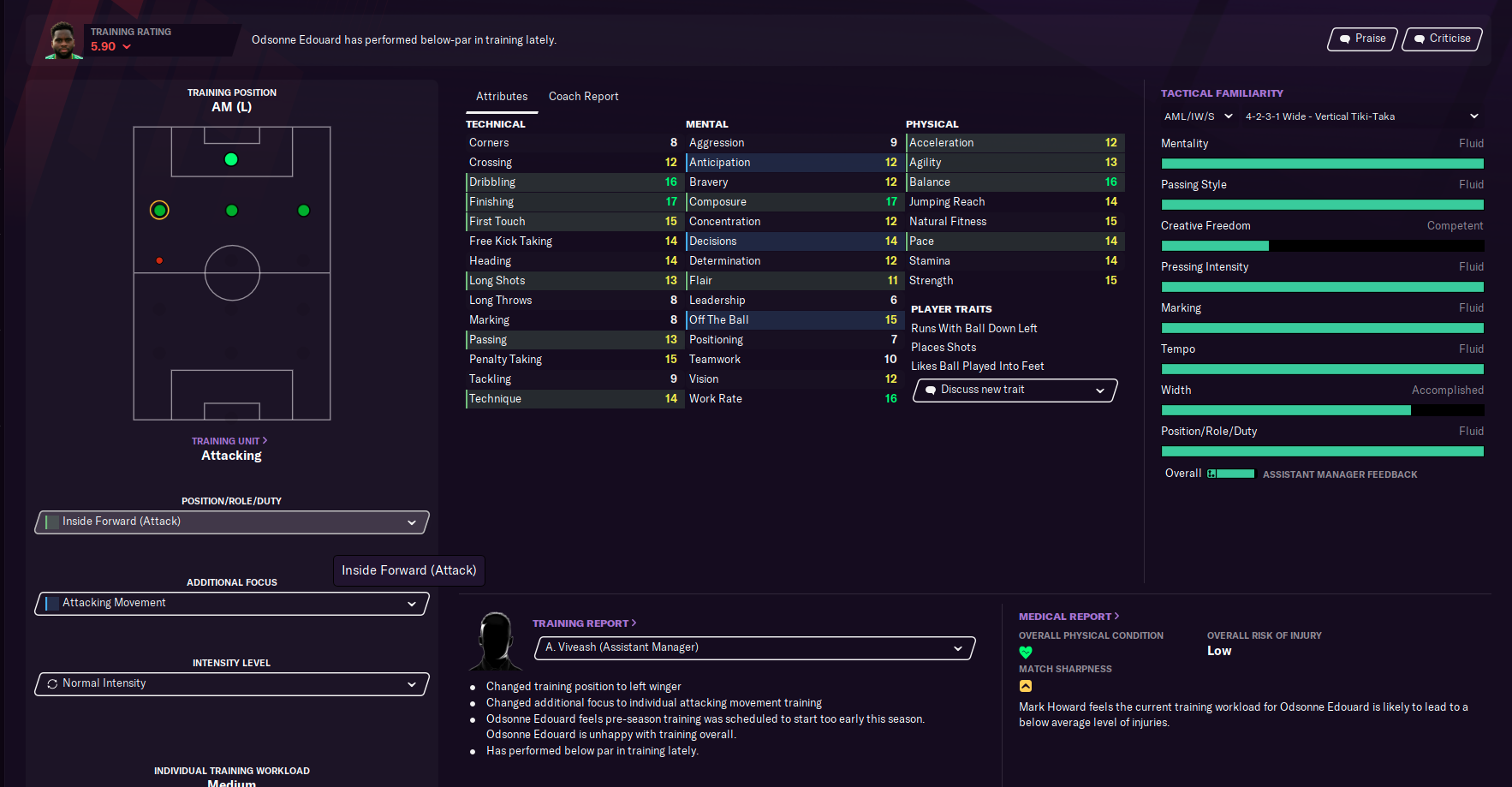 John McGinn is on the transfer list and for some reason I've always liked him. his stats prove he is slightly better than Mohamed Dahoud and I end up going for him, selling Dahoud and pocketing a nice 6million profit. 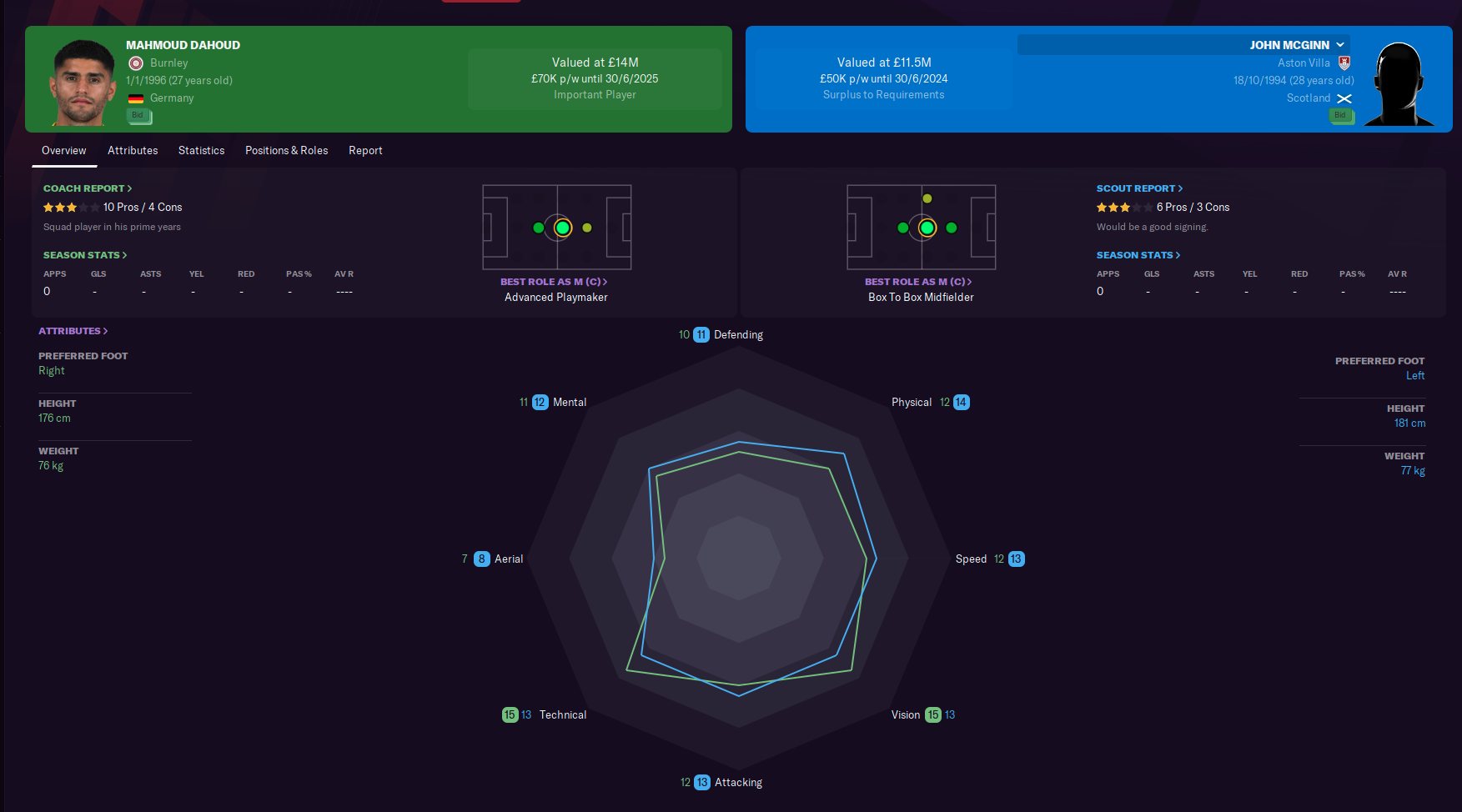 The squad going into my first game Vs Fulham looks well ... 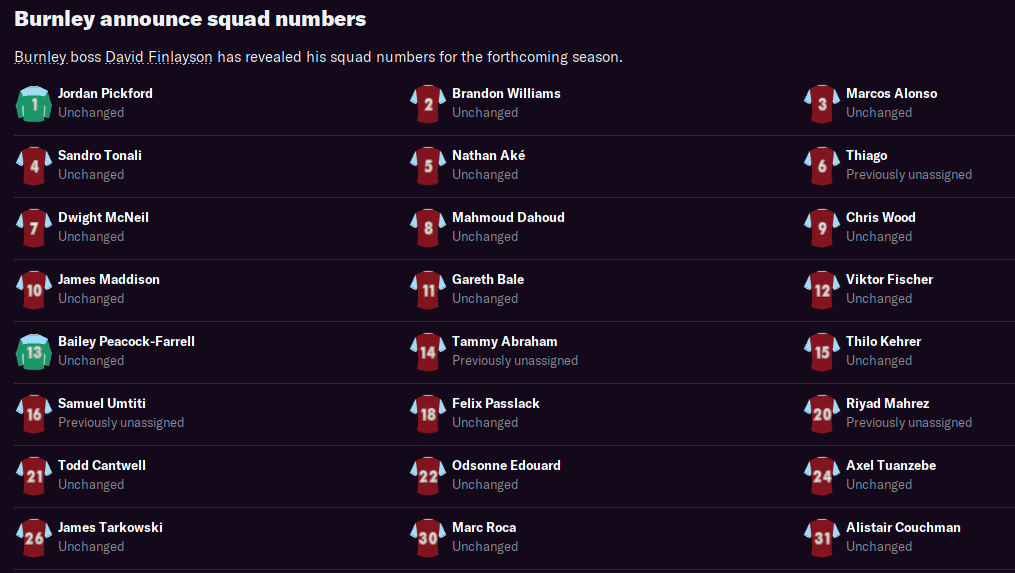 I start well, a feisty win V Fulham a lucky Draw Vs Everton and a half expected loss to Spurs get me four of my six points required to save my job!

I then promptly dispatch Oldham in the cup before two big games V Sheff Utd and Bournemouth.

Then a 1-1 draw with Sheff Utd means I need a draw minimum V Bournemouth.
I feel comfortable...

I should not have

Look where they are!!

The night before the game I can't sleep

We go in with a bit of confidence, Chris wood starts over Abraham as I know he knows I need him.... 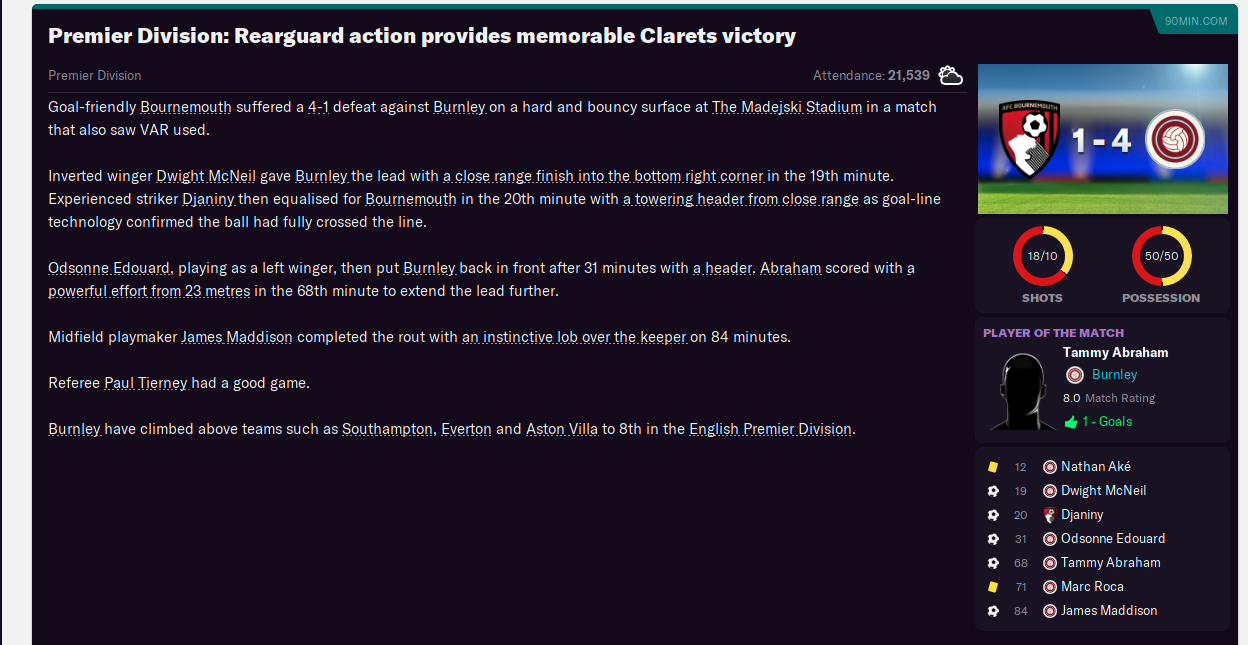 the board let me know, I breathe a huge sigh of relief

then focus on Leeds at home, Chelsea in the cup and an always tricky tie Vs the Villa

Thanks for reading !
Login to Quote

ScottT
11 months
An important win to save your job! A decent start to the season all things considered to. Maybe the ultimatum helped to improve your performances?
Login to Quote

Then we go to Chelsea in the cup, where I am expecting very little ...

After 8 minutes However Vicktor Fischer ( regaining match fitness) puts me 1-0 up!

Chris wood and his shovel dig me out of another hole......

But unfortunately the new series of "The Burnley Late Goals Club" kicks in and a 94th minute goal does me. We draw Vs Villa - but I don't know how, we batter them .... absolutely batter them - like full on whip them.

We also hit the trinity of both posts and the bar too!! The press seem to take great pleasure in telling me aswell!!

September is unbeaten (cup aside) so I can't complain, I would love to have turned the Villa draw to a win though.... but I'm 10th which is exactly what I was hoping, the tactic seems to be working so do the signings !

Tonali Has been my lynchpin and the main vertebrae of a spine which seems a lot more rigid than last year !! 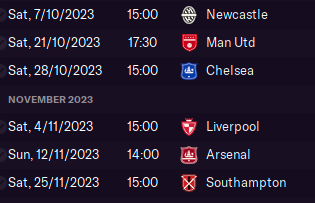 Anyway we play newcastle before an international break and Id love a win before the lads all disappear...

And they bloody well deliver me one ! and even more pleasing - Edouard is on top form! 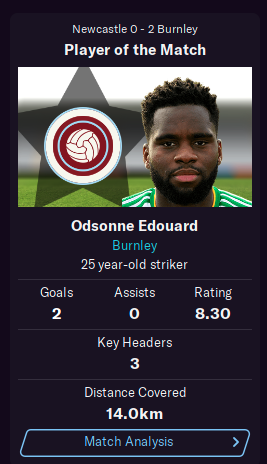 Any further comments or stuff you'd like to see shout up. Im trying to keep in engaging and brief enough, but will happily indulge my inner nerd if people want soo see anything inparticular !
Login to Quote

ScottT
11 months
Edouard! This is better. Long may this continue (despite your lack of confidence!) Just woeful, I just can't handle these big teams and when I concede I panic!

To compound these Stone Cold Steve Austin "Ass Whoopings" .... James Maddison won't sign a contract extension ... so I am going to have to sell him in Jan... with a few sharks already sniffing

As well as my pivotal playmaker, Nathan Ake' keeps drawing the eye and with Umtiti wanting to leave because I haven't strengthened enough in my midfield... I know I need to get some smiles back on faces ... and fast..

I hope everyone can get behind me now the going is getting tough,

October and November looks as bleak as that Ferrari

December looks a little more pallatable and I hope I can pick up a few wins.

14 games in... we aren't in the worst place, especially with these fixtures 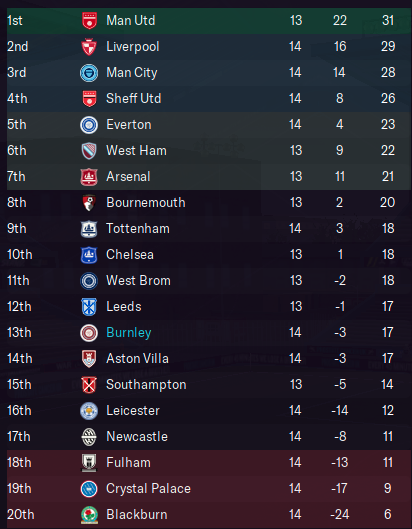 ScottT
11 months
A tricky run. I wouldn't be too down. Maddison refusing to sign a new deal is far from ideal nor is Ake attracting interest and Umtiti being unhappy at the club! A little worrying there.
Login to Quote