After hugely successful year with Newcaste United, I was looking more of the same for my third year at the helm of Newcastle United.

Having won the UCL and FA Cup, I feel like winning the Premier League is the only major accomplishment I have left to achieve. Last season we finished 9 points behind the title winning Manchester United side and after a strong summer of recruitment we should be able to challenge for the title.


As a UCL title holder we qualified for the FIFA Club World Cup, which doubled down as a pre-season for us. The tournament started at the first day of our pre-season and it's fair to say that the tournament totally surprised me, as I thought it would be played during the season.

Maybe they plan the change the tournament format in real life too and this is how it will played in the future. I'm not a fan of that, let's put it that way.

Well anaway, we managed to finish 3rd in the tournament.

Start of the season


The season started well with battering 4-0 and 5-0 wins over Sheffield United and Southampton. It looked like the good times were rolling on us, as team was scoring at will and new guys got flying starts to their Newcastle careers.

We then travelled to play AC MIlan at UEFA Super Cup Final in a game I didn't bothered about too much and used my 2nd sqaud at. Sloppy attitude was punished as Milan took the trophy with 3-2 win.

Premier League season continued as we faced West Ham and suffered a surprising 0-2 defeat. In the game both teams has expected goals of under 1,00, but I was really disappointed about our defensive efforts. I was especially frustrated about our centre back partnership of Onguene & Milenkovic. Both of the players have strong physical abilities, but especially Onguene's case, that's pretty much all he offers, and as I had £40M laying on my transfer kit, I decide to sign a new centre back and move Ongune.

The month ended in 0-2 loss against the Spurs and I lost my nerve.

I thought it was better to play Milenkovic as a CD (D) compared to BPD (D), so I wanted to sign a defender who is capable of moving the ball around. I went for AS Roma's Ibanez and as you can see from the picture above, he has much better technical abilities than Onguene, who moved to Arsenal for £34M.

I think it were Onguene's low Marking (13), Anticipation (13) and Composure (12) attributes that eventually prevent him from becoming a star player for us. I had previously signed him for £14,5M, so at least I made a healthy profit by selling him for almost triple the fee.

We also had the UCL Group Stage draw for the new season. We were seeded to 1st pot instead of the 4th last time around, so we had little easier group this time.

We were once again matched with FC Barcelona, other two teams in the group being Celtic and Austrian side Wolfsberger.

We should qualify to knockout phase with ease as we have significantly better squad than Celtic and the wolf boys.


I had to say it, props for those who get the reference!

September started with 1-1 draw against Tottenham in League Cup in a game in which we were the better side, but couldn't score more than one and lost the game in penaltes. It's not a big deal but then again after finishing 3rd in the Club World Cup, losing the Super Cup final and now getting eliminated in League Cup we had already lost an opportunity to win three trophies and it's only September.

Our Premier League Campaign continued with scoreless draw against Liverpool and as the xG numbers were 0,5 - 2,52 for LFC, we were more than lucky to get a point. I don't know what it is, but we were struggling big time on the defence this season. Well, actually I had an idea about what's wrong, but more on that later.

We started defending our UCL title in Barcelona, in a game which we managed to win 2-1. Former Barcelona boy Ansu Fati scored an opener before Calvert-Lewin made it 2-0. Todibo's 90th minute goal was just a consolation price for the Catalans.

The win over Barcelona filled me with confidence and our players with over-confidence as we had brutal reality check with 3-2 loss against Burnley, who are not very good team. The game was very open as the xG was 2,22 - 2,24 for our advantage. Our central defenders got bullied by Chris wood and Burnley's wingers, mainly Dwight McNeil managed to exploit the space behind our full backs.

After this game I made some adjustments to my tactic. I had used 'Force Opposition Outside' as it was effective on my 4-4-2 tactic but now I had wingers and used my wide defenders as wing backs, so that instruction left too much space in wider areas.

I also took away the 'Counter Press' option, as I felt it had little positives to offer. I already had higher line of engagement and more urgent passing selected, so it's not like we started to just sit back, but I wanted some stability on the defence and felt this might give it.

I also removed the 'Work Ball Into Box' and 'Focus Play Through Middle' instructions and added 'Pass Into Space' instruction as I had plenty of fast attackers and players with good passing to spot their runs behind the enemy lines. 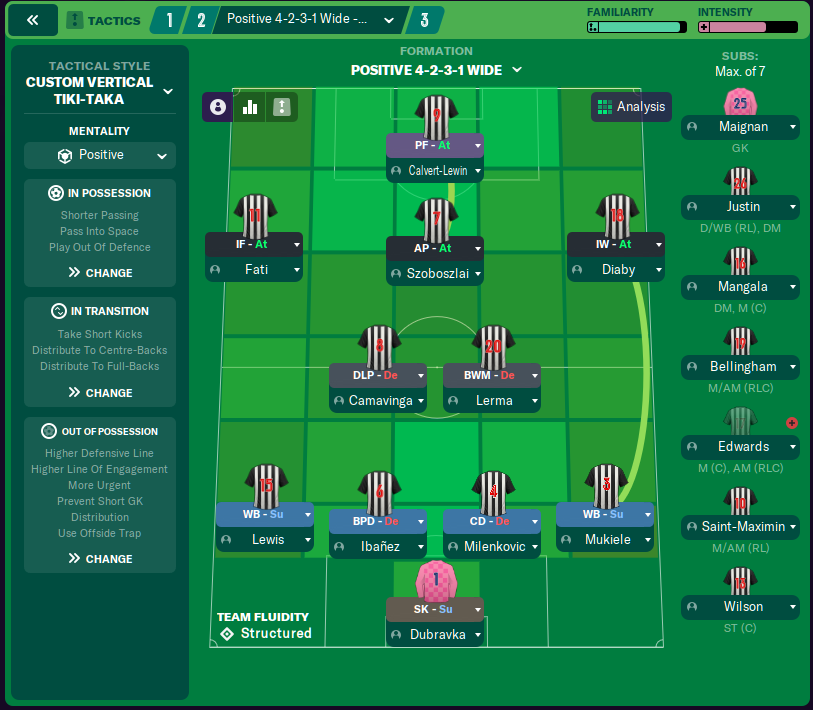 In UCL we spanked managerless Celtic and the Wolf Boys 6-0 and managed to end the month on a postive note with 2-0 win over Aston Villa. 3-3 draw against Manchester United was yet another wide open game and I guess my players might need some time to adjust playing together before the defence gets thight again.

After nine rounds are 6th in the league, 7 points behind the league leading Liverpool. I thought things were already going to turn to better, but oh how wrong was I.

Anyway, we started October with a 3-1 win over Brghton, who offered little challenge for us.

I expected more of the same as we went to play Celtic on UCL. However, they bounced back from the previous 6-0 loss and made us work very hard for the points. Celtic played with goofy 4-2-2-2 formation with two DMs and CMs, so I expected our wide players to destroy them like they did in last time, but sadly our forwards only fired blanks.

Disappointing draw was the result more often than not in the coming games too. Leicester and Wolves were top teams in the league, so away draws weren't the worst results but were extremely frustrating games to watch as I felt we were the better team but couldn't score to save our lives and the opposition got weird bounces and scored with ease.

Perhaps I should be happy to even get a point off Wolves as we were losing 3-0 and 4-1 before scoring 3 times during the last 15 minutes to snag up a draw. 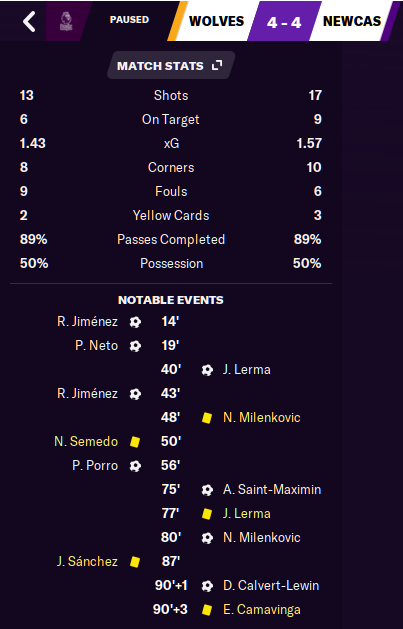 At least we managed to win our UCL group for a second year in a row. 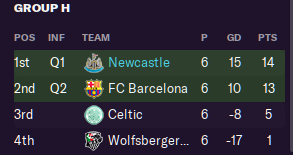 The most annoying game was when we faced Watford who deployed very defensive 5-3-2 formation. We missed chance after chance and they managed to capitalise one of their minor opportunities. Shots were 35 - 3 and the xG 3,11 - 0,31 for our advantage but the result was scrappy 1-1 draw with 81st minute goal. 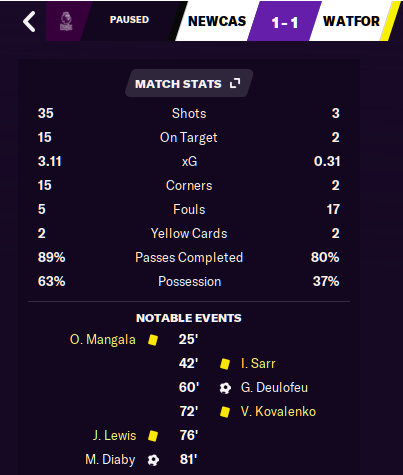 FM changed from Beta to Full Game during this year of my save game and I can't help but to wonder if that had some effect to my tactics. During the Beta I deployed counter attacking system with number 10 player and those two things haven't traditionally worked in FM in recent years.

I feel like I need to once again make more posession orientated tactic which the FM match engine loves and rewards me with some wins. That is unbelievable for Newcastle, in my Burnley game "Burnley Revolution" Im starting to get similar opposition to my tactics, maybe the AI of the opposition is getting wise.

Although.... Ive managed 15th and 10th over two seasons, not quite the heights youve reached.

I totally agree though.... get the players for the system, Im also from the shrewd spending mentality but sometimes its a speculate to accumulate situation. Good luck, and any likewise tips on mine would be appreciated...

You are reading "FM21 Newcastle United - Back to the Top!".