iamslowdeath
1 week
In the new year we had Mohammed join us, a former Malaysian International GK, and his arrival really helps the team but it is not seen on the ground as we lost 3 games in January and only a 1-1 draw vs Guwahati prevented the clean sweep. We also busted out of the super cup in the quarter final stage.
With time running out, we got our lucky break against Bengaluru, we hear the term FMed a lot but it was done in reverse, we had an xg of 0.4 vs their 2.2 but won 1-0. This created a chain reaction when we suddenly started to play really well. 3 wins in the next 4 took us to 21 points in 18 games in 9th place. Even though we lost the last 2 games we were safe from relegation.
Competitions: Unfortunately for us we cant keep Mendes in the squad as he signed a deal with Guwahati.

This has been a tough season, we survived and thats all that matters.
Login to Quote

J_ames
1 week
Staying up is a great achievement in your first season in the ISL, and it's a massive shame that Mendes isn't sticking around. He looks incredibly useful, and could be quite tough to replace. On the plus side... survival should mean that your finances are looking quite good at the moment?

Best of luck in the off-season, I hope you can bring in a few pieces that'll take you right up the table!
Login to Quote

iamslowdeath
1 week
@J_ames It was probably my stubbornness that I lost Mendes. He wanted a better contract in March, but I was not willing to give him that with relegation looming. In hindsight it was probably better to give him that with a relegation release clause or wage drop but then hindsight is 20-20. Finances are looking healthy at a positive 10m INR.
Login to Quote

iamslowdeath
1 week
Season 7 preseason:
After the relegation battle of last season, we needed to improve the team to avoid a relegation battle this season. ISL is down to 19th spot in Asia so money is down to 95m/yr. Board has setup a 4.6m per month wage bill and a 7.6m transfer budget.
Uzochukwu was great for us last season, he has been peppered with offers and a 7.5m offer rising up to 12m was too good to refuse. So we bid him farewell.

His sale though gave us enough money to improve our training facilities. This is our first improvement in facilities and one that makes the sale worthwhile.

With Uzochukwu gone I tried to get my attention to someone to replace him. 18yr old Korean striker Kim Hyun-Chul joined us for a record 5.4m transfer. 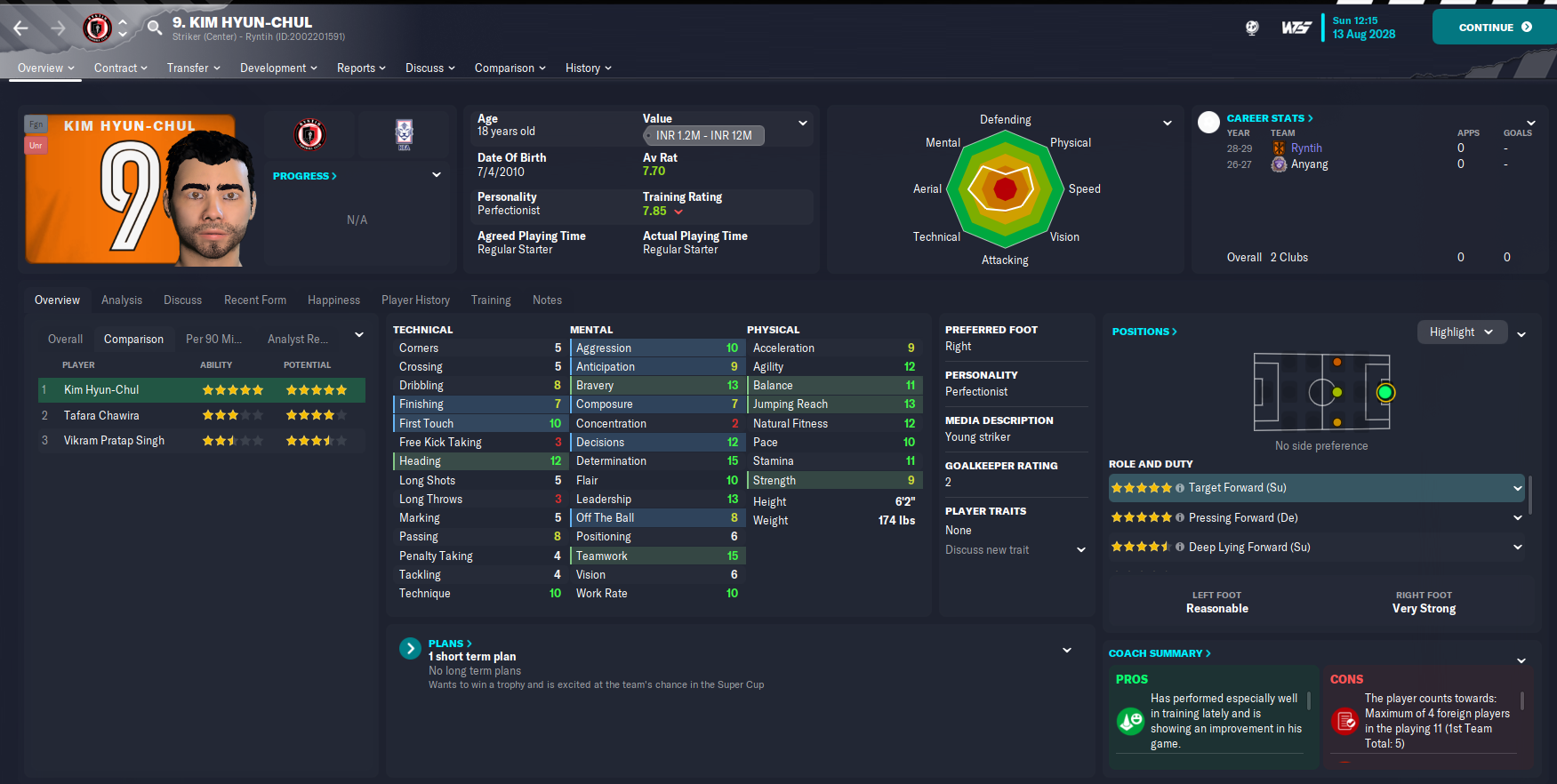 We do a busy summer window, spending a total of 13.5m in total. These signings have brough the media prediction to 9th with 500-1 to win the league. 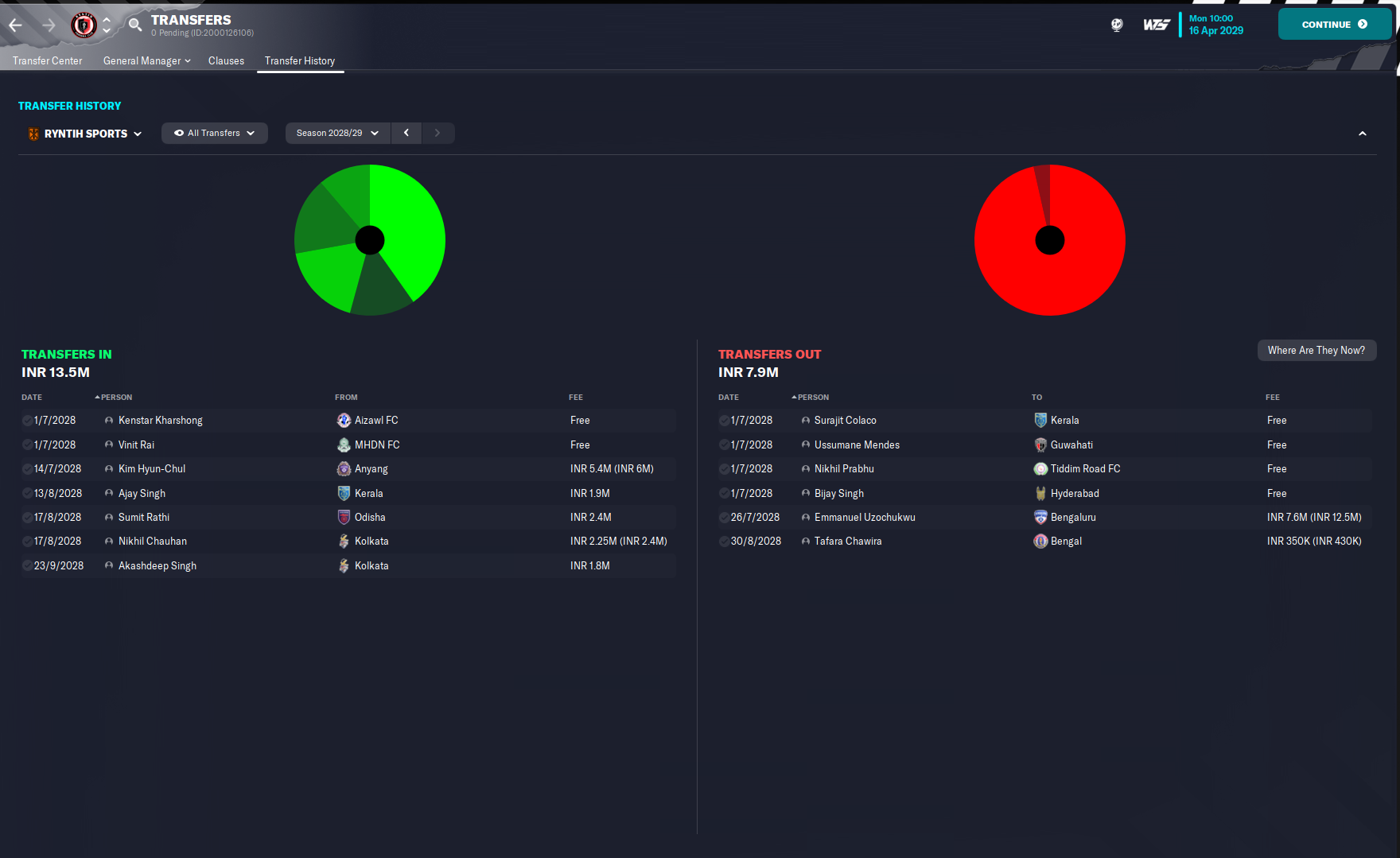 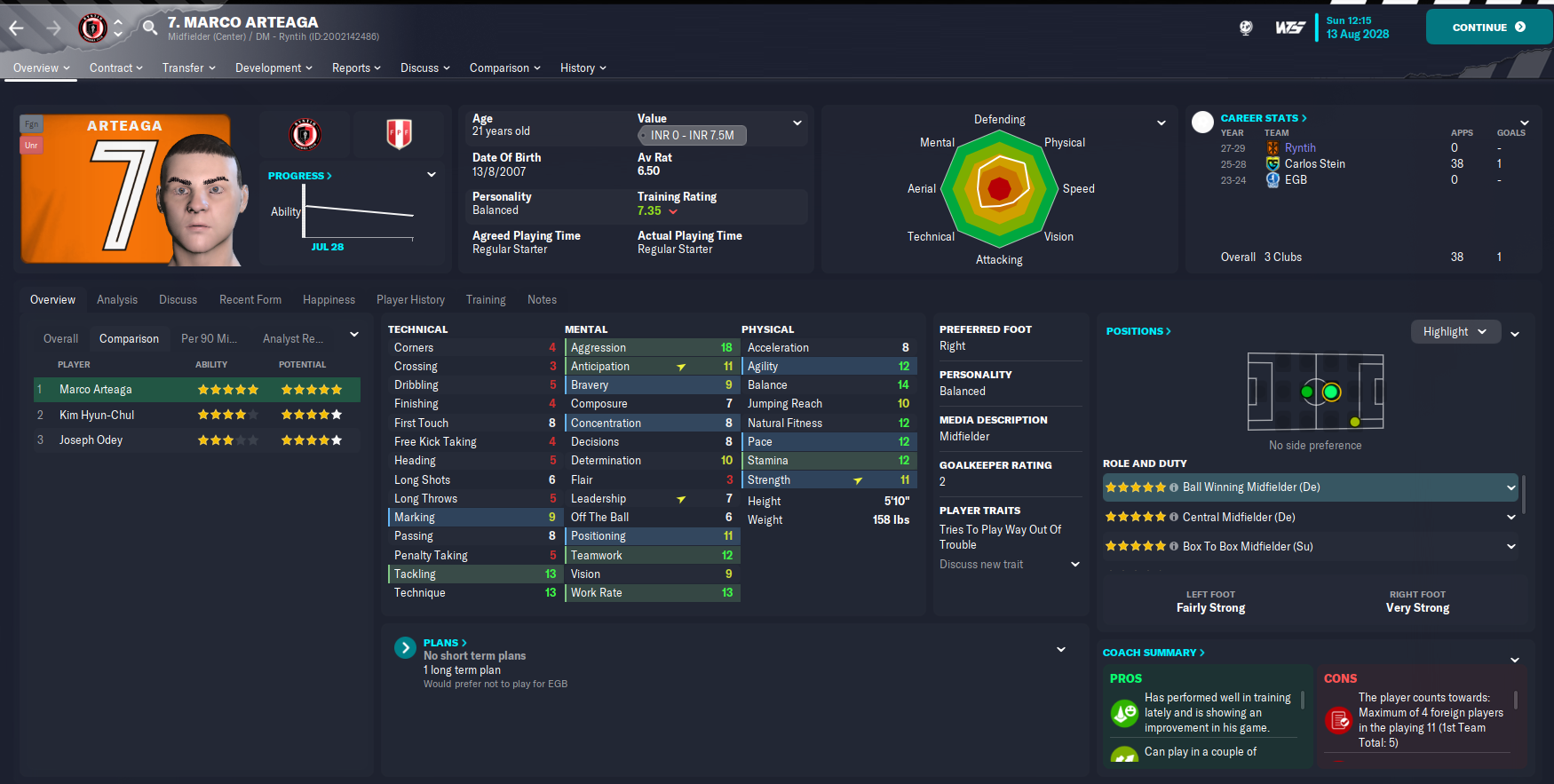 J_ames
5 days
I'm really impressed by your signings, and the upgrading of your training facilities is a welcomed boost too. Having watched Uzochukwu irl, you've got the best out of him in your system, and it's a shame that he's moved on. He's a good player irl.

Best of luck for the new season

iamslowdeath
4 days
Season 7 review:
With ISL starting in September it was important to keep the players fit and match sharp. Had a bunch of friendlies with smaller sides, not much money from these but crucial match fitness. Last season the start was poor, which is expected but for the first few games sharpness was an issue. So I wanted to rectify that from the start.
The strategy paid off handsomely as we went unbeaten in the first 6 games of the league putting up 12 points on the board. A 3-0 loss to title holders Goa was nothing to be ashamed of. We picked up only 1 point in the next 3 games to finish the year at 6th place with 13 points of 10 games. 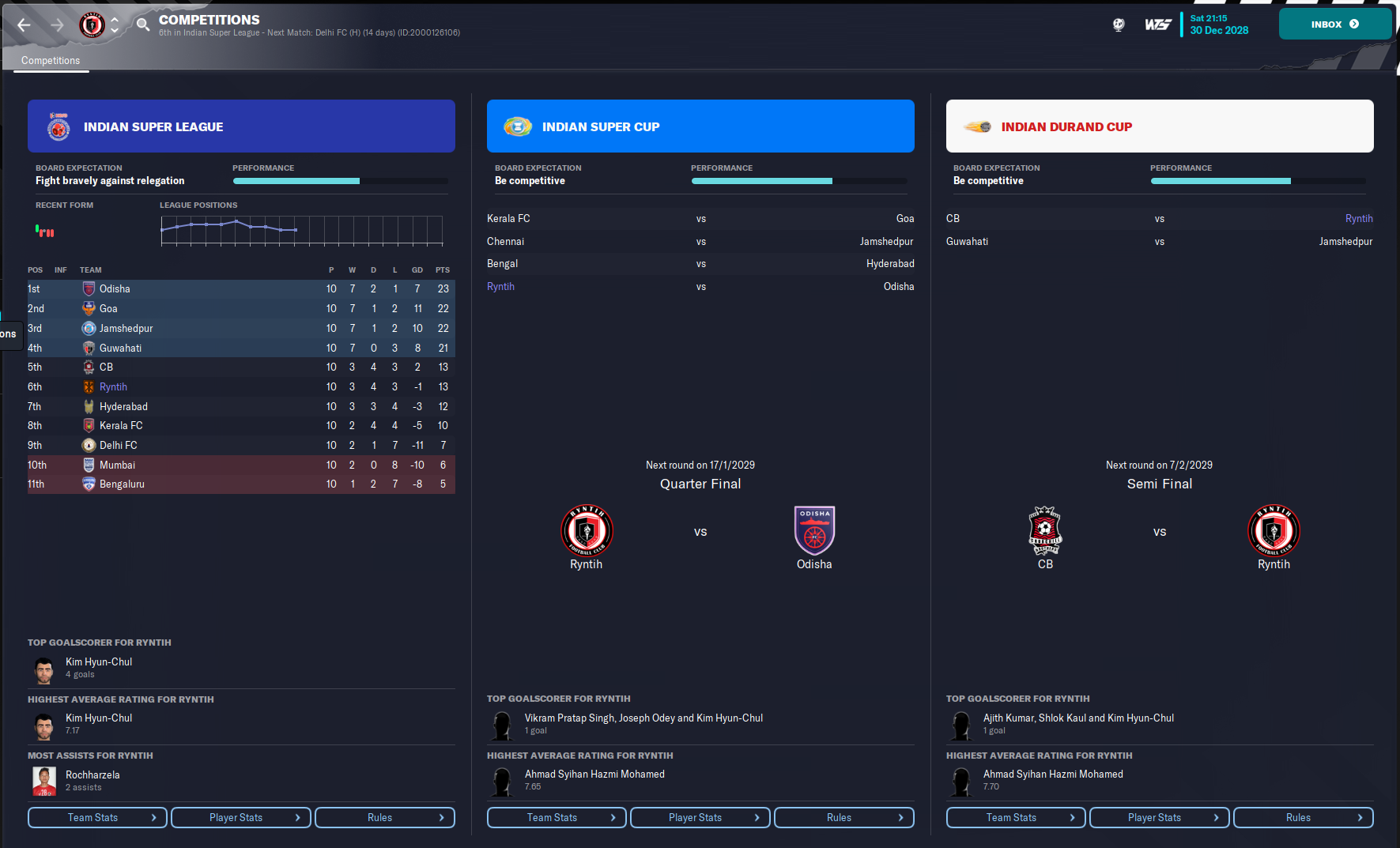 In the new year we lost 2 league games making it 6 games without a win in the league. A 4-1 trashing of Bengaluru though brought in a nice run of form as we beat Hyderabad 4-2 in the league and then beat CB 2-1 in the Durand Cup Semifinal.

We did pick up a couple of more wins beating Odisha 3-0 was a particularly satisfying.
Durand Cup Final:
The Cup final didnt go well with Jamshedpur beating us 2-0. Seemed like we didn't turn up for the game. I can complain with the runners up postion though.

Our Super Cup run came to an end in the semifinals. In the league we finished 6th with 27 points from 20 games. 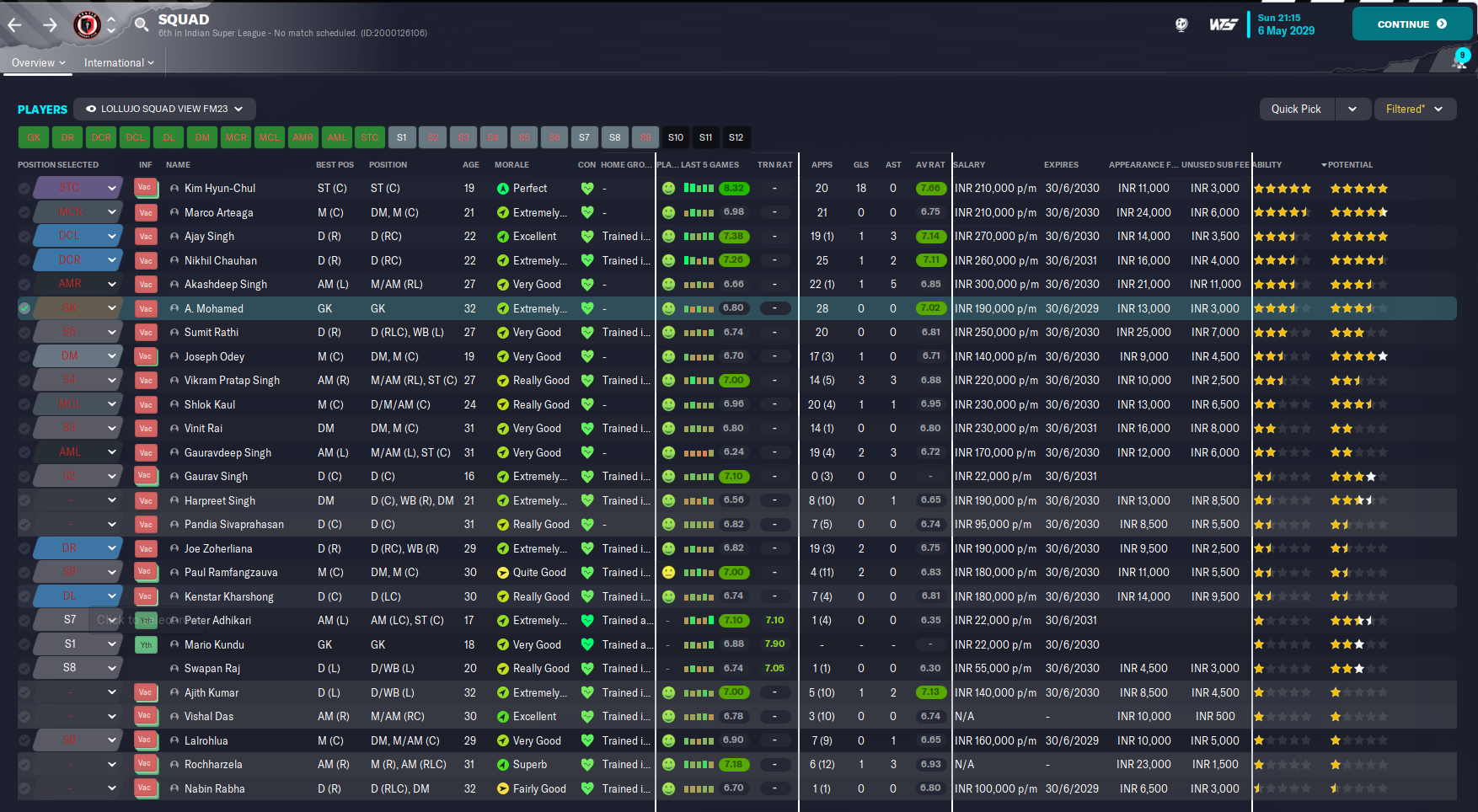 iamslowdeath
4 days
@J_ames one thing that has made these signings really is the fact that there seem like a lot of Agent Offers. All my foreign players signings have been through Agent Offers. And these players are so much better than the local talent so its basically choose any one who can play multiple positions and doesn't ask for too much wages.

I was not aware Uzochukwu before the save. Its amazing how it feels to have players like these.
Login to Quote

iamslowdeath
2 days
Two seasons in ISL means we can try to be a bit more ambitious with our goals in season 8. The board seems to agree and wants us to finish midtable in the ISL this season. This is a goal we can definitely agree on.
ISL has dropped to 20th position in Asia, we are one of the culprits with the lowest reputation in the league. The TV money has dropped a further 4m to 91m. So overall this is a 40% drop in money across all Indian leagues since the beginning of the save.
Our old sponsorships had ended and the new Stadium sponsor is paying 5.5m a year. Also the Jersey sponsor is paying 4.5m a year taking our total sponsorship to 10m/yr. This is a great increase from 4.4m/yr we got earlier.

We went a bit overboard this time with our players, getting Indian players mainly as that was the weak part of our contingent. We also signed up a 18yr old foreign defender in Firdavs Mavnalov.
Overall our wage bill has gone to 6.1m this year. Harpreet Singh made way in a piece of good business for 900k. He was my 4th choice CB so happy to get the money in for him.
Transfers: 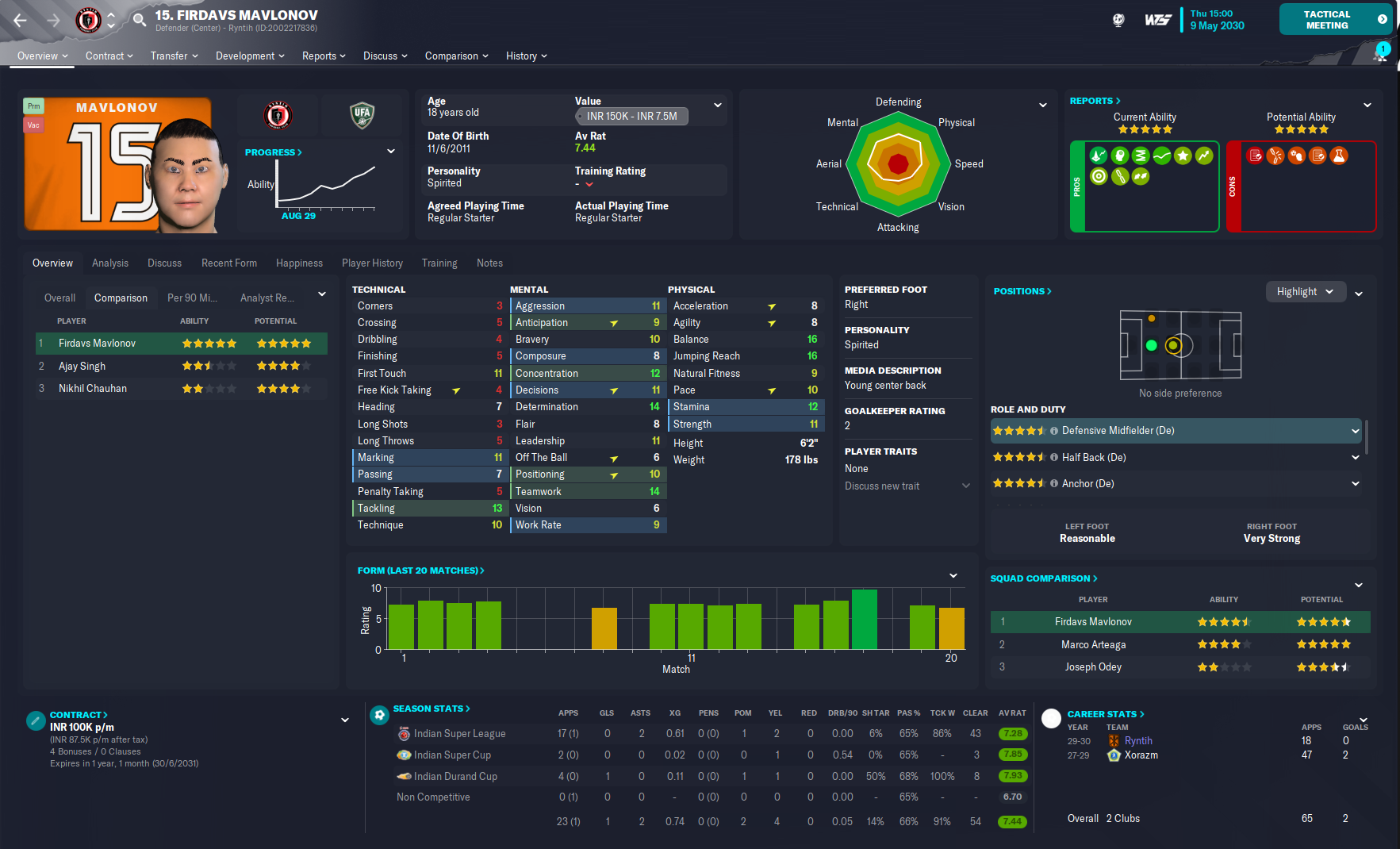 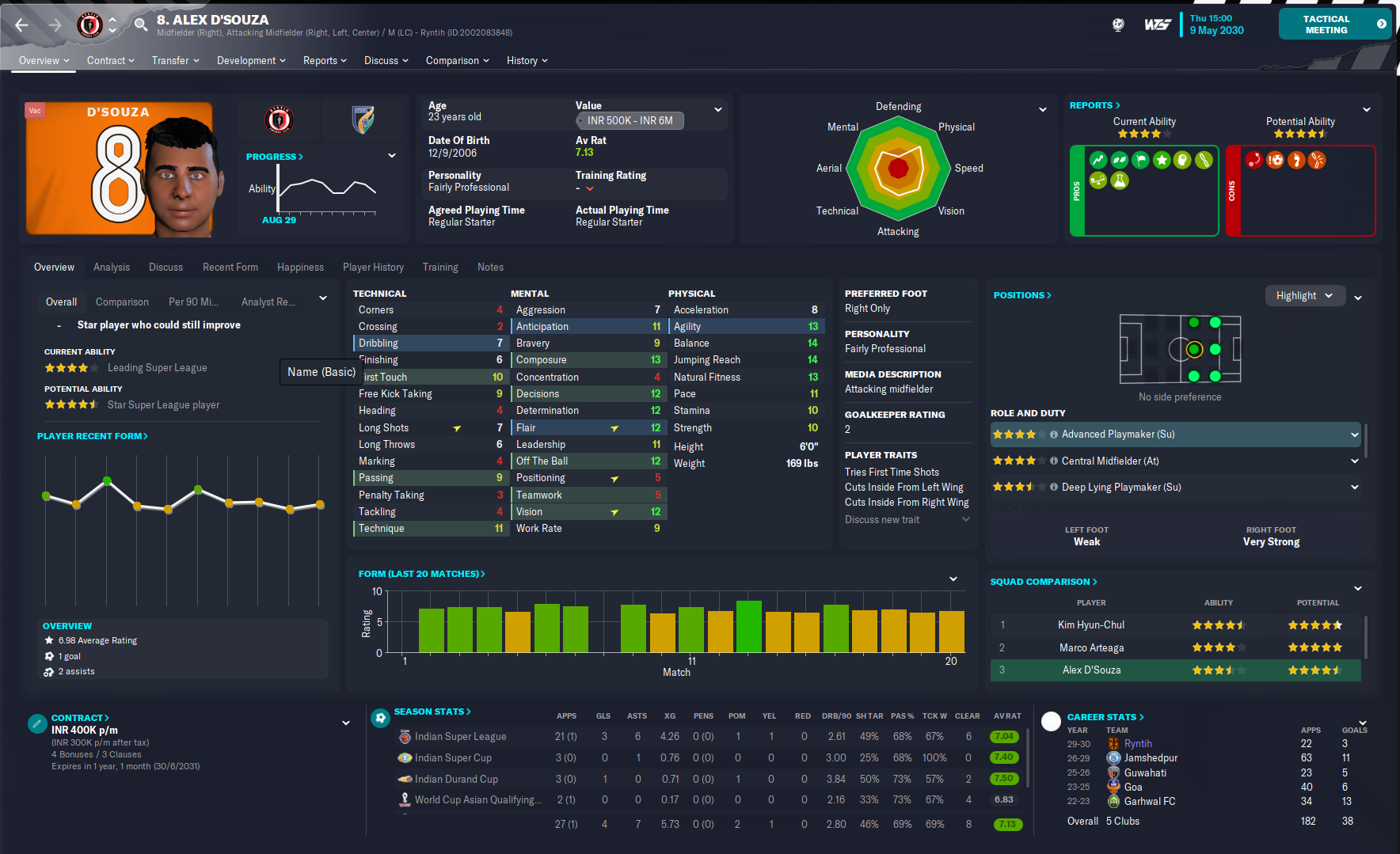 We started off slowly with 2 draws in the first 2 games, and then picked up a couple of wins vs CB and Guwahati. Hyderabad beat us 1-0 away from home but wins in the next 2 games put us at 1st place in the league with 14 points from 7 games. We continued to progress in the Durand Cup reaching the Semi Final with a 4-1 extra time win over Bengal and the Quarter final of Super Cup with 2-0 win over Mohammedan.
At the end of the year we are top of the league with 19 points from 10 games. iamslowdeath
20 hours
Season 8 part 2:
In the new year we began with 2 good wins before form took a huge downturn as we lost 4 in a row to drop down to 3rd spot in the league. We also busted out of the Super Cup in the quarterfinals. In a key move on deadline Bengaluru triggered the release clause for Rehman and pried him out of our hands. He was a big player for us so it will hurt, at least we got 3.5m for him so a 1.3m profit in 6 months is good business.
We did pick up form post the deadline day with 7 points from the next 4 game leaving us in 4th place after 19 games with 32 points.
Table: 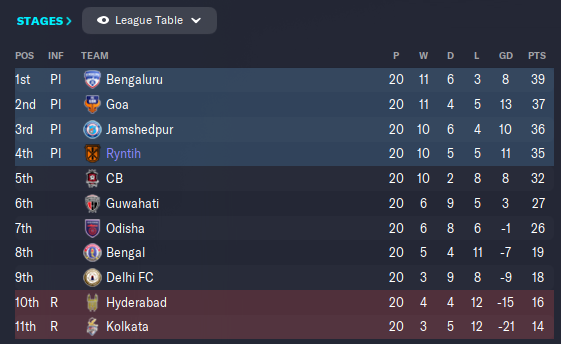 We had our second Durand Cup final in as many years vs Jamshedpur and in front of 25k crowd we lifted the first ever silverware in club history. Firdavs Mavlonov with the goal in 117th minute has etched his name in Ryntih history. 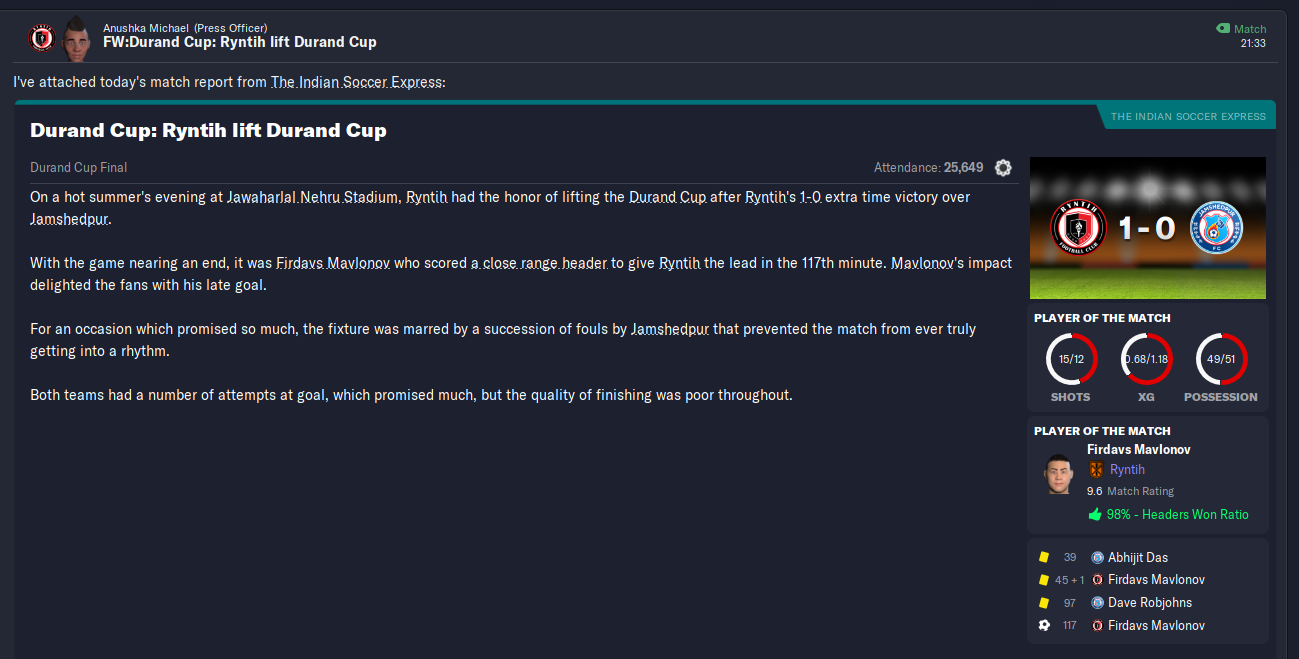 In the final game of the league we beat Orissa 2-4 away to secure our first playoff finish of 4th place. The playoffs didnot go well as we lost both legs to lose 4-1 on aggregate. Still a great season for the club.

J_ames
20 hours
I hint of a drop off in the league towards the end of the season, but it is what it is. In my opinion, it's been a successful season, and the fact that you won the Durand Cup... it's brilliant! Well done mate

It's a shame to have lost Rehman, but with the club going from strength to strength, hopefully there'll come a time where players are no longer asking for release clauses in their contracts.

A big off-season ahead for the club, I'm guessing your finances are starting to look quite healthy?
Login to Quote

You are reading "A Billion Dreams: FM23 build a nation(India)".