In 1900, most of the players left the club for the new neighbouring club of Beerschot AC, and this was the start of a long rivalry between both clubs. Antwerp have won 4 Belgian league titles so far, as well as 2 Belgian Cups. Antwerp FC is also the latest Belgian team to have played a European cup final, the 1993 European Cup Winners' Cup Final. They lost 3–1 to Parma FC at Wembley Stadium. They have been playing in the Belgian Second Division since 2004–05. They play their home matches at the Bosuilstadion since 1923. Antwerp colours are red and white.
Royal Antwerp have a long-term partnership with the English giants Manchester United, often taking their young players on loan so that their development can be aided with first team football, and young players who require European work-permits can benefit from Belgium's more relaxed laws. Despite being one of Belgium's best-supported clubs, Antwerp have floundered in the second tier of the league for several years and are perennial under-achievers.

After looking for a new challenge on FM and a some-what unique story I decided to go for Antwerp, at least it's not another story on a team in the English leagues. Bear in mind this is only my second story

Soon after becoming in charge of Antwerp I saw how much of a challenge this actually was going to be - I knew I had to win something this season. I was given just a wage budget of £3K, with the wage budget already being £19K, I also had £10M of loan to repay.

This season I have to aim for promotion, and maybe have a pot at the Belgian Cup for some extra income, my main objective of course being sorting out the finances. I don't know any long term objectives for Antwerp, maybe become a major force in European football, if I don't get bored.


Now, down to business - Pre-Season

Due to the rather big problem with the wage budget I can't really bring anyone in, I just had to release some deadwood as no one wanted to buy them, but I have still kept a lot of the original squad. 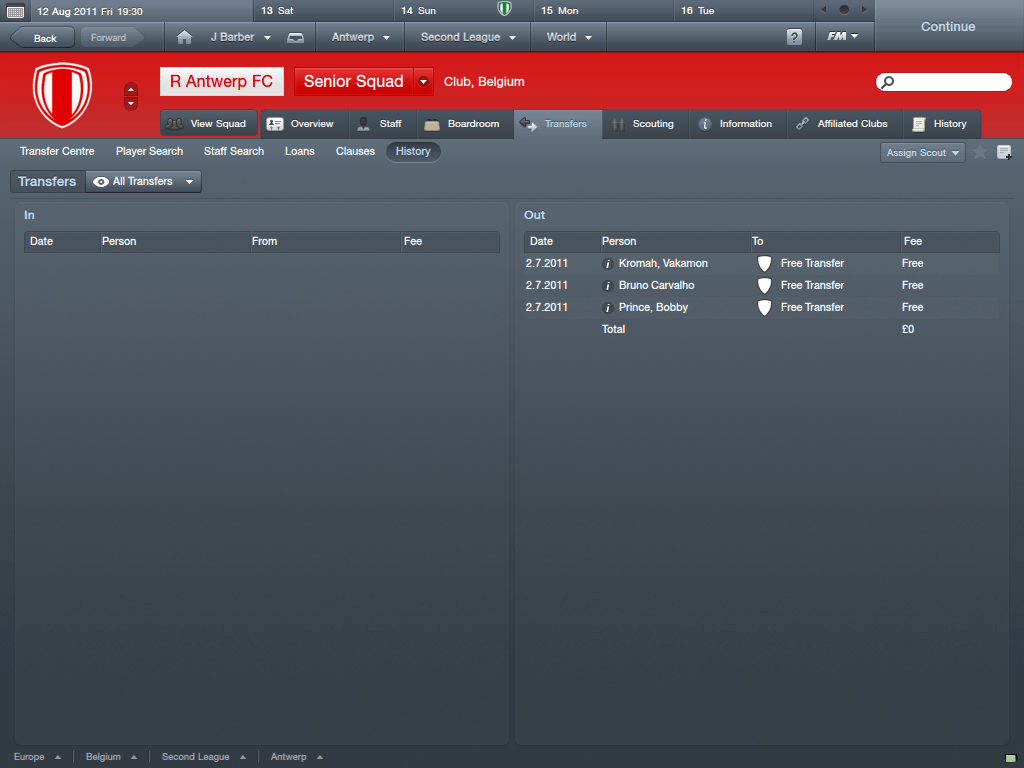 These are the tactics I will be using to bring success to Antwerp, I went for a very narrow formation as that's what worked best with the players left, the difficulty being that the Antwerp players are used to wide football, so they aren't familiar at all with the current tactic. This picture also shows my starting 11. 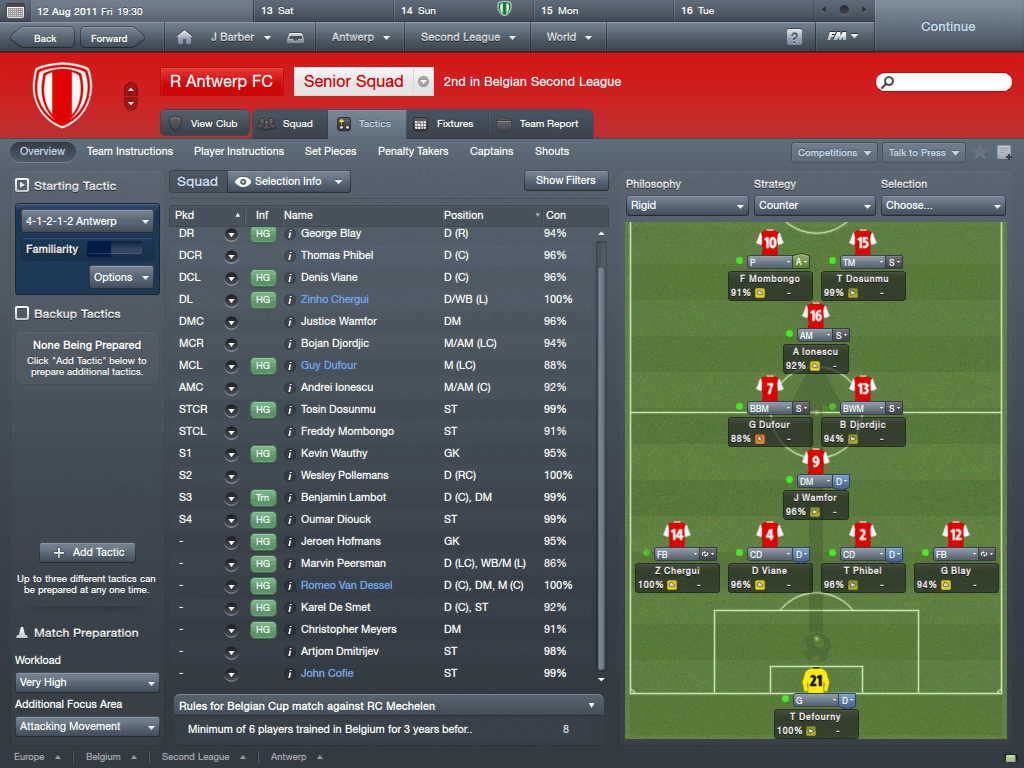 Some extra detail into the tactics: 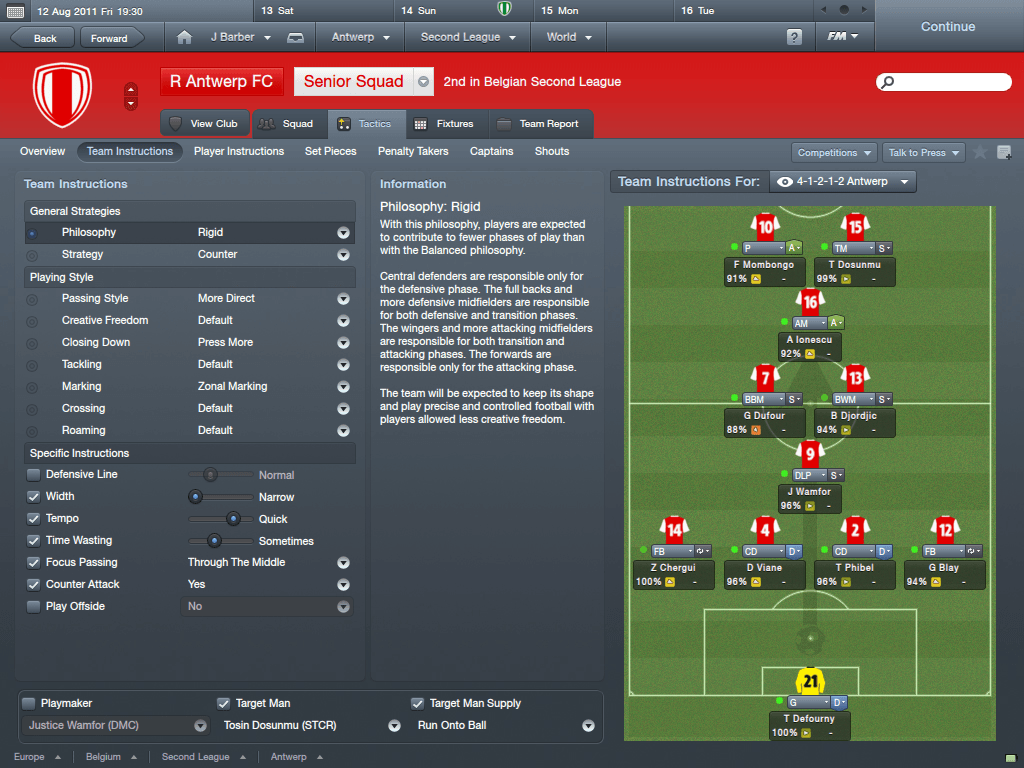 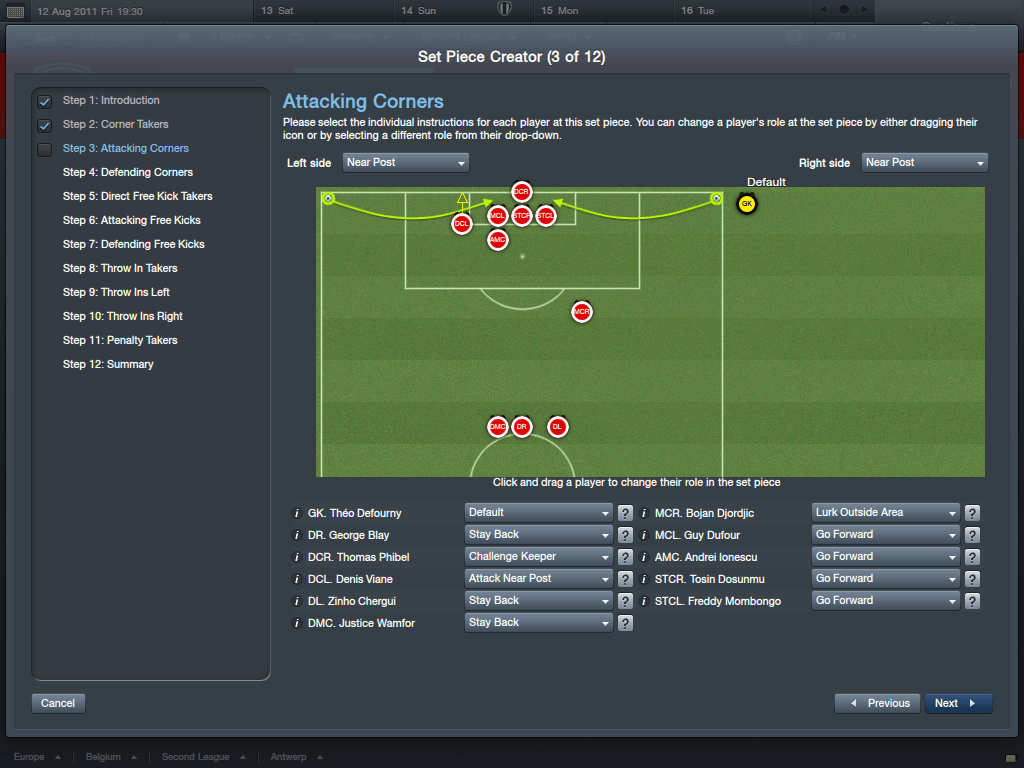 I believe this tactic works well due to players occupying the oppositions defence, a defender challenging the keeper and my other CB attacking the near post, where the ball is aimed, I also have a CM lurking outside the area to be on the end of any rebounds or loose balls.

Results - A very bad pre-season in my eyes, a lot of problems, we should of won the games we drew 2 - 2, in both games I would score and they equalise.
Some games we didn't even deserve to loose, I also increased the normal amount of friendlies to make sure my players get as familiar as possible with the tactic, hopefully this form doesn't rub off into the season, especially this goal scoring problem which seems to be occurring. 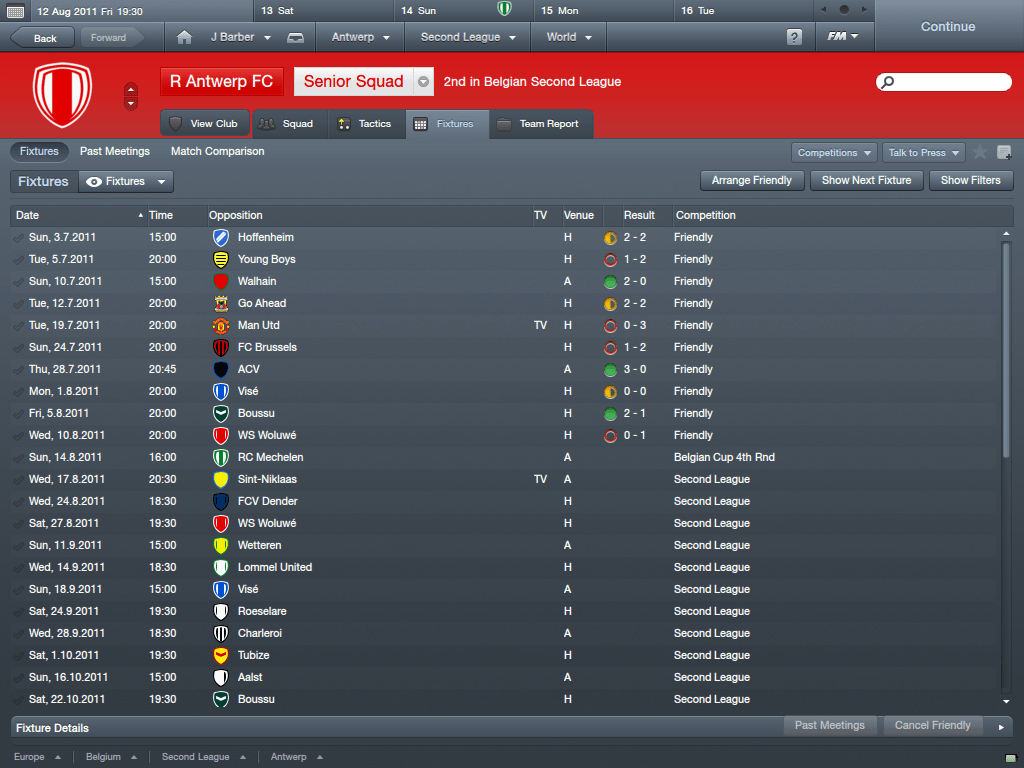 Examples of our terrible finishing. 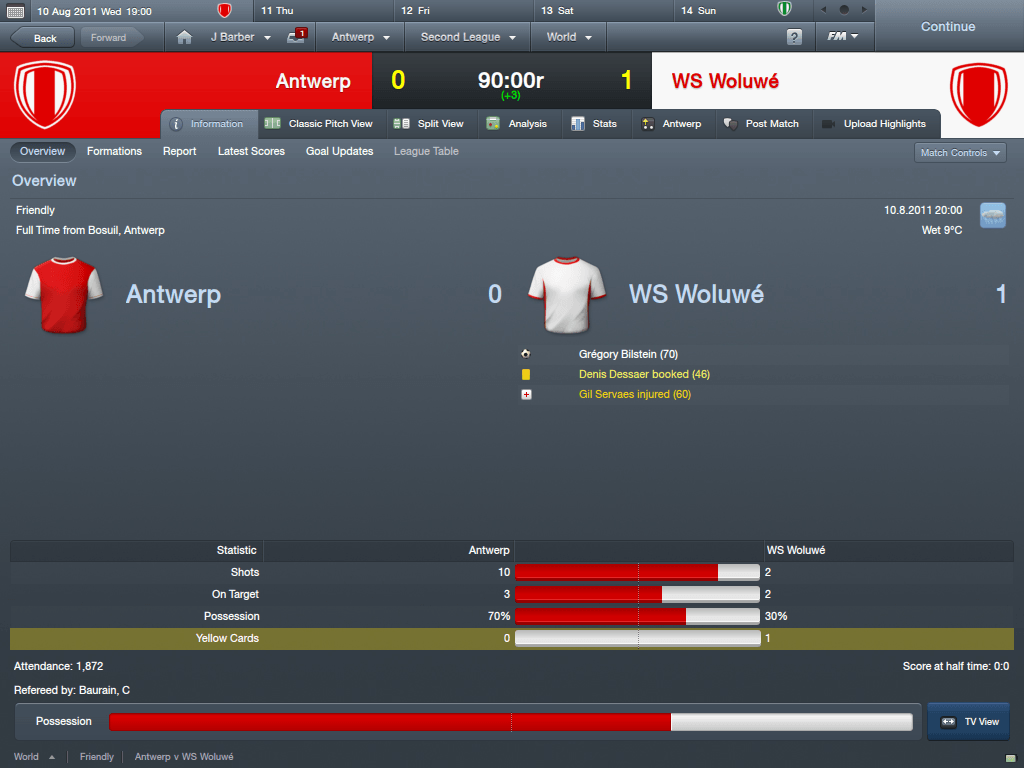 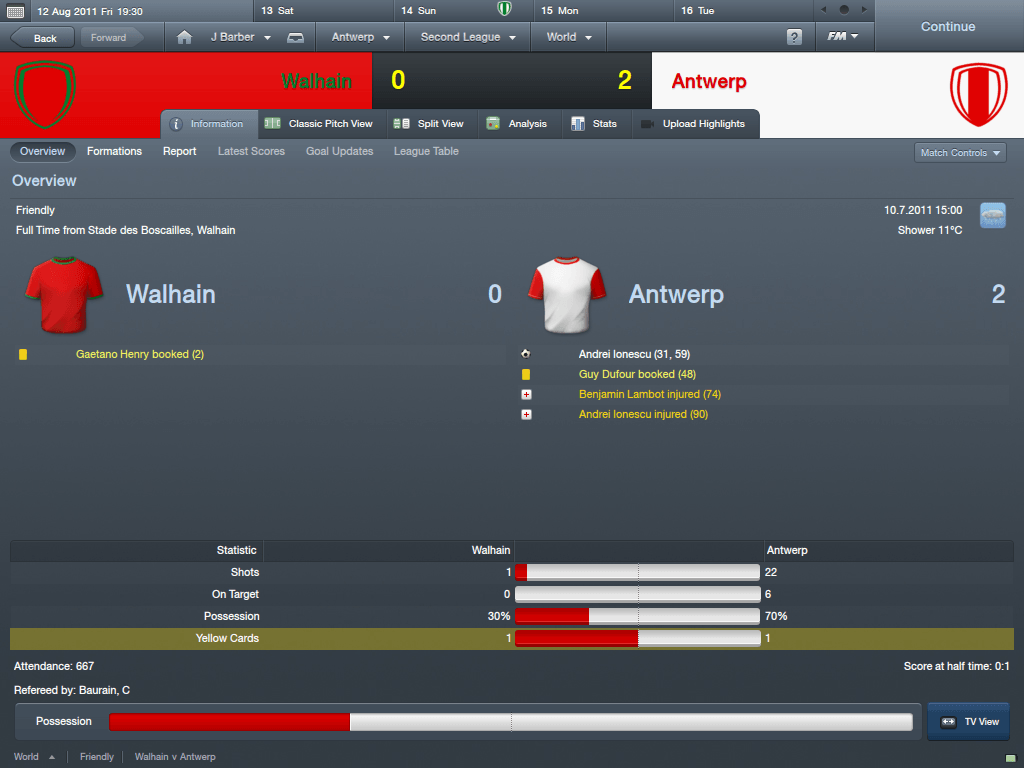 Dylan
10 years
i like the title of your story mate

i will be following for sure
Login to Quote

If every month is like this, well, it's going to be a long season. We managed to grind out 5 wins out of 5, somehow. We won, which is what matters, but the performance from the players is what worries me, Dosunmu, who was probably going to be my main source of goals, has managed 0 goals in 4 games, on the other hand, Viane, my centre-half Viane has managed an impressive 4 goals in 5 games, at least the corner tactic works. 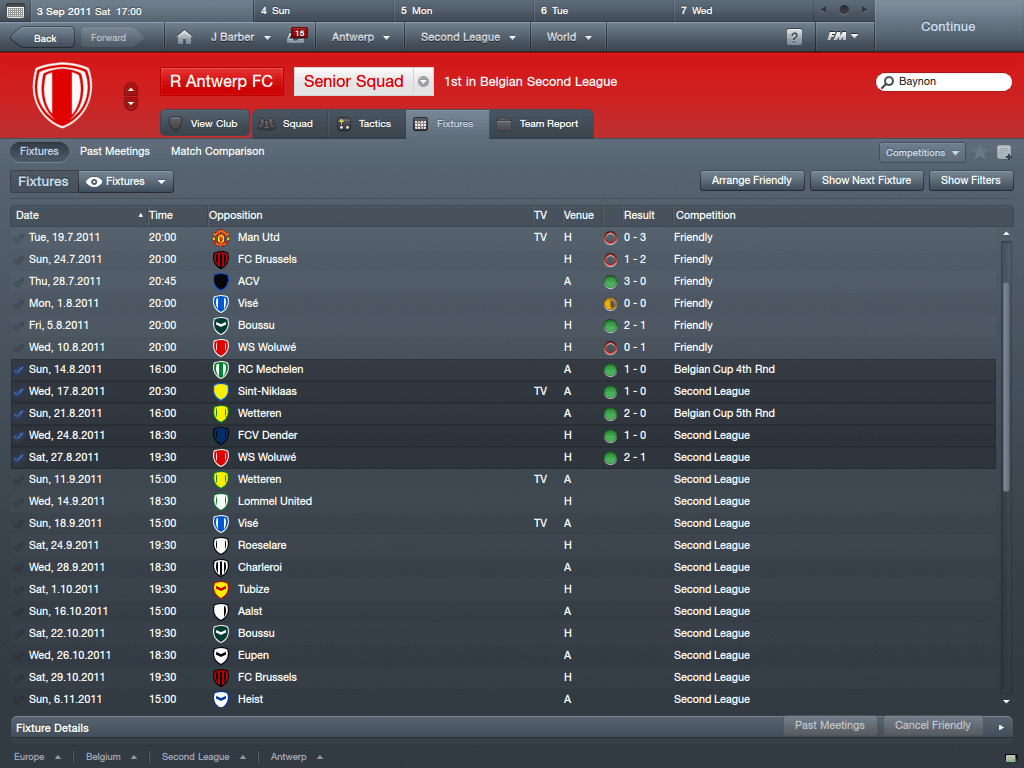 There has also been very little activity in the transfer market, until I decided to sign a striker, Rony Banyon, in the last few days. 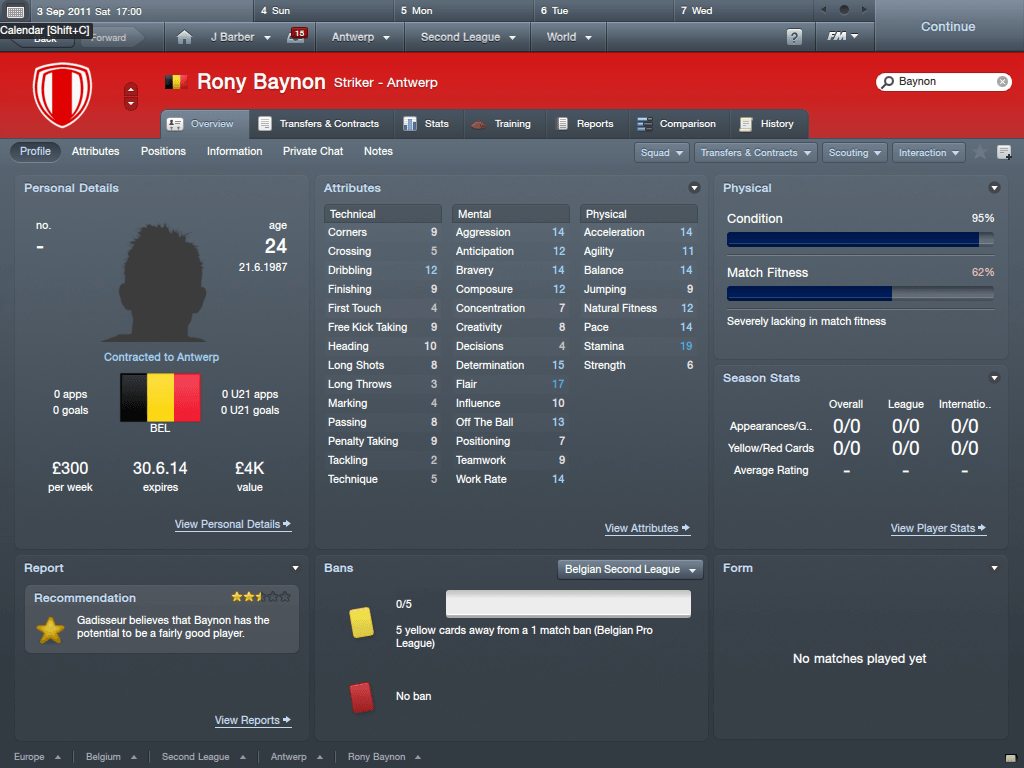 Tactics - Due to the lack of the goals I have tweaked the tactics slightly to see if that does anything, after doing so my main target man, Mombongo, ended his goal drought. 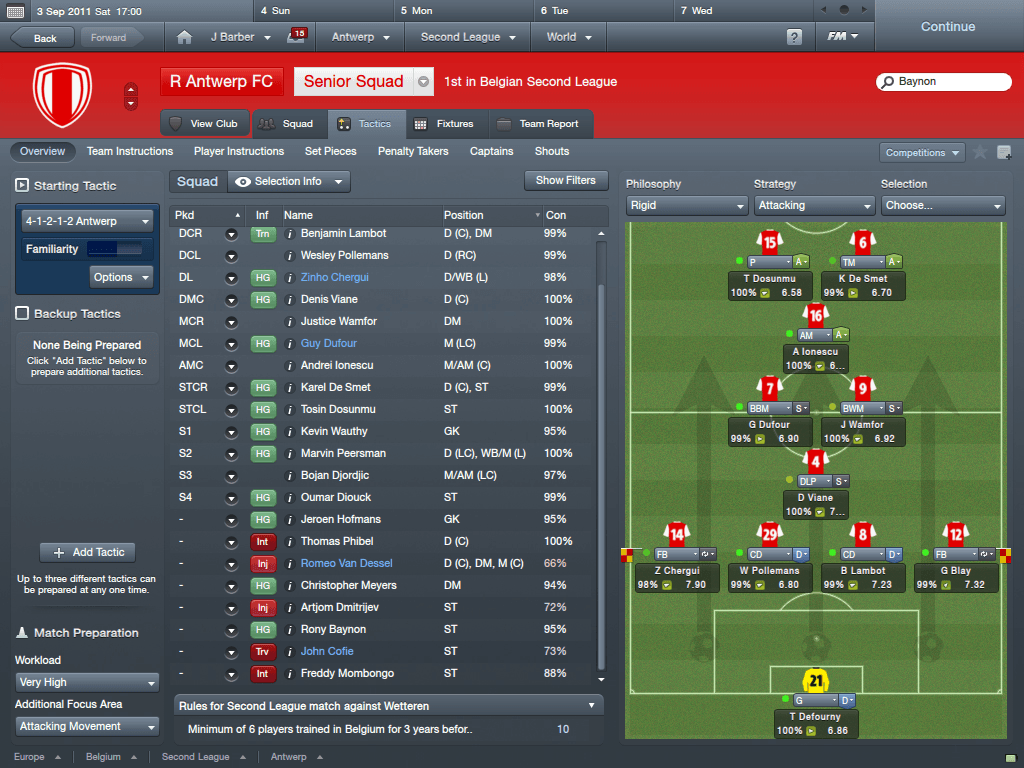 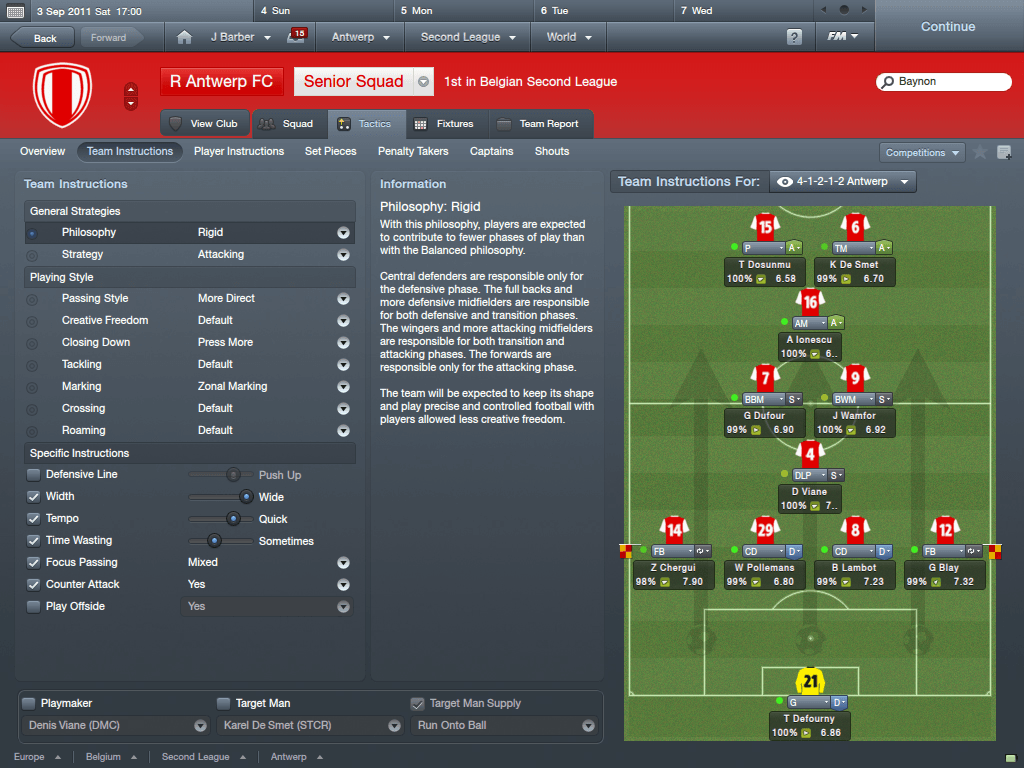 I hope our performances improve over the course of the next month. 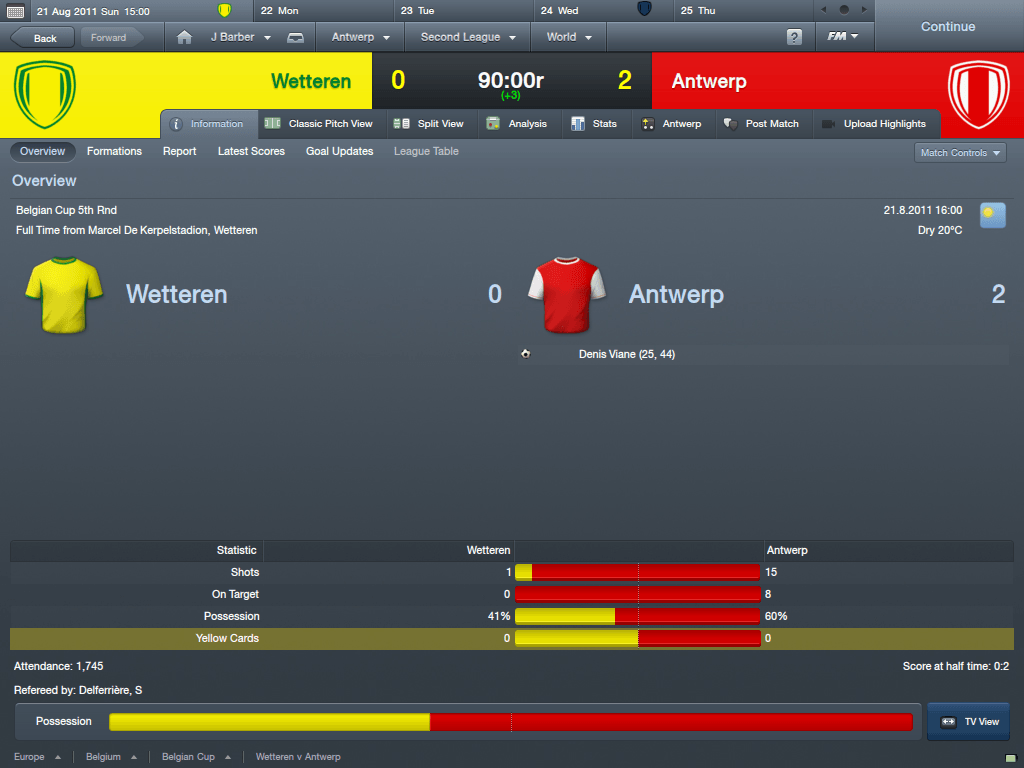 A bit of advice, if you have a weak heart, don't use my tactic with Antwerp. Another season of narrow wins and close calls, apart from I finally won a competitive game by more than 2 goals. 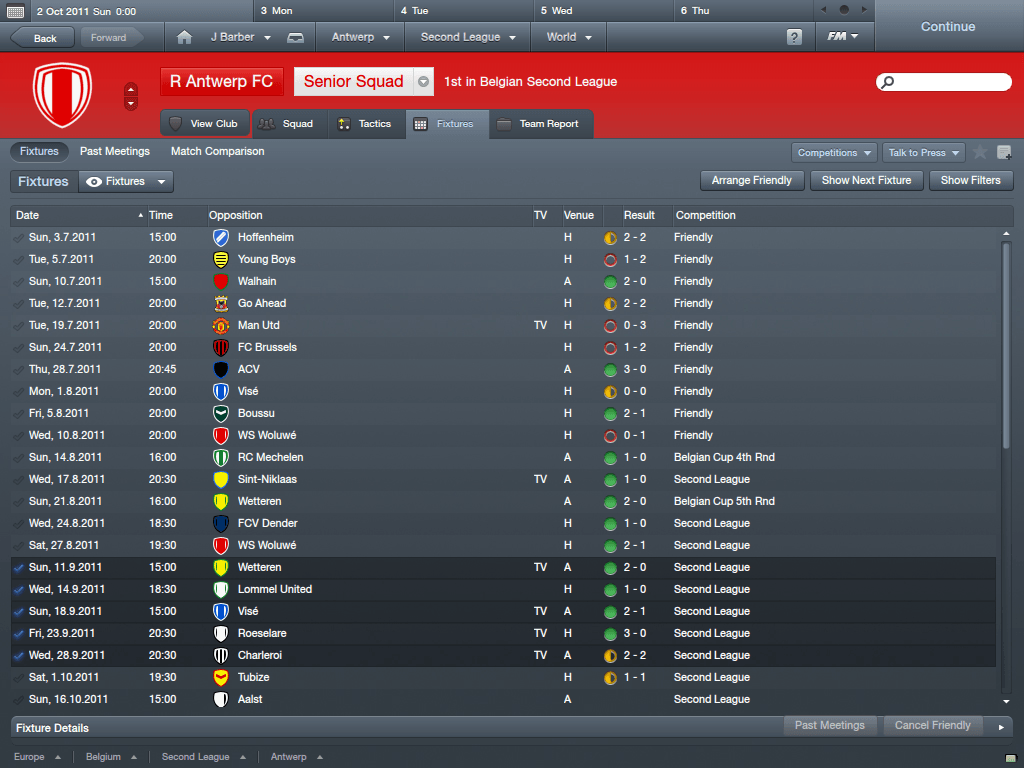 The good news is that after playing 9 games we lie top of the table with 23 points, with a play off place already secured, and Dosunmu finally scored, when I was on holiday, however. 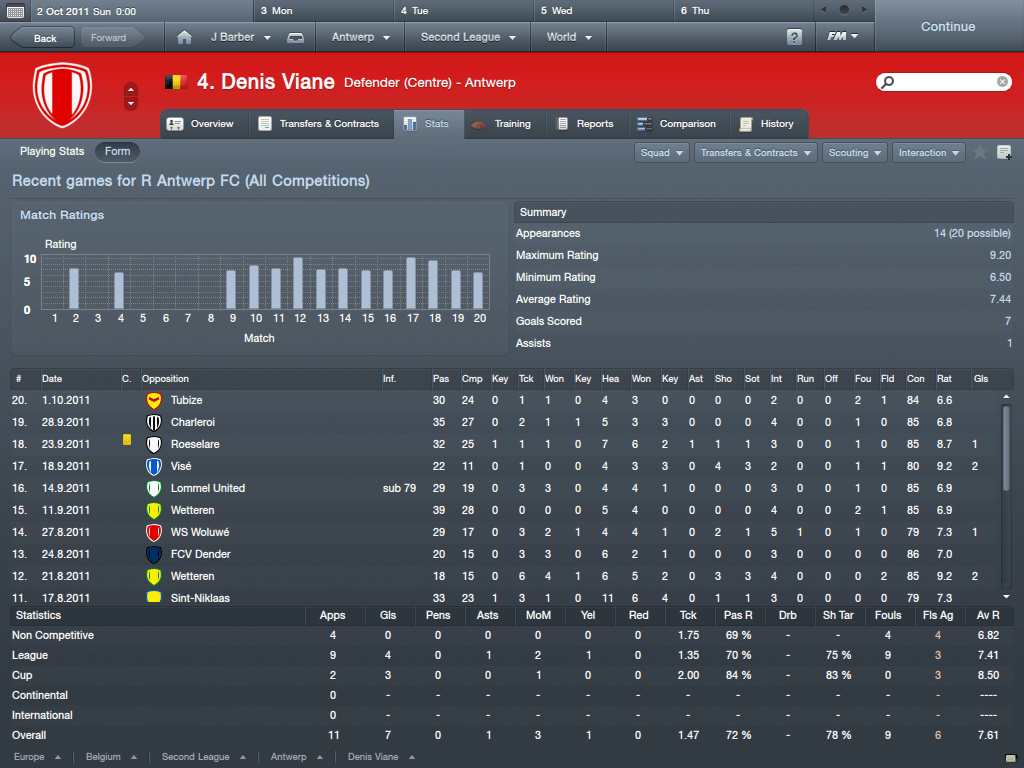 Thoughts - I was considering selling Dosunmu however the 2 goals he scored in 1 game made me give him a second chance.
I'm most likely going to sell Ionescu, as he hasn't been too good this season, only managing 1 assist.

In the future, considering I get promoted, I'm going to totally re-shape this club, I will get rid of all players over 30, bring in some better staff and hopefully some better players in order to remain in the Pro League and build from there.
Login to Quote

Blue
10 years
Where did you sign Banyon from?
Login to Quote

Dylan
10 years
well as you have a lot of problems scoring.. maybe you should try to kget Darko pivajevic back, as he is very popular with the Antwerp fans (king darko) and he used to score alot
Login to Quote

Do you think he'd come to Swindon?
Login to Quote

YoungOwl
10 years
@funny, I would, but he's too old, like I said I plan to have a younger squad, hopefully get rid of anyone above 30, maybe 32.

@manchester, I wouldn't know, if you have the Belgium leagues selected you could find him and see.
Login to Quote

I'm pretty happy with this month, results still going our way, but I can't really comment on players performances as I left the majority of these games to my assistant manager. 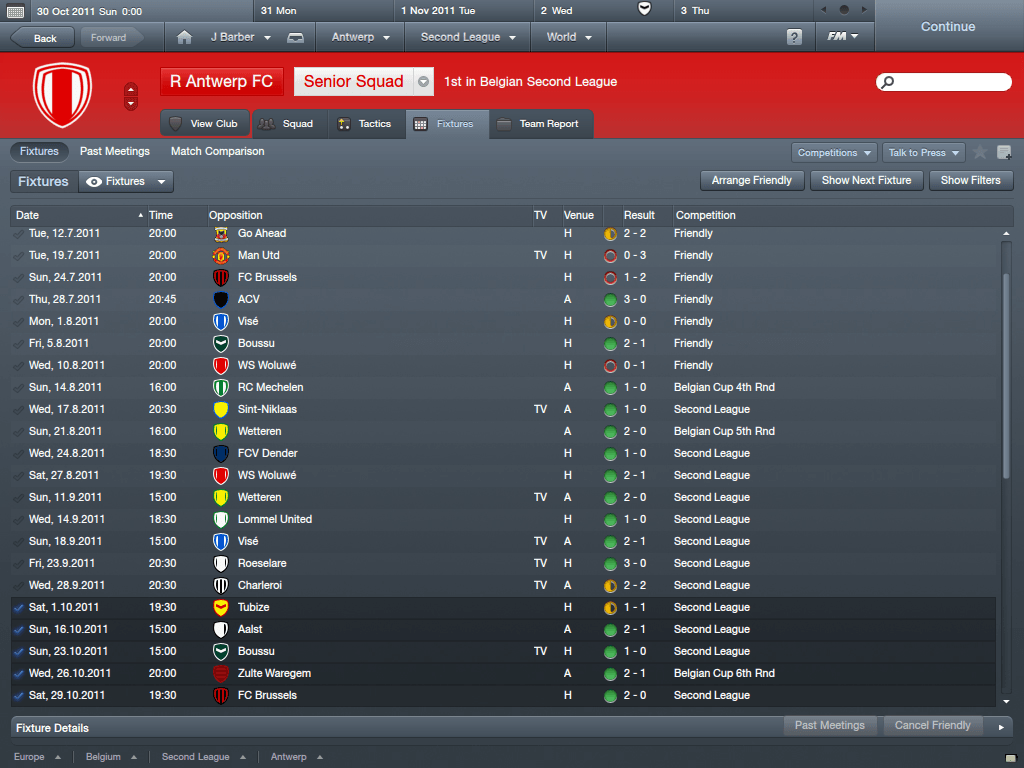 I'm happy to have beaten the Pro League side, Zulte Waregem, in the Belgian Cup, that was a good win for us, surprisingly I left that game to my assistant manager so it was even better

I apologise for the lack-lustre and rushed summary but I planned to do this earlier but I had to go and completely forgot what I was going to say, I should probably write notes in the future.
Login to Quote

Decided to do an end of season summary instead of monthly.

In other news, we won the Second League! 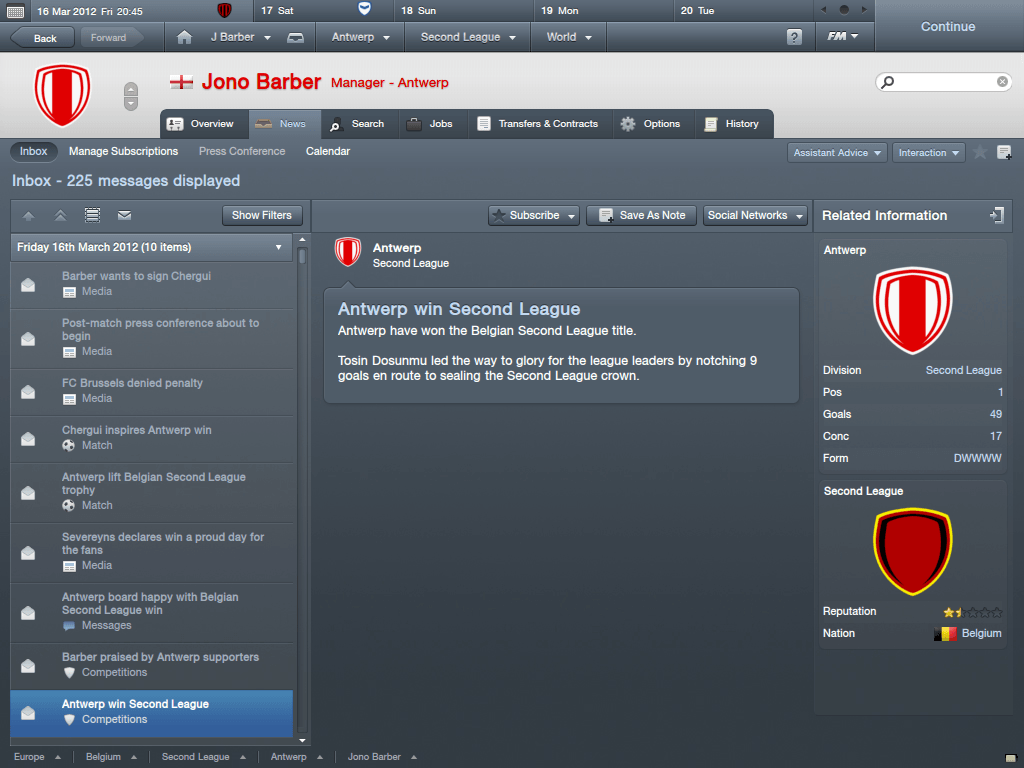 I face KV Kortrijk in the final of the Belgian Cup!
Login to Quote

You are reading "Antwerp - Welkom In De Hel Van Deurne-noord".