2 Players join us on loan from Man Utd due to our affiliation with them, this will certainly make the remainder of this season easier for me, maybe I do have a chance at staying at the top of the table, these two players are Ryan Tunnicliffe and Will Keane. However, Tunnicliffe got injured during a friendly and will be out for 2 weeks. 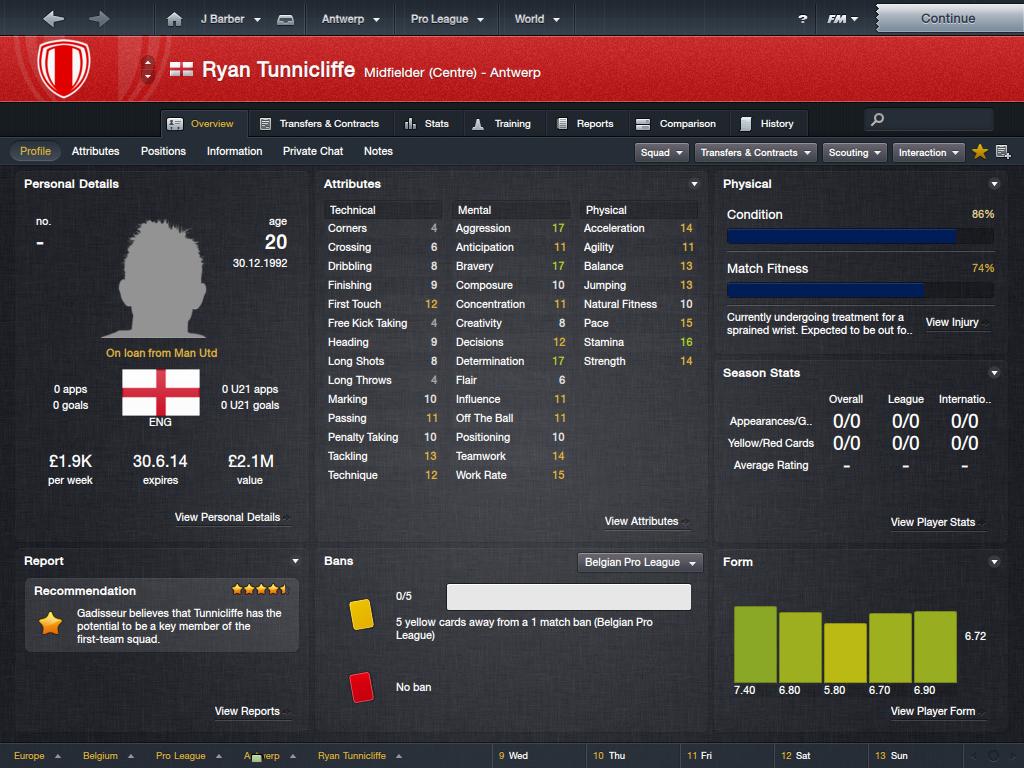 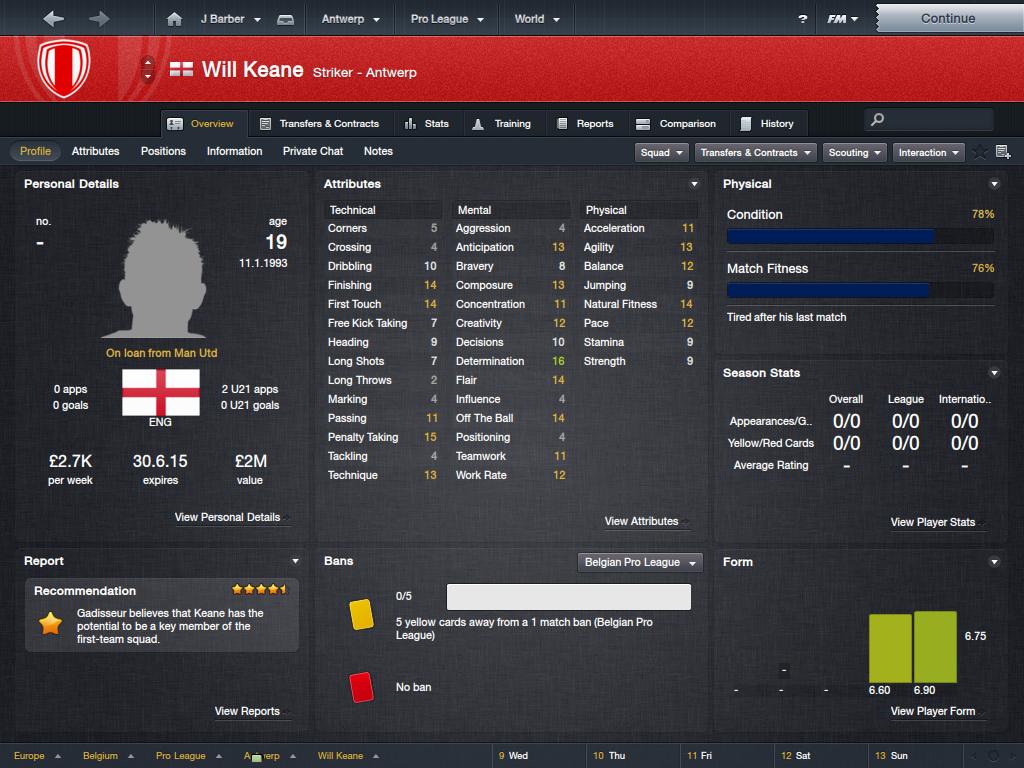 Atreidas
10 years
Brnas certainly has proven himself hasn't he? Keep up the good work

Dylan
10 years
as owl asked me i'll explain the rules.
after you played the 30 games , there will come 3 groups: European playoff groups 1 and 2.
and a playoff group.

I face Anderlecht in the final of the Belgian Cup, and I'm in the Pro League Championship which funny kindly explained the rules for as the Belgians leagues have rather confusing rules 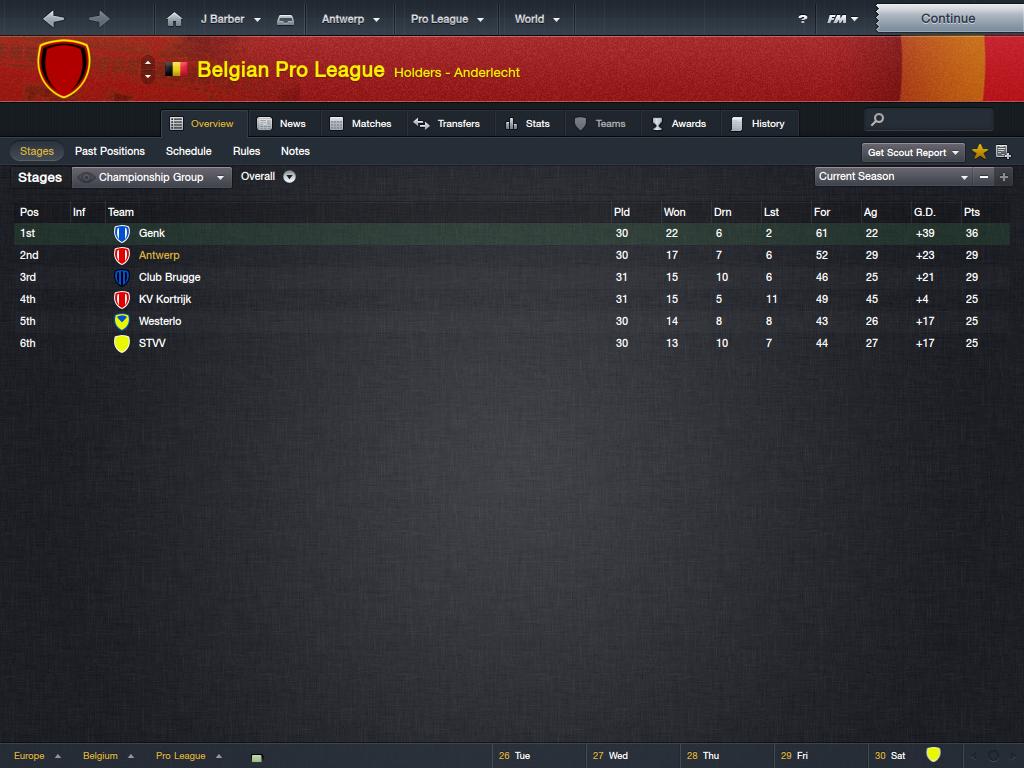 Bring on the tense games!
Login to Quote

Final game of the season in the league is against Genk, the current table. Afterwards, we play the final of the Belgian Cup. 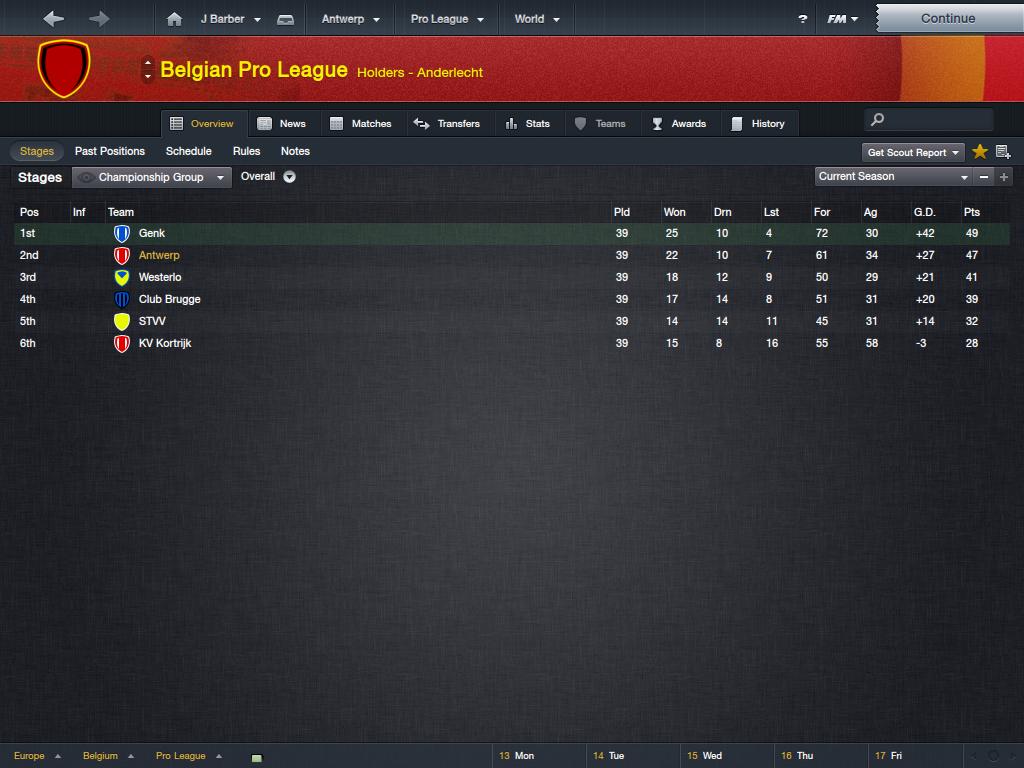 On the day our boys knew that a win would see us top of the table, however they all knew Genk were a better side, so a defeat or a draw wouldn't come as a surprise. In the end, this is how it ended and a final look at the table. 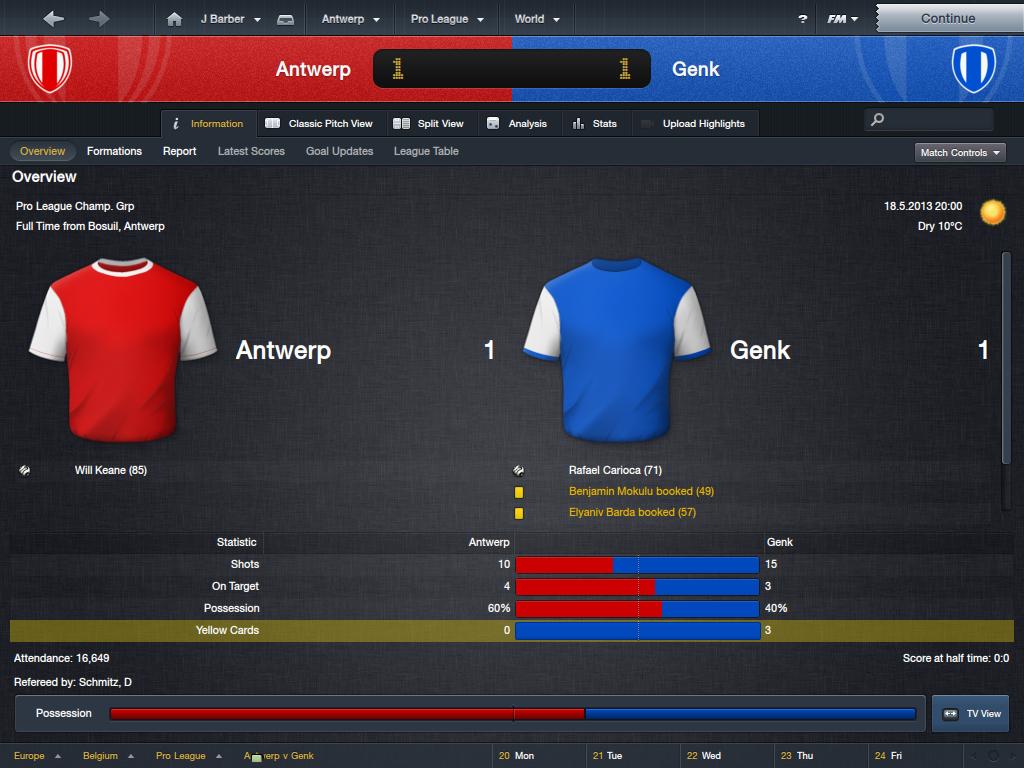 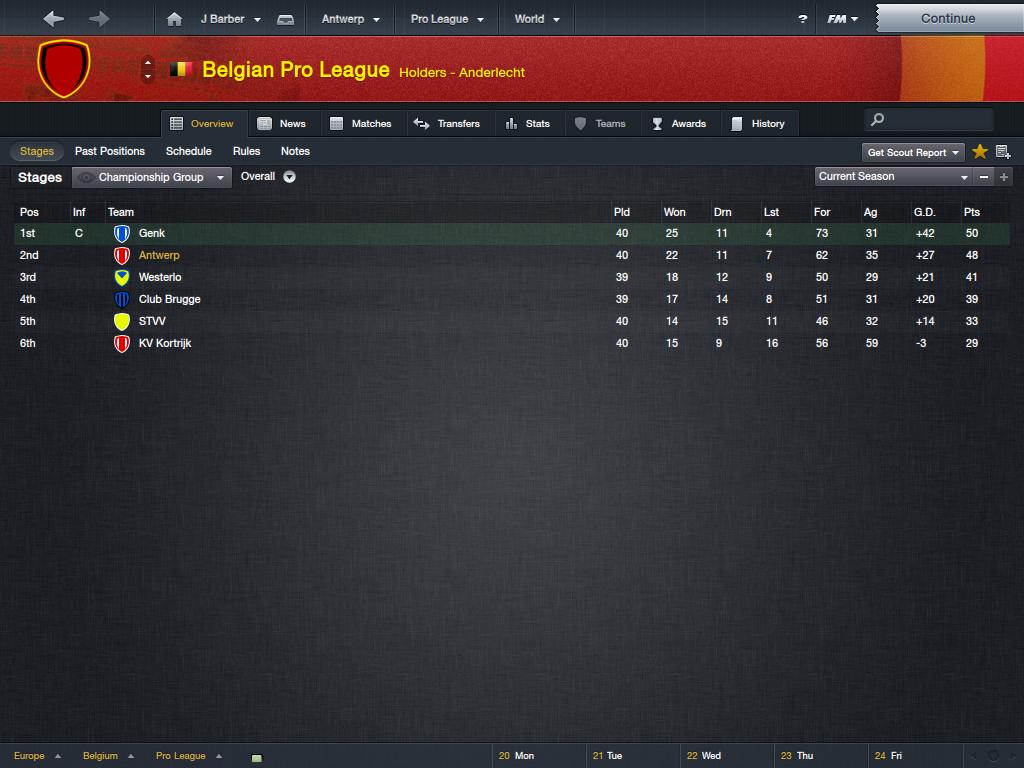 We won the Belgian Cup! I'm delighted to say this, especially after defeat last time round. I certainly think we had luck on our side today though, but we won at the end of the day. Even more good news is that we qualify for the EURO Cup! 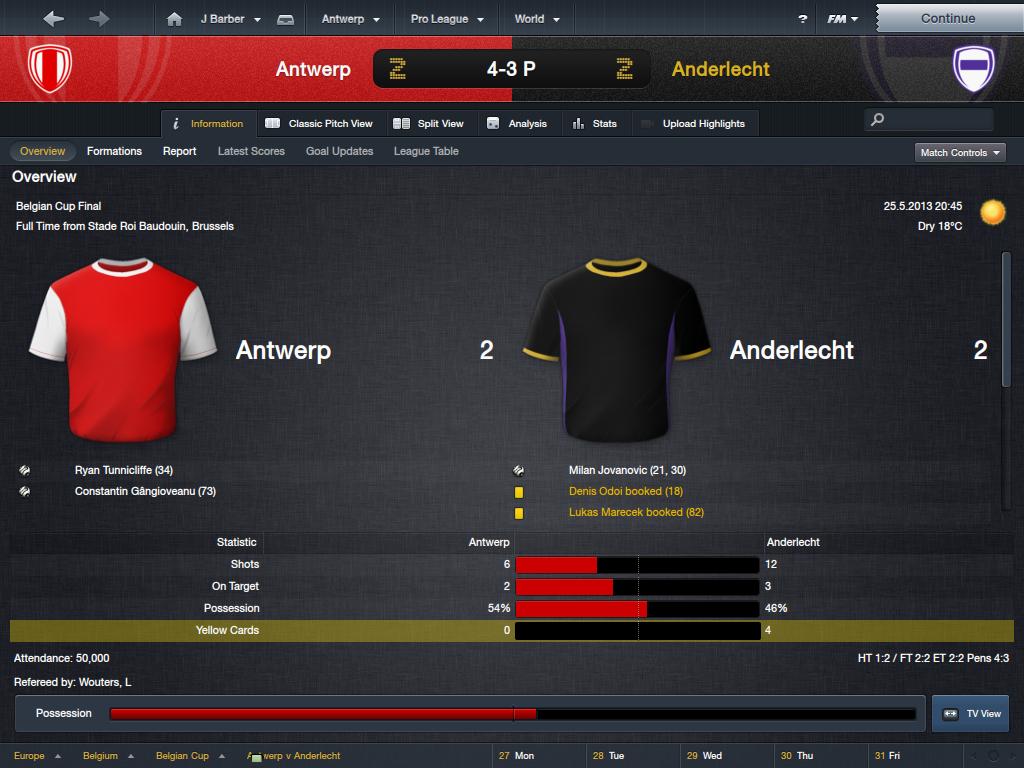 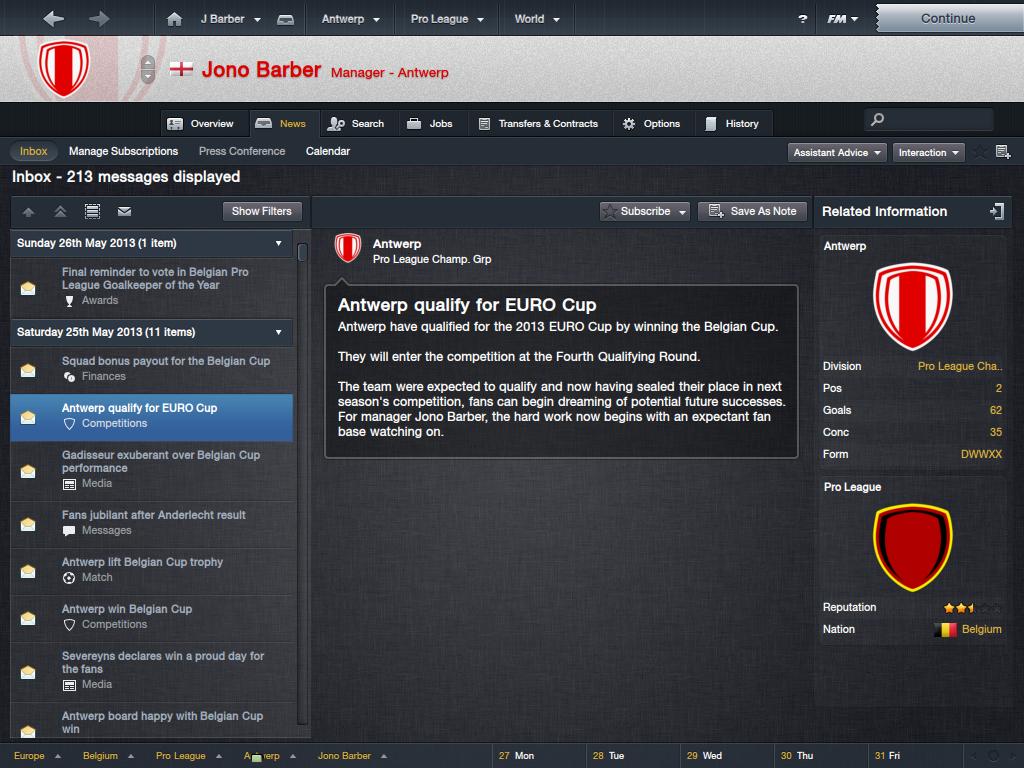 P.S - An end of season review will be posted in the morning, I'm not going to do a full on summary half asleep as it would be lacklustre and pointless.
Login to Quote

I'm very satisfied at where we ended up in the league, admittedly some results went our way and maybe a bit of luck too, but sometimes you need that. I don't know if this season was overachieving, due to most matches we were favourites, unless against the likes of Genk, Club Brugge or Anderlecht, in these matches they were clear favourites, and that's when our luck came in to win against some of these. Also, qualifying for the EURO Cup next season is great, it will be a boost in every aspect for this club I believe. In addition, winning the Cup this time round was delightful, we were after the cup after last time and that's exactly what we got after 120 minutes of solid football. 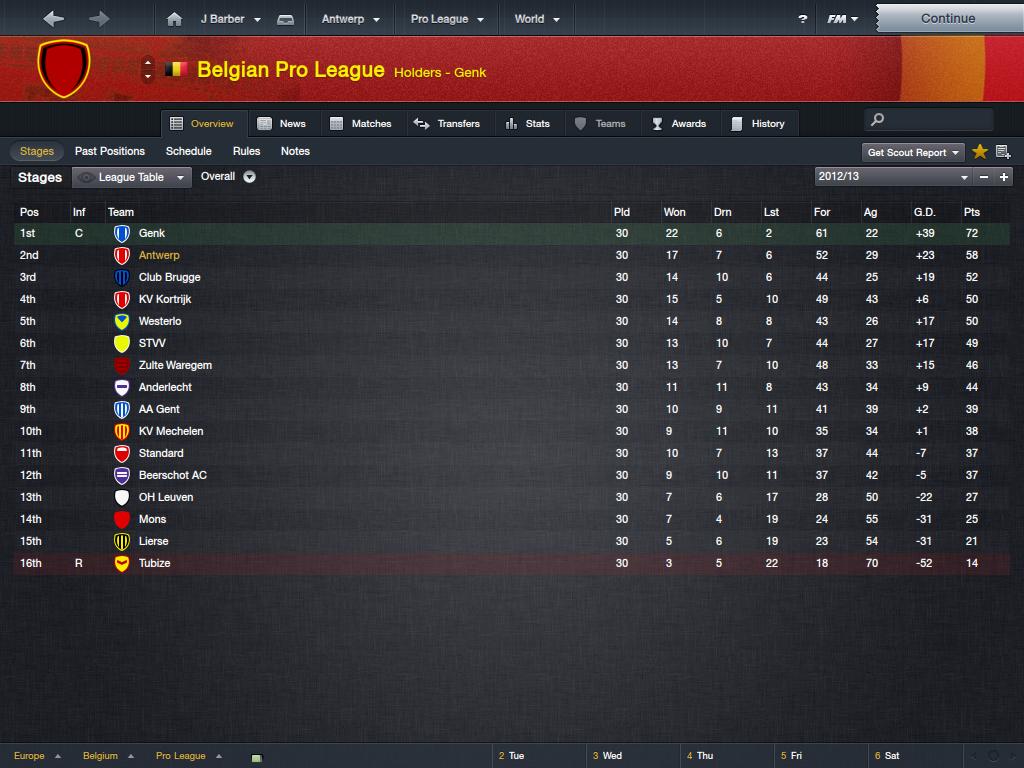 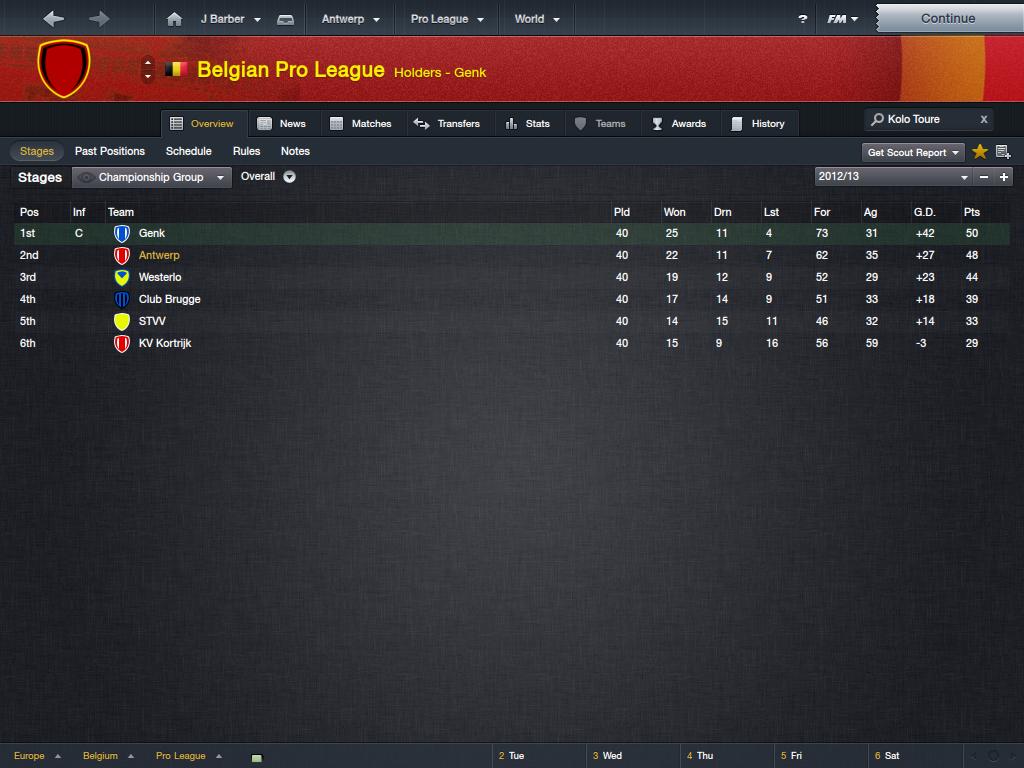 Our performances were much better this season than last season, I think this is because I switched it from a 4-1-2-1-2 to an attacking 4-4-2, with an AMR & AML so there were more bodies upfront to support and attack. The players which particularly impressed were Didier Yao, Centurion and Brnas, Didier Yao was voted Fans Player of the Year and rightly so, he was solid at the back for a 19 year old throughout the season. Centurion got the most assists in the league with 14. Brnas also did well, mid season he was a contender for top goal scored, but his form declined towards the end and managed a promising 17 goals.

General Comments
2 of my CBs, Viane and Van Dooren, have decided to call it a day and have retired, so I will need to bring in some more players. Yao, Brnas and Georgiev, the 3 players I brought in have all improved as players, mainly Yao and Brnas due to first team football while Georgiev has been in the U19s to get some experience under his belt, however, I do feel they would improve more as footballers if the board would grant my request of better training or youth facilities but they just can't find the funding, despite making £2.58M last season. Also, they announced the new budgets, which are better and we will be able to find better quality players now. 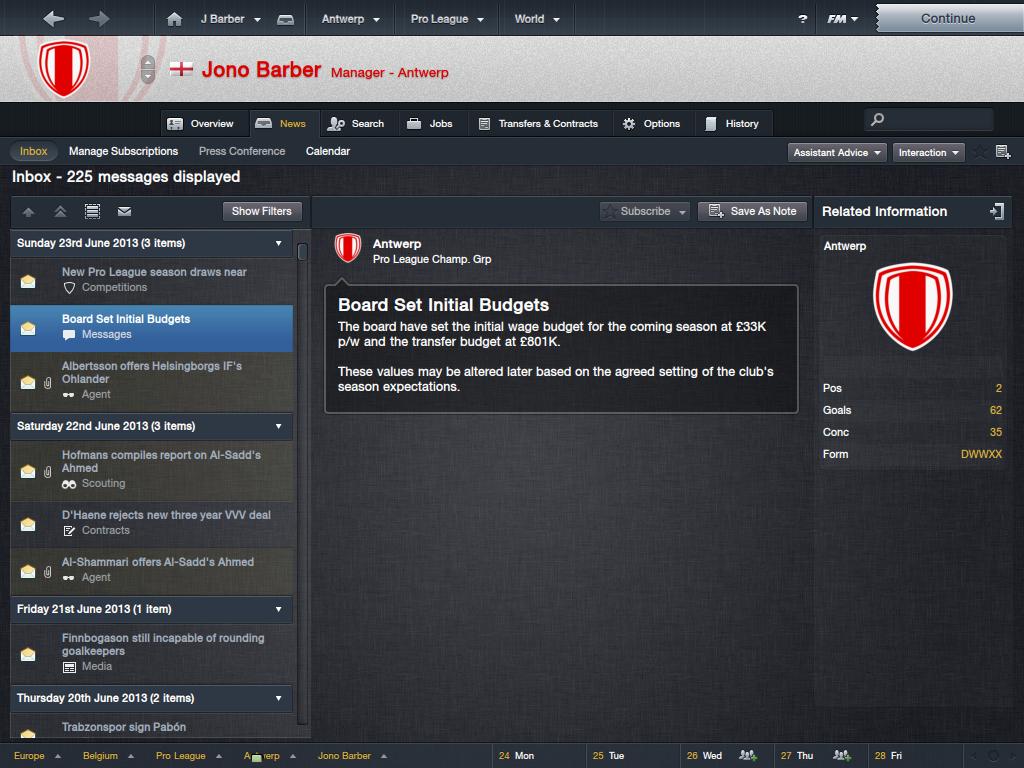 First of, sorry for the lack of these, I had to take a break from Antwerp after a lot of unsuccessful negotiations on transfers and contracts it became very stressful. These were the profits from last season, but the board still refuse to upgrade any facilities which is becoming annoying as it prevents me from attracting quality players. 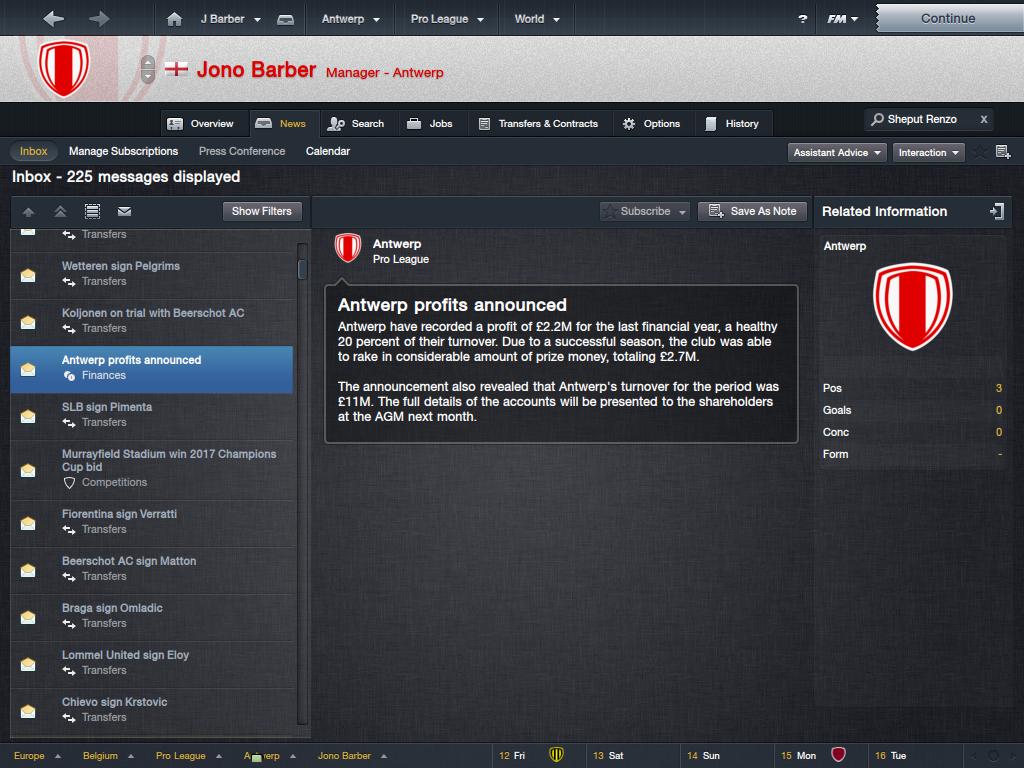 Akash
10 years
I know how you feel. Unsuccessful negotiations really stress you out, but I'm glad you continued.
Will you be getting Will Keane or/and Ryan Tunncilffe back to Belgium again, or some other new regen Manchester United has discovered?
Login to Quote 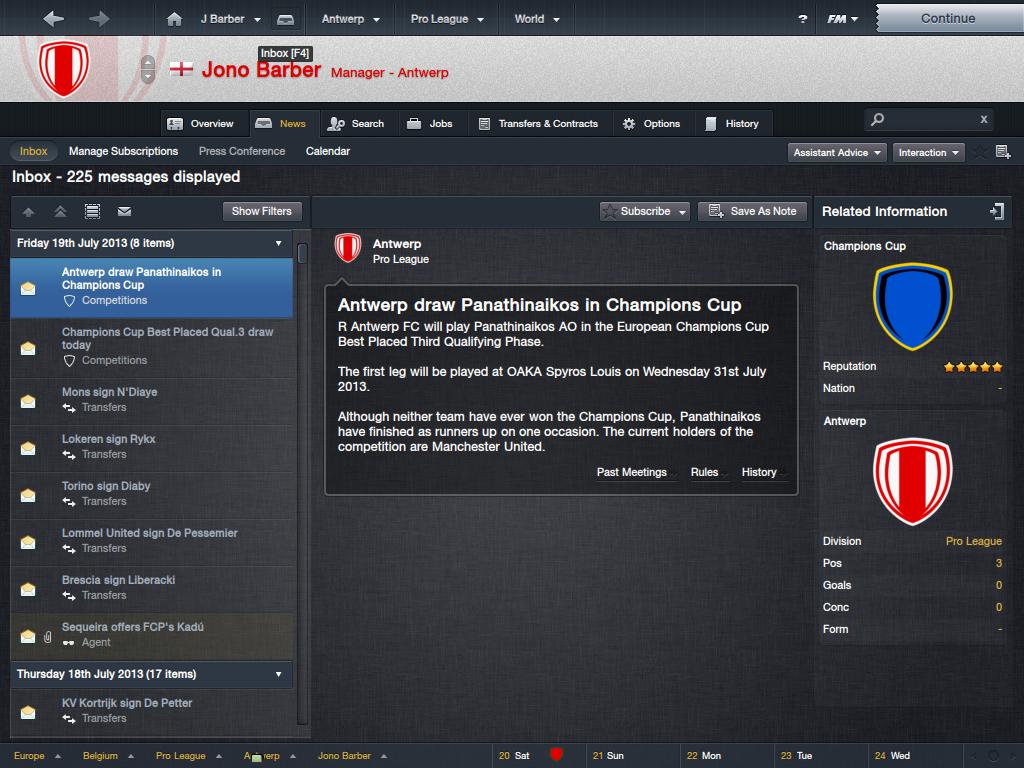 #59646 akash.vidyasagar : I know how you feel. Unsuccessful negotiations really stress you out, but I'm glad you continued.
Will you be getting Will Keane or/and Ryan Tunncilffe back to Belgium again, or some other new regen Manchester United has discovered?

I don't think I will be getting Will Keane back, he didn't really perform that well, managed 3 goals and 3 assists in 18 games I believe, in addition I'm also unsure about Tunnicliffe. I've had an injury regarding Wamfor, my main cm and if I can't get a replacement I will see if I can get Tunnicliffe back.
Login to Quote

The players I bought this season we're either players for the future or back up for the first team. Attracting quality players in there 20's in damn near impossible so I have to settle for young players, those nearing the end of their career, or those who aren't so good. The reasoning behind buying fullbacks is that Blay will probably be leaving at the end of this season and Chergui's is showing early signs his ability is on the decline. The players who went out, Dmitrijev and Banyon were now no longer in the first team plans, Dmitrijev wasn't providing good matches, and if he did he was inconsistent and Banyon just wasn't good enough, a club wanted him on loan till the end of the season and his contract runs out this year also and I have no plans to renew it. 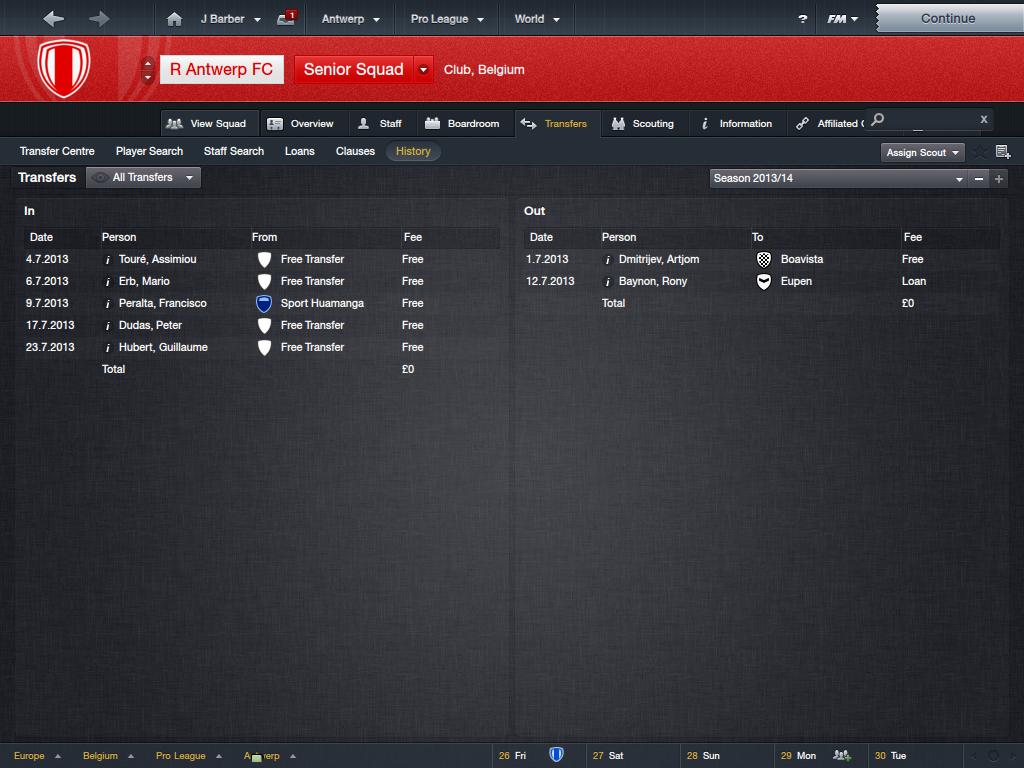 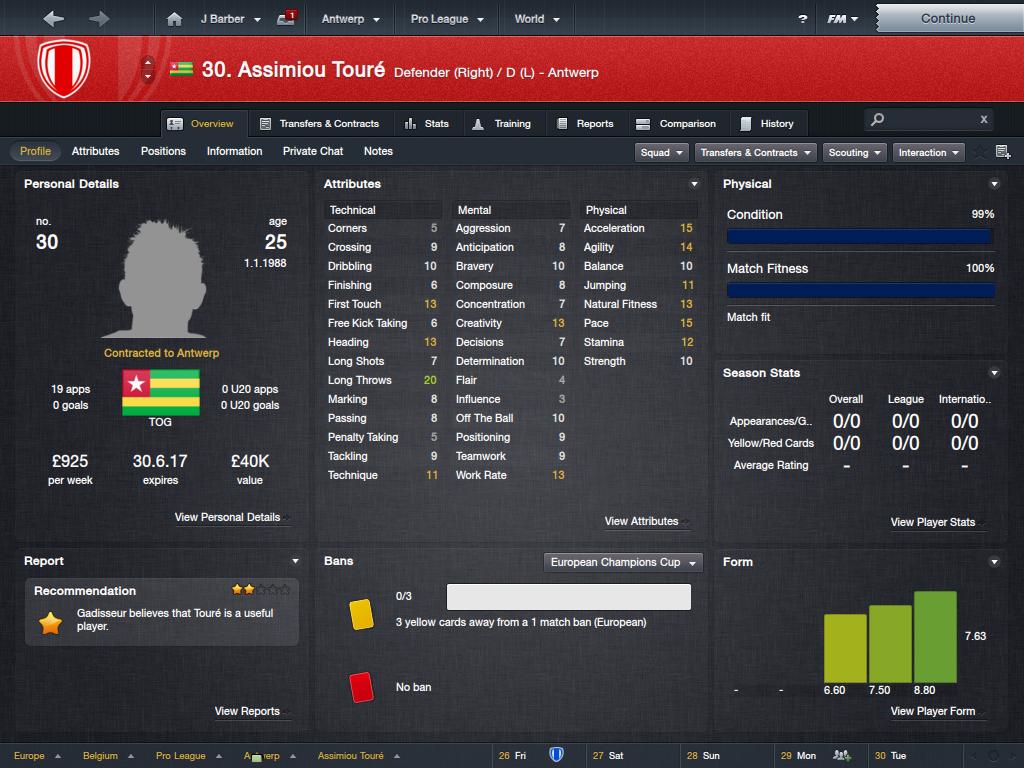 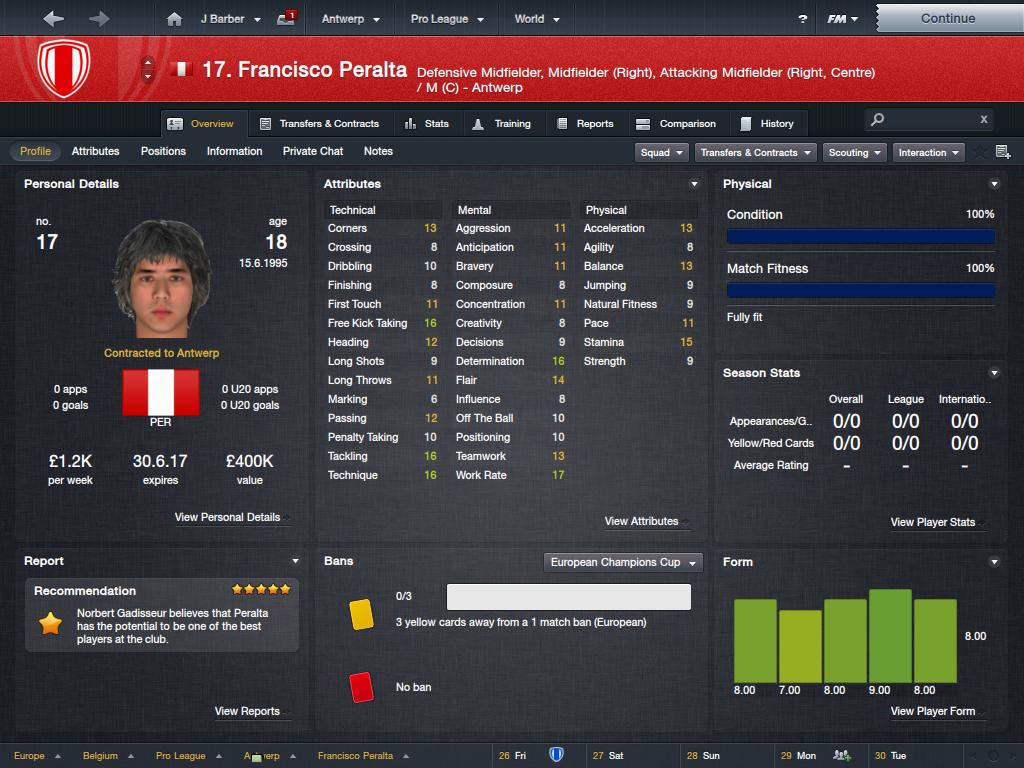 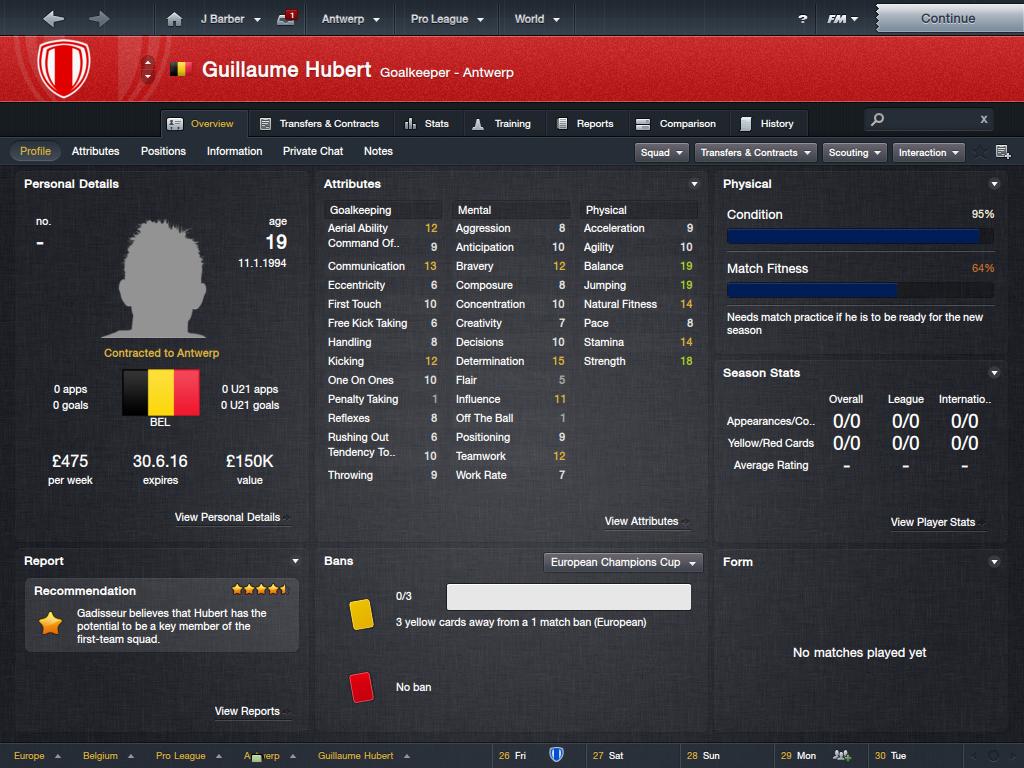 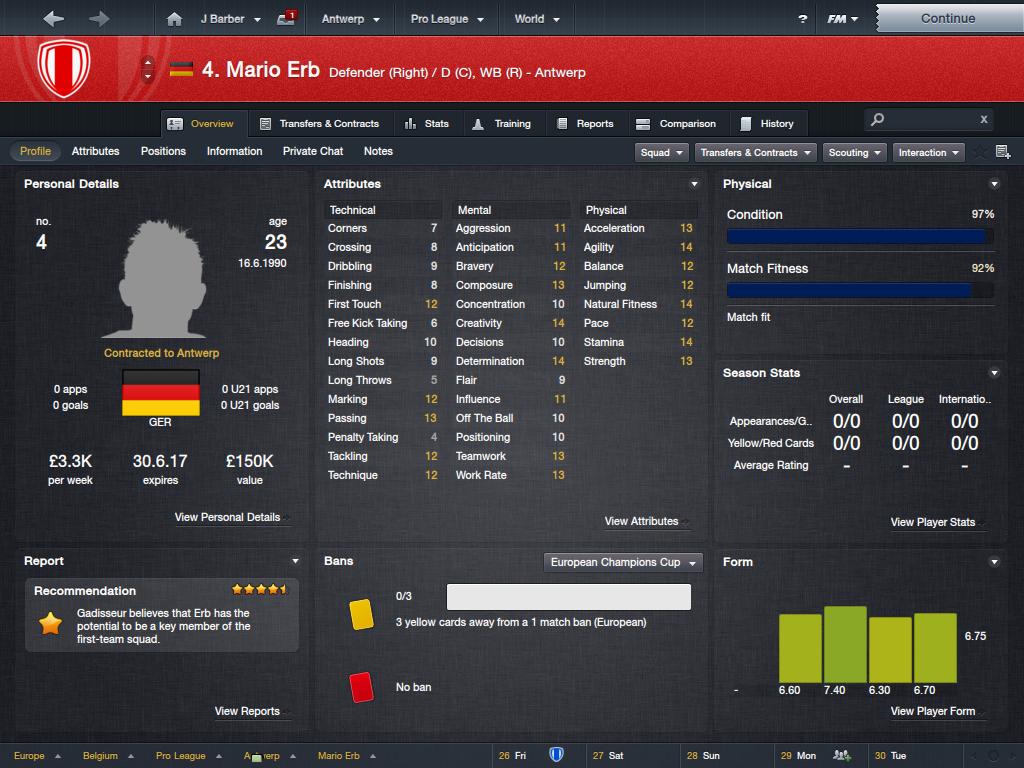 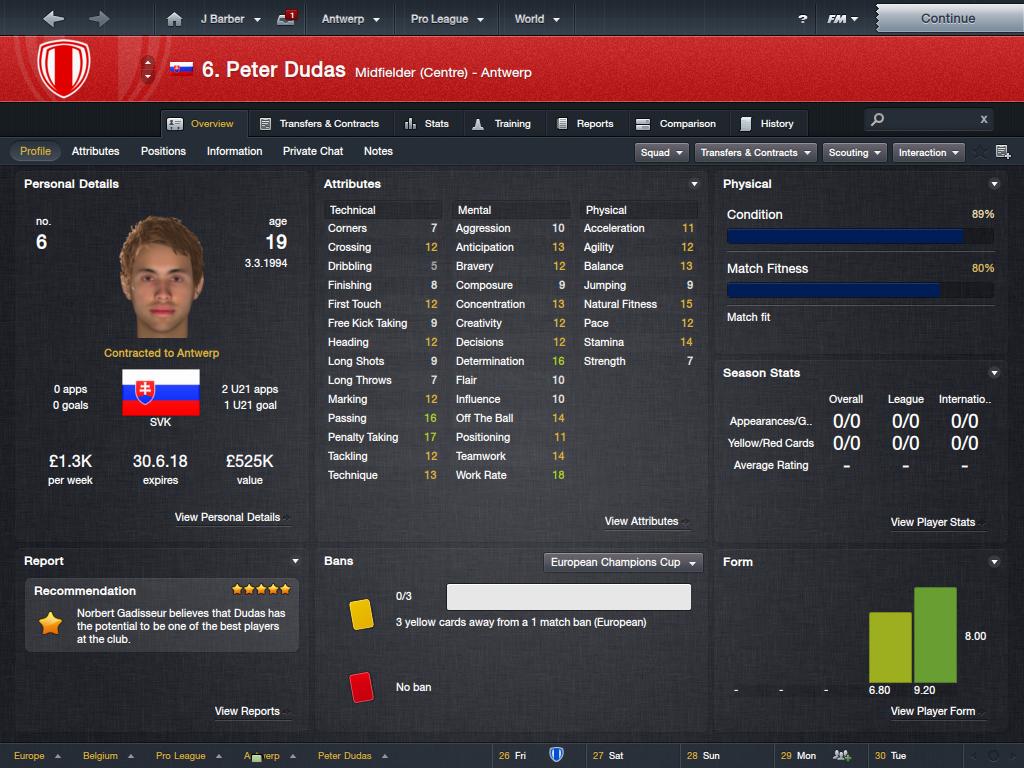 I have developed a lazy habit and now leave most of my pre-season games to my assistant, positive being it's quicker however the bad is that I can't see the players perform first-hand, I should probably stop doing this. The results were average, a disappointing 2-0 loss against Mons, but a 7-0 thrashing of Bilzen VV, which was to be expected in fairness. 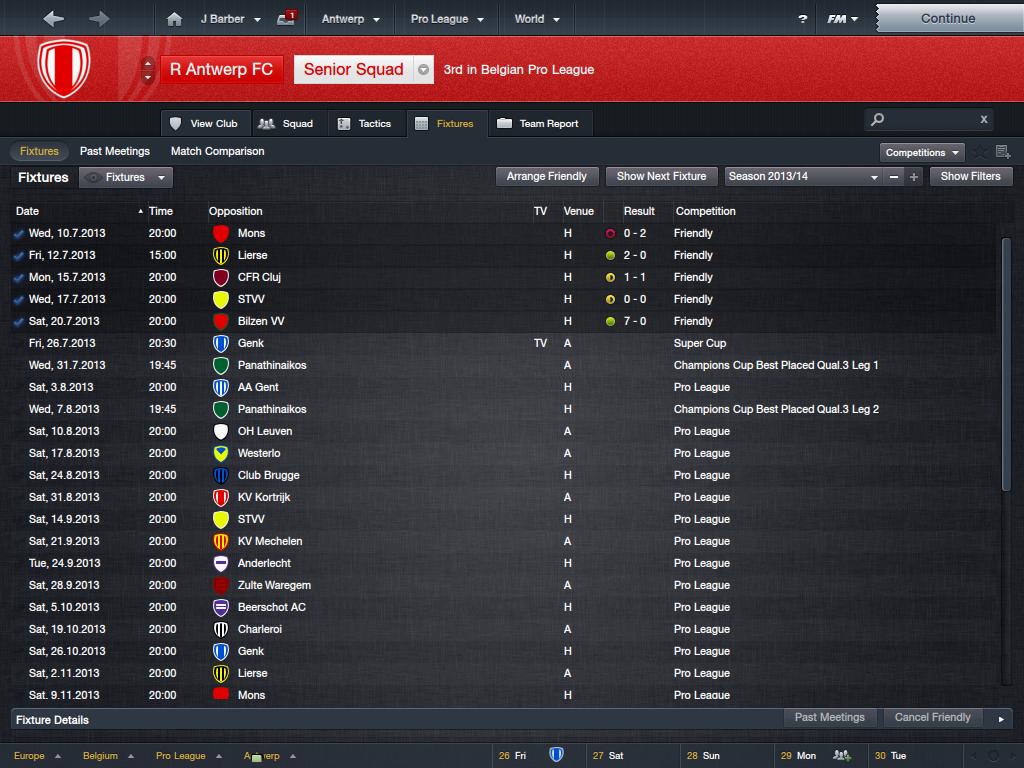 I haven't changed the tactics since last season, due to the success they gave us. I use the attacking 4-4-2 in games I expect to dominate and outscore the opponent and the 4-1-2-2-1 with a Trequartista for games where I'm the underdog. 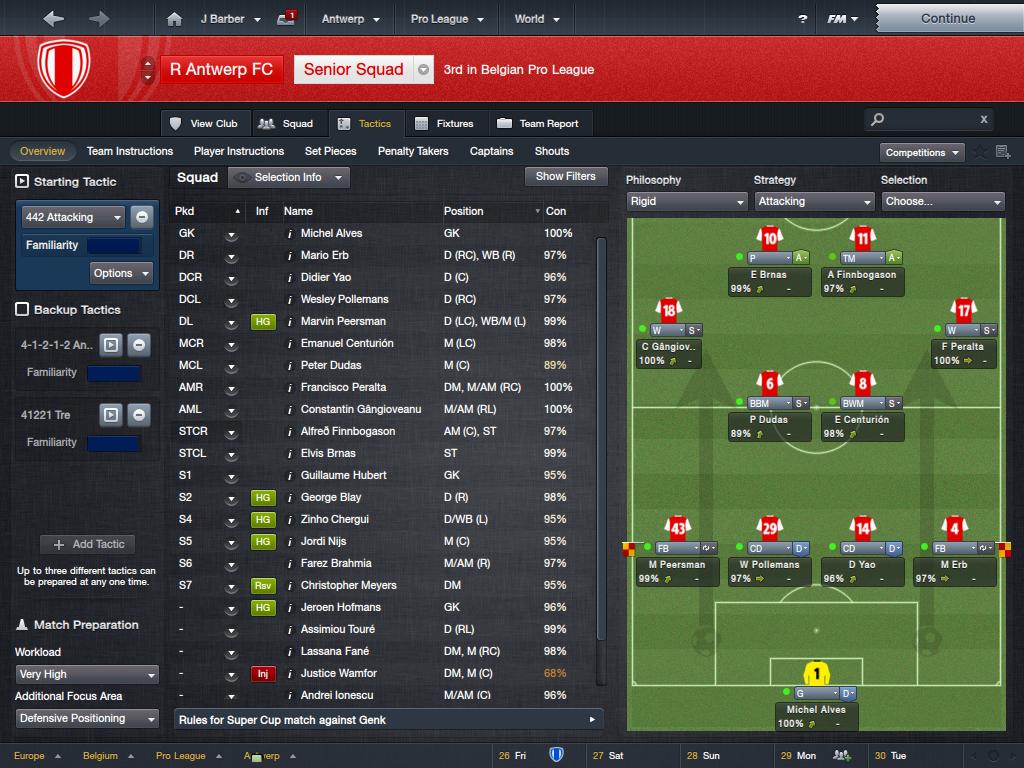 I don't have much else to say about this pre-season other than a couple more signings may be announced and we face Genk in the Belgian Supercup, not to be confused with the Belgian Cup.
Login to Quote

I feel we're going to have a very bad CL attempt this season and maybe the next as rules were not in my mind when making all the signings, I made a big mistake but we'll try to manage. Much expected defeat in the Belgian Supercup. You are reading "Antwerp - Welkom In De Hel Van Deurne-noord".