Bit late to be talking about him as the "next" anything! He's 27! Thanks anyway

Arvind
9 years
JOAWOW! Nice signing, although it must have been hard to part with 35m. Oh wait nvm you're a City fan

swag
9 years
Nice deal. I don't really think you paid too much on the transfer, more on the wage to be honest.
1
Login to Quote


I tried offering him less, but he wouldn't budge...again
Login to Quote

That's a terrible comeback. I would have expected the "Haha, you spent 35m on Carroll."

That's a terrible comeback. I would have expected the "Haha, you spent 35m on Carroll."

That's what I meant

"Now Nick has left there is nothing to stop me from banning you from chat" hahaha quality.
Login to Quote

AlexSonwild
9 years
Great story m8. As a City fan, I really hope to see United back in Europa League 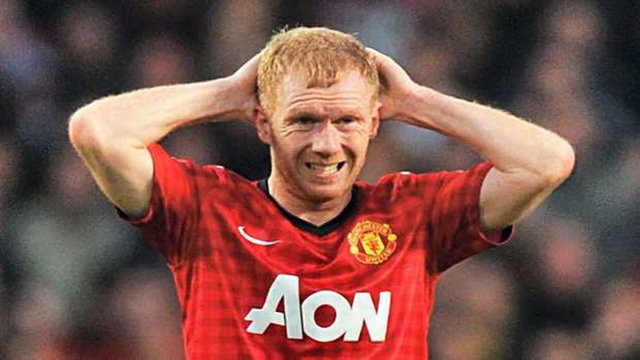 Manchester United midfielder Paul Scholes has announced he intends to retire from professional football at the end of the current season. The 39-year-old has spent his entire career at Old Trafford, although retired before for six months, before making his comeback in a Manchester derby in the 2011-12 season.

His retirement in 2014 will mean he has spent a monumental 21 years at Old Trafford, which is just shy of Maldini's 24 years at Milan, but is an impressive record none-the-less. Following the arrival of Joao Moutinho the quality of central midfield has improved dramatically, and as United have other quality players in the middle of the park such as Yann M'Vila and Gary Medel, first-team opportunities will be almost non-existent for Scholes. Rather than take up wages at the club, he has decided it would probably be best to call time on his career, although he will never be forgotten by the Red Devils' fans. It is rumoured United are poised to offer him a staff role when he does retire to keep him at the club and to please the fans.

This news will come as a blow to the United fans, as it comes just a week after the news that veterans Ryan Giggs and Rio Ferdinand also plan to retire at the end of the season. Apparently the trio will all be offered post-retirement roles at the club.
Login to Quote

Nice update though, keep it up!
Login to Quote

I hope it doesn't have any impact on your performance. Good Luck

as a replacement for him you can always check out guys like rabiot or goretzka. But then again you have m'vila
Login to Quote

I hope it doesn't have any impact on your performance. Good Luck

Not likely, they were never going to play!
Login to Quote