JasonRM
7 years
http://i46.tinypic.com/r2s1u8.jpg
Sky Sports here, We interrupt your daily half time report for Match of the Day as there have been confirmed reports that Diego Maradona has had a 2.6 million pound deal for young Turkish Attacking Midfielder Muhammed Demirci accepted. The Atletico Madrid head coach has focused on youth by signing no player under under 18. Demirci's profile is posted below.

Jer
7 years
Nice wonderkid! Ask Turan to help him out!
Login to Quote

JasonRM
7 years
I will Pauker. Thanks for the advice

JasonRM
7 years
Right-back Silvio has returned to full training. He will be first choice in the crucial game against Betis coming up in a week.

JasonRM
7 years
We have drawn Sabadell in the Copa Del Rey. They are a Liga Adelante side (spanish version of championship)

JasonRM
7 years
Attacking Center Midfielder Arda Turan has returned from his month long injury. He will now be first choice at AMC and will tutor Muhammed Demirci.

J: So Diego, why did you call us here?

DM: We all are here as Jeremy and myself are going to announce big news for both our clubs.

JP: *Italian accent* Excuze mes, we are here to announce that A.C. Siena and Atletico’s Madrid are announcing an affiliation between these two teams.

DM: Let me take it from here Jeremy, we will host two games annually. We will be playing two friendlies during the pre-season every year and with Pauker's ambition to take Siena to the top. It had to be done.

J: What if Pauker's accomplishments of taking Siena to the top fails, what would happen to this affiliation?

DM: Man, I wouldn't doubt Pauker's manager skills as he barely lost any matches as Siena boss. Plus, we will be helpful in any ways to Siena.

JP: Let me take this one Diego, the pre-season friendly match is to show our new signings from the January transfer window and the summer transfer window.

J: So, with two friendlies taking place, where are this matches going to be played at?

JP: We will take turns at the Vicente Calderon and the Artemio Franchi.

J: Considering Siena's current financial state, who are the gate receipts going to?

DM: The gate receipts will be given to start a new youth academy in Siena and in Madrid, for young kids to use.

J: Thanks, that would be all.

DM and JP: Thank you all!

*A roar of claps from the journalists.*

JasonRM
7 years
Credit to OR fr the pic :D.
Login to Quote

The FM Rookie
7 years
I wish you the greatest of luck with this idea. It was a great one for me and Or and I'm sure it will be a great one for you two. LONG LIVE THE BOND BETWEEN SIENA AND MADRID!!
Login to Quote

JasonRM
7 years
This month was full of ups and downs. We had 3 La Liga Matches, a 2 Europa Leauge Matches, and a Copa del Rey match.

Our first fixture this month was against Levante. The game was fairly even going into half time. In the 50th minute though, Levante hit a harmless cross into the box but Coutios fell awkardly on the ball and scored an own goal. The game would end 1-0. We had 15 shots and 45% possesion. The next game this month was Europa Leauge, against Academia. They were not in good form and Falcao romped all over them with a hattrick before halftime. Filipe and Daniel Diaz, both defenders, chipped in with a goal each. The game ended 5-2. We had 22 shots and 57% possession. 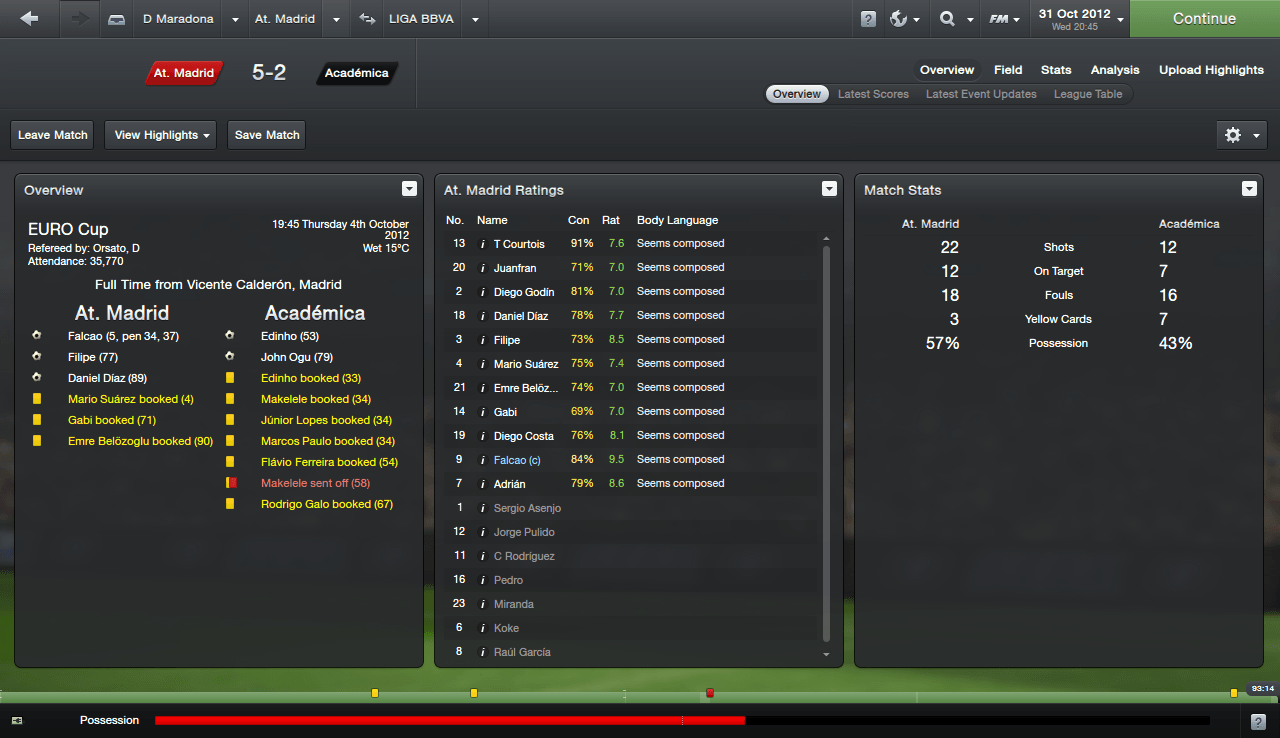 The third game this month was a crucial match against Athletic Bilbao in La Liga. We never got going. In the 42nd minute Jon Auxtenetxe put one past courtois from just inside the box. Bilbao had a player sent off on half time, but all we did is give up a Mikel San Jose goal. The game ended 2-0. We had 6 shots and 45% possession. Our 4th game this month was against Real Betis in a crucial game where we needed 3 points. The boys did their jobs and put 5 past the keeper while only giving up one in the back. Falcao once again had a hattrick and Mario Suarez and Raul Garcia scored goals of their own. We had 19 shots and 45% possession. Our next game was against Panathiniakos (phew)in a Europa League Match. Another spell of dominance has we won our third straight Europa League game. The game started off slow until Falco scored a goal in the 37th minutem, soon to be followed by a Filipe goal in the 45th minute. In the 72nd minute, Arda Turan gave the game it's final goal. An interesting statistic, we have scored 14 goals but have given up just 2 in the Europa League. Our 6th game, and last La Liga match this month was against Osuana and was a hugely disappointing fixture. The only goal was a Paxal Punal penalty in the 41st minute. We had 14 shots and 50% possession. Our final match this month was a bore draw in the Copa Del Rey against Liga Adelante side Sabadell. It was an awful game that we just did not show up for. No goals were scored, but I'm confident some will be in the return leg in Madrid. We had 13 shots and 51% possession.

Miranda has requested a transfer. The center back was not getting a lot of playing time and he though that a move out of Madrid was the right choice. His request has been granted. Here is the La Liga table through 9 games. We are 6th in the table with only 15 out of a possible 27 points. Our player of the month is Falcao. The Colombian native scored 7 goals in 7 games and had a 7.58 match rating on the season in La Liga.

At. Madrid has formed a link with Siena and their manager Jeremy Pauker.

Jeremy has done an excellent job with Siena and has led them to 13th place so far. That is exceptionally good considering Siena's financial status. His 3-1 win against Parma was fantastic and the football Pauker's team was playing was a joy to watch.

That was an excerpt of an interview I had with Sky Sports about the link with Siena.
Login to Quote

JasonRM
7 years
Even if it's just a little Jer
7 years
Wow, tough month, but you will do better! Plus, you can see a press conference with Jeremy Pauker about his thoughts of Diego Maradona and their affiliation! http://www.fmscout.com/t-76036-Siena-The-New-Kings-of-Italy.html#76036
Login to Quote

The Tinkerman
7 years
Really enjoying this story, best of luck with everything.

Fining Falcao a weeks wages had me laughing - brilliant!!
Login to Quote