JasonRM
9 years
It certainly got him in-form!

JasonRM
9 years
Sorry there has been no update guys. I have been really busy

I just cannot believe it. They give me no money, and then this.

Jer
9 years
Unlucky, and you will get a better job

JasonRM
9 years
To respond to Pauker, I will get a better job. First in Russia,

The Zenit coach went to At. Madrid

JasonRM
9 years
I arrived at Zenit and I was immediately impressed by the stature of the facilities and the professionalism of the directors. It was different from Madrid, definitely. The board provided me with a bio of the club. 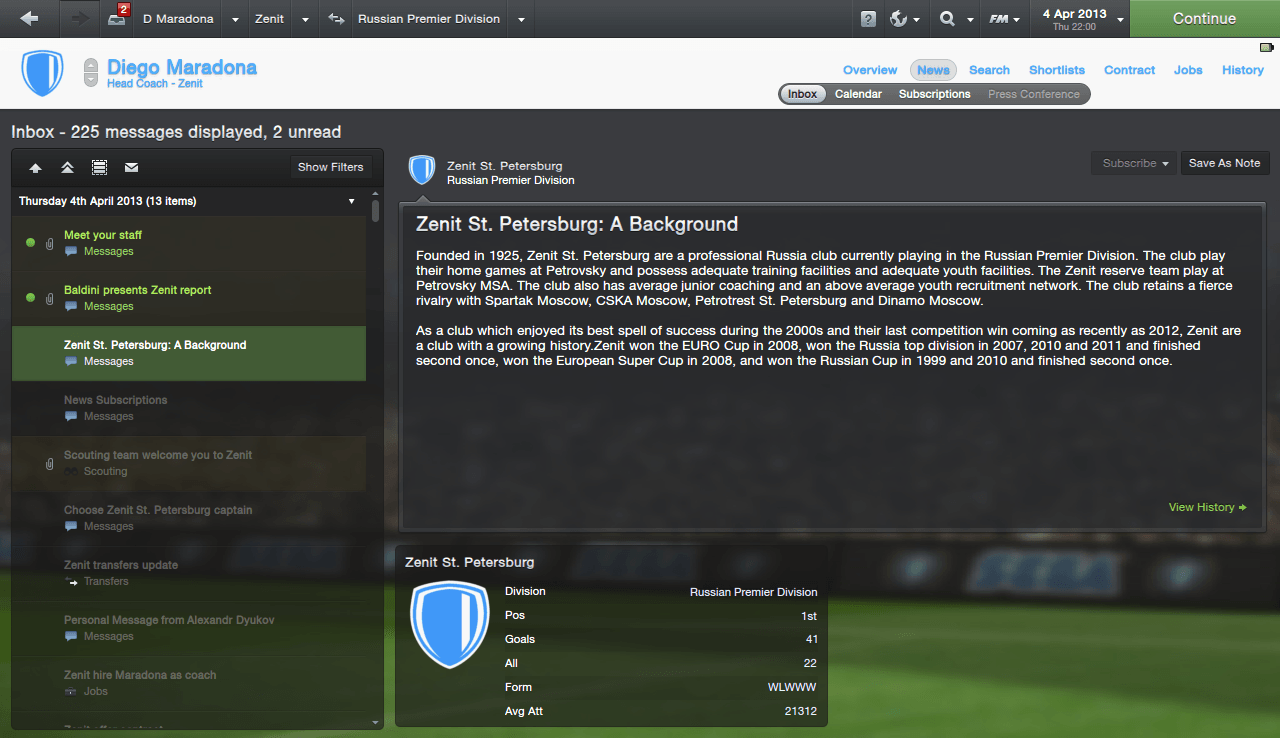 Here is the team report. The left back is very impressive, Criscito is the name. Nothing can get passed him and he attacks with pace. Very nice indeed. 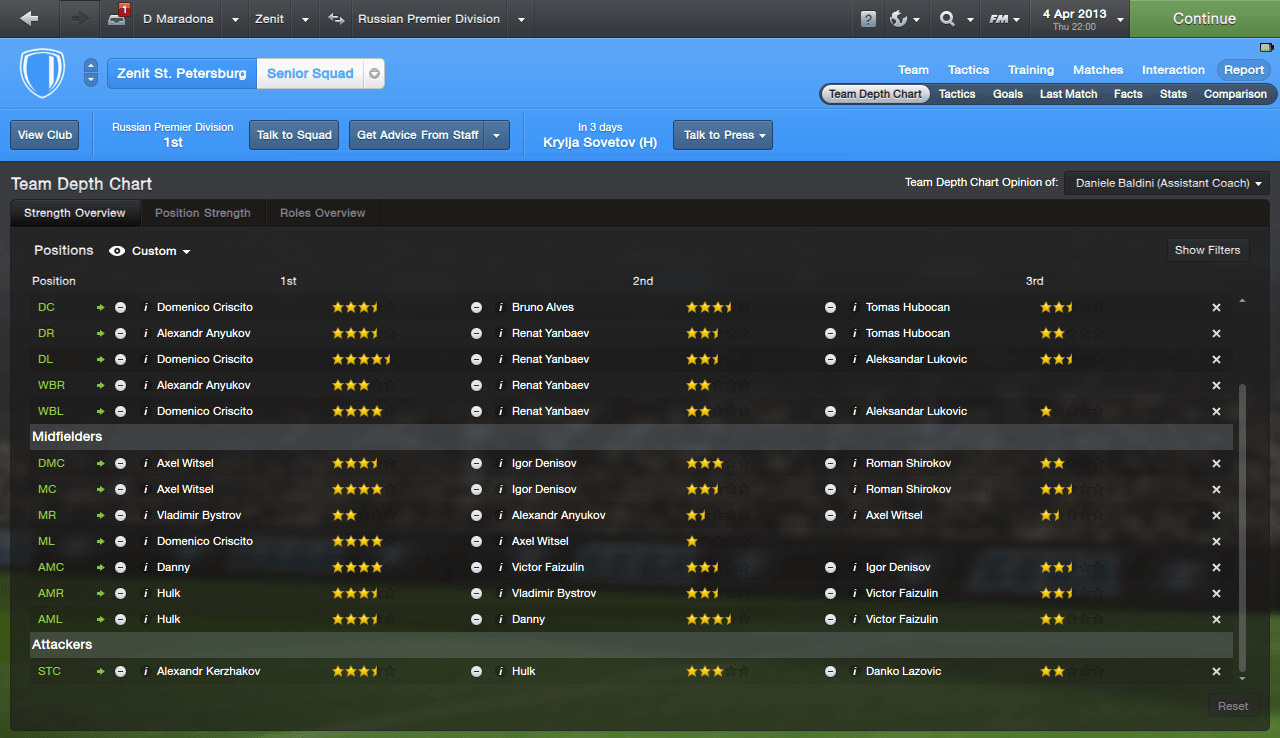 At youth training, one of the prospects, Pometsko caught my eye immediately. I've seen Messi, and this boy looked like a mini version of him. His technique and passing ability is incredible, and his dribbling rivals anybody his age. Just fabulous. WOW 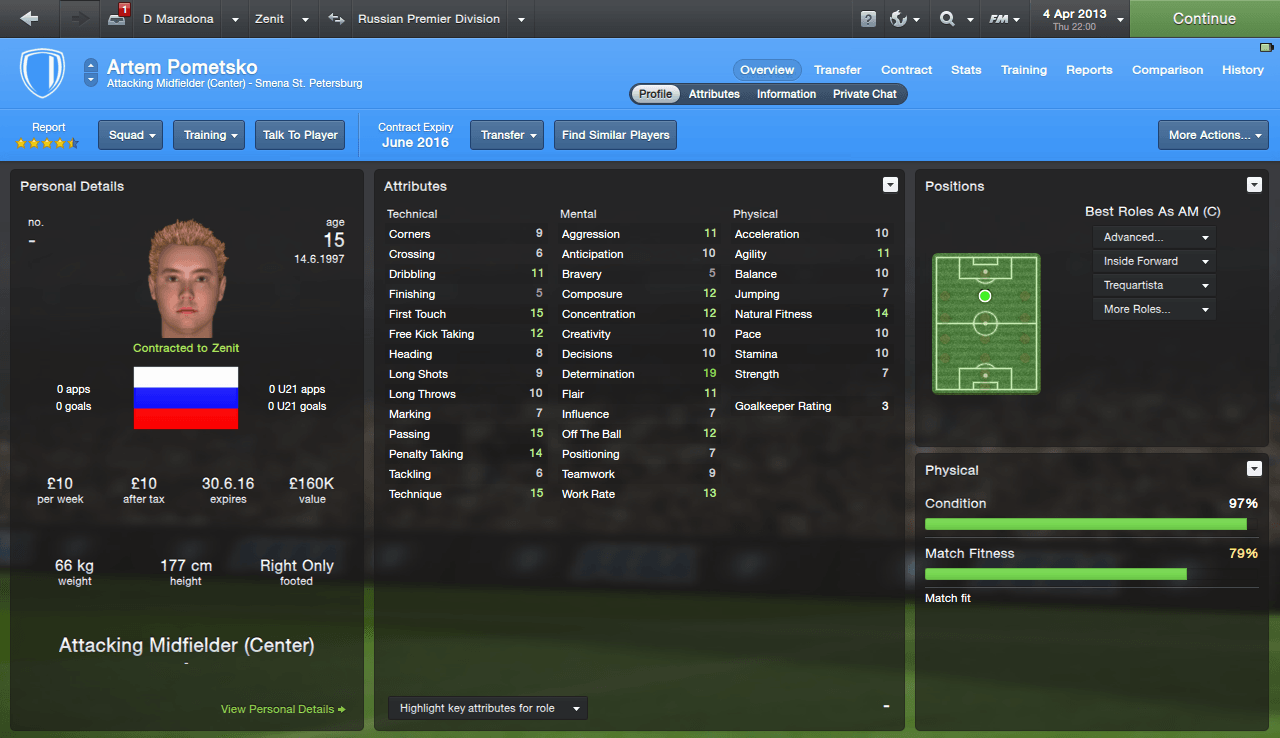 Another one of the prospects is listed below. 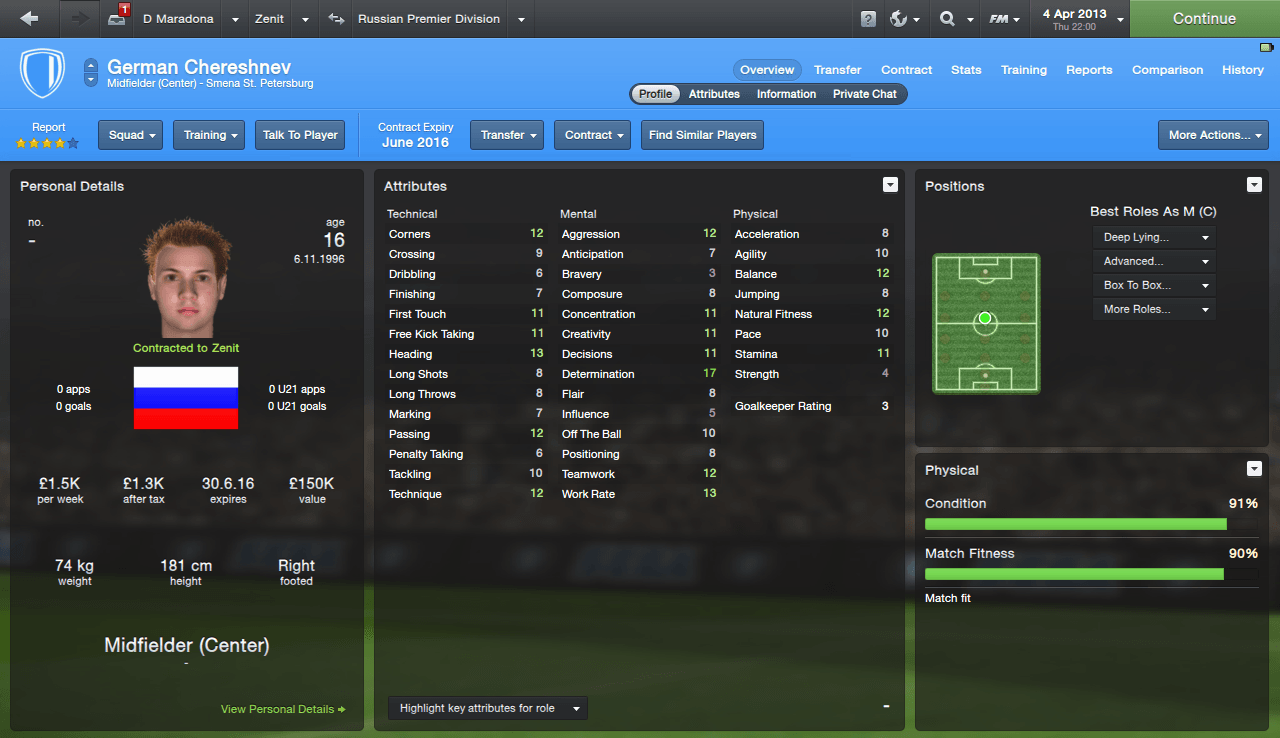 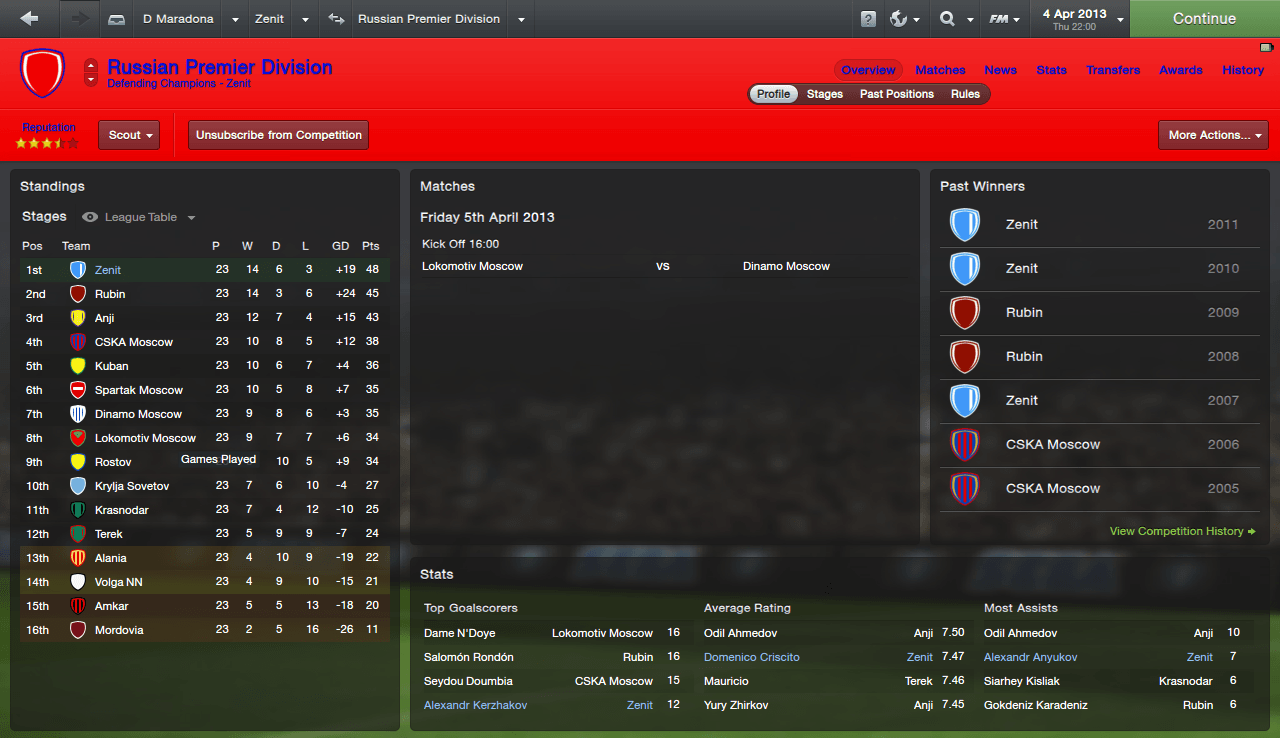 The tactic I will use primarily will be a 4-5-1. The same formation that Barca uses. I hope to soon beat them at their own game. 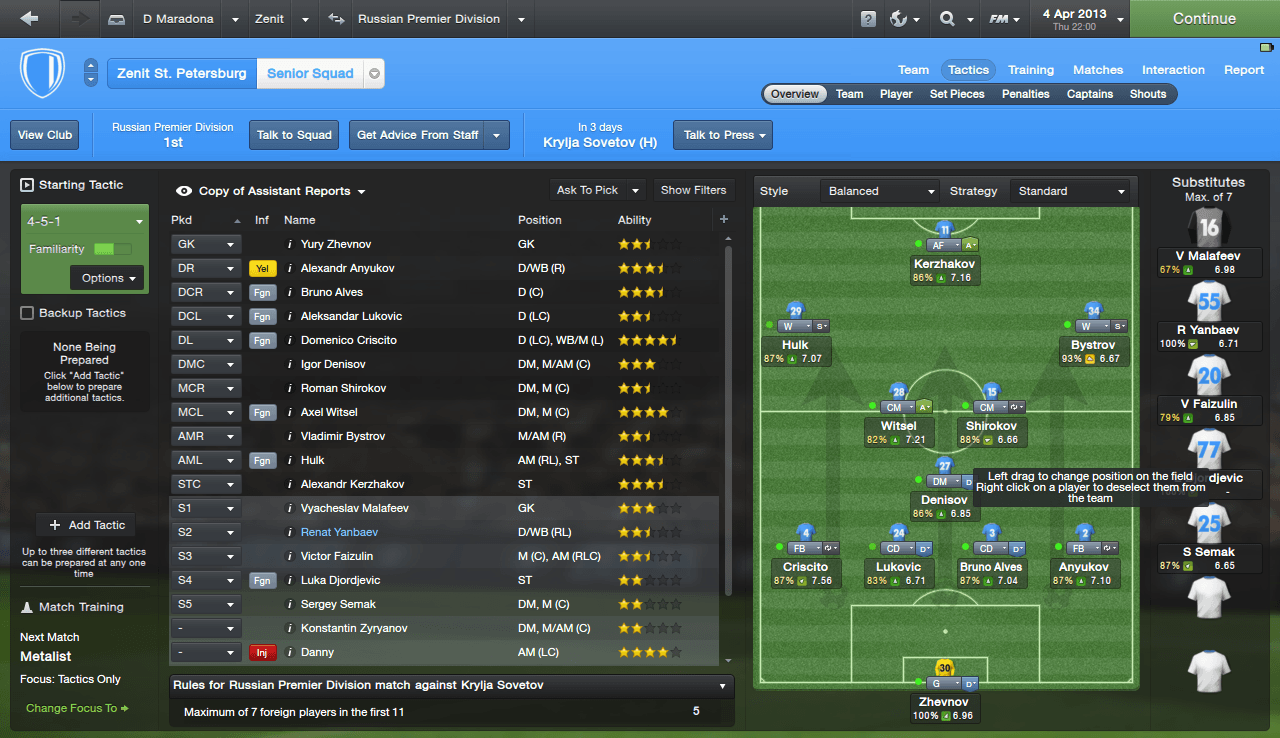 JasonRM
9 years • Edited
http://i46.tinypic.com/r2s1u8.jpg
We've just learned that Wellington Nem, who moved to PSG last Summer, has been snapped up by Russian Side Zenit St. Petersburg. Nem was transfer listed after his request for first team football was denied. 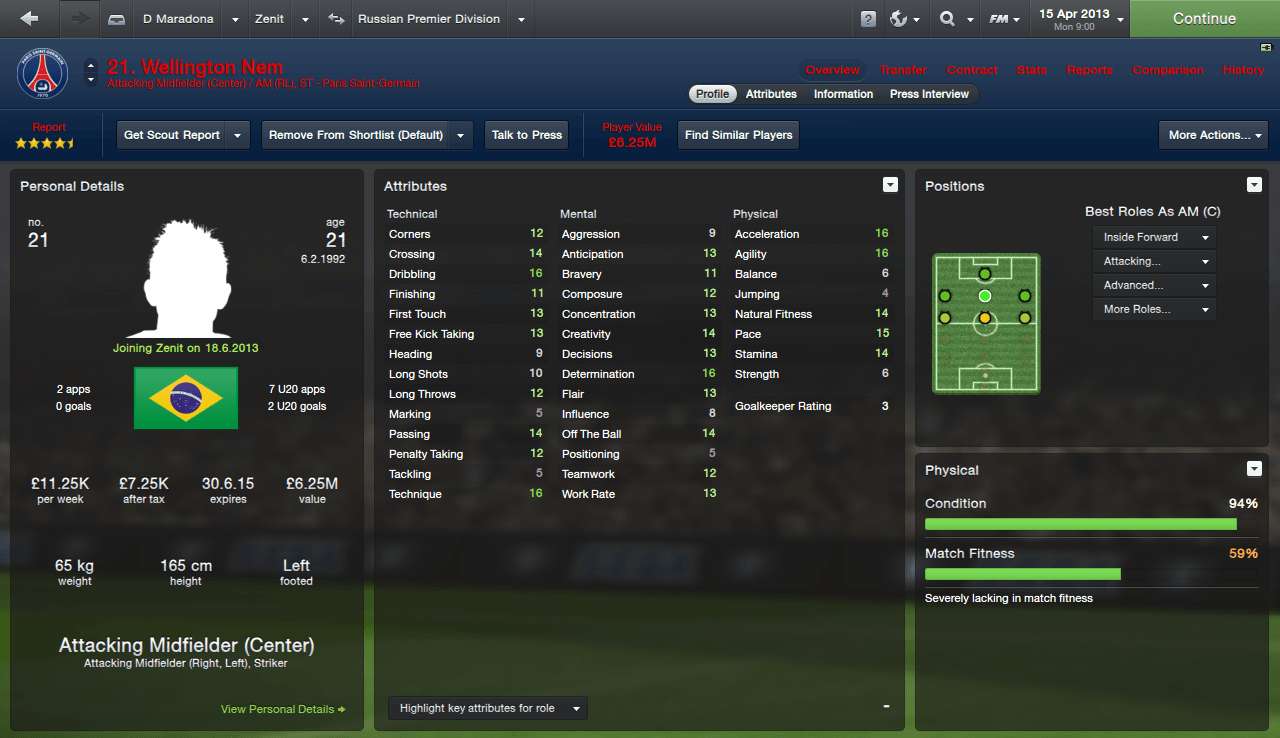 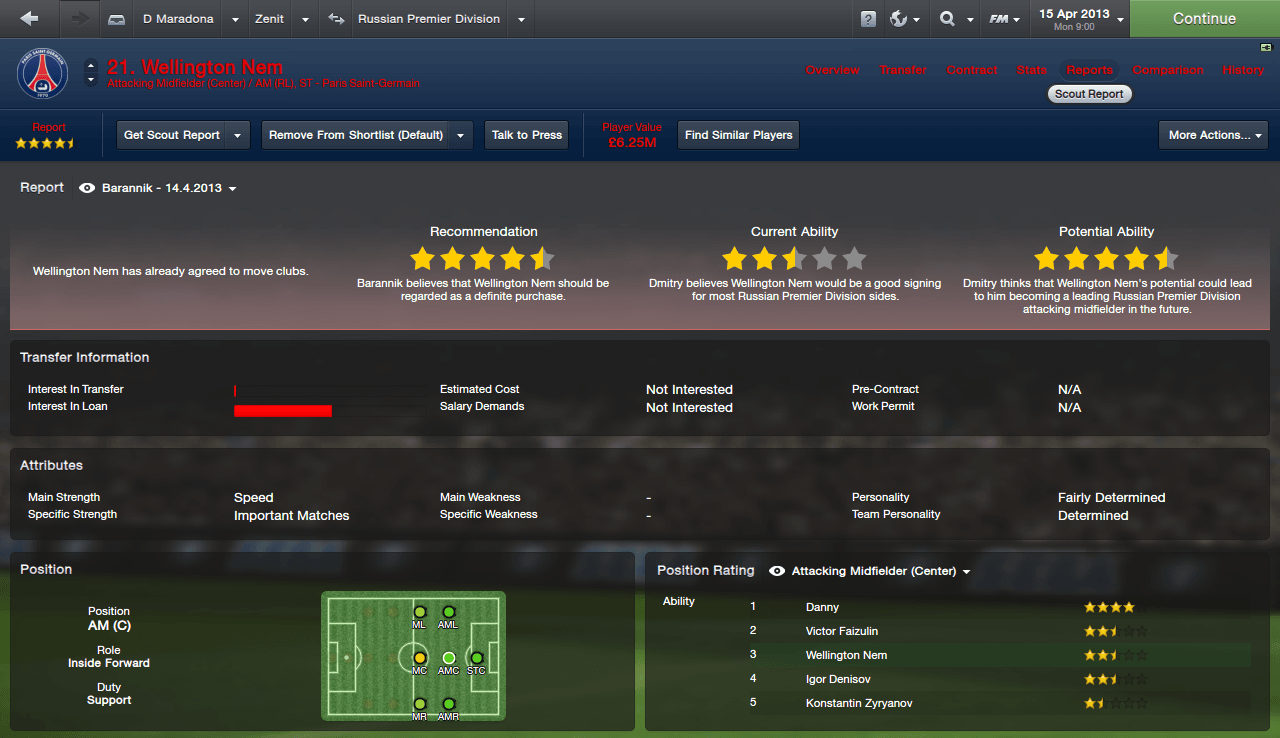 My first month at Zenit started fantastic but had a lackluster finish. We had 4 Russian Premier League games, 2 Europa League games, and a Russian Cup Game.

My first game in charge was against Krylja Sovetov. The first goal in my tenure came in the 7th minute when Lukovic slotted it past the keeper. The 2nd and last goal came in the 86th minute when Kerzhakov scored on a breakaway. We dominated the match and had 56% possession and 28 shots. 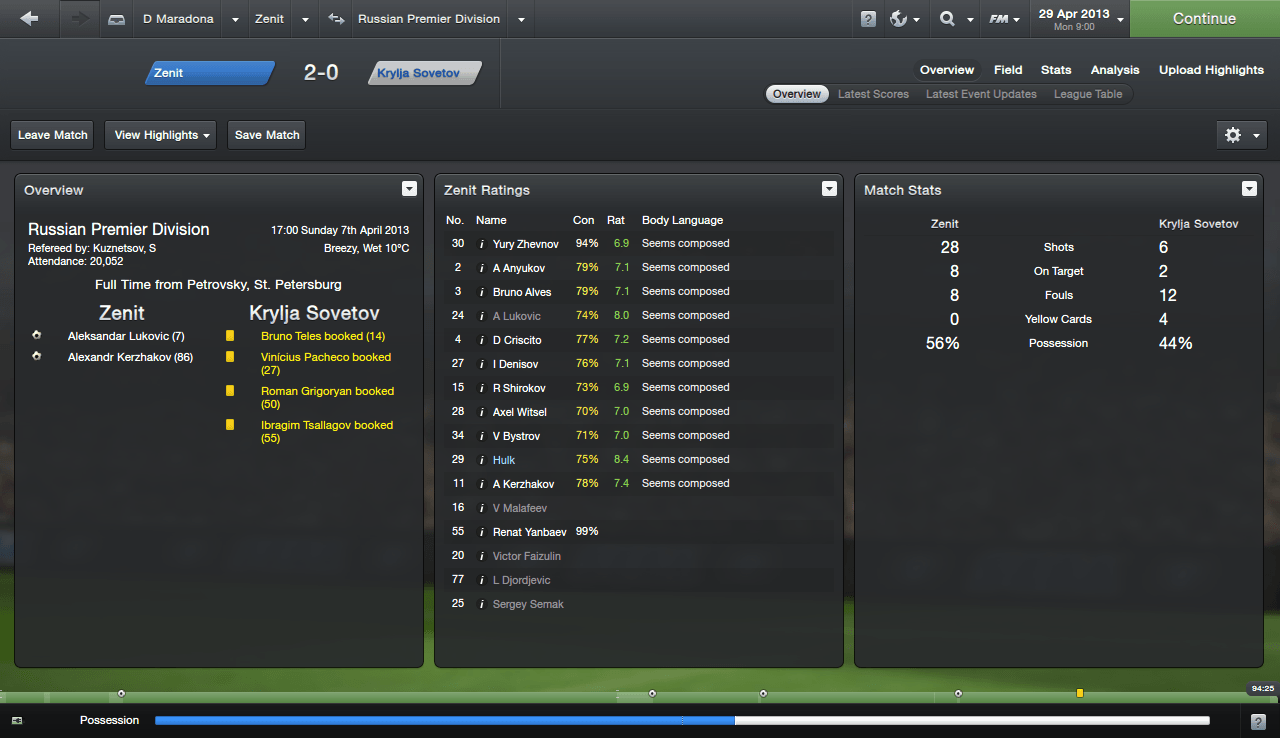 The next game was against Metalist in the Europa league. My predecessor already gave me a 3-2 lead and all we didn't need much to go through at home. The game was relatively boring, Kerzhakov scored the only goal in the 86th minute once more. We had 56& possession and 22 shots and we went through to play Schalke in the semis. The series ended 4-2 on aggregate. 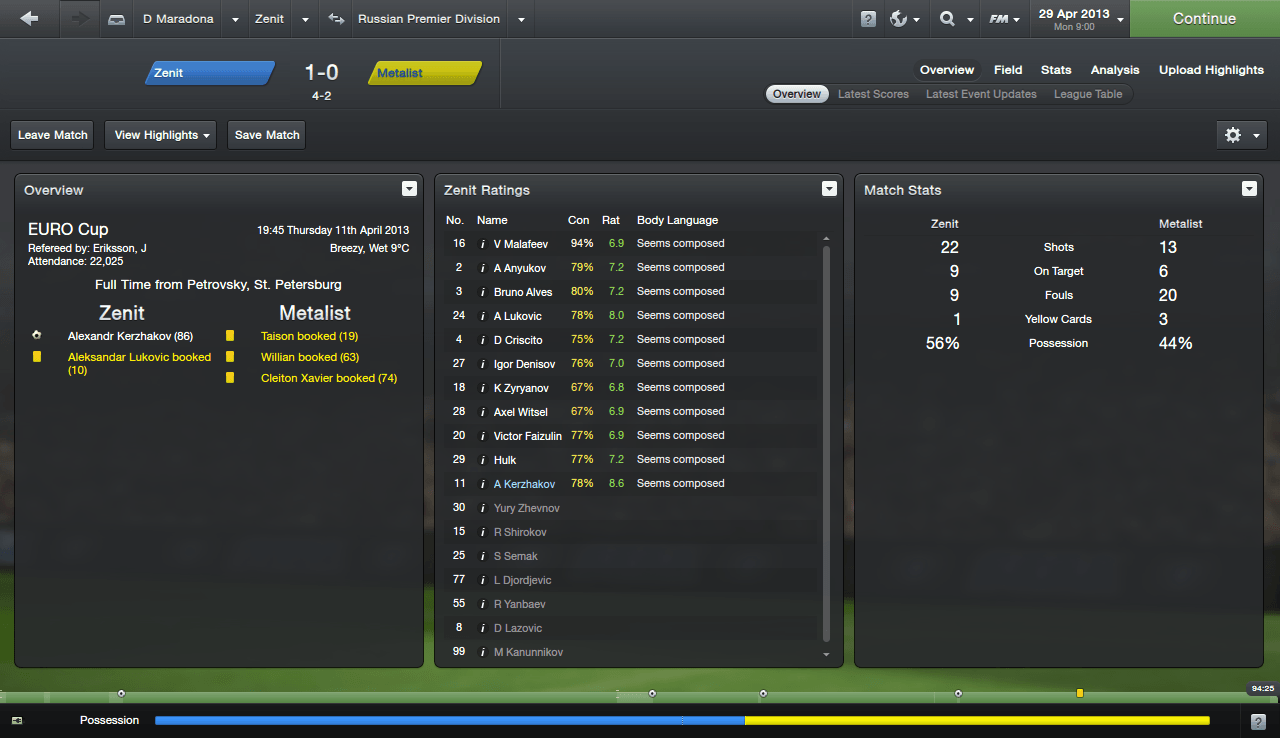 Our third game was against Terek and it was a massacre. 7 goals were put behind their keeper, Hulk was responsible for 4 of those goals while Kerzhakov scored a hat trick. Hulk ended the game with a 9.9 match rating. We had 23 shots and 51% possession. 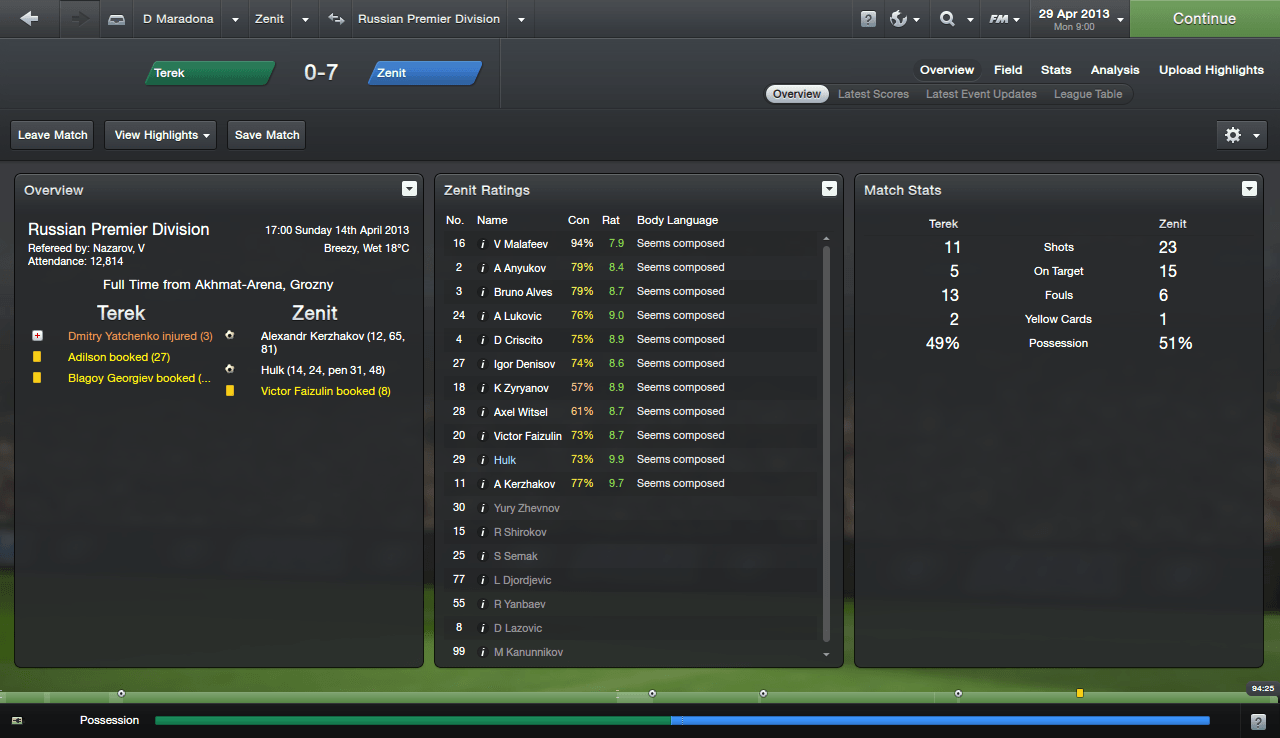 Our 4th game this month was against Ural in the Russian Cup quaterfinals. We were very comfortable in possession from the beginning and 2 strikes in the 12th and 16th minute were enough to get us through to the semis against CSKA Moscow. Hullk and Kerzhakov scored the goals. We had the ball 70% percent of the time and we had had 17 shots. 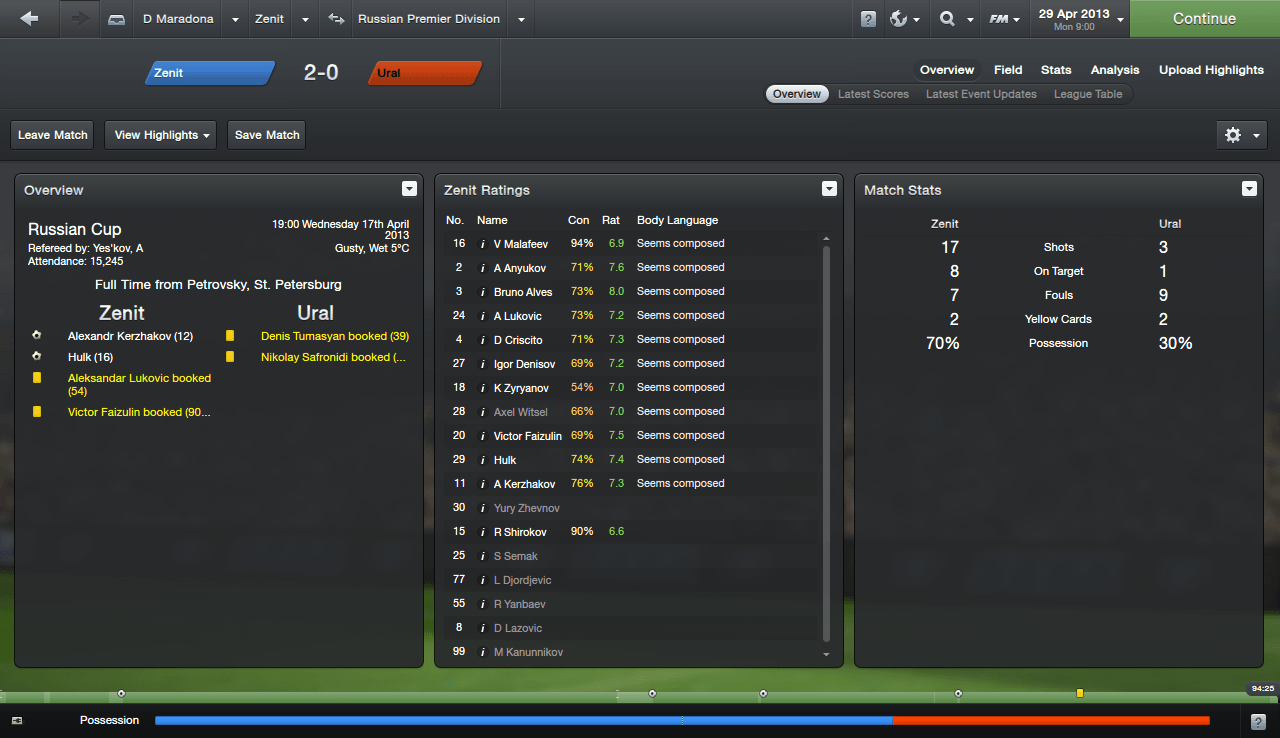 Here, we started to falter. THe game was in the Russian Premier League against Lokomotiv Moscow and was a pretty boring game and we just could not finish, besides for 1 goal. The goal came in the 64th minute by Kerzhakov, it followed a 23rd minute N'Doye Goal from Moscow. WE had the ball 57% of the time and 16 shots. 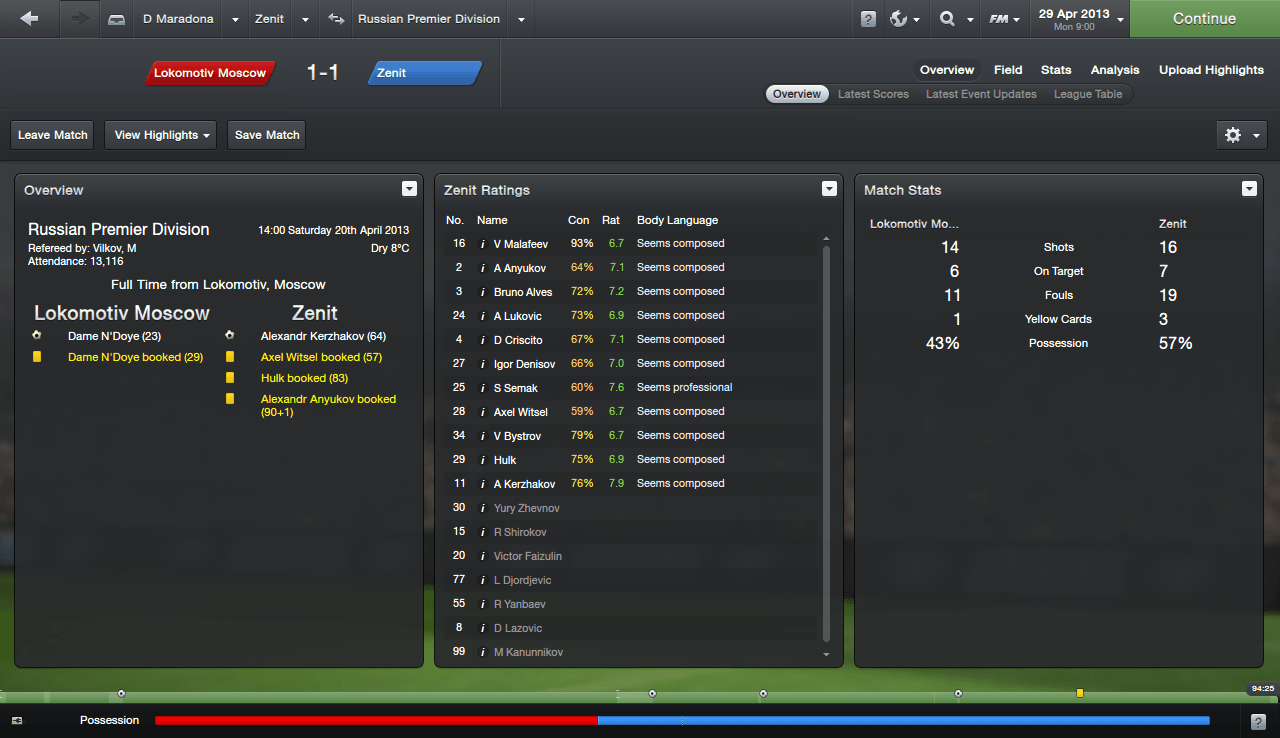 The 6th game this month was the 1st leg of Europa Leauge semifinal match against Schalke and we just never got going. The game was a big disappointing and was my first loss at Zenit. Joel Matip beat our keeper in the 3rd minute while Pilatsikas put a 2nd in during the 88th minute. We had 56% possession and 11 shots. 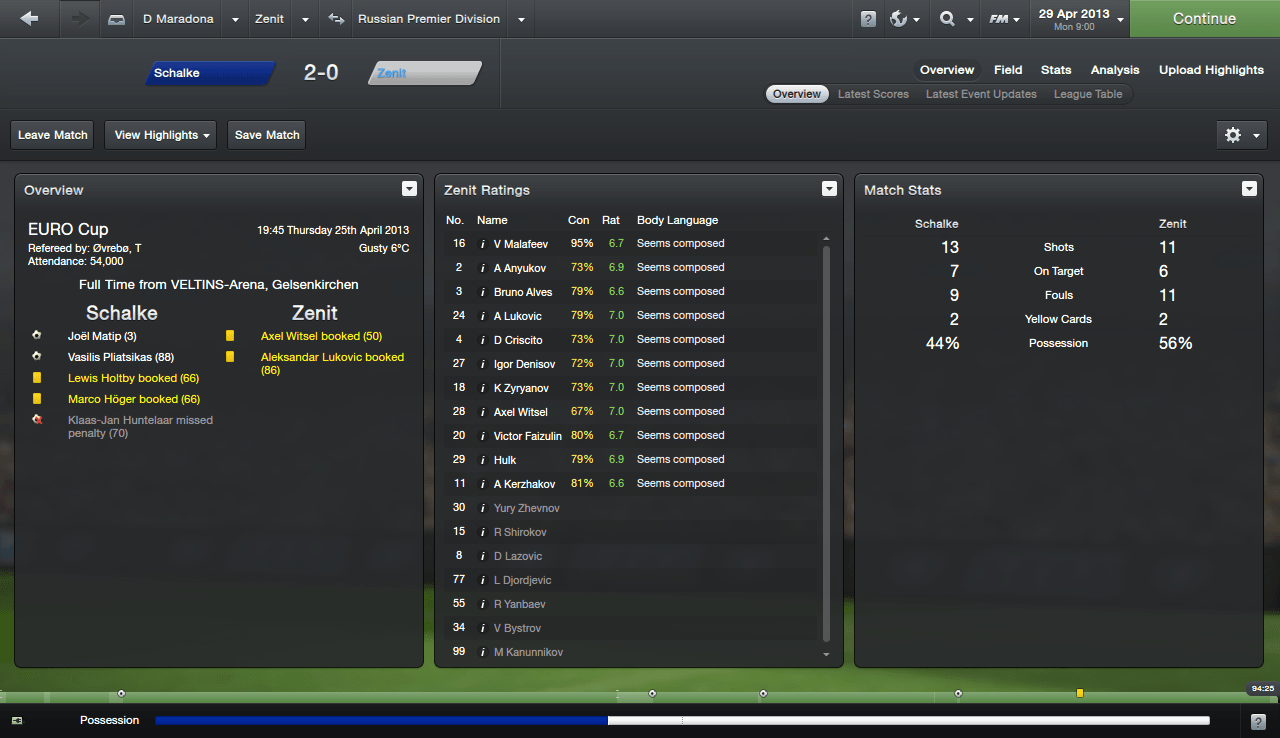 Our final game this month was against Dinamo Moscow at home. Again, an unstatisfactory result. The first goal of the game was in the 9th minute when Hulk put one past the keeper. The 2nd goal was a powerful finish from Kevin Kuranyi in the 48th minute. We made it 2-1 in the 56th minute with a Bystrov goal but our hopes of 3 points were shattered by a 71st minute goal by Omar Bakkal. We had control of the ball 54% of the time and we had 15 shots this match. 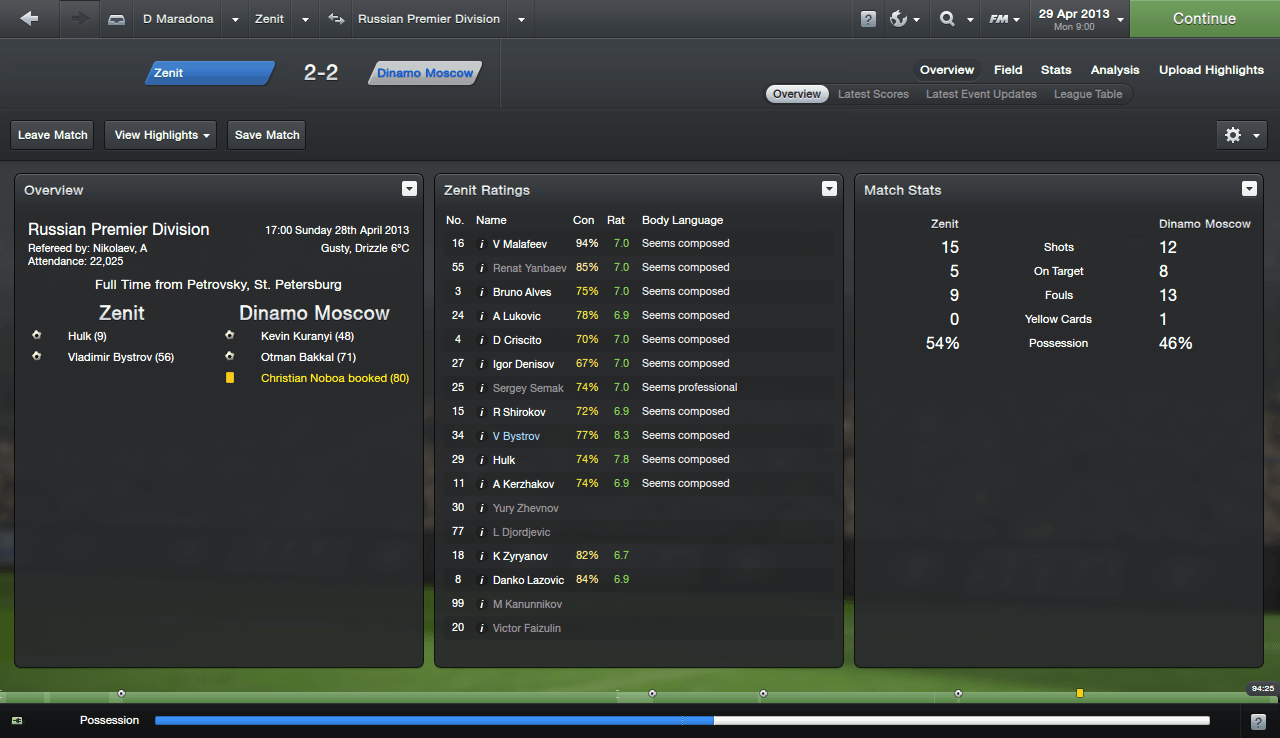 We are still in 1st in the Russian Premier League and have a 6 point lead over 2nd place Anji. 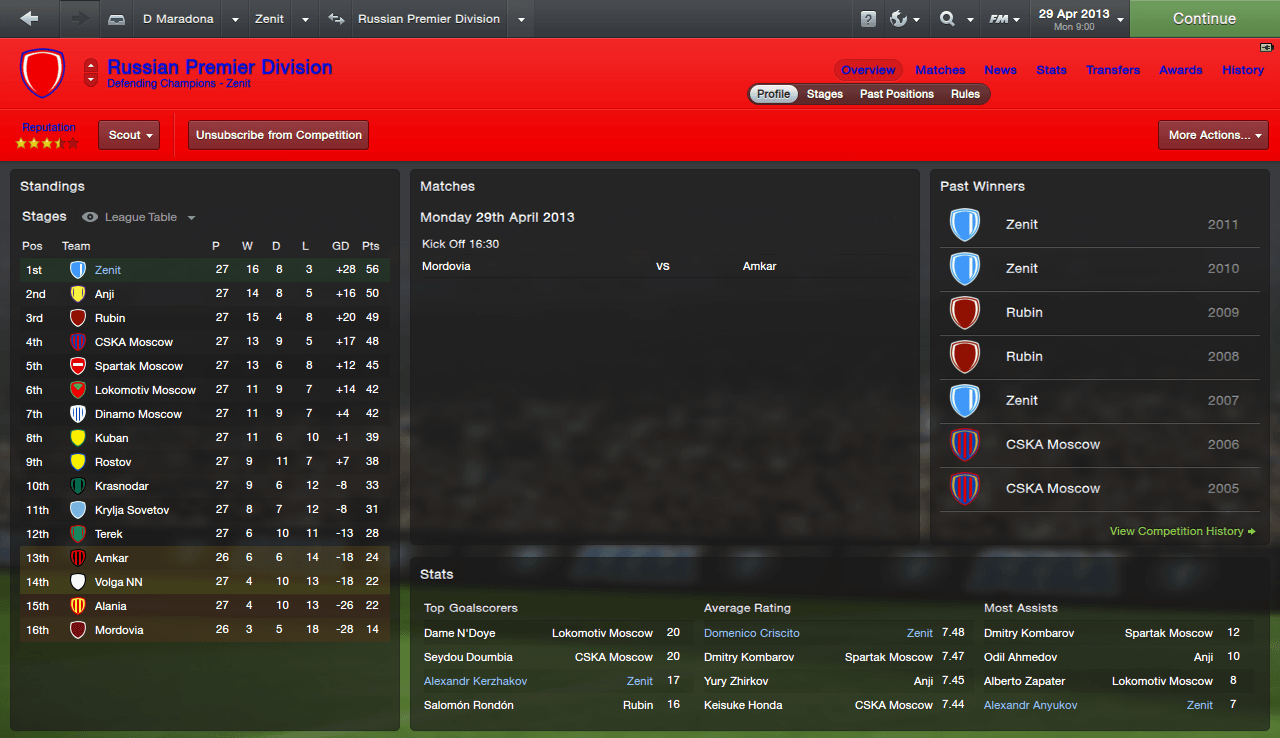 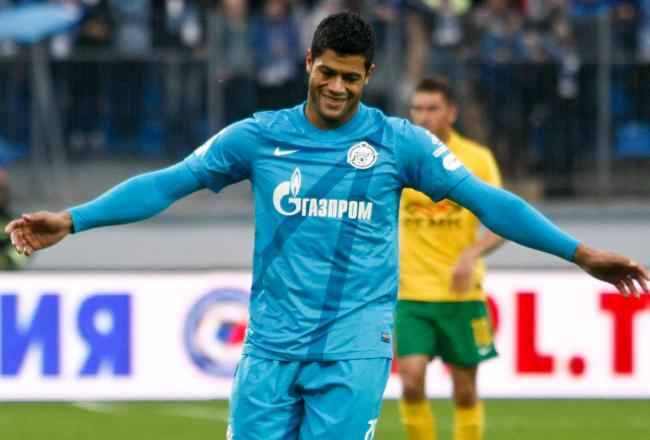 Hulk, the Brazilian had 6 goals and 1 assist this month. That's one goal created per game. Also, he had a 9.9 match rating against Terek.
Login to Quote

I love the fact that when you got sacked, you did not give up on the story but u keep going. all the best mate

AussieToffee
9 years
Brilliant story thus far!! Great to see someone stick with their save even after a sacking. Keep up the Good work!
1
Login to Quote