shylax
9 years
http://blog.abgllc.net/wp-content/uploads/2012/10/new-england-revolution-logo.jpg.gif
January 1, 2012 - ESPN Soccernet reports that the New England Revolution have reached a deal with 25 year old Shylo Elliott to become their head coach. Elliott is a largely unknown commodity within American soccer circles, he played for the Middle Tennessee State University Blue Raiders men's soccer team, but has no managerial experience. Word from sources said that the Revolution didn't expect to hire Elliott but were impressed with his interview, and wanted to go with an outside-the-box hire.
Login to Quote

J: Congratulations on becoming the head coach of the New England Revolution! Is it a dream come true for you?

SE: It is, definitely! It would be a dream to coach any team, considering my experience. I'm just glad the Revolution gave me a chance to show what I can do.

J: Have you taken a look at the squad yet? What do you think?

SE: I've only taken a cursory glance at my team. I believe I can win with anyone I put out onto the field, but in time, I do want to make this my own team.

J: Do you plan to hire your own staff?

SE: We don't have much time in the offseason until friendlies start, so for now, I will be retaining everyone. My staff will be evaluated in the offseason and I will hire and fire as necessary.

J: What kind of soccer do you plan on playing?

SE: They hired me to play attacking soccer, and that's what we'll do. I want a healthy mix of keeping the ball on the ground and making entertaining and effective plays in the final third. I want to pass opponents into the ground. The best defense is a good offense. If we're not scoring goals, they are. If we're not possessing the ball, they are. Ball control is very important to me. That said, defense will not be optional, either. I expect my team to win every ball in the air. I expect my defense to act as a shield for my goalkeeper. If my goalkeeper has to make saves, we've failed.

J: What formation do you plan on utilizing?

SE: My favorite formation and the one I wish to install is a 4-3-3 played with 4-5-1 personnel. I like having attacking midfielders on the wings and a strong central defensive midfielder setup. I feel like only one striker is necessary in the modern game, midfielders are a jack of all trades, and you only need one guy to score a goal. Even my defenders will come up and score a few goals, that's the kind of soccer I want us to play.

J: You have five strikers on your squad, though. How will you deal with that?

SE: In time, this will be my roster. Until then, I will adapt, I will consider rotating strikers in as attacking midfielders.

J: Who is your model manager?

SE: I have two models. My first is Arsene Wenger, the manager of Arsenal. He subscribes to a philosophy of attacking soccer, as well as building a club cheaply through youth. It's even more important in MLS since we have a salary cap. My second model is Bill Belichick, the football coach of the New England Patriots. The NFL also has a salary cap, and Belichick has managed to win 3 Super Bowls in 4 years despite the presence of the cap. I want to make the Revolution a soccer power in the same vein, and become as respected as a tactical genius as Belichick is.


J: Thank you for coming out for this press conference!
Login to Quote

Shanked
9 years
Looking forward to this story, first one in the MLS for Fm13 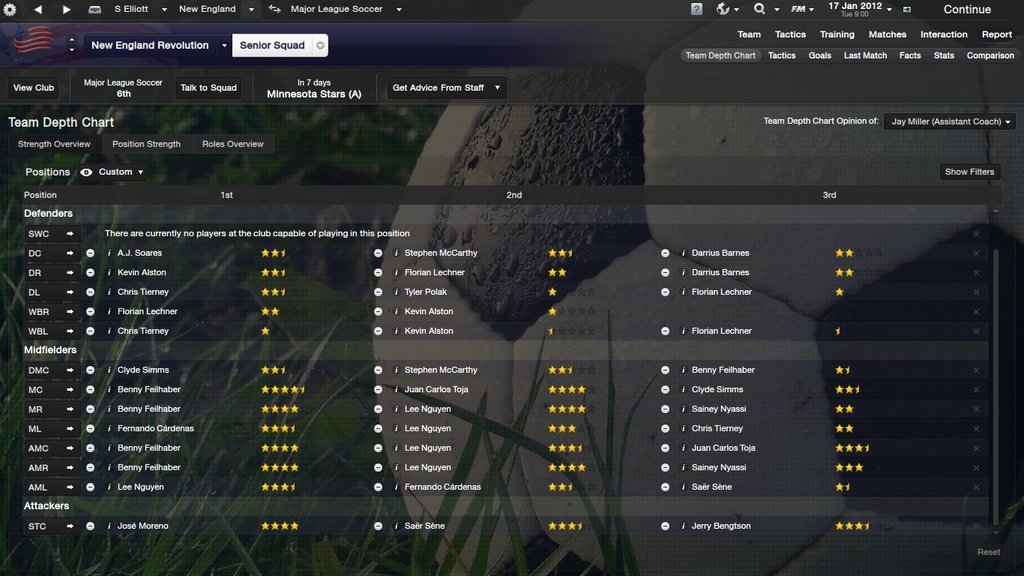 Comments: Barnes was only a 2 star rated player for MLS, and we gave up a 3rd round pick for him, so to get those two picks is a pretty nice deal. 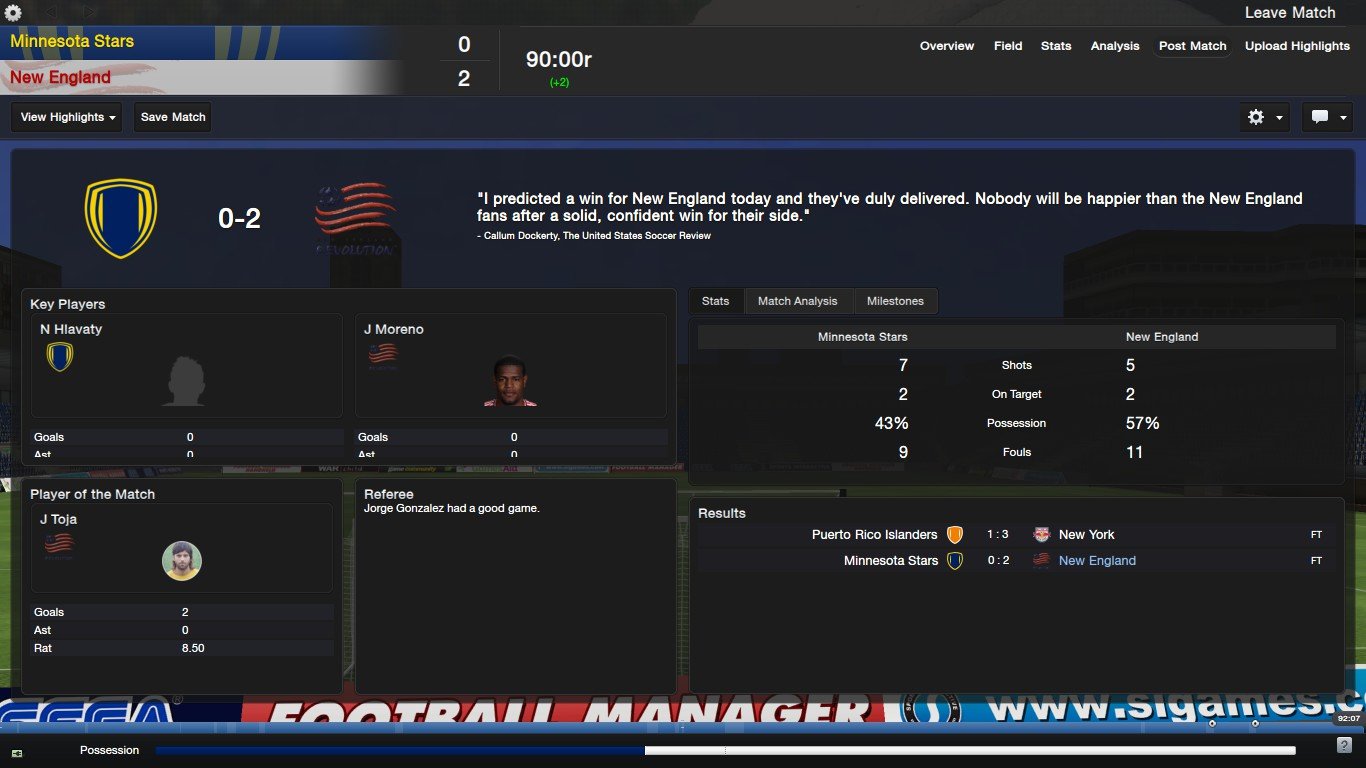 Manager's Comments: This was a dull game for 80 minutes, and until the 2nd half, the Stars dominated possession. Thankfully, they were wasteful of their chances, and we got some good ones in late in the game to not be embarrassed. 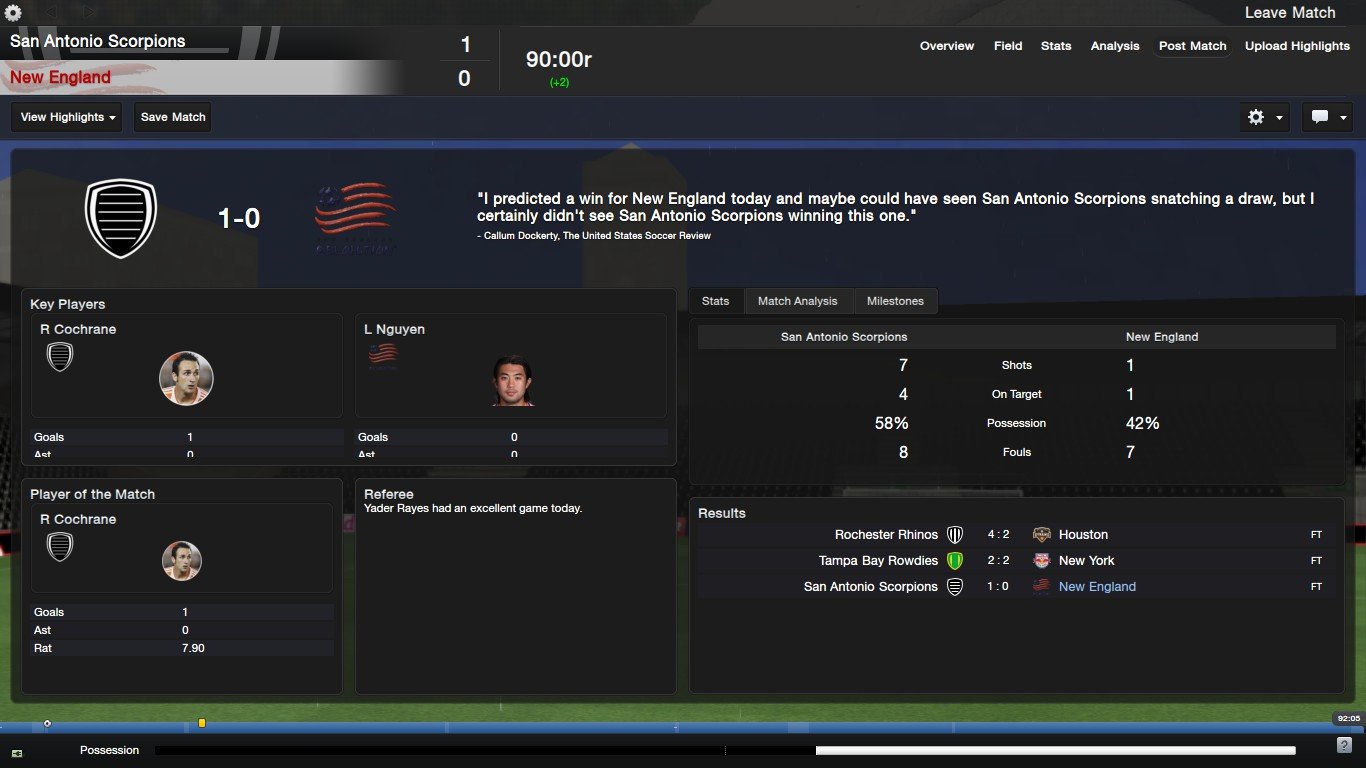 Manager's Comments: This was a terrible game for us, we didn't have the ball, and when we did we didn't make anything out of it. 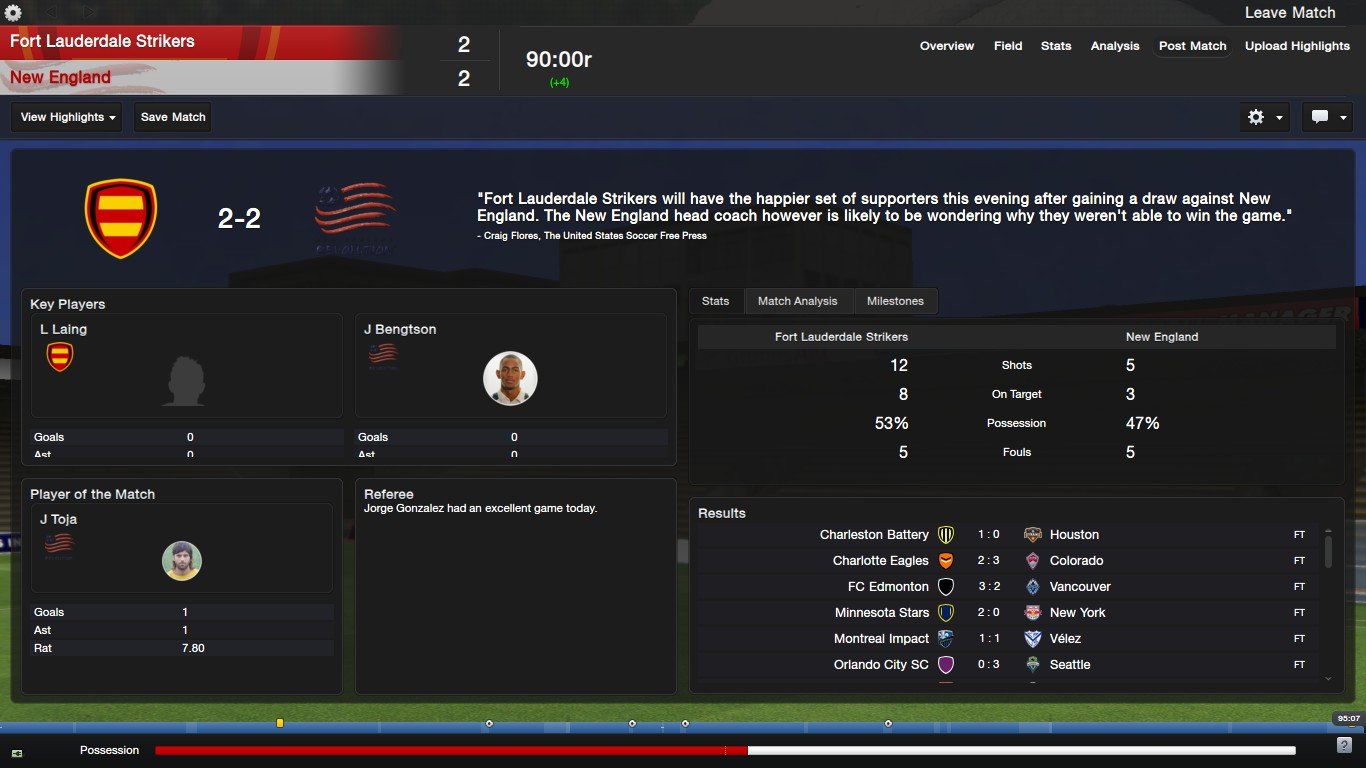 Manager's Comments: Thankfully the injuries weren't too bad. I really like Toja's playmaking ability, I just need to get the defense playing well. 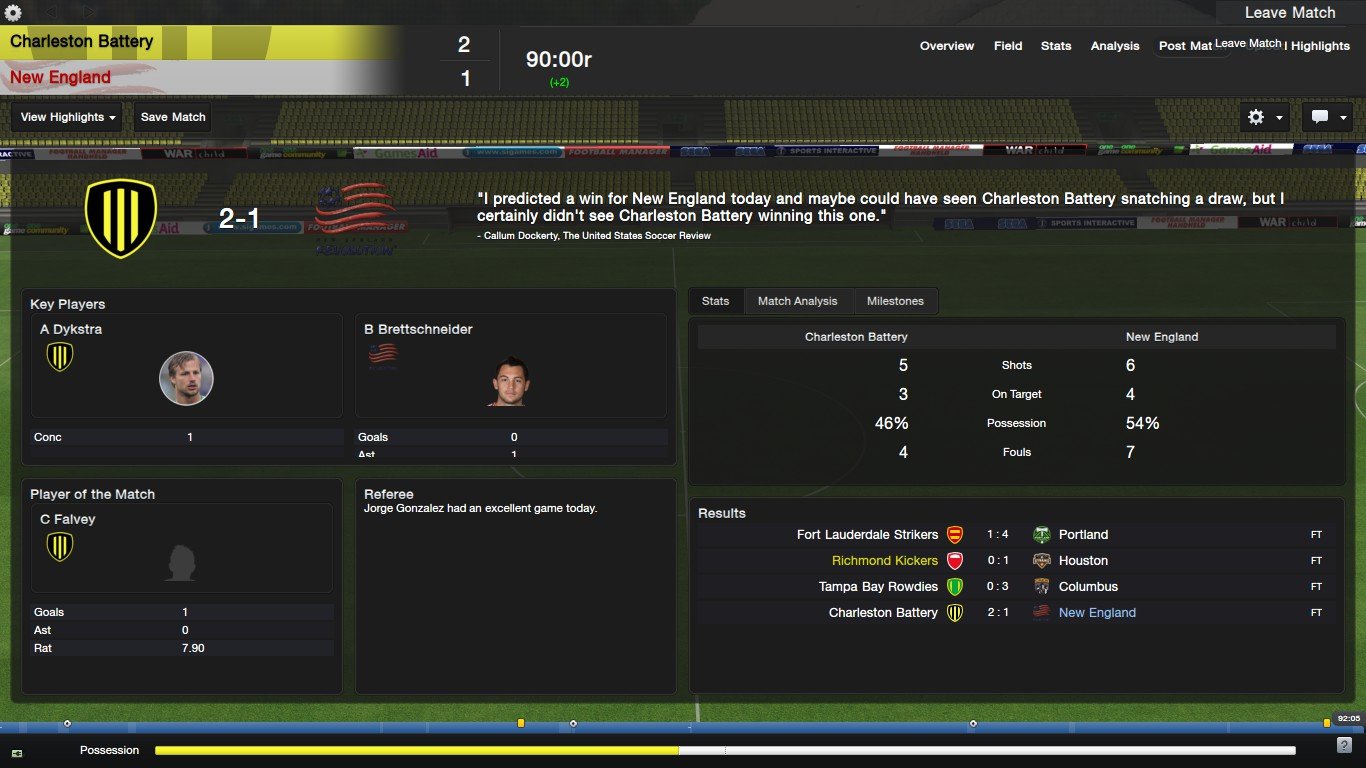 Manager's Comments: We should never have let them make that great counterattack that gave Prince the winning goal. We dominated possession, but we had about as many chances.
Login to Quote 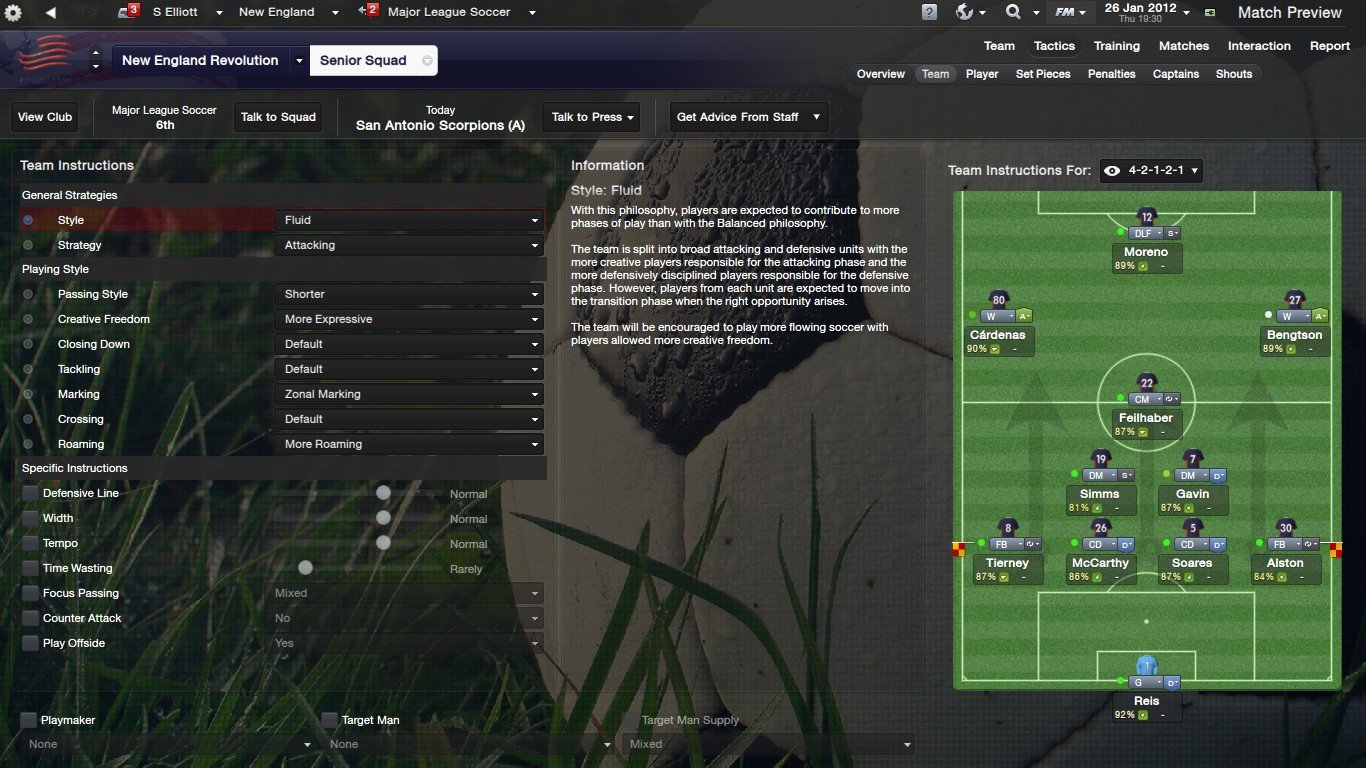 I forgot to change pressing to tighter pressing until the 4th match. I'm thinking about changing to a more direct and longer shot style, just to take advantage of our poachers, plus our movement isn't as good.
Login to Quote

Dalnoth
9 years
The MLS has very complex rules and it's a pain to manage in. But finally someone has take up the challenge. Good luck with New England. Feilhaber is the only player I recognize from your team 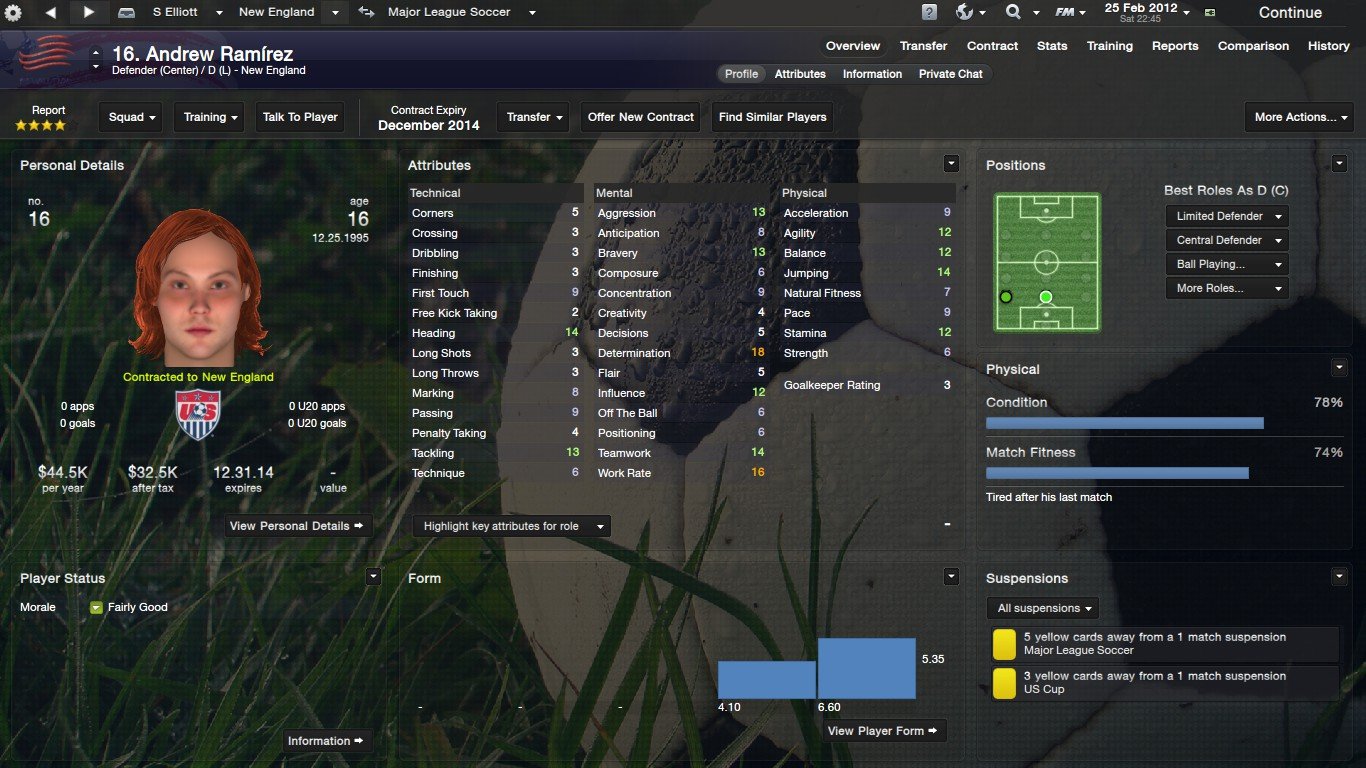 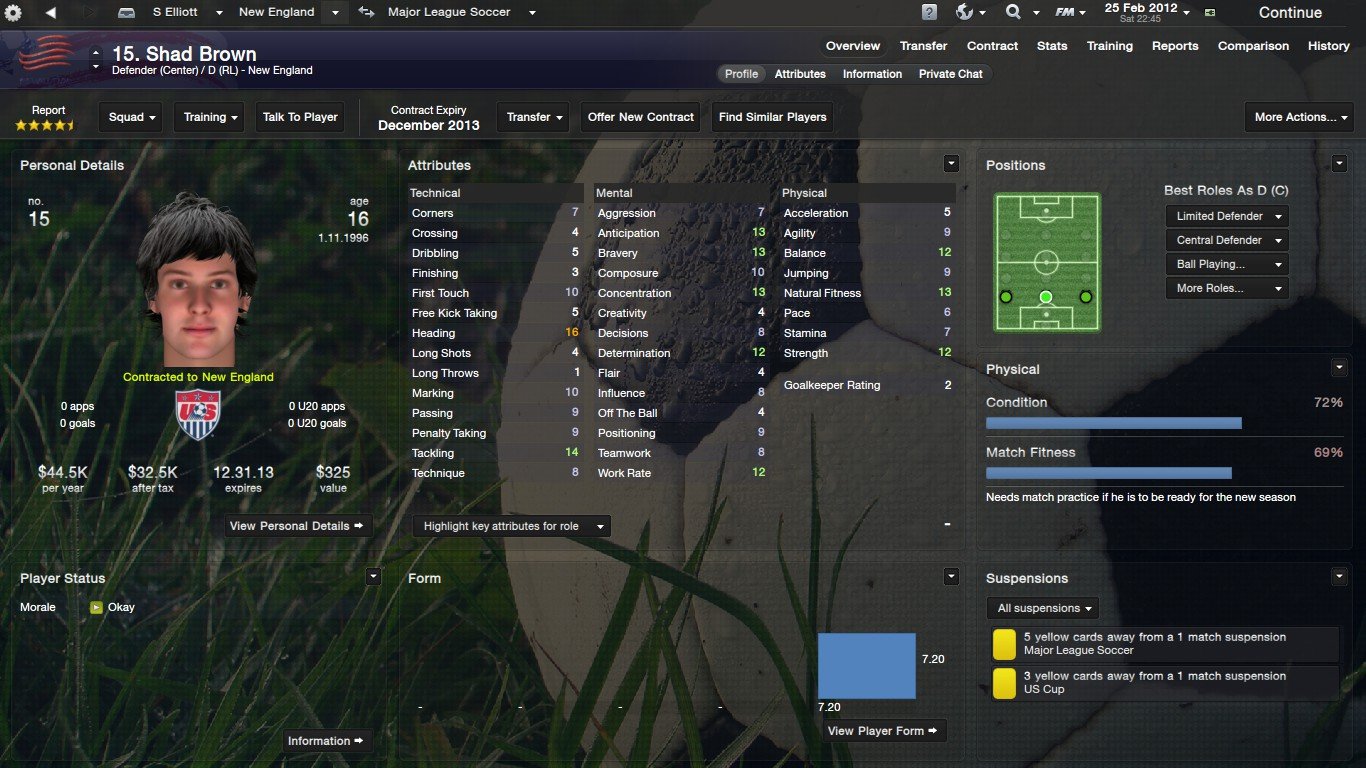 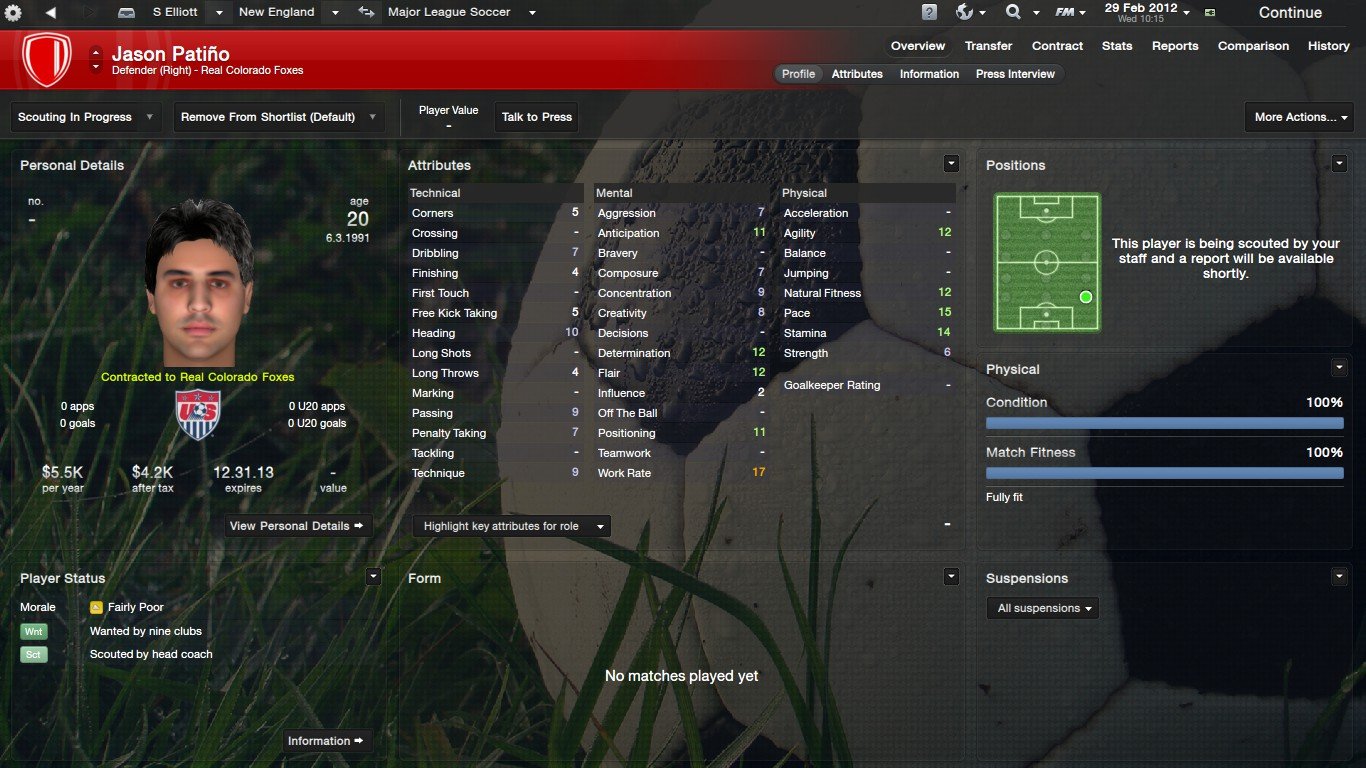 Ramirez and Brown are callups from the Revolution Academy. They're raw, but they have great potential, I need center backs, and I have no issue playing kids. Also, from what I just learned of the Weighted Lottery, teams can only get one player on Weighted Lottery transfer per year, but it doesn't seem to hurt to participate, and even though Patino hasn't been scouted, he seems reasonable to me.

Trying out a vanilla 4-4-2 formation with more direct play. I hate putting the ball up in the air, but let's face it, we're not a top European side. We won't be that efficient, but we don't need to be. If we can catch defenses on the transition, that will create goals for us. 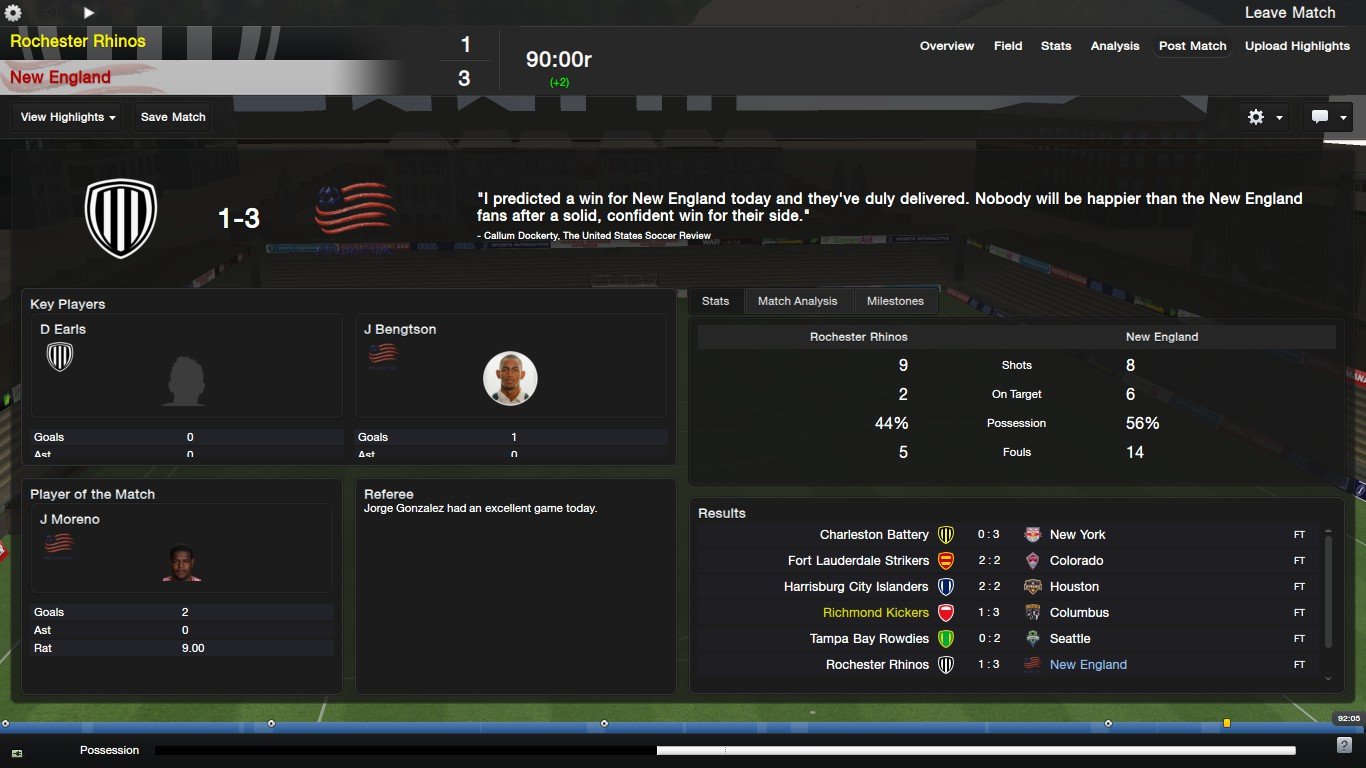 Manager's Comments: We didn't play perfectly, but it's hard to find fault with this kind of game. 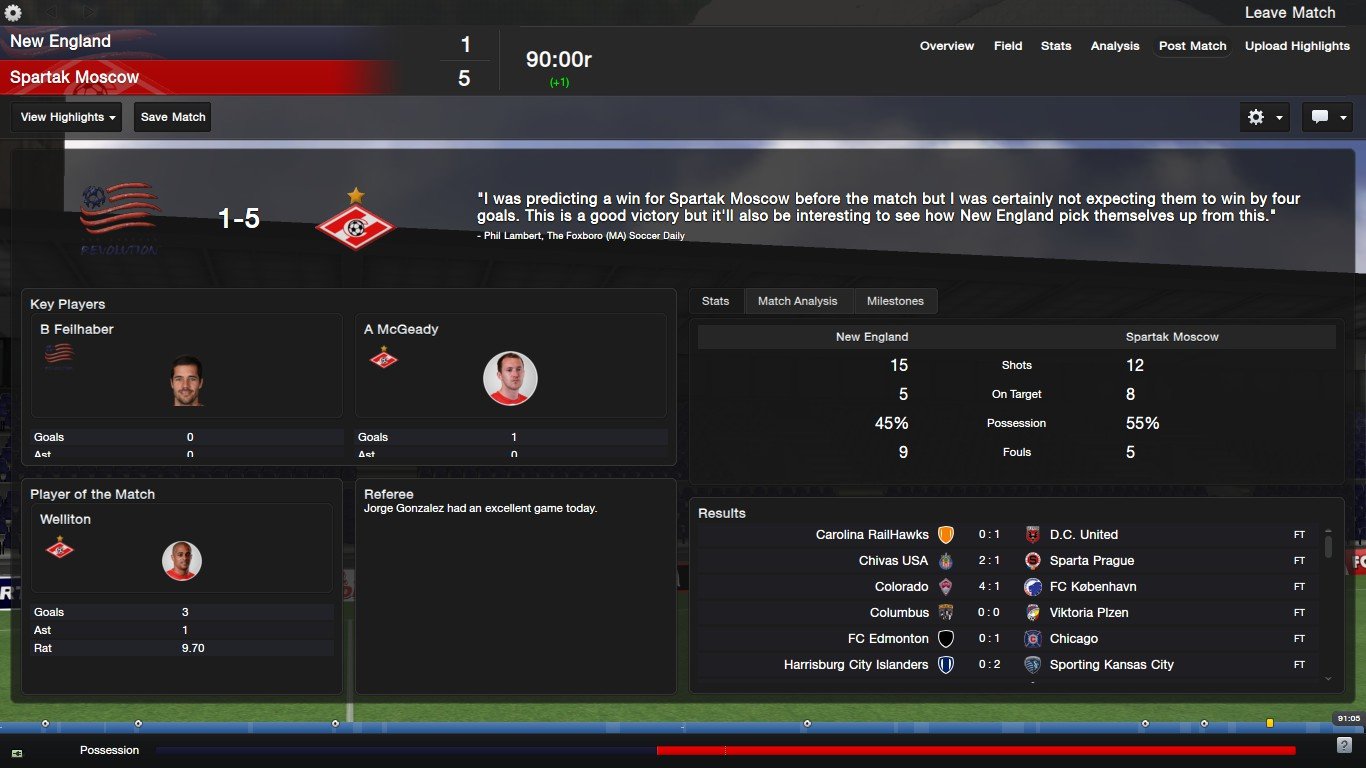 Manager's Comments: We expected Spartak Moscow to be very tough opposition, but never makes losing by this margin feel better. 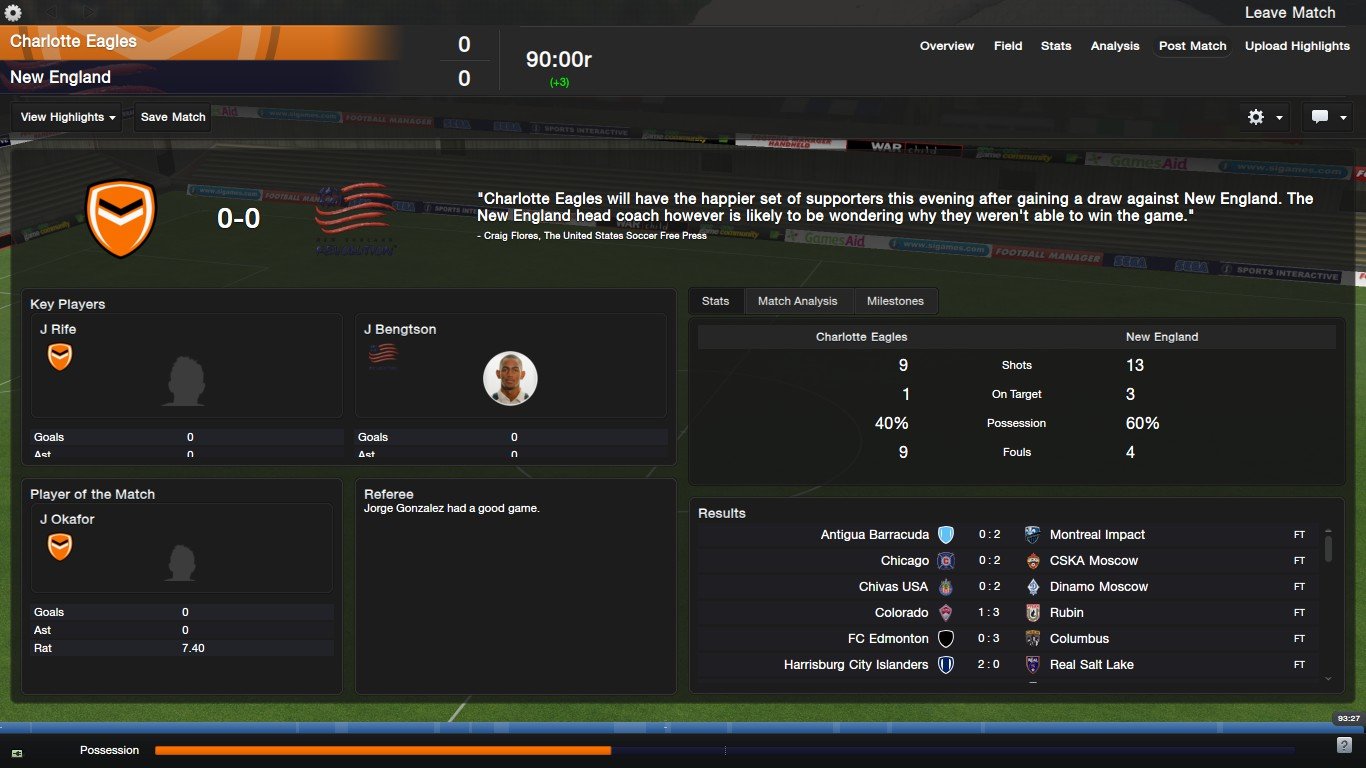 Manager's Comments: What the average American thinks every soccer match is. No action, no heroics, just 90 minutes of boredom.
Login to Quote 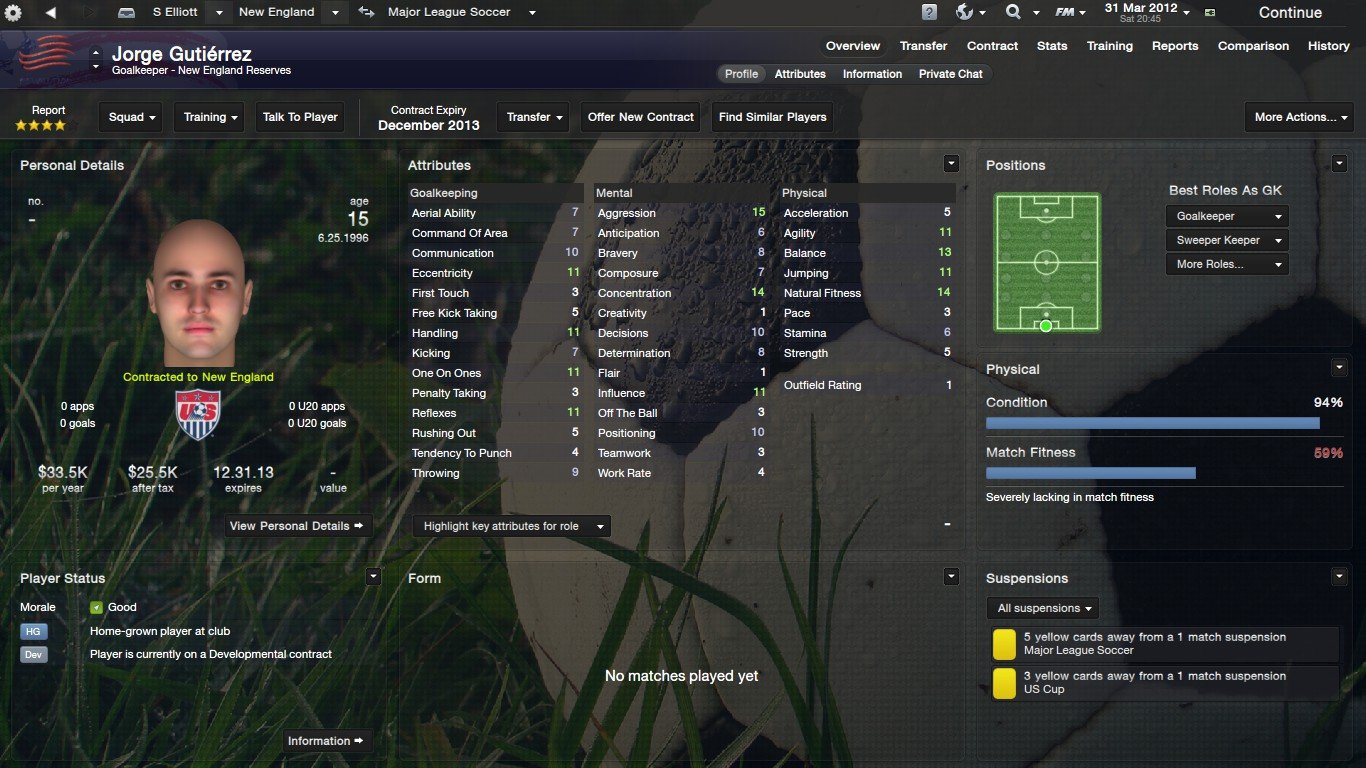 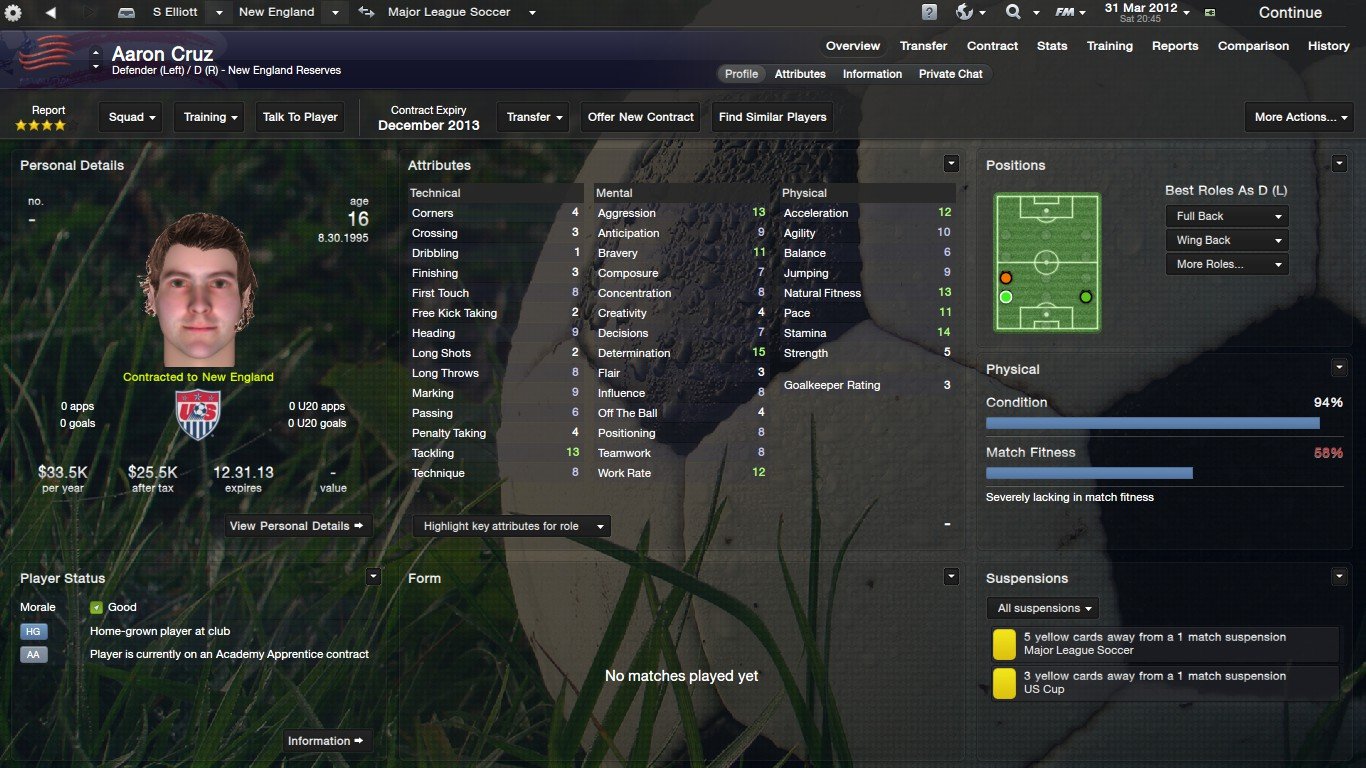 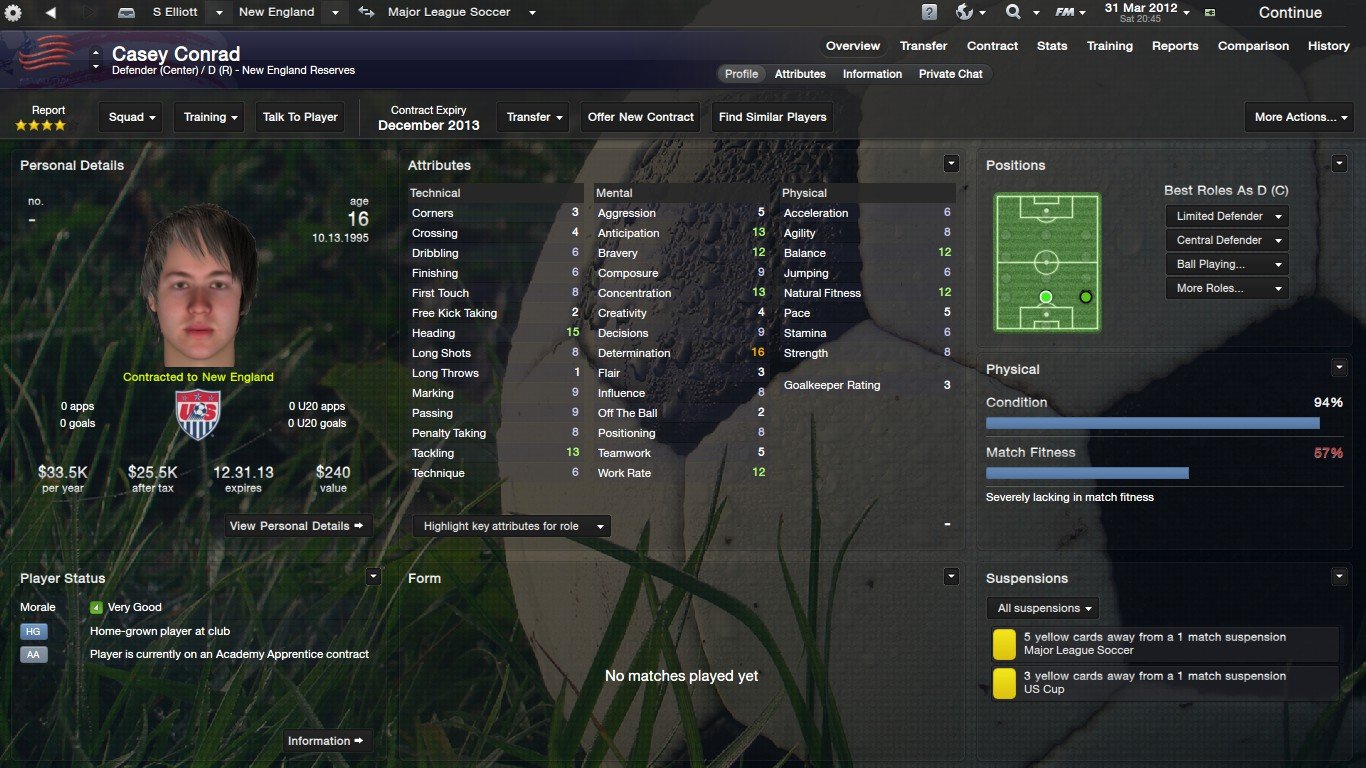 Always building towards the future, and these are cheap players. 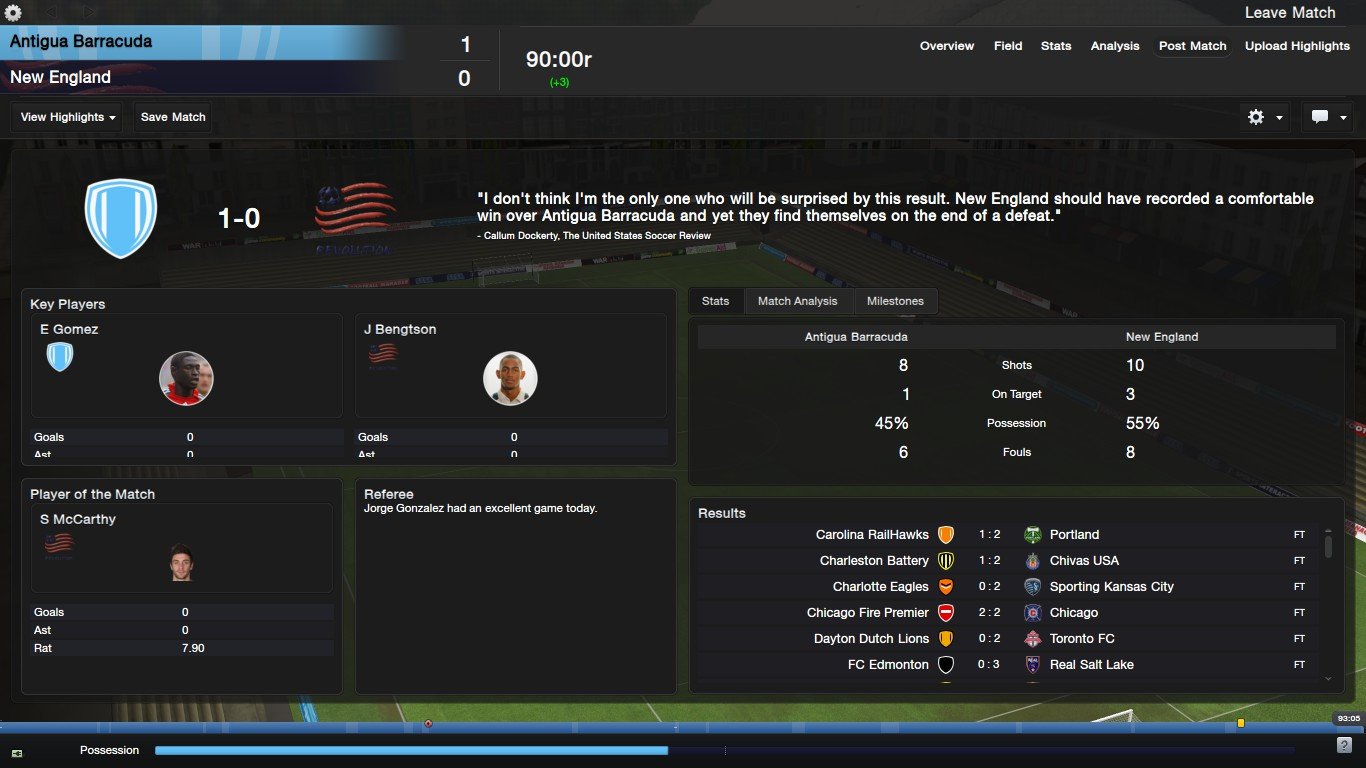 Manager's Comments: We keep dominating possession, but losing on the score sheet. Our finishing is terrible and needs to be improved. 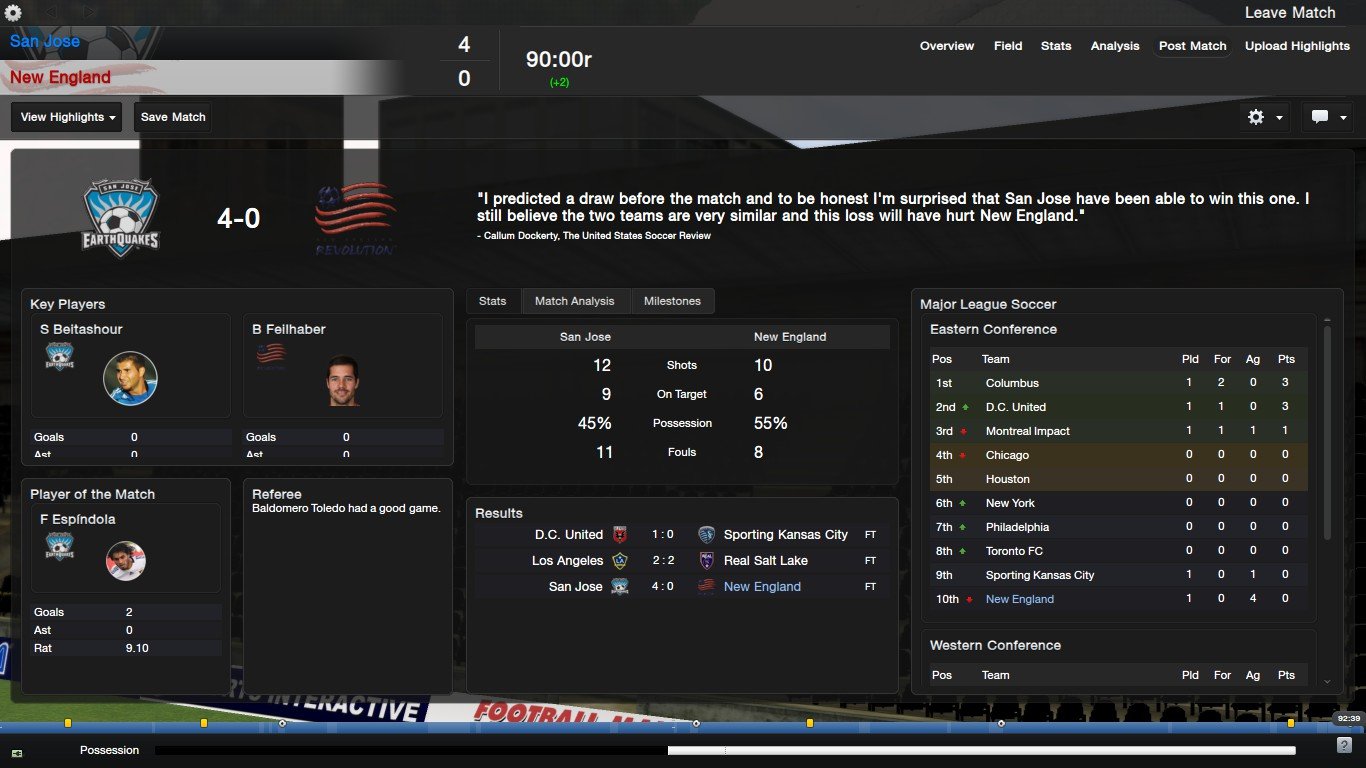 Injury Update: Benny Feilhaber out 5-6 weeks with a twisted ankle and has been placed on the Disabled List

Manager's Comments: This was atrocious. I don't know what I'm doing wrong, or if the players are just not quality, but we have lots of room for improvement. 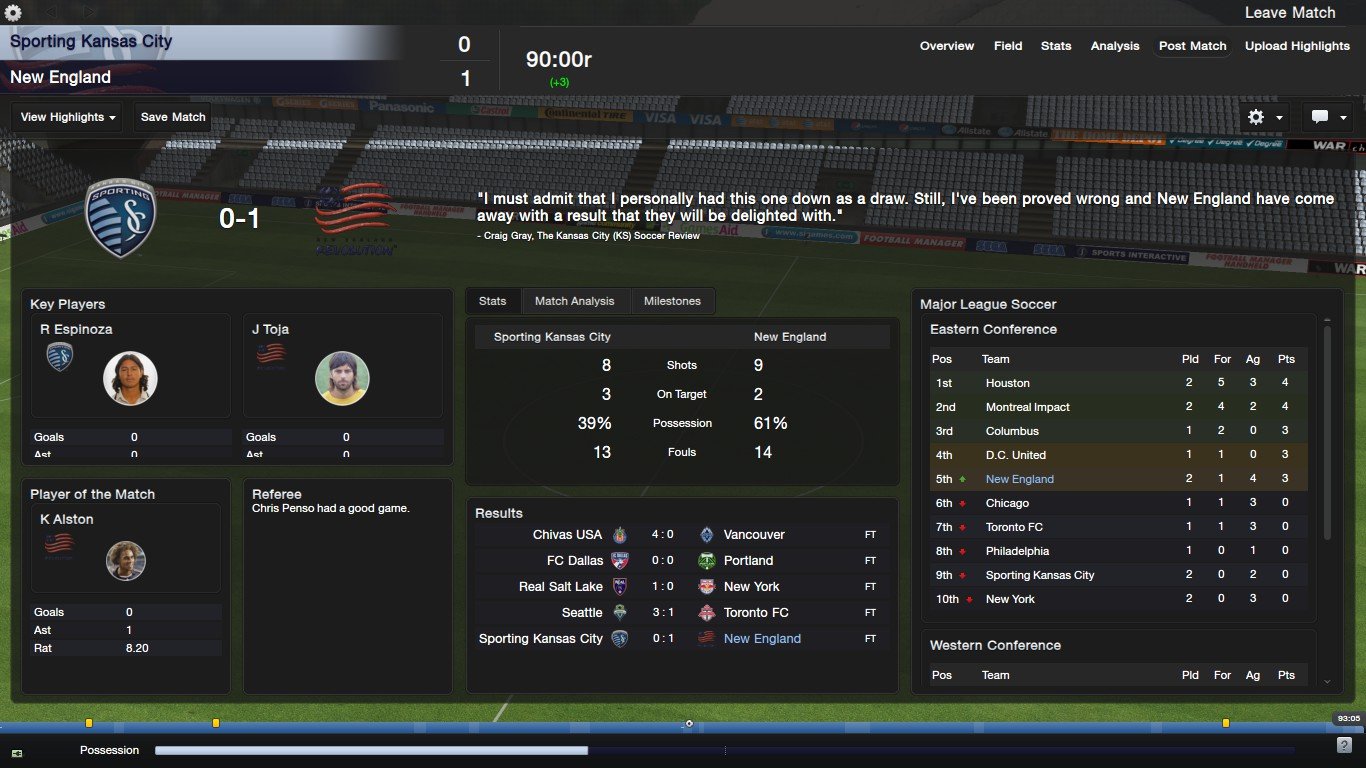 Injury Report: Blair Gavin out 3 weeks with a gashed leg

Manager's Comments: It was an ugly grinder, but we won, and the post match pep talk helped greatly with morale. I moved back to a shorter passing style with the 4-4-2. 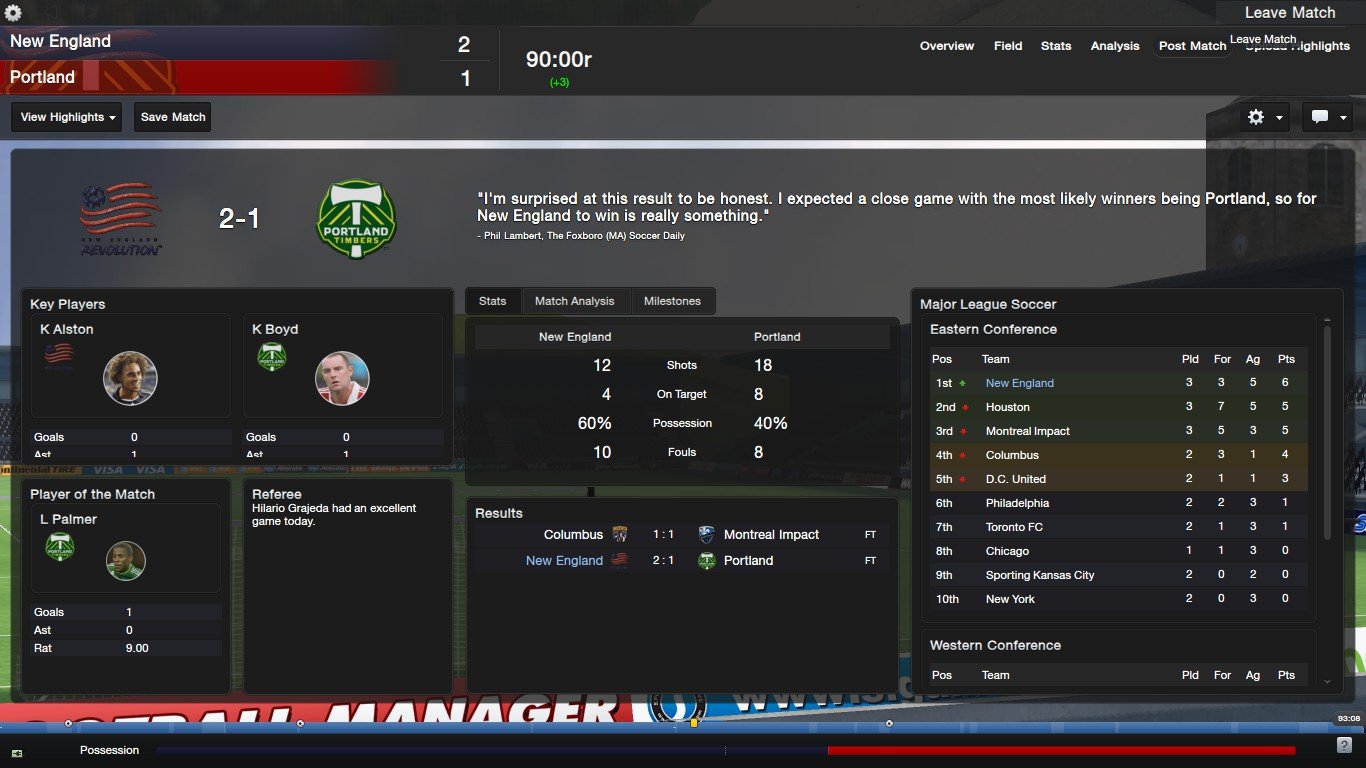 Manager's Comments: After having a great first half, we tried to do everything possible to blow our lead, then, with about 20 minutes left, we got our second wind, and while we didn't score, we did control the ball and not let Portland have chances. 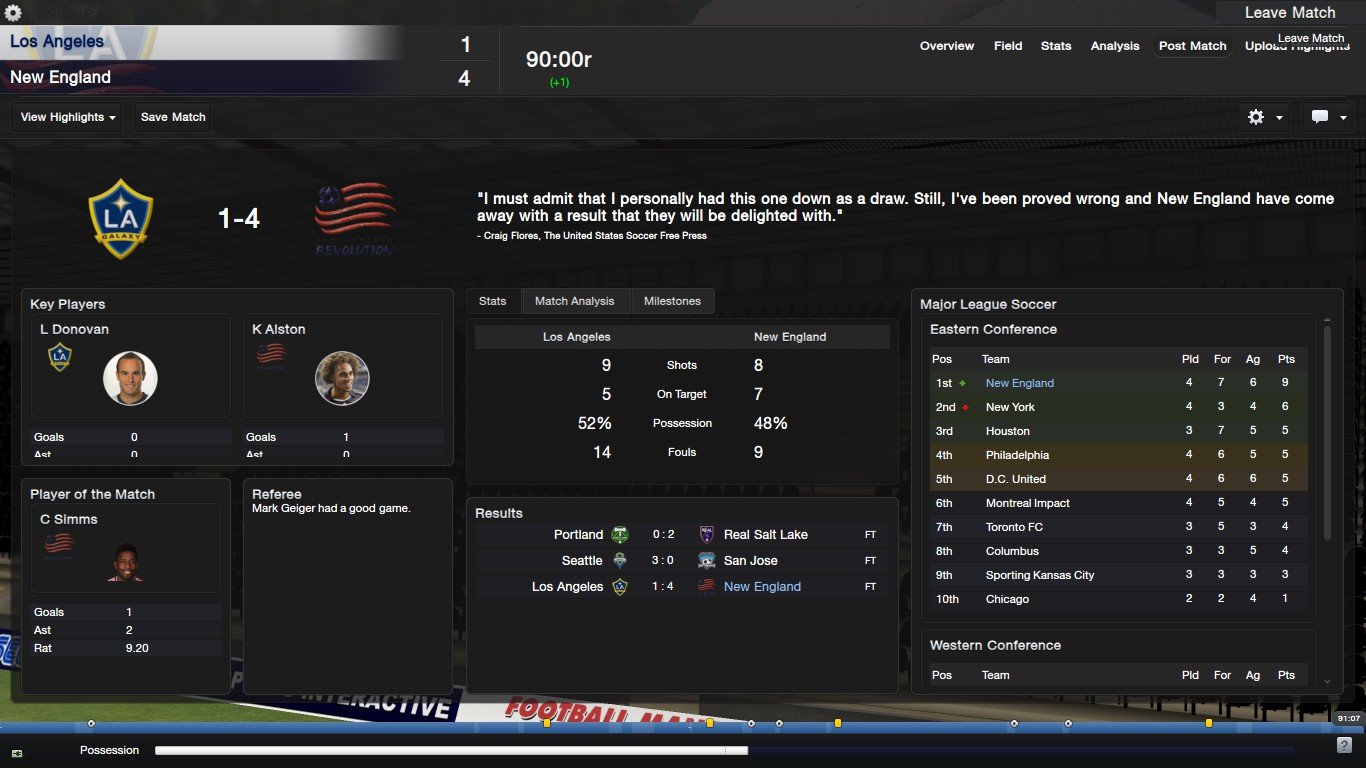 Manager's Comments: A great win! We don't have the big name internationals like Los Angeles has, but we did have the quality today.
Login to Quote 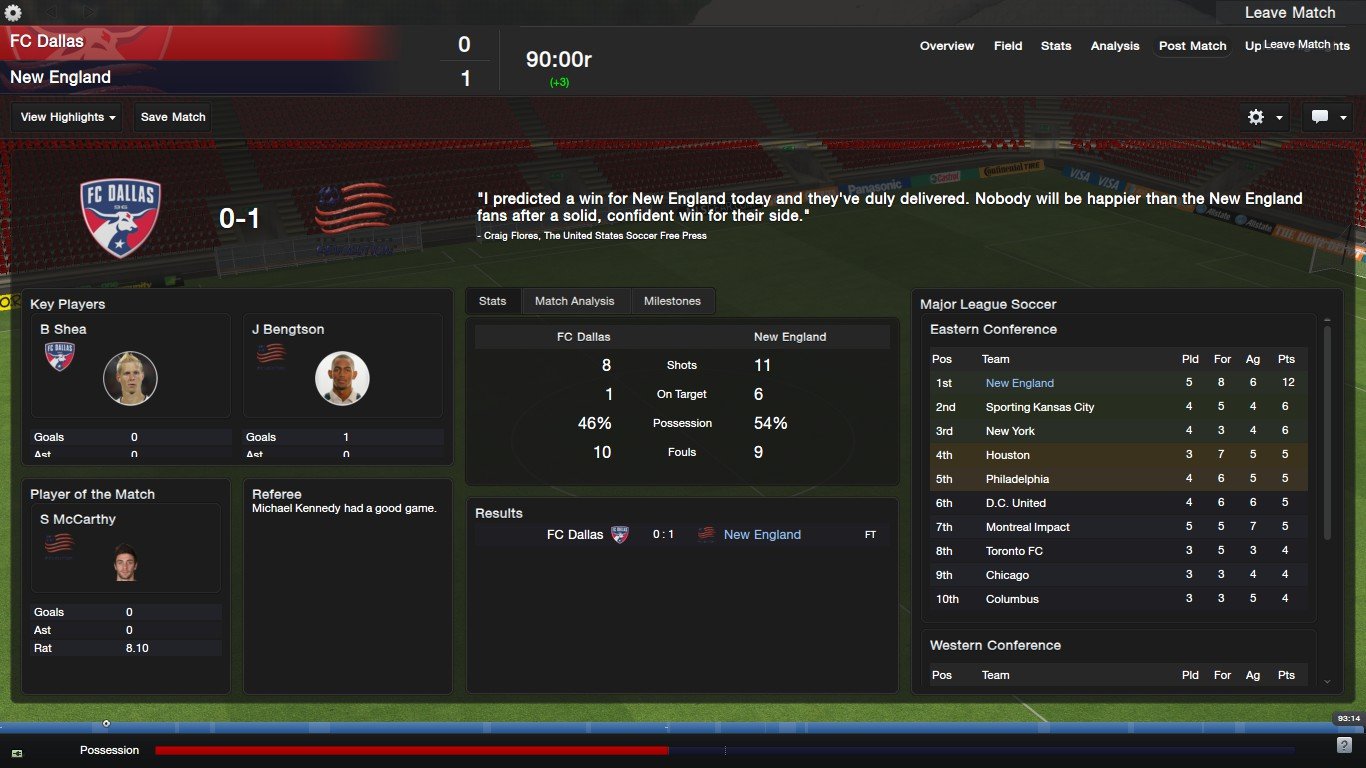 Manager's Comments: The referee was very lenient, with no cards being given out all game when one or two might have been justified, not that I'm complaining. Both of us were unlucky with our chances, but we were luckier with ours and had the luxury of playing 82 minutes with an outright lead. 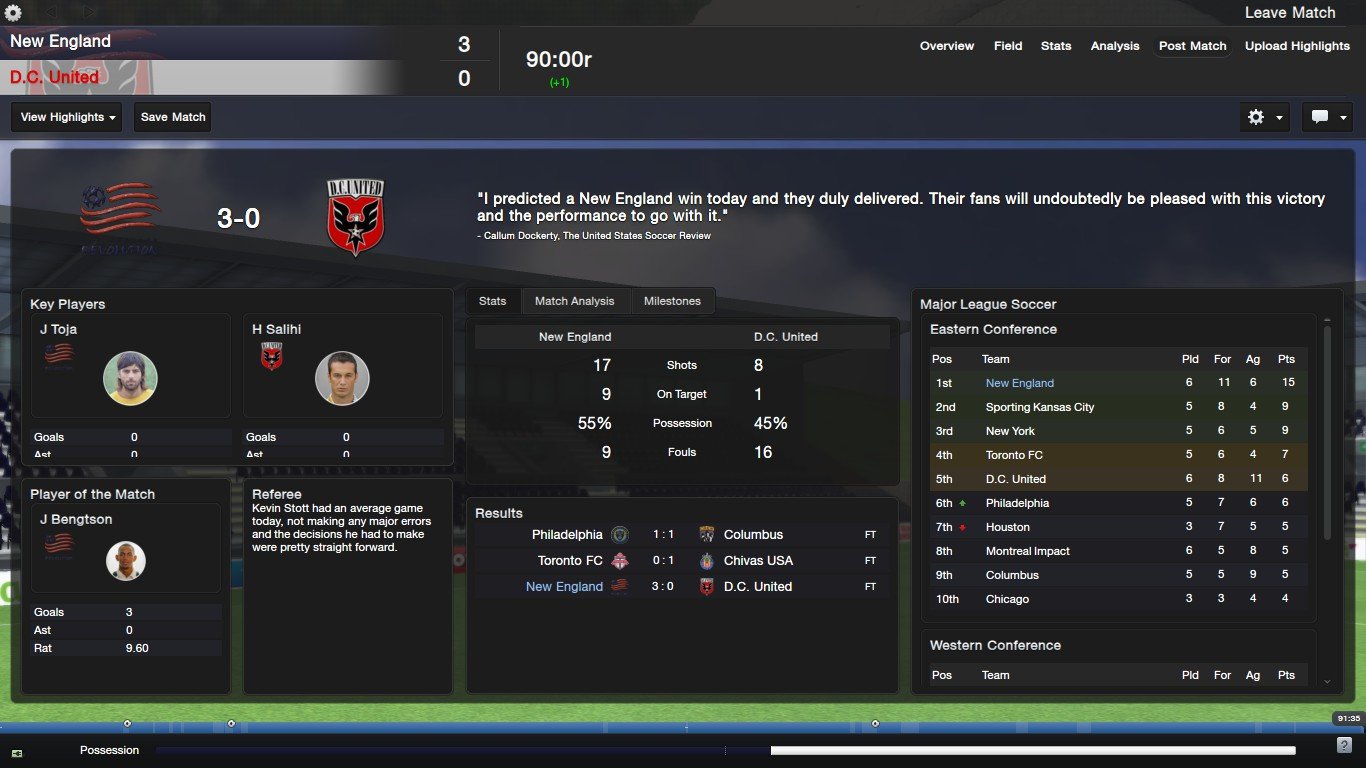 Manager's Comments: I had been dismissive of Jerry Bengston's abilities earlier in the season, even going to the point of picking up Kei Kamara off waivers and starting him over Bengston. I'm very glad to have been proven wrong, and I hope Bengston can keep banging them in!

Injury Report: Juan Carlos Toja out 2 to 3 weeks with a gashed leg. He's been playing great so this will hurt for us, but we shall overcome.

Other News: Jerry Bengston named MLS Player of the Week for his performance; the MLS International Transfer deadline passed on 4.15.2012, I didn't feel like there were any moves to be made, and my roster is already packed. 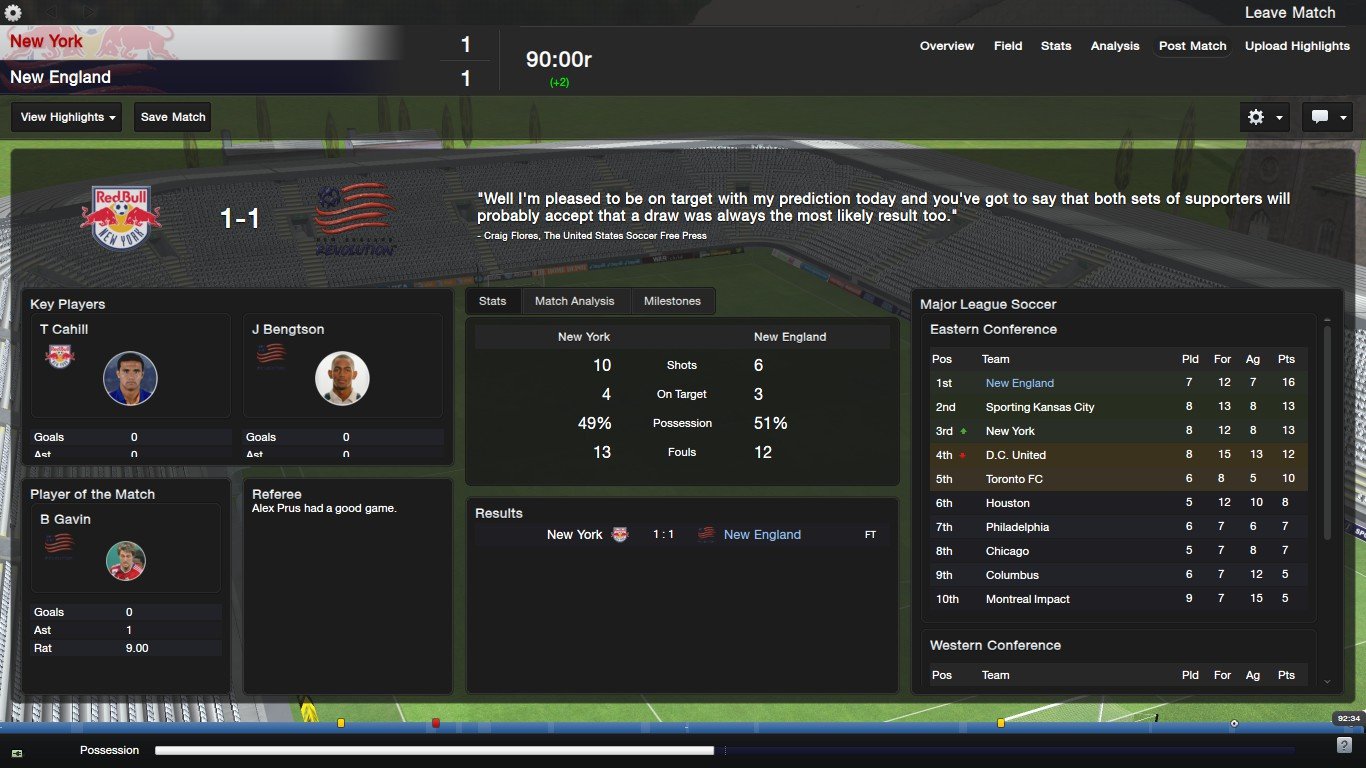 Manager's Comments: As disappointed as I am that we let the win slip away at the last moment, a draw is very good considering we were left with 10 men for most of the match.

Disciplinary Note: The New England Revolution have given Kenny Alston an official warning about his on-field conduct, or lack thereof.
Login to Quote