The season is over, we are champions and have secured our 2nd straight promotion by a huge margin. This was pretty obvious in the way we played some of our last few games which is disappointing because I wanted us to set records and win by an even bigger margin but I can’t complain after the way the boys have played all season. We played against Leicester in the JPT final and held on until the 70th minute. It seemed at that point they were just too strong and scored twice in quick succession to win the trophy but we will be back next year to make up for this disappointing loss. Nobody expected us to reach the final so looking back on it I really cant complain. We were expected to finish 22nd in the league and we are right at the top. 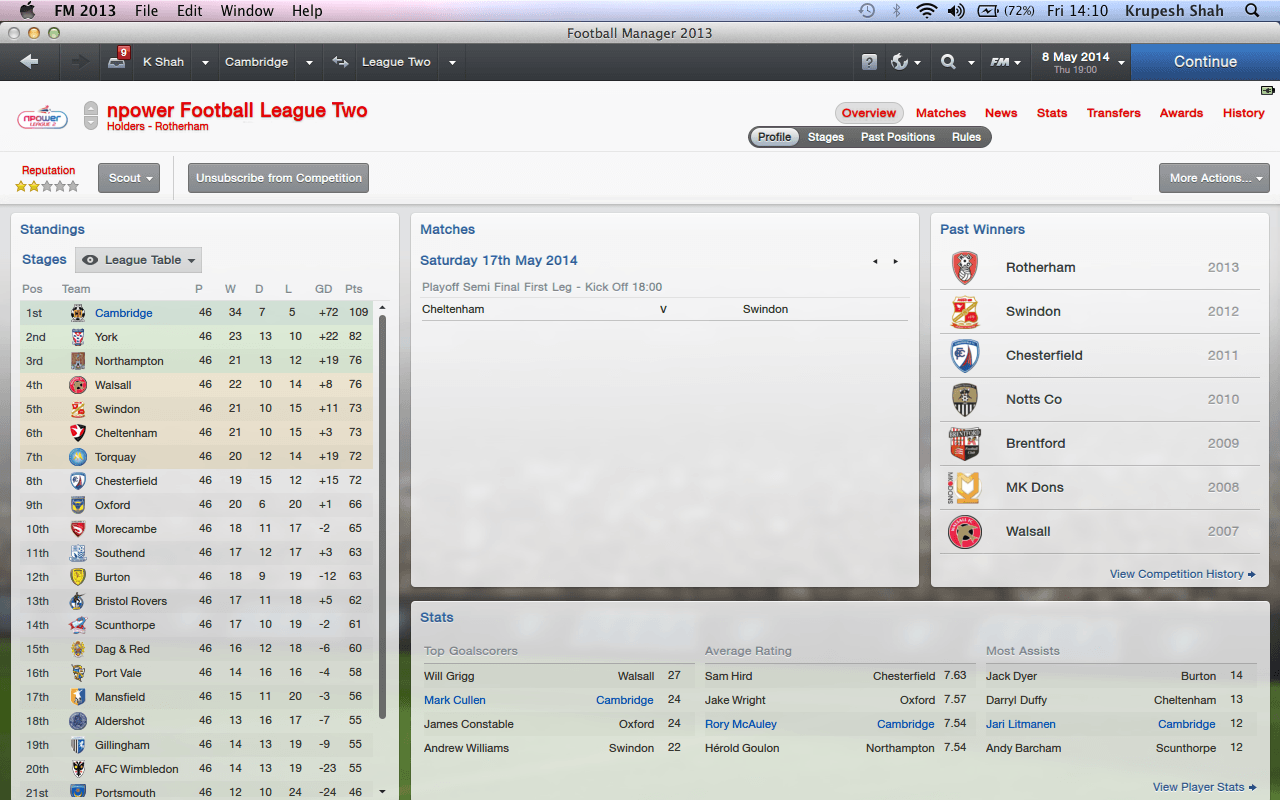 The month of March was full of victories but the final month was indifferent. We won 1, drew 2 and lost 2 which was probably the worst part of our season but luckily we had wrapped up promotion and the title and I am unbelievably proud of the group of boys I have with me. Mark Cullen, who we had on loan in the BSP and then got on a free transfer, was outstanding. He scored a massive 24 goals in the league despite playing only 32 games. He is only 22 and will be a huge factor for us in our time in League One and hopefully our push to get our 3rd promotion in a row. Tom Elliot, who had started the season on fire finished strongly too after coming back from a serious injury and finished with 19 goals in 27 games. 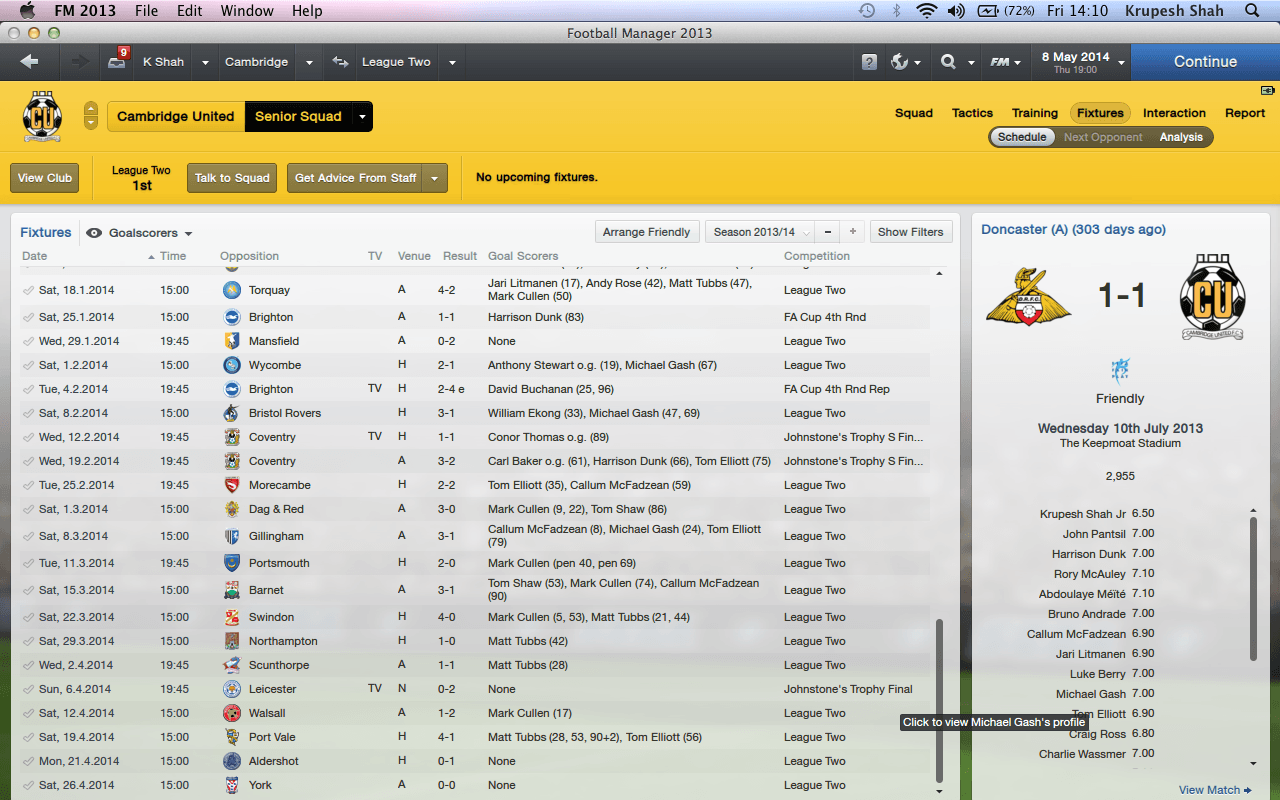 We now need to have a strong transfer window and my scouts have been working tirelessly to bring in support for our first season in League One. There will definitely be some big signings coming in to the club and we have already secured our first signing before the transfer window opens, signing left back Paul Dummet from Newcastle. At just 22 and with a good future ahead of him he will definitely become first choice left back and hopefully will be just as successful a signing as everyone at this club so far. 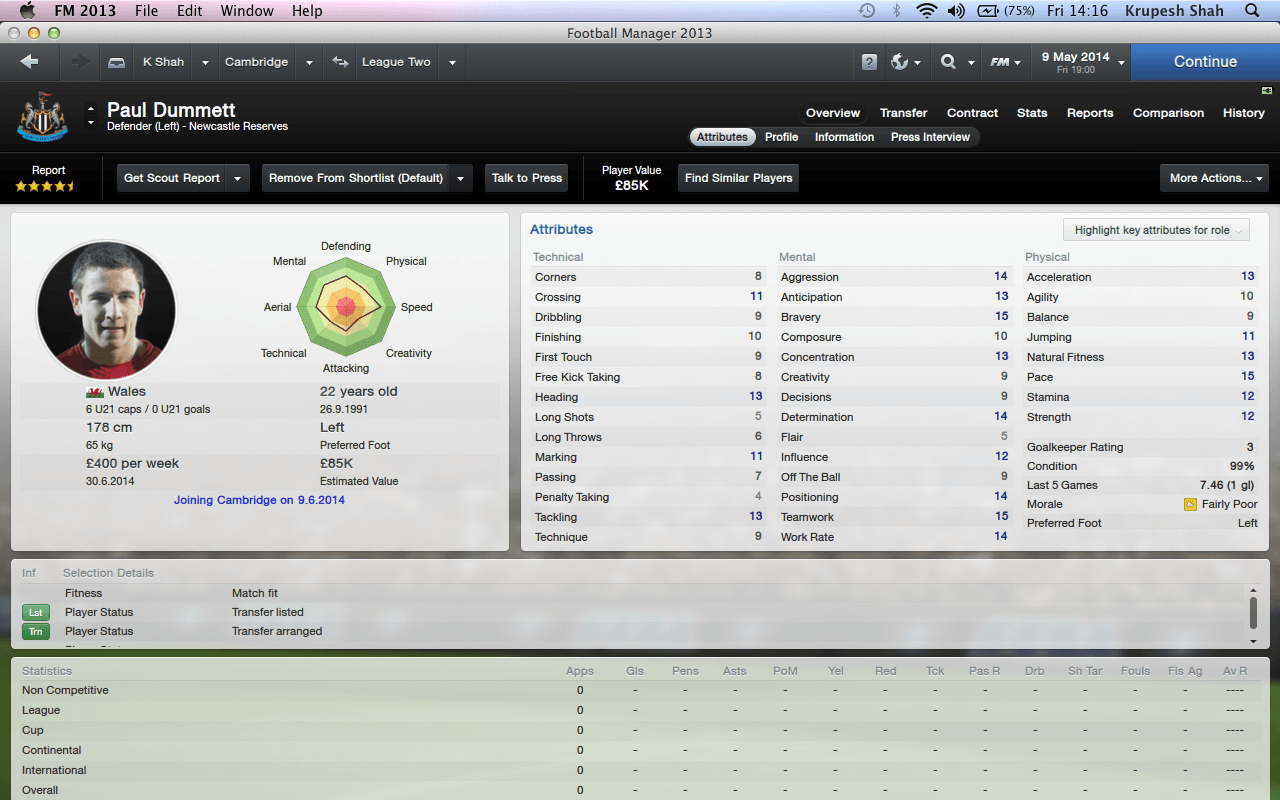 We had some excellent performances throughout this season and so many of these guys have been an important factor of our amazing year. The lowest overall average was only 6.88, with the highest hitting 7.53. There is a lot of room for improvement here but I have no doubts that my players are all looking to improve. 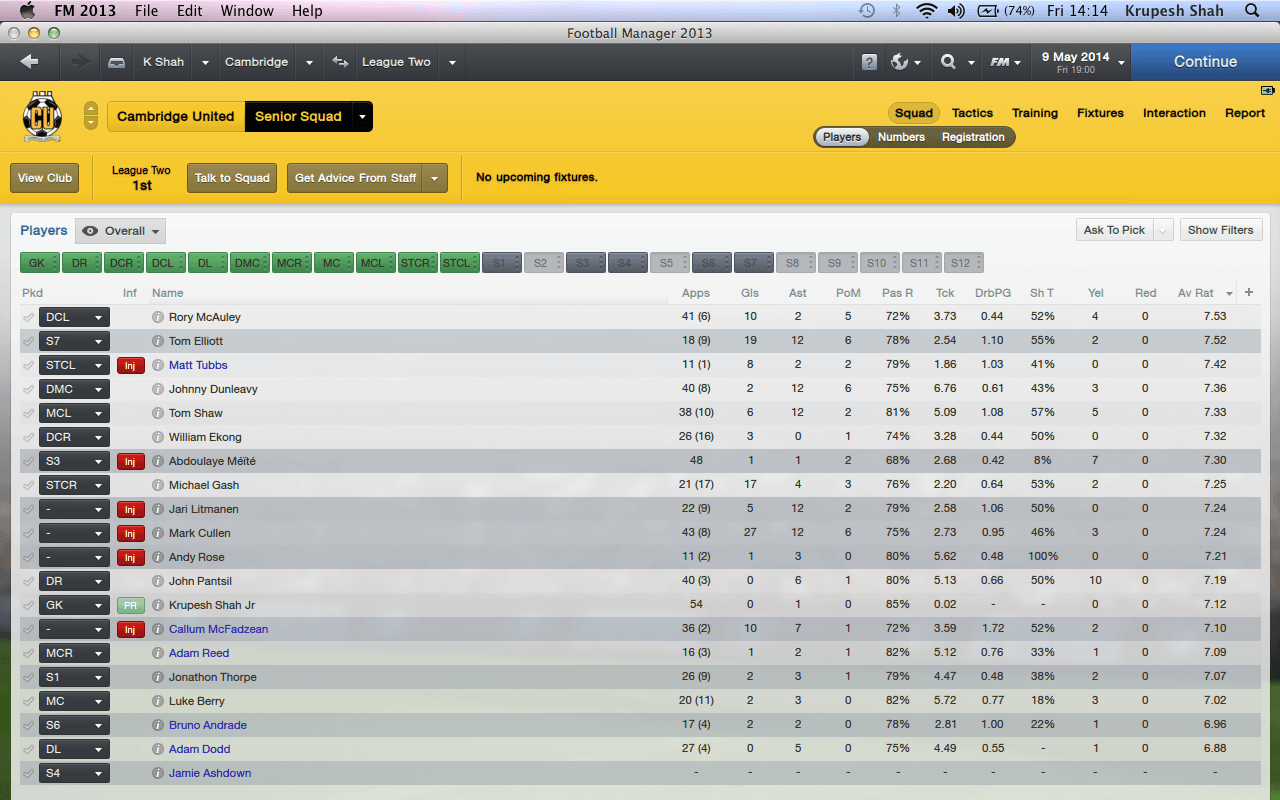 We have news that Real Sociedad are thinking about offering Krupesh Shah a new contract. There has been growing concerns within Cambridge United that the maximum wage the League One club can offer is only £4,100. This is leading to many potential signings not accepting contracts but more importantly Krupesh Shah Jr, the star goalkeeper is not willing to sign a contract for such a lowly pay rise as he is in his final year and the manager is seemingly growing more and more frustrated with the board.

Real Sociedad are in La Liga and this would be a huge jump for Krupesh Shah and there may be the potential to bring his young son out to Spain with him. However, he had joined Cambridge with an aim to get them in to the Premier League. Will his loyalty waver now the board are not agreeing to his demands?

We'll have more news on this story soon.
Login to Quote

Cambridge United are in League One!!! Two back to back promotions have put them in a very strong position and the team is now working to gain one more promotion to the Championship. However, transfers and loans are proving to be difficult as the board are not willing to let the club pay more than £4,100.

The transfer window is currently underway and the club are looking to strengthen in several different areas. The club has got rid of 4 players deemed not good enough and have brought in 10 players, 3 on loan, 5 on free transfers and 2 for a combined transfer fee of £650,000.

Krupesh Shah is known to be a maverick in the transfer window, bringing in players who will strengthen the club's promotion pushes and these transfers will be seen as nothing less than that.

The media is predicting the club will finish in 24th place but Krupesh is determined to prove them wrong, just as he has done in his two seasons with the club so far. The clubs promotion odds are 33-1, showing just how unlikely and difficult the clubs challenge is this year.
Login to Quote

The manager of the U's has not been offerend the Real Sociedad job but now has to consider whether he should sell his son or keep him for one year in the hope of promotion and lose him on a free transfer.

The potential success of the club could see Krupesh Shah Jr return to the club within a few years if Cambridge United do in fact make it to the Premier League and the club has the funds to buy him. Does the club negotiate a buy back price with potential suitors or keep him and work for promotion to the championship?
Login to Quote

k1rups
9 years
After two seasons I have found myself getting disenchanted with this save and find myself wanting to resign from Cambridge, especially after the problems I have had with the board. I will take a break from this save as I have been playing it pretty much every day for the last 4/5 days. Thanks to everyone that has supported me and followed the story and given me their words of encouragement even when I have found myself struggling.

Glenn T
9 years
I'm afraid I've only just read this story so I'm disappointed you want to quit it already. Still it was an awesome effort for a first story and I hope to see you more in the writing scene soon. Keep it up!
1
Login to Quote

Thanks for the support

I wont quit this just yet, I am just taking a break from this save so will be back writing on this one again soon. I do miss the battles I have had in this game but needed to find that excitement about it again and it will be back haha theres no way I'm giving up this challenge just yet
Login to Quote

Thanks for the support

I wont quit this just yet, I am just taking a break from this save so will be back writing on this one again soon. I do miss the battles I have had in this game but needed to find that excitement about it again and it will be back haha theres no way I'm giving up this challenge just yet

This is an amazing story so far, it really is fantastic. I hope you get back to playing and enjoying it soon so I can enjoy some more updates

Emerging news out of Cambridge United. It has been reported that manager Krupesh Shah had taken some unannounced time off from the club and left it in the hands of assistant Michael Stone. It appears the boss was AWOL for a month, some media sources citing he had been so angry with the board he just said "F*CK YOU" to the Chairman and walked away from the club.

That left Michael Stone to finish of the transfer window business and get in to the season with fixtures coming thick and fast. 5 friendlies gave 3 wins, 1 draw and 1 loss but more importantly provided good fitness work.

The league got under way with an away game to Bournemouth, who finished in the playoffs last year and were going to provide a very tough challenge for the U's. Michael was worried. He knew it was going to be a difficult start and had been frantically trying to get in touch with the boss to at least get some advice on who to start and how to play but nothing worked. The only things he had were the tactics Krupesh had been working on before pre season. He had to go with this and use what he could and amazingly came out of the game with a draw. The next match was a home fixture against fellow League One team Preston in the 1st round of the Capital One Cup. The U's smashed them 4-0 to get off to a winning start in the competition and won their 2nd game in the League 3-1 against Stevenage. 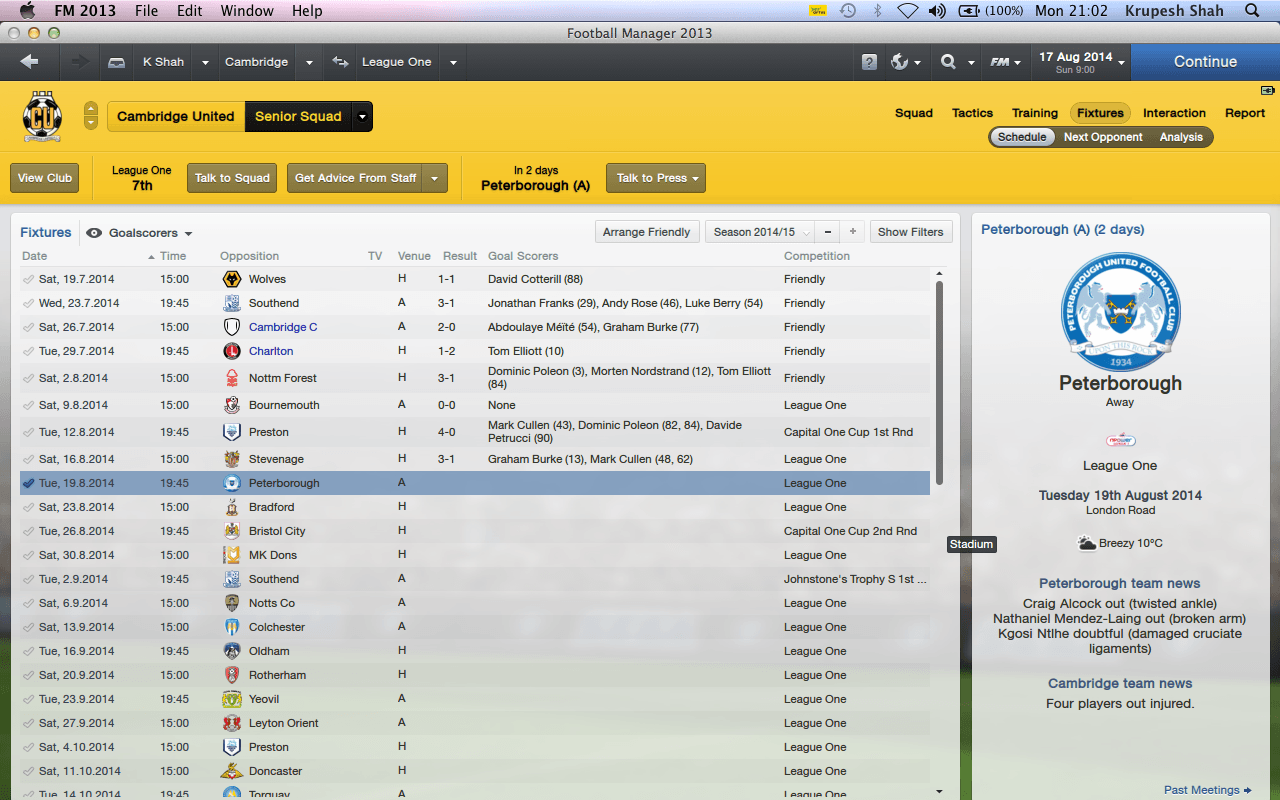 All of a sudden the team were rallying around Assistant Manager Michael Stone and were worrying less about Krupesh. When was he coming back? Where had he gone? Nobody knew but now it seemed nobody cared.
Login to Quote

Louis O.
9 years
Nobody cared? I think you should sack that Stone bloke, that'll teach him to make nobody care about you!
1
Login to Quote

Haha Im contemplating it :p but he's done a good job with the 3 games so I couldnt do that to him
Login to Quote

Sky Sports News reporter Bryan Swanson has fed back some information regarding the precarious situation at Cambridge United. It has now been confirmed that Krupesh Shah did in fact swear at the Chairman and walk out in a strop on the club, in an attempt to resign and chase the Real Sociedad job, which he wasn't even offered.

But it seems as though Paul Barry, the Chairman, has not accepted this as Krupesh's resignation. In fact he has sent in a statement to us here saying he understands Krupesh's frustrations and wants to apologise for not giving him what he requests in order to keep his players. Unfortunately the board are not able to increase the maximum wage due to financial restrictions, which is pretty baffling due to the fact the club have been in back to back promotions and earnt some money through cup competitions. Paul knows what Krupesh has done for the club and wants him to continue because he believes Krupesh is the best man for the job and understands the club in ways no other manager could

Just as Bryan is reporting this he tells us he has seen Krupesh's 1960's Volkswagen Beetle pull in to the training ground. Is this the return of the talented but angry manager? Has his determination swayed?

We will let Bryan go and chase him down and see what he has to report later on today!
Login to Quote