Glenn T
9 years
Brilliant job in League One mate, and some interesting signings too. Premier League doesn't seem too far away!

Jer
9 years
Great win in the League One mate! I'm very anxious to have one of our 'interesting' chats again! Great story with Cambridge! Your goalkeeper seems great!
1
Login to Quote


Cheers mate! Hes a class player and the reason I'm doing this story but we'll see how long he stays with me! Haha it was a good chat :p i look forward to discussing more with you again!
Login to Quote

Pre season was going to be a busy time for us. We had a lot of work to do to make sure this squad would be able to compete. We had already secured some great signings at the end of last season and they were definitely going to help but a big big position we needed to sort out was right back and left back. After signing Adam Smith from Spurs, Kirk Broadfoot on a free, we also loaned Georg Margreitter from Leeds and signed Anele on loan from Cardiff to provide us with cover.

As well as defensive cover our midfield needed a bost as well and we signed Ricardo Vaz Te on loan, Wayne Routledge from Swansea and Rainford Kalaba on a free transfer. This put our summer spending at £2.6 million and didn't leave much else but I was happy with the squad and believed we were ready to make a start in the league. 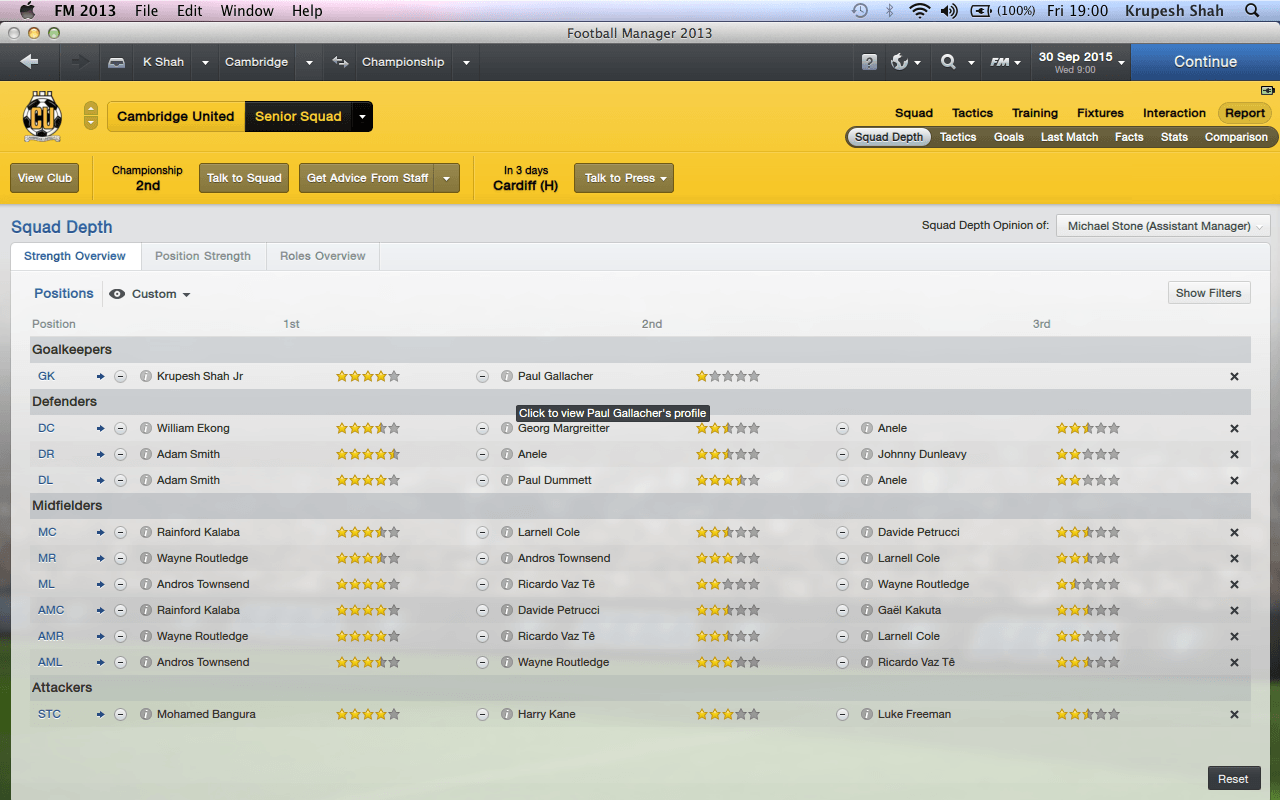 We had 5 pre season matches lined up with only Tottenham Hotspur likely to provide us with a stiff examination but we passed all 5 with flying colours, beating our parent club 2-1 on the way. 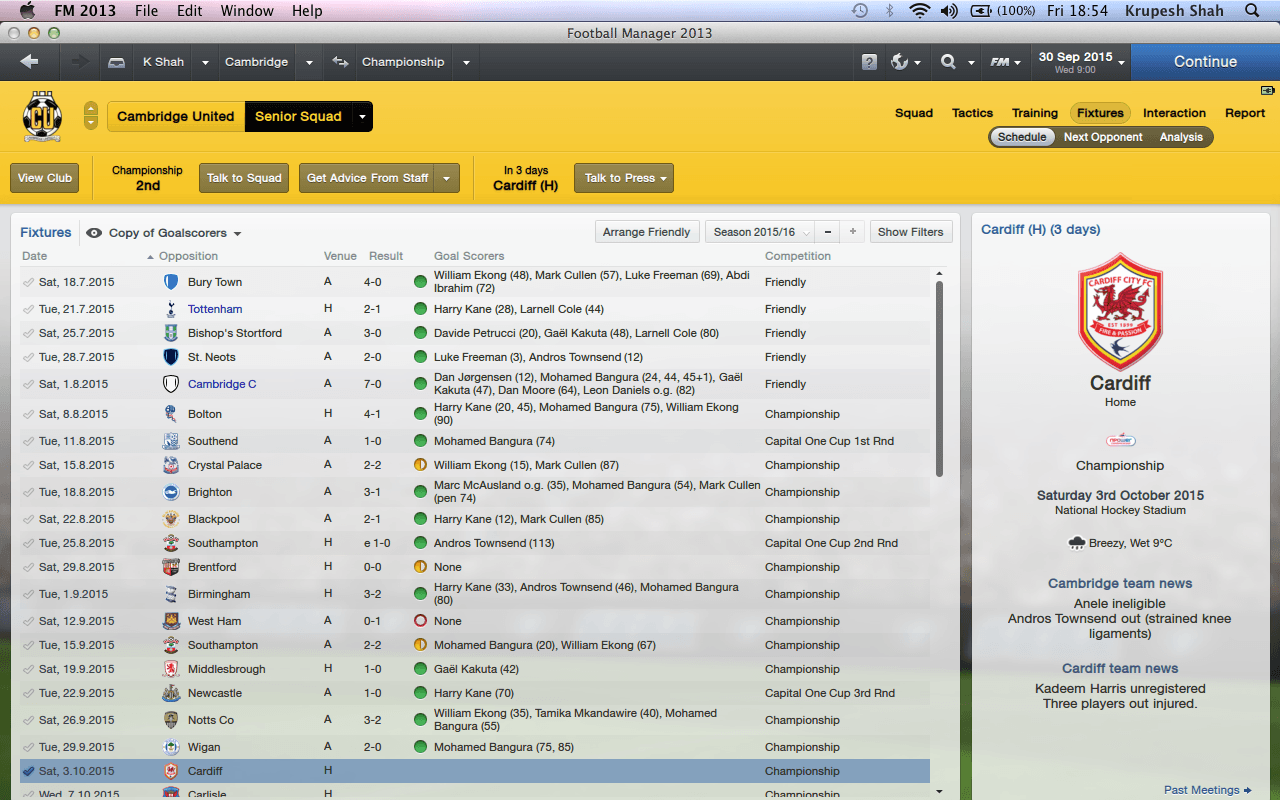 This gave me great confidence in my players and the season ahead. We started the season at home to Bolton Wanderers and produced a great performance to beat them 4-1. The fans really started pouring in and we sold all 7000 season tickets for the first time since I have been in charge. Our first Capital One Cup was against Southend and I put out a weakened squad to see if we could avoid an upset and we scrapped it through 1-0.

The next game in the league was our first away game and the key was to avoid defeat but what is disappointing is we could have come away with a win if it wasn't for a late equalising goal. I wasn't too angry because we played attractive and dominating football.

We progressed through the COC after beating Southampton in extra time with Townsend getting the winning goal but suffered our first loss to West Ham. It was a narrow one away from home and I was hoping we could snatch a late goal but it wasn't to be. The next COC game was against Premiership side Newcastle away from home and we snuck a 1-0 win, setting up a tie against Man Utd at the Theatre of Dreams.

So far, 11 games in to the season we've had an excellent start and I've been surprised as to how well the boys have adapted to this league. Cambridge United are on the up and up and we're motoring away, sitting in 2nd behind Watford but there are 3 teams level on points at the top and it's very tight for any team to pull away yet. 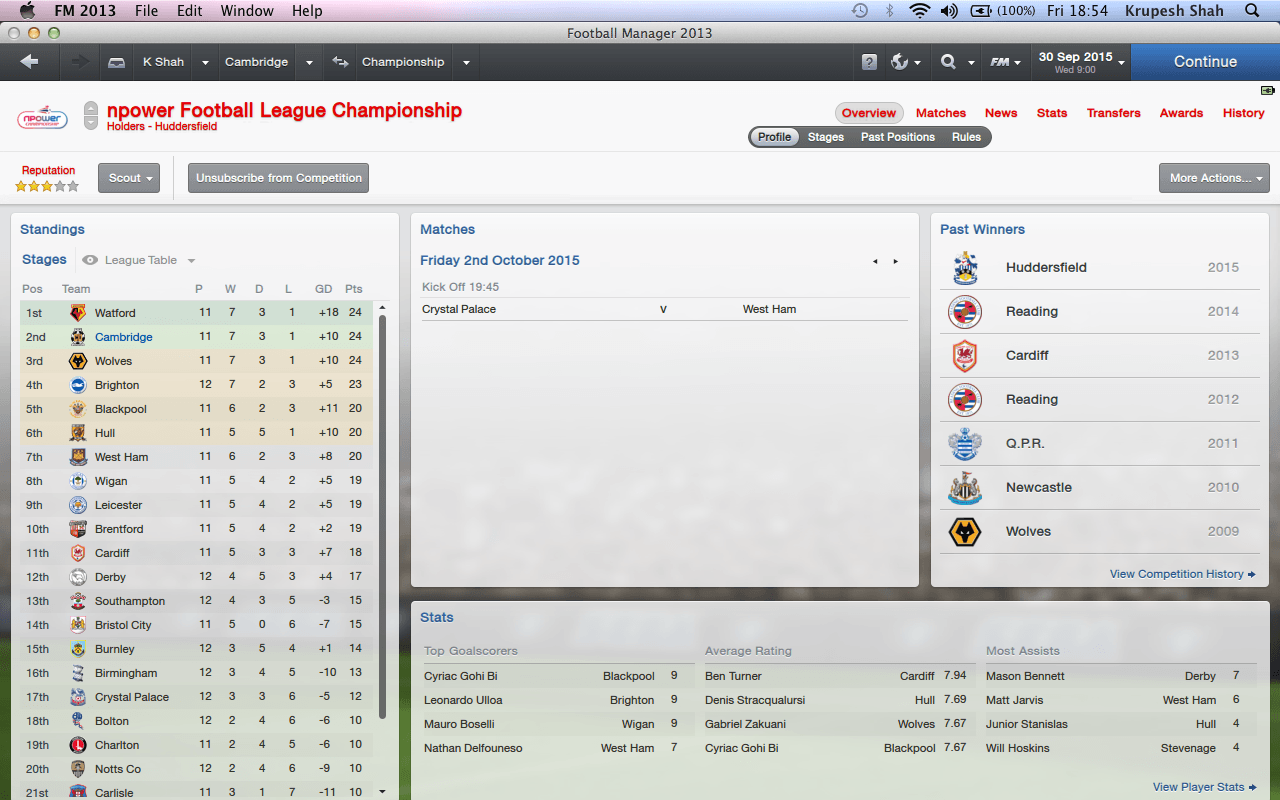 Akash
9 years
Really good work with Cambridge. 2nd place in the Championship early on in the campaign - that is great stuff. Keep this going.
1
Login to Quote

swag
9 years
Well done with Cambridge to come this far. The underdog for SoTM perhaps? Congratulations on securing the League 1 and I can see you getting promotion again, one way or another.
1
Login to Quote

2013-05-10 13:53#99266 lolbaconboy : Well done with Cambridge to come this far. The underdog for SoTM perhaps? Congratulations on securing the League 1 and I can see you getting promotion again, one way or another.

Thanks for the kind words mate I appreciate the support! As for SoTM thats a dream :p this is my first ever attempt so hopefully as I write more and maybe start a different save one day I'll get nominated
Login to Quote

Nathaniel
9 years
You have some quality signings mate!
1
Login to Quote 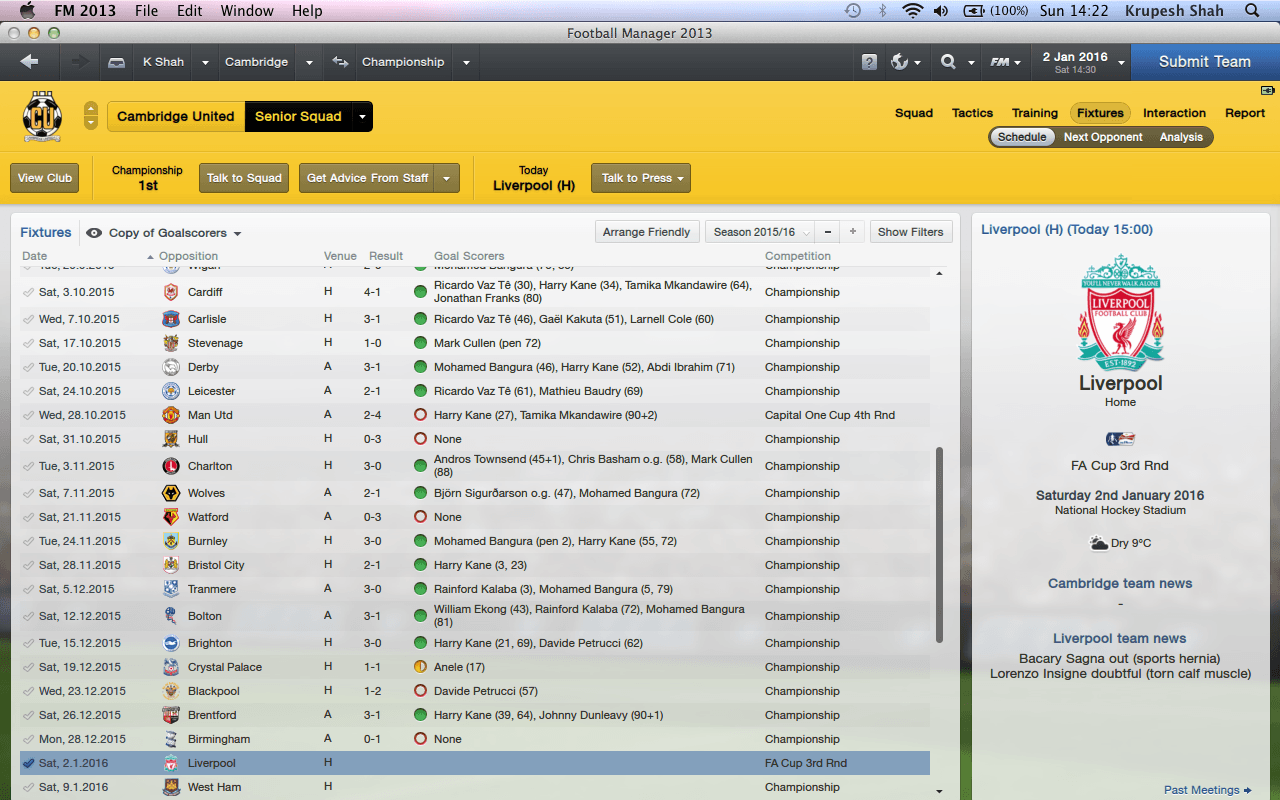 October was a great month until we played Man Utd in the Carling Cup 3rd Round. We knew it would be tough no matter which team they put out and after a run of 5 wins in the league, we got battered at Old Trafford 4-2. We worked hard but I couldn't fault the boys after the effort they made despite the result.

Unfortunately it seemed the effect of that loss was hanging over our heads as we played Hull at home. We just didn't turn up and got beaten very comfortably 3-0. I was livid. This kind of performance wouldn't stand and I let them know. We returned to winning ways against Charlton and followed up with a strong 2-1 win against promotion chasers Wolves. It seemed we were back to our winning ways and then we got battered 3-0 again by Watford, who were table toppers at the time. It was a disappointing performance yet again and I was starting to get worried. We had an amazing start to the season and our boys were tipped for relegation and until now, we had confounded the critics. Were we on the verge of a slide down the table?

I decided it was time to change the tactics and the boys began playing like champions. We went on another great 5 win run and the teams around us fell apart. At one point we were 12 points clear at the top which was a huge shock. Then last 4 games of December brought us down to earth again and we ended up losing 2, drawing 1 and winning 1. 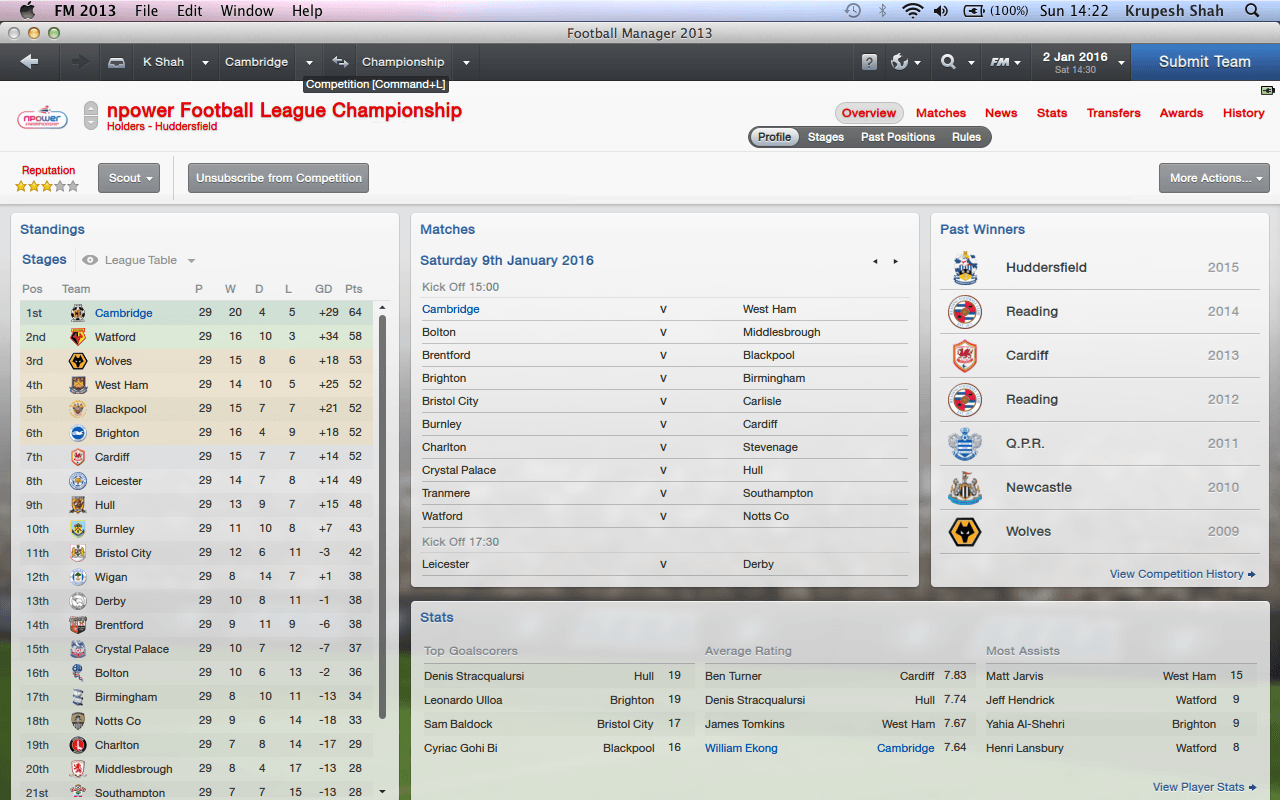 Glenn T
9 years
This is just fantastic - dominating the Championship in your first season up there! Is a title win on the horizon?
1
Login to Quote

Thanks Glenn. I hope to win the title but I'm really disappointed with our history in the cup competitions. If I get promoted my focus will be to improve our fortunes in the cup tournaments while building a stronger squad as time goes on
Login to Quote