Jer
9 years
A great start to the story Beany. It would've been interesting if Henrik would've stayed

Cheers mate! I gave my self 4 years to get to the top division before I move on but looks like it may be one at this rate!
Login to Quote

Another good two months for Ryker


October and November has been very memerable for Ryker in his short career so far as he leads FC Vestsjaelland to a strangle hold at the top of the league table. To top it off FC Vestsjaelland snatched a 2-1 lead agaisnt FC Kobenhavn the current leage leaders in the top division. Ryker will be delighted! 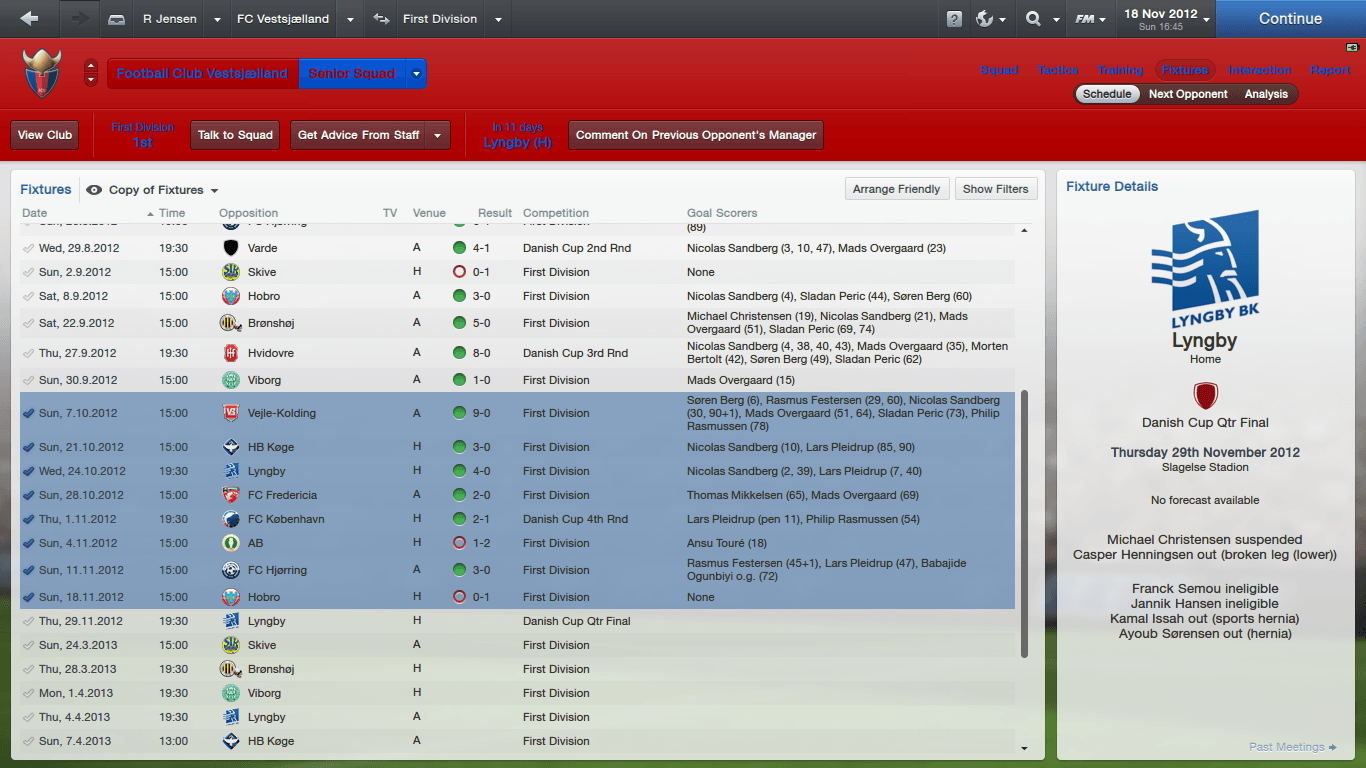 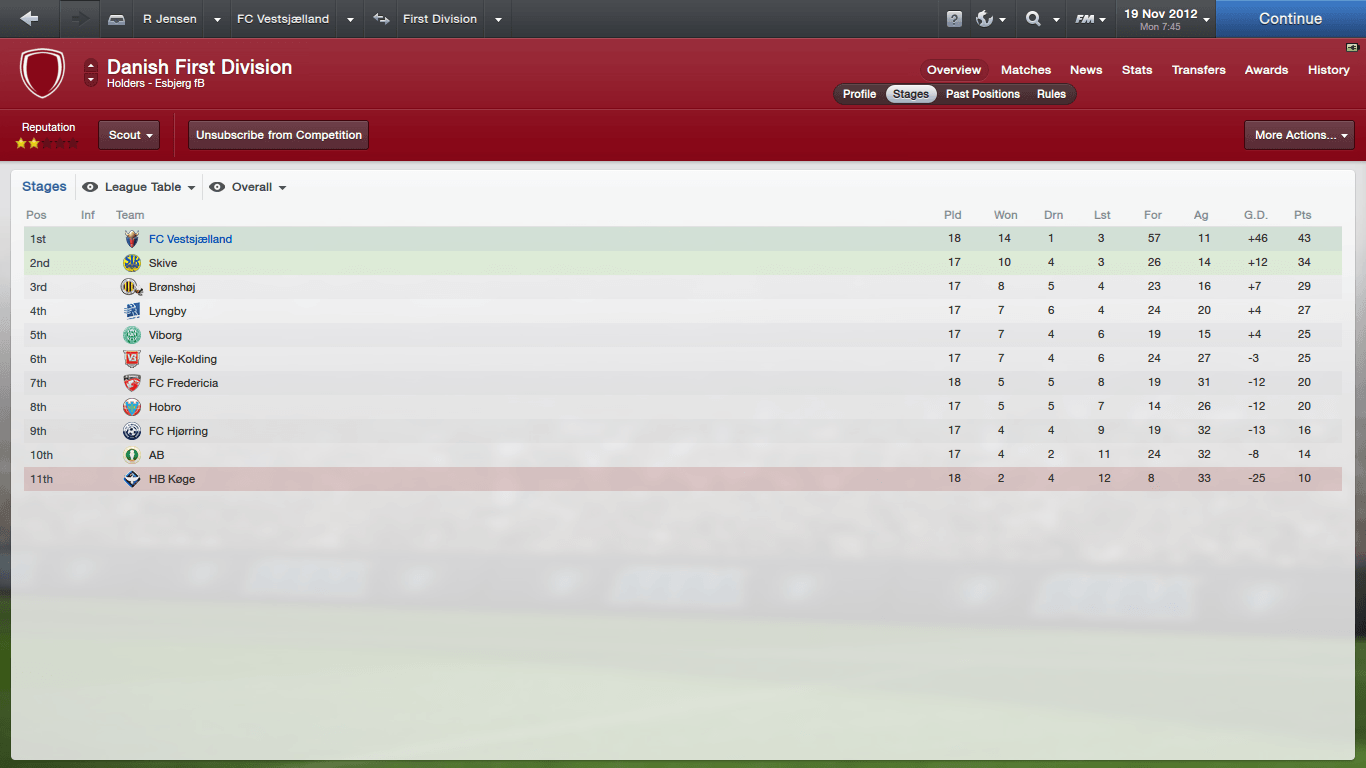 
A stunning result counter attacking football at it's best! All four goals came from counter attacks made in my own half Lyngby could not cope with the direct attack. Ryker with a Jose esque knee slide at full time as the his team reaches the semi-finals! 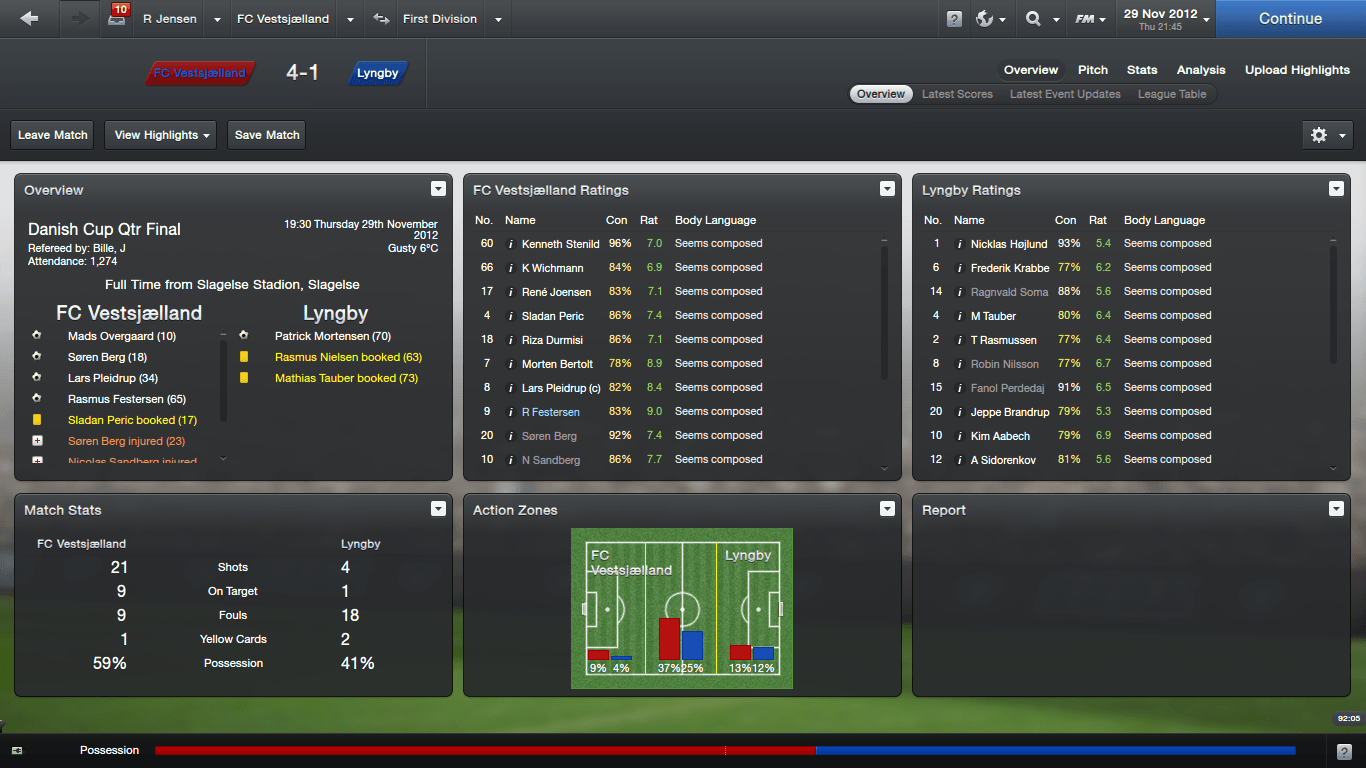 
Another good month for Ryker and his side but sadly the board sold star defender Neilsen.... To Bayern Munich which I do not understand why Munich wanted them especially for £16.5m..... But never mind! 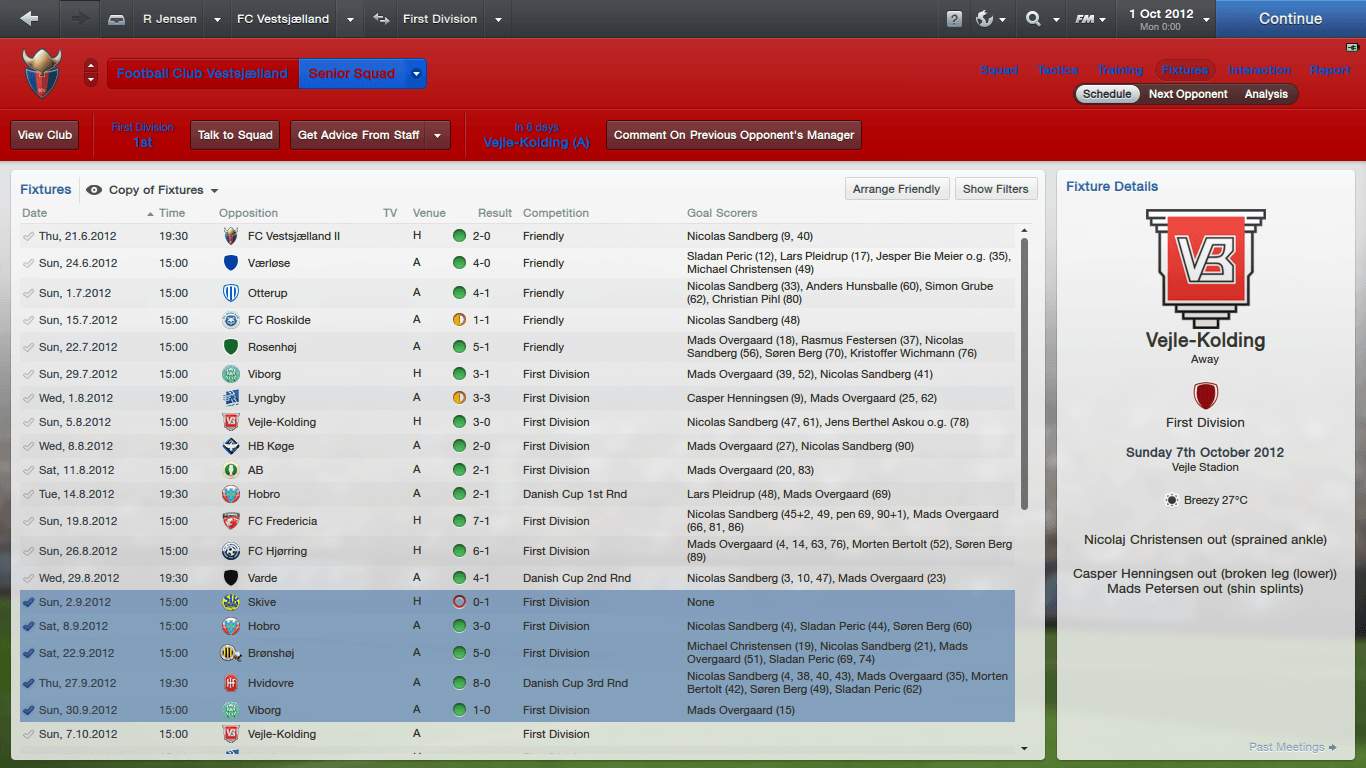 
Another very good month in the league which leaves me 5 points clear at the top! Sadly I suffered my first defeat as FC Vestsjaelland manager to title rivals Skive. More goals scored but again from a counter attacking style. 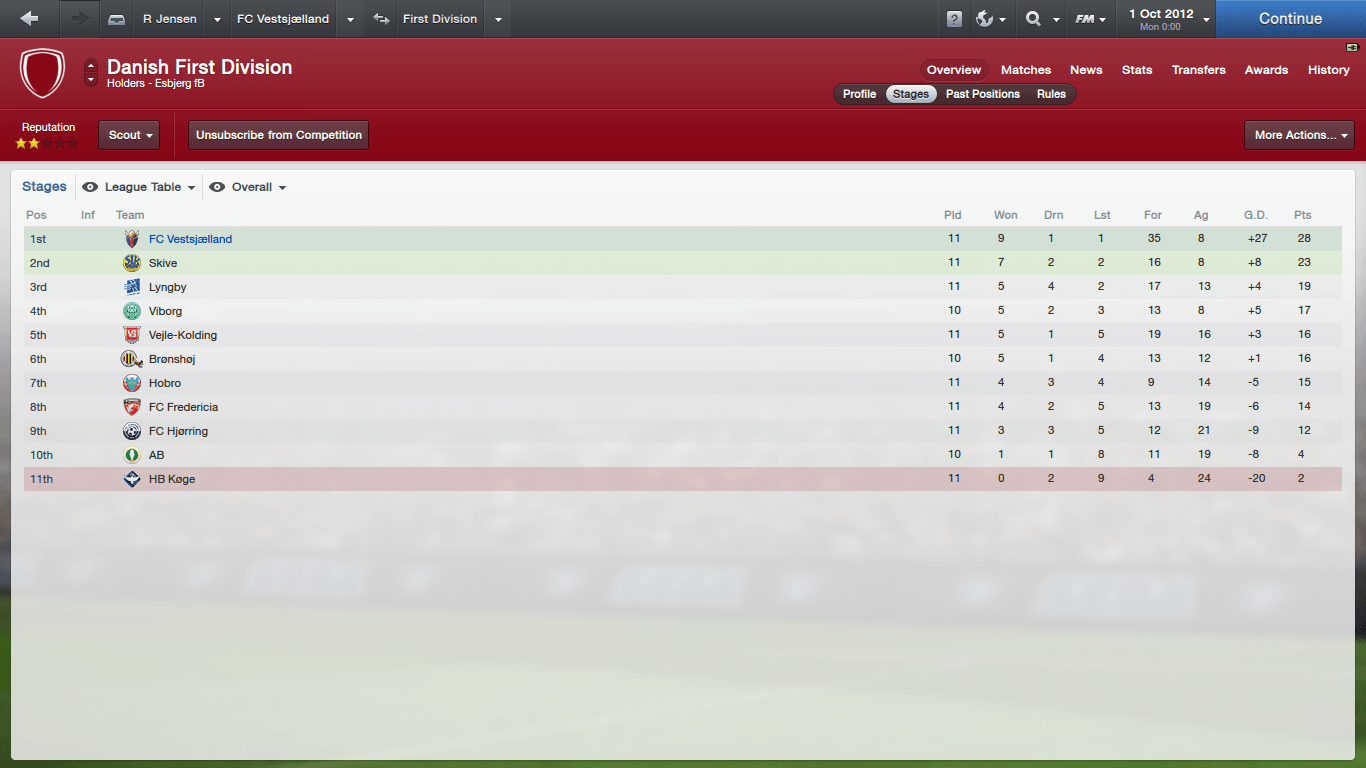 
A huge 8-0 victory but agaisnt a team several leagues below me so won't be to over the top about.


Player Of The Month:
Has to be given to my young keeper Senild who is a top quality shot stopper at this level.

Goal of the month:
Well weridly this month I did not have many good goals as they were all either from counter attacks or set peices so I will give it to Overgaard who scored the only goal agaisnt Viborg from 12 yards out.

No idea why they wanted your defender either, but that's still a good amount of cash for your club. Hope the money will help you out in the future.
Login to Quote

k1rups
9 years
Thats a big transfer fee for a small club that will be useful! Great results and the lead at the top is just getting bigger


Haha massive by this leagues standards! And cheers mate we still a long way to go but I am very comfident promotion is ours


I was enjoying possibly the best start to a managerial career ever witnessed in football. But I was not content. Deep down I knew that this club was not big enough to meet my ambitions all I had done thus far was dominate a extremly weak league any half decent manager could do this. I wanted more from my career, I knew he was worshiped at this club but worship is not what I crave.... I want to be remembered as a managerial legend.... A football legend.

I looked down at my phone and saw the wallpaper. Sir Alex Ferguson.. I dreamed of being as good as him or even partially as good as him. But I was yet to reach these heights. I knew now what to do, but since I only managed a small Danish side it was not certain to work. I pick up my phone and go on recent calls Manchester United were at the top, I pressed dial.

MUFC= Hello this is Manchetser United Football Club. How may I help you?

R= Hi I am Ryker Jenses..... You brought a player of me a few months ago, this isn't about him but maybe you would rememeber me more becuase of that..

R= Uhmmm it is a request that I am sure won't work but I was wondering if I could talk to Sir Alex Ferguson about my career and advice?

MUFC= You want to talk to Sir Alex???

MUFC= Ok he is in is office I will ask him if he wants to talk.

R= Thank you very much

I stared at the phone in complete shock. I did not expect to get through but to be cut off was a bit harsh in my view! Maybe they are still angry I swore at Pellgrini I mumbled to my self. I was startled when the phone rang again.. Surely not Sir Alex I thought?

SAF= Quite alright Ryker. I have been following your career closely you know Ryker I think you can make it is this game.

R= Wow thank you so much Sir! That means a lot to me. I am a huge fan of yours and was wondering if you could give me any advice?

SAF= Of course what is it?

Ryker= Well I want to have a career like yours, small club, to bigger club in the same country then on to a prem club who are struggling and stay for a longtime and win trophies. But I think I am getting promotion to fast, other teams may yet take me...

SAF= You mean you wish to leave your current club to a bigger club. If so I say the cup is massive to your ambitions. Win that top tier teams will now take more notice. You can do it Ryker just beleive in yourself! Ryker I have to go now, I will keep in touch over the rest of the season though. Good luck.

R= Thank you very much Sir Alex all the best to you.

I sent a text to the chairman telling him to get the press sorted as I have an announcement to make. The world will soon pay attention to me!


I want immortality!
Login to Quote

Glenn T
9 years
Great start Beany! Good luck for the rest of the season. Pity about your jackass chairman but at least you have got some cash. 18 million for a Danish side, wow

k1rups
9 years
Haha that's a quality update...immortality shall be yours!!!
Login to Quote

Thanks mate! A lot of money for my side I know!

Louis O.
9 years
Ryker gets to chat to SAF? No fair


Cheers mate! I recently watched Troy for the 1000th time and thought the immortality quotes were pretty great!
Login to Quote

Haha I am SAF

Maybe he likes how I swore at Pellgrini!
Login to Quote