Winter Break and First Month Of Games Back


I looked out of my office window onto a pitch that could easily be mistaken as playing field in a run don estate. But the fans didn't care I laughed to my self as I thought about everything that had gone on this season. I have humiliated the rest of the league and in four days will manage in the biggest game of my life so far. I turned to my TV which was a quarter of the way thorugh Troy, when I heard my favourite quote which summed up my career and ambitions.

"My brothers of the sword! I would rather fight beside you than any army of thousands! Let no man forget how menacing we are! We are lions! Do you know what's there, waiting beyond that beach? Immortality! Take it! It's yours!" -

I looked down at my phone which showed one text. " Why did you not turn up to the press conference???" I laughed as I read it, the chairman thought he could tell me what to do. I won't listen to him I am Ryker and I will take immortality on my own! 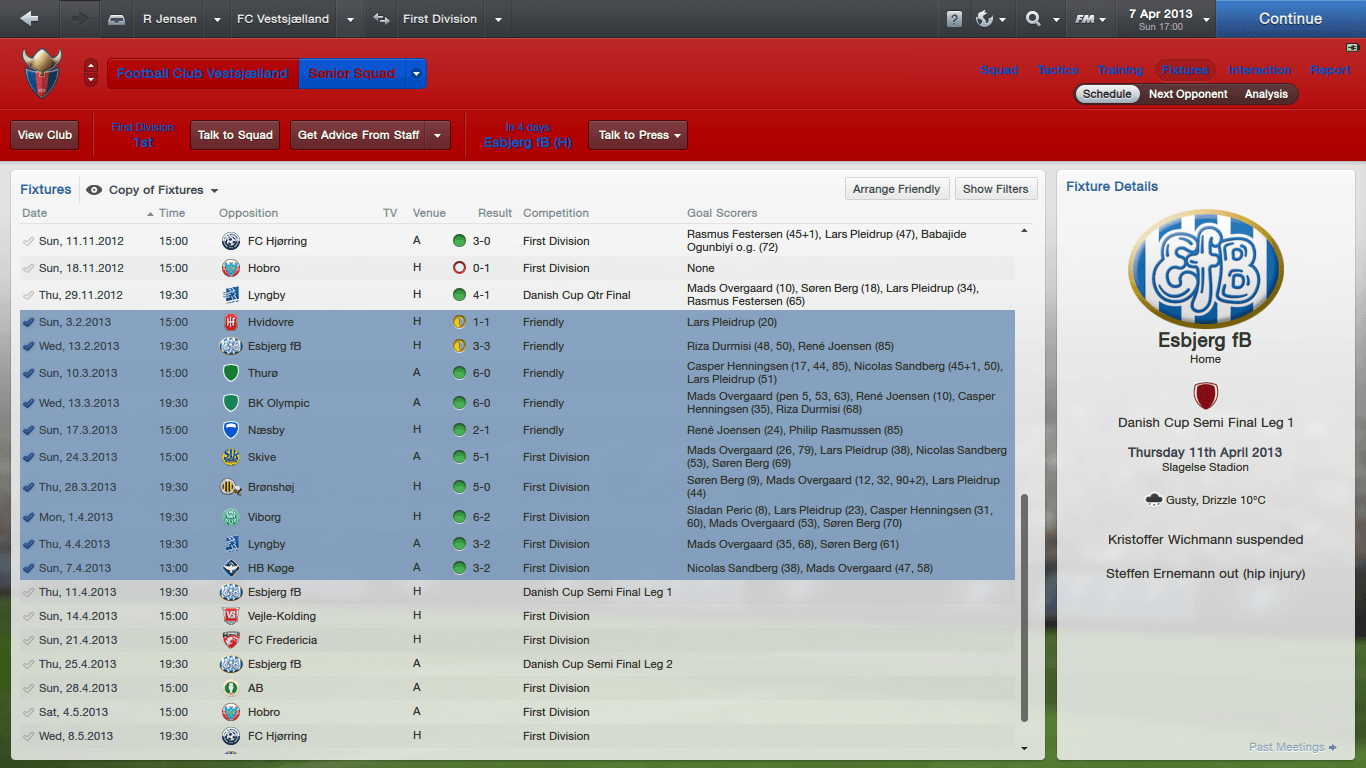 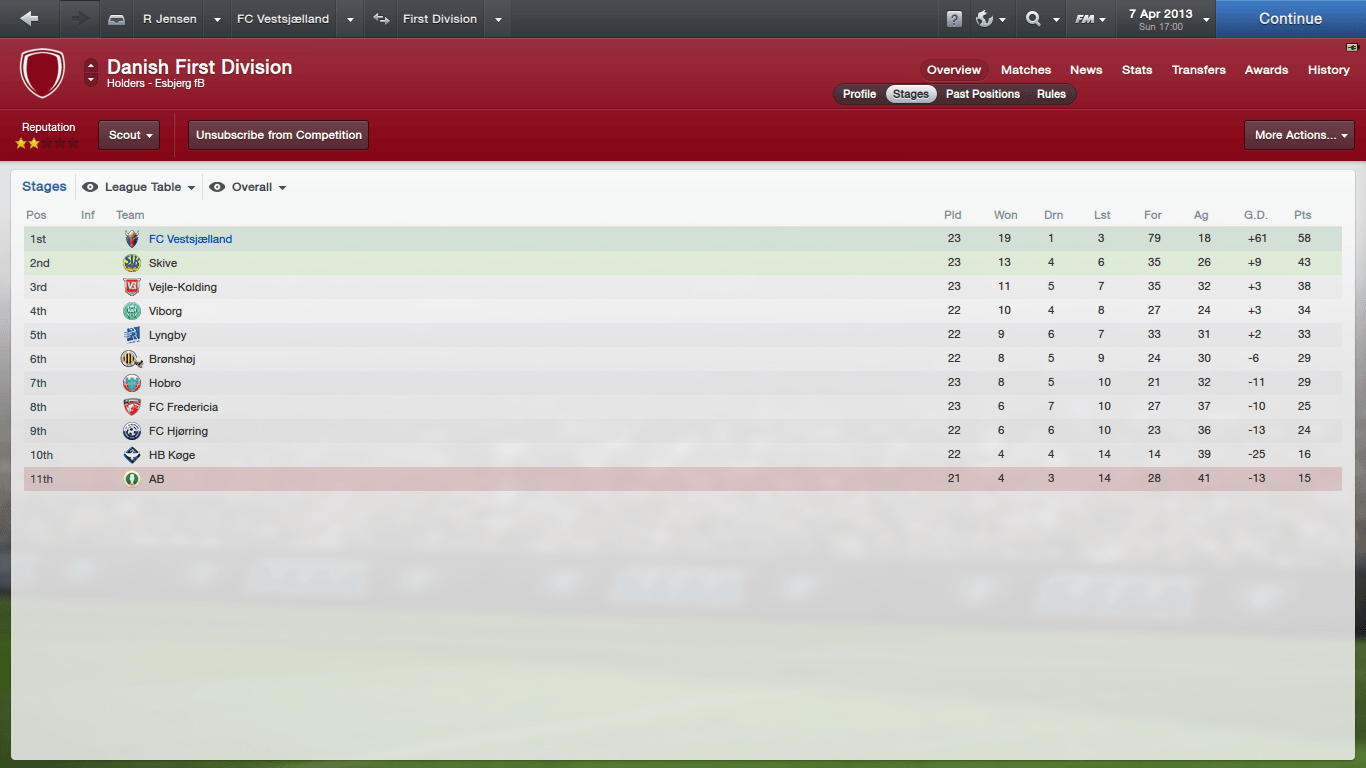 Louis O.
9 years
I'm confused. Are you immortal or not?

It's Rykers dream to be immortal!


I jogged around the back of the stadium a few times a sweat growing on my brow, I was not one to get nervous before matches but this was different. I was bricking it, my chance to announce my self to the whole of Danish football is already here. I had sent my players out for a light warm up before the team talk, anything to be given some alone time with my thoughts. It was not a good idea. What if I lost? What if we were humiliated? What if I was humiliated? Anything could happen and I was not sure it would be good. Todays opponents were easily beatble the second worse team in the league above the so called 'Superliga' I have shown already this season it is not to super after all!

I entered the hone changing rooms and saw my players sitting nervously on their allocated seats. This was the biggest game of all their careers, forget the season so far it was all about today. I looked at them one by one and the confidence rise in each of them was obvious. I was their God I was the man who had turned them into household names they all trusted me to do what is right. I knew this was a moment to use my favourite Troy quote. It summe up the moment perfectly. I jumped onto the nearest table and all attention turned to me.... Time for the rallying talk the war cry before our match. This would make or break us!

I looked at them for a moment before recting my quote of choice of by hear with passion dripping from every word My brothers of the sword! I would rather fight beside you than any army of thousands! Let no man forget how menacing we are! We are lions! Do you know what's there, waiting beyond that beach? Immortality! Take it! It's yours!" -

The response was what I wanted the players stood up and joined in my rallying shouts! We were ready the opposition did not stand a chance! 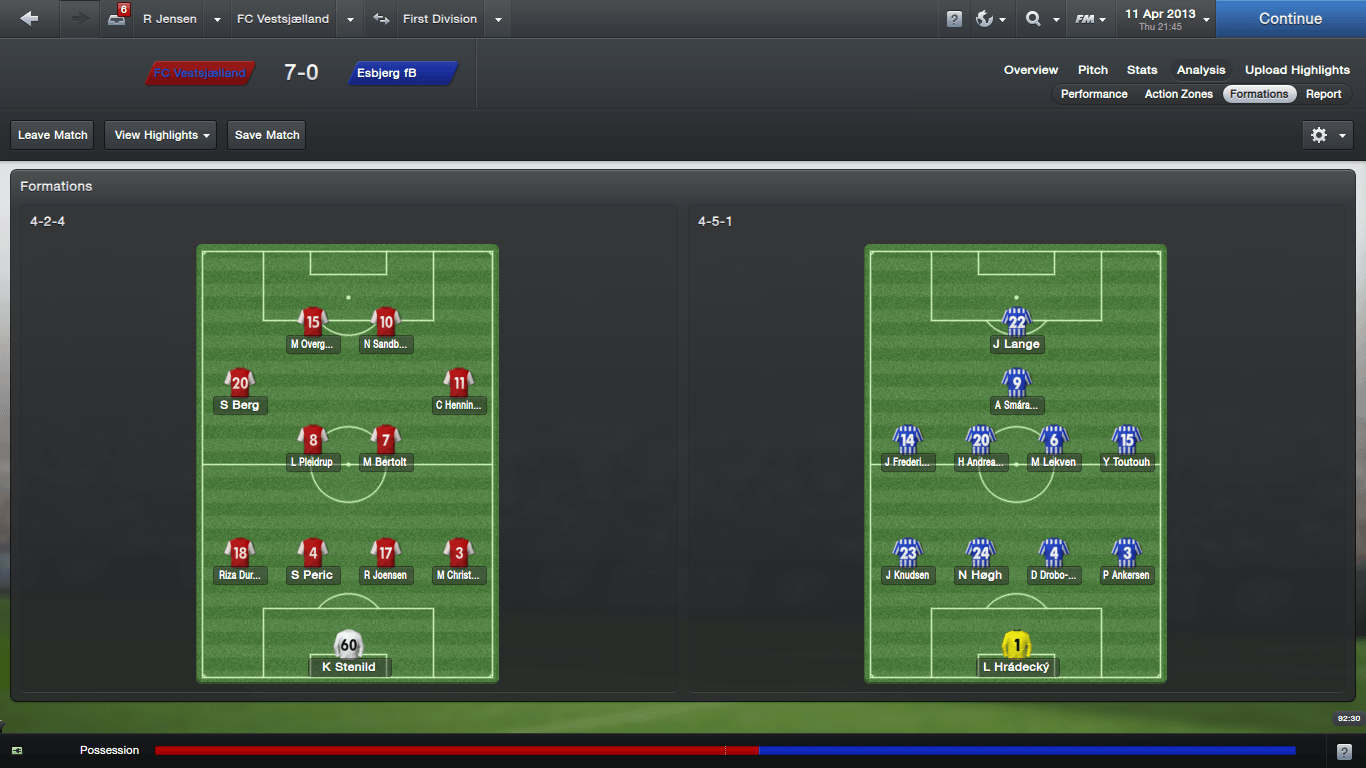 I have stuck with this team all season and they had not let me down I beleived they will do me proude again!

The Match From The View Of Ryker


I took my seat in the dugout I listend for a moment to the 1000 strong home fans shouting ym name and inside a felt a pang of guilt that I was going to leave them. But then I thought to my self... A man like me should be in a stadium with tens of thousands not a thousand and the guilt left me.

The match kicked off and for 18 minutes it was normal service for my side. We stood back and allowed pressure to come at us. Then we broke away and Sandberg scored a screamer from 30 yards out! I just stood their in shock as the stadium exploded we were ahead! Things escalated after that we were untouchble! I witnessed Peric score a thumping header after 28 minutes and just minutes later Pleidrup score another stunning goal this time from 25 yards out. I was in shock and my half time talk took care of it's self. I could not beleive what I was seeing!

Two minutes into the second half Overgaard scored a penalty and I just dropped to my knees! I knew we were on the way to the final we were not going to be stopped now! We were there with a game and a half still to play. The away fans started to leave early and I was loving it! Sandberg then scored a direct free kick after 53 minutes and then scored a header from Pleidrup's curving free-kick! I was so happy for him he had his hat-trick and we all knew we had won the tie already. Berg then scored a penalty on 90 minutes to round it off 7-0!!! I was just walked into the dressing room and broke into tears! I could taste my dream!!! 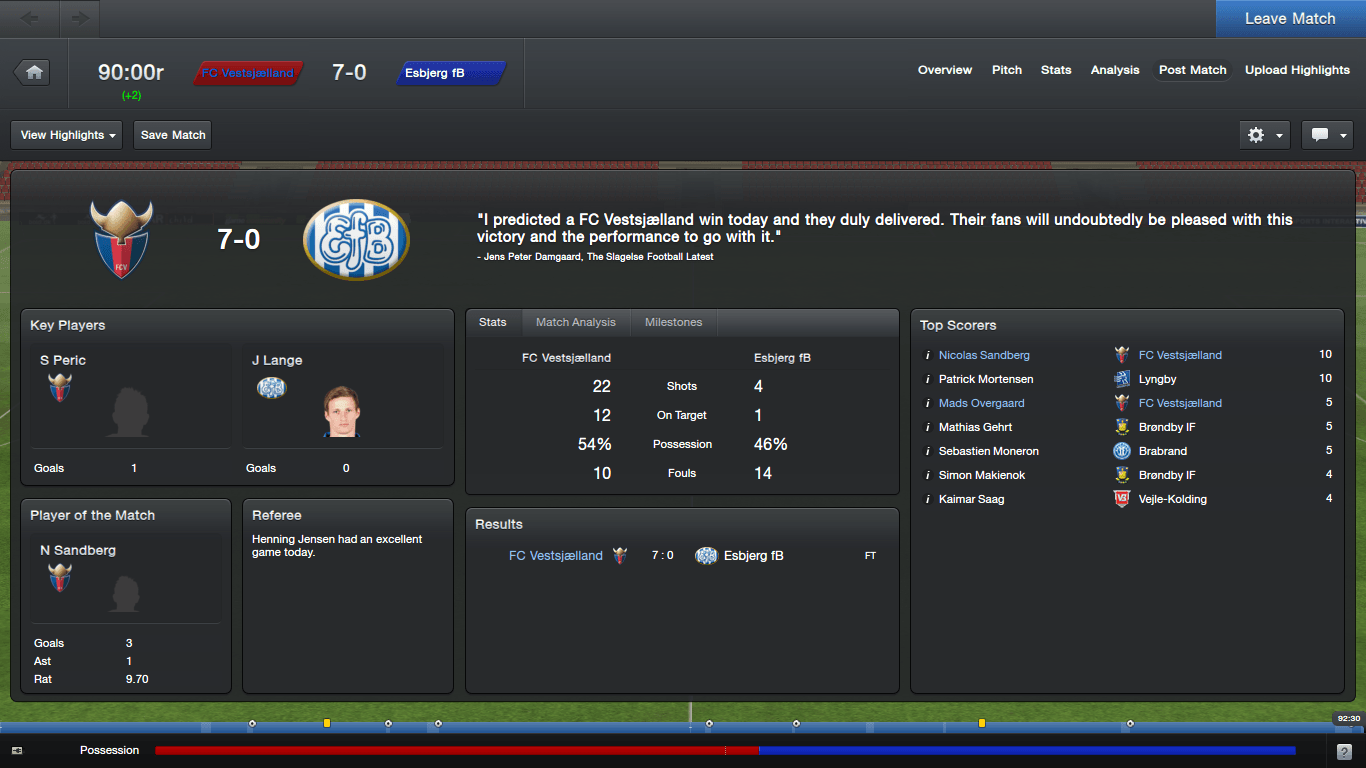 k1rups
9 years
Quality result mate! You are on your way to becoming immortal :p
Login to Quote

RamKebab
9 years
Go on and win it now!
Login to Quote


Last nights match still sat clear in my mind. A thumping 9-0 win and we have secured promotion now. The title is not far behind only a game or to now. But I was not happy. It felt pointless.... no one will remember me if I stay at this so called 'club' I need a move and soon if I am to be remembered when I am long gone. I need to move now!

I walked into the board room to a standing ovation from the board memebers and the fans that had been invited to this so called momentus occasion. But I still was not happy, this was not a big deal. We got promoted to the top league so what! Are this teams ambitions really that low! I was shocked at how happy they were. Winning the Superliag or the Danish cup is a momentus occasion but getting promoted is not. We need bigger goals this year, why else have players decided to leave becuase of the size of the club! I looked around in silence and the and the baord room went silent I felt sick to my stomache that this is all they aim for! I am happy that we did get promoted but I heard quotes such as "Greatest day of my life" I nearly laughed! If this was there greatest day they evidently have not had a very good life so far! I looked the chairman in the eyes.

"How much do you want me at this club?" I asked bluntly.
"We will do anything Ryker.... why whats going on?" the chairman sounded scared I could hear it in his voice, see it in his eys. He was terrified without me this club is nothing.
"I want to leave for a bigger Danish club next year,our ambitions are not on the same level. Promise though if I do not find another club you will give me another contract. Promise it."
The baord and chairman stood in silence until eventually the chairman looked at me. "Why should I" he asked.
"If you do not you will lose me no matter what" I replied casually. With that I walked out and shut the door.
Login to Quote

Louis O.
9 years
I hope you get the new deal!
Login to Quote

Arvind
9 years
Obviously too big for the club. They should thank their lucky stars they even had you for one season


Time will tell!
Login to Quote


Today in a historic match for FC they won the Danish First Division title with five games to go. But while fans were estatic camera crews crowded round Jensen in anticipation of his celebration from a man that did knee slide down the entire touch line when his side scored the first in the Danish Cup quarter finals. But today there was no knee slides, no fist pumps and no emphatic shouts of YES!

He merely shook hands with the opposition manager and asistant manager, clapped the fans half-heartedly and walked down the tunnel. A silloute in the darkness that will not be forgotten for a long time.


I waited for the minutes to tick down until I could escapre this shammbles of a fan base. Title deciding day and we only get 1,273 fans. 300 less than the last two matches! Embarrising! I am ashamed to be part of this club, the players are struggling to play here as well so many are jumping ship.... Only a few moments till the nightmare is over! I can not beleive the fans managed to dampen my day. I won them this trophy and they have stopped me from even celebrating today! Suddenly I heard the whistle loud and clear in my ear. We were champions of the First Division... But I barely cared anymore. I realised long ago I have no say at this club and the outer world will only recognise me if I win the cup instead. I walked down the tunnel to escpape my misery............ A manager should never feel like this.
Login to Quote