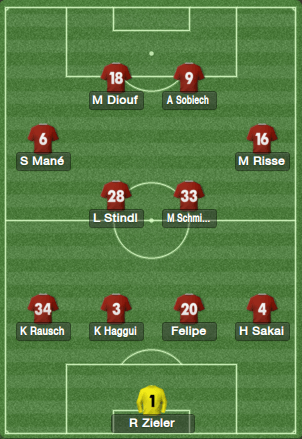 I decided on this from after comparing Artur Sobiech and Mame Diouf. Whilst comparing them I saw the complete difference. Diouf is physically capable. He is fast and agile, where as Sobiech is technically and mentally smart. So by playing Diouf as an AF and Sobiech as a DLF, I was able to evenly distribute play. Where Sobiech was my target man picking up the ball and working space to have shot or pass to Diouf.
Login to Quote

Deep into december Hannover and co have found themselves in the unlikely spot of third below super powers Munich and Dortmund. Pundits suggested that Hannover were destined for another mid table finish, similar to last seasons when crowd favorite Mirko Slomka was in charge. A funny view to many eyes, as it seems that Hannover have all the pieces to compete for a top four finish but, consistently failed to do so. Minus Slomka's break into top four in the season of 2010/11. Zeeb has thrashed the pundits initial predictions and it is not so much by the position he has Hannover in but, it is how quickly he has done it.

With the Hannover board fully confident that Zeeb will bring back a top four finish by the end of the season. Fans can presume that fresh funds will be made available for the young German manager. Talks of a new midfielder coming in and a definite right back addition also on the list; it looks to be an eventful transfer window with Die Roten.

Verdinho
9 years
Having a great season so far. Keep it up, story is looking sweet!
1
Login to Quote

Hannover confirmed their advance into the next stage of the Europa league when they beat Sheriff 3-1. Leaving a game to go out on where the result didn't matter. To Zeeb's happiness their last game would be against Newcastle. Stating in a press conference prior to the Sheriff game, "Playing a team like Newcastle in the last game of the group stage, is wonderful. This game can be almost treated as a friendly against a strong international club. Even more fortunately we get to play them at home which avoids the threat of fatigue when we have games against Bundesliga sides. I am sure though that Alan Pardew will hardly treat the game as a friendly with his neck on the line. It has to be said that his club performance has been surprising and not in a good way." With Newcastle not one having single win in the Europa they will surely be looking to leave the competition with some dignity. Yet another interesting twist of events in the Bundesliga before the winter break. The most entertaining of matches happened at the Weserstadion as Bayern Munich took on Werder Bremen away from home. Munich striker Gomez put in a player of the week performance scoring no less than four goals; one being a penalty given away just after half time. The game ended 6-4 to Bayern Munich. For most of the match Munich were in control until the 80th minute when they were up 6-2. Bremen struck in two unlikely goals in the last ten minutes, to make the loss a little more tolerable finishing with four goals. Super power rivals Dortmund couldn't get one past Leverkusen as they went 0-0 away from home. To add to Dortmund's disappointing display left back Marcel Schmelzer was sent off on the 87th minute as received his second yellow card of the game.

Jozef
9 years
Great win over a strong side, keep it up and you could be in the Champions League next season.
1
Login to Quote

Dragovic was and is hailed as one of Austria brightest stars. His physical presence along with his mentality make him a force to be reckoned with to oncoming strikers. Dragovic made 49 appearances in his three seasons with the Swiss club FC Basel. This put him on the radar for Hannover as Zeeb stated early on in the rumours and speculation that he adored the young defender, and stated that the Austrian was destined to become a huge name in the footballing world.

Since Dragovic's transfer to the AWD-Arena for 3.5 million Euro's he has been instrumental in the sides defence. Mainly playing in most of Hannover's Europa League fixtures. Pundits theorize that his appointment to Europa games is due to the fact that Zeeb is trying to work him into the team. With three other top notch center backs this is definitely the case. Djourou and Haggui are perhaps some of the strongest center backs in the league so far, form wise. This makes life difficult for Dragovic and also his Brazilian co-worker Felipe who are both looking to break into a regular starting XI spot. This won't take long for Dragovic if keeps his head up and keeps on playing like he has. We could potentially be seeing him in the starting XI a lot more. Having an average rating of 7.54 so far this season this definitely determines the theory.

Like all players though there is always something that needs to be worked on. Dragovic in this case has been known to be a little too aggressive at times leading to unnecessary cards. For example his straight red for a violent push in the game against Newcastle earlier this season. Along with his aggressiveness needing to be turned down slightly, he needs to define himself in the squad. His performances have been satisfactory so far but there hasn't been any attribute or action that has highlighted Dragovic to Zeeb as of yet. To which would put him on the sheet a lot more. 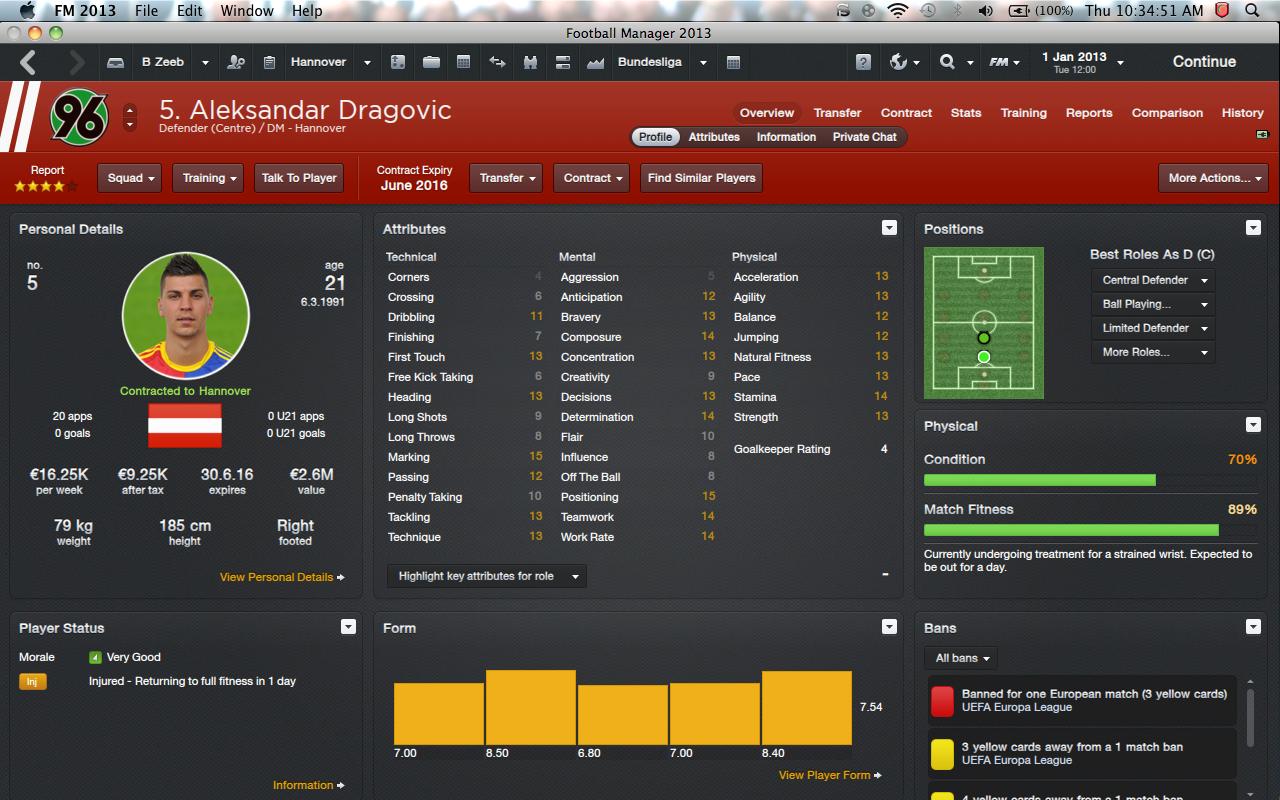 Verdinho
9 years
Awesome update on Dragovic. Grinding out the results too. Halfway through and you look good for Champions' League quals
1
Login to Quote

After Mame Diouf's impressive displays in the Bundesliga for Hannover has awarded him with not only African Striker of the Year but, also African player of the year.

Mame Diouf has found himself spear-heading the frontline in recent times at HAnnover after a dip in form from Polish co-worker Artur Sobiech. Diouf has managed to bag 11 goals in 16 appearances for the German side and undoubtedly Zeeb will be looking for more from the Senegal international. This confirmed as only last month Diouf signed a new deal with Hannover earning him what is thought to be 45K a week. 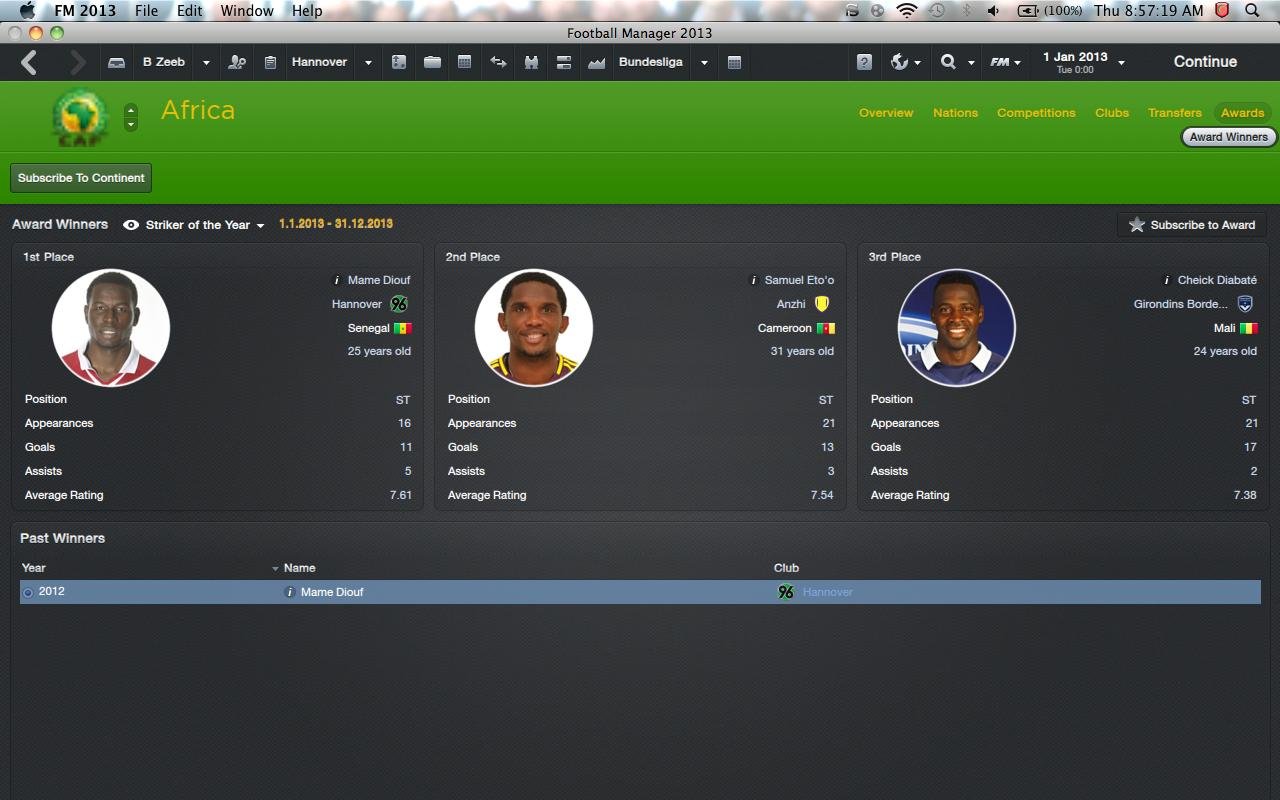 28 year old Karim Haggui was the other Hannover player to get an award. After a strong start to the season Haggui had managed to find himself with the African Defender of the Year award. This came through his 7.64 average and the 7 goals he bagged in 22 appearances. Quite a fate for a center back. All of them were from corners but none the less they were goals to tally towards Hannover's impressive run this season. 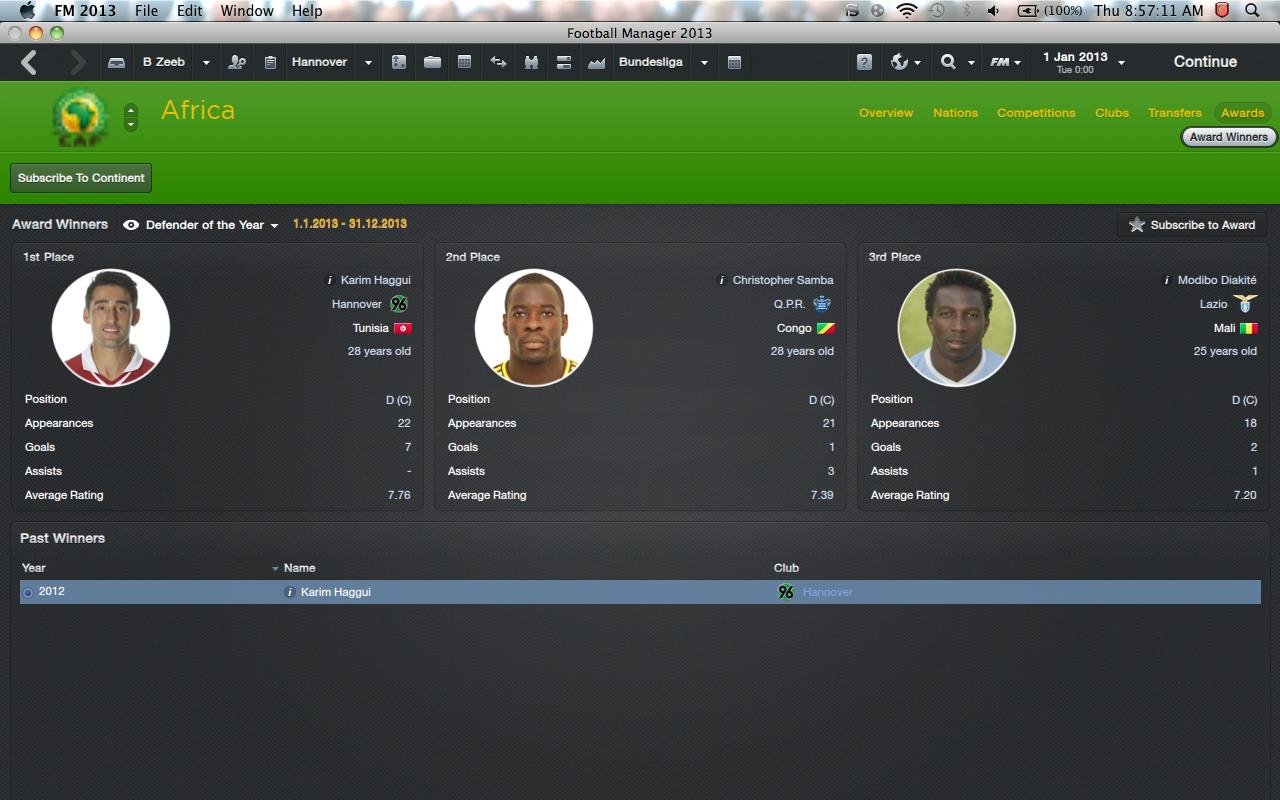 Both Haggui and Diouf were named in the African team of the Year. Along with Left winger Sadio Mane to many peoples surprise. 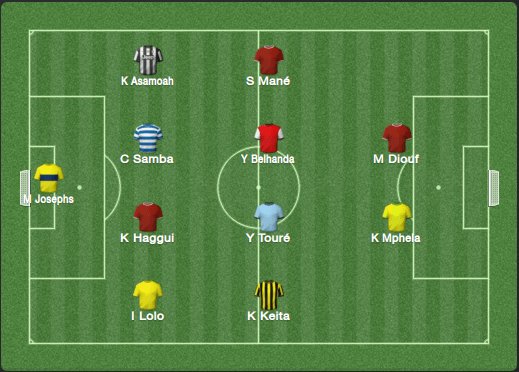 Hannover 96 have drawn Spanish club Malaga in the first Europa knockout round. Hannover topped their group in the Europa this season while Malaga fell short of 1st place in Group K to French club Lille.

Malaga have failed to keep up with League expectations this season dropping two positions shy of 7th. None the less Hannover will have to be on the look out as Malaga star Isco is a definite threat. Along with Isco, Jeremy Toulalan possess the skill to change games. These two players Hannover will have to deal with. 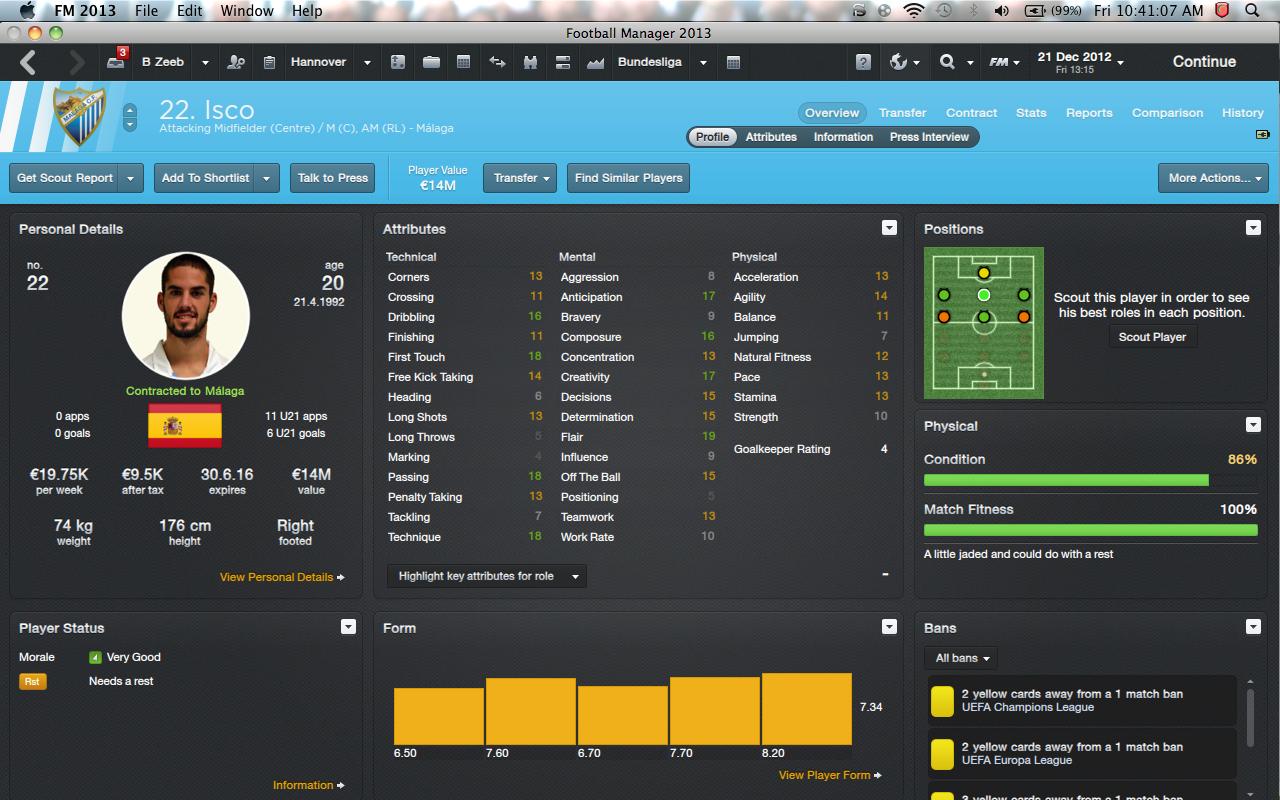