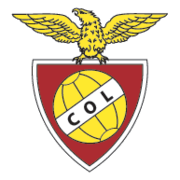 
Clube Oriental de Lisboa is a semi-professional football club based in Lisboa, Portugal. They compete in the Second Division - South (which is the Third Division). They play home games at the 'Campo Engheneiro Carlos Salema' in Lisboa, right near the Estadio Jose Alvalade.

Oriental, as they are commonly known, were formed on 8 August 1946 when three clubs, Chelas F.C, Marvilense F.C and Os Fosforos, merged together. All athletes and members of those three clubs joined together to make Oriental. Oriental is based in the eastern side of Lisbon and represents the working class population of the area.

These are kits made on the Smart Kit Designer. I still need to work out how to put them on the game if anybody can explain in an understandable way 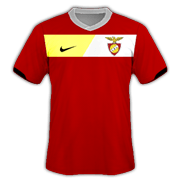 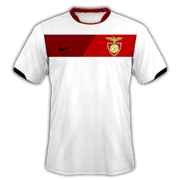 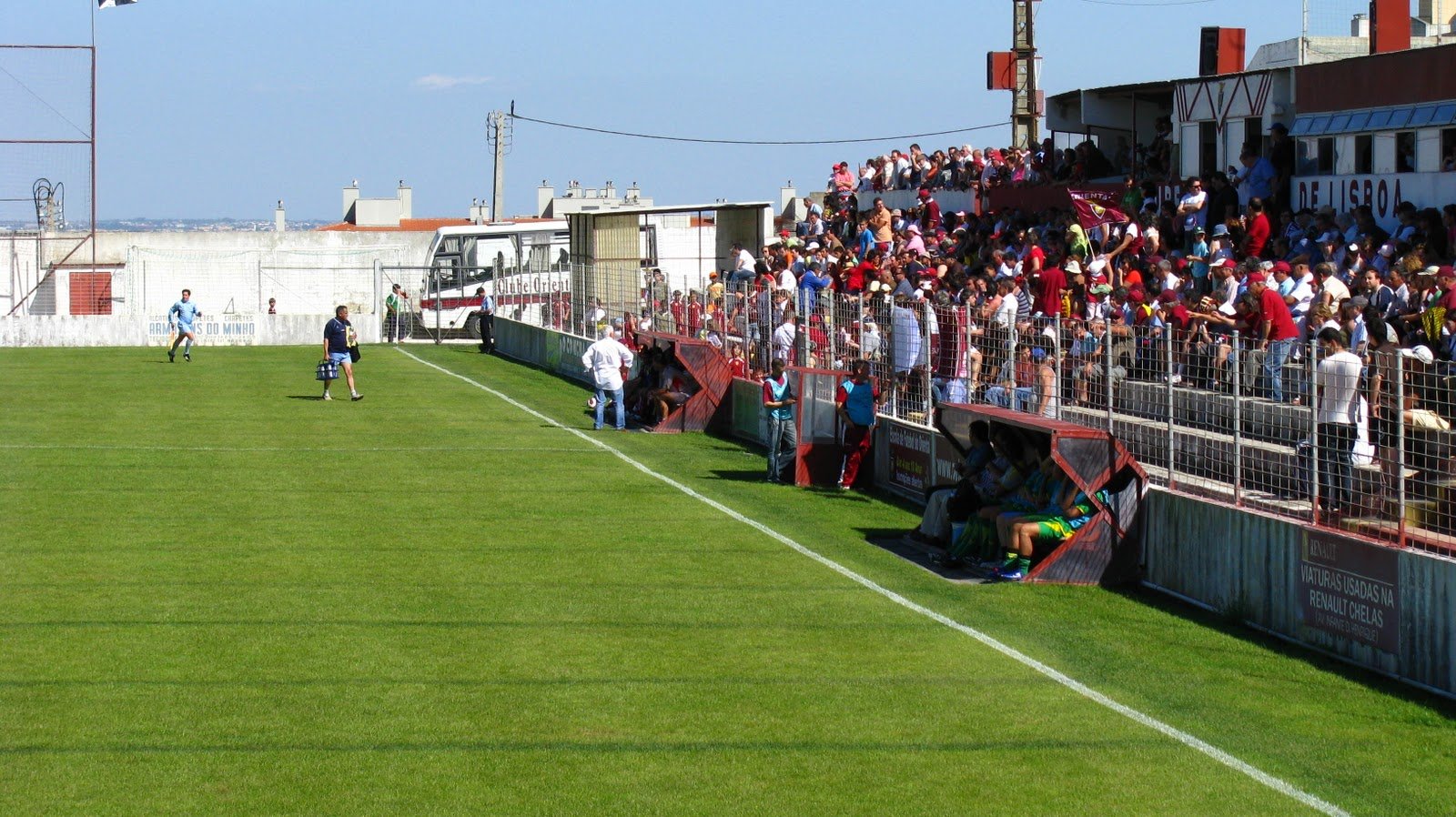 Oriental don't have many rivals seeing as thought other Lisbon clubs SL Benfica and Sporting CP are in the higher reaches of the Portuguese football system. That leaves CF Benfica as the only real rivals. Both teams play in the third division and both come from Lisbon.

The manager will be a ficitional character made up by me, this story won't be as focused on the manager as my other story but it will switch around between results updates and the manager's thoughts. I will still be going with my Derrick Smythe story but I will do this at the same time. Thanks for reading

BACKGROUND: This story is heavily based on Northwood's C.D Constáncia story and also DeanByrne's Paris FC story, all though, it is not entirely based upon them, only the team I chose was (third division struggling team).

EDIT: Check your bbcodes, they are kinda screwed up..
Login to Quote

Walter
7 years
Kane Thanks, which ones are stuffed up?
Login to Quote

I cant tell, but if you ask a moderator I'm sure they'll be happy to help!
Login to Quote

Vitor Martins enjoyed the cool, calm Portuguese evening at a bar overlooking the sea of South
Portugal. A red sunset covered the sky and reflected on the ocean water, which was now stained orange from it.

He sipped at his drink and looked over the sea. Vitor was a shy, humble and quiet person, not one to boast or brag.

This was his third summer away from the game. Well, the playing side of the game. He had spent a seasons as U19’s assistant manager at Pacos Ferreira, where he had spent two seasons as a player.

He then moved to his boyhood and hometown club Electrico for the final three years of his career in the fourth division.

Martins was mainly a centre midfielder or a central defensive midfielder. He didn’t score many goals in his career and he probably didn’t get the plaudits he deserved as well. He was never capped by Portugal.

He finished his drink off and paid, before leaving and walking home via the beach. He grabbed his shoes and walked bare foot in the sand.

He heard his phone go off and he answered it. “Hello.”

“Hello is this Vitor Martins?” asked the man on the other end of the line.

“Hello Vitor, I am Jose Fernando Nabais. I am the chairman of Clube Oriental de Lisboa, and I would like to offer you the job of manager at Oriental,” boomed the man.

Vitor stopped, was this a hoax? A prank? Surely not, he thought. “Ok, sure thing,” he answered.

“Would you like to meet me at the club stadium?” Nabais asked.

“Sure,” Vitor answered, in the shortest way possible.

Nabais continued to give him the address and time of the meeting and they hung up. Martins got home and got ready, in the morning he drove to Lisbon for the meeting.

The meeting ran smoothly, the contract was agreed and Martins began work with immediate effect. He signed a one year deal on £500 a week. Vitor smiled while the press took pictures of him holding the maroon scarf above his head. 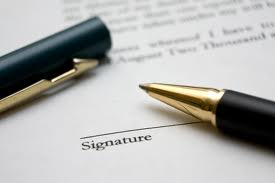 JordTheDesigner
7 years
Good Luck Mate ill be following , there is the B teams in the second league to be counted as your rivals

And of course, hopefully I get promoted so I can verse them.
Login to Quote

Vitor walked slowly up to the front of the run down stadium. Wow, he thought. People were willing to come here to watch football? Obviously so.

He went into his room and put some tracksuit and boots. He walked over to the side of the stadium, near the dugout, and looked at his players all playing a mini-game.

He swallowed. Can’t be shy, he told himself, and called them in. “Everyone,” Vitor said, and motioned for them to come over. Once the last one was over, Vitor started speaking. “I-I just wanted to introduce myself as the new manager of the team, my name is Vitor Martins, but you can just call me Vitor or any nickname you think up,” Vitor said.

A couple of their heads were raised and some smiled. The captain spoke first. “As a team we wish you success in the job and hope you have a long and successful career at Oriental,” he said.

Vitor smiled and so did all the others, a couple of others spoke and then they started training. First it was two five-a-side matches and then they did some fitness.

Vitor then went to his desk and left the training to the coaches. He looked at the piece of paper. The chairman had said they would all accept, but Vitor wasn’t sure.

He called in the coach and the assistant manager and told them about his offer of a mutual termination. Luckily for Vitor, they took it in their stride and left.

Now Vitor had to find replacements, and boy was that hard. He had the shortlist of people with at least some ability. After an hour sitting on the desk I finally agreed to get a coach, called Zeca, who had international experience behind which could come in use.

I also managed to pin down William Andem, a former Cameroonian international who would work with the U19’s. I found a couple of scouts but about 95% of all people I approached didn’t want to discuss contracts, not even unproven ones.

After that was finished I told my new assistant that I wanted him to take control of the friendlies but if they got bad I would take over. This gave me more time to think over transfers and ways to improve the team.
Login to Quote

After figuring out all the tactics and set piece takers I sent out my assistant to Sporting (B) in what may be seen as a local rivalry for the first friendly.

When he reported back saying the team had drew 1-1 I was pleased. This was a team a league above us and that was a good result. I didn’t see any highlights but he told me we had played well. This was good.

The second friendly wasn’t so good, a 1-0 defeat and I thought maybe I should take over for the last friendly just so I can overlook things myself and not let us go into a slide.

The game was against our feeder club, SL Olivais. Weird, I thought, how a third division club can have a feeder club. I sent out the team with all the new signings. We went 1-0 up but in the 80th minute Olivais pegged us back.

I was disappointed as we had lost possesion high up the field. But we kept our cool and after waiting for the right opportunity, Mendonça sent in a cross from the left and new signing Alves scrambled it home with three minutes to go.

A lucky win but a win none the less, with a few areas patched up and we were ready for our Taça Portugal game to start our season up. 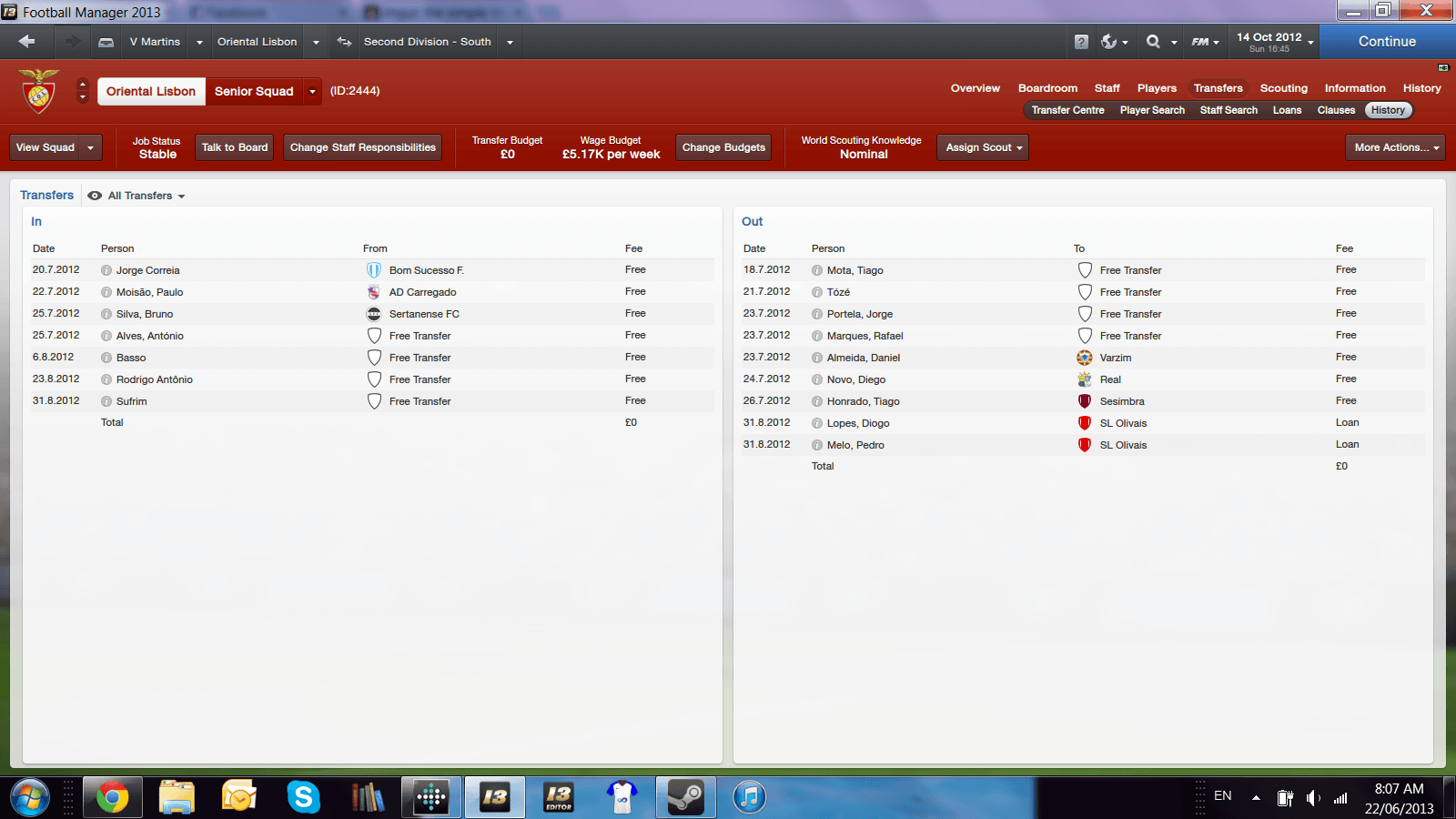 Overall, we strengthened the team in the right areas and preseason was okay but not ideal. We kind of scraped through but the tactic is looking very good and the players have responded well.
Login to Quote

Walter
7 years
NOTE: To all readers of this story, I have been away for three days and will be away for the next week so I will TRY and post but I doubt it because I am on an iPad and it isn't that good for typing in codes and all that.

So, just thought I would let you know, hope you are liking the story so far :)!
Login to Quote

I overlooked the teams training, watching my players play a five-a-side game with small goals. This was a simple drill which promoted ball control and passing. It also gave them a taste of match day experience.

Their first match was coming soon, so they needed this lesson. It would make them better in tight situations. After 5 more minutes of this Zeca, one of the coaches I had managed to sign up, told them now to play half pitch.

I looked over the nets, which were pretty poor. I grabbed my phone and called one of the local sports shops in the eastern side of Lisbon. I order two new nets, poles and tight string to hold them in a rectangular shape.

I went down the stands and called the boys in for a team meeting. Most of my nervous ans shy attitude had gone. I spoke to the players about our certain expectations for the season. We, the coaching staff, thought that a title challenge is suitable, and that we didn't see why we could go far this season.

Before long the game approached and I made my way to the shabby changing rooms in the UD Lieria stadium. All the players gathered and I gave them the instructions for the match. We lined up with the 4-4-1-1, a more direct formation.

The players walked out and I made my way to the dugout and sat down. The referee kicked off the game and Leiria kicked off. I remained seated while Farense's manager walked around and instructed his players. Occasionally I got up but just to reiterate the instructions already made.

It was a real kick in the teeth when Leiria nearly opened the scoring on the verge of half time. My assistant went up and encouraged the players. But half time went and I went back into the rooms.

Calmly I told the players to stay on track, keep going. The second half we gained more territory and possession and created opportunities but couldn't take the lead. The final whistle went and the final score 0-0, a good result against favourites for the title and good start to my managerial career all together.
Login to Quote

Antonio has been absolutely brilliant this season you'll see in the updates to come! Thanks for reading and commenting
Login to Quote 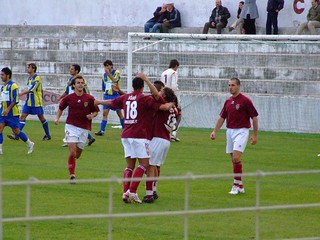 A solid opening month for Oriental Lisbon under Vitor Martins

All in all a solid month for our side. We picked up good valuable points at UD Lieria and SC Farense, who are title contenders. The cup loss to CFO Beleneses I am not worrying about. They are division above us so that result is pretty good. We finished the month on a high note with 6 goals scored and none conceded in two matches against Dezembro Sintra and Quarteirense. Overall, a good start that we can build on. Rodrigo Antônio was our best player this month, although originally a striker, I have played him in attacking mid behind Antônio Alves as an Inside Forward and it has worked wonders.

***The table is AFTER the game against CF Benfica, in October***
Login to Quote

You are reading "Oriental Lisbon ~ One Step Closer".