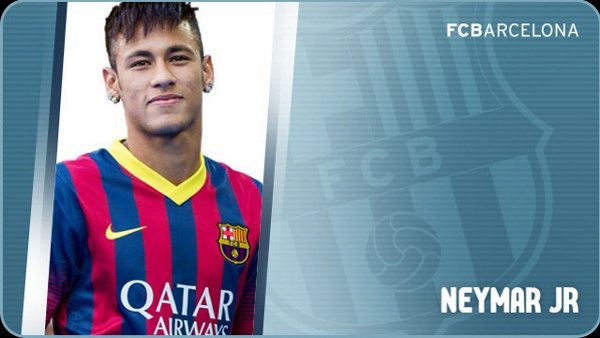 New Barcelona manager has told the press today that new signing Neymar da Silva Santos Junior, mainly known as Neymar, will be a key figure in this seasons team. The 21 year old has just signed at the Nou Camp for £48.6m making him the ninth most expensive transfer in the world. Neymar has been set a release clause of 190million euros. Despite Neymar recently saying in the Daily Mail that he is Messi's under study, Gerardo Martino has said both players will be key to any Barcelona success this season and will need them both to be in form if Barcelona are to win the Champions League. 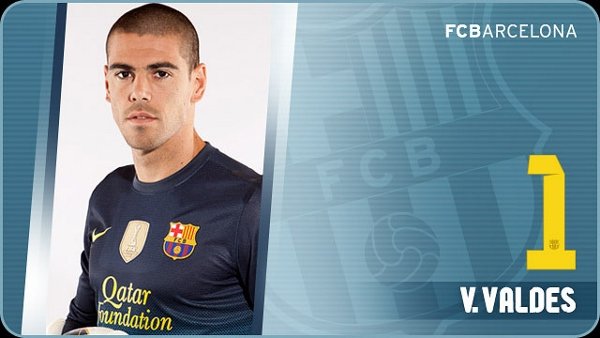 Gerardo Martino has also warned current number 1 Victor Valdes not to get comfortable with his number 1 shirt as he and Pinto will be chosen upon recent form and training levels. Also Ter Stegen has been linked with a move to Spain which could see either Valdes or Pinto sold.
Login to Quote

AlexTHFC
8 years
2 players who should be vital for you. Nice update

Jer
8 years
Are you getting a new centre back for FCB?
Login to Quote


All will come apparent soon! Probably.
Login to Quote

Chris
8 years
Quality writing, really descriptive and a really nice start to a story. Can't wait to see how you do!

Radders2109
8 years
Great start JS,loving the graphics will be following!
Login to Quote 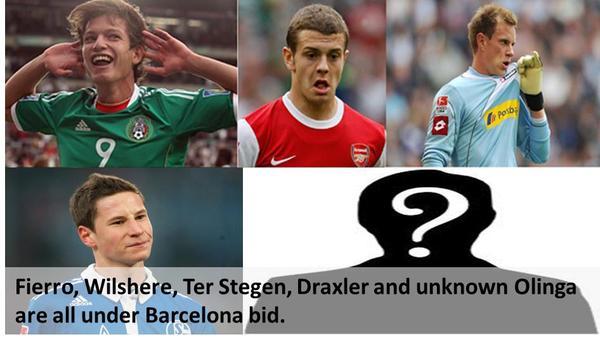 Gerardo Martino has told the press that he is interested in buying 5 talented youngsters that would sum up to be around £80m. He told the media on the 18th July 2012 that Carlos Fierro, 17, from Chivas, is a very talented young striker and he would be very interested in bringing him to the Nou Camp. Reports suggest that Barcelona are willing to pay up to £3m for the striker.
The next player under speculation is Arsenal's Jack Wilshere who has impressed in his short Arsenal career after returning from injury. The 20 year old could cost Martino £30m.
Young goalkeeper Ter Stegen is also under transfer rumours as earlier reported, Martino is looking to sell current keeper Valdes to bring in money for the youngster who could cost up to £20m.
Martino has also expressed interest in attacking midfielder Julian Drexler, currently at Schalke, the promising player could cost the club £24m.
The last shock player under transfer bid from Barcelona is Malaga's young striker, Fabrice Olinga. At the tender age of 16 the striker is showing promise according to Barcelona scouts and will be a world class player in the future. The 16 year old could prove costly with Martino setting a limit of £5m to spend on the striker.

When asked about how Barcelona are going to fund the signings, Martino responded with "well it will be hard as this is a lot of money, however we have put 11 players up for sale recently and will look to coup the money spent to fund these deals." The reporter replied by asking if Gerardo could tell the world who these players are, " Yes, players such as Valdes, Adriano, Bojan, Afellay, Bartra and Montoya are all on the transfer list and will be sold before August." Looking for more detail the reporter then asked if the youngsters brought in are lacking too much experience for a big club like Barcelona, "Absolutely not. All of our top players such as Messi, Xavi and Iniesta all started young and now they are the best players in the world. Now its time for me to go."
Login to Quote

It is harsh, but with the incoming players I need the money and their rating really isnt too good for Barca.
Login to Quote

A busy start for Barcelona in the Summer transfer window as 5 players have exchanged both in and out of the Nou Camp, exchanging over £60m between the clubs.
The 24th of August seen 20 year old goalkeeper Marc ter Stegen join from Gladbach. The German youngster was signed for £15m, a extraordinary fee for a player at such a tender age. Stegen will be on £89k per week, £41k per week after tax until 2016. He was previously at Gladbach for his full career since 2006.
The day after brought in another expensive transfer of Jack Wilshere from Arsenal. At £29.5m the signing was a big one however many pundits in the English media are predicting it is a great coup for Martino as Jack will have a bright future at the Nou Camp. Wilshere will be on £130k, £61k per week after tax until 2017.
On the other hand, three players have left Barcelona to help fund the deals. Jonathan Dos Santos left for Real Betis for £2.5m as Martino didn't see a future for the player at the club. 27 year old Adriano has made way for the youngsters at the Nou Camp, for a £12m fee. The last player to leave was Martin Montoya for Werder Bremen for £5.5m.
Login to Quote

Jer
8 years
Some good signings, but I feel that the Wilshere was unnecessary, as Spain develop better midfielders than England. if I were to be managing FCB, I'd have a full Spanish team! Update more often, as I like this story tons!
Login to Quote

2013-08-02 19:42#124830 Pauker : Some good signings, but I feel that the Wilshere was unnecessary, as Spain develop better midfielders than England. if I were to be managing FCB, I'd have a full Spanish team! Update more often, as I like this story tons!

I've been at the Ashes so couldn't update, I see where your coming from and thats what I'll be doing in future, the update coming soon will most likely be the last BIG signings I make, the rest will be small youth regens ect.
Login to Quote

http://topnews.in/sports/files/Stephan_El_Shaarawy-1.jpg
Martino and Barcelona have hit August with a bang by announcing a further 5 transfers.
Stephan El Shaarawy from AC Milan has been bought for a staggering £32m. 19 year old Stephan was chose over recently linked Draxler as he was a natural right winger wheras Draxler was less comfortable with the role. El Shaarawy's wages were low compared to the fee at £48.5k per week, £22.5k per week after tax until 2017.
The other 4 transfers brought into FC Barcelona were managed by the clubs football director who is in charge of bring youth players into the squad. The first to be completed was Carlos Fierro from Chivas for £4.1m. Fierro is a highly rated striker. Another highly rated striker was brought in days later for more local Malaga, in Fabrice Olinga for a fee of £5.25m. Next was left winger Julian Brandt from Wolfsburg for a lower fee of £625k. Last to be completed was the young attacking midfielder Maximilian Meyer from Schalke for £1.8m. All four of these young stars are highly rated among coaches and pundits arouund the world and are touted to become world stars at the Nou Camp.
http://arxiu.fcbarcelona.cat/web/thumbnails/199_150/Imatges/2009-2010/futbol/primer_equip/plantilla/2009-07-20_CARA_PEDRO_01.jpg
Players didn't only arrive at Barcelona but left too. Roberto, Patric, Roman and Edgar all left on loan deals. Bartra left Spain for Arsenal for a fee of £4.5m to play under Arsene Wenger. The biggest deal out of the club was youth product Pedro who also left for London to Chelsea for £22m. A staggering amount which helped pay for the transfers. A few staff have been imported and exported also.

You are reading "FCB - Martino Era".