Meeting with Steve and Arséne 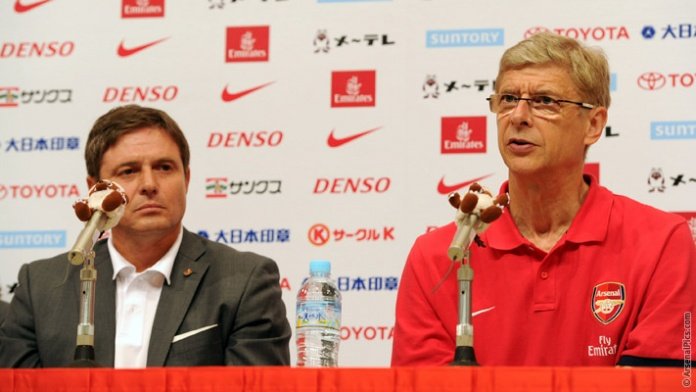 What a dream come true this is, honestly. Working with Arséne while I was playing at Nagoya was amazing. He is the best manager I have ever played with. Being able to work with him now I'm a manager and he is the club's director of football is simply out of this world, I couldn't have asked for anything better.

To be honest, in my mind I had always planned it that if I was to ever work with him, I would only be his assistant or coach, but now I'm the manager of one of the most popular teams in the world and the most popular team in London, Arsenal Football Club. I couldn't have asked for anything more.

If it wasn't for me meeting Arséne years ago, I wouldn't have this job. He was there alongside with Steve Bould to pick me from the airport, which I appreciated a lot as it was very early in the morning when I arrived at Heathrow Airport.

Now as manager of this football club, there are certain things the manager, assistant manager and director of football need to discuss and that's what I'm about to do with Steve and Arséne in my office.

*knock on the door*

Its Arséne! I hope I am not disturbing you?

No not at all, I've been needing to talk to you, the transfer market is still open and we need to strengthen a bit more. Let us just wait for Steve to ge...

*knock on the door*

Sorry I'm late lads, just had to finish clearing the training pitch, what did I miss?

I was telling Arséne that we still need to strengthen the squad, do you agree Steve?

Yes I do agree, despite us having the second best defence in the league last year, I think we need another defender, especially with Thomas out injured.

Is there anyone you have in mind Dragan, or do you want me to handle it and go and make an offer for a defender?

Christian Benteke would be a good signing, he is young and a very good striker!

I agree with Steve, also Oscar Cardozo would be a decent signing, he is a clinical finisher and would be good back up. Olivier should be the main guy and I believe since we are trying to bring in a striker of quality, Yaya should go out on loan, I will handle that.

Thank you Arséne. We have been offered Honda and Cabaye, do we really need them. I'm surprised we're being offered Cabaye, yet when you were still manager they were being stubborn.

I think for now we should focus on bringing in a striker and defender. If we can ship one or two players off then we can go for another midfielder. Nicklas has to go, he is not needed.

AS Monaco have shown interest in him, I will try and negotiate a good deal from that.

Brilliant, you really seem to be relishing your new position! Thank you guys I think that's all for today.

Thanks Mo!
Login to Quote

Sky sources have confirmed that Arsenal have had a 15.5 million bid for Aston Villa Striker Christian Benteke accepted, however the Belgium striker has refused to talk to Arsenal over a possible move to London.

We understand that Arsenal's director of football, Arséne Wenger contacted Aston Villa and made a bid close to around 15.5 million, immediately it was accepted but the player refused to talk to Arsenal. Benteke recently signed a new contract and we believe that is the reason why he has turned down what would be a dream move to Arsenal, as he himself is a massive Arsenal supporter.

Even before Arséne Wenger resigned as manager, Arsenal had been looking for a new striker. Gonzalo Higuain almost signed for them, but Real Madrid decided to increase their asking price and Napoli were prepared to pay it and Higuain ended up as a Napoli player. Arsenal also made a comical bid of 40,000,001 for Luis Suarez as it appeared that the Uruguayan had a release clause in his contract if Liverpool failed to qualify for the champions league. Wenger also refused to turn down a move for England and Manchester United striker, Wayne Rooney.

Reports also suggest that Arsenal made a loan bid for Demba Ba, however Jose Mourinho smartly rejected knowing Ozil was joining Arsenal. Mourinho said the following about the signing of Ozil:

‘There is no copy of him – not even a bad one. He is the best number 10 in the world. He makes things very easy for me and for his team-mates with his football vision and the decisions he makes.

‘Everyone loves him and sees a bit of Luis Figo and Zinedine Zidane in him.


‘We didn’t accept Arsenal’s offer for Demba Ba because the signing of Ozil makes them title contenders.’

It seems like this will continue to be a highly frustrating window for Arsenal as they continue their search for a striker.
Login to Quote 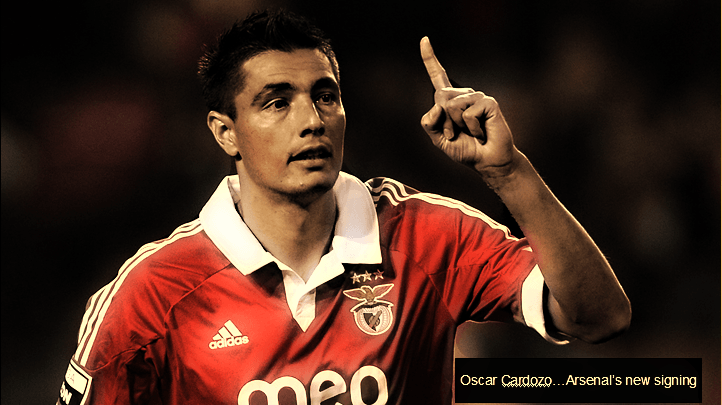 
Oscar Cardozo has joined Arsenal on a four year deal.

Cardozo, 29, joins Arsenal from Benfica where he made a total of 135 appearances in five years.
During his time at the club he won the Portuguese Premier League once and the Portuguese League cup three times.

The striker has been been a target for former Arsenal manager and director of football, Arséne Wenger who himself said: " Oscar is a very good player with incredible talent. He is very underrated which is not very good but hopefully during his time at Arsenal he will show everyone the quality he possesses."

"While I was a manager, I had said we were working very hard to try and bring in top quality player to the club, players that will actually add something. It is not only me involved in transfers, its the whole club, we have all worked hard to get this transfer done and we can be proud."

Meanwhile, Dragan himself had some words about the signing of Cardozo, he said:

"This is a brilliant signing for the team, Oscar is a fantastic footballer and
a great striker, we are very lucky to have him at the club. We welcome him here.
I believe that he will score goals and will have a good relationship with all
the other players in the team. We hope has a successful time here at Arsenal."

Arsenal chief executive, Ivan Gazidis said: "This is yet again, another exciting day
for the club. We have once again have attracted and signed a world class in my opinion to
the club. Credit must got to Dragan and Arséne who worked extremely hard to get this
deal done. We welcome Oscar to the club and we look forward to seeing him play here."

"Mr Kroenke, our controlling owner, has always fully supported Arsène, now Dragan and the Club in making significant investments to strengthen our squad and to bring in talented players who fit our style and ambitions. Despite what people have thought, he wants the best for the club."

Back in 2003, Cardozo joined his hometown side 3 de Febrero CE but had an unsuccessful time there. One year later he joined another team in his home nation, Nacional, where he made a total of 63 appearances and scored 29 goals over two years. In July 2006 he joined Club Atletico Newell's Old Boys. Here he made a total of 33 appearances scoring 21 goals. After some impressive displays he was signed by Benfica for 5.5 million where has impressed in Europe.

Speaking after completing his medical at London Colney Cardozo said:

"I am very happy, a day I will never forget. This is a big step up but I know I can do well here at Arsenal. It is a dream come true to sign for Arsenal and I will not them down."

Everyone at Arsenal welcomes Oscar Cardozo to the club. The deal is subject to the completion of regulatory processes. His number will be announced via @Arsenal on Twitter shortly.
Login to Quote

Thanks, I'm glad to have signed him 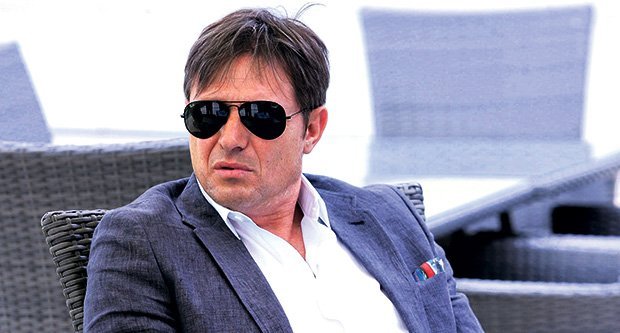 We've had a very good pre-season and now I believe I have gotten use to all my players. I have an idea of who is in my plans and who will be leaving the club. I can confirm that Nicklas Bendtner and Park Chu Young have both departed the club to AS Monaco and A.C. Milan. We wish them all the best and thank them for their services at the club.

We have strengthened are attack further, that is excluding the deal for Mesut Ozil. Now its just time to find a defender that actually fits into our philosophy. Our scouts, Arséne and myself have been working very hard to try and get a deal done. We have contacted various clubs and have made some enquiries.

The spirits in the camp are high. The fact that Arséne is still part of the club, in a new role not only to him but to Arsenal is good for the players. For many players, without Arséne they wouldn't be as good as they are today. In my life I owe four people. My mother, my father, GOD and Arséne, he is truly my mentor and someone I look up to and I try my best to copy his philosophy.

In terms of tactics, not much will change. I've only made a few changes. Firstly, Steve and I have discussed and we believe that our defenders have the quality to mark and individual, therefore we will no longer be using zonal marking, rather man marking. Secondly, instead of sitting back and allowing our opposition to pass the ball, we will press and try and win the ball, which could allow us to counter attack. This is a risky move but we have to take risks.

We kick off the season vs Cardiff City away. I have been following premier league football for a while and last season they looked very dangerous in the championship. Surprisingly, the have spent quite a lot and have strengthened. We must underestimate them or else they will punish us badly.

We will put out a squad that will go and make us proud. Flamini and Ozil will play and make their debuts. I believe both are very important members of the squad, especially Flamini. You see with Ozil, he is a world class player but we also have quality players who play in his position, whereas Flamini is our only natural defensive midfielder. I'm hoping he understands that the game of football has changed a lot from when he last played in England 5 years ago. He must time his tackles or else he will find him self in the shower wondering what he did wrong.

I can't wait for the start of the new season. I have faith in squad and I believe we will get a good result vs Cardiff.