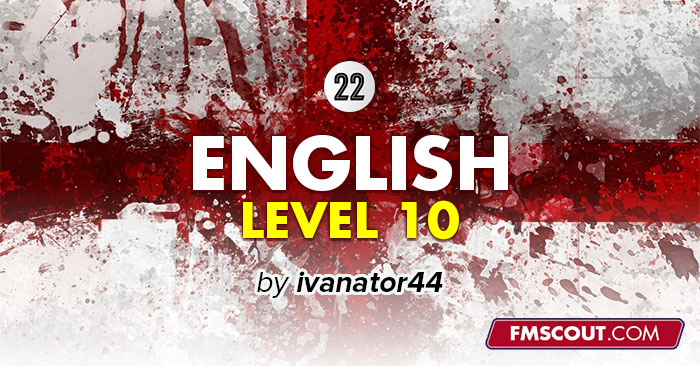 Taking FM22 down to level 10 of the English Football Pyramid.


This Database takes up many hours of my spare time, If you would like to send a donation my PayPal link is.
Donate via PayPal

FA Trophy redone to include preliminary rounds, proper prize money to be added.

FA Trophy & FA Vase Finals played on the same day but at different times like in real life.

Small amount of prize money added for the top 3 teams at Levels 7-10.

League Cups added down to Level 10.

All promotion/relegation down to Level 10.

Boundaries added for all leagues down to Level 10.

Full long names added for teams down to level 10.

Maximum wage per week added in at Level 7-10.

Some teams not able to get relegated/promoted at Level 9-10 if their reserve/B team is in the Level below .

Small amount of prize money to be added to Cups from Level 7-10.

Awards down to Level 10.

Vanarama National League returns to 24 teams after the 1st season.

Regional Premier Divisions 22 teams in all divisions after 1st season.

Regional 1st Divisions 22 teams in all divisions after 1st season.

County Leagues 20 teams in all divisions after 1st season.

How to unlock the English Lower Leagues on FM22

2) Drag the file into your "Editor Data" folder. located at \Documents\Sports Interactive\Football Manager 2022\editor data. If this folder doesn't exist, create it.

3) Open Football Manager 2022 and start a new career, In the top right of the screen, under "Database", make sure "English Level 10 & Data Updates" is selected.

5) Once the database has loaded, click "Add/Remove League", then tick "England". The league will then be playable.

Recommended Settings
- It is highly recommended to tick "Add Players to Playable Teams" under advanced options, as well as unticking "Do Not Add Key Staff". This will ensure the database is populated with players and staff at all teams.

- Playing with an advanced database is also recommended. To do this, on the league select screen, click the "Database" option in the top-right, under Approximate Player Count, then click "Advanced". Under "Nations", click the "Add" dropdown, select Europe and tick England. Tick all boxes that appear, the click OK.