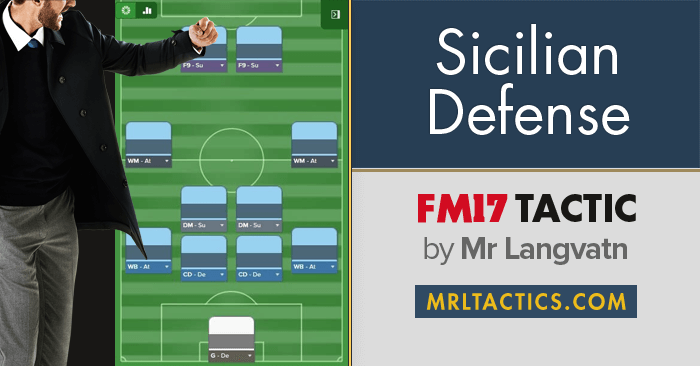 This is an awesome tactic tested on multiple teams. The author of this tactic is mr. Langvatn, he gets all the credits for making our lives easier. The tactic is adapted from FM16, missing just a feature. The strikers can’t be set up to Press More anymore.

The FM16 version of this tactic was created by Mr Langvatn, not me. I just received his kind permission to post it here & now I simply recreated the tactic for FM17. Make sure to check out his new website.


I, together with MJK46 and Balik, have tested it on multiple teams, but for serious reasons (MJ is lazy, and Balik is good friends with lady laziness), for now we only have screenshots from two teams, Barcelona and Hull. Rest assured that in the near future more tactics will come.


The tactic is extremely versatile when it comes to changing player roles. This means that if you have a great player who doesn't fit any of the roles in the tactic, you can simply change the role to something that suits him best. In most cases, this will work out very well. 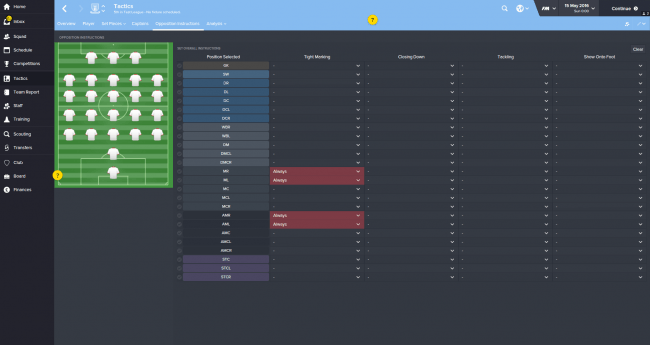 With this team most of the tactics deliver some kind of results. Mr. L. tactic delivers results and gives your heart a well deserved rest too. You won’t have palpitations, you won’t risk a heart attack, and most of the games you will be sure that you are the winner.

Titles won
I basically won everything with Barcelona, which is not something very impressive, since you have Messi, Neymar and Suarez, but I did it in style, with no sweat. Check my win percentage and the goals for. I almost did a 3 goals per game season.

Champions Cup Final
We won it against Arsenal with a 3-2 result, but we just dominated them in terms of clear chances, shots on goal, at goal, possession, everything. They scored because we like pretty football. Also, Luis Suarez and Lionel Messi finished as top goalscorers of the competition, while also dominating the Assists and Player of the Match awards. 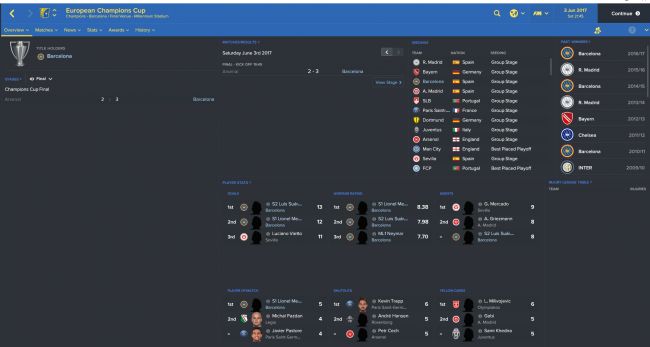 Spanish League
The league was a one way business. The only defeats we had were while testing another tactic. Messi was the top scorer, but you can check the stats yourself in the image below. 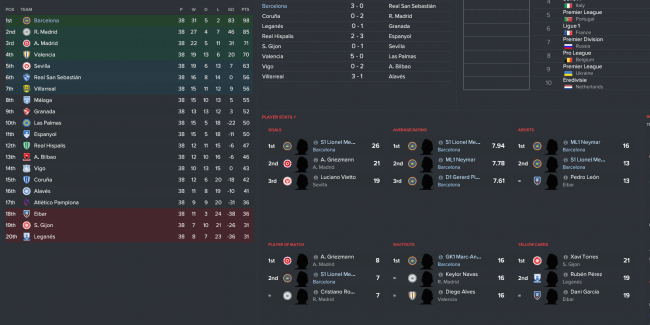 Player titles
Well, Messi, Neymar and Suarez just took everything. I even got some achievement for having the first, second and third players for the world prizes from my team. Ronaldo, please do not cry, next year you might have a chance...

The basics still apply to the tactic, as to any other tactic. If you start the game with players with 76% condition against a fully rested Manchester City you will most probably loose, and in the process also get a few injured players. So be sure you always keep your players fit, and with a match sharpness over 95%. This is needed for ALL TACTICS. Arrange friendlies for players that don’t get enough playing time, or make them play for second or third team.

Transfers
I only had 3 transfers, because I needed Defensive Midfielders due to the nature of the tactic. I sold Arda Turan for 30 millions to Tottenham, and I bought Thiago Maia and Riechedly Bazoer for 25.5 millions. 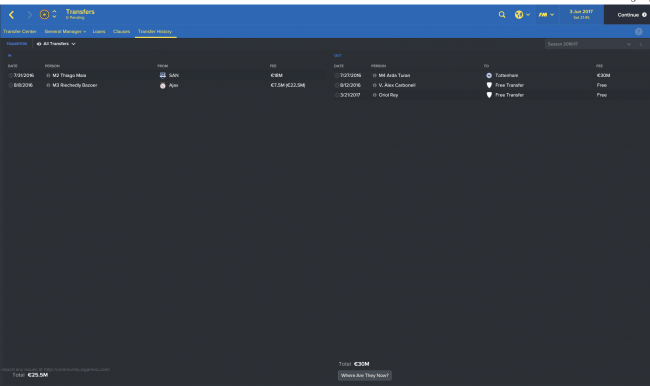 Team and positioning
The screenshot is self explaining, you will see what players I used for every position, their ratings at the end of the season, how many goals they scored, etc, etc. Munir is in the team because he had a 6 months injury at Valencia and I decided to call him back so the club doctors can treat him.

A sample of general results
Here is a list of some of the results we had over the season. Bear in mind that in most of the draws we dominated in terms of everything, by far. And many of the games were won with the second line of players, as you can see in the Team and Positioning section, I do rotate players a lot. I do not care that it is Messi, Neymar or whatever. I do not like injuries and I want fit players to win me titles. I just take care that the really tough games have the first line of players prepared. But I will sacrifice a result in the league if I have to win a match in the Champions League and I want to have the players fresh. 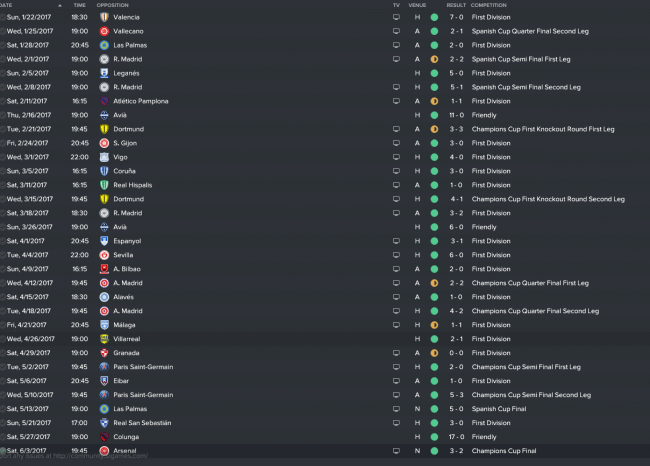 Hull test - half a season

This one is a quicker test. I only did it for half a season, and the only purpose of it is to convince the doutbers that it works on small teams too, because I already know the tactic is rock solid. Hull starts the game with 8-10 injured players, and some of those injuries are long term injuries.
On top of that the other good goalkeeper is suspended for the first games. So beside that you are a small team, you have to play midfielders in defense, play the best Goalkeeper you have available, so on.

One thing you should take into account. Due to the injury problems I decided from point one to never use first eleven players in the cups. Therefore I lost my first cup game against a 18th place Wigan from the Champ 6-0 or something like that.

Position achieved
After 19 games, we did the impossible. 4th spot, with the second best attack in the league, and an awful defense. You can safely ignore that defense, most of the goals were scored in a few big score games against the top teams. Given what kind of players we have and who we play against, it is absolutely normal. The only good away results we managed to sneak with a big team was against Manchester United, 0-0. At home we kick their arses, but away, when you miss players and you are still learning the tactics, it is kind of hard. 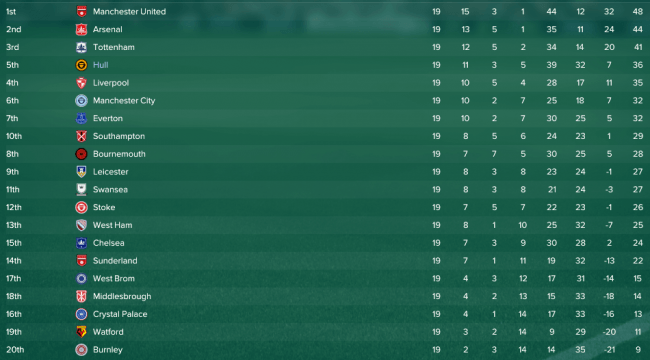 Player titles
Probably nobody expects to win the World Player of the Year, or the Premier League top goal scorer award with a Hull player. I did not expect that either, and my expectations were fully met.

Check the Warning section from the Barcelona test. The same things apply.

Transfers
I am not sure what kind of expectations you have for this sections, but you might be in for a big surprise. Because this was a test run and I wanted to see how good the tactic is when you meet way bigger teams than you as Hull does on a regular basis, I DISABLED TRANSFERS. That is right. We had 8-10 injured players, one suspended goalkeeper, and no transfers or loans made to cover them. 4th place in the premiership with a war ravaged team, playing whoever you had available. 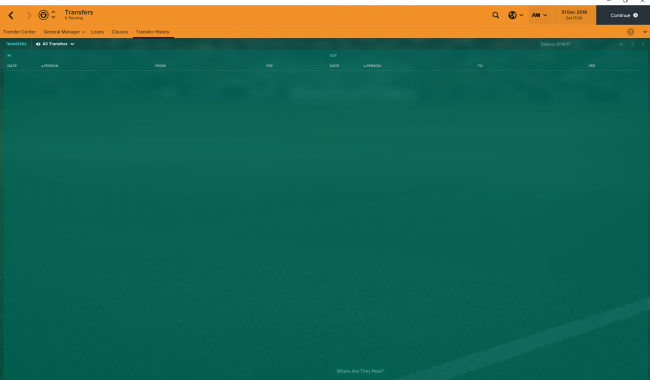 Team and positioning
Here is the list of players used in the test. The list has the same settings as the Barcelona save has, so you can easily see each player what position they played and for how many games and with what results. Abel Hernandez would have been the top goal scorer of the league half way in if not for a transfer bid from some Chinese team that made him angry and perform less in the last games.

A sample of general results
As you can notice in the picture, I had a lot of midweek friendlies. The reason is pretty simple. Because usually the team plays once a week since we had no cups or Europa games, I had to keep my second line of players Match Sharpness high, so I organized friendlies for them each week. NOT FOR THE FIRST ELEVEN PLAYERS OR PLAYERS WITH A MATCH SHARPNESS OVER 95%!!!

As I already told you, we have a problem against big teams away, but it can be easily fixed with a few loans or cheap transfers. The main issue is the pace and acceleration of the back line, the central defenders especially. The pace and acceleration for the best 2 central defenders is 9-10 and 11-11. Now when you play against attacking players with 17 18 19 pace and acceleration it is hard to perform stellar each and every game, no matter if you position the central defenders deep or up high on the field. They will still get caught because when you are slow as a fat pig and your defensive skills are also average, that’s the way things work. The 4th spot is still a huge overachievement, with the right loans at the start of the season you could even challenge for the title. 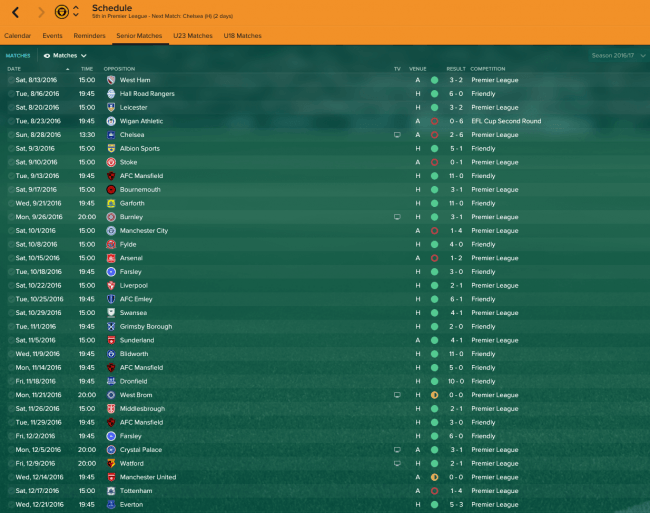