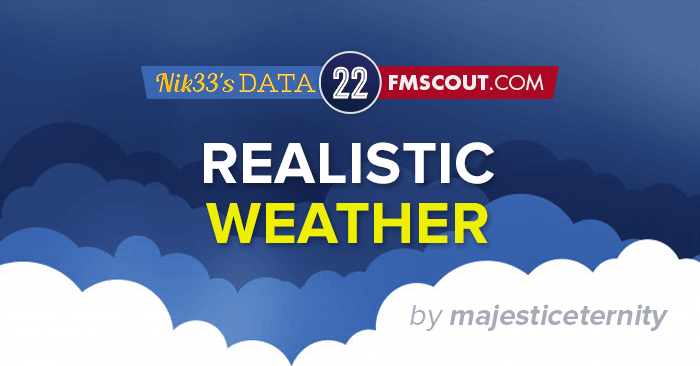 This is the continuation of the FM21 Realistic Weather pack by majesticeternity. Full credit to her!


Can you battle the down-pour from Kyushu, Japan's typhoon season, the below -20 temps in Russia, the sweltering heat of Mexico, or the hot summers and monsoons in Senegal? Or do you prefer the mild, sunny Mediterranean side of Spain?

Australia (13 distinct climates varying in all weather types, but in general, increased temperatures, added wind, and a bit more rain/typhoons in proper places)

Mexico (optimized to a wider range of temps, added Baja and Baja Desert, and more extreme heat in hottest areas)

If you like this creation, and wish to support the hours of work, you can donate below:
Donate to majesticeternity via PayPal

How to get more realistic weather in FM22

Start a new save.

When selecting the database (before Advanced Setup), be sure to select the checkbox to enable this file.