Search
FM Scout is the only community you can talk Football Manager in real time. Here are 10 reasons to join!
Home › Scouting › FM 2017 Best Players ↓ 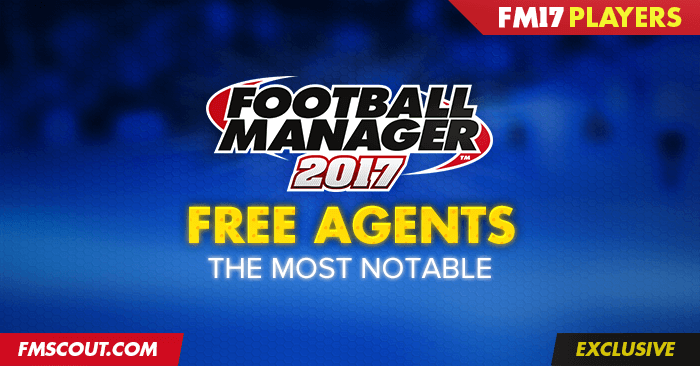 This is my guide to finding and assessing the best Football Manager 2017 free agents. It applies to top leagues by default, which means that the players you see below will likely have no interest in joining a lower league side. I will work on another list for lower leagues when time allows, so keep checking the site for that in the coming weeks.

This list includes some of the most notable free agents in Football Manager 2017 who would be willing to join a team from the top divisions; mainly top flight sides or second division ones in certain nations, such as English Championship. So essentially these are the best FM 2017 players available on a free transfer at the beginning of the first season (July 1st, 2016).

This is the successor of my ultimate list of Football Manager 2016 best free agents. I will be revising this list often as I gather more data from my test saves and of course based on your feedback in the comments down below.

I loaded all players (320k+) in-game to produce this list of FM17 free players. Your savegame probably has less players loaded.

In recent years I would not share a downloadable shortlist because people would steal them and post on other sites without my consent. However, I'm planning to release a few shortlists this year with my favorite players. Stay tuned for that!