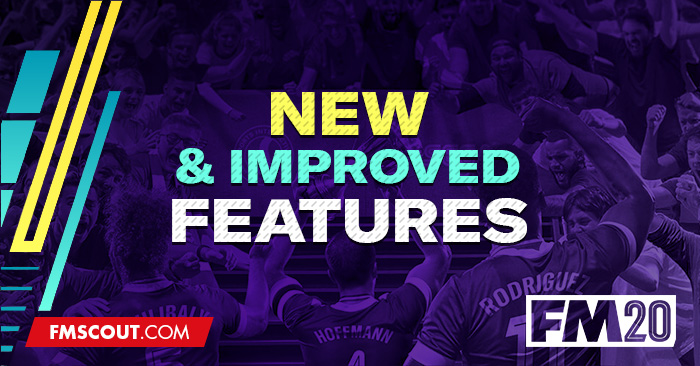 Through a series of blogs and social posts, Sports Interactive revealed the new headline features that will make it onto Football Manager 2020.

More information will be dropping in the next few weeks leading to the pre-release Beta access in late October-early November.

This pre-release Beta access is one of the special rewards for pre-purchasing FM 2020 from selected retailers.

FM20 elevates you to the very heart of the beautiful game. New features and advanced game mechanics allow you to control your players and team’s destiny in fresh and authentic ways, meaning the story and legacy you create is completely unique to you.

The overhaul to board mechanics in FM20 is the most wide-ranging in the history of the series. Lots of aspects have been completely overhauled or revamped to make them more engaging and to contain more graphical information. Introducing Club Vision, which will have a far-reaching impact that goes far beyond the boardroom.

Club culture objectives can include set targets around the club’s transfer policy as well as the style of football the board expects you to play.

Five year plan objectives are split season-by-season. These objectives might include a mixture of financial, infrastructure and competition objectives across five years to achieve the board’s ultimate vision.

Ongoing objectives are tasks that you will be expected to stick to during your tenure as manager. These objectives are engrained into the identity of the club.

Your Club Vision will first be presented to you in the new welcome meeting, another major element of a wider overhaul to the boardroom experience in FM20.

Club Vision represents a new way to get the most out of long-term saves.

You can find more details about Club Vision on the official website. The Development Centre is an all-encompassing hub, providing you with all the tools and information you need in one place, giving you the best chance of reaping the rewards of developing players.

It’s not just the players that are currently at your club that you can track in the Development Centre, it’s now easier to track players in and out on loan too with access to their performances and ratings in this hub.

You can see who’s taking their chance for first-team football well, and who is struggling for minutes and may need recalling.

The Development Centre will also offer a preview of your yearly youth intake. Not only will you see an indication of how strong that year’s intake will be including whether there are going to be any high potential players coming through but also any positions that are going to be well covered by the intake.

It also incorporates the management options for your youth and reserve squads. It allows you to fully immerse yourself in your team’s youth development or, if you’d prefer, to take a completely hands-off approach and delegate everything to your backroom team.

You can find more details about Development Centre on the official website. In FM20, when negotiating a player’s contract, you can fine tune their pathway through changes to their contract. You can alter their Playing Time with twelve descriptive statuses which indicate how much game-time you’re offering per season across their contract.

This gives way more definition to a player’s standing within the club. From day one of them arriving, either from another club or the academy, you both know where you stand, through this mutual agreement/promise.

This will help to not only develop a pathway for one player but to map out your entire squad looking forward. Setting playing time pathways is not only useful in the management of your current players but in attracting targets too.

The Playing Time Pathway will also impact players you send out on loan. You and the potential loan club will be able to negotiate in more detail just how they plan to use your youngster with a defined level of Playing Time.

The new Playing Time Pathway gives you more control over your team structure and gives you an easy way of keeping on top of your long-term squad planning while also giving you more ways to keep on top of your overall squad happiness.

You can find more details about Playing Time Pathway on the official website. As part of your pre-match news flow, you’ll receive an inbox message informing you of your backroom team’s advice on who you should pick in your matchday squad. Team selection advice is also available to you at any time on the tactics screen.

Introducing the Technical Director, a role with the ability to offer backroom advice from the very top judging staff ability and staff potential.

Introducing the Head of Player Development, who recommends the players they think would benefit from a loan spell and where he believes they should go while providing loan reports to easily track those players’ progress.

The backroom team in FM20 can be bigger and more helpful to you than ever before. From giving you more detailed and contextually relevant advice to providing expertise in more areas of the game than was previously possible.

You can find more details about Backroom Staff on the official website. The human models represent a significant upgrade from FM19. The base model is reworked to make it more lifelike with more depth than in previous years. The model now has a more realistic anatomy and bone structure which results in a more lifelike appearance.

The kit textures have been overhauled. You'll notice more realistic clothing that drape more naturally over the model and features creases and folds and to ensure that they move more naturally with the player. This extends to the manager avatar which also has more detailed attire.

The pitches have been enhanced compared to the previous examples in FM19. Pitches are now affected by the weather in an obvious manner. Also added water and mud particles flying off from the surface of the pitch which will lead to visible deterioration of the pitch over the course of a match.

The lighting has been improved as well due to the introduction of image-based lighting. This improves the level of shading and exterior lighting during the match, allowing everything to be lit more naturally.

You can find more details about Graphic Enhancements on the official website.

One of the most noticeable changes that you’ll see during matches in FM20 is attacking movement. Players will now make more intelligent and realistic off-the-ball runs during attacking phases and these are contextualised to their position and selected player roles.

The defensive positioning mechanics have been overhauled as well. The entirety of the marking code has been rewritten. Defenders are able to make more intelligent decisions now in order to track the more advanced attacking runs players are capable of making.

There is a range of new animations and AI enhancements that make goalkeepers look and act better than ever before; also tweaked goalkeeper positioning and distribution.

Player traits have been reworked this year so that they work in a more realistic way than before.

The level of text-only highlights has been increased to provide more context to the flow of the match which will help you make more informed in-match decisions. That led to introducing a new match setting that allows you to control the game speed during these text-only highlights.

You can find more details about Match Engine Improvements on the official website.

Scouting is now even more powerful, convenient and useful, giving you the edge in one of the most competitive parts of the footballing world.

You’ll be given more useful information in a better layout with FM20’s enhanced scout reports, as each report easier to analyse and make every decision quicker.

Scouting reminders are new to FM20; another way in which your staff can assist you through your news items. You’ll get reminders through your inbox to alert you just when you should think about sending the scouts back out to look up an old name.

When a scout leaves the club their tasks are reassigned to the scouting pool, so the transition is as smooth as possible, allowing the rest of the team to pick up on their previous work.

You now have more access to existing scout reports when you join a new club. This ensures you’re able to focus your scouts on areas you feel haven’t yet been covered.

It's now possible to add multiple focuses to scouting assignments with extended duration to better hone in on the player pool they wish to explore. Also improved customisation options to zero in on the precise information you like to see from your Scouts and Analysts.

You can find more details about Scouting Enhancements on the official website.

Unveiled through small feature drops on the official social channels.

Buy FM20 through fmscout.com much cheaper than Steam store, and earn a unique buyer badge for your member account, and our gratitude for supporting our community financially.