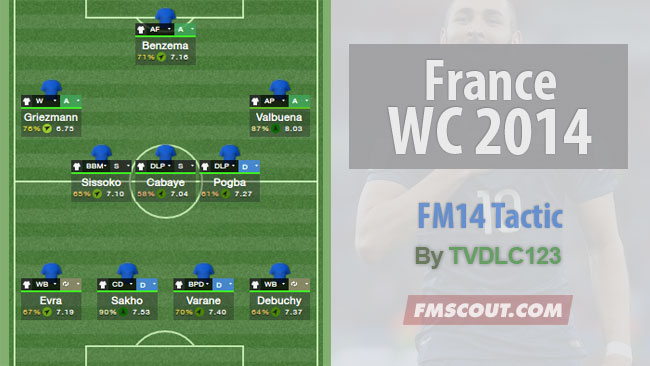 While France may have had a nervy qualifying campaign, manager Didier Deschamps has changed up his tactics for the tournament, and so far, it looks to be very effective. After a comfortable win against Honduras, and with many other of the big teams struggling, France look to be the real dark horse’s in this competition, and even without star winger Franck Ribery, look to have a very strong side. This tactic is based on Deschamps’ revamped style of play with France implemented into FM, to create an extremely deadly tactic with many sides.

The tactic itself, like in real life, is based heavily on the wingers in the team. The right wing especially, will act as your main attacking playmaker, and most of your play will revolve around him. Your left wide man will act as an out and out winger, and he should be relied upon to act on his own at times, as he will be one of the only men attacking at times. Your central midfield three will need to be defensively solid, and all of them will need to have good passing and distribution skills. The furthest right of the three will be the most defensive, winning the ball, before initiating the attack. The left centre mid will need to have good stamina and pace to get up and down the pitch as a box to box midfielder, while your central midfielder will combine the two, acting as a deep lying playmaker who can both get forward and get back when needed. Your striker will need to be a strong presence in the air, as lots of the chances he will receive will be from crosses. He also needs to be skilled off the ball, opening up chances for your wingers and midfielders, who will be pushing into attack a lot. Defensively, your fullbacks will provide the width in your side and will need to be quick and good decision makers, so they can judge when to go forward and when to stay back. Your centre backs are the key to your team, and if they do not perform the tactic will not work as effectively. The ball playing centre back needs to be able to win the ball regularly, and move the ball into midfield and let his side move forward in numbers, similar to a total football style, whereas the other centre back will be less mobile, but more physically adept, being the main man to stop crosses. Finally, your goalkeeper will need to have very good reflexes, and strong in one on one situations as well as a good commander of his box.

Applying this tactic to the French national team in FM, I was able to achieve a great deal, and personally was very surprised at how ruthless this tactic was in all areas.

The fixtures speak for themselves; not a single loss through the season except for the World Cup Final, just 2 goals conceded in 12 games before the World Cup quarter finals, these factors, combined with the fact that I was able to take France, a team not expected to challenge for the title especially on FM, into the final with this tactic even when the players weren’t fully familiar with it, shows just how great it is. Defensively, it is the best tactic I have ever played with, and provided a solid defence and keeper, your opposition will find it very hard to break through. Attacking-wise, you can see that the further into the season, the more goals were scored, culminating in a 5-1 thrashing of Chile in the quarter finals. For a club, the tactic would be assimilated into the players by the end of preseason, so you would be achieving these kinds of results through the rest of the campaign. 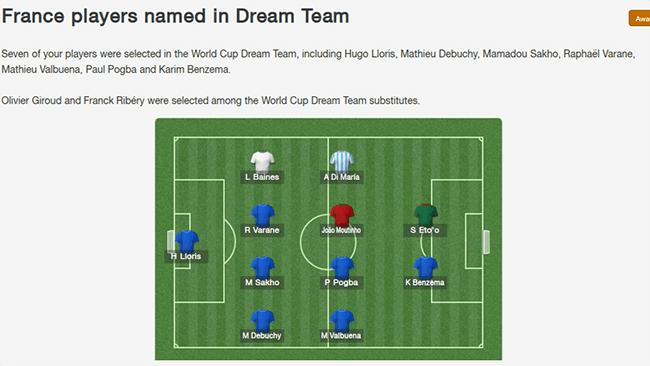 These awards for the French players participating in this tournament, closes any argument that this is not a deadly tactic. Firstly, and most amazingly, the World Player of the Year was won by Valbuena, a player who, at the start of the year in FM, was rated 2 stars for France, and the assistant manager didn’t believe he even deserved a place in the squad. Now, he ended up as the top assister, setting up 6 goals, and therefore won the Best Player award, over some of the world’s best. Next, we see the Dream Team, and this gives a great representation of how it can turn every player into a world beater. The entire right hand side of the Dream Team, consisting of 7 of the 11 players in the starting 11, were French players. The right hand side of this tactic is where the majority of chances come from, and this shows, that if you have good enough players, it can become sensational. Finally, Hugo Lloris won the Best Keeper Award, which is a tribute to the exceptional defensive record this tactic produced, and how it can be unbreakable, helping you not drop silly points against small sides, as well as staying solid against larger sides.

This tactic is one which takes France’s style of play in real life, and with a few small adjustments, turns into a impregnable, goal scoring machine of a tactic. While you may not get instant results, after you purchase the required players to fill in the gaps in your roles, and everyone is fully familiar with it, it will produce some great results for me. Please give me any feedback you have after using it, as I would love to hear about your experiences with the best tactic I have ever used in FM.