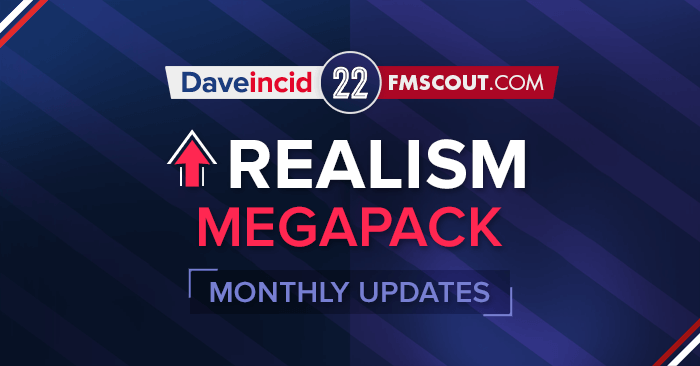 I'm very happy to announce my Increase Realism Megapack for Football Manager 2022! It's essentially the January Update as there was an early version available for my Patreon supporters.


This Megapack improves several values for over 220 Nations in-game to increase realism in Football Manager 22 to a whole new level!
All files are made with my own created database to ensure consistency in the changes.

If you have used my previous versions please remove all the files from the editor-data-folder before installing the Update.

Ensure that you do not use other mods which may conflict with my megapack like:
Youth Ratings, Market Values, Transfer Preferences, Sponsorship, Finances, Languages, League Reputations, Awards, Derbies or Club Data.

Compatibility with other databases

The whole megapack is almost always compatible with all league files (especially DaveTheEditor's Around the World Leagues Megapack, transfer updates and all kind of graphic mods.

I do not answer questions if my files are working with X or Y. If the general information above isn't enough for you, there will be a list of files I recommend on Patreon which are tested for compatibility.
Alternatively, there's a curated list of realism addons here, where you can see which of them can work together or conflict with each other.

If you have questions, critics or you found a bug, please send me a PRIVATE MESSAGE. Do not spam the comment section with those things, as it might confuse or upset other people. I probably won't answer every question, please respect that.

Please check first if the question is already answered. I already have limited resources and my answer probably won't be that friendly if it turns out that you haven't read the text.

This file changes the National Youth Ratings, Game Importance and the State of Development of all Nations.
The Development-System has changed completely in FM22 compared to FM21! So I had to re-calculate all values.
In FM22, we finally get "Lost Wonderkids"! This is just awesome and adds a lot more realism by default already!

This file has massively improved compared to FM21!

Salaries:
Salaries are now more oriented towards real data in all Nations. A Player in Ghana no longer earns 500k a year, but maybe 30k. World-class Players will now earn more money. Default is too low in this area. Instead of around 20m€/y they now earn up to 40m€/y (Brutto of course).

Market Values:
The market-values have been adjusted in such a way that they result in more realistic transfer fees.

Sponsor Values:
The sponsor-values where calculated according to various criteria in order to show the existing situation as well as future increases down to a Nations financial power. They are also calculated to balance the financial situation of club finances in the long-term.
Clubs (except the really big ones) usually struggle much more financially IRL as it is in FM. With these adjustments, this should be represented more accurate. With the latest update there is much more dynamic within the FM-World. Smaller Clubs can rise and bigger Clubs can fall.

Those changes are big...I'm really excited about this one!
There are Leagues which are known as "Development»-Leagues". The whole league in general buys young players and sell them to bigger ones. With «Club Transfer Preferences» this can be partly added to a specific Club but the effect might disappear once a new Chairman takes over.
Now...I researched all Nations on transfermarkt.com and analyzed the average age of signings of the last 5 years for all Top-Division-Clubs.
If the average age is below 24, its added as a national preference. It works like a charm! This will now not only represent the transfer-flow in terms of nationality more accurate, its now also by age!
The following Nations are affected:
- Denmark
- Slovakia
- Latvia
- Austria
- Ireland
- Estonia
- Albania
- Belgium
- Switzerland
- Croatia
- Slovenia
- Kirgystan
- Ghana
- Venezuela
- Canada

There are some Clubs, which have a specific preference for a nationality of players which doesn't affect all Clubs in it's Nation. I've researched over as they are only a preference and not a general club philosophy. This file is for Clubs where this preference has been held at a high level for years.

There are some missing taxes in Austria which are leading to a too good financial development of the Clubs. This should be fixed with the Winter-Update. Until then, this file fixes it.

I made corrections for 95 Nations for "years to gain nationality". It was quite difficult to get it right because sources sometimes vary and you can't add "received citizenship through good relations with local politicians". There are some interesting years included.
Might be worth scrolling through the Nations to find out

This file fixes literally all missing and illogical award-reputations in all Nations and in all international competitions as well according to my own research-database.

This is very important when it comes to a player's transfer-behaviour, his loyalty, his career-path, his market value, the reputation of a Club and much more!

The best player in a weak League will now be much quicker unhappy if he wins awards and he thinks he is too good for the Club. Convincing these players to stay is much more difficult! On the other side it's a chance for a Club to grow their reputation if they are able to keep these players. It's very tricky but it adds so much more dynamic!

Most important awards created for over 200 Nations worldwide, like:
All these awards are of course in line with all existing reputation-values to fit perfectly into the whole system!


Please Note: The league needs to be set as playable to see the awards!

This file adds 300+ missing Derbies from Clubs and Nations in over 50 Nations as well as over 1000 reputation-adjustments to ensure a logical worlwide behaviour.

This file adds a lot of missing data for almost 1500 1st and 2nd-Division-Clubs in 150 Nations worldwide:

This file now plays a crucial part for the «Sponsorship» part of my «Salaries, Values and Sponsors»-File. This is big, really big!
Explanation:
In the editor, Sponsorship-deals of most clubs have ticked the option «renew income». This can be compared to an arcade-racing-game in the past, when you should lead 2 rounds ahead but suddenly the 2nd placed driver appears in your back-mirrow. In other words, no matter how bad a club performs, sponsorship deals will be always similar to the one set in the editor. This keeps big teams big for like forever. I have now deleted those «renew income» worldwide for all 1st and 2nd-Division-Teams. The result is a higher level of dynamic in long-term-saves.

Don't ask me how much time this file cost me. ^^ Update: There are some smaller fixes for the distribution in certain Nations such as Albania, Belgium and South Africa.

Geographics:
These changes affect:
and definetly other stuff too which I haven't found out yet.

Languages:
This will represent the diversity of Nations languages much better. Beside adding official languages to Nations there are also Non-Official Languages added to represent People who speak a 2nd or even a 3rd language without having its Nationality.

I for myself speak some Spanish, but I have no relation to any Spanish speaking Nation. All data is from official sources like wikipedia etc.


Please Note: It could be that some data are already in-game by default compared to FM21. In this case those data will be overwritten, as it would be nonsense to check them all one by one. This isn't a problem at all. :)

NATIONS AGREEMENTS (NEW)
This file by DaveThe Editor is now again included. It adds 24 agreements between Nations. You can find this information in the Nation-tab-overview!

LEAGUE REPUTATION CHANGES (NEW)
This file lowers the gap slightly between the Top-Nations and all the others in Europe. It also boosts Top-Nations outside of Europe slightly and should improve the balance in longterm-saves.

TICKET PRICE ADJUSTMENTS (NEW)
I have adjusted Ticket-Prices in Nations, where they are getting calculated wrongly, which often leads to way too rich teams in certain Nations. This mainly affects South America (Bolivia, Colombia, Venezuela etc) but also other Nations like Iran, Iraq. It's still not possible to add the correct prices but at least it's much more realistic right-now and prevents Clubs or whole Nations to be a financial powerhouse for no reason.

The following files have not yet been created yet because I'm not sure whether they are necessary in their current form. This will be evaluated properly and might be added in future updates.

HOW TO INSTALL Increase Realism Megapack in FM22

Place the files in your "editor data" folder, by default located at:

34 comments have been posted so far.