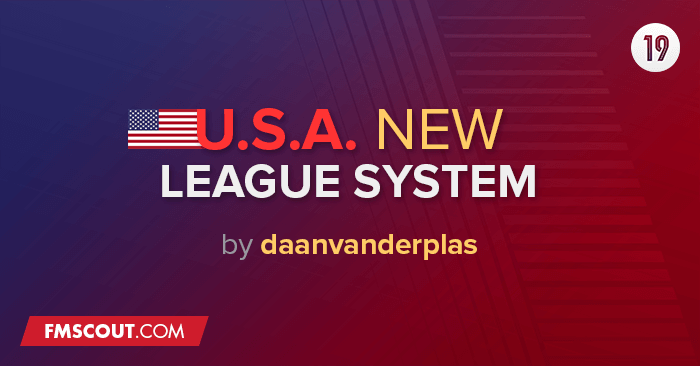 This database contains 7 playable divisions, like the English structure.
All clubs are sorted on reputation in Football Manager.
The competitions start in August and end in April, there are no playoffs.
All competitions have prize and tv money compared to the European top competition, so the American clubs will be competitive in the future to European clubs.
I have added 6 different cups.
The US Cup is the general cup and the winner will participate in the Concacaf Champions League.
The finals of the APL Cup will be held after the American Premier League season. All clubs participate in 4 groups of 5 during the season. This cup has a high reputation and high prize money.
There will be a super cup and the other leagues have there own cups at the end of the season.

In the autumn there will be a lucrative cup between the 2 top teams from Argentina, Brazil, Mexico and the USA.

Clubs are sorted on reputation in FM. All the academies and affiliations of MLS teams are now B- and C-teams. All academy teams, both the MLS academies and independent academies have a maximum age of 23 years old

In the 8th unplayable division I placed some former and future MLS and USL clubs that will climb up the league ladder.