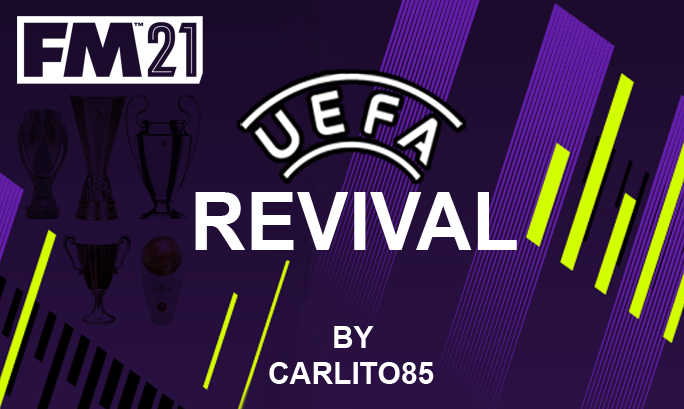 Hi all! It's way overdue but better late than never. The UEFA Revival project is finally back for FM21 and I'm planning to make this one bigger than ever. As always there are tons of options currently available, as well as more ideas that I have planned but haven't been able to implement yet. More files will be coming soon.

This is a project dating back to Football Manager 2013. It originally started out solely as a throwback to the 1999-2003 format of the UEFA Champions League, which contained 2 group stages, and has since progressed into a fully customized structure where I've managed to find room to bring back the UEFA Intertoto Cup & the UEFA Cup Winners' Cup. As of now there are 50 separate UEFA files, in addition to the UEFA Youth League revamp and the other continent files so there is plenty of choice for everyone.

- There are various different formats for the UEFA Champions League. Whether you prefer the older, straight knockout system with fewer teams and nations involved, the 1991-93 version which consisted of a group stage for the final 8 teams, the 1997-1999 format with the top nations allocating 2 teams each, the 1999-2003 version which featured a second group stage for the final 16, or the current system with 1 group stage followed by the knockout rounds - it's all included here.

- If you're someone who prefers the UEFA Cup over the UEFA Europa League, that's in here too - again in various formats. There's the old straight knockout format from the 1990's, or the 2004-2009 format of a five-team group stage before the knockout stages. Alternatively if you'd prefer to continue on with the UEFA Europa League, there are a number of choices for this. In addition to the current format, a 2 group-phase format has been included to mirror the 1999-2003 UEFA Champions League, as well as the older streamlined qualifying stages.

- The UEFA Cup Winners' Cup returns and includes 3 different formats, accomodating 32 nations or 54. Again, it's your choice. As an alternative to the Cup Winners' Cup, the recently announced UEFA Europa Conference League has been included (and can be played from the 2019-20 season). Should the domestic cup winner and runner-up both qualify for continental competition, the place will go to the next highest-placed team in the league.

- Tired of dragging through those friendlies during pre-season? The UEFA Intertoto Cup is included in all files and while it can not only offer some valuable competitive game time for your squad, there are payouts in each round, along with the chance to qualify for either the UEFA Cup, UEFA Europa League, or the UEFA Europa Conference League, depending on which file you choose. The competition has a number of formats dating back to the 1990's, and up to 3 teams can qualify for higher competition. Intertoto Cup qualification is determined via league position.

- Should you decide you'd like to change things up, the UEFA Super Cup comes with a brand new option of playing with 4 teams in a pre-season tournament. This will consist of the winner of each UEFA competition. There is also an alternative where the UEFA Champions League runner-up will be included. The current format is also included should you prefer to keep things as they are.

- The FIFA Club World Cup will be available in the near future with a format loosely based on the planned expansion in 2021. 20 teams will compete in a Group Stage, with the top 2 teams in each group progressing to the knockout stages. This competition will take place every 2 years instead of every 4.

- The CONCACAF ﻿and CONMEBOL merger into a 51-nation structure is back this year, featuring 5 competitions for teams to compete which mirror the UEFA style.﻿ This comes complete with custom graphics.

- Additionally, the AFC Champions League is back as a separate option, and uses the same 2 group stage format as the 1999-2003 UEFA Champions League. The AFC Cup also mirrors the 2004-2009 UEFA Cup format of 5 teams playing 1 round of matches in the group stage. You then have the AFC Super Cup which features the winner of each competition.﻿

- Transfer-360 allows you to buy/sell/loan players at any time throughout the calendar year. There are no more transfer window limitations in place, which could be a real game-changer depending on who you decide to manage. As of now this includes 34 UEFA nations that are available in the default database.

NOTE: Transfer-360 now has its own separate download page, which can be found at the bottom of this post

- All of this comes with a detailed file guide to help you decide which file you'd like to begin your save with.

- File C added for AFC Revamp/CC Merger & UEFA Youth League. This is for specific compatibility in all files containing both the UEFA Europe League and UEFA Cup (in particular UEFA files #41 and #42). UEFA Cup & UEFA Europa League competition history has been separated to avoid duplicates in the club honours in these files 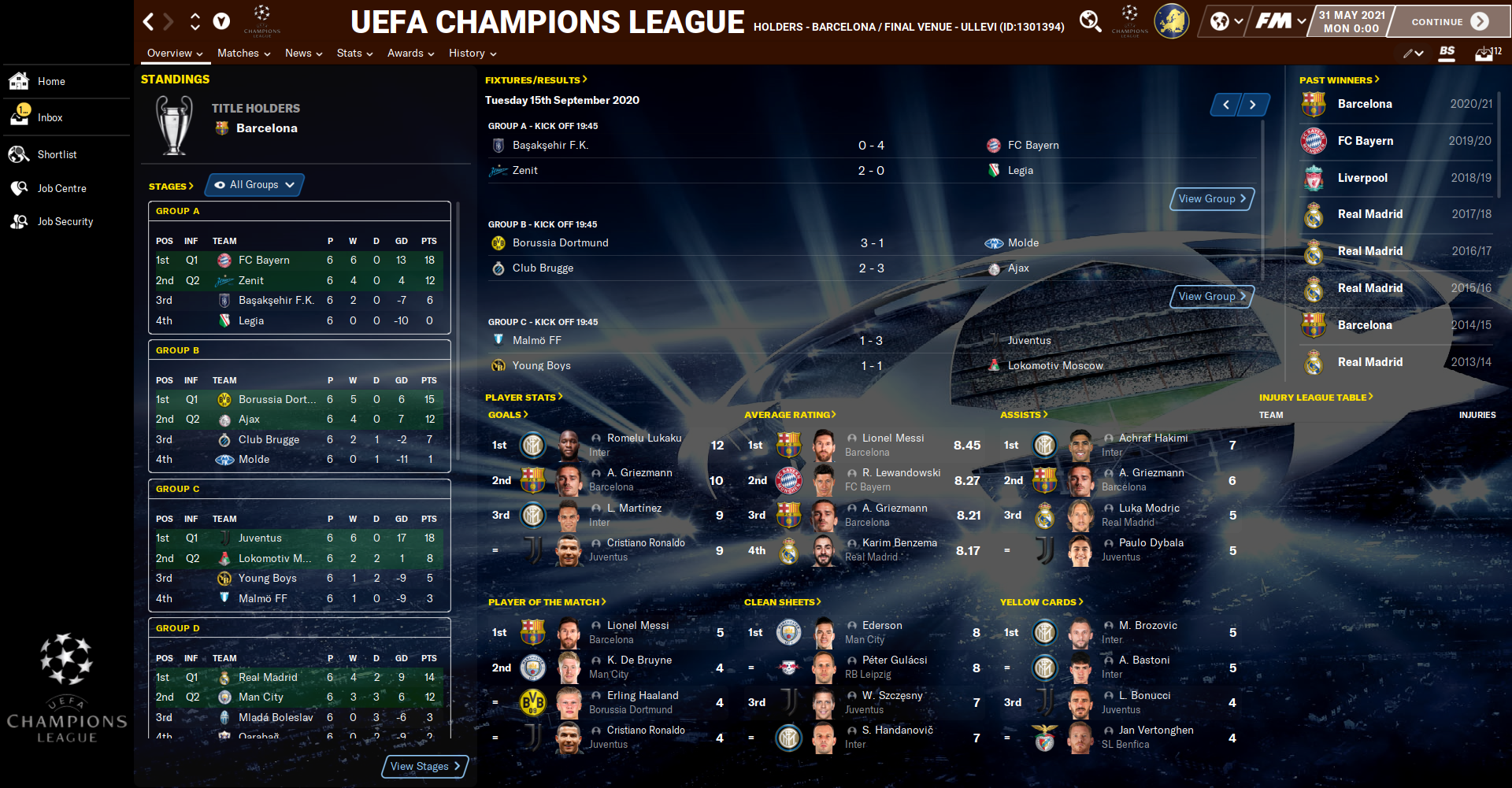 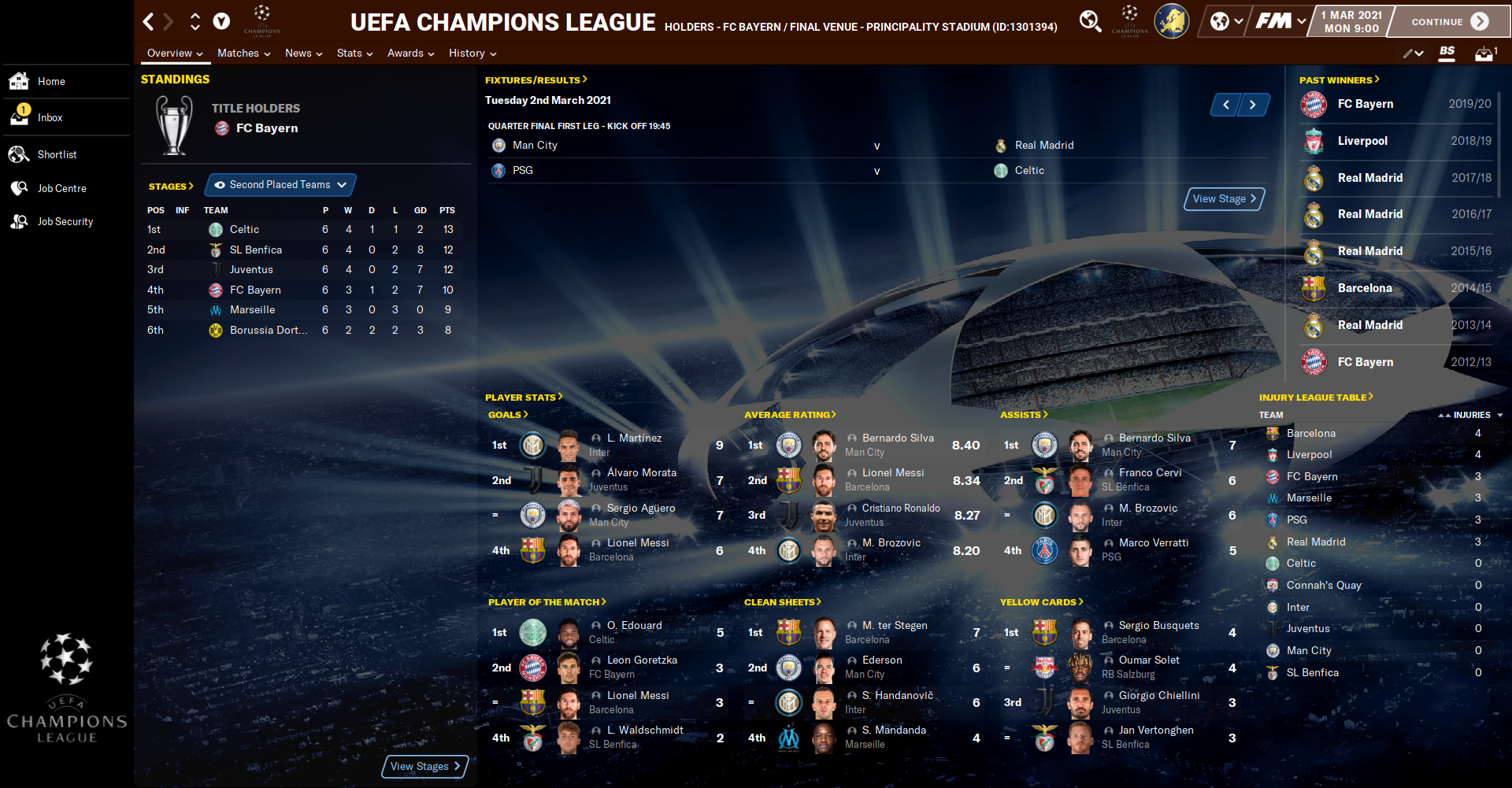 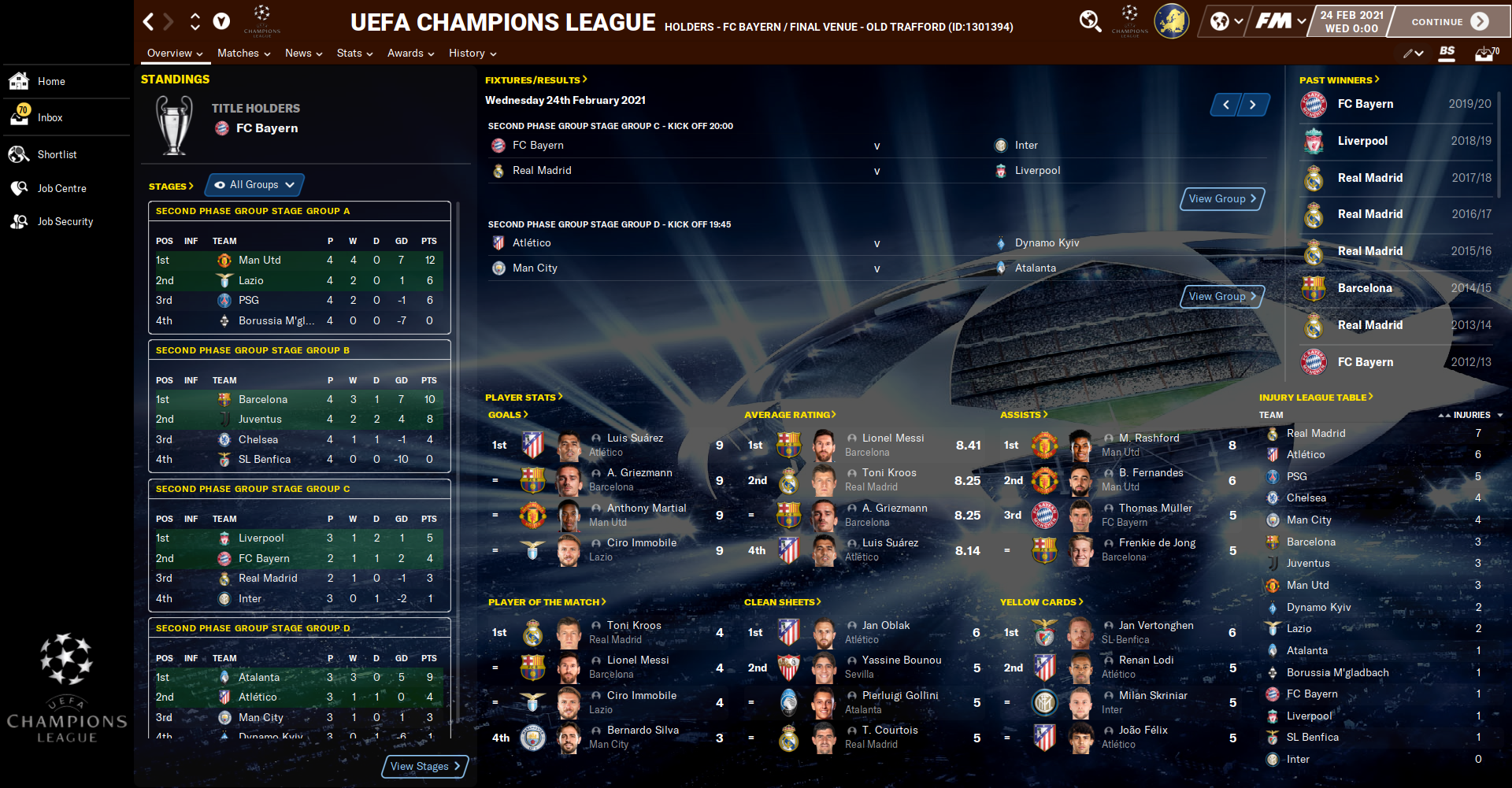 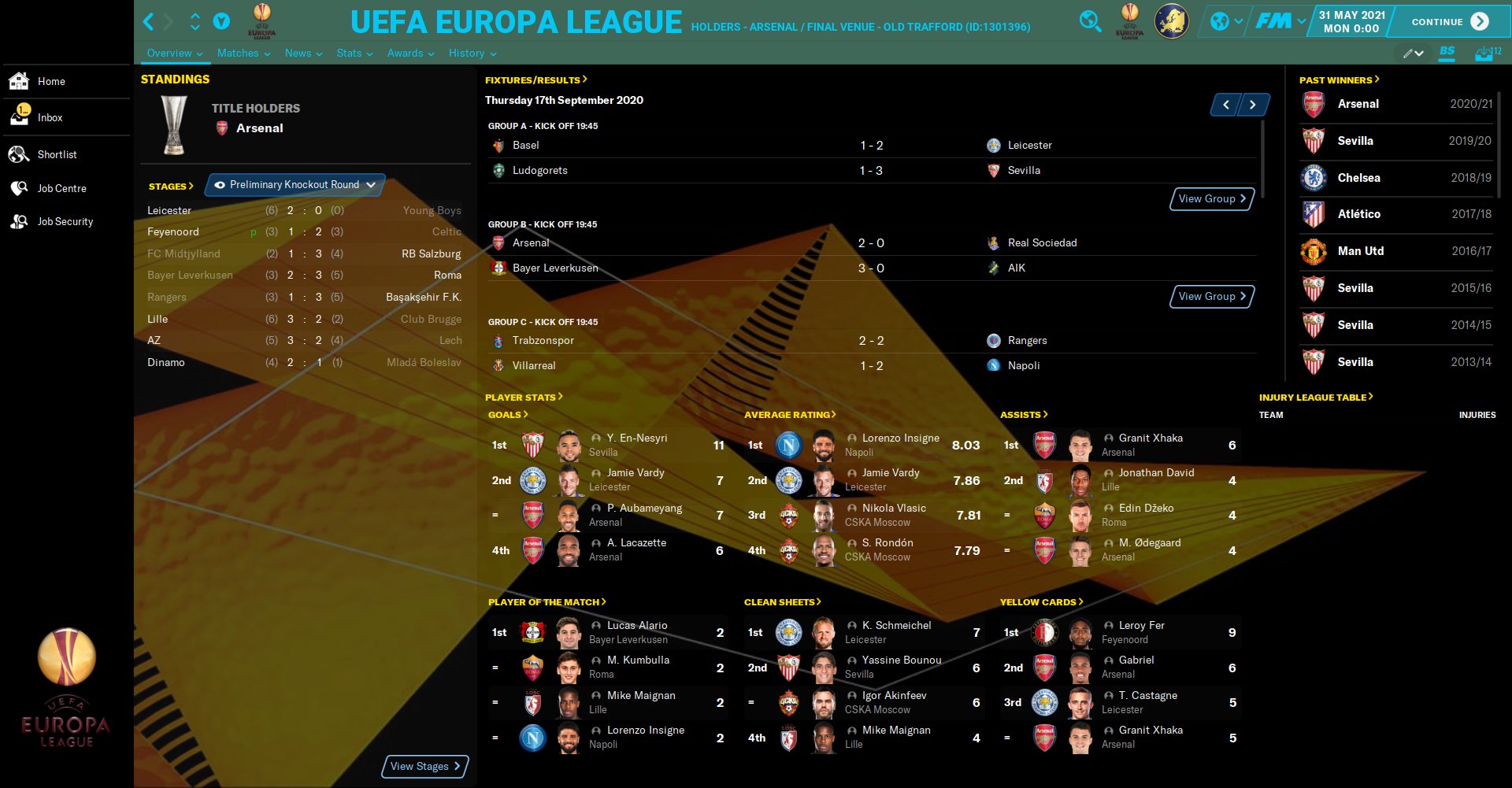 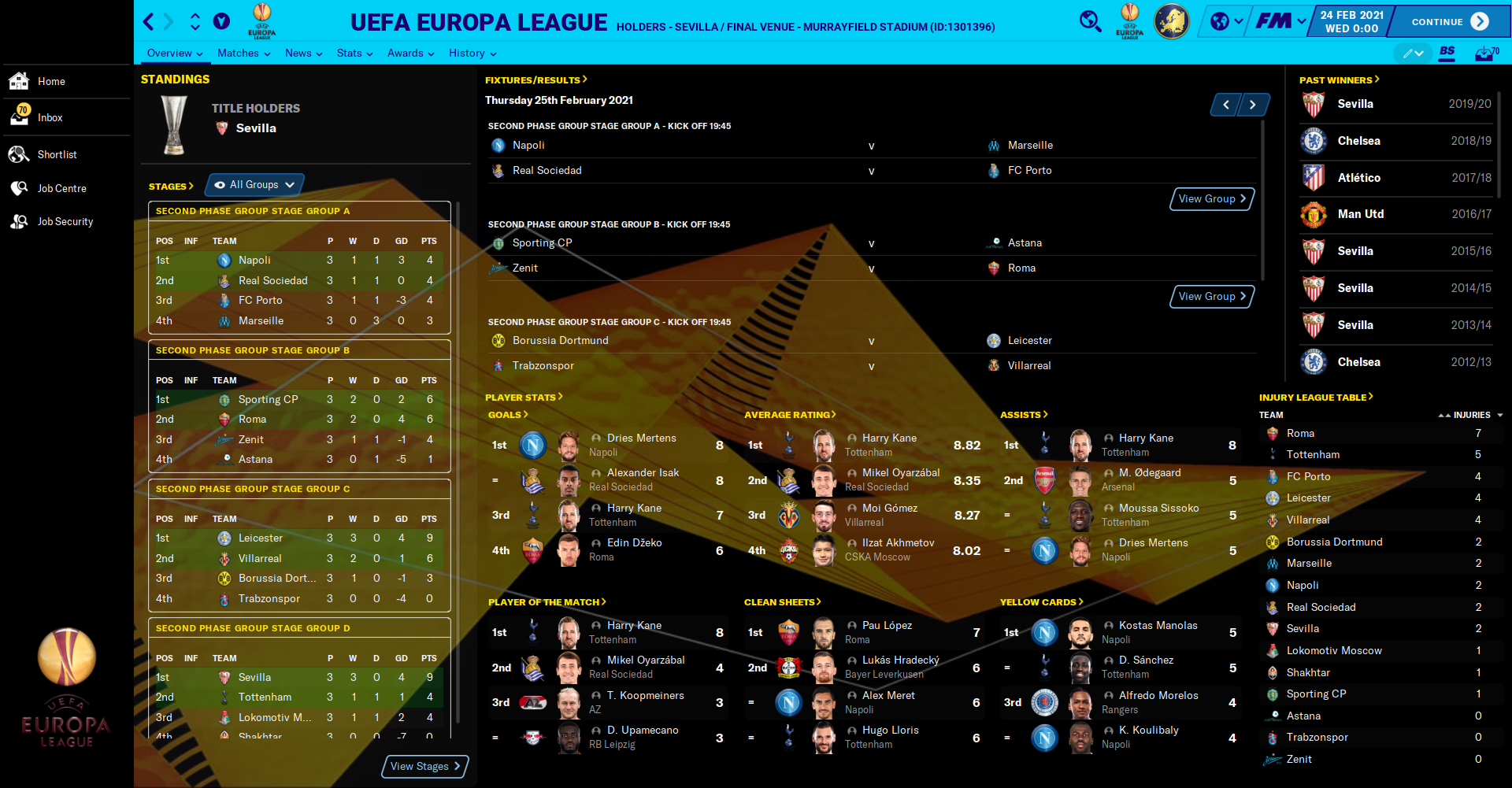 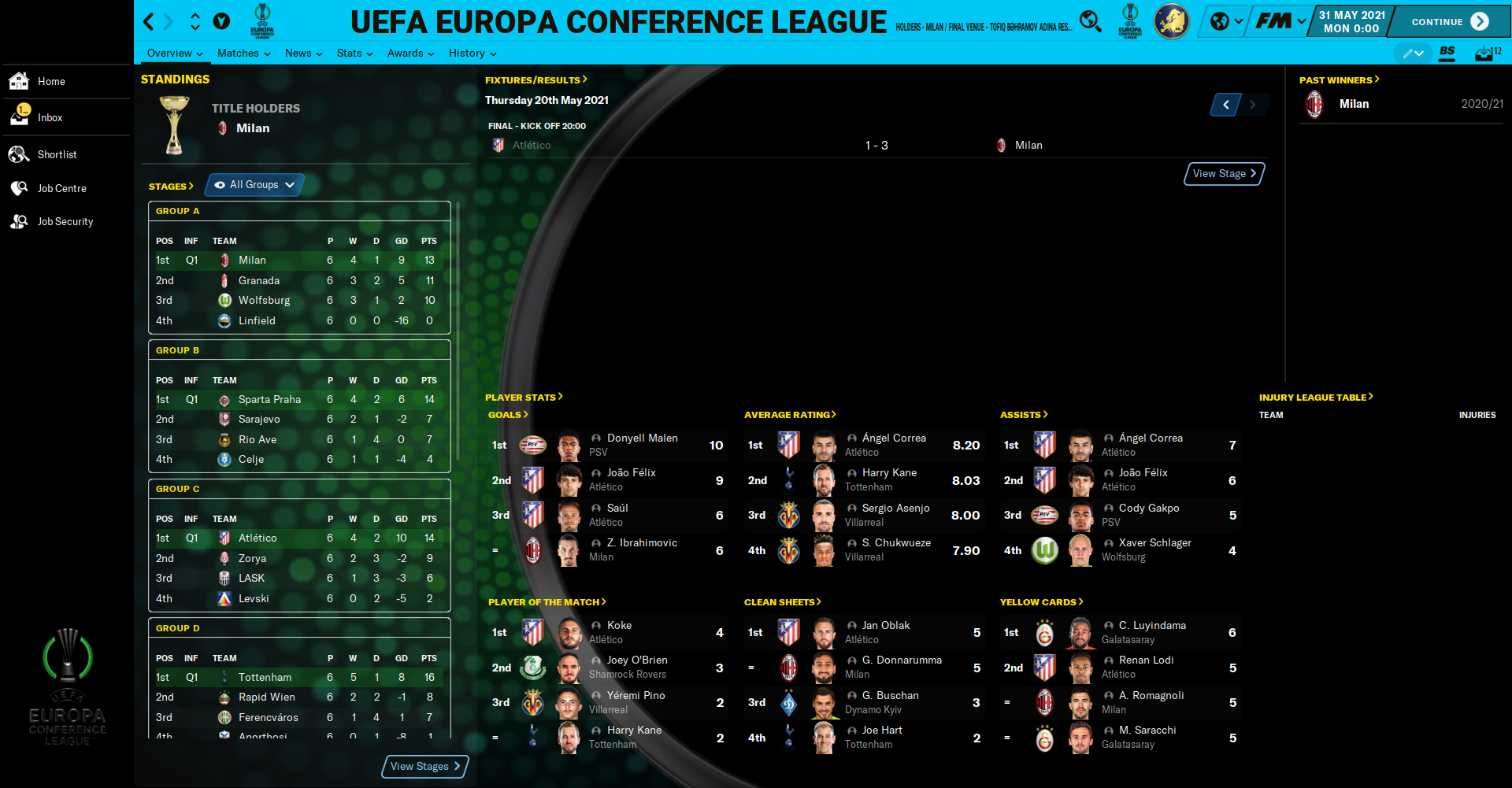 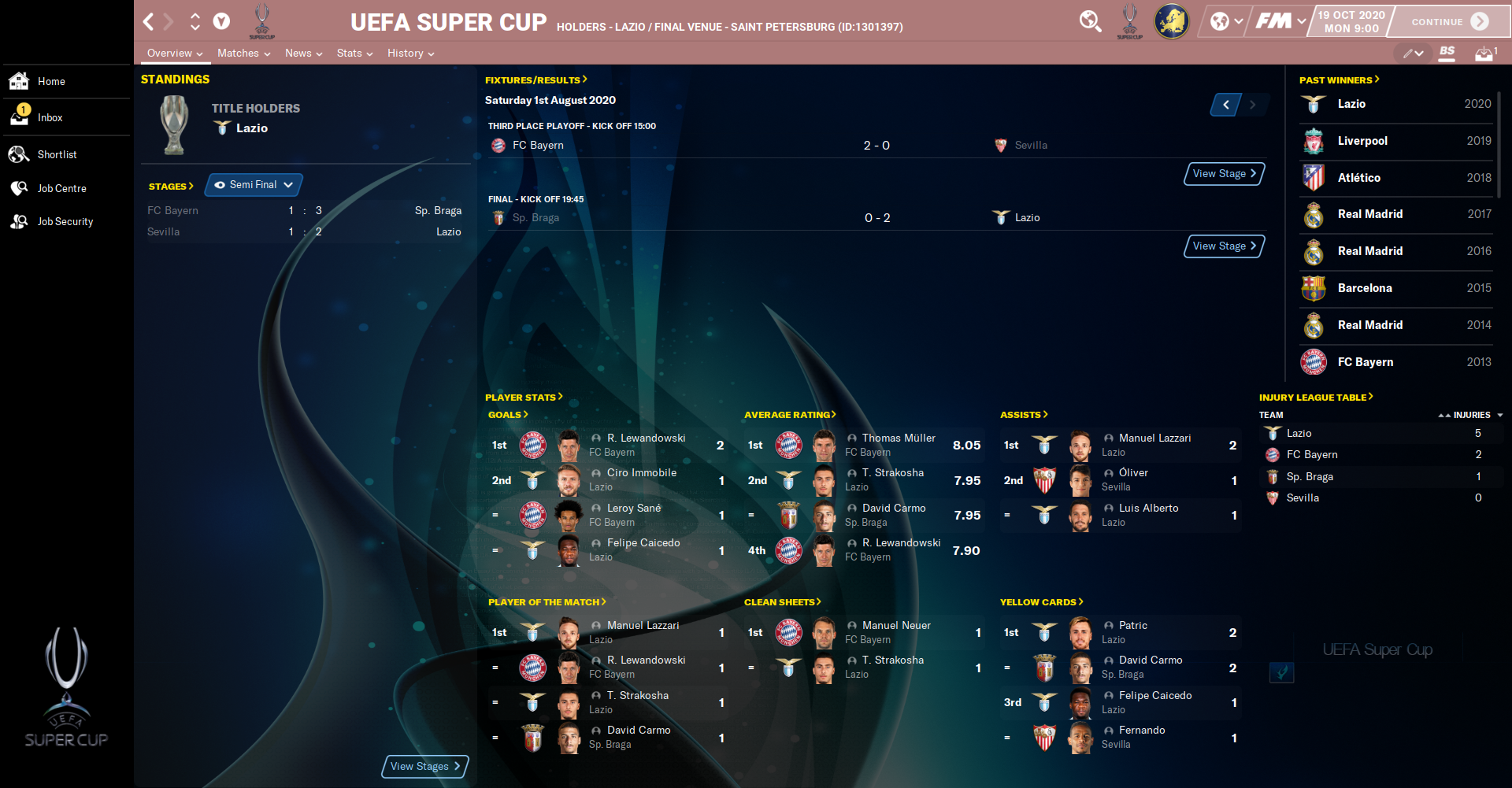 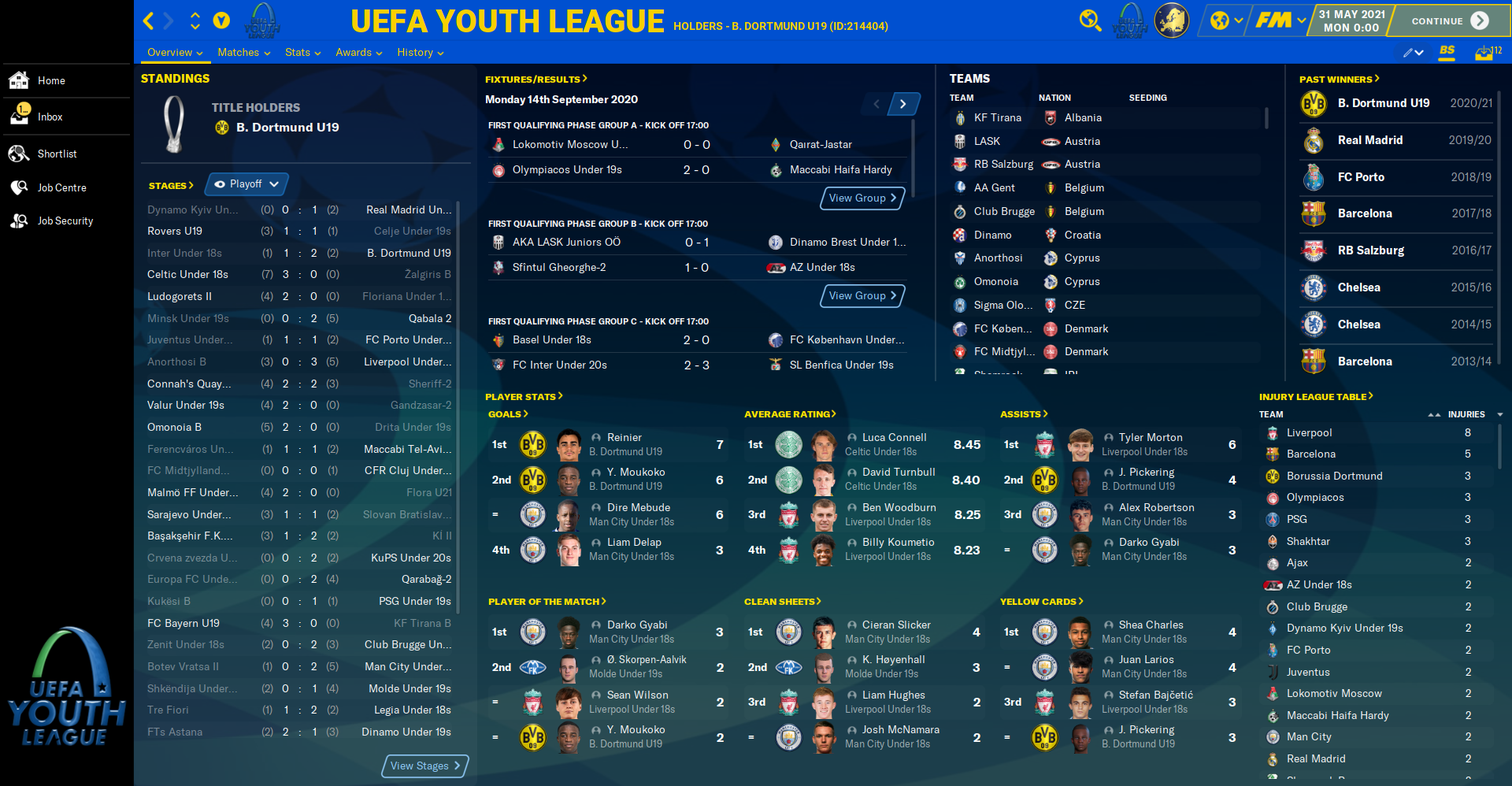 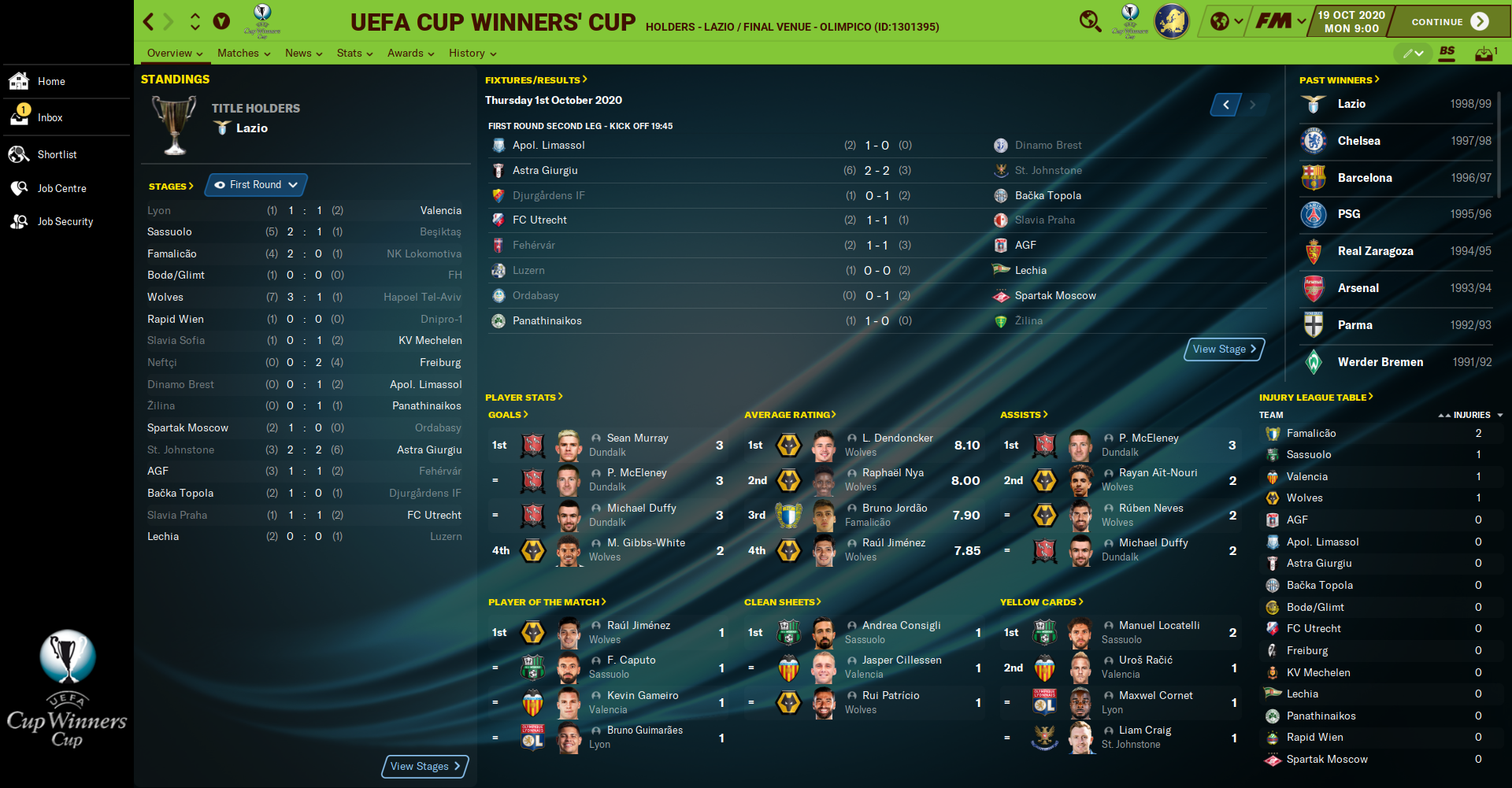 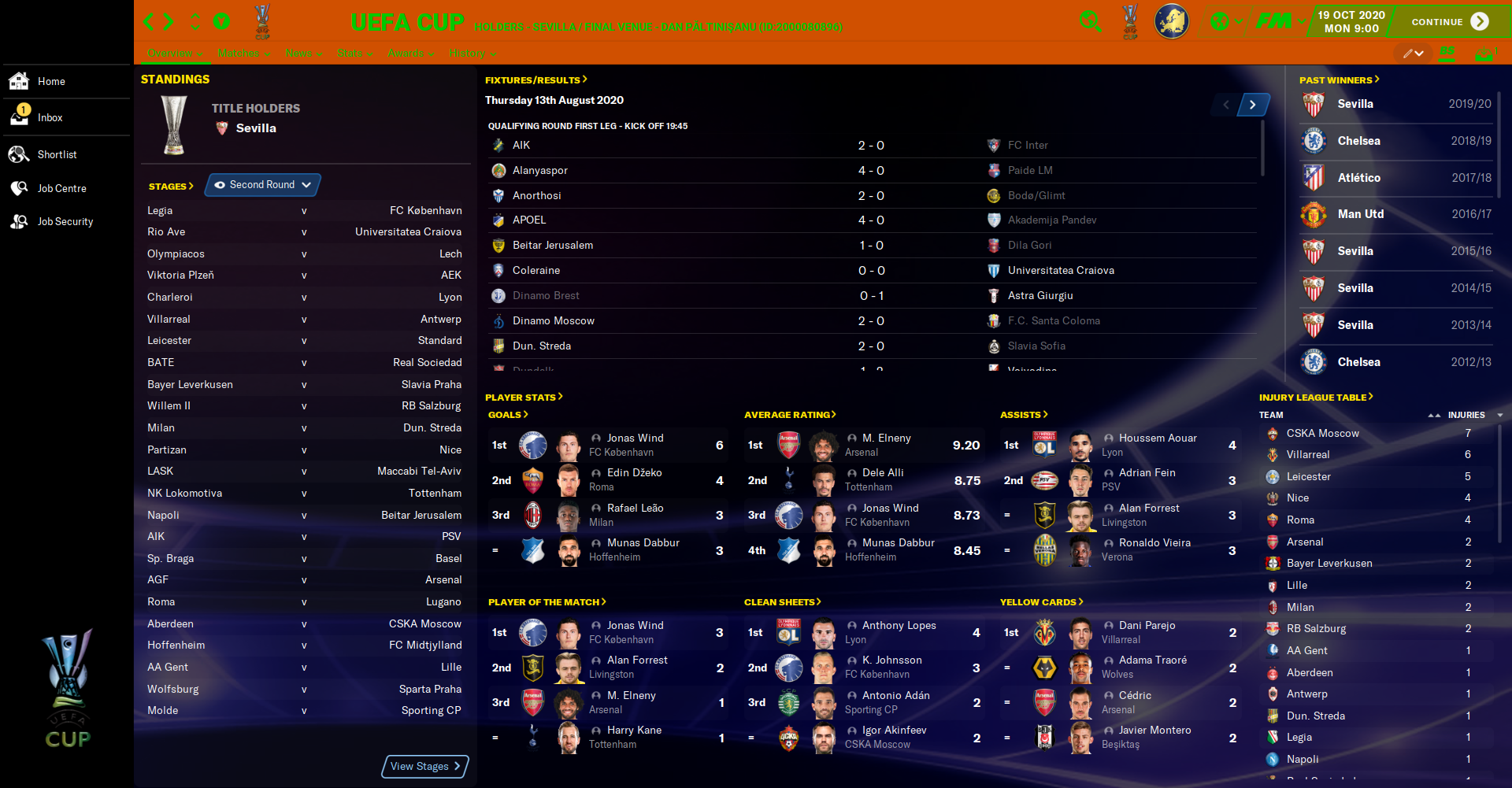 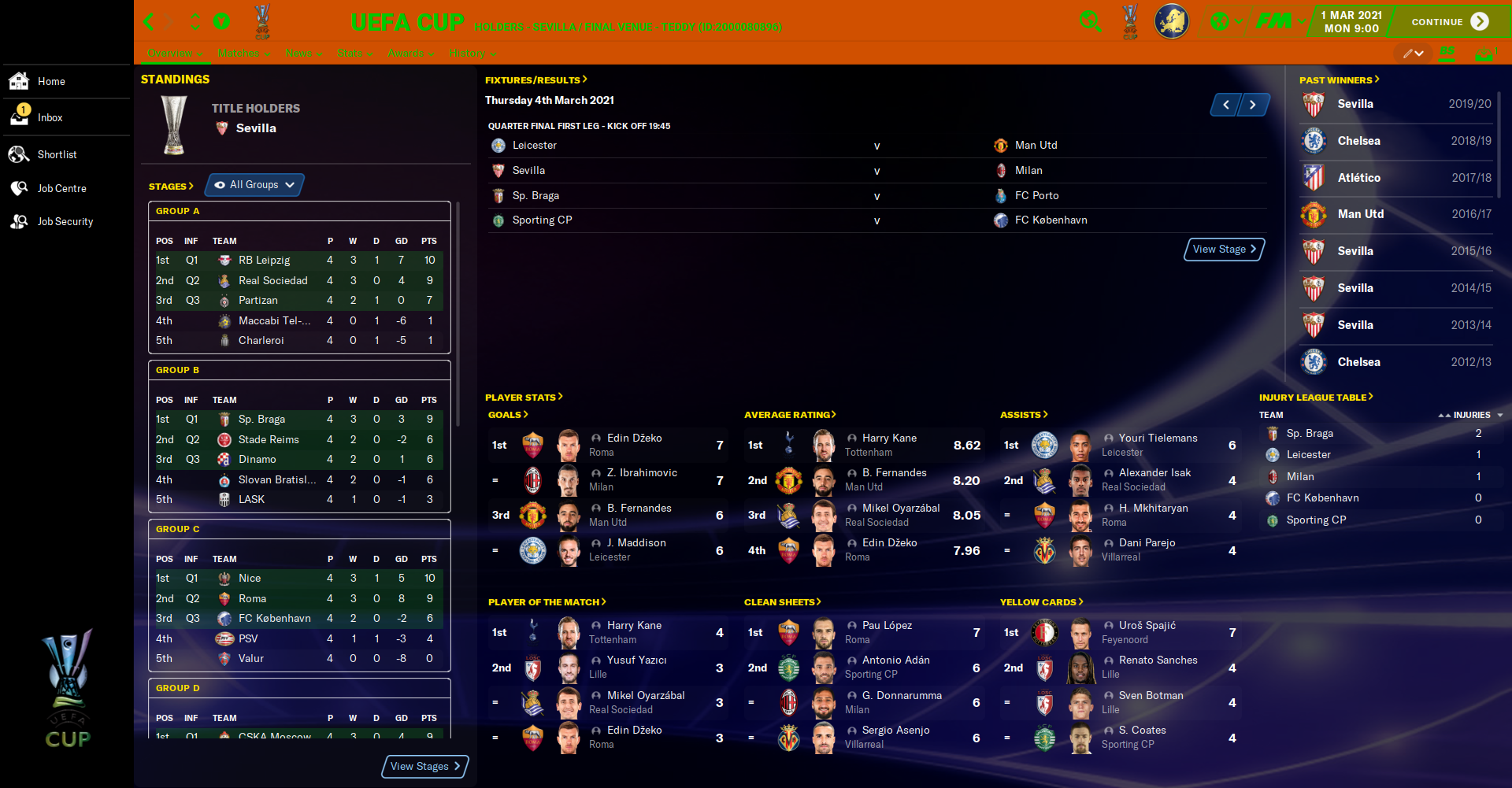 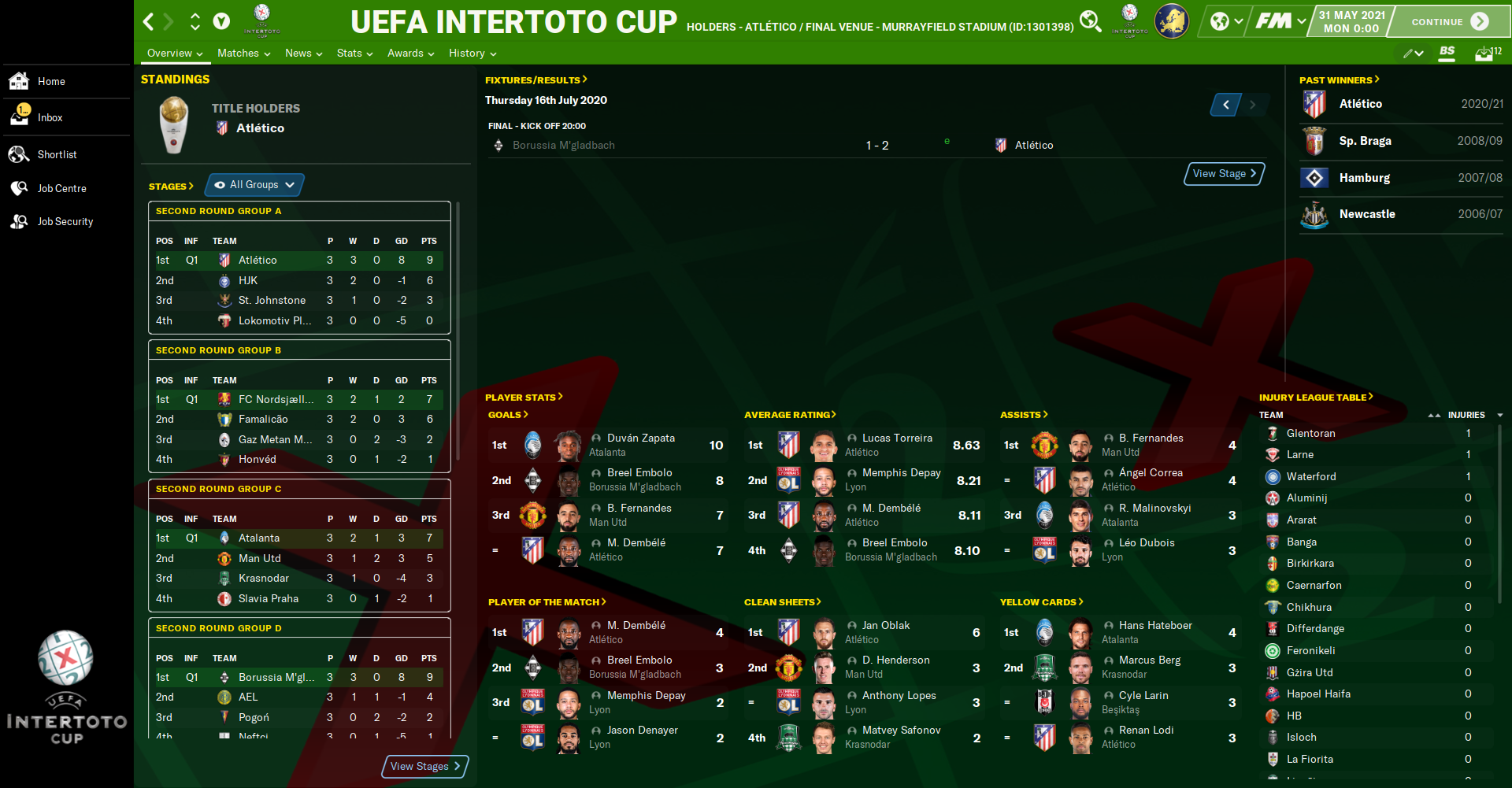 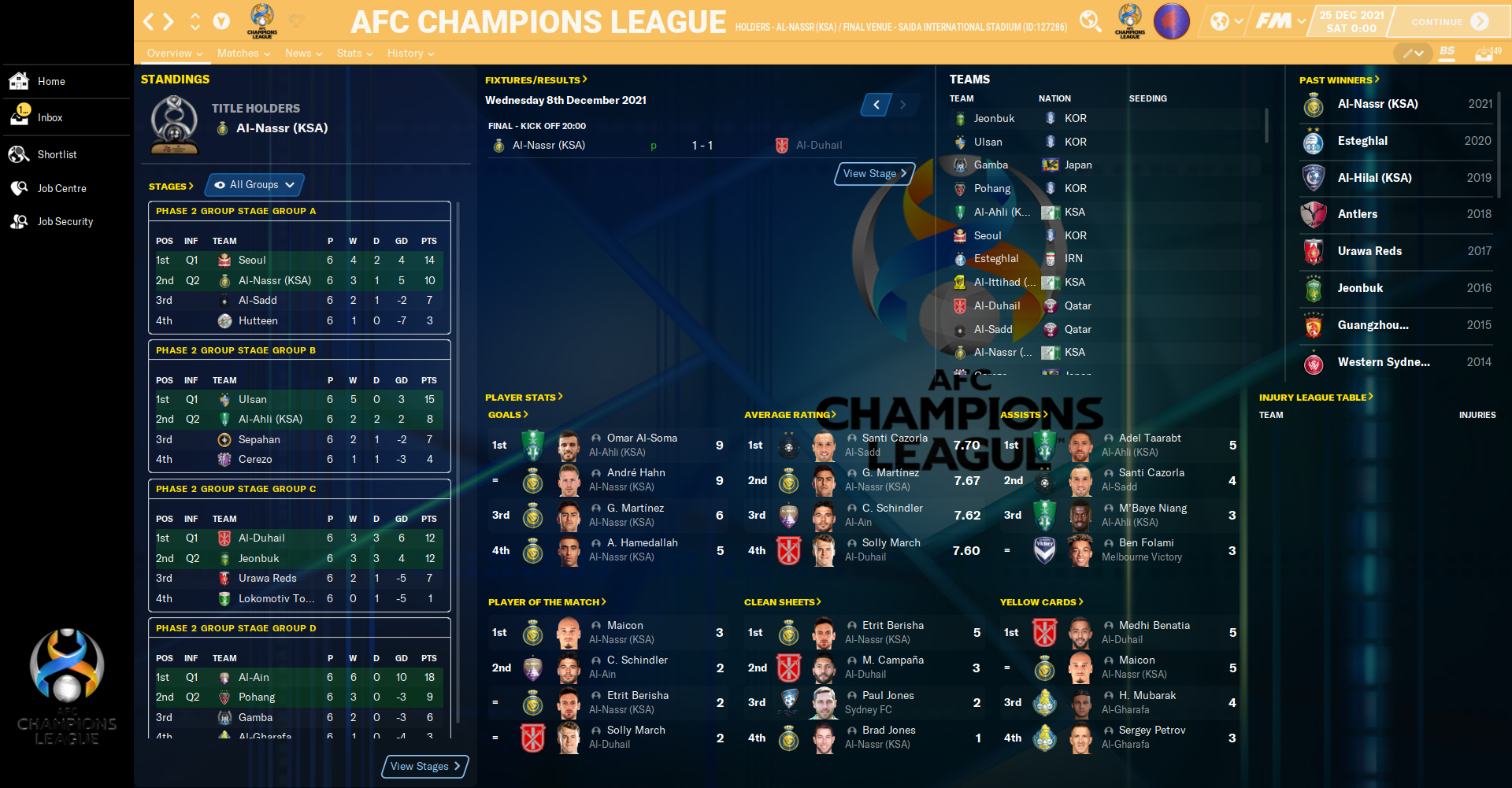 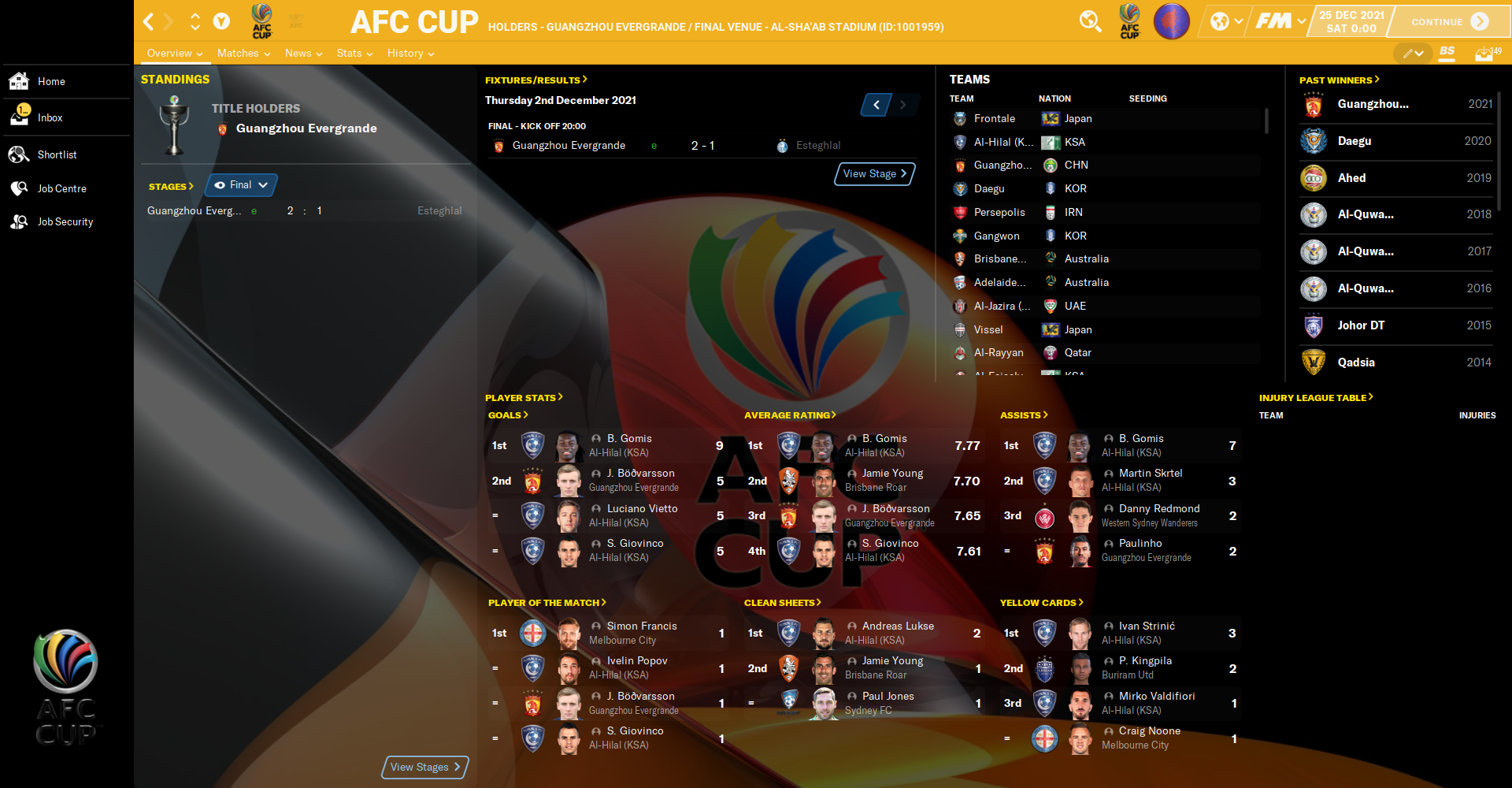 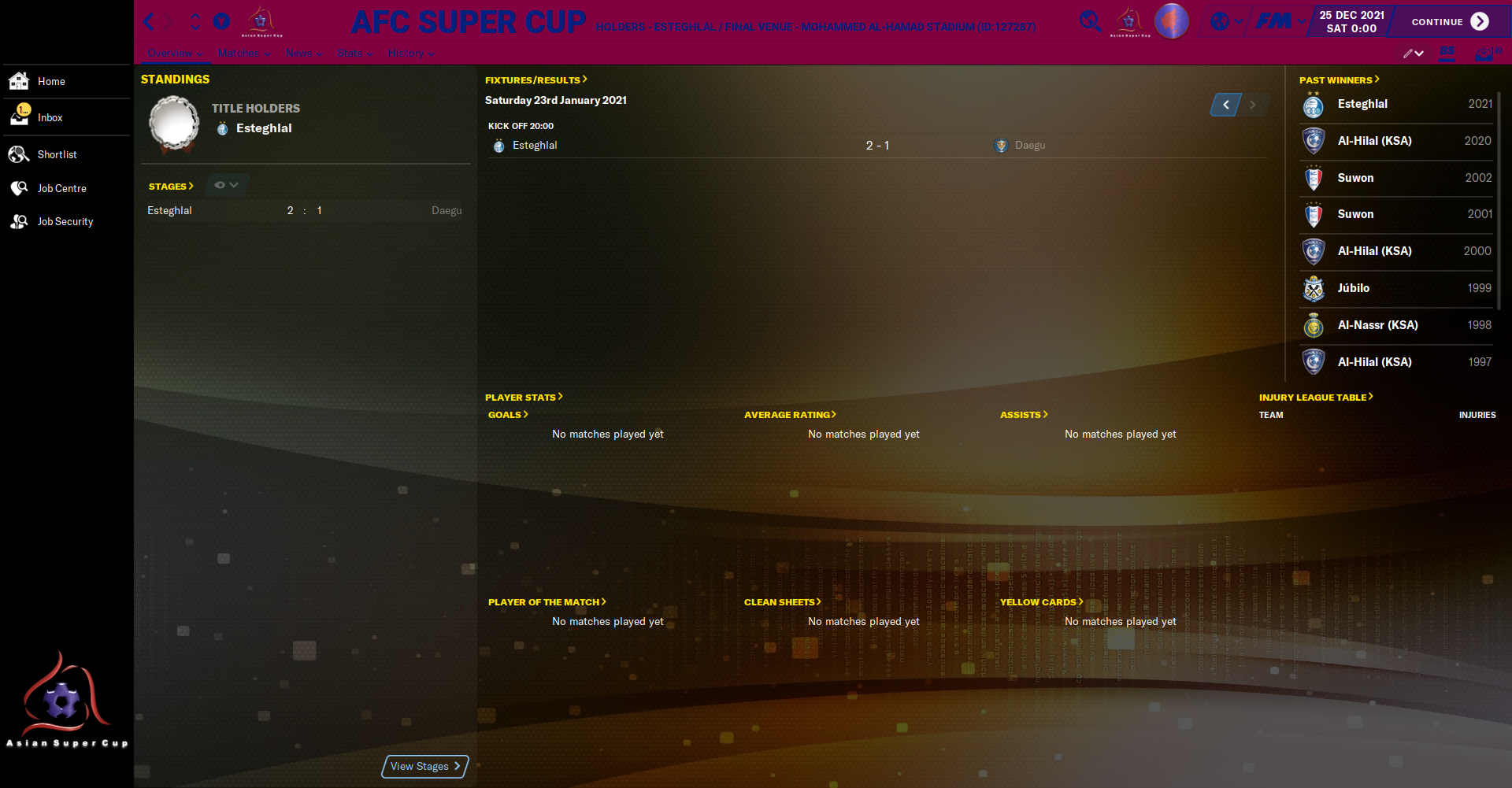 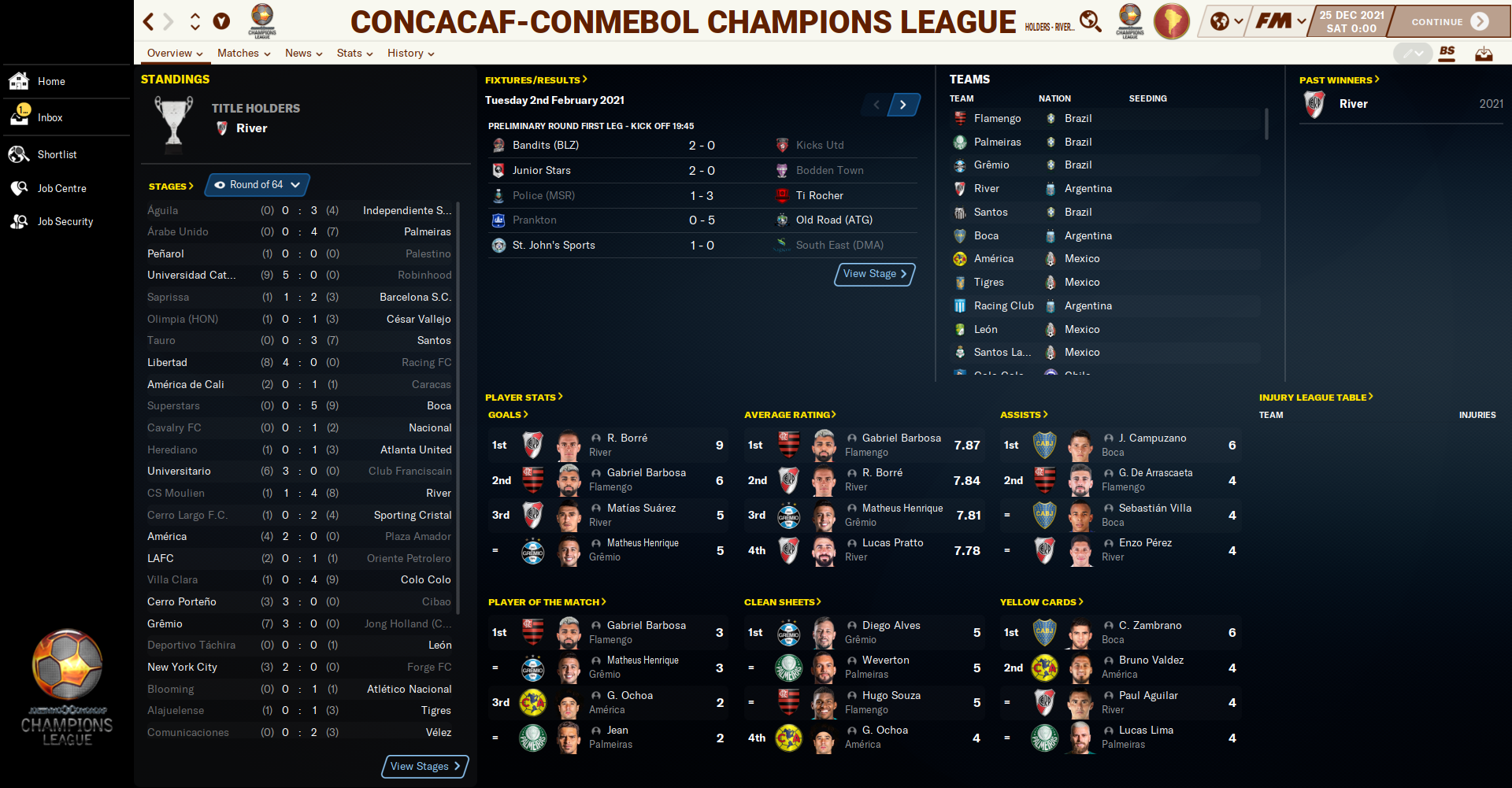 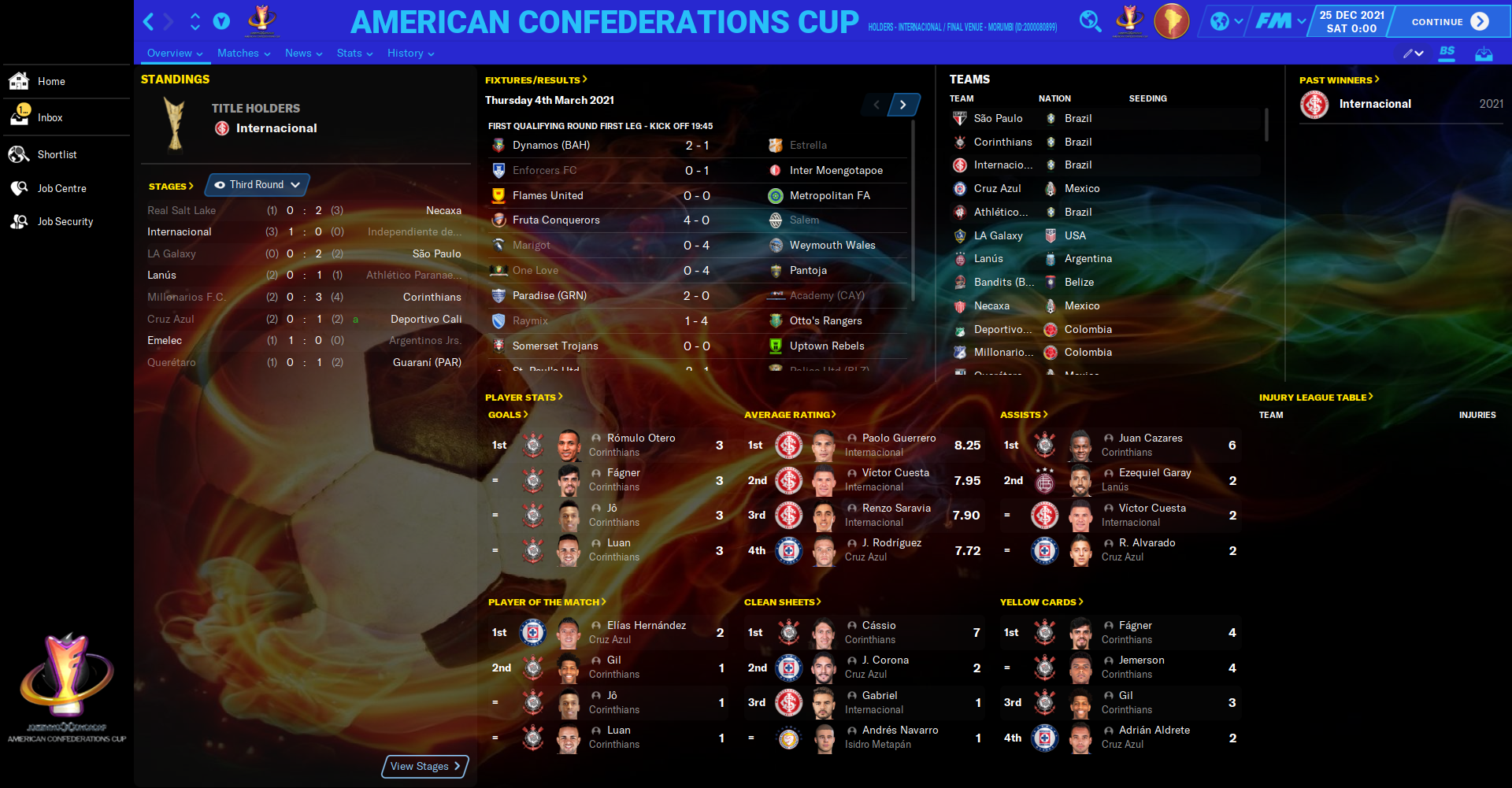 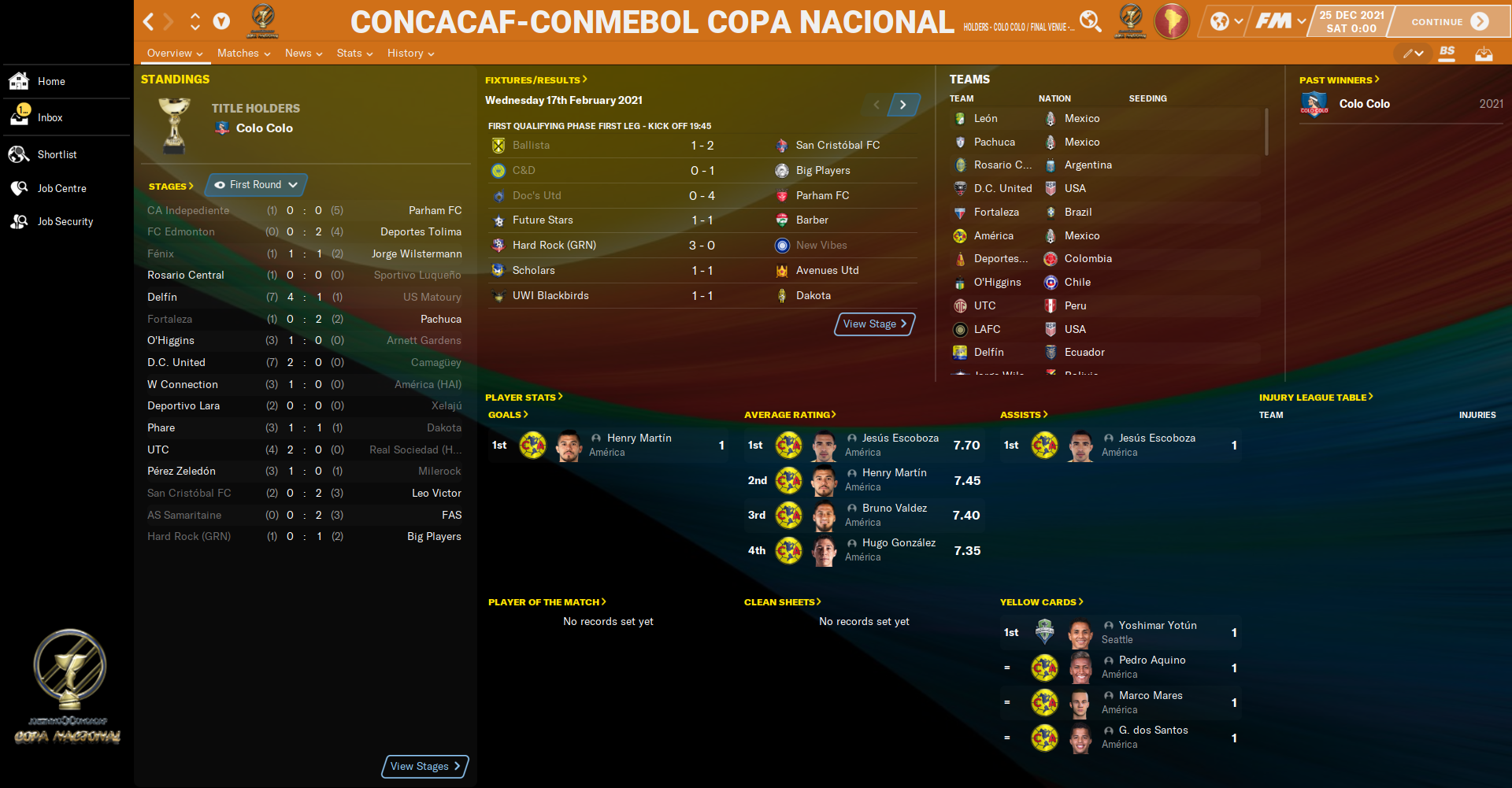 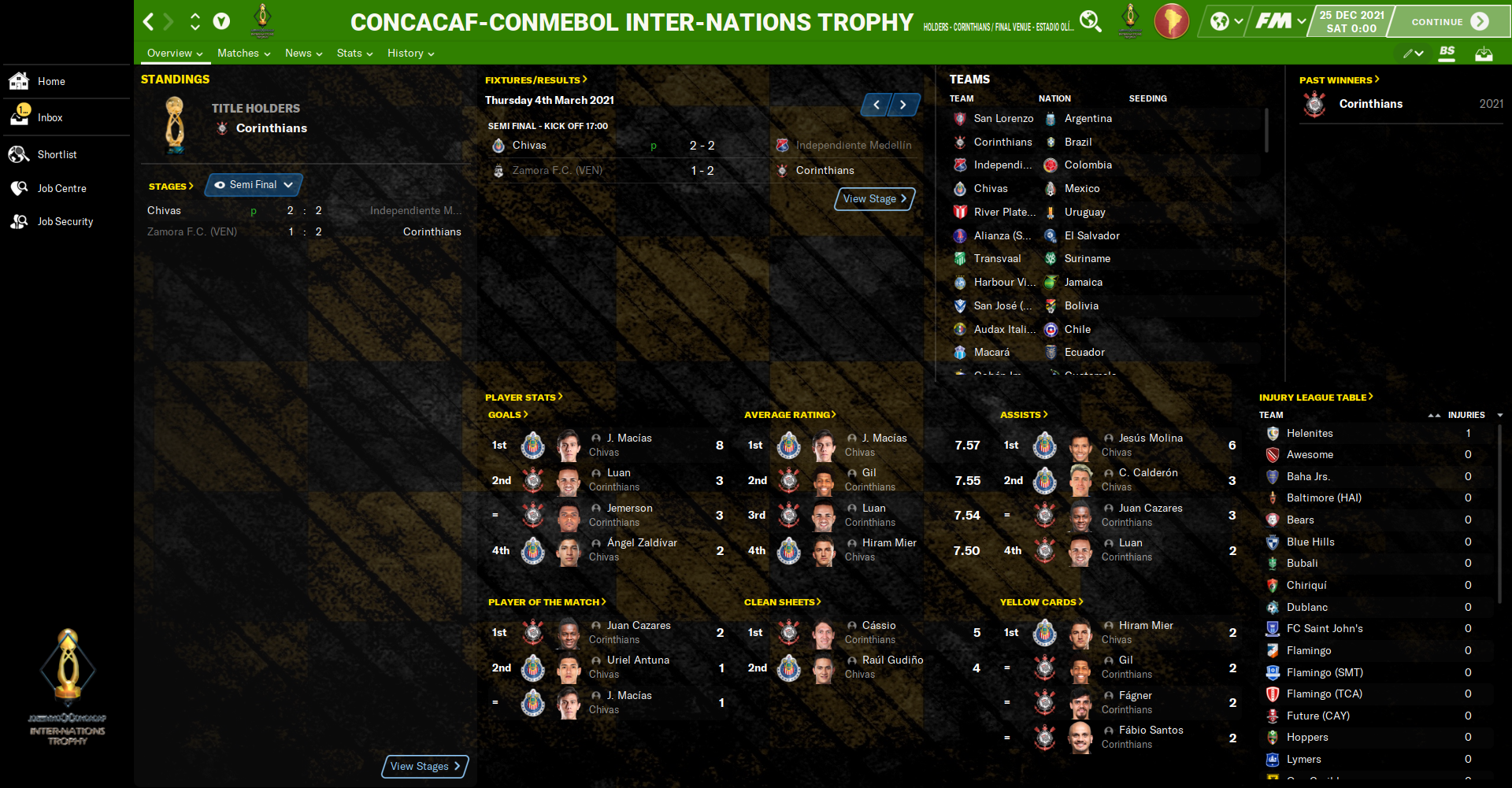 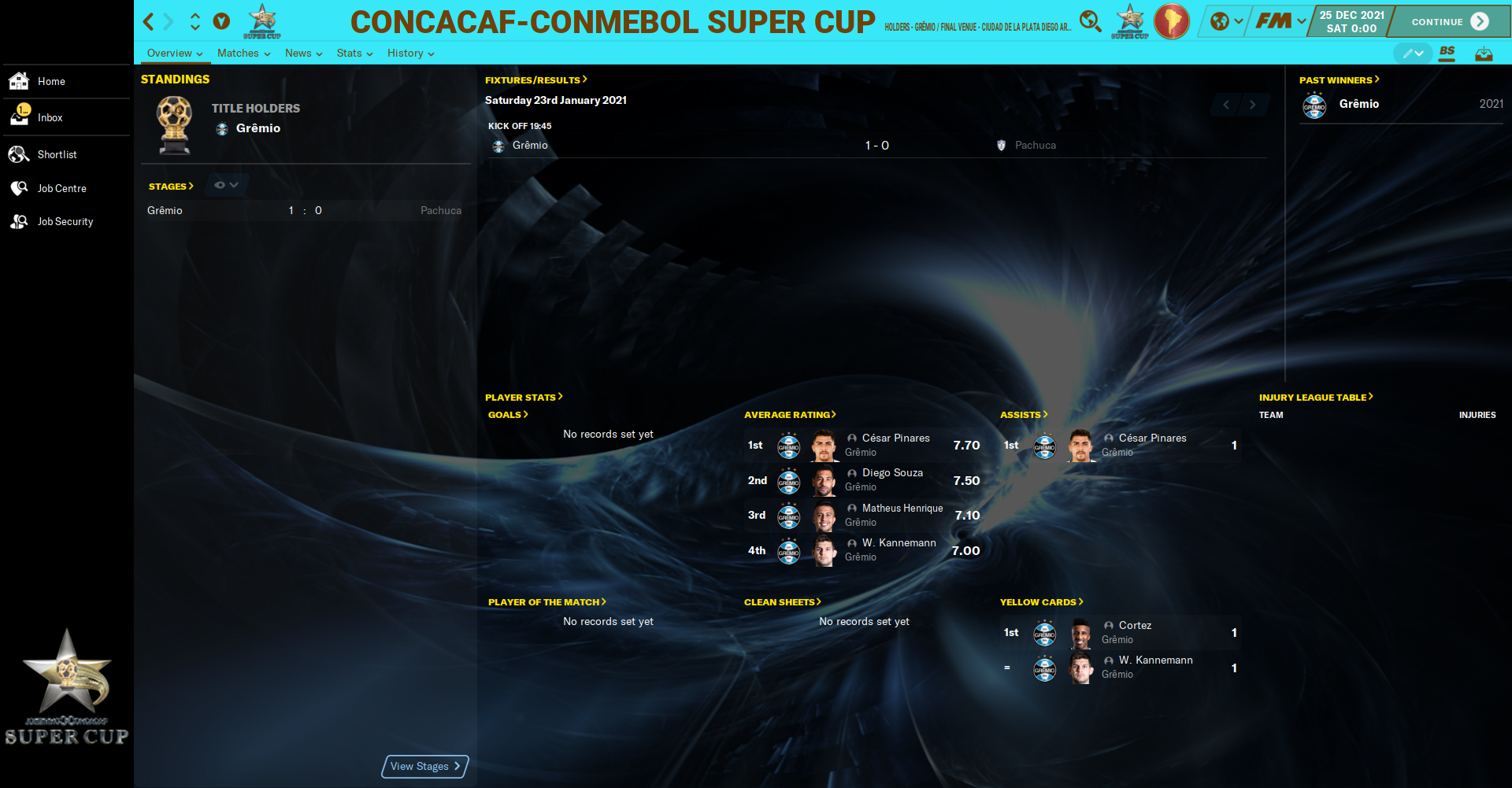 If necessary, make sure to back up your original confederations logos and then drop the files from each folder into the corresponding locations:

- With the editor having some changes made to it in FM21, a lot of my files have proved problematic over the last few months, which is what has delayed the project since December-January. As a result of this, the files which wouldn't verify are presented in XML format until I can get to the root cause of the errors in the editor. They should however still work 100% as intended in the game.

- With the exception of the AFC, CONCACAF-CONMEBOL and UEFA Youth League files, only use 1 of the UEFA Revival files when starting a new game. I've made 50 different UEFA files available for download (along with a file guide) in order to give you as many options as possible as to which format/competitions you'd like to use.

- If the UEFA Cup or CONCACAF-CONMEBOL graphics don't show up in your game, go to Preferences and make sure the "Show unique ID's to assist skinning" box is ticked, as well as "Reload skin on confirm". Then simply add a line of code in each config file for the UEFA Cup graphics, and rename the corresponding graphics to the new ID number.

- If you are starting a new game and controlling a team that is competing in the UEFA Intertoto Cup or FIFA Club World Cup, you're going to need to start your game before June 20th. Activating Norway as a playable nation will allow you to do this.

- The nation rankings are slightly customized to allocate qualification spots, so a couple of nations have been moved up/down in the rankings for personal preference. You can however change the order in your editor ahead of starting a new game if you wish. I would highly recommend not changing the nation rankings if you intend to use the UEFA Youth League, as it could potentially cause errors. As of now I would also avoid editing anything in the XML files, unless you know your way around the editor and those files.

- If your game is displaying the default names for the competitions (i.e. Champions Cup or EURO VASE etc), try downloading the 'Real Name Fix' from the following link:

Alternatively, you can load the desired file up in the editor and rename the competitions in your database if need be.

and anyone else who was kind enough to chip in along the way. Your help is much appreciated, and I couldn't have gotten this project completed without all of you.